Anita Pointer, who scored a string of hits in the 1970s and ’80s with the sibling group the Pointer Sisters, is dead at 74

Anita Pointer, who sang with her sisters to commercial fame as the Pointer Sisters, has died at the age of 74.

Pointer, who previously had treatment for cancer in 2011, died at her Los Angeles on Saturday, New Year’s Eve, according to her publicist Roger Neal with her death attributed to cancer.

The vocal group, which switched between a trio and a quarter, scored hits with songs including I’m So Excited, Jump (For My Love) and the Bruce Springsteen–penned Fire.

Pointer’s death comes just two years after her sister Bonnie Pointer — who co-founded the Pointer Sisters in the late 1960s before going solo in the ’80s — died in 2020. 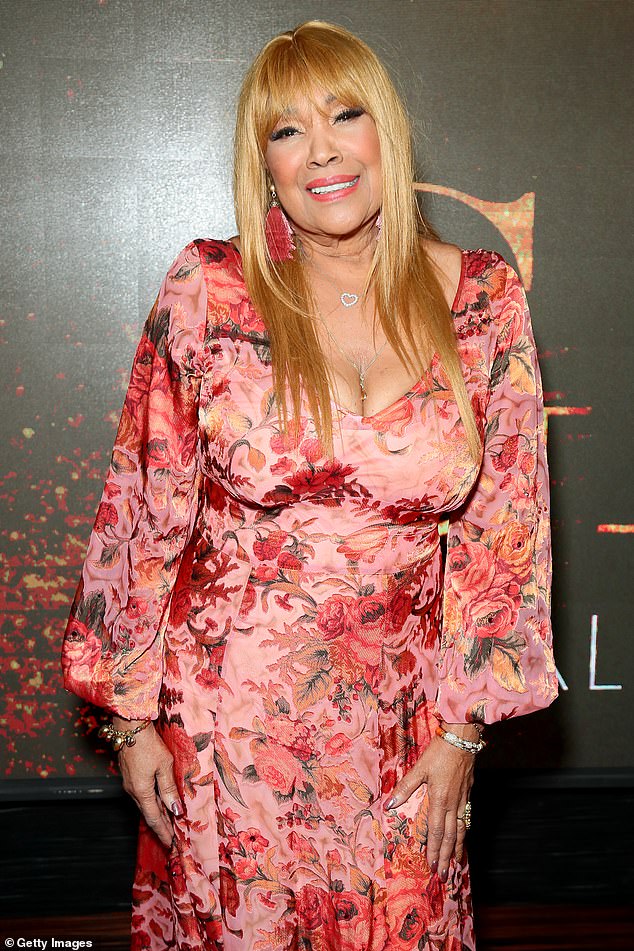 Swan song: Anita Pointer, who sang with her sisters and family members in the popular R&B and pop group the Pointer Sisters, died on Saturday at 74, her publicist announced; seen in 2019 in LA 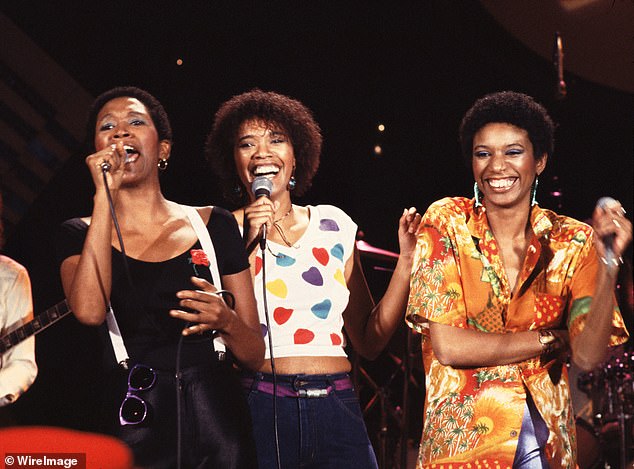 Triple power: After her sister Bonnie and June started a duo in 1969, Anita (pictured right) joined to expand the Pointer Sisters into a trio

The singer–songwriter was surrounded by family at the time of her death.

‘While we are deeply saddened by the loss of Anita, we are comforted in knowing she is now with her daughter, Jada and her sisters June & Bonnie and at peace,’ Pointer’s family shared in a statement. ‘Heaven is a more loving beautiful place with Anita there.’

‘She was the one that kept all of us close and together for so long. Her love of our family will live on in each of us,’ the statement continued, before requesting that fans respect her family’s privacy.

Although the group began in the late ’60s as a duo with Bonnie and June Pointer, Anita soon joined to expand it into a trio, before sister Ruth Pointer expanded the band into a quartet in late 1972, just before kicking off its commercial peak. 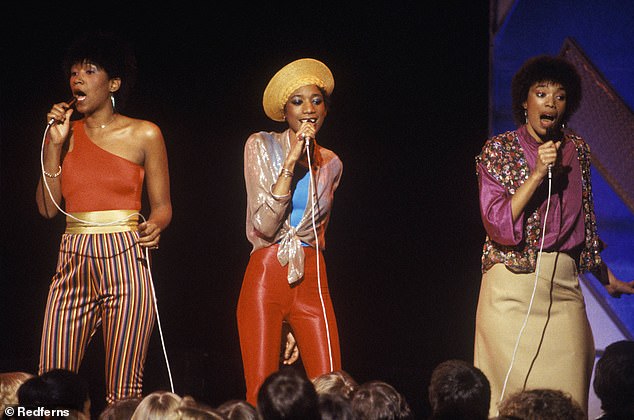 Hitmakers: The vocal group, which switched between a trio and a quarter, scored hits with songs including I’m So Excited, Jump (For My Love) and the Bruce Springsteen–penned Fire; Ruth, June and Anita seen in 1979 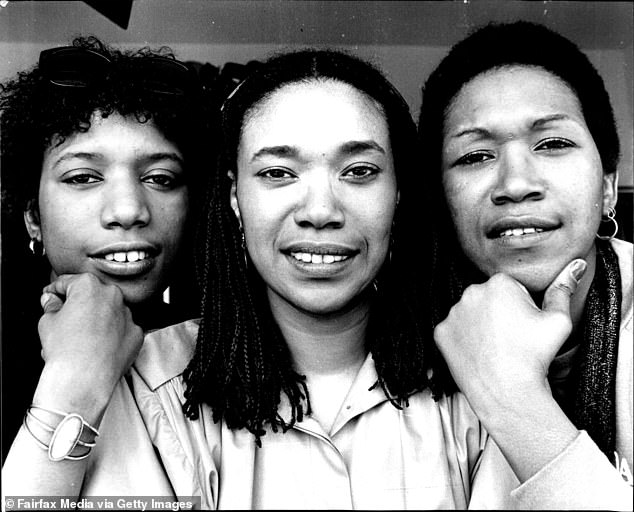 Sisters: The singer–songwriter was surrounded by family at the time of her death according to a statement; Pictured L-R June, Anita, and Ruth in 1980

The sisters grew up singing in the church of their father, a preacher in Oakland, California.

Their debut album in 1973 produced their first hit single, Yes We Can Can.

The group won three Grammy awards over its decades-long career. 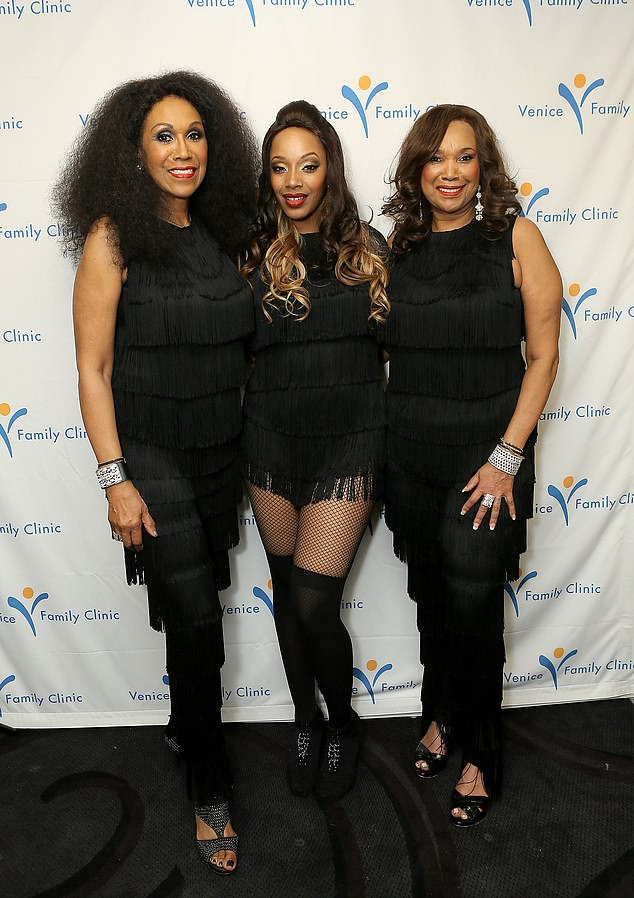 Anita’s tenure with the Pointer Sisters ended in 2015, when she stepped back due to poor health.

In recent years, the group continued performing with Ruth singing along with her daughter Issa and granddaughter Sadako.

In a 2019 interview, Anita gave the new lineup her seal of approval, via Variety.

‘They are doing some great shows and have been all over the world, without me,’ she said. ‘I worked with Issa and Sadako, so they got a good feel for what I do until I had somewhat of a forced retirement, due to health reasons, but Ruthie can still sing so strongly and loves it.’ 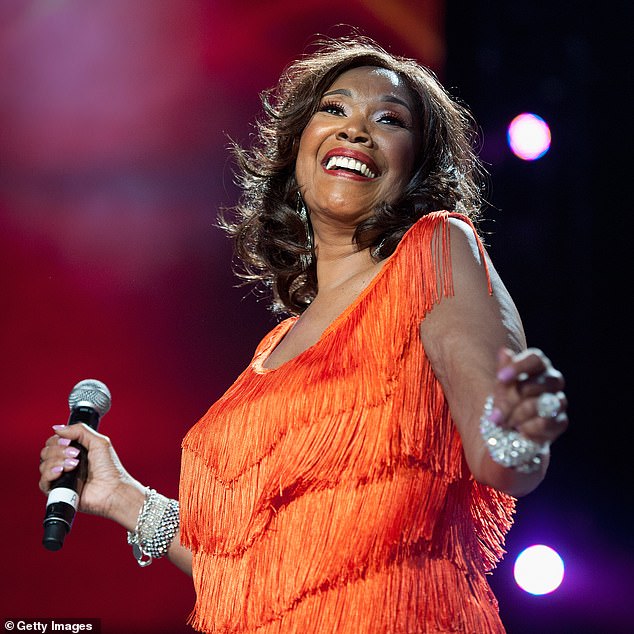 Time off: Anita’s tenure with the Pointer Sisters ended in 2015, when she stepped back due to poor health; seen in 2012 in New Orleans

In a 2019 interview with DailyMailTV, Anita revealed how she recovered from years of heartache following feuds with her sisters and a 2011 cancer battle.

The singer explained how she quietly retired in 2015 following a near collapse on stage.

Anita was performing with The Pointer Sisters at a jazz festival on the Caribbean island of Curaçao in September 2015, when she felt herself gasping for breath and unable to sing the verse to the R&B band’s hit song, ‘I’m So Excited.’

Struck by panic and unable to move, let alone dance, the star felt crippled and was taken by EMTs to the hospital.

Soon afterwards – on her doctor’s advice – she secretly stepped away from music.

Deeply depressed she confined herself to her home and could barely leave her bed as she wrestled with her demons.

She later revealed that the health scare was the result of years of mental and physical trauma brought on by several family deaths and a cancer scare. 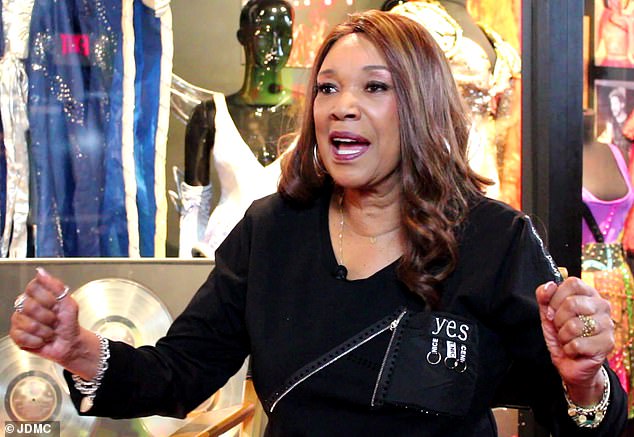 Legend: In a 2019 interview with DailyMailTV, Anita revealed how she recovered from years of heartache following feuds with her sisters and a cancer battle 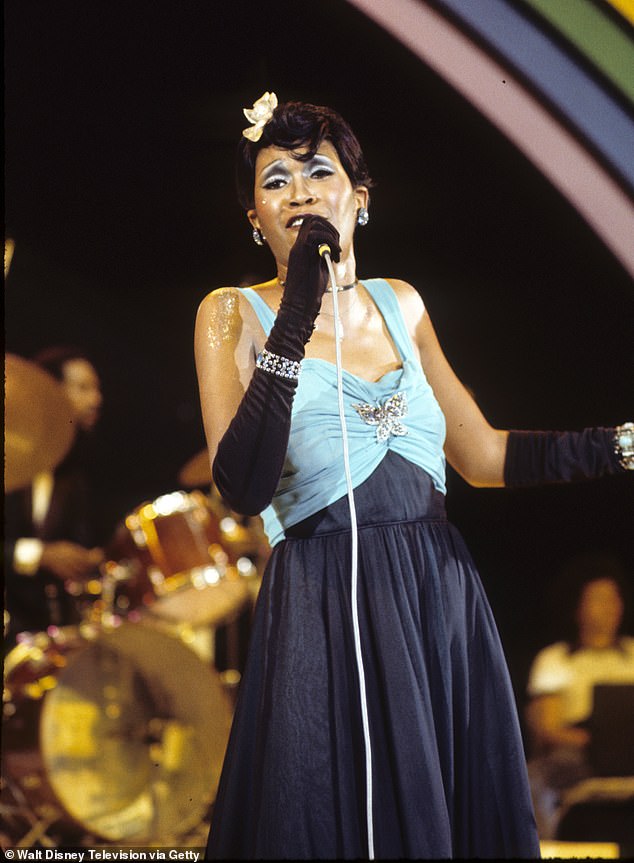 Anita, 71,  rose to fame performing with her sisters June and Ruth in the 70s and 80s as The Pointer Sisters whose hits include I’m So Excited and He’s So Shy

‘When I finally got back to work after the chemo – God that was the hardest thing ever.

‘I was pushing so hard to try and be happy, try and make people happy, and I was killing myself. I was undernourished, dehydrated and had high blood pressure.’

After the incident on stage Curaçao her physician told her she needed to slow down.

‘The doctors told me all your vitals are to the extreme. You need to stop, because you are killing yourself. I cried and cried.

‘I had to finally accept the fact I was getting older, that I cannot push it and I had been through so many tragedies that I had to stop.

‘When I got back to California I went to bed and stayed in bed for weeks, maybe months. 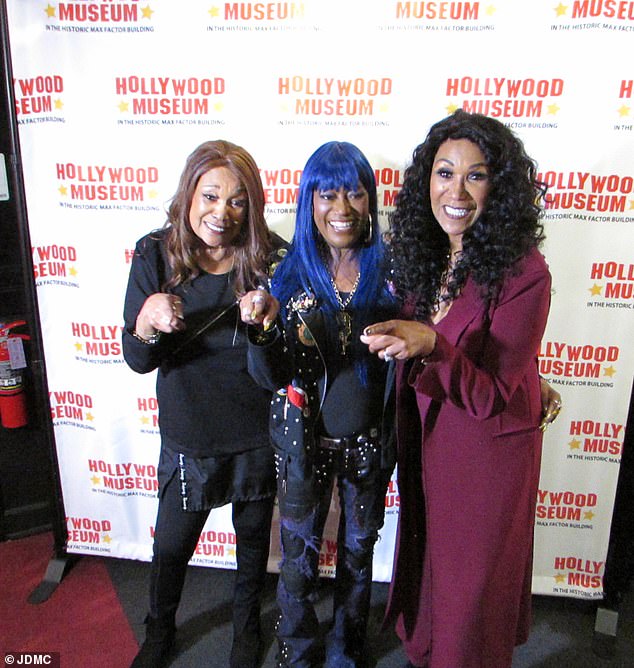 ‘I was just a total mess and I could not function. My managers were encouraging me to get therapy and I finally did.

‘I found a psychiatrist, psychologist and a neuro-feedback doctor; between the three of them I really started feeling like I wanted to live.

‘It really helped to just let things out, talk about things that are bothering me and confront them.’

Anita admitted that the loss of her daughter Jada, who died in 2003 of pancreatic cancer, was the biggest blow. Her daughter inspired one of the Pointer Sisters’ most popular songs named after her.

‘I started feeling – was this worth it? I worked so hard to get us a better place to live and get her into schools. My mother really took care of her, because we would always be gone.

‘And I remember her crying and asking me not to leave, “Mama please don’t go”. But I had to make money, pay the bills, and work. And I did love what I did, but I lost out on so much of her life. We had talked about all the stuff we were going to do when I got older, and how she going to take care of me. 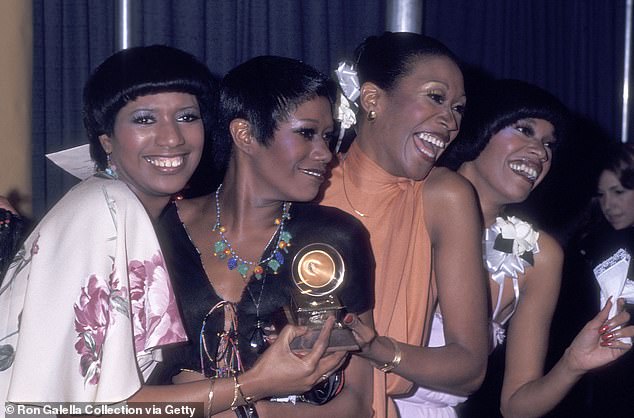 ‘I will never get over it. I cry almost every day for my baby. I loved her so much, she was my only child. And I think about her all the time and I am very angry with the world for taking my baby.

‘I just feel like something could have been done. It has put me in a place where I will be suffering for the rest of my life, because I will never get over this.

‘I hope there is something that I can find that will bring me some kind of peace for the rest of the time I am here.’

Her daughter’s death came three years after her mother, Sarah, who had been key in helping raise her daughter, passed away.

Tragedy struck again in 2006, when Anita’s sister June, one of first members of the singing group, passed away from lung cancer aged just 52. 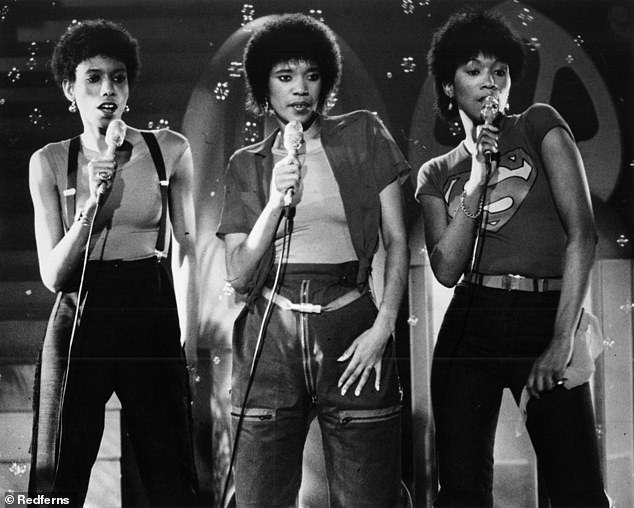 June’s funeral also prompted the public airing of a bitter family feud in which sister Bonnie claimed Anita and other sister Ruth and brothers Aaron and Fritz had ignored her burial wishes.

Bonnie also admitted her sisters did not let her ride in the family car at the funeral.

Anita and Ruth responded that Bonnie had demanded to be let back into the group and was upset that she had not been allowed to rejoin it, and that June had left no instructions for her burial.

The long therapy and healing process during her four-year break made Anita realize that working can help quash her pain and anguish but only if she channeled it properly.

‘All my adult life all I knew was performing. I pushed myself. My motto was I can always do one more show,’ she said in 2019.

‘I was always pushing my talent to the limit – performing shows, traveling, managing a family, the band and then writing songs in between it all. 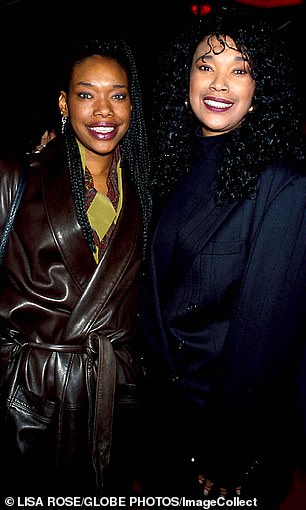 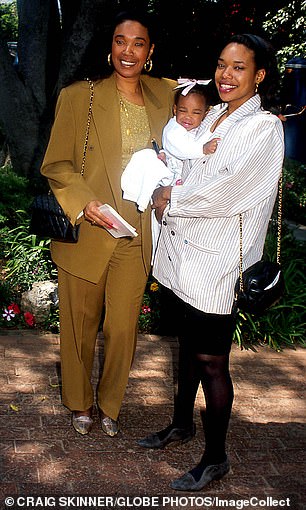 Anita said her biggest loss in life was her only daughter Jada, who died of pancreatic cancer in 2003. Jada was the inspiration for The Pointer Sisters’ hit song of the same name

‘Under doctor’s care and therapy, I refocused my brain. It had got to the point when I was on the road, I was physically sick and broken, without passion.

‘It got to the point where I was so lost that I could not even bare to listen to music anymore. If I listened to music then I would just cry.’

In 2019 Anita had found her voice again thanks to a chance meeting with Hollywood Museum director Donelle Dadigan last year.

The pair began discussing an exhibit after the performer revealed how she had kept so much from the band’s history.

After agreeing to staging an exhibit at the famous venue, at the former Max Factor Building on Hollywood and Highland in LA, Anita’s outlook changed forever.

‘I guess I did need those four years away, thank God I met Donelle Dadigan, who kind of saved my life.

‘She brought everything back to life that I had been working on for decades. It really made a difference being able to see all we had done this way. I thank the Hollywood Museum with all my heart.’

Anita said that working on the display, featuring hundreds of costumes and memorabilia pieces, had been a key factor in her recovery along with three years of therapy.

Back in 2019 Anita reflected that there had ‘been a lot of healing’ between herself and the co-star sisters.

‘Most of the troubles from the past are behind us. They usually stem from the men in our lives – that is where the troubles comes.

‘It is hard to talk about and understand what happens,’ she said.

‘They persuade the women to do things and it sort of clashes with the sisters. We are doing pretty good right now.’ 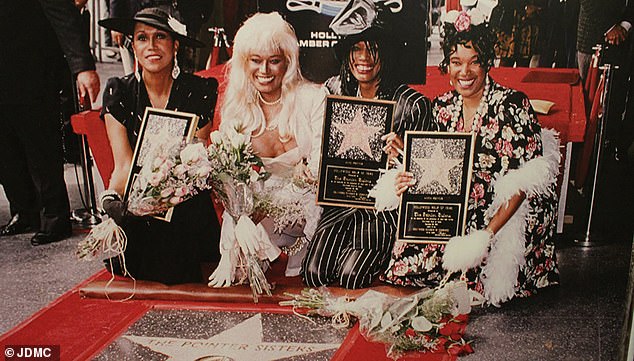