Ant McPartlin amazed pub staff as he stopped for a selfie ahead of I’m A Celebrity’s launch show on Sunday.

The TV presenter, 44, stopped for a photo on Friday with manager Jackie at The Mulberry in Conwy Marina, Wales.

Ant’s shock appearance comes as the show’s celebs got to grips with their first trial, as they were spotted abseiling down a cliff in the area. 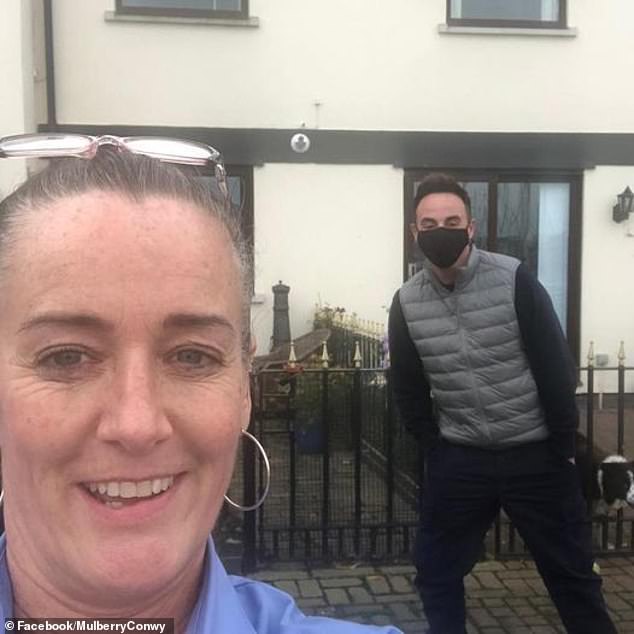 A nice surprise: Ant McPartlin, 44, amazed staff at The Mulberry in Conwy Marina, Wales, after he stopped for a socially distanced selfie on Friday

He stood in the background of the selfie, wearing a black tracksuit and a grey body warmer.

Taking to Facebook, the pub shared the snap and said: ‘Now there’s a nice surprise at The Mulberry today. Casually working and look who has time to take a selfie with our manager Jackie. It’s only Ant from I’m A Celeb.’

Pubs have been allowed to re-open in Wales following the 17-day ‘firebreak’ lockdown with groups of four people from different households allowed to meet up in cafes, pubs and restaurants.

Ant’s outing comes as he and co-host Declan Donnelly prepare to host the launch of this year’s I’m A Celebrity in Wales for the show’s first ever UK-based series. 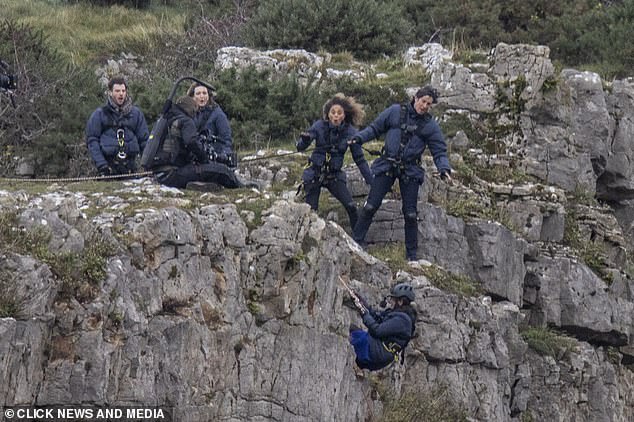 Terrifying: On Friday this year’s celebrities were seen getting to grips with their first ever trial as they were tasked with abseiling down a cliff in Anglesey 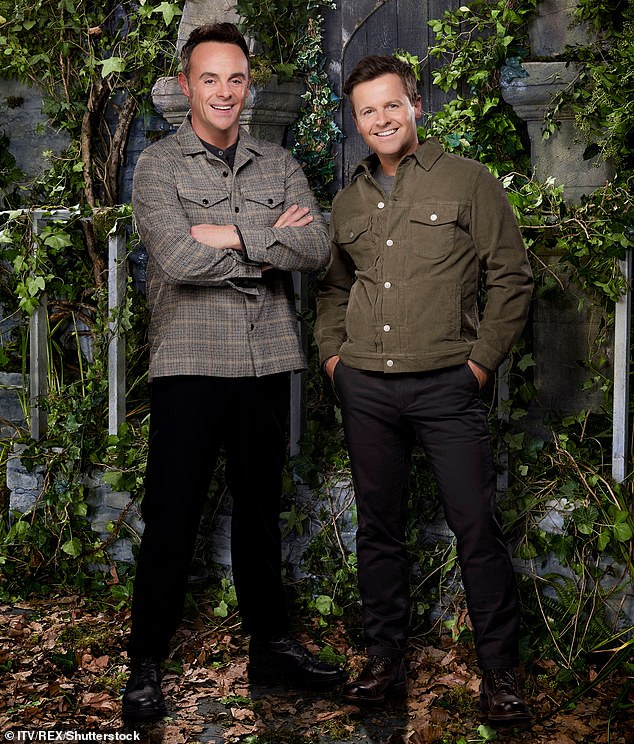 Moving to Wales: Ant and co-host Declan Donnelly (pictured) are preparing to host the launch of this year’s I’m A Celebrity in Wales for the show’s first ever UK-based series

Helicopters were spotted near Gwrych castle on Friday afternoon, as it was revealed that starts will endure 50mph gales and torrential rain when the show returns for its 2020 series.

This year’s celebrities were then seen getting to grips with their first ever trial as they were tasked with abseiling down a cliff in Anglesey, Wales, ahead of arriving at Gwrych Castle in Abergele, where they will be staying for the duration of the show.

Jessica Plummer looked terrified as she squealed while watching her fellow contestants Giovanna Fletcher and Vernon Kay take on the challenge.

Broadcaster Victoria Derbyshire, 52, and Radio 1 DJ Jordan North, 30, could also be seen preparing to climb down the cliff with the latter throwing up while putting on his harness. 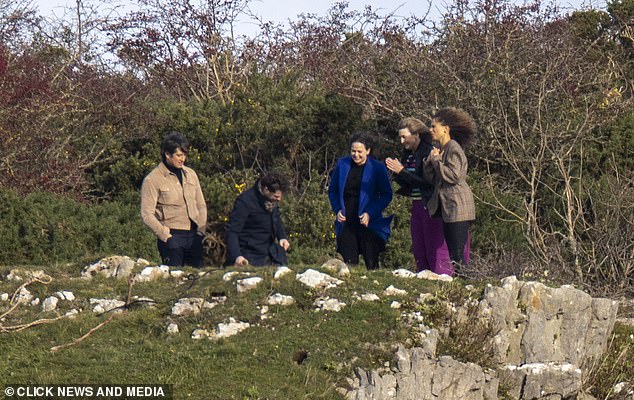 Worried: Stars Jessica Plummer, Jordan North, Giovanna Fletcher, Vernon Kay and Victoria Derbyshire were seen arriving at the sight of the abseil in their pre-castle attire 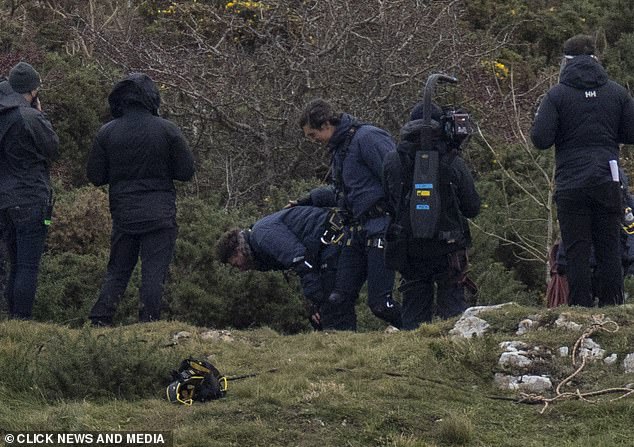 Scared: They were then seen changing into the their protective suits, with Jordan clearly struggling with the challenge as he was sick before the start of the trial

I’m A Celebrity’s film crew were seen wearing protective face shields and masks for the duration of the shoot so that they complied with strict COVID-19 restrictions that have been put in place.

After weeks of builders working round-the-clock to restore crumbling Welsh landmark Gwrych Castle, I’m A Celebrity revealed the first look at the camp, on Friday.

This year’s stars will experience the most brutal living conditions in the show’s 20-year history, after ITV relocated from Australia to Wales due to the coronavirus pandemic. 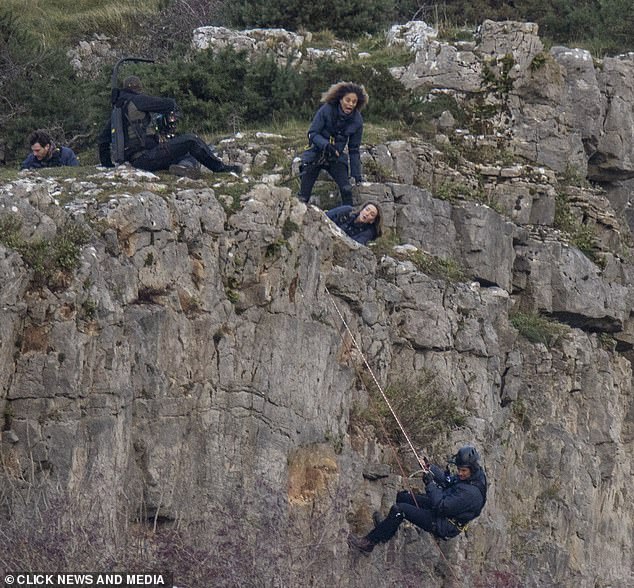 Scary: I’m A Celebrity’s Jessica Plummer squealed in terror as she and her fellow stars abseiled down a cliff in the first petrifying trial, which fans will see on Sunday

MailOnline was given special access to the show’s brand new set located inside the eerie Gwrych Castle, which ITV hired for six weeks costing £1million after COVID-19 ruled out the usual setting in Australia.

The ten contestants will sleep on rusty old beds, covered by a newly installed plastic roof, with only the campfire located inside the adjoining living quarters providing any heat.

If the campmates need the toilet at night, they have to wander outside in the Baltic conditions to visit the Privy, a battered old shed, which has replaced the traditional dunny.

And the usually pampered celebrities will bathe in a tiny tin bath and wash their hair using water from an old watering can hanging above – their modesty covered by a mouldy shower curtain. 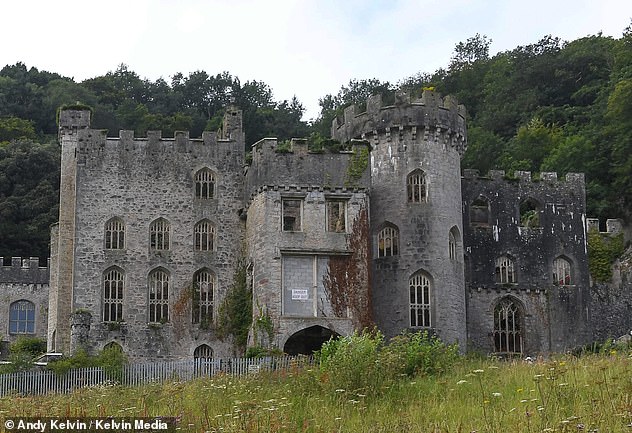 And so it begins: This year’s stars will experience the most brutal living conditions in the show’s 18-year, as they move to the crumbling Gwrych Castle 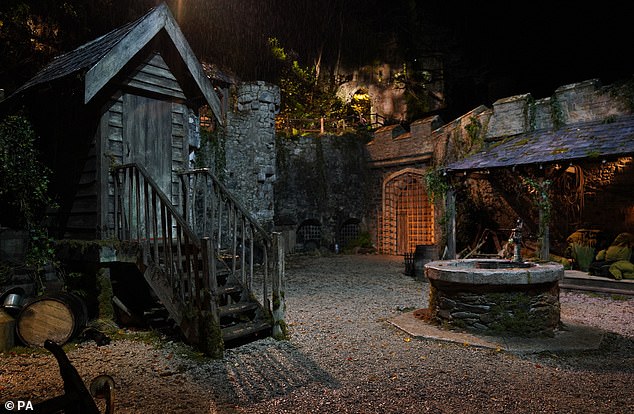 Dingy: MailOnline was given special access to the show’s brand new set located inside the eerie Gwrych Castle, which ITV hired for six weeks costing £1 million

ITV announced an extreme COVID Management Plan to ensure the series runs smoothly, including the celebrities being tested every three days and crew members wearing proximity buzzers, wear masks and get temperature checks on arrival.

The celebrities have been isolating for two weeks ahead of their arrival.

ITV Studios Director of Entertainment, Richard Cowles, said: ‘Everyone on the production team has worked incredibly hard to bring I’m A Celebrity to Wales and a massive part of making that possible has been developing our protocols around COVID.’ 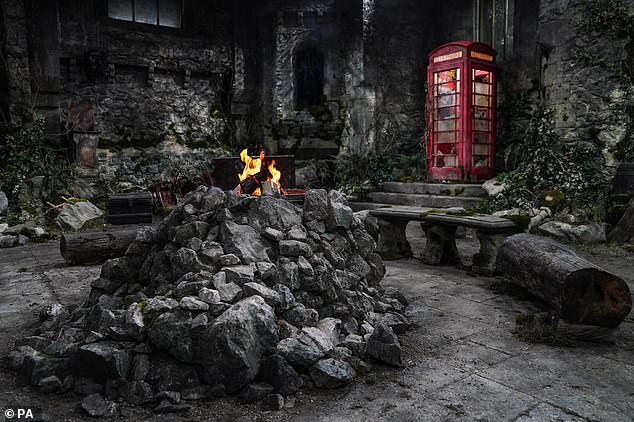 Not-so cosy: The contestants will sleep on rusty old beds, covered by a newly installed plastic roof, with only the campfire located inside the adjoining living quarters providing any heat

‘We have worked with ITV’s Independent Chief Medical Officer Dr Paul Litchfield, ITV’s Health and Safety Department and our own health and safety and medical teams to keep everyone connected with the production, both in front of and behind the camera, as safe as possible.’

Dr Paul Litchfield added: ‘Those involved in I’m A Celebrity are used to working safely in extreme and difficult environments.

‘The procedures and protocols developed aim to provide defence in depth against the coronavirus, applying industry best practice while always adhering to government and local guidelines.’ 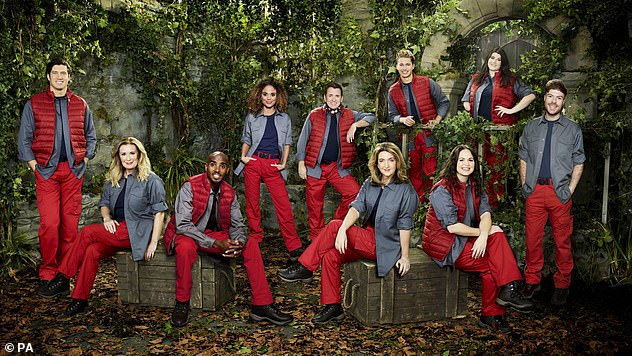 Adapting: The show has had to adapt the entire format as they looked for new ways to kick-start the entrance of the celebrities at the new location

The 2020 series, which starts on Sunday, is expected to last 20 days – two shorter than normal.

I’m A Celebrity Get Me Out Of Here returns on Sunday at 9pm on ITV.

Claim to fame: The most successful British track athlete in Olympic Games history

Phobias: Any animal that moves

Biggest misconception you want to dispel in the castle: It will be nice for people to see me doing something other than running

Role in the camp: Cook

Miss most: Coffee, my wife and children

Phobias: Human faeces. If I see one, it is over! I am hoping the camp toilet will be enclosed

Biggest misconception you want to dispel in the castle: Nothing. I don’t think I am that interesting

Role in the camp: Person who will muck in with anything

Miss most: My family and routine at home

Biggest misconception you want to dispel in the castle: People think I am glamorous as I have played Liz for so long but I am not

Role in the camp: Cleaner

Miss most: Dogs and my husband, Jon

Dream campmate: Ricky Gervais – he would keep us all going

Biggest misconception you want to dispel in the castle: People see me with sparkles and fake tan but nobody knows what I am like

Role in the camp: Keeping spirits up and the cleaner

Miss most: My warm and comfy bed

Dream campmate: Any celebrity with an intriguing background

Biggest misconception you want to dispel in the Jungle: I think I have always been the same throughout my career – so I don’t have any.

Role in the camp: Person to keep spirits up.

Miss most: My family.

Dream camper: Anybody who has won the Super Bowl!

Phobias: I am not a fan of spiders or confined spaces and I don’t know what I am going to be like when I get there!

Biggest misconception you want to dispel in the castle: I don’t think I have any as people just know me as the news and current affairs person!

Role in the camp: Shoulder to cry on.

Miss most: My boys, husband, dog and Mum.

Dream campmate: Madonna, Gary Lineker and Jamie Oliver to cook for us. I think you could have some really geeky chats with them!

Claim to fame: Author and podcaster

Phobias: Heights. My legs go wobbly and you can’t rationalise it

Biggest misconception you want to dispel in the castle: I am not that controversial so nothing

Role in the camp: Mum, friend and the giver of hugs

Miss most: My husband, Tom, and my three children

Dream campmate: The Queen, Judi Dench and Ant Middleton so he can help us with all the survival skills

Phobias: Arachnophobia, fear of heights –just about every phobia

Biggest misconception you want to dispel in the castle: It will be nice for people to see me for who I am rather than my EastEnders character

Role in the camp: Chatterbox and little sister

Miss most: My daughter. It’s going to be the longest we’ve been apart

Dream campmate: Denzel Washington would be awesome. I would listen to every word he said

Phobias: It’s just easier to say what I am not scared of. I have so many phobias

Biggest misconception you want to dispel in the castle: On my Radio 1 show, I am always bubbly and energetic but everyone has down moments too, so it will be nice for people to see what I am really like

Role in the camp: Entertainer and the tidy up person –I love a tidy house

Miss most: A nice cool pint of Guinness

Dream campmate: Barack Obama and Liam Gallagher. He would be great entertainment value

Biggest misconception you want to dispel in the castle: I don’t want it to focus on my disability

Role in the camp: Cook/shoulder to cry on

Miss most: My boyfriend, food and my cats