‘Lord Sugar made a huge mistake!’ The Apprentice viewers fume that the wrong person was fired after Kevin D’Arcy’s elimination – as the girls are ridiculed for ‘shocking’ maths skills

Viewers of The Apprentice took to Twitter in their droves after Thursday night’s episode to give their thoughts on the latest action in the Boardroom.

And the overwhelming feeling among fans of the show was that the wrong person – Kevin D’Arcy – was eliminated after the chaotic Bao Bun challenge Lord Sugar set them.

Many watching at home also ridiculed the girls as they failed to work out basic maths when ordering the ingredients for their buns – leaving Karen Brady to point out their glaring flaws. 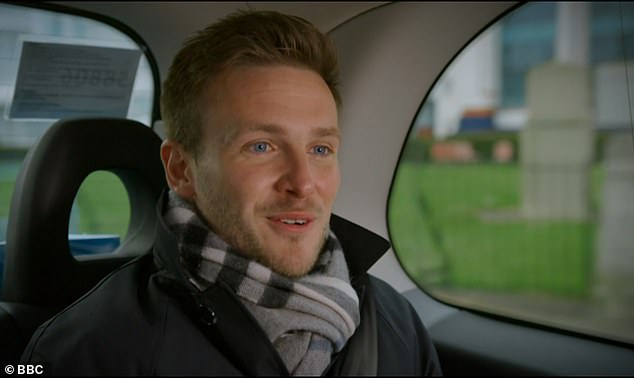 Opinions: Viewers of The Apprentice took to Twitter in their droves after Thursday night’s episode to give their thoughts on the latest action in the Boardroom (pictured is Kevin D’Arcy who was eliminated)

This week’s episode saw the remaining candidates tasked with creating and selling Bao Buns after meeting Lord Sugar in Hutong in The Shard.

The candidates had to manufacture two types of bun – selling savoury bao buns to the public and pitching a bespoke sweet bun to a corporate client.

On the men’s team, Bradley was decided as the team project manager, while Megan led the girls’ team as they decided that she had ‘the most experience in food’. 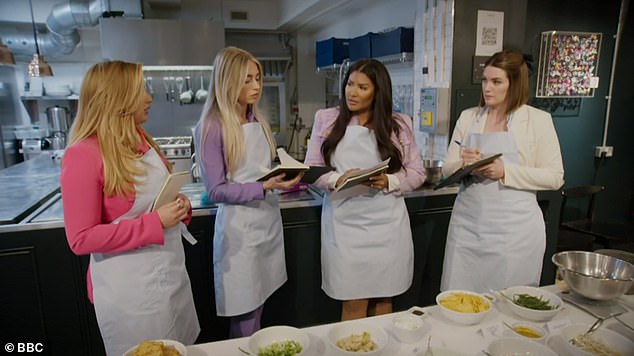 Funny: Many watching at home also ridiculed the girls as they failed to work out basic maths when ordering the ingredients for their buns – leaving Karen Brady to point out their glaring flaws

Megan’s team went for a fish bao bun as they teamed basa and katsu sauce, while Bradley’s opted for a more traditional chicken and chorizo bun with a harissa paste.

At the end of the challenge the boys team lost and Lord Sugar told the candidates that ‘with regret’ he had decided to fire Kevin, after he appeared to put more focus than revenue instead of profits. 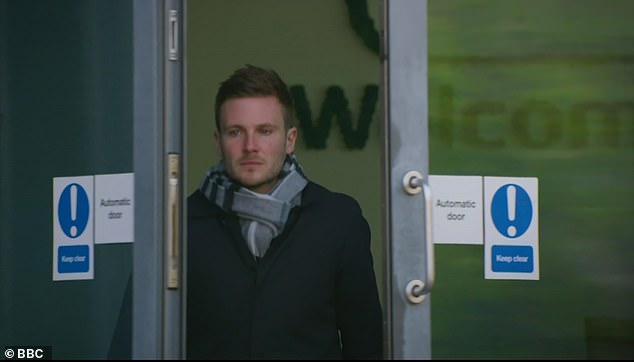 Bye: And the overwhelming feeling among fans of the show was that the wrong person – Kevin (pictured) – was eliminated after the chaotic Bao Bun challenge Lord Sugar set them

A second said: ‘Kevin got shafted. Bradley should have gone. #theapprentice.’

A third stated: ‘Lord Sugar mate that was the wrong decision poor Kevin!! Bradley should have gone home.’

‘Not Kevin #TheApprentice’, simply added another.

Another said: ‘It’s ironic that two of the best candidates were out of The Apprentice today. Clearly, brains don’t count for much in business these days. 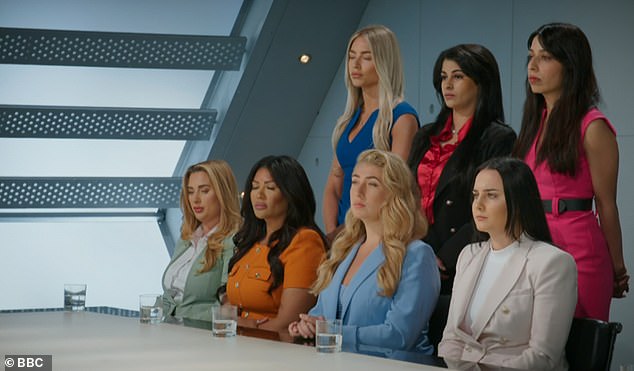 Winners: The girls team was successful overall and won the task after making the most profot during the task

Someone else wrote: ‘Wrong person was fired tonight! @Lord_Sugar made a huge mistake firing Kevin!! The other 2 were a lot worse! At least Kevin tried to actually get those disgusting bao buns sold….! #TheApprentice.’

In addition those watching the second episode were quick to comment on the poor maths skills of the girls team as they ordered the ingredients for their buns on the cooking team – headed up by hair salon owner Rochelle Anthony.

One wrote in reaction: ‘Wow, the girls team can’t even do basic maths. Maybe Rishi was right!’

Another said: ‘Maybe Rishi has a point about maths… Shocking #TheApprentice

A third wrote: ‘OMG @bbcapprentice is getting worse each year I am sure! Where do they find these candidates………….it’s basic numeracy surely 45×400 …..use the  calculator on your phone @Lord_Sugar.’

A fourth said: ‘Someone get the girls a calculator please!’

But despite their poor maths it was the boys team who lost and Kevin who was eventually fired.

Asked whether he has any regrets about his time on the process, Kevin said: ‘I think I would have tried to put myself on the corporate team for the bao bun task, that’s where the ship sank, and I think those guys steered it straight for the iceberg.

‘I was fired because I wasn’t able to deploy the lifeboats quick enough. I clearly watched Titanic over Christmas!

‘As an accountant cooking is probably the furthest thing away from what I do day in, day out. Brad said he was a great cook, then put himself on the opposite team…’ 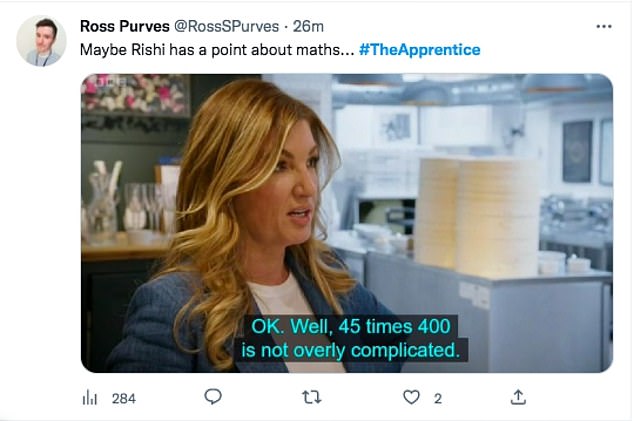 Thoughts: In addition those watching the second episode were quick to comment on the poor maths skills of the girls team

Discussing his experience on the show, the accountant said: ‘Looking back, you remember the best bits and the fun times. You remember how much you laughed and got on with the other candidates.

‘Overall, I think I met some amazing people. People I perhaps wouldn’t meet in my normal life, and I think being one of the slightly older contestants (32), it was interesting to meet some of the younger candidates and understand what they’re into and what their interests are.’

Discussing the challenge itself, Kevin added: ‘The market was fun. We had this thing when we steamed a new set of buns, we’d have a countdown ”three, two one…fresh bao buns!”. 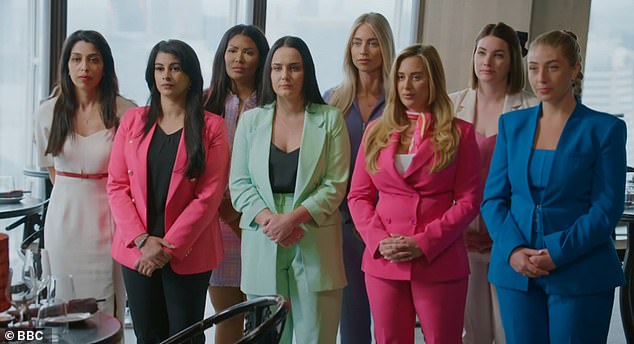 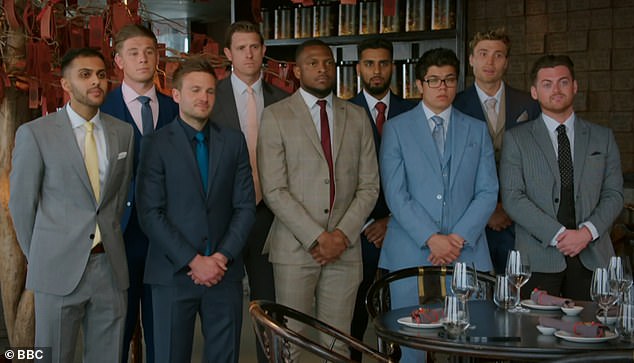 Briefing: The groups met Lord Sugar in Hutong in The Shard to be briefed on their challenge

‘That stopped the entire market, and everyone would come over to see what was going on.

‘I think Greg in the chef suit was a favourite too. If he has a career in politics, that’s definitely something he’ll look back on and regret. But overall, he was the best man for the job. There were plenty of laughs along the way.’

Kevin also revealed that his next focus will be to tie the knot with his fiancée Alana on the Amalfi Coast in April.

He also revealed that he would like Bradley Johnson or Reece Donnelly to win the process. 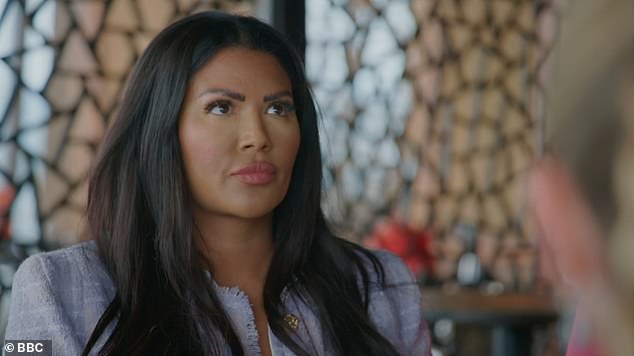 Leader: Megan was voted team leader for the girls, as she made the decision to go for a fish-based bao bun 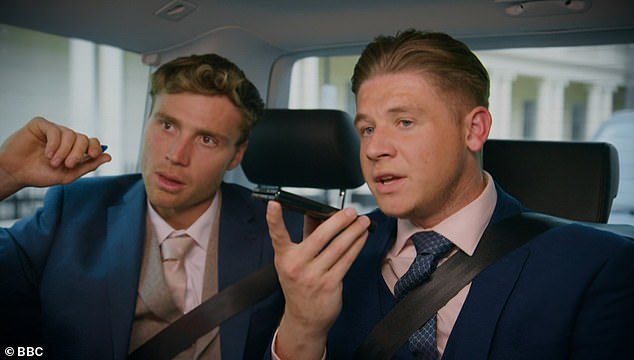 Something different: Despite working in construction, Bradley was keen to take on the project managing role for this task as he showed interest in the food industry