The caramel-haired beauty has jetted away with her new boyfriend, DJ, Producer and Tour Manager, Josh Newsham.

And he wasn’t just a handsome face – because Arabella, 29, roped him into taking all her Instagram shots for her as she topped up her tan in the sunshine. 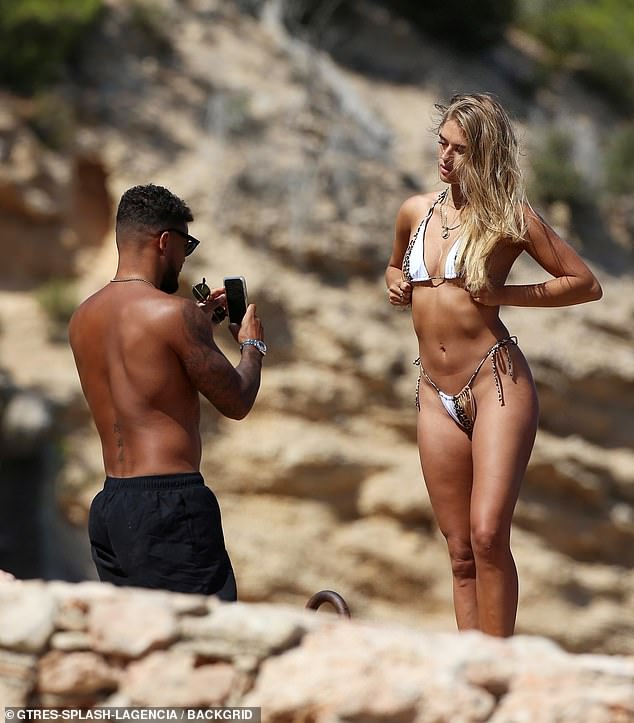 Look away Wes! Love Island’s Arabella Chi wore a tiny bikini in Ibiza with her hunky new man Josh Newsham who she roped into becoming her personal photographer on Saturday 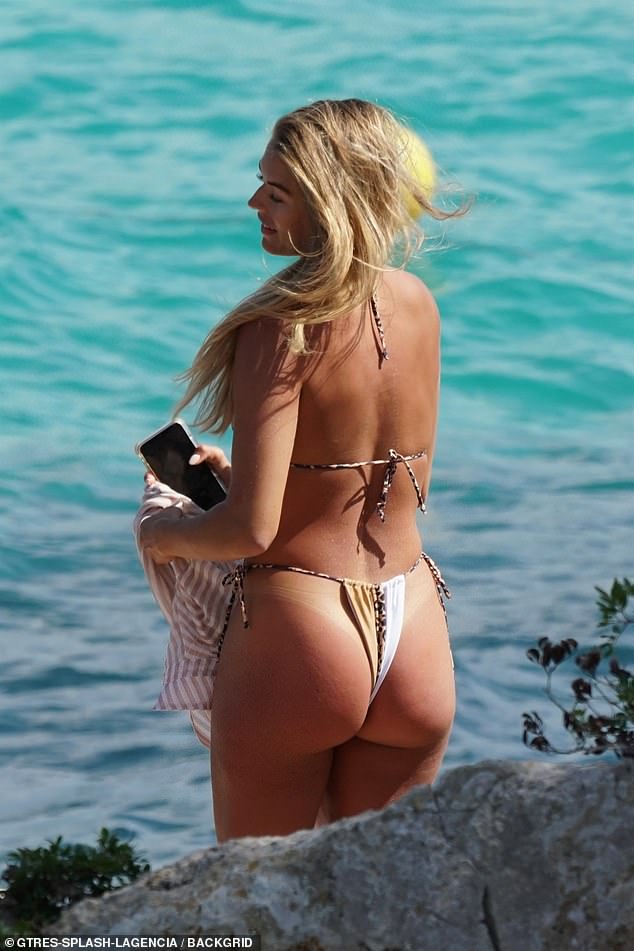 Ouch! Arabella showed off her sunburned bottom in her tiny bottoms

Arabella looked incredible wearing the tiniest string bikini which had leopard print and blocks of white running throughout.

It came with tiny bottoms which showed off her bottom as she enjoyed her day in the sun.

As she lay down to cuddle her man, Arabella showed off some serious tan lines from the day before. 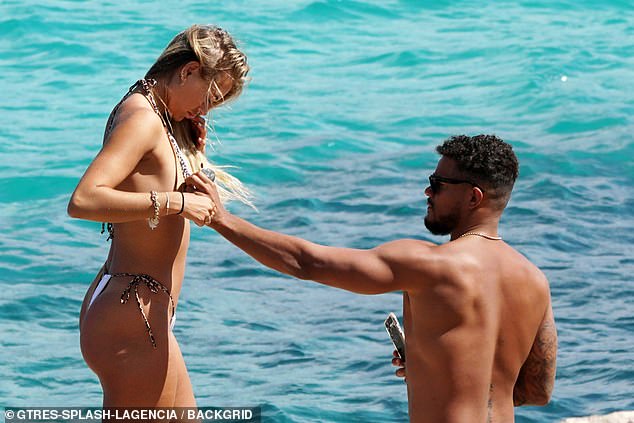 What a gent! Arabella’s secret new DJ, Producer and Tour Manager hunk adjusted her bikini top for her while she got more social media shots, as she stood on top of a rock 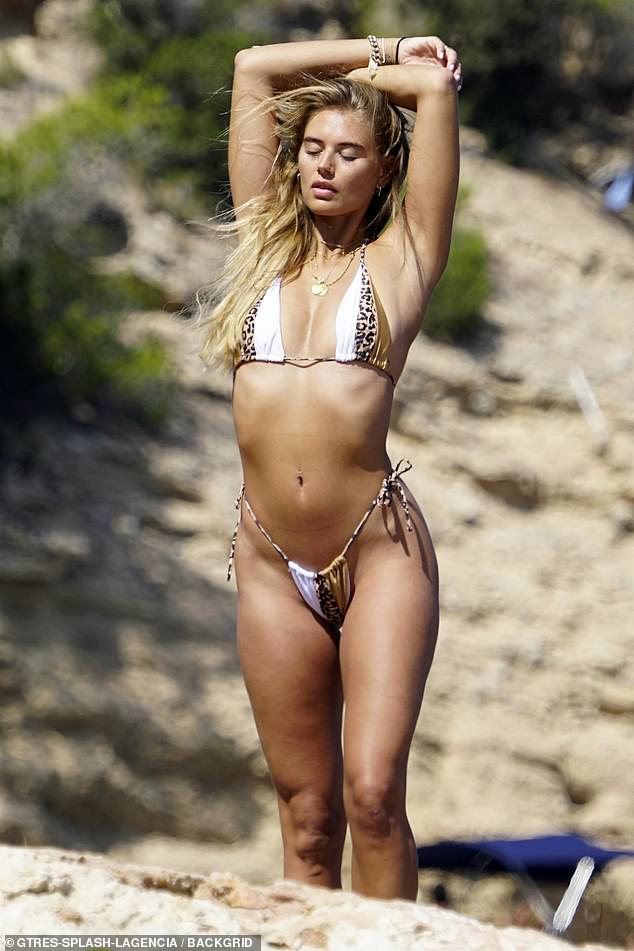 Golden girl: Arabella showed off her incredible figure in her white and leopard print string bikini 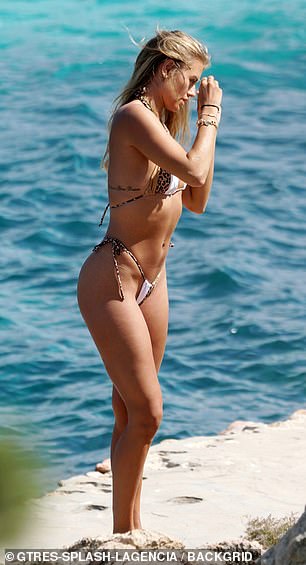 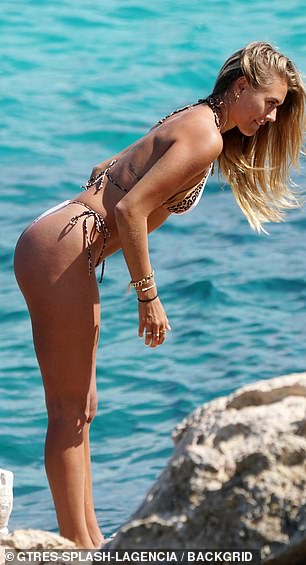 How does she do it? Arabella looked incredible from every angle as she worked her magic on top of a rock 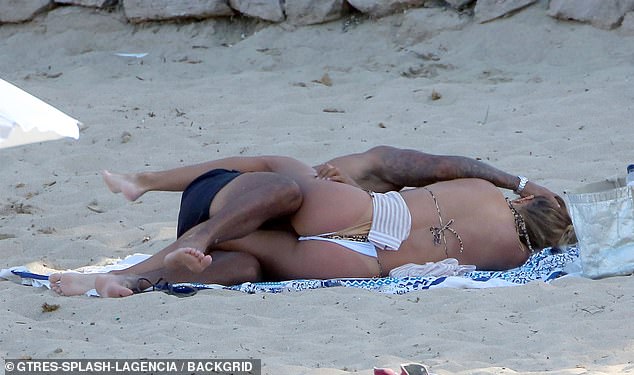 Into one another: Arabella and Josh couldn’t keep their hands off one another

Josh later adjusted her bikini top for her while she got more social media shots, as she stood on top of a rock.

When their day on the beach came to a close, Arabella slipped into a striped cotton shirt and crisp white shorts.

Arabella could be seen checking her phone and all the photos that Josh had taken for her. 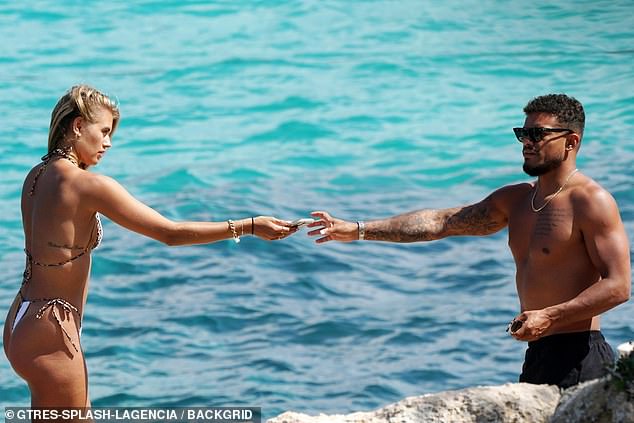 Can you just take one more? The stunner asked Josh to take a few more snaps for her 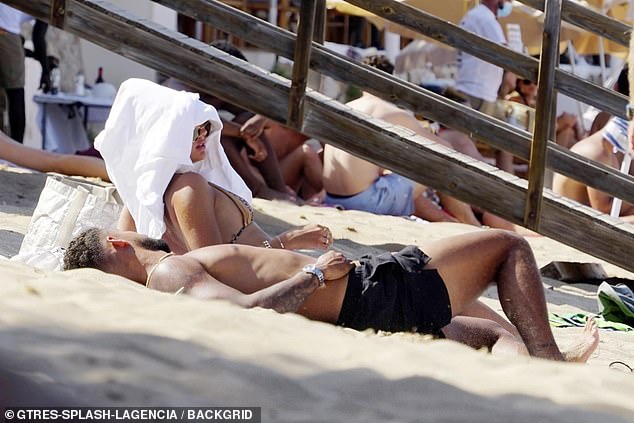 Sun safe: She placed her top over her head to provide herself with a little shade 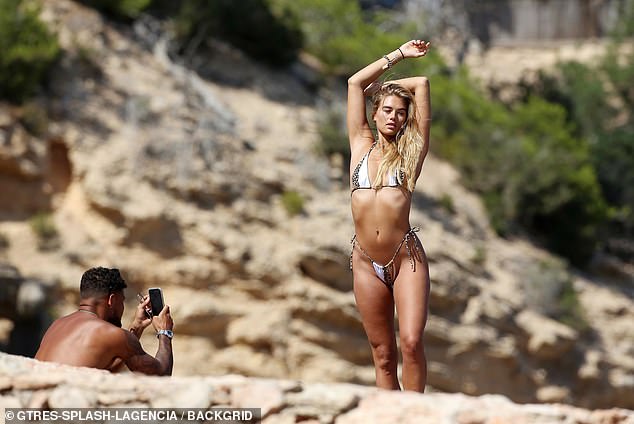 Arms up! Her boyfriend knew all the best angles to get the best shot

Things appear to be hotting up with the new couple as Josh placed his arm around her while walking off the beach.

They later headed off for a drink and a bite to eat and appeared to be very much in love when it came to their body language. 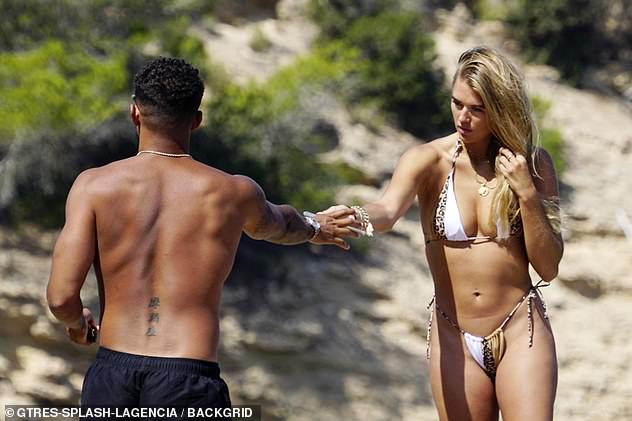 Getting it right: Arabella and Josh were handing the phone back and forth as he became her Insta-husband for the day

Bronzed: She looked like she was having a great time on her romantic break away

The pair had been dating for nine months but were said to have ‘grown apart’ and had become more aware of their six-year age gap ahead of their split.

Wes moved out of the home he shared with the model so they didn’t have to isolate together under lockdown rules.

He is now living with pal and former Love Island star, Josh Denzel.

A source told The Sun at the time: ‘It’s all over. They started to grow apart. They want to remain civil with each other and hope to remain friends.’ 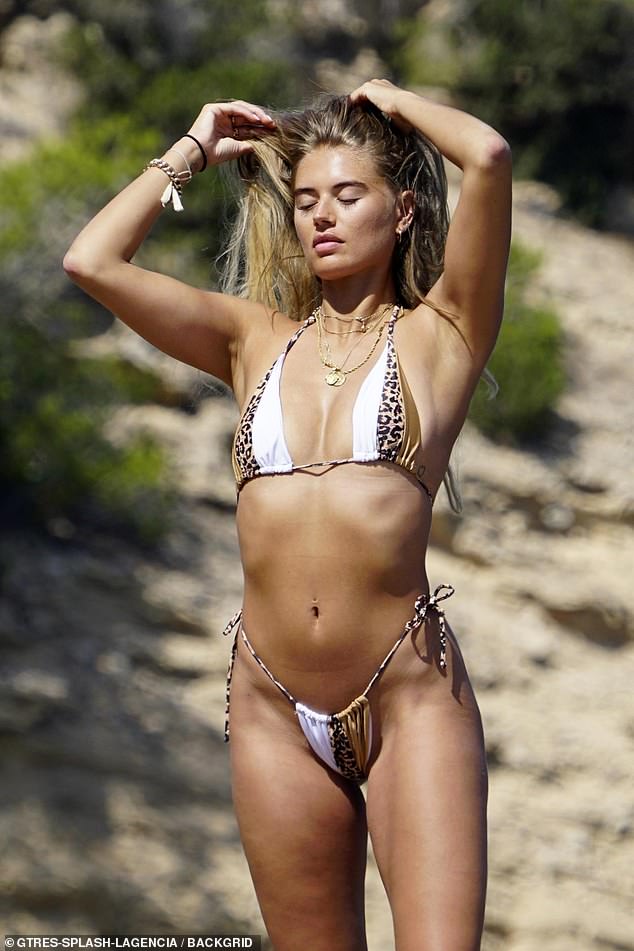 Beauty: Arabella closed her eyes as she basked in the sunshine 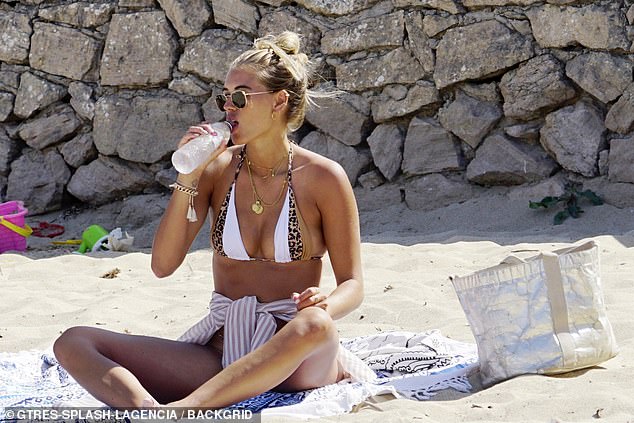 Hydration station: She later sat back down in the sand as she refreshed with some water 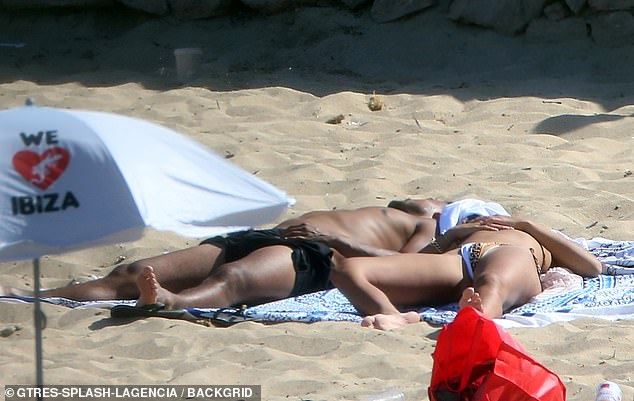 Close: The couple lay side by side as they enjoyed their getaway 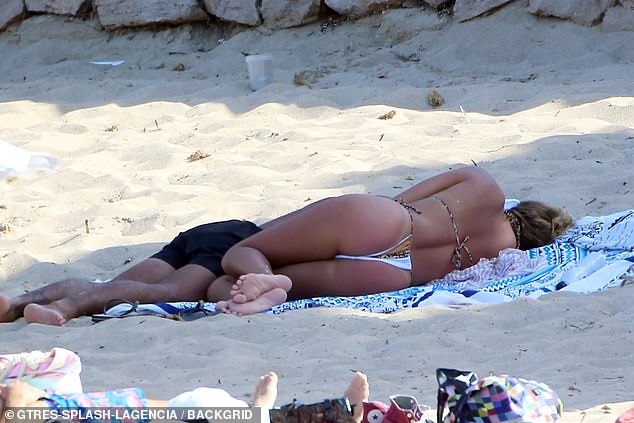 Cute: They lay on patterned blankets in the sunshine

The news likely came as a shock to their fans, as just a week before they called it quits, the pair revealed that they were enjoying their time in lockdown together.

Speaking to OK! Online, Wes said: ‘It’s been alright. It’s hard to get out at the moment, isn’t it? We’re just trying to do our piece of exercise a day.

‘We spend a lot of time with each other anyway so it’s been okay to self-isolate because it’s pretty much what we have been doing anyway, it’s the same as before but we’re just not getting out and about. 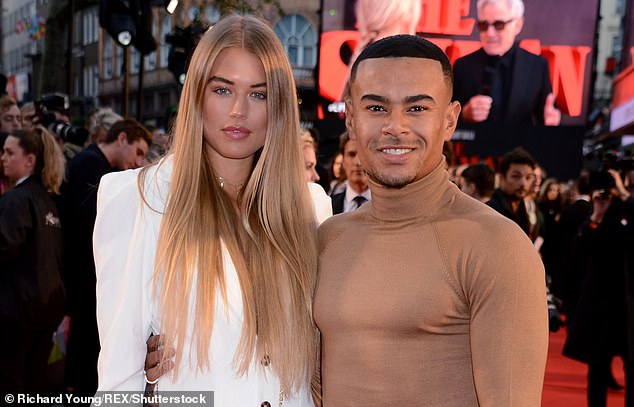 Over: Arabella recently moved in with fellow Love Island alum Harley Brash, 21, last month following her split from Wes, 22 (pictured together in October) 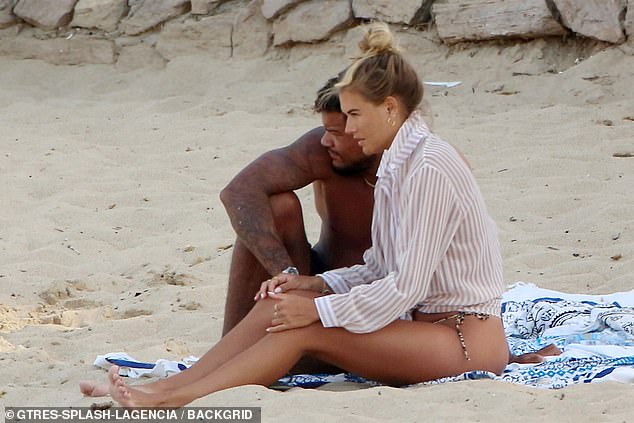 No looking back: But things appear to be moving swiftly on for Arabella

Off they go: When their day on the beach came to a close, Arabella slipped into a striped cotton shirt and crisp white shorts 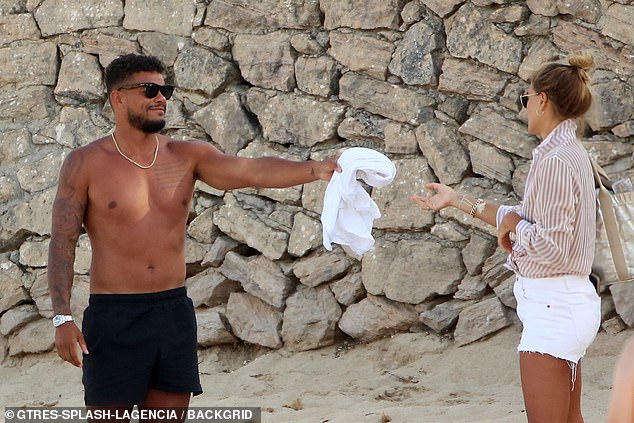 Here you go: The handsome gent passed Arabella the rest of her belongings

Wes and Arabella moved into their first flat together back in December, gushing that they were ready to start ‘the next chapter’ of their life.

In 2018, Wes reached the final of Love Island with former exotic dancer Megan Barton-Hanson, before ending their relationship in January 2019.

Arabella then appeared on the 2019 series of the ITV2 show and struck up a brief romance with Danny Williams, but was dumped from the island after just seven days’. 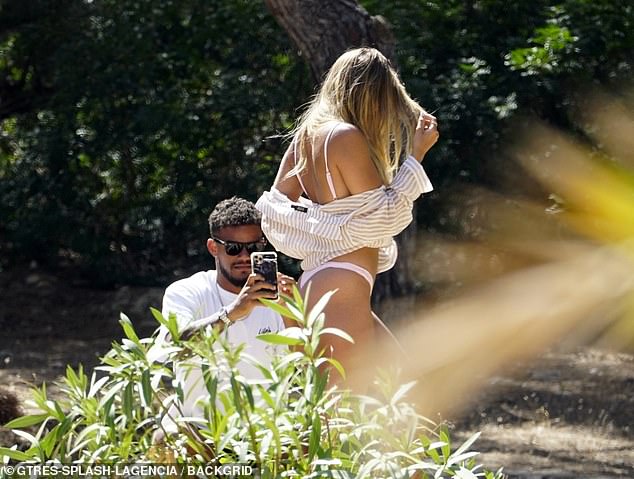 One more for the road: They soon headed to another location for yet more snaps 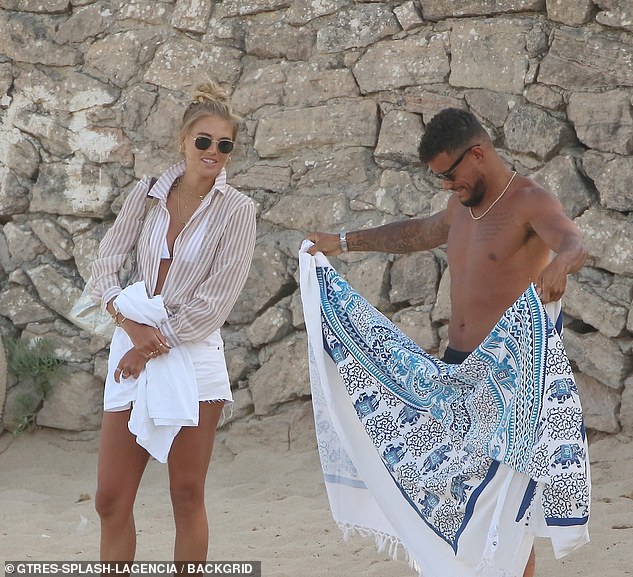 Ready to leave: He had folded up their blankets as Arabella looked on 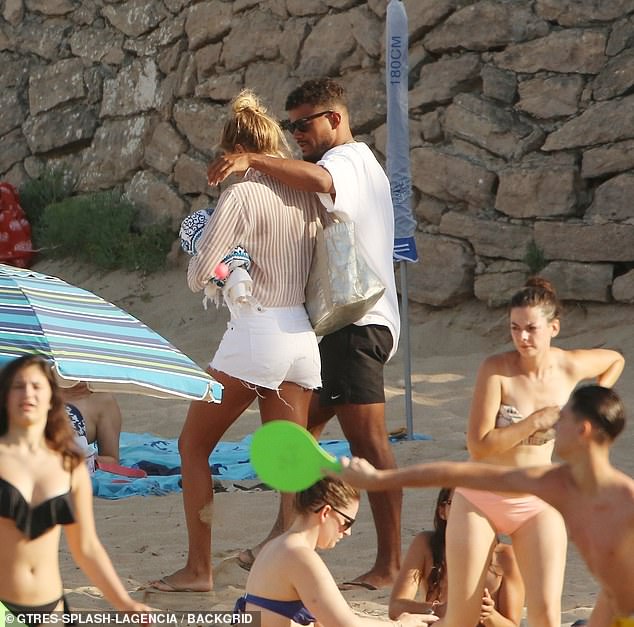 Cosy: He put his arm around his new girlfriend as they exited the beach 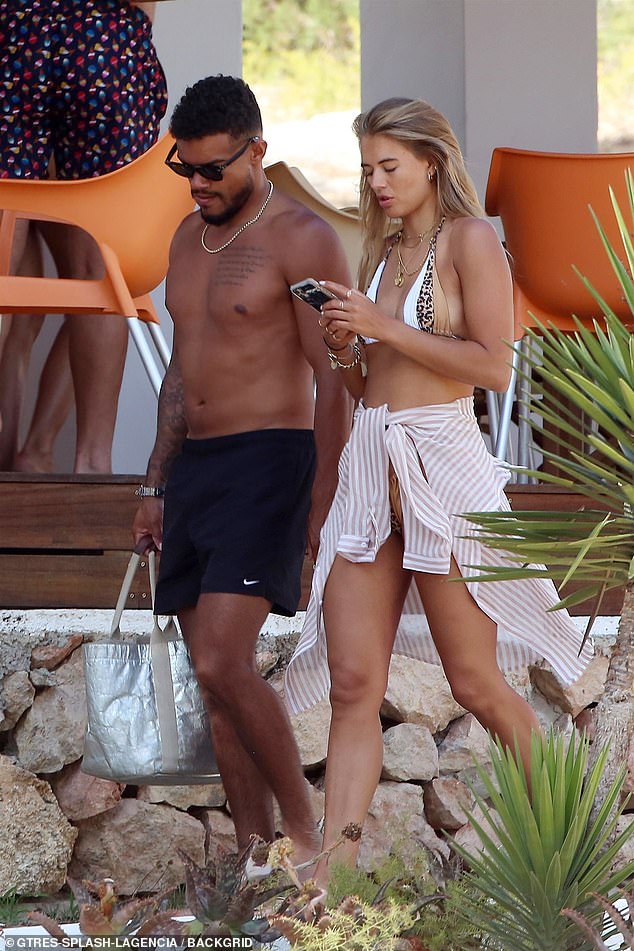 Taking a look: Arabella checked out her phone as the shirtless chap carried her bag for her 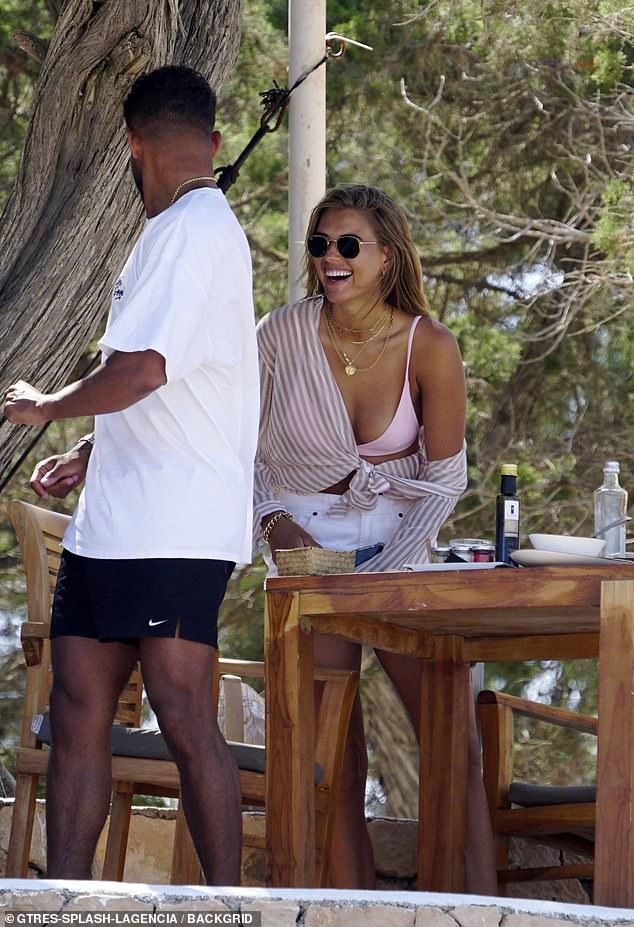 Loving life: The couple headed off for some lunch and appeared in high spirits 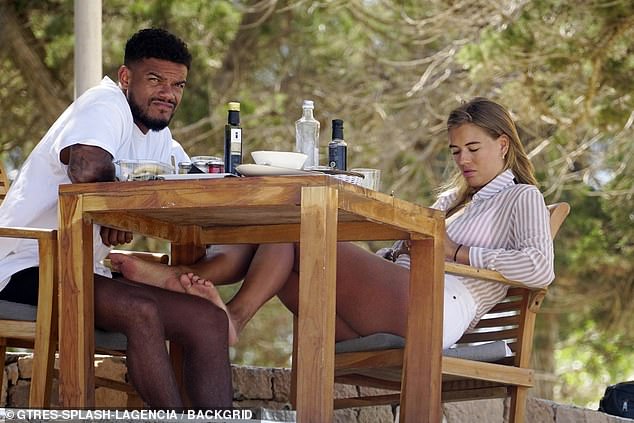 Back to work: Arabella was soon back on her phone as she rested her feet on his legs