Ariana Grande may seem to have it all – the looks, the money, the red-hot pop star career and the Instagram queen title.

But in the August cover of Vogue – which hits newsstands on July 23 –  she revealed that behind all the slick glam and confidence she is struggling.

She admitted she still finds it difficult to talk about some of the events of the last few years, including the death of her ex Mac Miller last September and the shocking terrorist attack that hit her Manchester concert in May 2017.

‘I’m a person who’s been through a lot and doesn’t know what to say about any of it to myself, let alone the world,’ said the former Disney star. ‘I see myself onstage as this perfectly polished, great-at-my-job entertainer, and then in situations like this I’m just this little basket-case puddle of figuring it out.’ 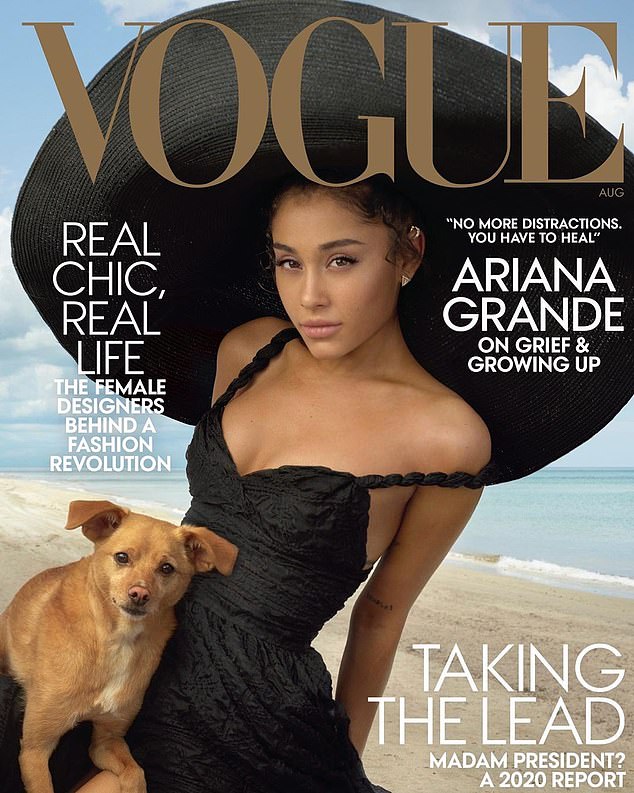 Not perfect: Ariana Grande may seem to have it all – the looks, the money, the red-hot pop star career and the Instagram queen title. But in the August cover of Vogue – which hits newsstands on July 23, she told reporter Rob Haskell that behind all the slick glam and confidence she is struggling

But she still pushes herself to work.

The No Tears Left to Cry hitmaker headlined the Coachella festival earlier this year but found the experience difficult because it reminded her so much Mac, whose real name was Malcolm McCormick and who died from an accidental overdose.

She tearfully told the magazine: ‘I never thought I’d even go to Coachella.

‘I was always a person who never went to festivals and never went out and had fun like that. But the first time I went was to see Malcolm perform, and it was such an incredible experience. I went the second year as well, and I associate…heavily…it was just kind of a mindf**k, processing how much has happened in such a brief period.’ 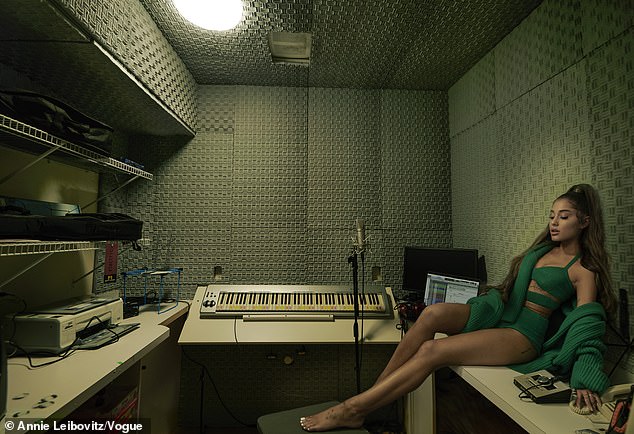 GLAM SLAM! Ariana was photographed by legendary shutterbug Annie Leibovitz. She wore Dior and Chloe in her shoot

She also discussed her brief engagement to Saturday Night Live star Pete Davidson, branding the whirlwind romance an ‘an amazing distraction.’ (The pair started dating in May 2018, got engaged in June and split in October.)

‘It was frivolous and fun and insane and highly unrealistic, and I loved him, and I didn’t know him,’ she said. ‘I’m like an infant when it comes to real life and this old soul, been-around-the-block-a-million-times artist. I still don’t trust myself with the life stuff.’

After Mac died she needed time alone, and ultimately turned to music.

‘But if I’m completely honest, I don’t remember those months of my life because I was (a) so drunk and (b) so sad,’ said Grande.

‘I don’t really remember how it started or how it finished, or how all of a sudden there were 10 songs on the board. 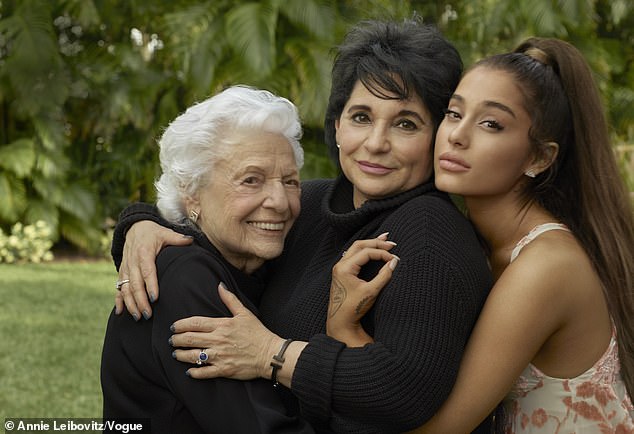 Three generations: ‘She has a way of taking on everyone’s pain,’ said her mother, Joan, seen here in the center. Also seen is her grandmother Marjorie

‘I think that this is the first album and also the first year of my life where I’m realizing that I can no longer put off spending time with myself, just as me.

‘I’ve been boo’d up my entire adult life. I’ve always had someone to say goodnight to.

‘So Thank U, Next was this moment of self-realization. It was this scary moment of ‘Wow, you have to face all this stuff now. No more distractions. You have to heal all this sh*t.” 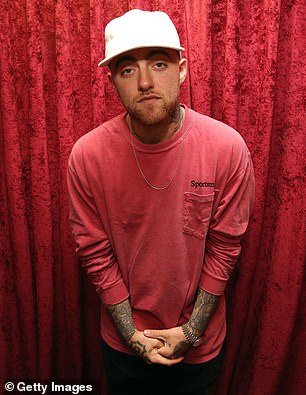 She misses him: One of her most painful experiences to date is losing ex Miller in 2018.

The singer added that she tries to be as ‘open’ as possible with her fans when she’s finding things tough but keeps some things hidden, which she thinks they can sense.

She said: ‘I’ve been open in my art and open in my DMs and my conversations with my fans directly, and I want to be there for them, so I share things that I think they’ll find comfort in knowing that I go through as well.

‘But also there are a lot of things that I swallow on a daily basis that I don’t want to share with them, because they’re mine. But they know that. They can literally see it in my eyes. They know when I’m disconnected, when I’m happy, when I’m tired. It’s this weird thing we have. We’re like fucking E.T. and Elliott.’

The superstar also talked about organizing the benefit concert for the Manchester victims. 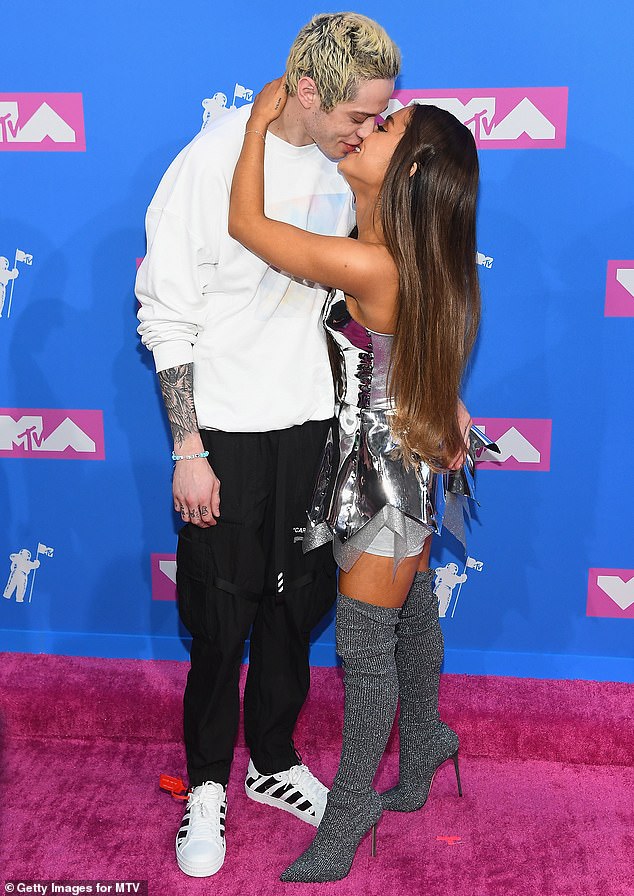 It didn’t last: After they split she became engaged to SNL star Pete Davidson. Their romance was whirlwind and well documented. After Mac died though she needed time alone. ‘But if I’m completely honest, I don’t remember those months of my life because I was (a) so drunk and (b) so sad,’ said Grande. Seen in 2018

‘It’s not my trauma, it’s those families’. It’s their losses, and so it’s hard to just let it all out without thinking about them reading this and reopening the memory for them,’ said the cover girl.

‘I’m proud that we were able to raise a lot of money with the intention of giving people a feeling of love or unity, but at the end of the day, it didn’t bring anyone back. Everyone was like, wow, look at this amazing thing, and I was like, what the fuck are you guys talking about? We did the best we could, but on a totally real level we did nothing.’

And after the tragedies that have rocked her life, the ‘7 Rings’ singer is also wary of celebrating the ‘beautiful’ things in her life because she can’t trust that they’ll stay that way.

She said: ‘I have to be the luckiest girl in the world, and the unluckiest, for sure. I’m walking this fine line between healing myself and not letting the things that I’ve gone through be picked at before I’m ready, and also celebrating the beautiful things that have happened in my life and not feeling scared that they’ll be taken away from me because trauma tells me that they will be, you know what I mean?’

On the cover she wore a Dior dress and bodysuit, Eric Javits hat and Ana Khouri ear cuff. The siren was also posing with her dog Toulouse Lautrec Grande, a Beagle-Chihuahua mix she found at an animal shelter.

Inside the magazine she had a Khaite cardigan, bralette, and boy shorts in one set up then a Chloé dress, Dior dress and another Eric Javits hat.

Vogue’s August 2019 issue is available on newsstands in NY/LA on July 16, and nationwide July 23.