Asia Argento, the Hollywood actress and #MeToo activist accused of sexual assault on an underage boy, has privately admitted having sex with the teenage actor despite issuing a public denial.

Argento, 42, became a figurehead for the campaign against sexual harassment after she was one of the first women to accuse Harvey Weinstein, the movie mogul, of abuse last October.

Former child actor Jimmy Bennett has accused her of sexual assault by having sex with him in 2013, when he was under the age of consent in California, which is 18. The pair met in 2004 when Argento cast Bennett, then just seven, to play her son in The Heart Is Deceitful Above All Things.

The allegations, which have shocked the #MeToo movement, were first reported by The New York Times.

It led to an initial furious denial from the Italian actress, who claimed she "never had any sexual relationship" with Bennett. But last night TMZ, the celebrity website, revealed text messages between Argento and a friend in which she admitted a sexual encounter, though she said the teenager "jumped me".

Argento also claimed in the text messages that she did not know Bennett was a minor until she received a "shakedown" letter from his lawyer demanding money. 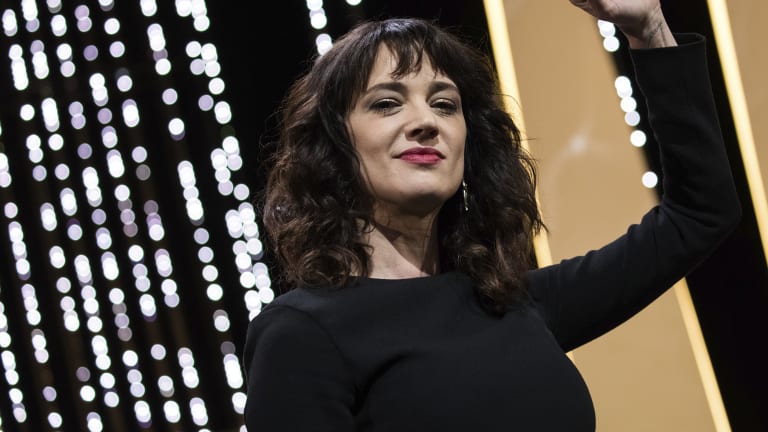 Asia Argento has privately admitted having sex with an underage boy despite issuing a public denial.

The actress added: "It (sic) wasn't raped. but I was frozen. He was on top of me. After, he told me I had been his sexual fantasy since he was 12."

Argento said in the messages that she didn't report the incident at the time because she "felt bad" for the "failed child actor".

She said when the "shakedown" letter arrived she wanted to talk publicly about being extorted but her boyfriend, the late chef Anthony Bourdain, wanted to pay Bennett off. She claimed Bennett kept sending her nude images, and that she has 80 pages of information on him from a private investigator Bourdain hired.

TMZ published a photograph of Argento and Bennett apparently in bed together and a note from Bennett to Argento which said: "Asia, I love you with all my heart."

The existence of the picture had been reported before it was published. In her messages, sent in the early hours of Monday, Argento said such a picture did not mean anything and was misleading because Bennett was actually standing up.

Argento agreed to pay $US380,000 to Bennett after he threatened to sue her for having sex with a minor. She paid in the months after she made public her allegations against Weinstein, leading the movie mogul's lawyers to accuse her of hypocrisy.

Other actresses who have accused Weinstein of sexual misconduct said Argento must be held accountable if the allegations against her were true.

Mira Sorvino said: "Child sexual assault is a heinous crime and is against all that I and the #MeToo movement stands for."

Ashley Judd said: "We hold any and every abuser accountable, regardless of their gender, race, socioeconomic status, public visibility or popularity."

Argento's representatives did not reply to a request for comment.

Bennett broke his silence on Wednesday, saying he tried to handle the matter privately and felt "ashamed and afraid" after the NYT story was published.

In a statement issued through his attorney Gordon Sattro, he said when Argento publicly accused movie producer Harvey Weinstein of rape, his "trauma resurfaced as she came out as a victim herself."

Bennett said he "tried to seek justice in a way that made sense to me at the time because I was not ready to deal with the ramifications of my story becoming public."

"At the time I believed there was still a stigma to being in the situation as a male in our society," he said. "I didn't think that people would understand the event that took place from the eyes of a teenage boy.

"I would like to move past this event in my life, and today I choose to move forward, no longer in silence."

The Times report added a new chapter to the ongoing public dialogue around sexual misconduct, sparked in large part by the allegations against Weinstein.

On Monday, Weinstein's attorney used the report to try to undermine the accusations made against his client, who faces criminal charges in New York. "This development reveals a stunning level of hypocrisy by Asia Argento, one of the most vocal catalysts who sought to destroy Harvey Weinstein," attorney Benjamin Brafman said.

Tarana Burke, the activist who founded #MeToo, weighed in as well, writing in a series of tweets that the movement is "for all of us, including these brave young men who are now coming forward."

"My hope is that as more folks come forward, particularly men, that we prepare ourselves for some hard conversations about power and humanity and privilege and harm," she continued.

"A shift can happen. This movement is making space for possibility. But, it can only happen after we crack open the whole can of worms and get really comfortable with the uncomfortable reality that there is no one way to be a perpetrator and there is no model survivor.

"We are imperfectly human and we all have to be accountable for our individual behavior."