Obama recalled his friendship with McCain — the one they had behind closed doors. “We didn’t advertise it, but every so often over the course of my presidency, John would come over to the White House, and we’d just sit and talk in the Oval Office just the two of us. We’d talk about policy and we’d talk about family and we’d talk about the state of our politics,” he explained. “And our disagreements didn’t go away during these private conversations. Those were real and they were often deep, but we enjoyed the time we shared away from the bright lights. And we laughed with each other and we learned from each other, and we never doubted the other man’s sincerity or the other man’s patriotism. Or that when all was said and done, we were on the same team.”

The 57-year-old politician remembered reacting with “sadness” and “a certain surprise” when McCain asked him to speak at his funeral, though he called the invitation “a precious and singular honor.” He even quipped, “After all, what better way to get a last laugh than to make George and I say nice things about him to a national audience?”

The 44th president noted: “And, in fact, on the surface, John and I could not have been more different … But for all our differences, for all the times we sparred, I never tried to hide, and I think John came to understand, the longstanding admiration that I had to him.”

Obama also appeared to make a jab at the current state of politics when he brought up his and McCain’s main similarities. “John understood, as JFK understood, as Ronald Reagan understood, that part of what makes our country great is that our membership is based not on our bloodline, not on what we look like, what our last names are,” he said. “It’s not based on where our parents or grandparents came from or how recently they arrived, but on adherence to a common creed: That all of us are created equal, endowed by our creator to certain inalienable rights.”

While the former Illinois senator recalled being “grateful” but not surprised when McCain defended his heritage during the 2008 presidential campaign, he believed it was about more than just him. “I’m certain that in those moments that have been referred to during the campaign, he saw himself as defending America’s character, not just mine,” he told the crowd. “For he considered it the imperative of every citizen who loves this country to treat all people fairly.” 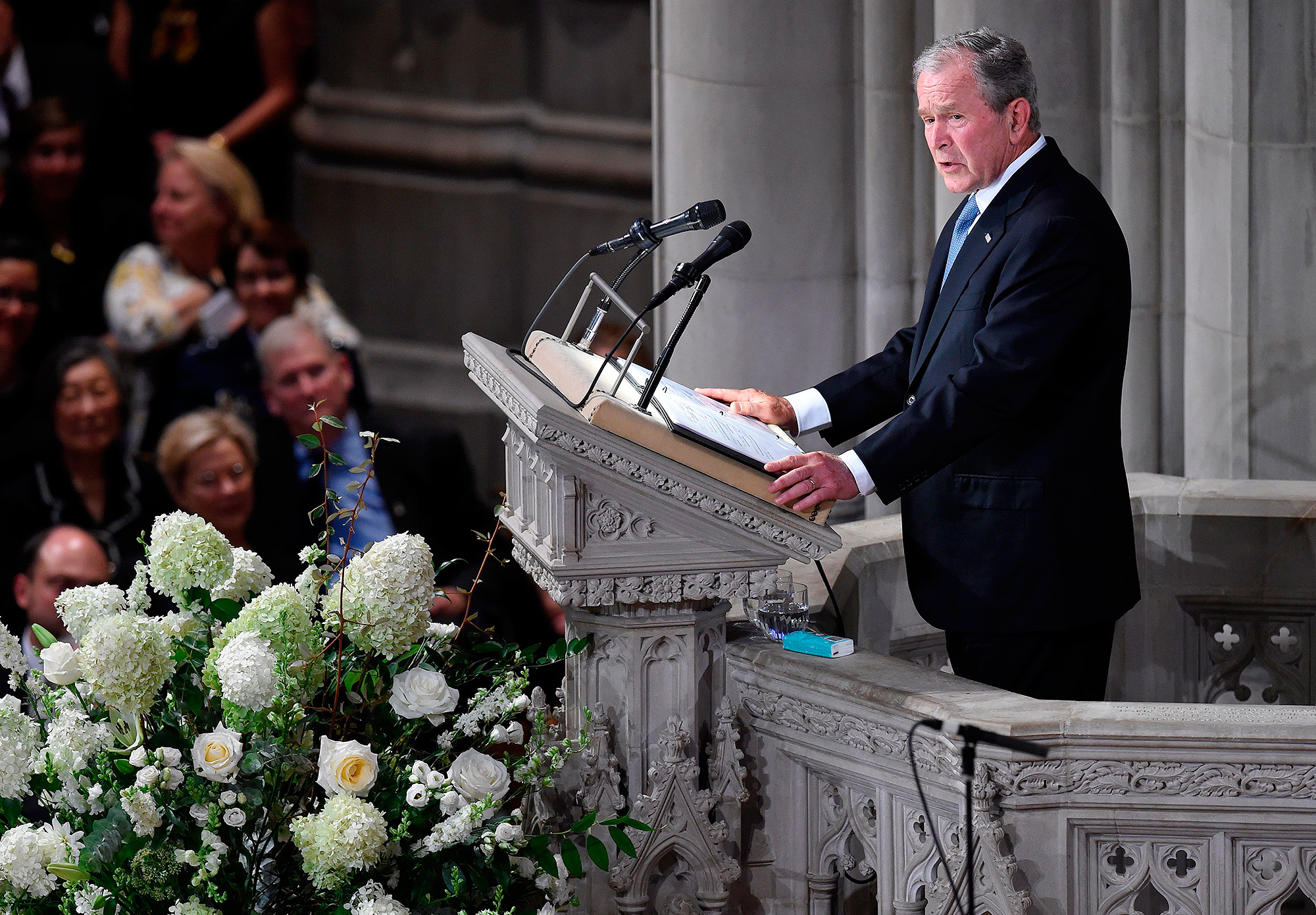 Bush, meanwhile, admitted that while he shared a party with McCain, the two didn’t always see eye-to-eye. “For John and me, there was a personal journey. Our hard-fought political history,” he said. “Back in the day, he could frustrate me, and I know he’d say the same thing about me. But he also made me better.”

The 72-year-old former commander-in-chief echoed Obama’s statements about the war veteran’s stance on human rights: “He respected the dignity inherent in every life. A dignity that does not stop at borders and cannot be erased by dictators. Perhaps above all, John detested the abuse of power. He could not abide bigots and swaggering despots.”

McCain died at age 81 on August 25 after battling brain cancer. A private burial will take place on Sunday, September 2, following a service at the U.S. Naval Academy in Annapolis, Maryland.