‘I’m naming this award Harry, because it’s coming back to the US with me!’ Brad Pitt makes Mexit and Brexit quips as he wins Best Actor BAFTA… after he drops out ‘due to family obligations’

The star, 56, won the Supporting Actor BAFTA for his role as Cliff Booth in Once Upon a Time in Hollywood, but was absent from the star-studded London ceremony after dropping out at the last minute due to ‘family obligations.’

His coveted award was collected by his co-star Margot Robbie, who read out a speech from Brad, including well-timed Mexit and Brexit quips as she took to the stage on his behalf at the 73rd annual event. 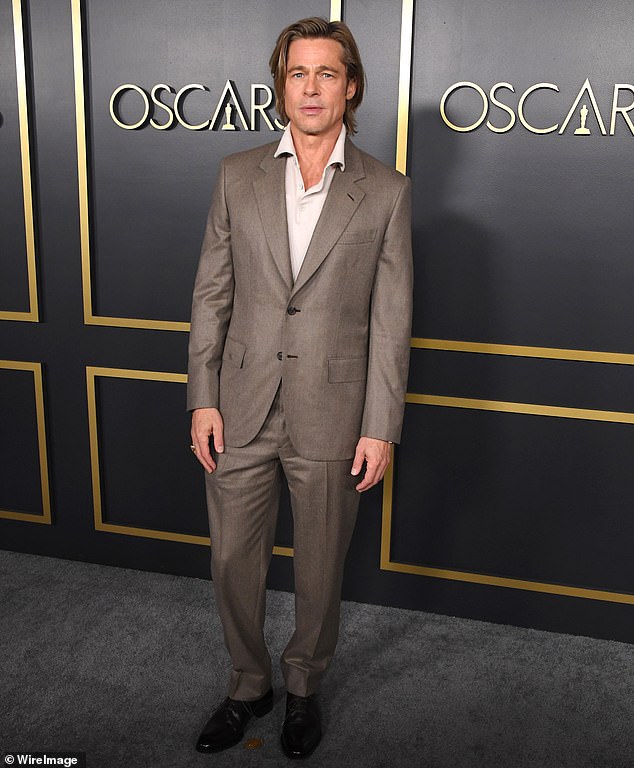 Absent: Brad Pitt continued his run of 2020 awards show glory, picking up the British Academy Film Award on Sunday night, but failed to show up to the London ceremony

Brad sent a tongue-in-cheek acceptance speech which was read out by Margot, who lost out on her Supporting Actress nomination for her Sharon Tate role in the Quentin Tarantino movie.

The speech had the A-list crowd gathered at London’s Royal Albert Hall in hysterics as he joked about his famously single status.

‘Hey Britain, heard you just became single, welcome to the club,’ read the speech while he went on to poke fun at Megxit, after Prince Harry and Meghan Markle stepped back from their senior roles in the Royal Family and moved to Canada. 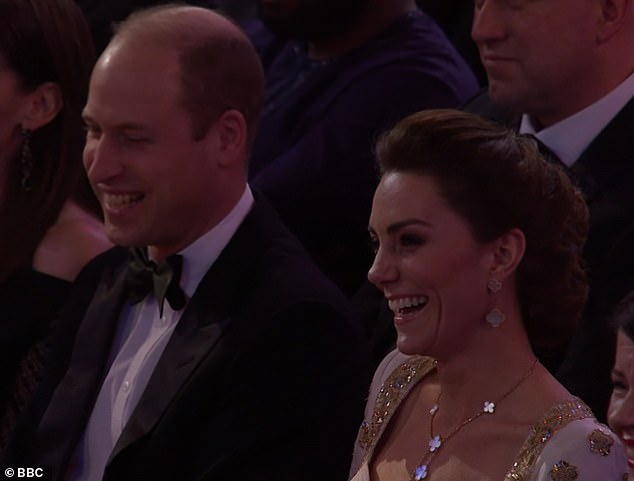 Having a laugh: After Brad’s quips were delivered, the Duke and Duchess of Cambridge, who were in attendance on the night, were seen laughing along with the audience

Margot continued Brad’s speech: ‘He says he is going to name this Harry because he is really excited about bringing it back to the States with him. His words not mine.’

After Brad’s quips were delivered, the Duke and Duchess of Cambridge, who were in attendance on the night, were seen laughing along with the audience.

When contacted by MailOnline, a representative for Brad Pitt declined to comment regarding the star’s absence from the show.

However, a source close to the actor revealed to MailOnline that the star was unable to attend the event due to ‘family obligations’. 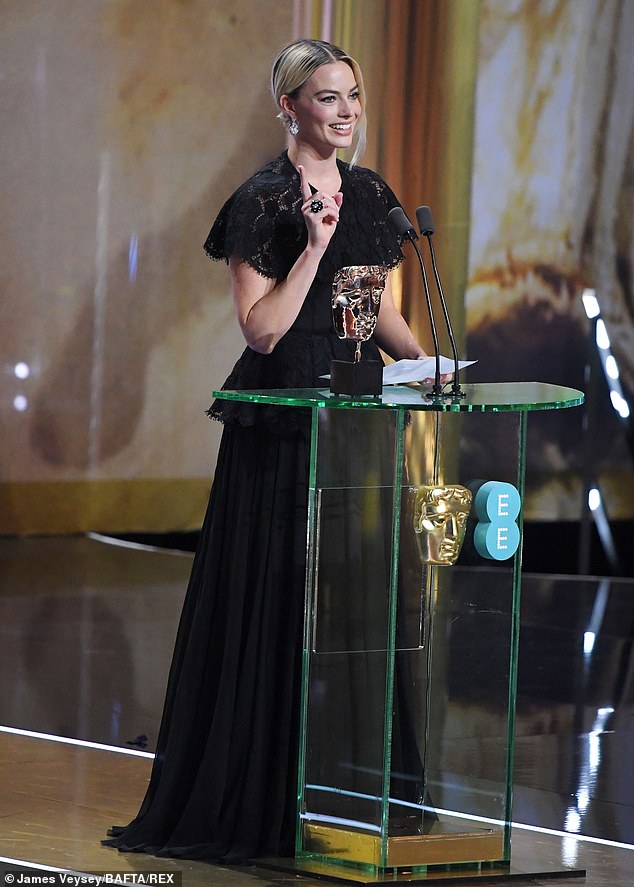 Joker: The award was collected by his co-star Margot Robbie, who read out a speech from Brad, including a well-timed Brexit quip 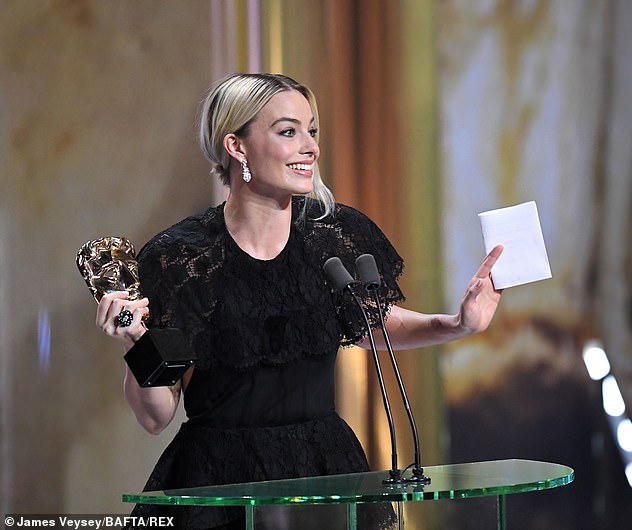 Brad wasn’t the only one to comment on Brexit after scooping an award at the glitzy awards ceremony on Sunday.

After Taika Watiti scooped the Adapted Screenplay trophy for Jojo Rabbit, he made a less comedic acknowledgement of the UK’s exit from the European Union, which became official in the last hour of January 31.

Taking to the stage, he said: ‘Thanks BAFTA, this is very, very cool for me. Coming from the colonies, we know it’s been a hard week for you guys. It’s very nice to take a little bit of your gold back home. Where it belongs.’

Last month, Harry relocated to Canada to join his wife and son Archie, after weeks after the couple’s shock announcement that they’d be quitting the Royal Family. 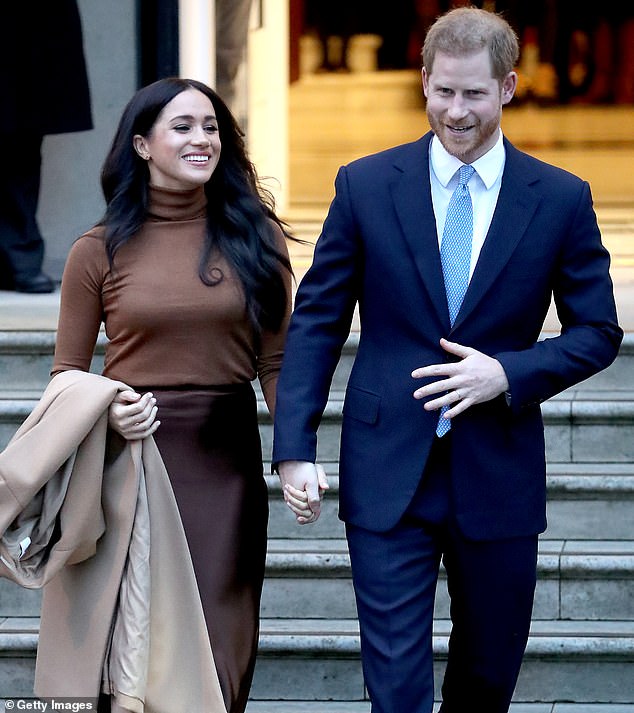 Moved: Prince Harry, Duke of Sussex and Meghan, Duchess of Sussex are currently in Canada, after announcing they’d be stepping away from the Royal Family and moving to North America 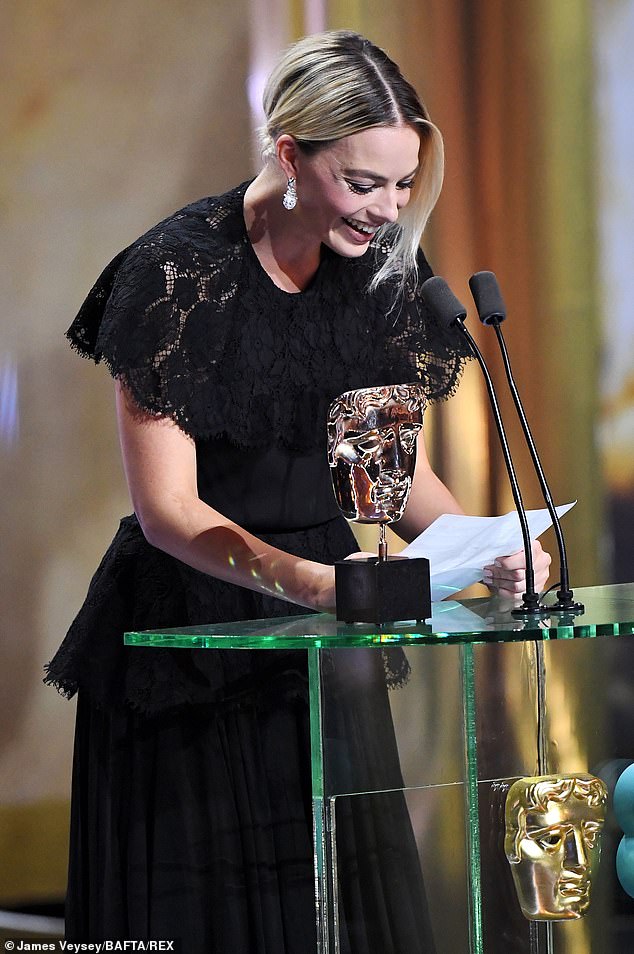 Ahead of leaving the UK, Harry spoke of his ‘great sadness’ at leaving the Royal Family, but said he and Meghan had ‘no other option’ than to quit senior royal duties.

In an emotional speech at a dinner for children’s charity Sentebale, the 35-year-old said the UK is a place that he loves and that will ‘never change’ and the royal couple had hoped to continue serving the Queen, the Commonwealth and his military associations, without any public funding, but this was not possible.

Harry also paid a stirring tribute to his grandmother, calling her his ‘commander-in- chief’ and that he was ‘incredibly grateful’ to Her Majesty and the rest of his family for supporting him and Meghan.

He said: ‘Once Meghan and I were married we were excited. We were hopeful and we were here to serve. For those reasons it brings me great sadness that it has come to this. 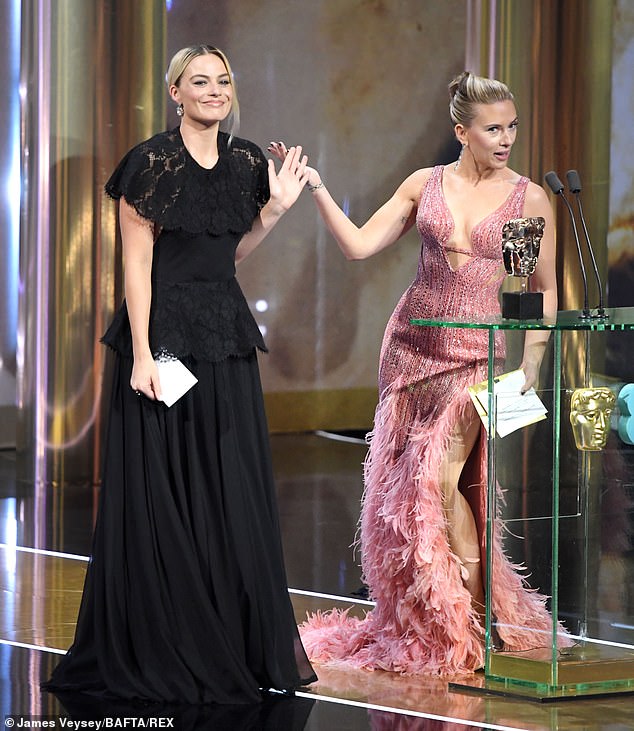 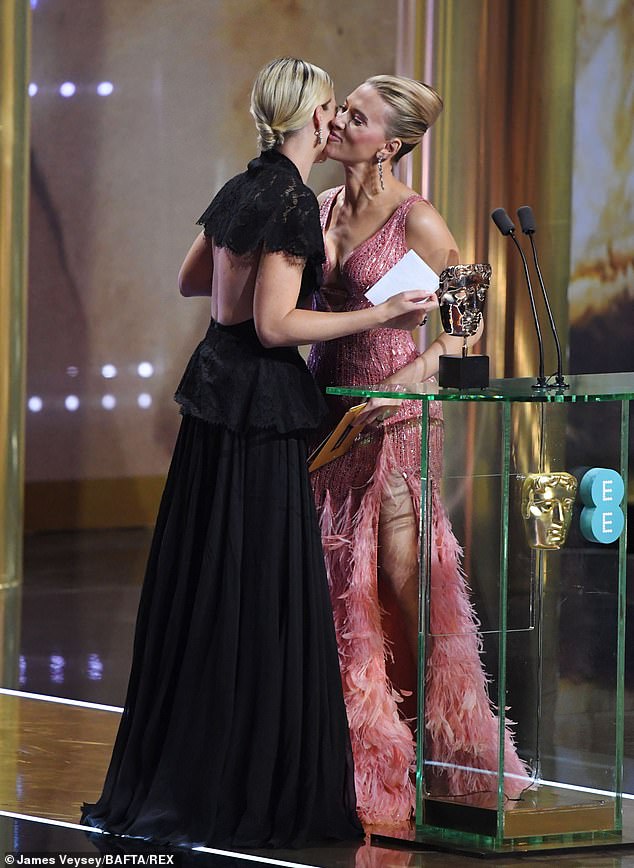 ‘The decision that I have made for my wife and I to step back is not one I made lightly. It was so many months of talks after so many years of challenges and I know I haven’t always gotten it right but as far as this goes there really was no other option.’

It comes after a recent statement from the Queen that Harry and Meghan will ‘not use their HRH titles’, as they look to forge a new life in North America.

As well as returning the £2.4 million spent on a lavish refurbishment of Frogmore Cottage, they will pay a commercial rent – estimated at up to £360,000 a year – to retain it as their British home.

‘Our hope was to continue serving the queen, the commonwealth and my military associations but without public funding.

‘Unfortunately that wasn’t possible. I’ve accepted this knowing that it doesn’t change who I am or how committed I am but I hope that helps you understand what it had come to that I would step my family back from all I have ever known to take a step forward into what I hope can be a peaceful life.’

The deal hammered out at Sandringham stipulates that the pair, who will be known as Harry, Duke of Sussex and Meghan, Duchess of Sussex, will cease to be working members of the Royal Family from this spring and will not perform any official duties on behalf of the Queen – effectively leaving ‘The Firm’ completely.

By quitting their senior royal roles, they will sacrifice their HRH title.

While Renee Zellweger, 50, won the Leading Actress gong for her role as Judy Garland in the namesake biopic Judy with Joaquin Phoenix, 45, taking home the Leading Actor award for his role as Joker.

Other A-lister wins included Laura Dern, 52, who won the Supporting Actress gong for her role as cutthroat lawyer Nora Fanshaw in Marriage Story.

While an absent Brad Pitt won the Supporting Actor gong for his role as Cliff Booth in Once Upon a Time in Hollywood, which was collected by his co-star Margot Robbie who lost out on her own Supporting Actress nomination for her Sharon Tate role in the Quentin Tarantino movie.

Andy Serkis was honoured with the Outstanding British Contribution to Cinema award by his Lord Of The Rings co-star Sir Ian McKellen while E.T producer Kathleen Kennedy received the highest honour with The Fellowship award.

Top Boy and Blue Story actor Michael Ward won the EE Rising Star Award, which was voted for by the public.

Despite not winning an award for her role, Margot Robbie’s Bombshell won the Make Up & Hair BAFTA with Little Women winning Costume Design.

Writer/director Mark Jenkin and producers Kate Byers and Linn Waite won the Outstanding Debut by a British Writer, Director or Producer for Bait.

The 2020 ceremony is the 73rd annual EE British Academy Film Awards and is considered the UK’s most prestigious awards ceremony. It is also the last event to take place ahead of the Oscars.

The ceremony was hosted by Graham Norton, taking over the role from Joanna Lumley, who hosted for two years prior.

BAFTA winners and nominees are voted for by 6,500 BAFTA members, comprised of industry professionals and creatives around the world.

Members vote to decide the nominations from hundreds of films in round one, then vote for the winner from the shortlist in round two. 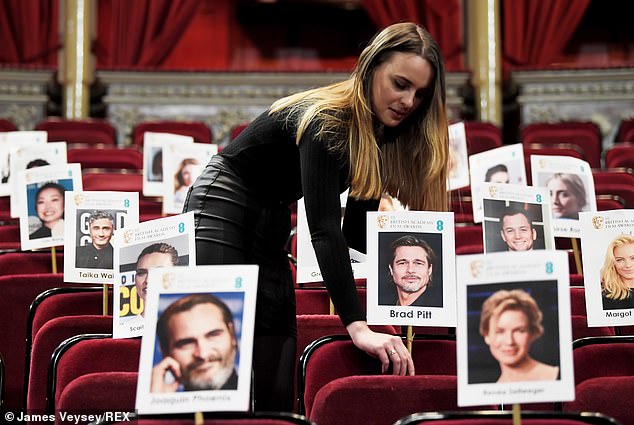 A-list attendees: Brad Pitt was among the many stars expected to jet over to the UK for the ceremony held at London’s Royal Albert Hall, with the seating chart finalised on Thursday 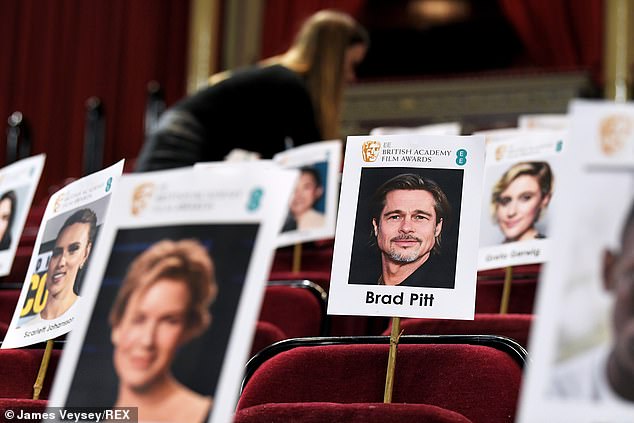 Big names: The Hollywood actor was expected to enjoy plum seating among a host of stars

ONCE UPON A TIME… IN HOLLYWOOD David Heyman, Shannon McIntosh, Quentin Tarantino 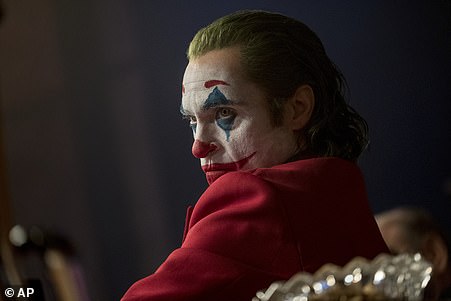 Joker has earned the most nods with 11 nominations

OUTSTANDING DEBUT BY A BRITISH WRITER, DIRECTOR OR PRODUCER

ONLY YOU Harry Wootliff (Writer/Director)

FILM NOT IN THE ENGLISH LANGUAGE

PORTRAIT OF A LADY ON FIRE Céline Sciamma, Bénédicte Couvreur

ONCE UPON A TIME… IN HOLLYWOOD Quentin Tarantino

ONCE UPON A TIME… IN HOLLYWOOD Quentin Tarantino 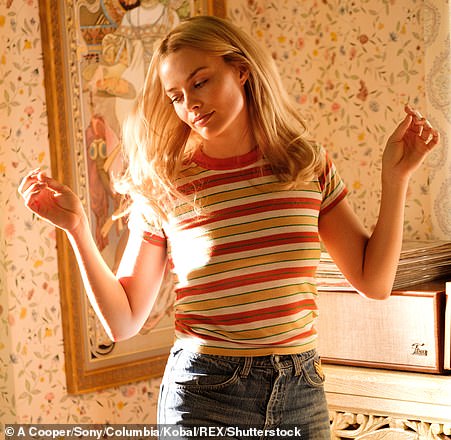 Once Upon A Time… In Hollywood has earned 10 nods 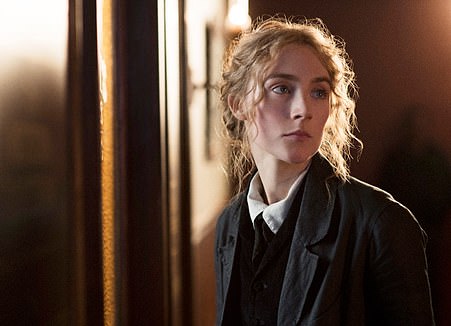 LEONARDO DICAPRIO Once Upon a Time… In Hollywood

MARGOT ROBBIE Once Upon a Time… in Hollywood

TOM HANKS A Beautiful Day in the Neighborhood

BRAD PITT Once Upon a Time… in Hollywood – WINNER 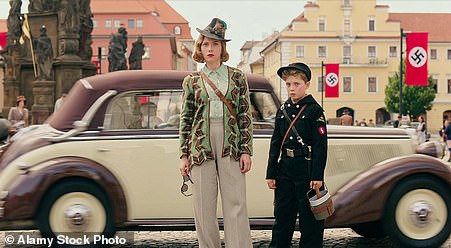 ONCE UPON A TIME… IN HOLLYWOOD Victoria Thomas

Netflix hit The Irishman has 10 nominations

ONCE UPON A TIME… IN HOLLYWOOD Fred Raskin

ONCE UPON A TIME… IN HOLLYWOOD Barbara Ling, Nancy Haigh

ONCE UPON A TIME… IN HOLLYWOOD Arianne Phillips

IN HER BOOTS Kathrin Steinbacher

LEARNING TO SKATEBOARD IN A WARZONE (IF YOU’RE A GIRL) Carol Dysinger, Elena Andreicheva – WINNER

EE RISING STAR AWARD (voted for by the public)

Producer Kathleen Kennedy will be granted the BAFTA Fellowship Award.

Actor Andy Serkis will be honoured for his Outstanding Contribution to Cinema.