‘You choreograph it like a stunt’: Bridgerton’s Phoebe Dynevor reveals an intimacy coordinator helped plan her ‘great’ sex scenes with Regé-Jean Page as she dazzles in fashion shoot

Phoebe Dynevor has revealed that an intimacy coordinator helped plan her ‘great’ sex scenes in Bridgerton.

The actress, 25, who plays the lead role of Daphne, explained how the ‘first-ever scene’ she shot for the Netflix show was with hunky co-star Regé-Jean Page.

Although only being released on Christmas Day, the saucy period drama has already been a hit with viewers for its impressive scenery and racy content. 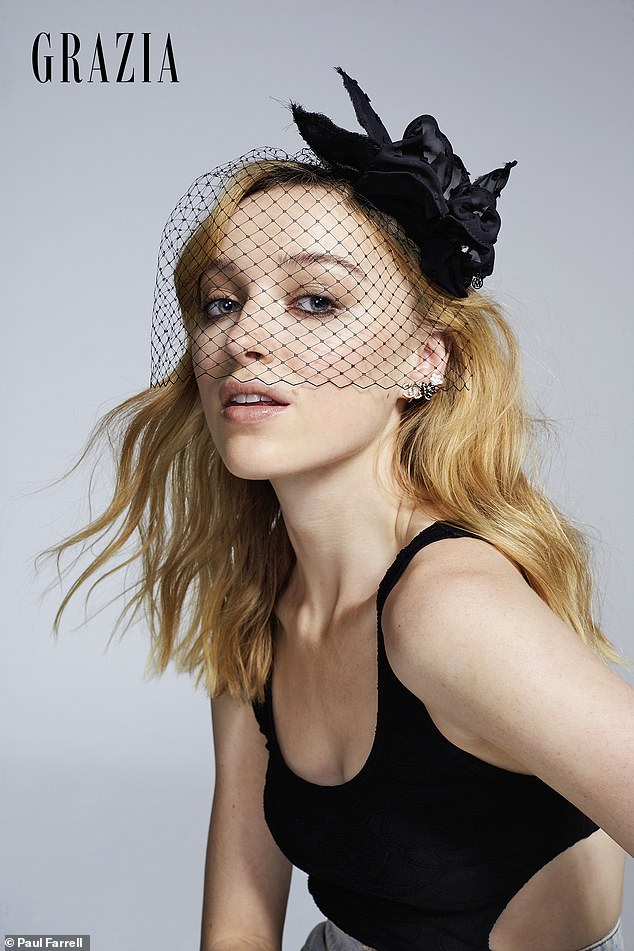 Speaking with Grazia about her sex scenes, Phoebe said: ‘My first-ever scene was in episode six, where Simon is going down on Daphne.

‘And it was so great, because it felt safe and fun: you choreograph it like a stunt, or a dance. It’s crazy to me that [an intimacy coordinator] hasn’t been there in the past.

‘I’ve done sex scenes before that I can’t believe I did: it was only five or six years ago, but it would not be allowed now.’

Phoebe added: ‘I love her [Daphne’s] coming-of-age story and her sexual awakening. I love seeing them female gaze and watching her figure it out for herself. She’s a late bloomer, but it’s not like she can google it.’ 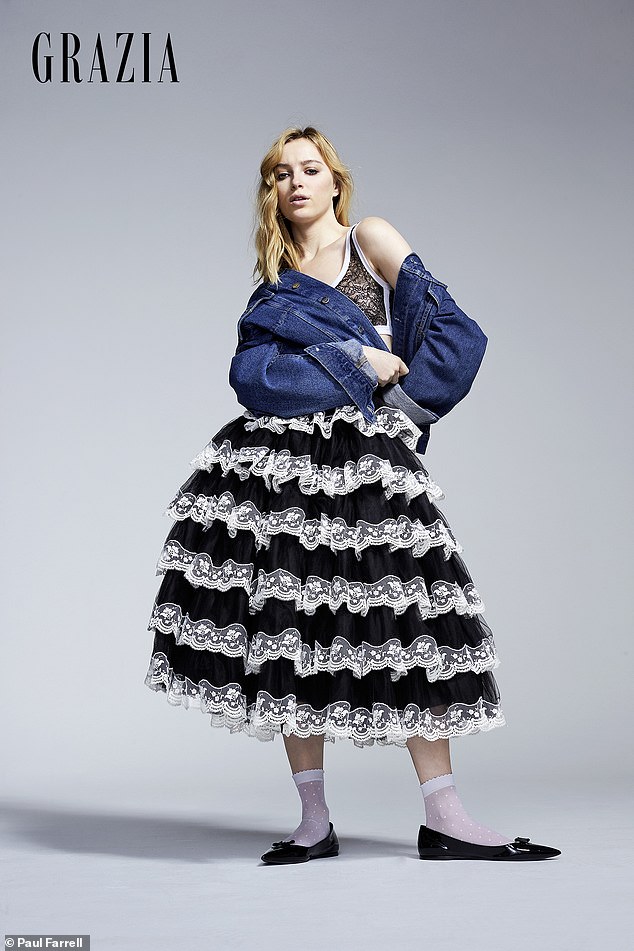 Big break: The actress, 25, whose mother is Coronation Street star Sally Dynevor, has been acting for around 10 years however Bridgerton is her biggest role to date

Daphne, the eldest daughter of the powerful Bridgerton family, is introduced as ‘perfectly beautiful’ and is referred to as ‘flawless’ when she meets Queen Charlotte, played by Golda Rosheuvel.

The show sees her debut onto Regency London’s competitive marriage market – where Regé-Jean’s character Simon Basset, the Duke of Hastings, is the catch of the season.

Despite proclaiming that they want nothing the other has to offer, the attraction between Simon and Daphne is undeniable and sparks fly as they find themselves engaged in an battle of wits while navigating society’s expectations for their future.

Phoebe credits an excellent make-up artist and good lighting for pulling her through a seven-month-long shoot, often with six-day weeks and night shoots.

Co-stars: Speaking about her sex scenes with Regé-Jean Page, Phoebe said ‘it was so great, because it felt safe and fun: you choreograph it like a stunt, or a dance’ (pictured on the show) 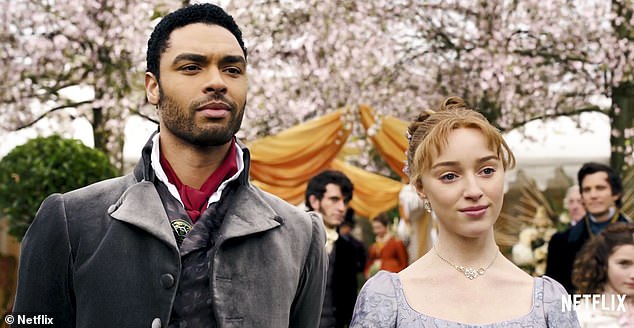 All good fun: The actor, 30, plays the Duke of Hastings in the show alongside co-star Phoebe Dynevor (pictured together)

However at times the pressure took its toll, with Phoebe revealing that she had a ‘full-blown panic attack’ during one scene. 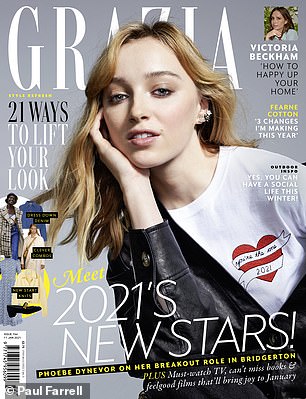 Read the full interview in Grazia magazine, on sale from Tuesday

She said: ‘There is a scene in one episode where Daphne walks down the stairs and everyone is staring at her.

‘That was one of the hardest scenes to shoot. Everyone has days where they wake up and feel like poo and don’t want to see people, let alone be on camera.

‘It just so happened I was having one of those days then, and felt so out of my comfort zone. Basically, I had a full-blown panic attack.’

Phoebe has been acting for more than a decade with roles in Waterloo Road and opposite the TV adaptation of Guy Ritchie’s Snatch – ‘it was a bit of a boys’ club’, she says.

She’s also appeared in Darren Star’s creation Younger. However Bridgerton is her biggest role to date.

Discussing the prospect of now being identifiable to millions of Netflix viewers, Phoebe said she’s  prepared, but not necessarily thrilled. 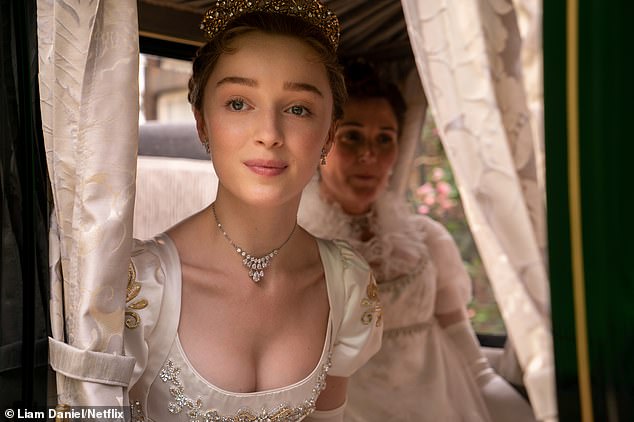 Big debut: The show follows Daphne, played by Phoebe (pictured), who hopes to follow in her parents’ footsteps and find a match sparked by true love 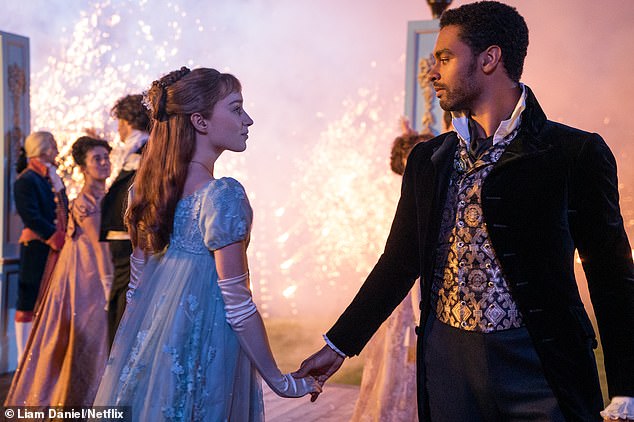 Romance? Although saying they’re not interested in one another, sparks are soon flying between Phoebe and Regé-Jean’s characters

‘There is a potential threat in fame,’ she says, after consideration. ‘I don’t like the idea of it. But I’m so proud of what Bridgerton stands for. I couldn’t think of anything else that I would want people to know me from.’

Luckily, she has a solid role model in her mother, actor Sally Dynevor. Having played Sally Metcalfe in Coronation Street since 1986, she has been beamed into millions of people’s homes three nights a week for nigh on 35 years.

When asked if she understood her mum’s fame, Phoebe said: ‘It was just my mum. She’s always taken it in her stride, and been very chilled and grateful and humble. Gratitude is the most important thing.’

Speaking to the Sunday Mirror ahead of Bridgerton’s release, Sally shared her excitement to see her daughter on the streaming giant’s site.

She said: ‘I just want to say I’m very proud of Phoebe and as a family, we are so excited to see Bridgerton on Christmas Day.’

Read the full interview in Grazia magazine, on sale from Tuesday. Bridgerton is on Netflix now 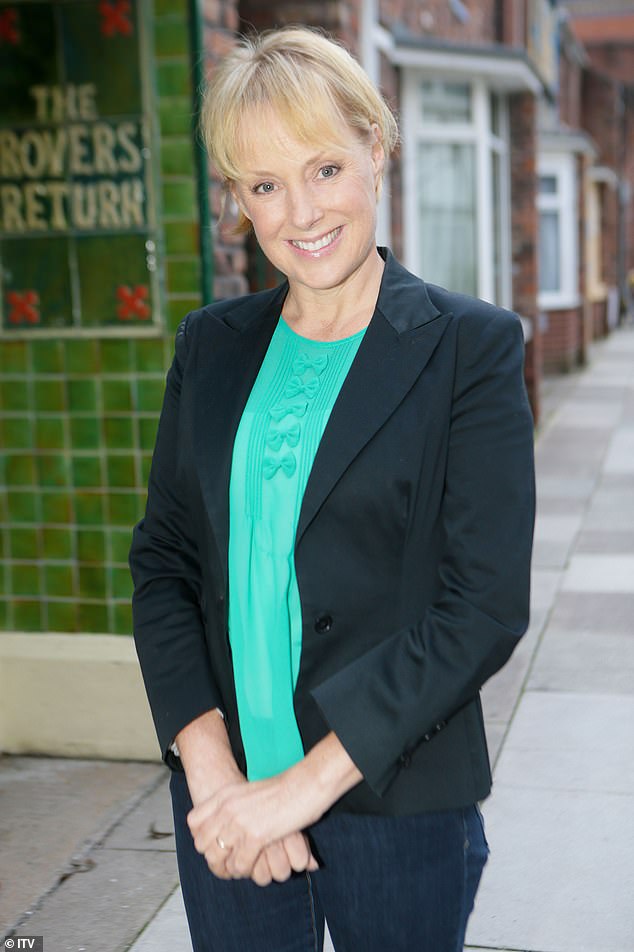