Kevin Federline is hitting back at his ex-wife Britney Spears after she made claims in an Instagram post that he once refused to see her when she was pregnant with their child.

Spears, 40, wrote in her caption on Thursday: ‘But geez my ex-husband [Federline] wouldn’t see me when I flew to New York with a baby inside me and Las Vegas when he was shooting a video !!!’

The comments were in context of Spears telling fans that she had suffered ‘absolutely horrible’ perinatal depression during her pregnancies – painting Federline as an unsympathetic character.

She also claimed she learned about their marriage being over by receiving a text message from a friend.

However, Federline’s attorney Mark Vincent Kaplan responded when asked for comment, saying: ‘[Britney’s account] is completely the opposite of what’s true, she knows that.’ 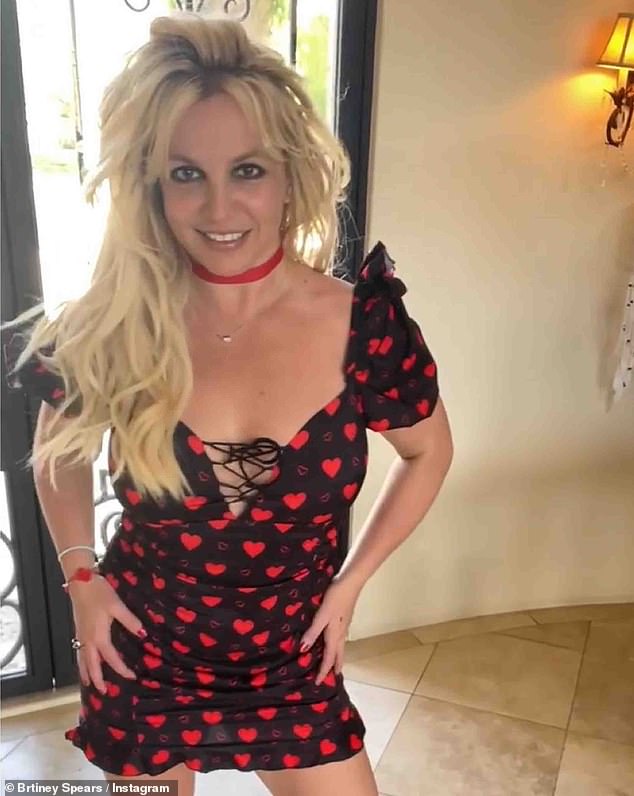 Trouble: Britney Spears has been blasted by ex-husband Kevin Federline over claims he refused to see her when she was pregnant (Pictured this week on Instagram)

In a video obtained by TMZ the attorney added a warning, stating: ‘She should be very careful about pursuing a dialogue that’s based on revisionist history.’

The pair were married from October 6, 2004 to July 30, 2007 and starred in their own reality show Britney and Kevin: Chaotic that lasted just one season in 2005.

Kaplan continued: ‘That story about Kevin in Las Vegas and Britney is completely erroneous, and he’s not going to stand by and let that story besmirch what he did and his support of her back in the day.’

Federline’s attorney went on to stress that his client is not going to tolerate continued accusations from Spears, who has been firing off claims against her family for the past few months on Instagram.

‘But when she starts talking about the way things were when Jayden and Preston were infants that’s completely fabricated. Kevin is not going to let that stand by and let that be the portrayal of fact.’

It’s not the first time that Spears has got into trouble for posting her stream of consciousness rambles to her Instagram account, having previously made claims against her family members.

Spears is currently expecting her third child with partner Sam Asghari, and has been keeping fans up to date with her wellbeing, as well as reflecting on her past.

She recently described pregnancy as being ‘100% spiritually out of this world’ and how carrying her children in her womb is her favorite part of the journey.

‘But a lot of women I’ve spoken to were so much better after they had the baby … I didn’t want mine to come out ever !!! I liked the baby being safe inside my womb and close to my heart.’ 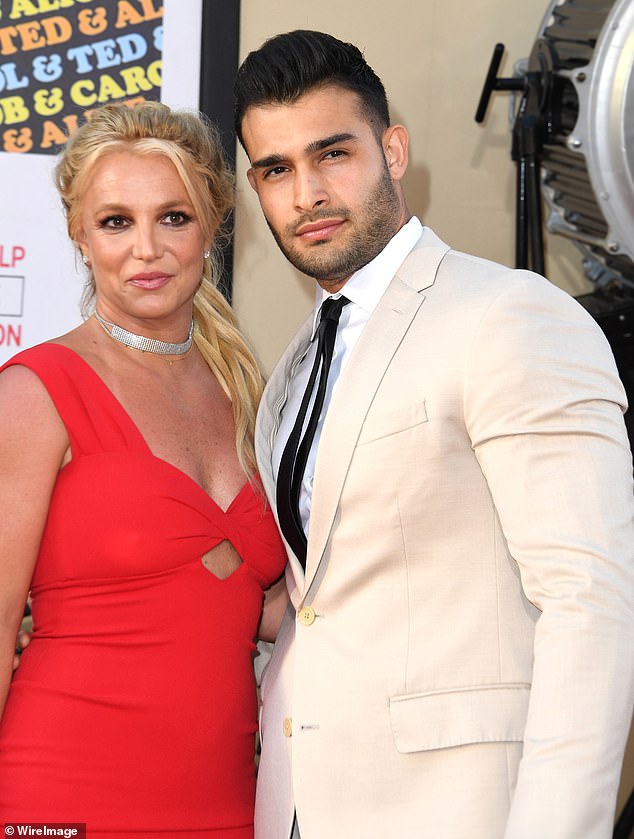 Expecting: She is currently expecting her first child with ‘husband’ Sam Asghari, 28, who she got engaged to last September after nearly five years of dating; the couple pictured in 2019 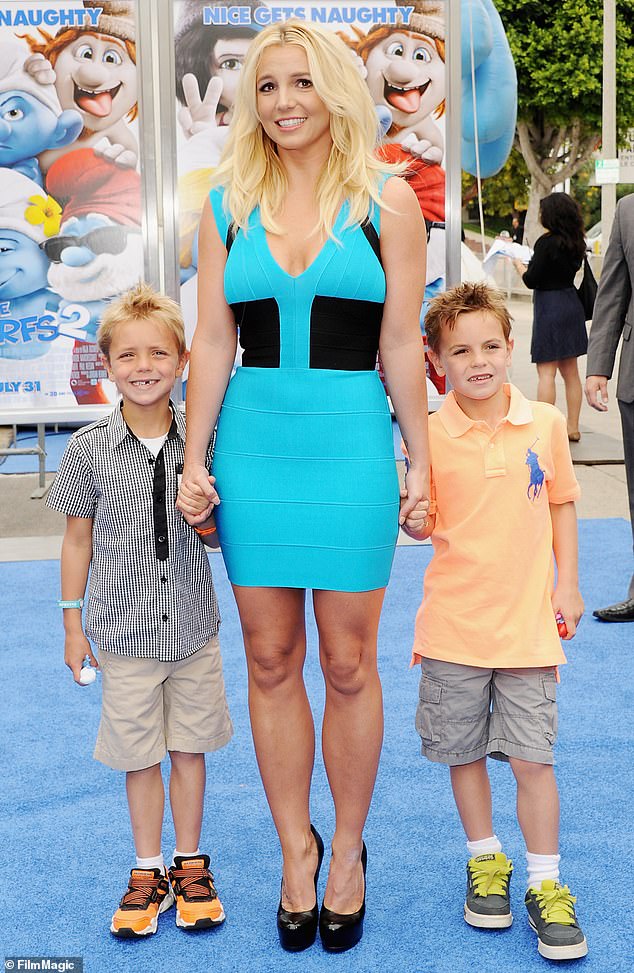 Motherhood: Britney seen with sons Sean Federline and Jayden Federline at the Smurfs 2 premiere in 2013

Spears added that she ‘was like f***ing devil’ and ‘mean as hell’ during her first two pregnancies.

‘It was beyond me … I think the thing that made people so uncomfortable was the fact I was unbelievably SILENT !!!

‘But geez my ex-husband [Kevin Federline] wouldn’t see me when I flew to New York with a baby inside me and Las Vegas when he was shooting a video !!!’ she claimed.

Britney said that it was her brother’s best friend who showed up for her and supported her as a ‘very pregnant woman in Vegas because he felt’ for her.

She also complimented the unnamed friend for playing off her strange pregnancy cravings at the time, writing: ‘[He] PLAYED IT OFF TALKING AND EATING ICE ALL NIGHT !!! I swear I like huge pickles and biting down on ice literally every day !!! I was so weird …’

Britney claimed that she’d received a text message from someone the day her brother’s best friend visited her that confirmed for her that her marriage to Kevin was over. 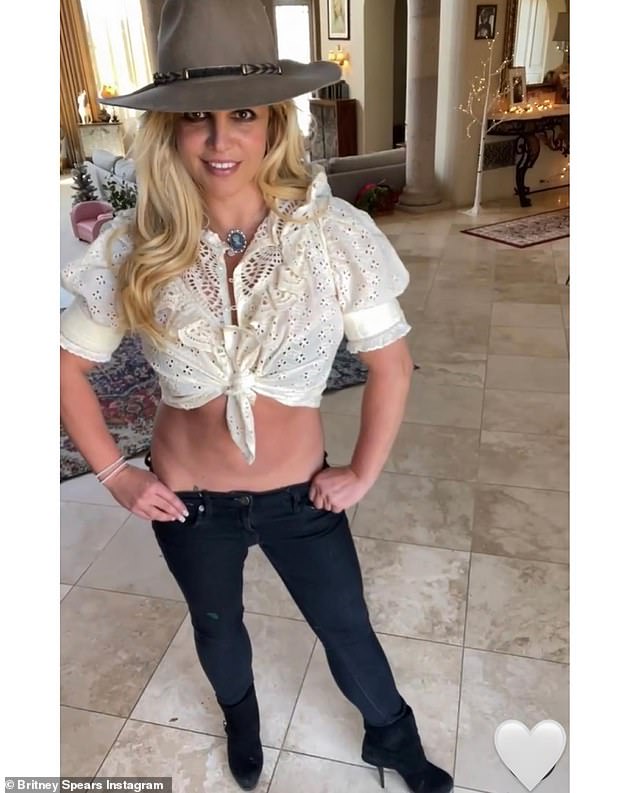 Pregnancy: Britney Spears complains pregnancy is making her ‘extremely hungry’ after ‘working hard’ to lost weight… as her cravings for carbs kick in