Britney Spears is looking back on happier times following news of her devastating miscarriage, a month after she first revealed she was pregnant.

Just ten days after announcing the loss of her first child with fiance Sam Asghari, the 40-year-old pop star shared a video of herself dancing in a yellow crop top and a pair of tiny black shorts from January.

‘4 months ago … I thought my hair looked dope [shrug emoji],’ she captioned a clip of herself showing off her moves in her living room.

The video was shared amid reports that the Toxic singer is being courted by hotel Resorts World to embark on another lucrative Las Vegas residency. 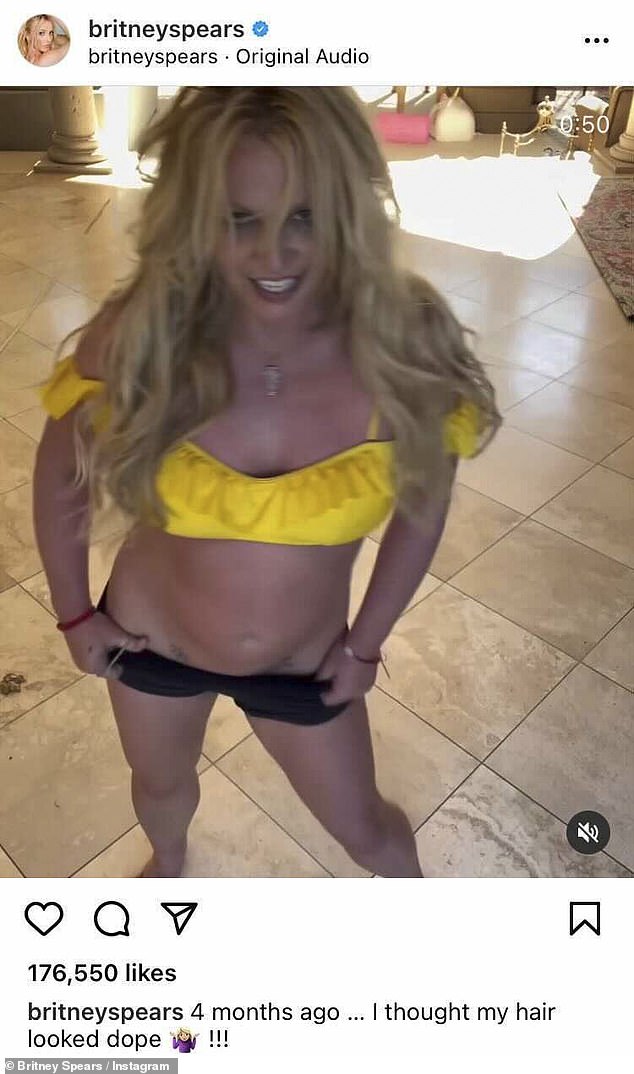 Latest update: Britney Spears is looking back on happier times following news of her devastating miscarriage, a month after she first revealed she was pregnant

The Sun reports a source claiming: ‘The buzz around Las Vegas is that they want Britney badly for a new residency.’

The source added: ‘They are wining and dining her on these getaways and showing her just how much they mean business.’

Britney and her fiancé Sam were recently seen staying a $15,000 a night suite the hotel allegedly gifted her.

‘This was Britney’s second trip to Resorts World this past weekend with her boyfriend Sam and notably her agent.’

Meanwhile, it has been an especially tough time for the singer, who announced the sad news about her miscarriage in a statement posted to her Instagram account on May 14. 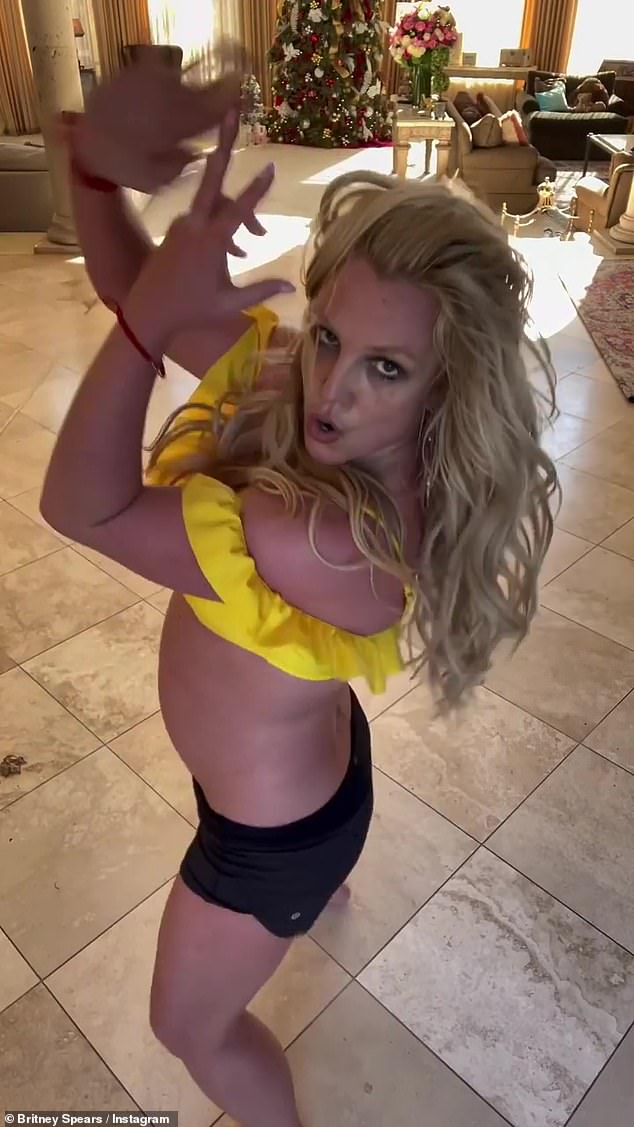 Dancing away the pain: Just ten days after announcing the loss of her first child with fiance Sam Asghari, the 40-year-old pop star shared a video of herself dancing in a yellow crop top and a pair of tiny black shorts from January 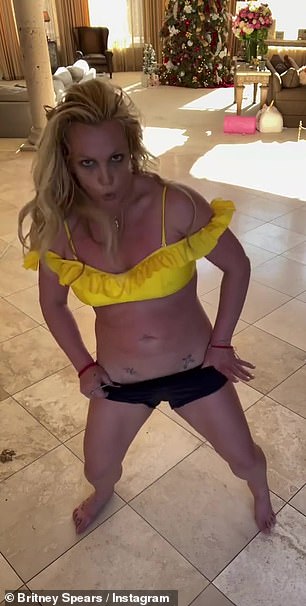 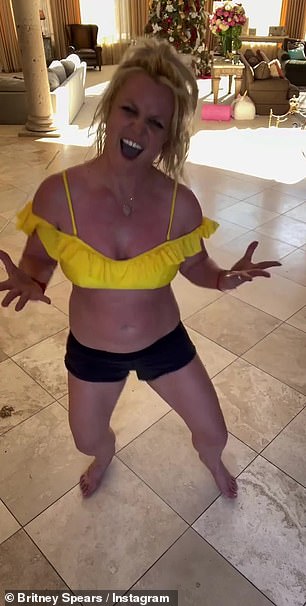 ‘4 months ago … I thought my hair looked dope [shrug emoji],’ she captioned a clip of herself showing off her moves in her living room

‘It is with our deepest sadness we have to announce that we have lost our miracle baby early in the pregnancy,’ the message read.

‘This is a devastating time for any parent. Perhaps we should have waited to announce until we were further along however we were overly excited to share the good news.’

The couple said they would continue in their attempts to have another child. 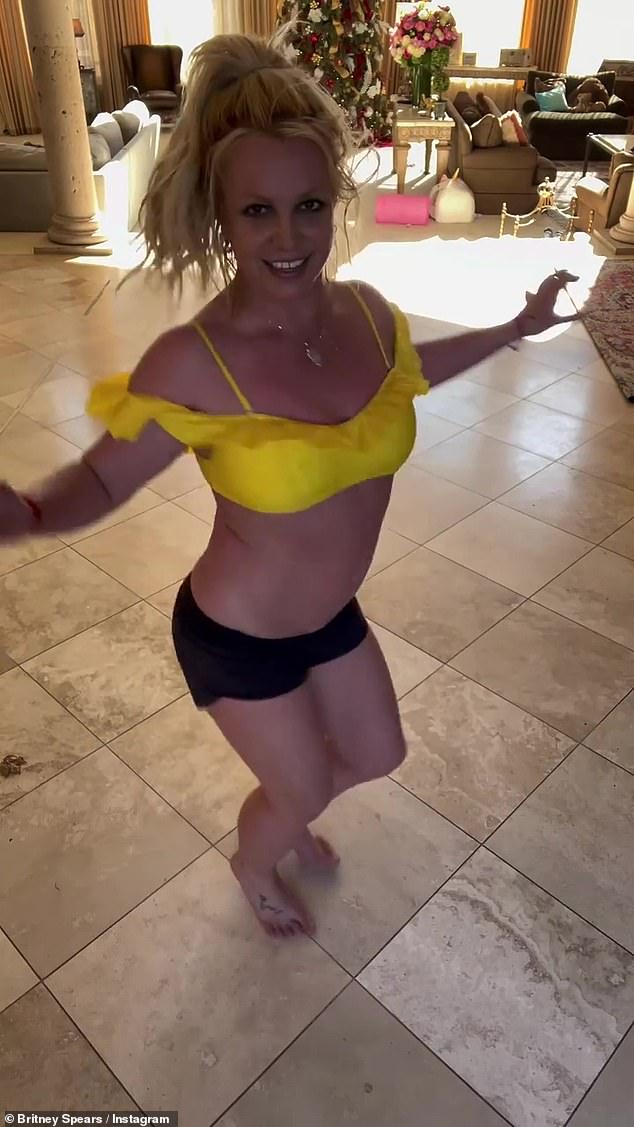 Bombshell: At one point, she can be seen pulling down her bottoms dangerous low while flipping her hair and releasing her blonde tresses from her ponytail

‘Our love for each other is our strength. We will continue trying to expand our beautiful family. We are grateful for all your support. We kindly ask for privacy during this difficult moment.’

The message was signed off by Britney and her fiancé.

‘We are grateful for what we have in the process of expanding our beautiful family,’ she captioned the post. ‘Thank you for your support.’ 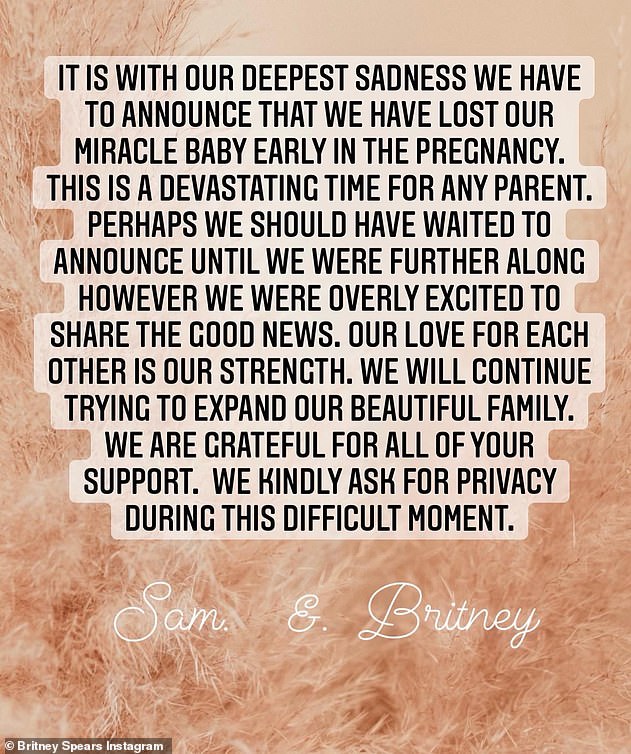 The singer, who announced she and fiancé Sam Asghari were expecting their first child together last month, announced the sad news about her miscarriage in a statement posted to her Instagram account on May 14

Sam, who also posted the statement to his account, commented on Britney’s post: ‘We will have a miracle soon (red heart emoji).’

‘I lost so much weight to go on my Maui trip only to gain it back,’ she posted at the time. ‘… I thought ‘Geez … what happened to my stomach ???’ My husband said ‘No you’re food pregnant silly!!!’ So I got a pregnancy test … and uhhhhh well … I am having a baby. 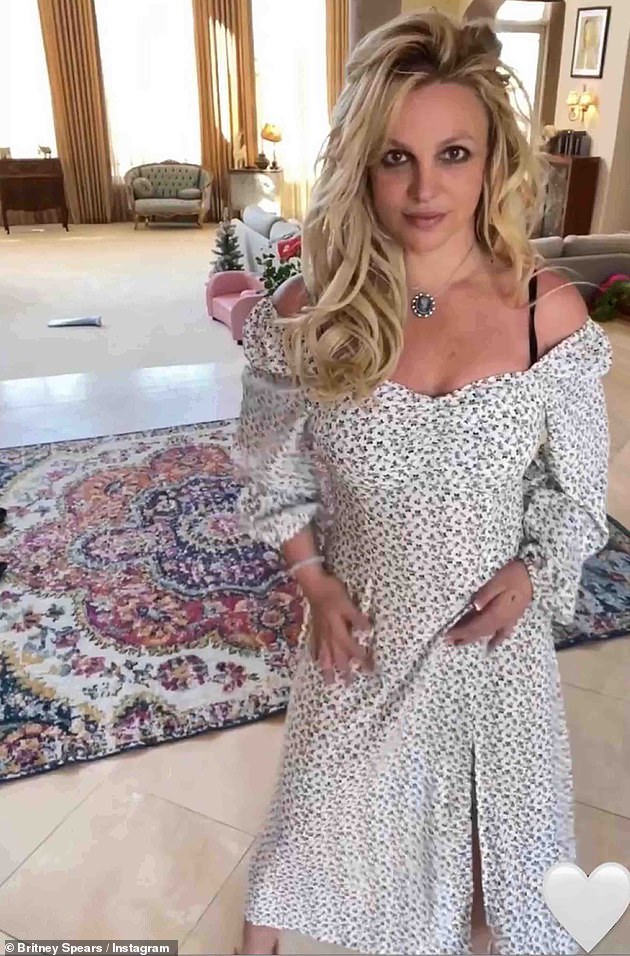 ‘Our love for each other is our strength. We will continue trying to expand our beautiful family. We are grateful for all your support. We kindly ask for privacy during this difficult moment,’ the couple said in a joint statement on social media

Britney already has two children from her previous marriage to Kevin Federline, sons Jayden, 15, and Sean, 16.

The Toxic singer had been updating fans on her pregnancy on her Instagram account these past few weeks. 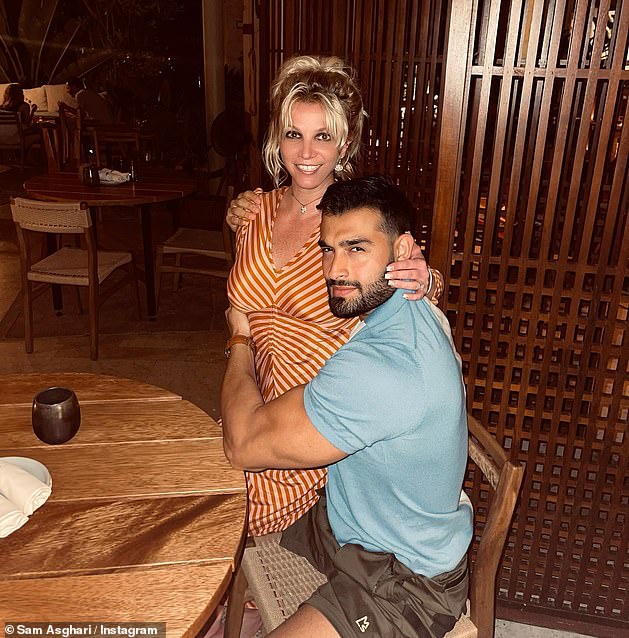 Controversy: Last year Britney claimed she was forced onto birth control while she was under her 13-year-long conservatorship, which terminated last November

In a recent post, she discussed her mood swings and food cravings.

Britney already has two children from her previous marriage to Kevin Federline, sons Jayden, 15, and Sean, 16.

The Toxic singer had been updating fans on her pregnancy on her Instagram account these past few weeks.

In a recent post, she discussed her mood swings and food cravings. 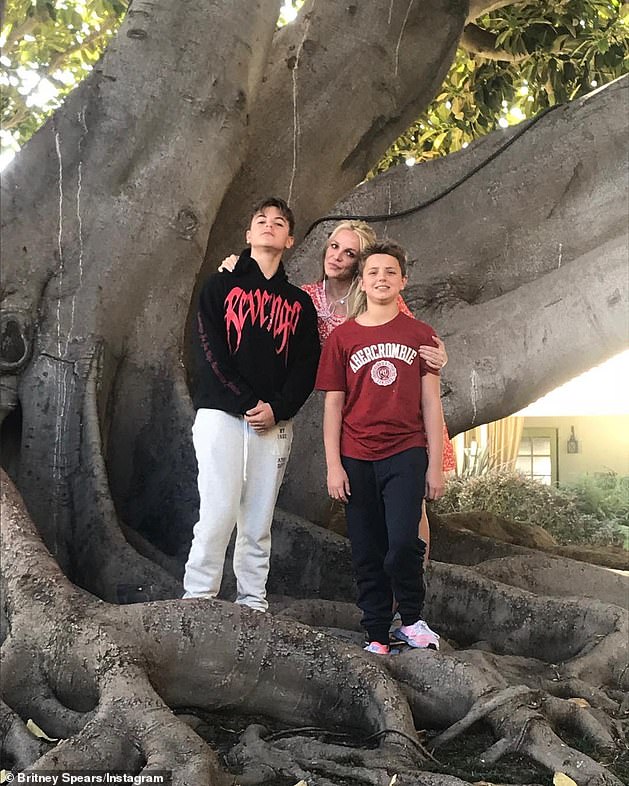 With her boys: The songstress pictured with her sons Jayden and Sean

In a court hearing in June last year, Britney spoke out against her conservatorship publicly, as she said she feels ‘traumatized’ by the controlling system she has been placed under.

She said: ‘I am not happy, I can’t sleep. I’m so angry, it’s insane. And I’m depressed. I am traumatized. I just want my life back.

The Sometimes hitmaker accused her father and her conservatorship team of refusing to allow her to marry her boyfriend or have children with him.

TIMELINE OF BRITNEY’S COMPLEX CONSERVATORSHIP AND HOW IT BEGAN

Britney with her father, brother and mother in 2006. Her parents separated

Britney breaks up with Justin Timberlake around the same time.

2007: Britney, struggling through a custody battle and split with Kevin, shaves her head and attacks a paparazzo’s car.

2008: Jamie Spears files for conservatorship of Britney, claiming she is not legally well enough to make her own decisions.

Britney in 2008 for a custody hearing as part of her split with Kevin Federline. Jamie Spears in court in 2008 getting the conservatorship

The conservatorship – which had been temporary – is extended  every year.

In court papers, Jamie’s attorneys describe how she is making more money.

JANUARY 2019: THE ARRANGEMENT STARTS TO CRUMBLE

Britney in 2019, in the grips of the conservatorship, in Las Vegas at her residency

Jamie files paperwork asking for the conservatorship to be extended beyond California, to apply in Hawaii, Louisiana and Florida as well.

He steps down as her primary conservator after allegations he abused one of her sons but is still listed as one of those in charge.

EARLY 2020: Britney, Jamie and Jamie-Lynne are in Louisiana together for two weeks.

The #FreeBritney movement is picking up.

Jamie’s attorneys claim everyone is happy together and enjoying spending time together in quarantine.

NOVEMBER 2020: Britney’s attorneys claim in papers that she is afraid of her father and asks for Bessemer Trust to be put in charge.

Her fans start speculating over her cryptic Instagram posts and videos that she wants a way out.

DECEMBER 2020: The conservatorship is extended until September 2021.

The conservatorship that Britney was put under is ordinarily used in situations where older, perhaps senile people, can no longer look after their own affairs.

Fans are concerned for her well-being and have demanded that she be released from the control of her father, Jamie

It gives control over to an appointed conservator for the best interest of the recipient but in most cases, the recipient is not healthy enough to make their own money, unlike Britney who makes millions. Under the rules of the probate conservatorship, Jamie now has equal control over her estate to a third party and an attorney, Andrew Wallet.

He, Jamie and the third party who was brought on recently can make deals on her behalf and restrict her visitors.

Britney and her boyfriend Sam Asghari

In an emotional testimony, Britney told the court that she had suffered psychologically for years as a result of the conservatorship which she said was so restrictive, she wasn’t allowed to remove her IUD birth control.

She doesn’t say why but she does invite her attorney to file paperwork to end it, which he doesn’t.

JULY 1, 2021 – BESSEMER TRUST RESIGNS AFTER BEING PUT IN CHARGE WITH JAMIE

A day after the judge’s ruling, Bessemer Trust, which had been brought on, resigned, saying they were never aware that Britney wanted to end the conservatorship.

In a court filing, the company’s attorneys said: ‘We heard her and respect her wishes.’

Larry Rudolph wrote a letter to Jamie and the conservatorship to say he was no longer needed since Britney wanted to retire.

He said he hadn’t spoken to her for two years but had been told by others that she wanted to step down.

Sam Ingham, the attorney appointed to represent Britney in 2008, steps down after failing to file paperwork to terminate the conservatorship, despite her pleas.

A Los Angeles court granted Britney the right to choose a lawyer to help her end her conservatorship, after she told a judge the current situation was ‘allowing my dad to ruin my life.’ She chose former federal prosecutor Mathew Rosengart as her new attorney.

Singer’s semi-nude post was hailed by fans including Paris Hilton as evidence of her determination to become a ‘free woman’.

JULY 27, 2021 – LYNNE SPEARS AGREES TO TESTIFY IN SUPPORT OF HER DAUGHTER

The singer’s mother’s attack on Jamie gives her a powerful new ally in her bid to be freed.

AUGUST 12, 2021 – JAMIE SPEARS AGREES TO STEP DOWN AS CONSERVATOR

Jamie’s lawyers filed court documents saying that he will step down, and provide an orderly transition to another conservator.

He said that he was doing so because he felt a public argument with his daughter was not in her best interests.

Jamie states that his daughter ‘is entitled to have this Court now seriously consider whether this conservatorship is no longer required.’

The filing went on to say that Britney Spears’ circumstances have changed ‘to such an extent that grounds for establishment of a conservatorship may no longer exist.’

Accountant John Zabel has been named as the temporary replacement conservator.

Jamie Spears filed court documents declaring that he was leaving the arrangement immediately, handing over all documents, and not seeking any financial benefit.

A Los Angeles judge ordered an end to the conservatorship that controlled Britney’s life – and $60 million fortune – for the 13 years.

‘The court finds that the conservatorship of the person and estate of Britney Jean Spears is no longer required,’ Judge Brenda Penny told a LA Superior court hearing – where Britney did not appear.

‘Therefore, as of today, the conservatorship is hereby terminated.’