Brooklyn Beckham was spotted getting close to a mysterious blonde beauty as he attended actor Dan Bilzerian’s Halloween bash on Thursday.

The photographer, 20, had a biker-themed costume as he chatted to the mysterious woman, who flaunted her peachy posterior in a skimpy thong leotard.

Brooklyn’s attendance at the bash came as he dodged an awkward run-in with his ex-girlfriend Hana Cross, who arrived for Paris Hilton’s Halloween bash with her boyfriend Nassar Alfallah. 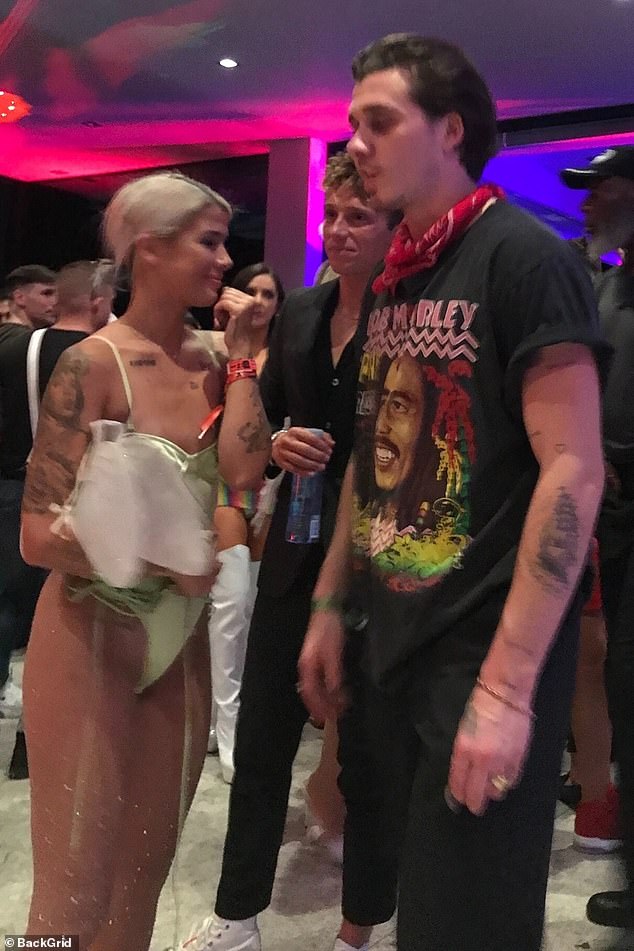 Who is she? Brooklyn Beckham, 20, was spotted getting close to a mysterious blonde beauty as he attended actor Dan Bilzerian’s Halloween bash on Thursday

Brooklyn appeared to be deep in conversation with the mystery blonde as he stood among the crowds at the party.

The blonde beauty was certainly commanding attention with her revealing cream one-piece and sparkling fishnet tights, which perfectly displayed her tattooed physique.

Her costume seemed to be alluding to the Disney fairy Tinkerbell as she carried matching wings and a green fringed skirt.

Brooklyn certainly seemed to be enjoying the blonde’s company as they chatted inside the raucous bash.

MailOnline has contacted representatives for Brooklyn Beckham for comment. 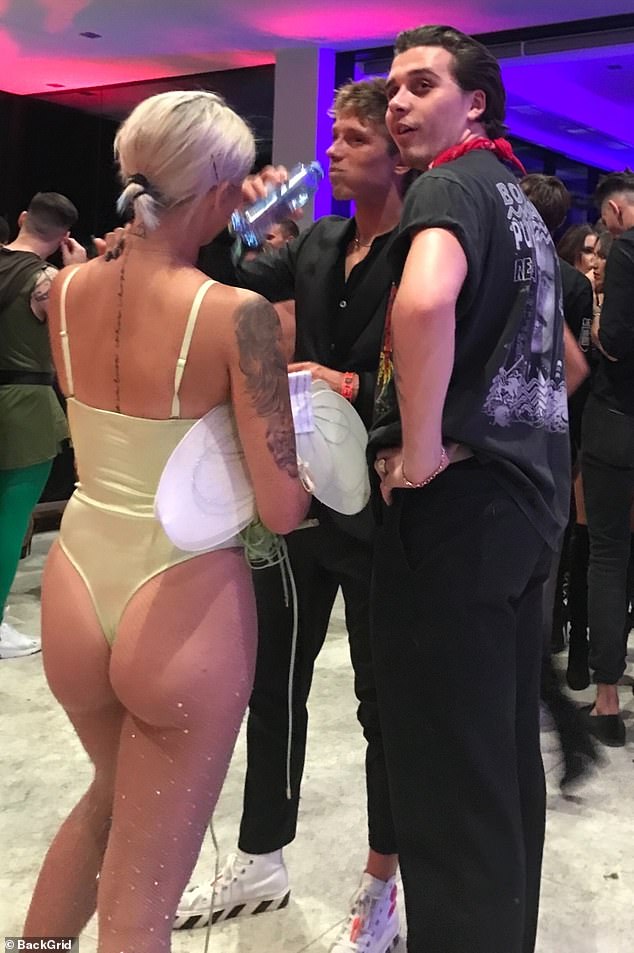 Casual: The photographer was clad in a biker-themed costume as he chatted to the blonde beauty at the party in Beverly Hills 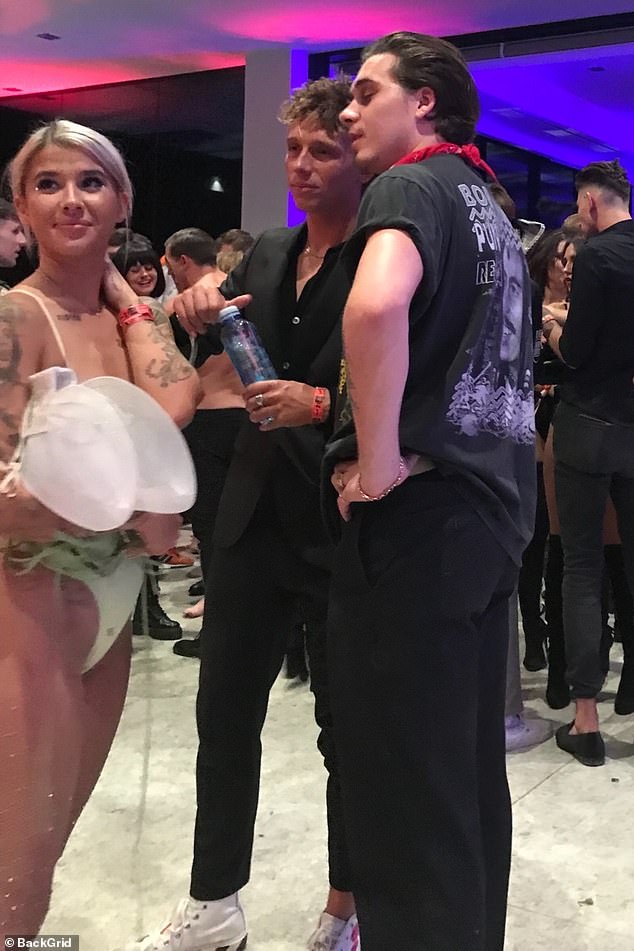 Revealing: The mystery blonde left little to the imagination in a revealing cream leotard which she teamed with sparkling fishnet tights 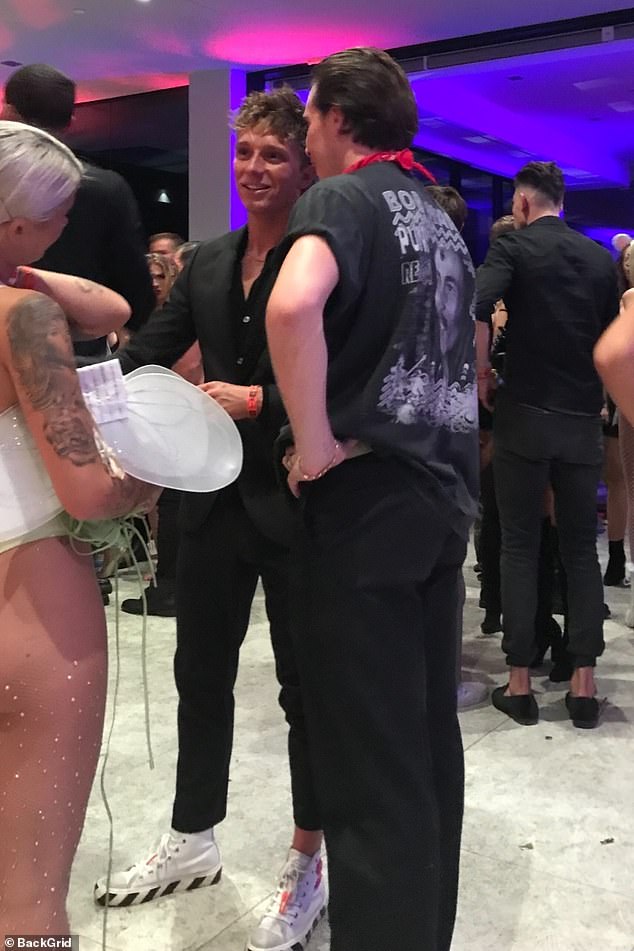 Gorgeous: The mystery beauty’s costume was alluding to the Disney Princess Tinkerbell, as she carried matching white wings 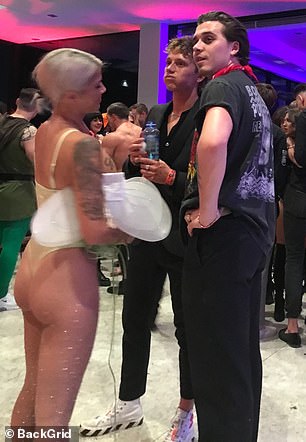 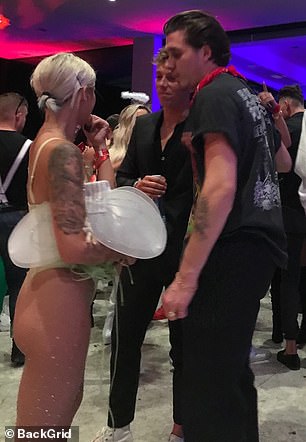 Revealing: The outfit perfectly displayed her tattooed physique as she chatted to Brooklyn inside the bash

Brooklyn’s attendance at the party came as he dodged an awkward run-in with his ex-girlfriend Hana, who arrived for the party with her hunky new beau.

The model, 22, flaunted her jaw-dropping physique in a white Native American costume, while Nassar was dressed as a cowboy.

Hana’s new love interest was recently revealed by MailOnline to be Nasser, who is a Loyola Marymount University student in Los Angeles and is originally from Kuwait.

On Tuesday, Hana was seen packing on the PDA with Nasser as they loitered around in a car park outside trendy eatery Nobu with a group of their pals. 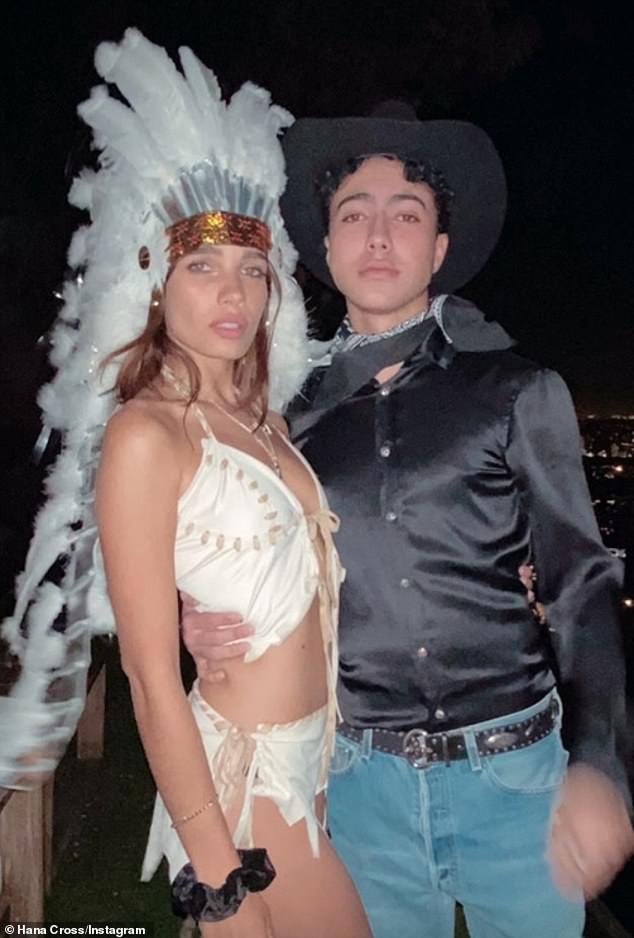 Close call: Brooklyn avoided an awkward run-in with his ex-girlfriend Hana Cross and her new boyfriend Nassar Alfallah after they both attended Paris Hilton’s Halloween party 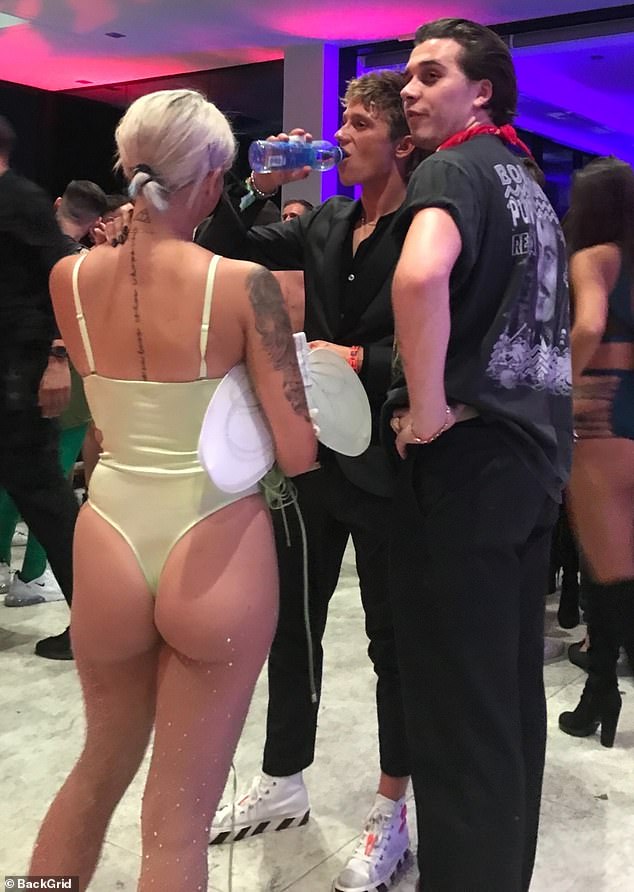 Single? It comes after Brooklyn was seen partying with stunning Canadian actress Natalie Ganzhorn, 21, at a plush Beverly Hills party over the weekend 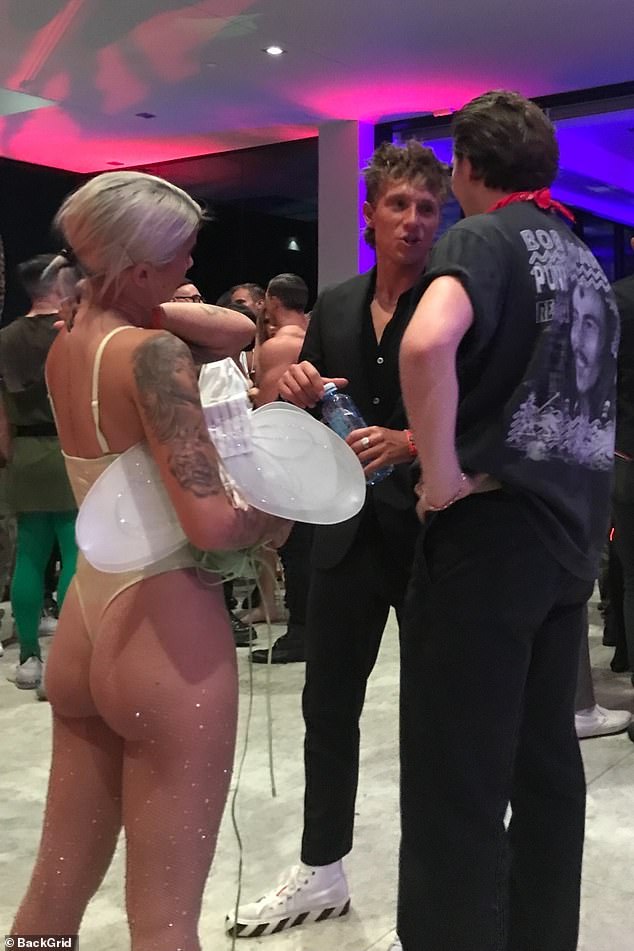 Over: The son of David and Victoria Beckham split from Hana in August after nine months together 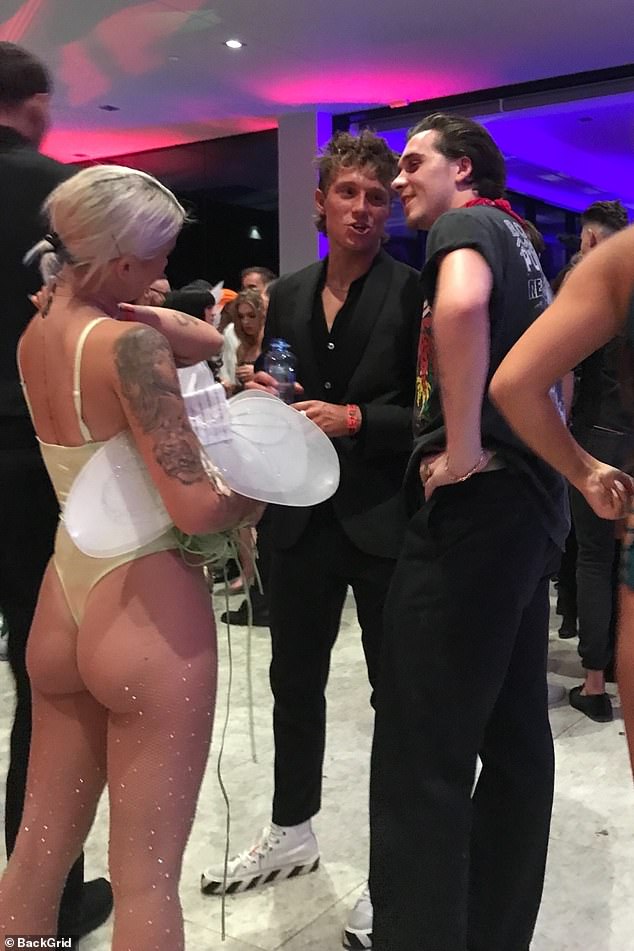 Dating: This timing of Brooklyn’s outing with Natalie crossed over with reports that he is dating brunette actress Phoebe Torrance 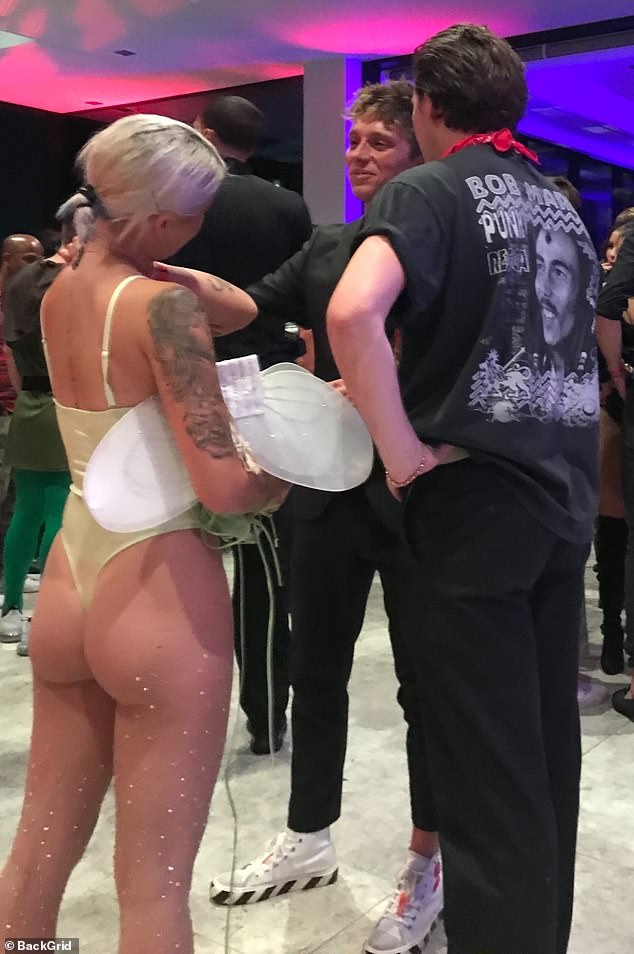 Fun: It remains to be seen whether Brooklyn has sparked a new romance, or whether he was just partying with the mysterious beauty

It comes after Brooklyn was seen partying with stunning Canadian actress Natalie Ganzhorn, 21, at a plush Beverly Hills party over the weekend.

Photos of Brooklyn emerged on Tuesday showing the aspiring photographer leaving a mansion party with a gorgeous blonde, who has been identified as rising star Natalie.

The son of Victoria and David looked close with Natalie, who boasts over 40,000 followers on Instagram and a string of acting roles.

This timing of Brooklyn’s outing with Natalie crosses over with reports that he is dating brunette actress Phoebe Torrance, 25, who previously worked as his mother Victoria’s lookalike.

Hana dated Brooklyn for nine months but became known for having several high-profile arguments in public, before splitting. 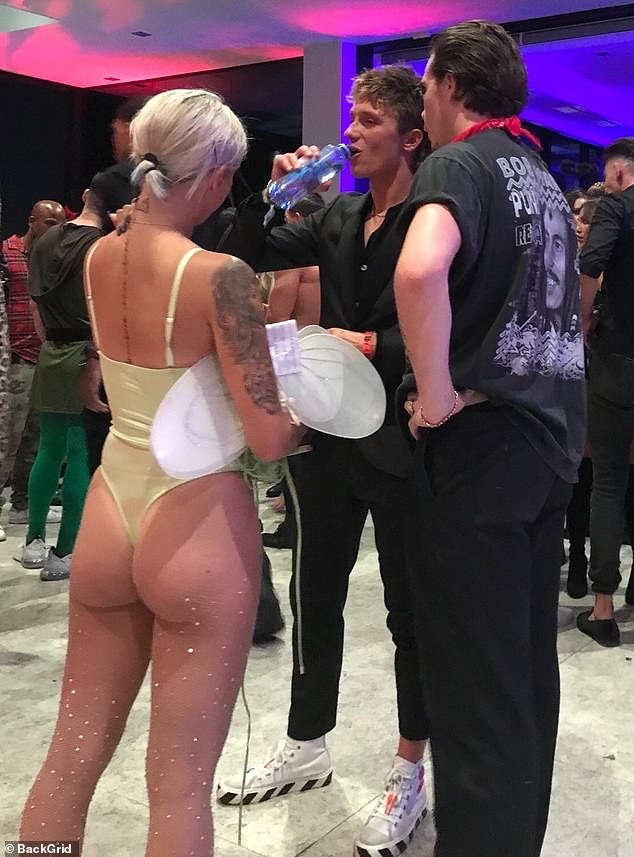 Fun: Brooklyn appeared to be party-hopping, as he was spotted arriving for Paris Hilton’s Halloween bash hours earlier