If there’s one thing that my family and friends know about me, it’s that I’m quite obsessed with fried pickles. I ask for the crunchy delicacy at every restaurant I visit, and I’m often disappointed when they aren’t on the menu. In fact, I’d rather buy a bag of fried pickle-flavored potato chips than eat at a restaurant that doesn’t sell them (drastic, I know). Thankfully, Lay’s released a potato chip flavor that tastes exactly like fried pickles dipped in creamy ranch dressing. If you’re anything like me, you’re probably wondering where to buy Lay’s Fried Pickles With Ranch potato chips. Believe me, I understand your craving.

Unfortunately, you might have to do some traveling in order to acquire Lay’s pickle-inspired product. The new bag — which was released alongside a bevy of regional potato chips flavors as part of Lay’s "Tastes of America" program — is currently available in Midwest grocery stores. According to a press release from July 2018, the flavor became available at Midwest retailers on July 30, and will remain on the shelves until Sept. 23. So, if you live in the Midwest (or are willing to take a road trip), you might be able to score a bag of the fried pickle-flavored potato chips. 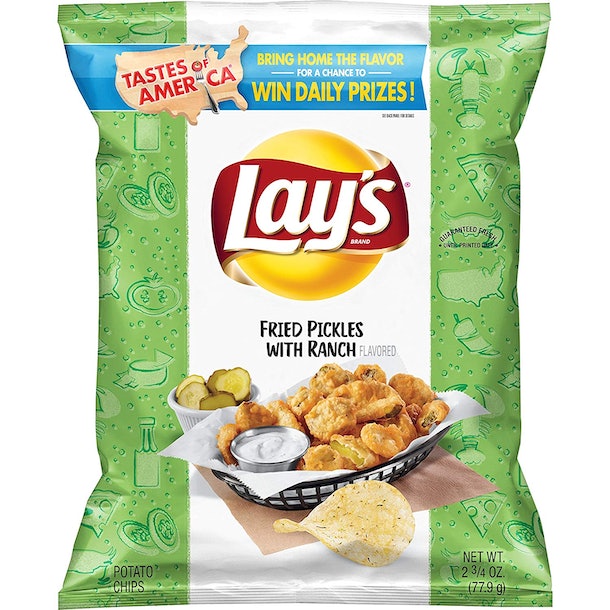 Believe it or not, there was a time (not too long ago) when you could order these babies online. Lay’s Fried Pickles With Ranch potato chips became available via the company’s Tastes of America website on July 30. However the flavor is currently out of stock. (Bummer, I know.) Elite Daily reached out to Lay’s to see if the company has any plans on restocking the flavor, but has not heard back by the time of publication.

Lay’s was generous enough to provide links to Amazon and Walmart on its website so fans could buy the flavors elsewhere, but that wasn’t good enough. The Tastes of America variety pack is currently unavailable on Amazon, so I’m assuming there was a high demand for the chips. Believe it or not, the flavors are also sold out on Walmart’s website, and I’m really upset about it. Maybe the Walmart near you has the flavors in stock, so make sure you keep checking the stores within your zip code. In order to do so, you can update your location on Walmart’s website.

If they’re unavailable, you’ll just have to "dill with it" and hope that Lay’s restocks its chips nationwide.

If you don’t live in the Midwest and are having trouble buying a bag of Lay’s Fried Pickles With Ranch potato chips, you should check out the other regional flavors that the company released. They include Cajun Spice (Central Gulf), Chile Con Queso (Texoma, Mountain, SoCal), Chesapeake Bay Crab Spice (Mid-Atlantic), Deep Dish Pizza (Heartland & Mid-America), New England Lobster Roll (Northeast), Pimento Cheese (Southeast), and Thai Sweet Chili (Pacific Northwest). Believe it or not, the only flavor that’s still available on Lay’s website is the Chile Con Queso, so order a bag while you still can.

If Chil Con Queso isn’t your thing, plan your trip to the Midwest so you can grab a bag of Lay’s Fried Pickles With Ranch potato chips. If a road trip is out of the question, maybe you can just settle for real fried pickles in the meantime.