Cara Delevingne was one of the many celebrities in attendance of Princess Eugenie’s wedding to Jack Brooksbank at Windsor Castle on Friday morning.

And taking to Instagram following the Royal nuptials, the model, 26, amused her followers by sharing a snap of herself, her sister Poppy Delevingne and their friends passed out on the sofa.

Giddy from all the excitement of Eugenie’s big day, Cara was seen napping still sporting her uniquely chic wedding ensemble while Poppy dozed in her pyjamas. 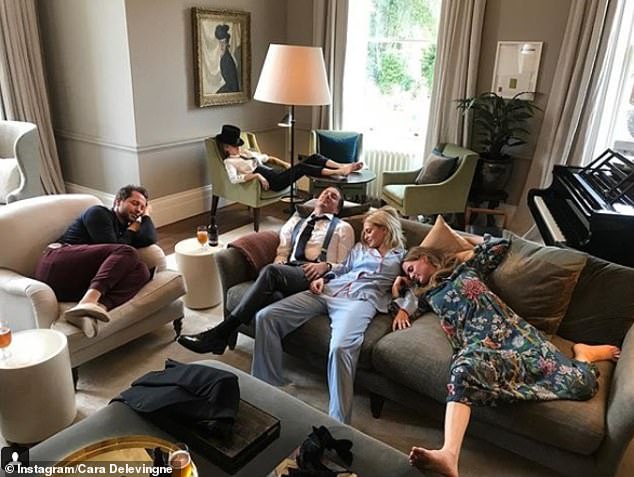 Too much excitement? Cara Delevingne shared an amusing photo of herself and her sisters Poppy (centre) and Chloe (far R) passed out following Princess Eugenie’s wedding on Friday

Returning from the elegant wedding ceremony that took place within St George’s Chapel, Cara had shed her blazer jacket and was seen propped up between two seats with her top hat covering her face.

The Paper Towns actress had kicked off her shoes and appeared to be getting some shut eye, along with her siblings and their famous friends.

While Poppy, 32, had changed out of her wedding attire to rest in the comfort of her pyjamas, the girls’ older sister Chloe, 33, was sprawled out alongside her in her patterned frock. 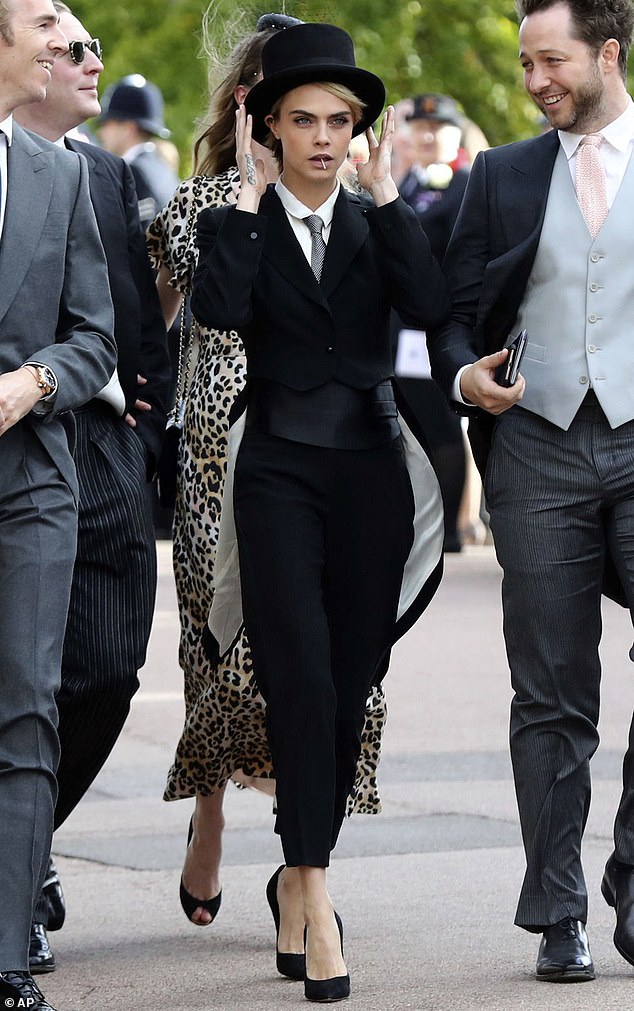 Wedding: Cara was among the attendees at Princess Eugenie and Jack Brooksbank’s wedding, held at St George’s Chapel at Windsor Castle on Friday morning

On the other side of Poppy was David Gardner, Liv Tyler’s husband of four years, with Cara revealing the Lord Of The Rings actress had been the one to capture the hilarious snap.

Cara’s upload comes after she turned heads at Princess Eugenie’s wedding as she chose to buck convention by wearing a top hat and stylish black morning suit.

Her ensemble of choice was given a number of customised tweaks for the occasion, including a cropping of the morning coat and trousers. 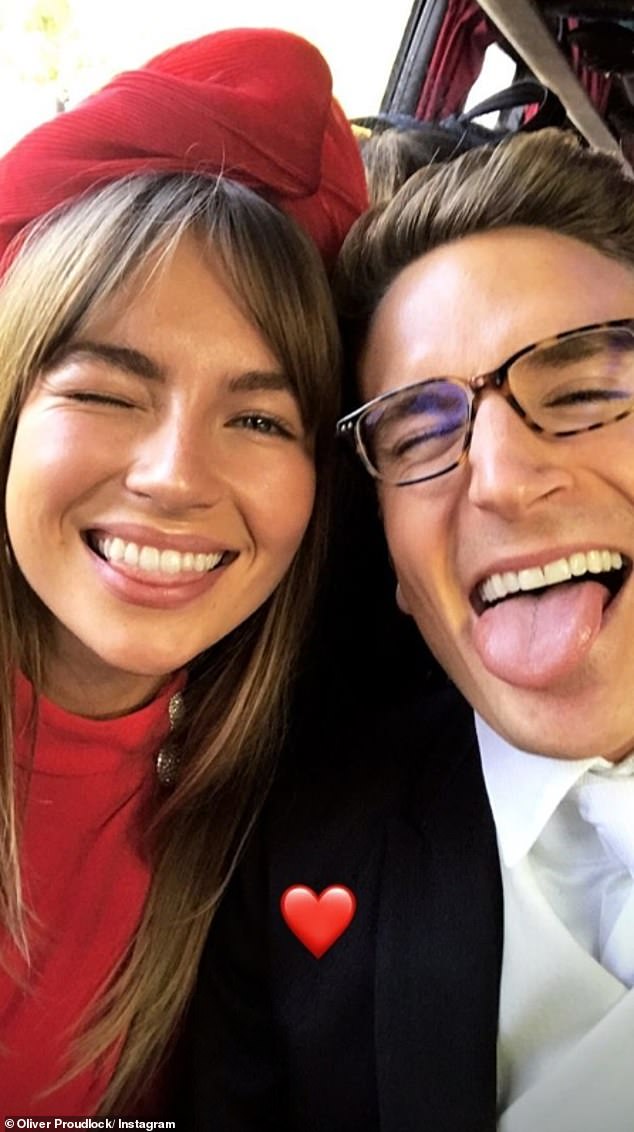 Proudlock to be invited: MIC star Oliver shared a picture of himself and girlfriend Emma Louise Connolly on Instagram stories 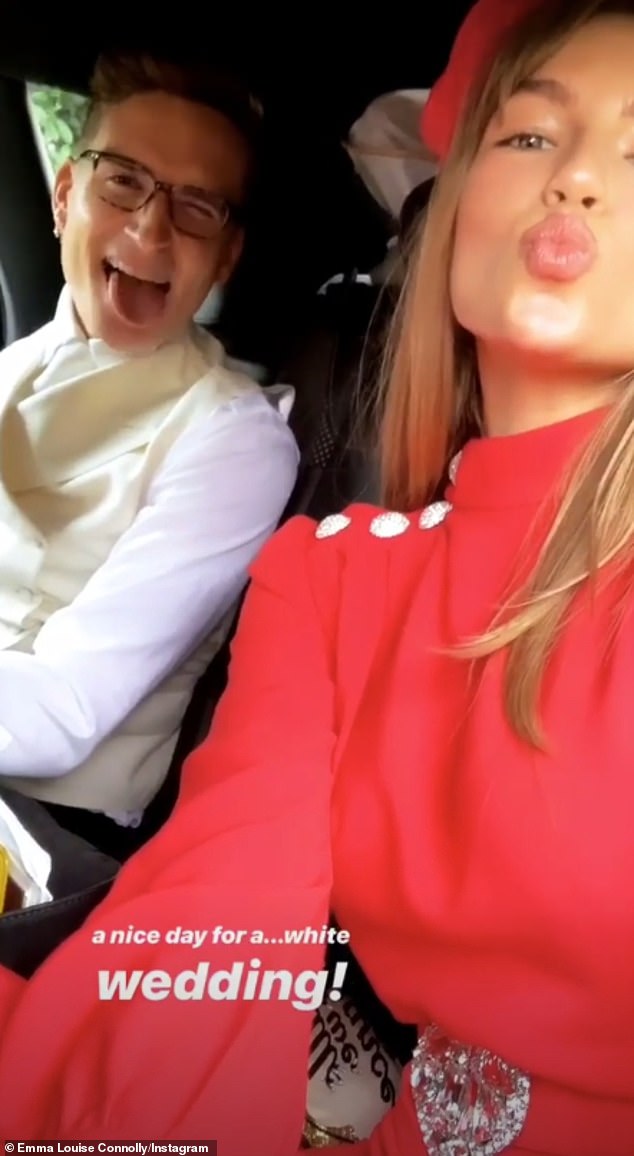 A host of other A-list attendees shared giddy pictures on social media.

Oliver Proudlock and Emma Louise Connolly shared snaps of their outfits, with Emma writing: ‘It’s a nice day for a white… wedding!’

Supermodel Naomi Campbell also shared a picture of the order of service.

And comedian Jack Whitehall shared a snap of himself and Jamie Redknapp posing in front of Windsor Castle.

He hilariously wrote: ‘Royal Wedding, Windsor Castle, in the presence of the Queen and I end up sat next to low rent footballer. I had to start pretending he was a dignitary called Rupert Redknapp The Duke of Hampton.

‘An incredible day, seeing two of the kindest and most lovely people in the world tie the knot. Wish them a very happy life together. Congrats Jack and Euge!!’ 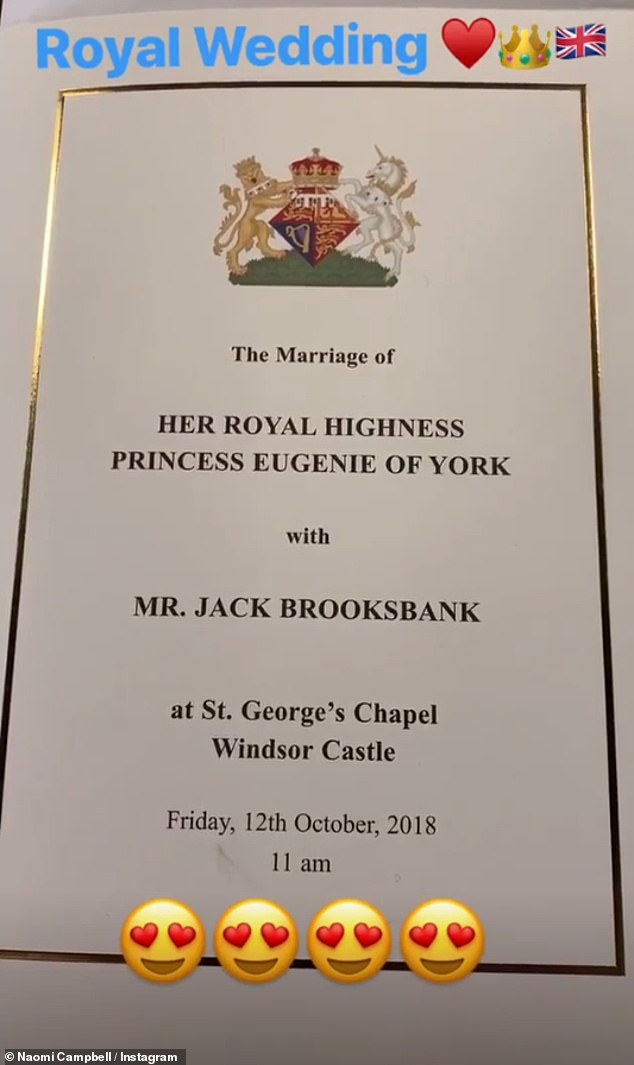 Happy to be there: Supermodel Naomi Campbell was clearly thrilled to have been invited as she shared a picture of the order of service on social media 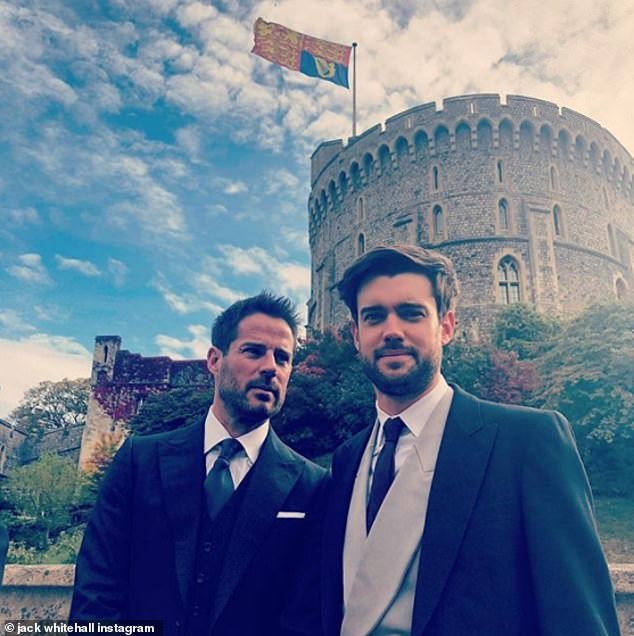 Kings of the castle: Jack Whitehall (right) shared this snap of himself and footballer Jamie Redknapp, writing: ‘Royal Wedding, Windsor Castle, in the presence of the Queen and I end up sat next to low rent footballer’ 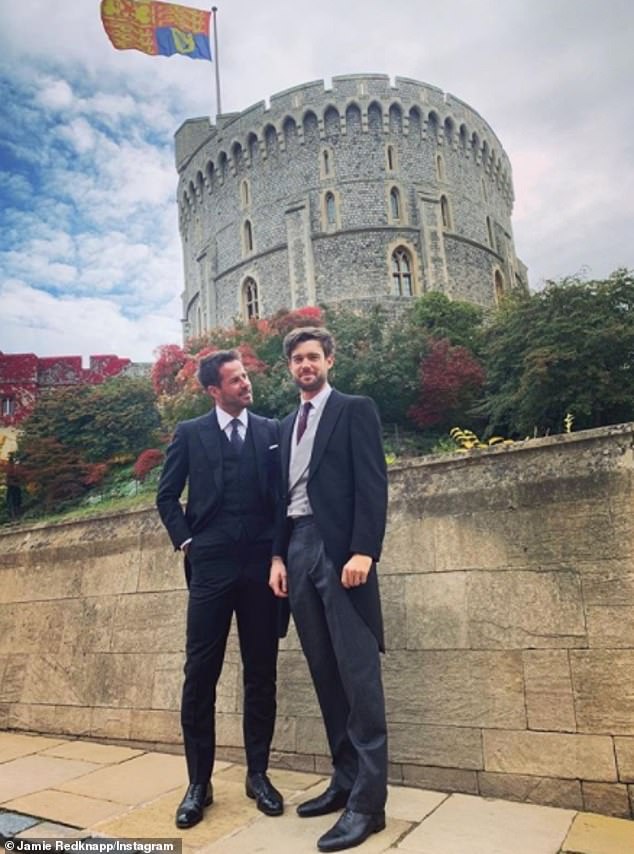 With a shimmering cummerbund accentuating her enviably tiny waist, the model and actress, who hails from British high society, complemented her ensemble with a crisp white blouse and patterned grey tie.

As she strode through the streets of Windsor with her pals, including Vanity Fair’s Derek Blasberg, the star attempted to combat the relentless gusts of wind by carefully holding onto the sides of her hat.

Standing tall in a pair of vertiginous black suede heels, Cara highlighted her natural beauty with a flattering palette of makeup that included a smokey eyeshadow, lashing of mascara and a smudge of soft pink lipstick. 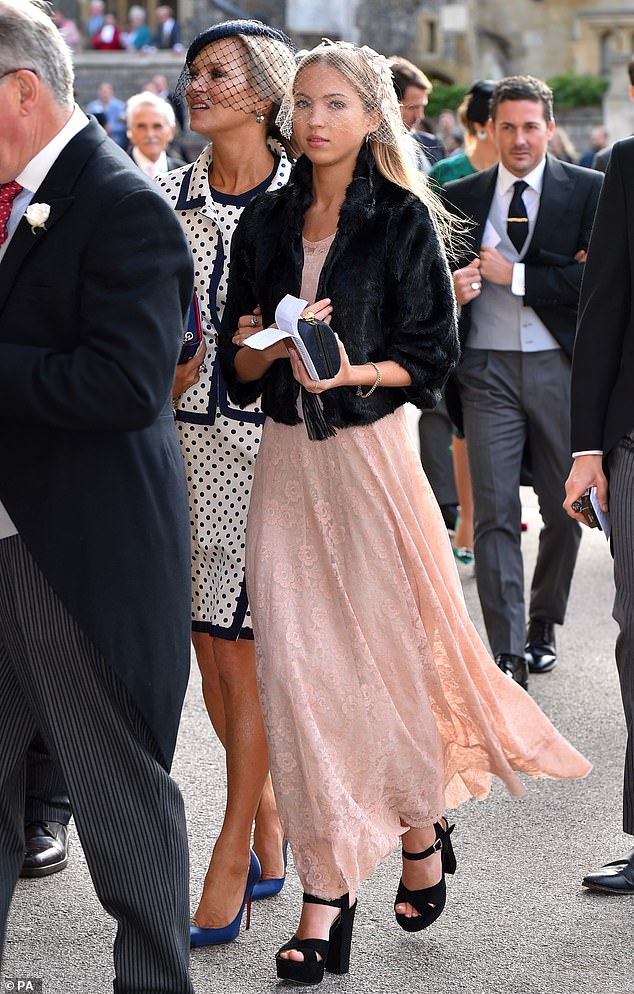 Models: Kate Moss was also seen at the nuptials, attending with her model daughter Lila Grace 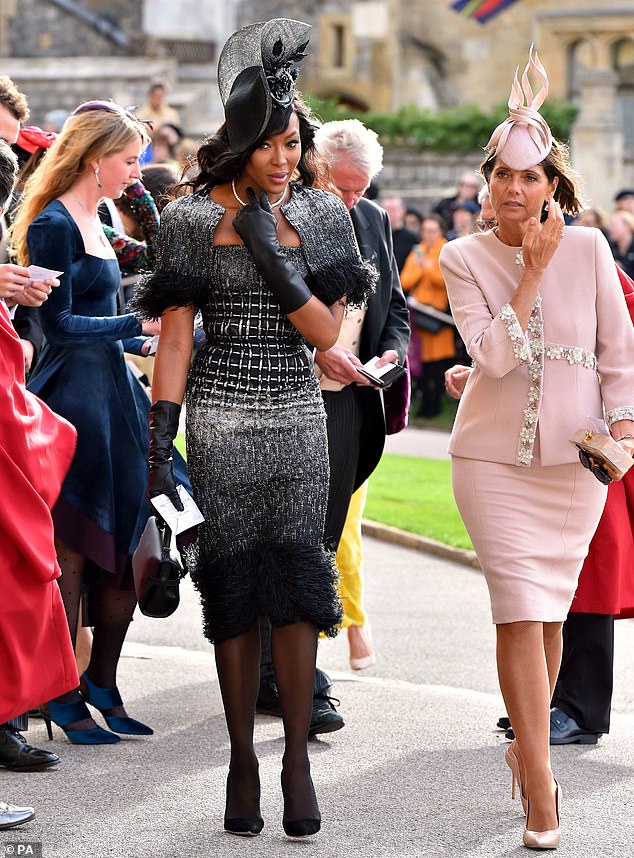 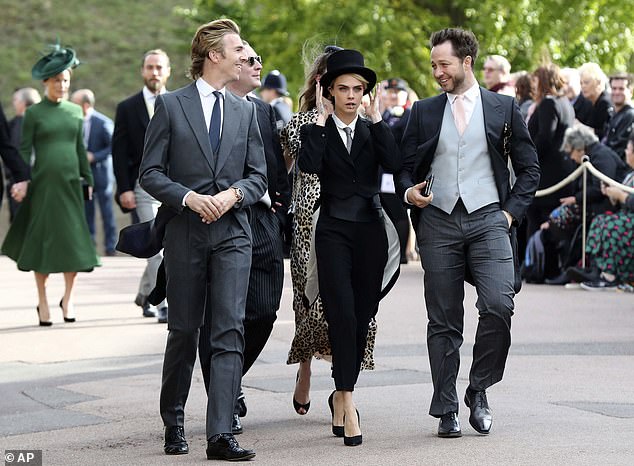 Gust of honour: As Cara walked in the blustery winds, she was sure to hold her top hat in place

Chewing on a large toothpick, the blonde beauty waved at gathered crowds of onlookers as she made her way into the star-studded ceremony. She was among a sea of celebrities and household names in attendance to watch Princess Eugenie and Jack Brooksbank exchange nuptials, including Naomi Campbell, 48, and Kate Moss, 44.

Kate caught the eye on a white-and-blue polka dot suit, which featured a blazer, top and midi skirt, all with a matching design.

Teaming her ensemble with a navy beret-style hat, from which descended an mesh veil, the Croydon native stood tall in a pair of cobalt blue heels, which perfectly matched her clutch bag.

Accessorising with a selection of elegant jewellery that included glittering drop earrings, Kate entered the storied chapel with her 16-year-old daughter Lila Grace.

Lila Grace, who is following in her mother’s modelling footsteps with a campaign for Marc Jacobs, displayed her sartorial prowess in a lacy pink gown, over which she draped a fluffy black jacket.

She added extra height to her lithe frame with a pair of strappy black wedge heels, she also opted for a veil, which sat atop her flowing golden tresses.

Not to be outdone, Naomi showed exactly why she’s continued to reign as one of the world’s top supermodels over the decades when she arrived at the wedding in style.

The British beauty was resplendent in a blended black Ralph & Russo, which boasted a thick tasselled hem and was teamed with a matching cropped cape. 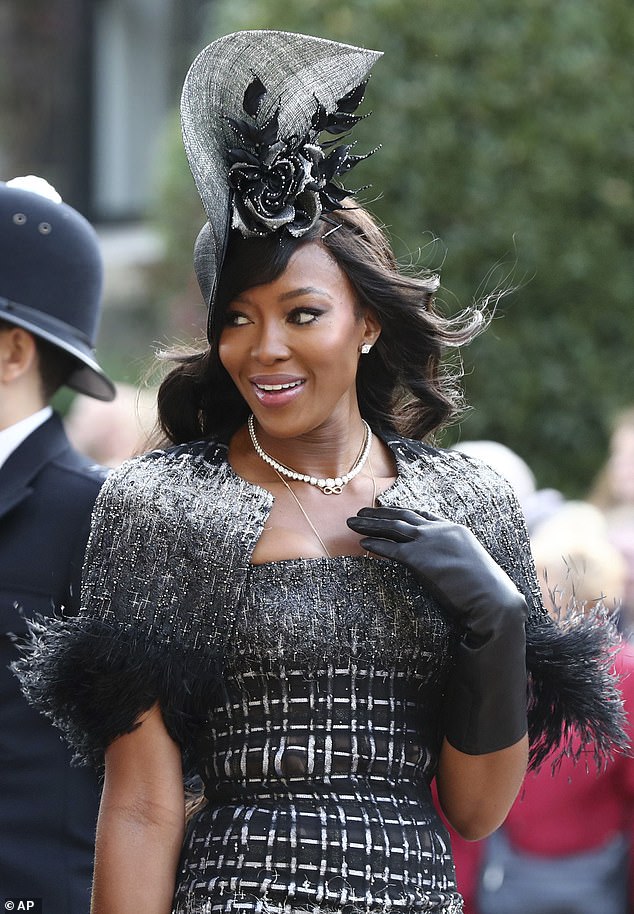 In style: Not to be outdone, Naomi showed exactly why she’s continued to reign as one of the world’s top supermodels over the decades when she arrived at the wedding in style

Resplendent: The British beauty was resplendent in a blended black Ralph & Russo, which boasted a thick tasselled hem and was teamed with a matching cropped cape 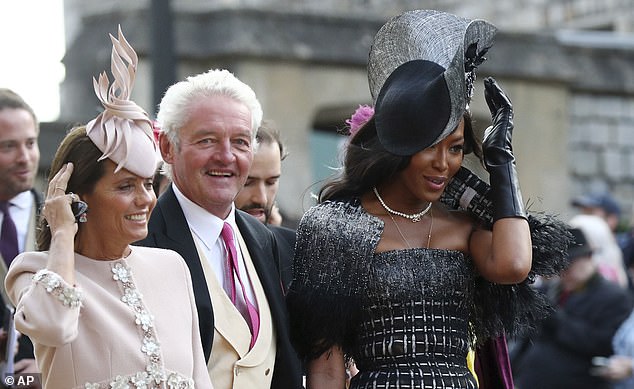 Edgy touch: With a stylish fascinator resting on her flowing raven locks, she added an edgy touch to her breathtaking outfit with a pair of black leather gloves 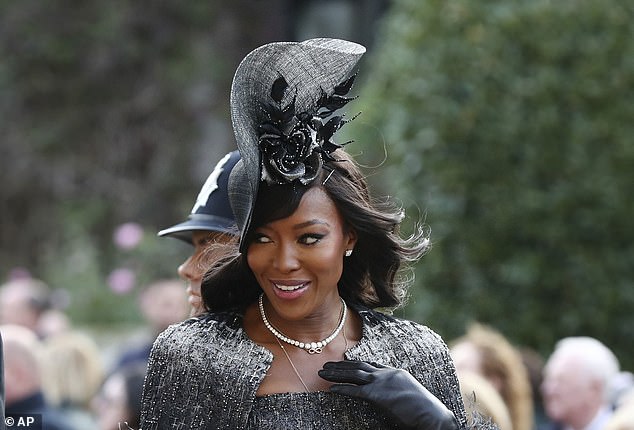 All that glitters: She accessorised with a set of glittering necklaces and angular stud earrings

With a stylish fascinator resting on her flowing raven locks, she added an edgy touch to her breathtaking outfit with a pair of black leather gloves.

Wearing black opaque tights with matching suede heels, Naomi accessorised with a set of glittering necklaces and angular stud earrings, while her famous good looks were highlighted with mascara and glossy nude lipstick.

The Queen’s granddaughter’s nuptials were held at St George’s Chapel at Windsor Castle at 11am, with most senior members of the Royal Family attending.

Heading out in their droves, celebrities arrived in force to see the divisive nuptials — which have left members of the public enraged due to the use of state funds. 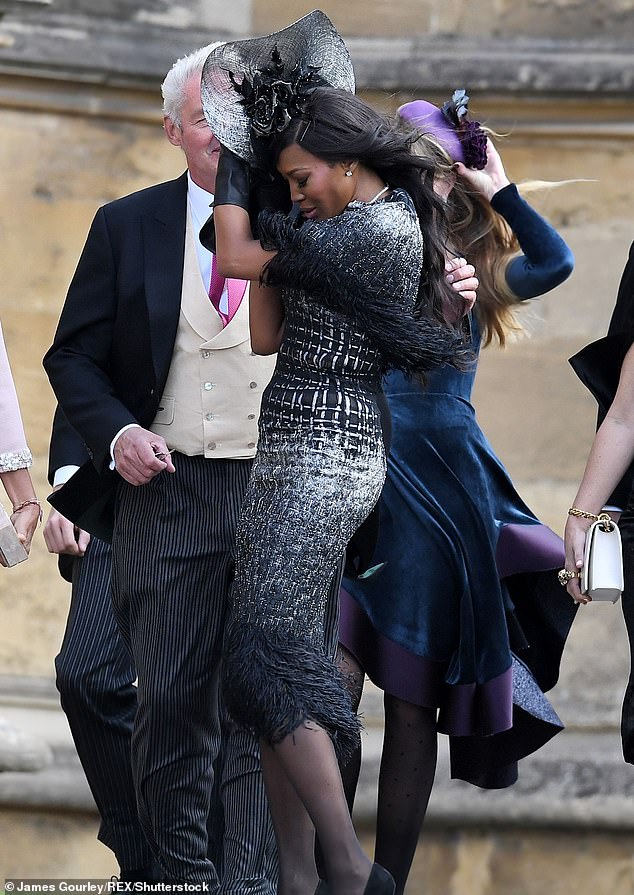 You can leave your hat on: Like so many of the guests, the runway veteran was forced to hold onto her hat as she walked through the blustery winds outside 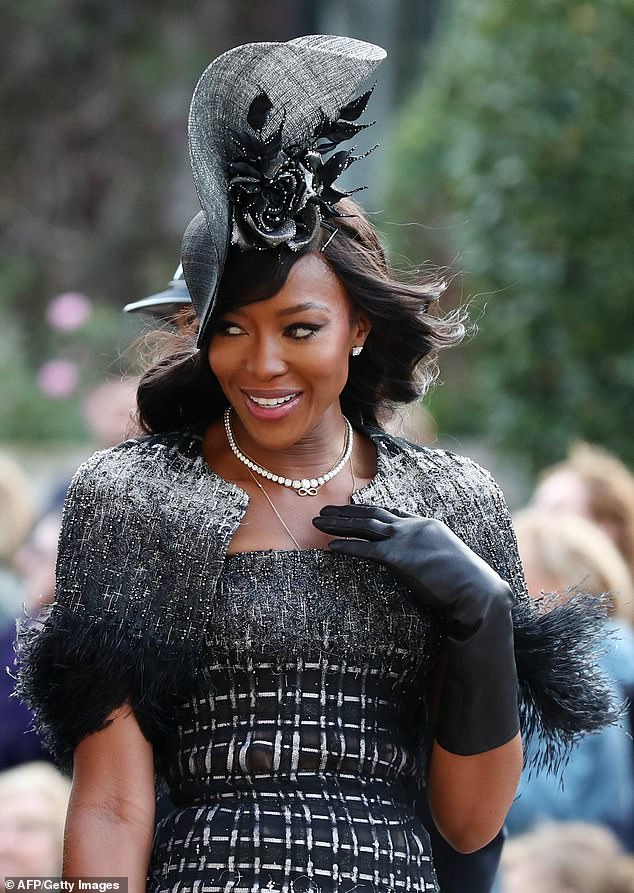 Say with with flowers: Her eye-catching fascinator featured a large rose design at the centre 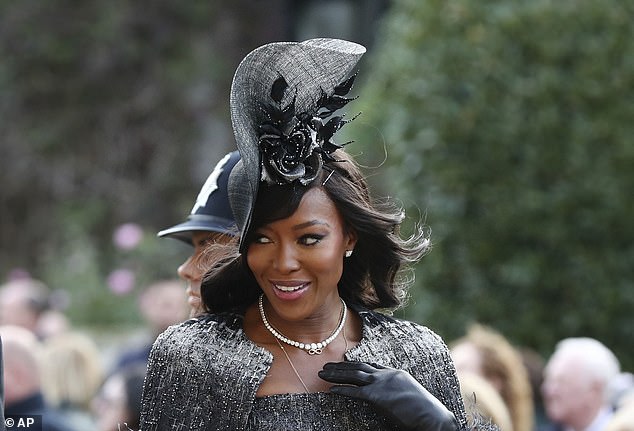 Shining: Her elegant headgear was given a further glamorous touch with light embellishments

The Princess arrived with her father in the same Rolls Royce 1950 Phantom IV that was lent to the now-Duchess of Sussex on her wedding day by the Queen.

Looking phenomenal in her Peter Pilotto off the shoulder gown with a billowing train, there was not a dry eye in the house as Princess Eugenie arrived in the church.

It was made for the monarch when she was still a Princess and the first Rolls Royce that she and Prince Philip had, a sign of how special the vehicle is.

In an interview with presenters Eamonn Holmes and Ruth Langsford, who anchored live coverage of the wedding on ITV’s This Morning, Eugenie and her fiancé described the moment they first saw each other on ski holiday in Verbier, Switzerland.

Mr Brooksbank said: ‘We were skiing in a friend’s place out in Switzerland, and [looking at Eugenie] I saw you first, didn’t I? And we just stared at each other.’ 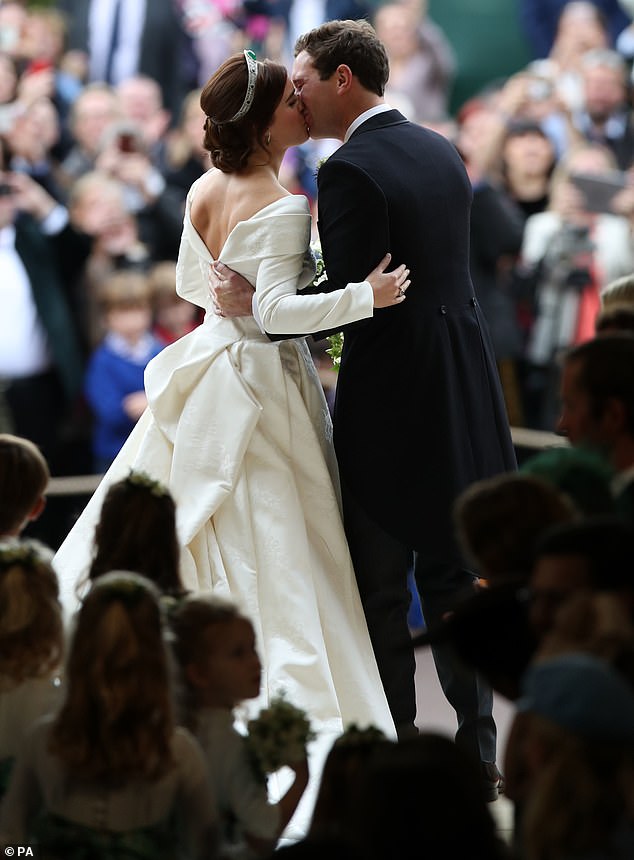 Sealed with a kiss: Princess Eugenie and Jack Brooksbank shared a kiss after marrying in front of 850 royals, aristocrats, VIPs and friends on Friday morning 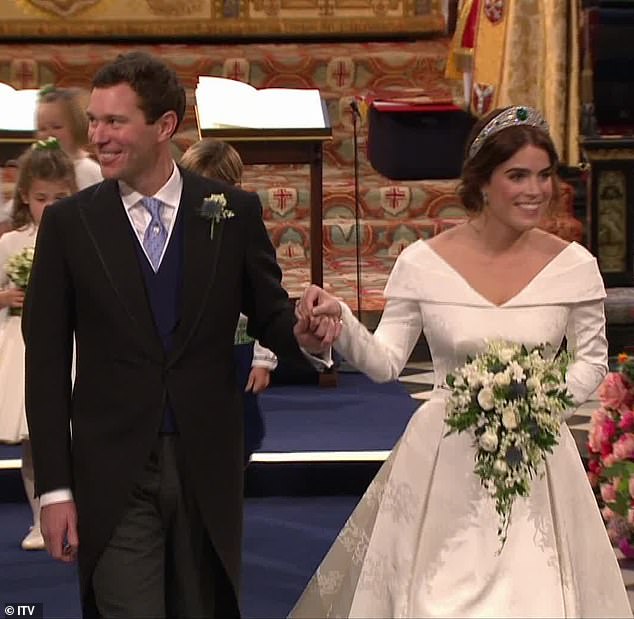 The newlyweds: The happy couple walk down the aisle and out of church after getting married in a traditional service in Windsor 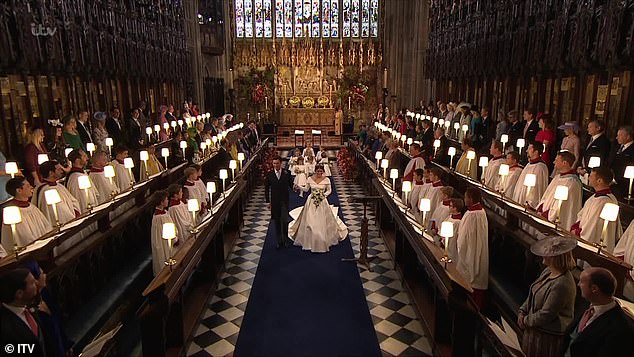 One is decidedly amused: The bride could not stop grinning at the groom during their moving service at St George’s Chapel in Windsor 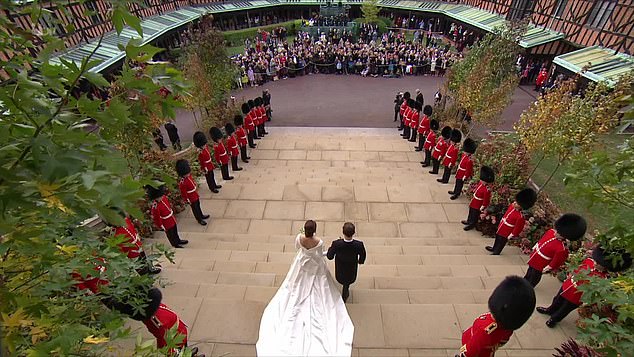 Making their grand descent: They left via the steps of St George Chapel ahead of their carriage ride through the streets of the town 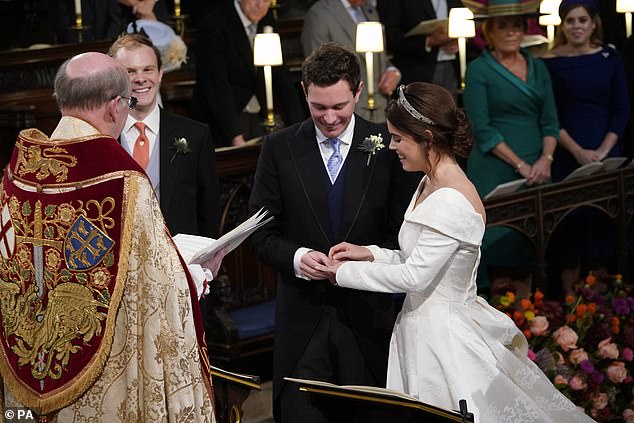 He put a ring on it: Jack put the wedding ring on Princess Eugenie’s finger as they tied the knot 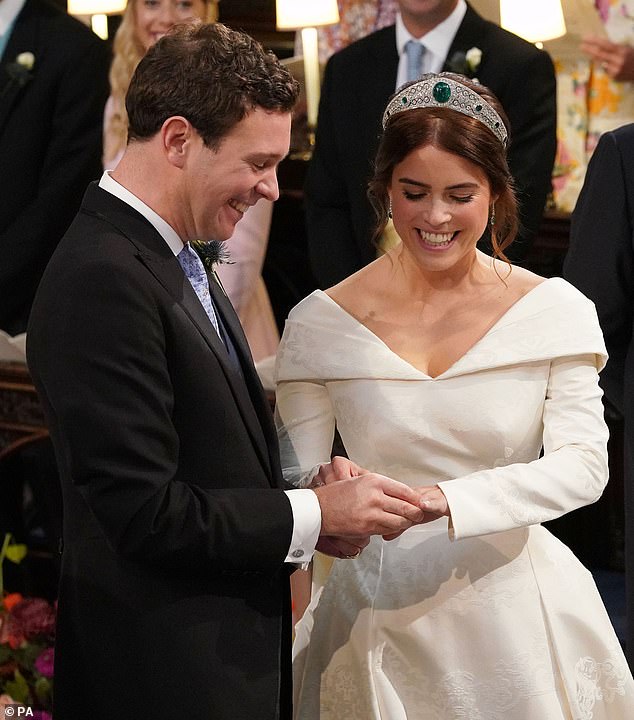 The happy couple: Jack and Eugenie smiled broadly as they exchanged rings during the televised ceremony at St George’s chapel 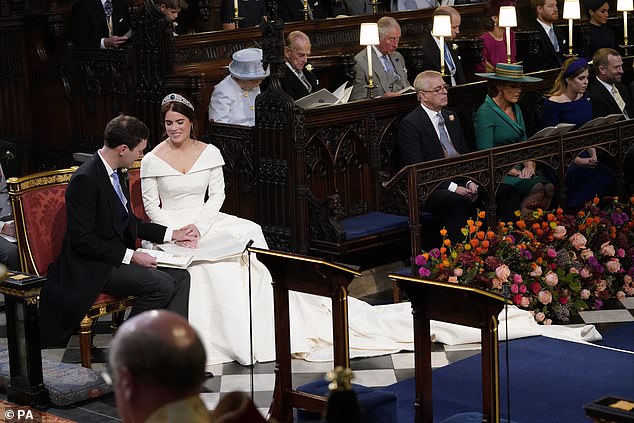 The royals: Jack and Eugenie can been seen at the top of the alter while the rest of the royals including the Queen and Prince Charles sit behind them