The actress, 53, posted a sweet smooching shot to her Instagram account on Saturday as she gushed about the milestone.

’22 years and 1 day! It’s in the fine details…love you sweetheart. Happy Anniversary,’ she captioned the shot, adding numerous heart emojis. 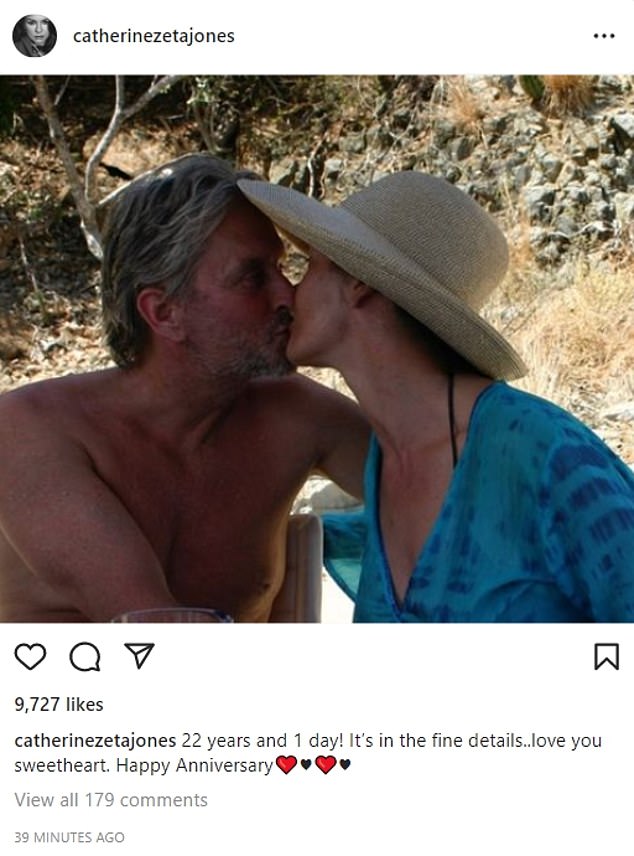 ’22 years and 1 day!’ Catherine Zeta-Jones celebrated 22 years of marriage with Michael Douglas with a heartmelting kissing shot on Saturday

In the photo, the lovebirds shared a tender smooch outside. A shirtless Michael wrapped an arm around his wife as she planted her lips on his.

Michael also marked the celebratory occasion on his Instagram a day earlier with photos from their wedding day.

‘Happy Anniversary to my darling Catherine! I love you so much @catherinezetajones ❤️ #22years,’ he wrote in the caption. 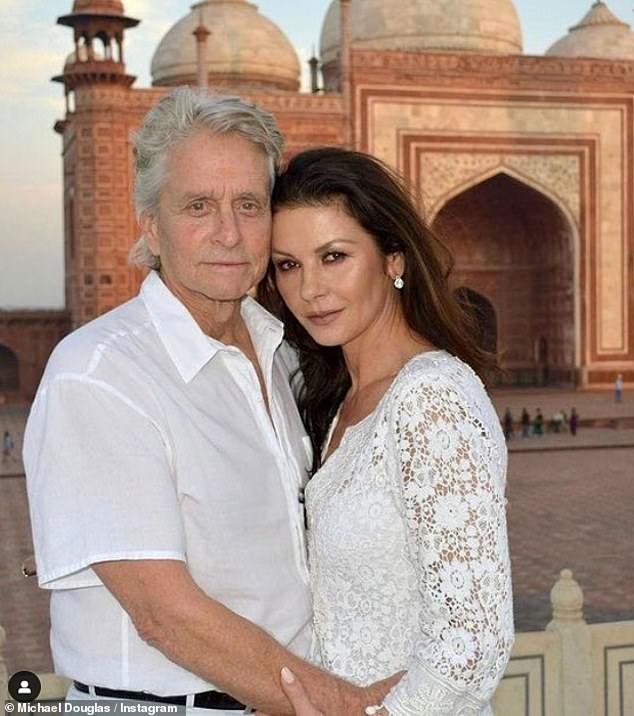 Their friends Antonio Banderas and Melanie Griffith – who used to be married – introduced the actors at a private dinner. 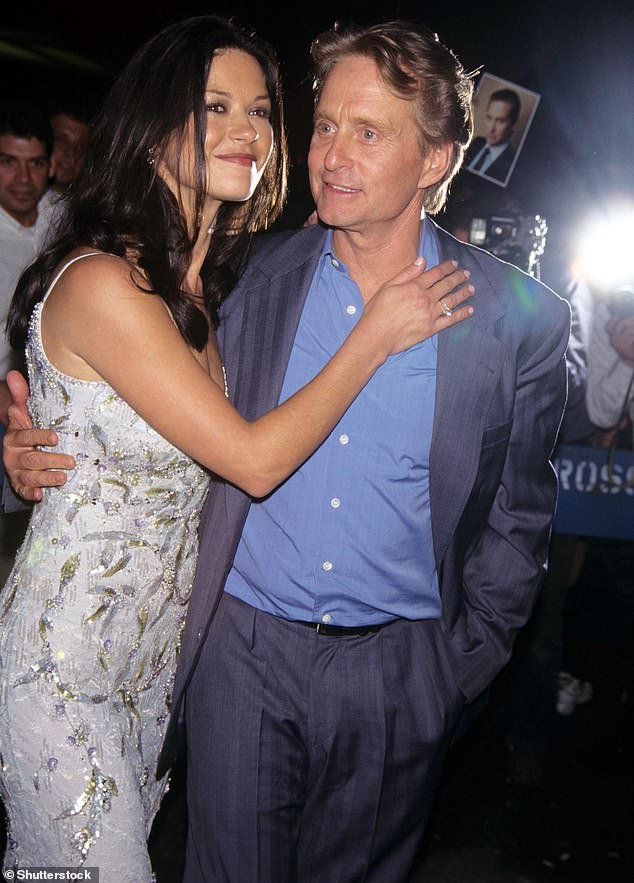 Romance: ‘We met in 1996 at the Deauville Film Festival…I think it was 1996!’ Zeta-Jones told Larry King in 2001. ‘I had been told Michael Douglas wanted to meet me. I was a little nervous because I didn’t quite know what he wanted to meet me about.’ Pictured in 1999

Michael asked Catherine if he could sit next to her.

He famously told her he was going to be the father of her children which shocked her, she has said, and he sent her flowers soon after to apologize.

They started a friendship.

‘Nine months later, I’m still having long conversations with him on the phone, having great dinner dates, constantly wondering, “Why are we not together?”‘ she told King.

‘We looked at each other one day and said, “We’re having a lot of fun together,”‘ she said.

Douglas proposed to Zeta-Jones at his Aspen home on New Year’s Eve in 1999 with a $1 million diamond ring. 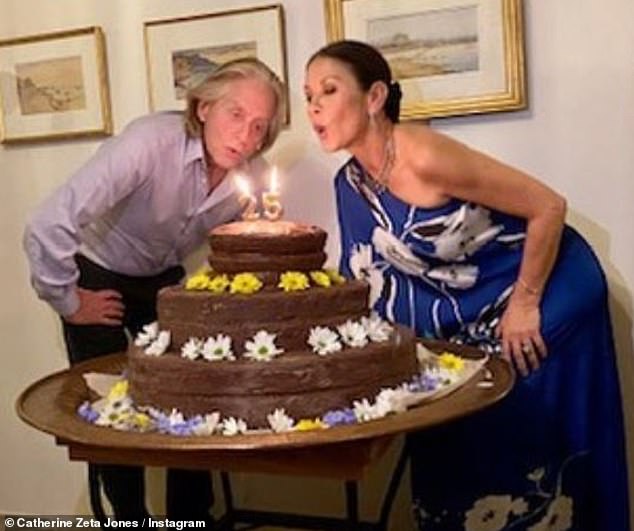 Big day: Their anniversary comes after they celebrated their joint birthdays on September 25. The long-time couple shared a large chocolate cake with the actress declaring it’s ‘so much fun’ to share the milestone together

Their anniversary comes after they celebrated their joint birthdays in September.

The long-time couple shared a large chocolate cake with the actress declaring it’s ‘so much fun’ to share the milestone together.

The tasty dessert featured a prominent 25 which honoured the date of their birthday – September 25 – not the couple’s 25 year age gap.

Together, Catherine and Michael have son Dylan, 22, and daughter Carys, 19. Michael also has son Cameron Douglas, 43, from his first marriage with Diandra Luker. 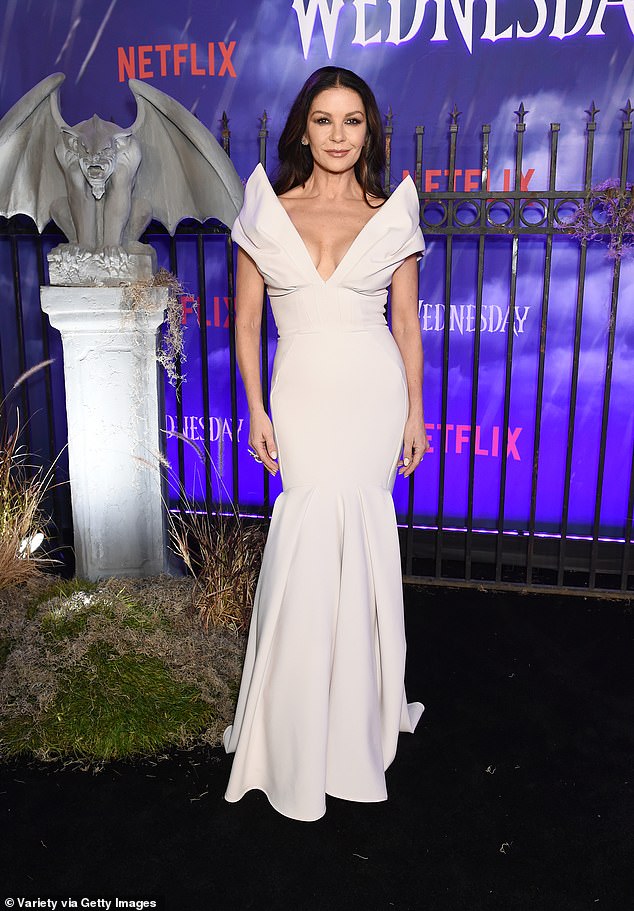 Wonderful in white: Their anniversary comes just after she looked stunning in a plunging white dress at the Netflix premiere of Wednesday