Chelsea Handler, 46, showcases her incredible figure in a cannabis leaf print bikini as she poses in the SNOW during Canada trip – days after her skiing accident

She sustained bad injuries after crashing into a tree while skiing late last month.

But Chelsea Handler went the extra mile to prove that she is still a snow bunny as she posed in a bikini during her girls’ trip to Canada on Thursday.

The 46-year-old comedian showed off her incredible figure in a cannabis lead print two-piece as she cosied up to her gal pals for images shared to her Instagram account. 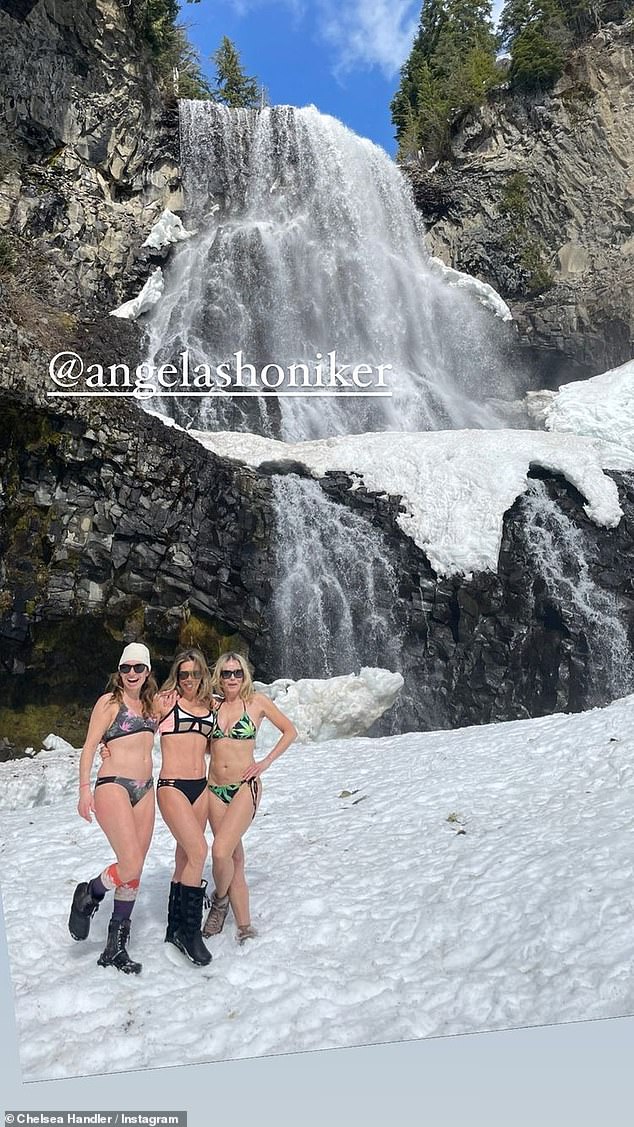 No stopping her: Chelsea Handler proved she’s still a snow bunny as she posed in the snow in a bikini during her girls’ trip to Canada on Thursday, after her skiing accident

She was in good company as she not alone during her latest show of exhibitionism as she was joined by friends including Angela Shoniker.

The trio of women proudly posed with their arms around one another while wearing nothing but two-piece swimwear and snowboots.

Chelsea also shared another saucy snap of her derriere as she stripped off her sweatpants.

Last week, the star revealed that she had  crashed down the snowy mountainside into a tree and suffered an injury. 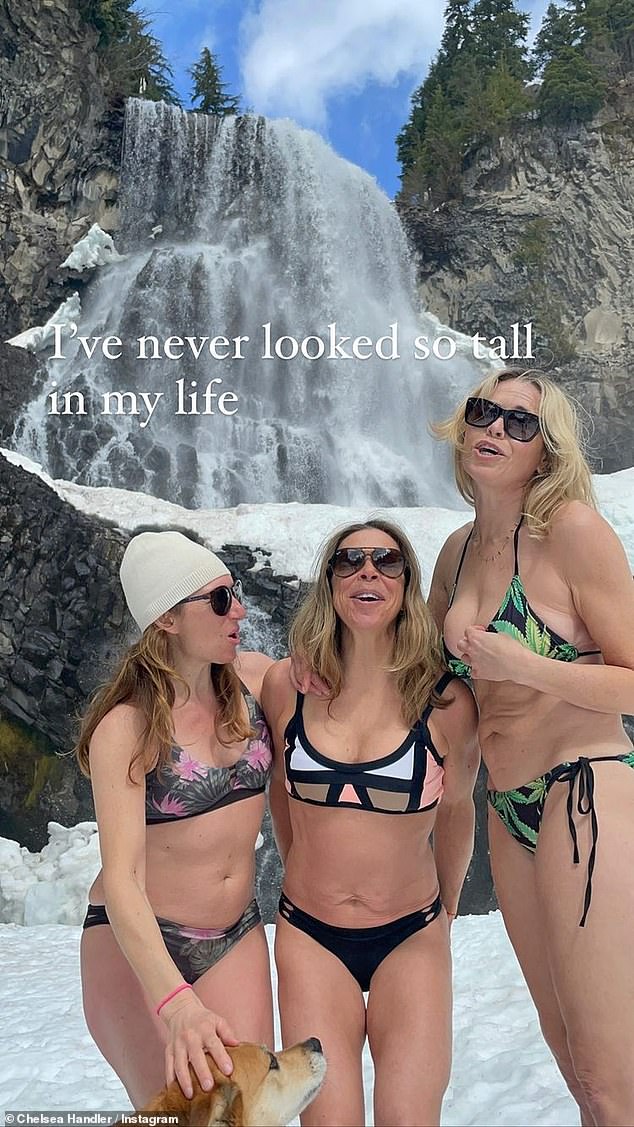 Looking good: The 46-year-old comedian showed off her incredible figure in a cannabis lead print two-piece as she cosied up to her gal pals for images shared to her Instagram account 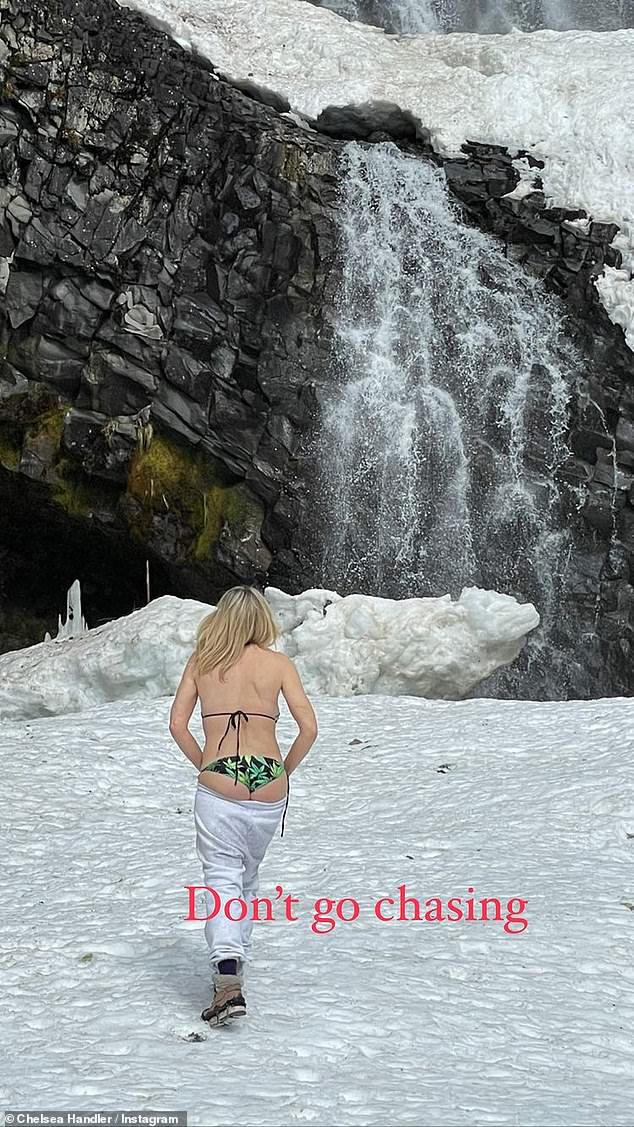 Wow-factor: The presenter also shared another saucy snap as she stripped off her sweatpants

Handler revealed that she had torn her meniscus and broken two toes in the tumble.

‘But I can ski down almost anything now,’ she bragged with a smile at the end of the clip she shared via her Instagram Stories.

Before sharing the news of her injury, she had shared video of herself skiing and boasting about how she’s managed to become quite accomplished on the slopes thanks to an intensive training routine.

She’s been working with a personal ski instructor while on an extended stay in British Columbia, Canada, with some galpals. 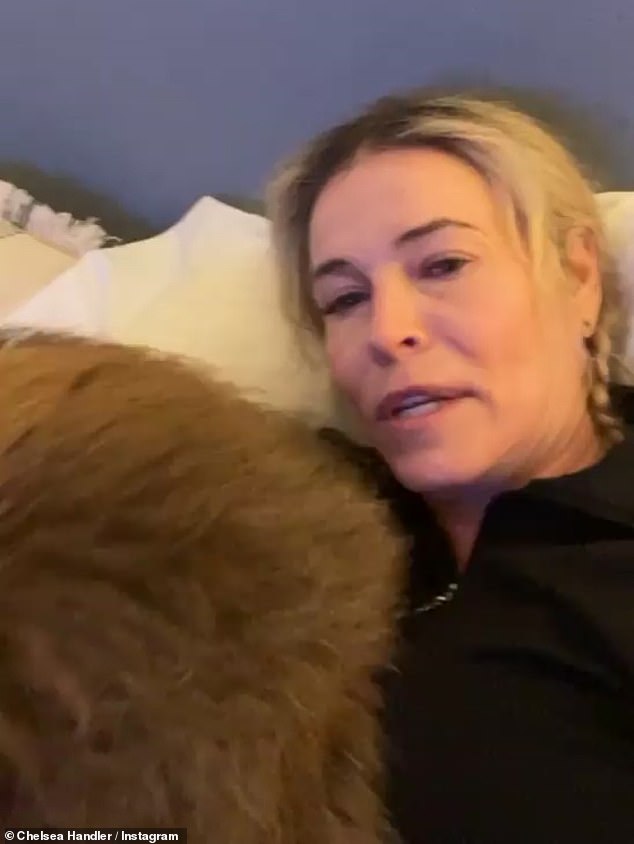 Injured: Last week, the TV star revealed she had crashed down the mountainside into a tree and suffered an injury 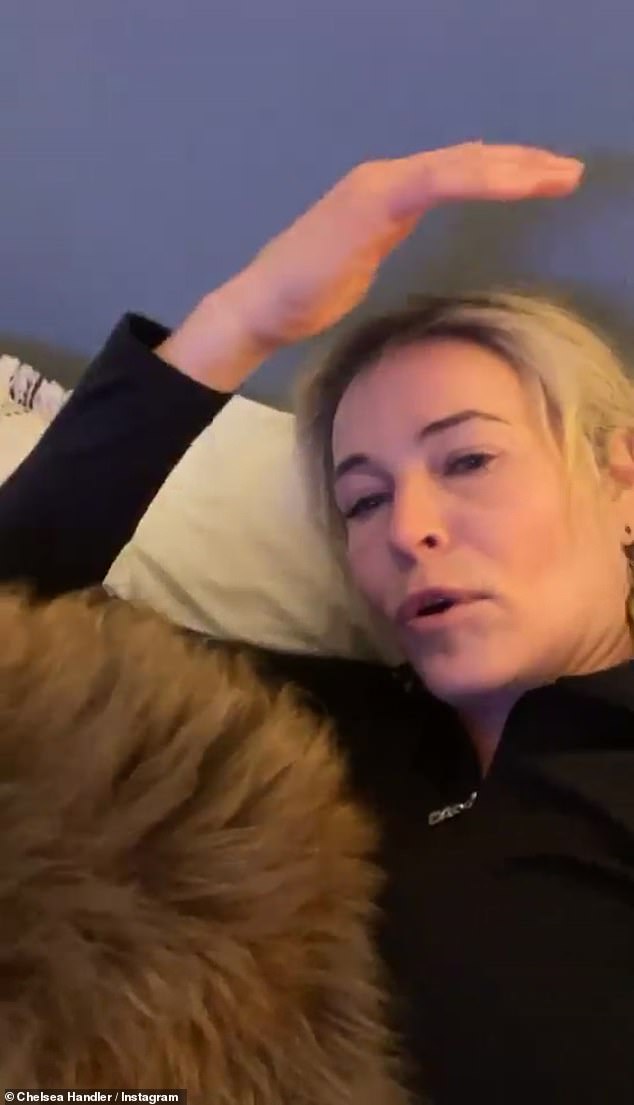 Hurt: Chelsea, who was cuddled up to her very fluffy pup, also described how her arm had actually broken the tree she had crashed into while on the slopes in British Columbia, Canada 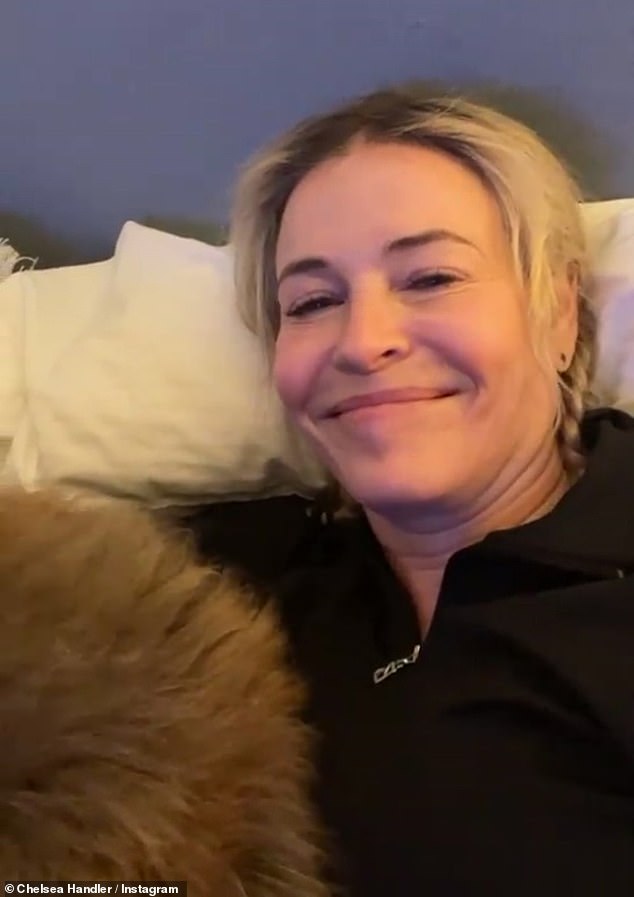 Upside: ‘But I can ski down almost anything now,’ she bragged with a smile at the end of the clip 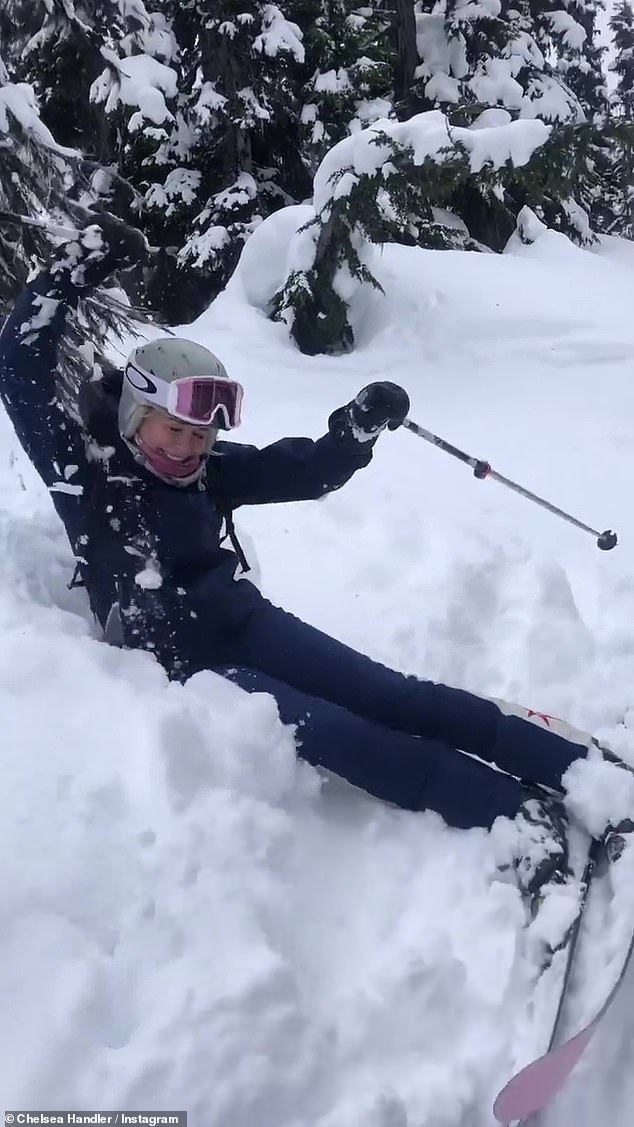 Oops: Before her injury confession, she’d posted video of herself on the slopes including a clip of her tumble into a tree 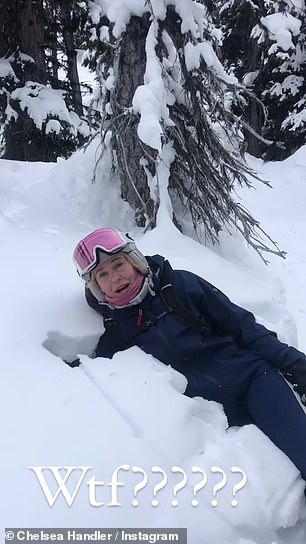 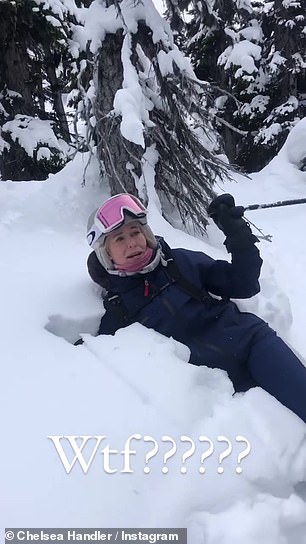 Tumble: The Chelsea Lately host was seen prone in some deep snow and looking a little dazed. It seemed to take her a moment to realize what had happened

Last week, she was showing off her prowess for the camera when she managed to ski right into a tree.

‘Whoopsie doodle,’ she wrote on video of her rescue courtesy of one of her ski buddies.

Last month, the Chelsea Lately host had skied down a snowy mountainside topless on her 46th birthday. 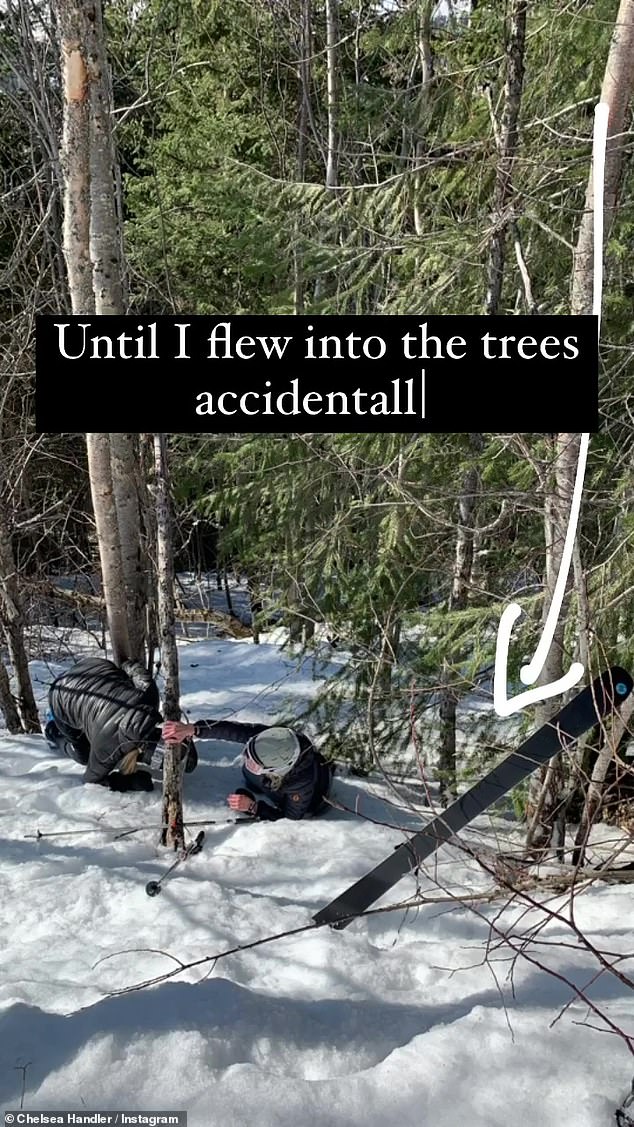 Off piste: Last Thursday, Handler had posted a funny video clip in which she revealed she’d crashed straight into a tree and needed rescuing 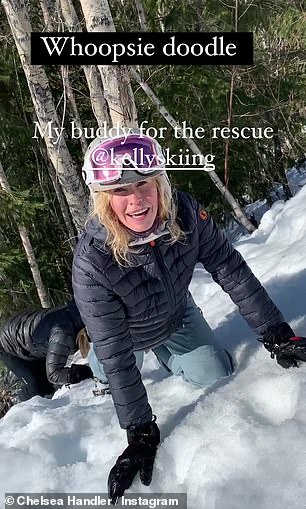 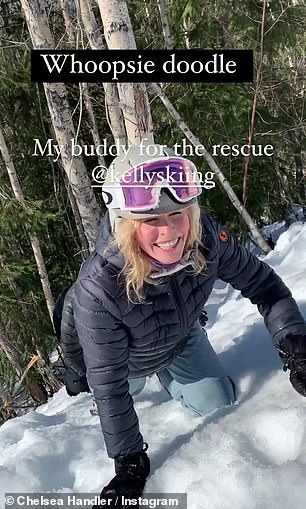 Rescued: She had joked about her mishap and wrote ‘Whoopsie doodle’ on the clip in which she got some help climbing back up a snowy slope 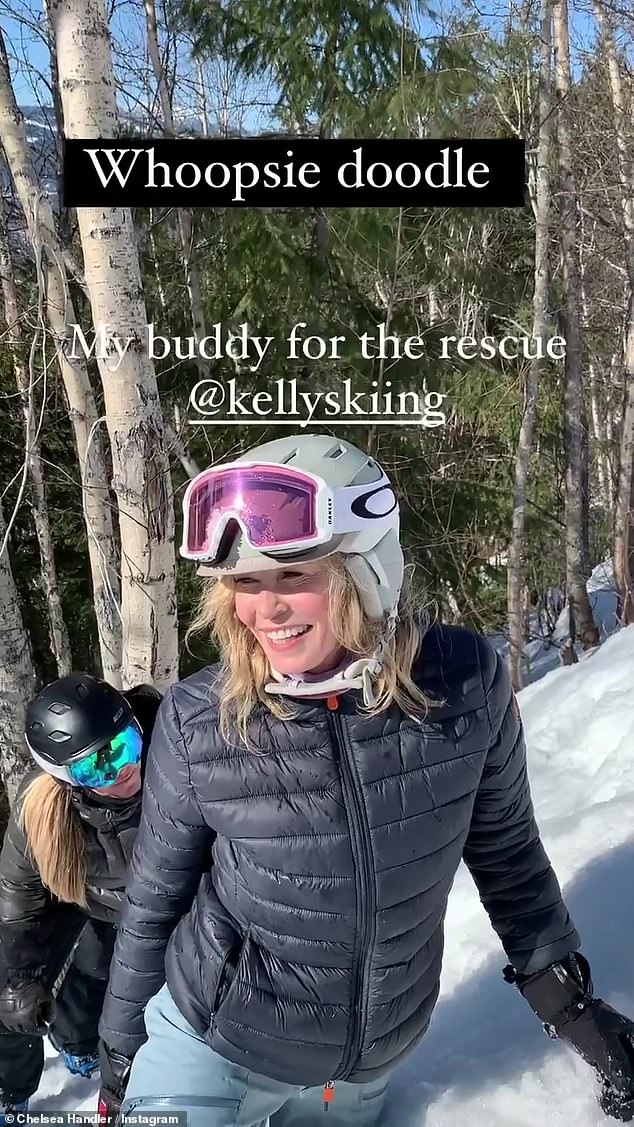 No harm done: Handler was all smiles after last week’s misadventure

On February 25, Chandler had stripped off and skied down Whistler outside Vancouver as she celebrated her special day.

She wore just a pair of blue bikini bottoms and her skis, with a couple of small American flag stickers serving as pasties.

She’s added a safety helmet and goggles and carried a US flag and a Canadian flag as well as a beverage in a glass.

‘It’s important to stay hydrated as well as relaxed, and it’s also important to celebrate your body no matter what age or size,’ Handler wrote in her caption. 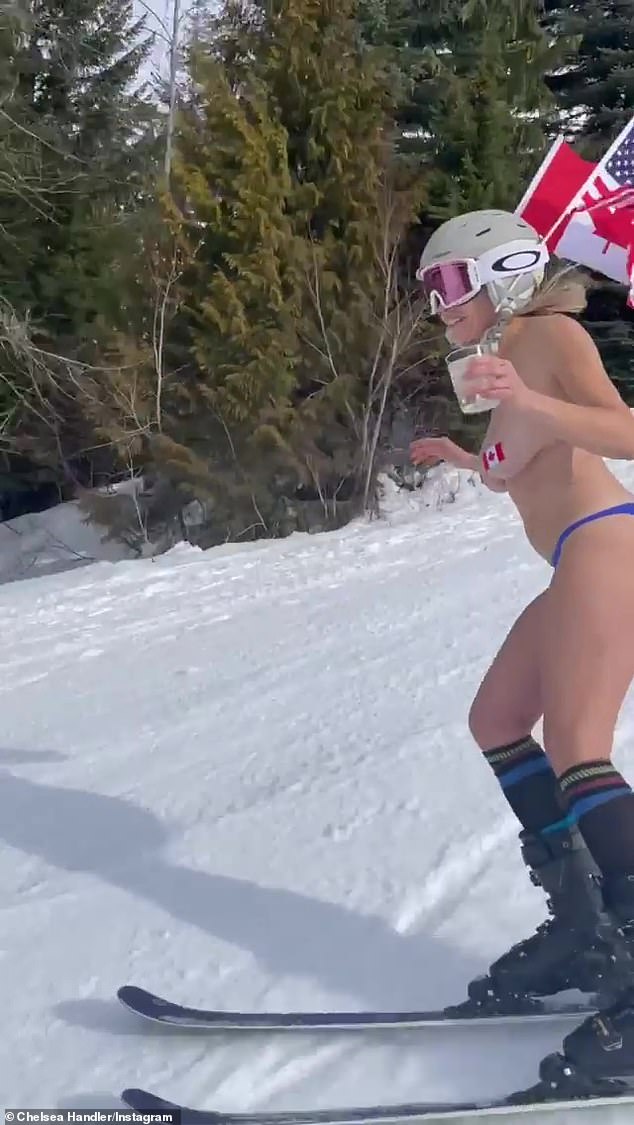 Bold move: On February 25, Handler had stripped off and skied topless down Whistler outside Vancouver as she celebrated her birthday

Cheers! She sipped on a drink during her trip down the mountain wearing just blue bikini bottoms, a safety helmet and goggles and tiny American flag stickers as pasties 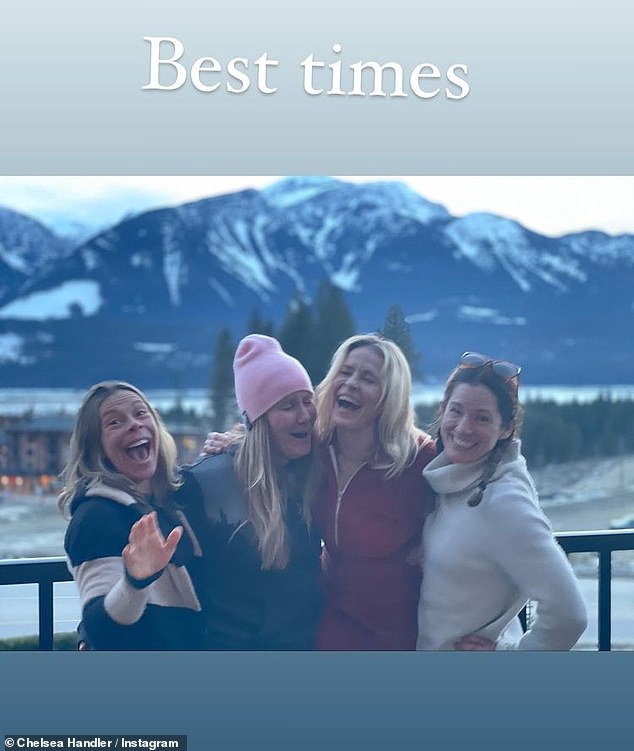 ‘Best times’: Handler has been spending time with three female friends and working with a personal ski instructor during an extended stay north of the border in Canada