She’s waved goodbye to Tier 3 Manchester to enjoy some winter sun in Dubai.

And Chelsee Healey was certainly making the most of her trip as she flaunted her taut midriff in a busty neon pink bikini and matching skirt on Tuesday.

The former Hollyoaks star, 32, looked sensational as she showcased her toned physique in the skimpy swimwear whole posing up a storm on her balcony. 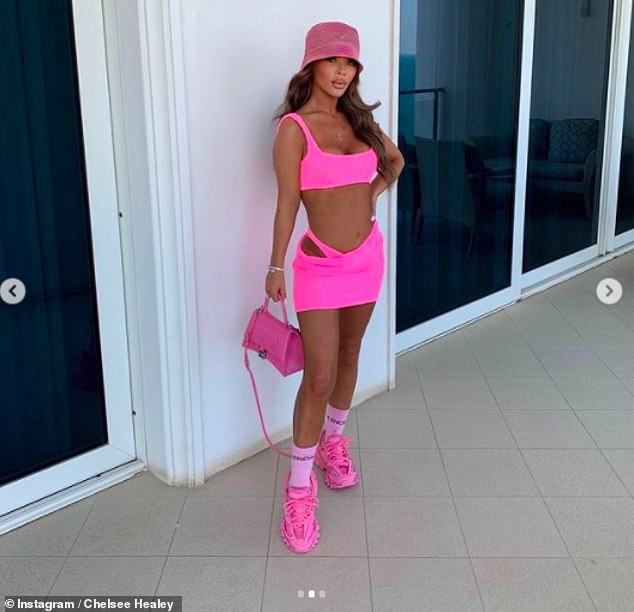 Festive getaway: Chelsee Healey looked sensational as she flaunted her toned physique in a neon pink bikini and skirt while soaking up the sun in Dubai on Tuesday

Not forgetting her accessories, the soap star toted a matching stylish handbag and added a bucket hat to complete her look.

She wore her long brunette locks down, letting her tresses cascade over her shoulders as she pouted for the camera.

The mother-of-one, who lives in Manchester which is under Tier 3 restrictions, confirmed that she was in Dubai on Monday night as she enjoyed dinner with pals and asked if any of her followers knew someone who could ‘lay a frontal wig’. 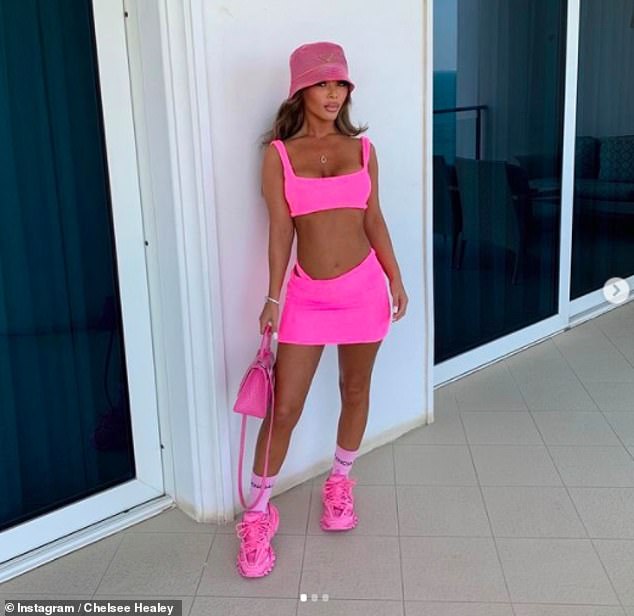 Work it: The former Hollyoaks star, 32, highlighted her toned midriff in the busty top which accentuated her ample assets

In a Tier 3 area, people should avoid travelling outside of your area and also carefully consider whether they must travel abroad, according to the government’s website.

Travel is still permitted for reasons such as work, education, medical attention or if a person has caring responsibilities.

Chelsee had revealed she was jetting off for a festive break on Sunday with a snap of her posing up a storm on a plane.

Since landing in Dubai the beauty has wasted no time in soaking up the sun and showcasing her sizzling figure in a range of stunning bikinis.

However the star has raised some of her followers eyebrows, with one commenting on her posts to question why she’s flown out of the UK amid the pandemic. 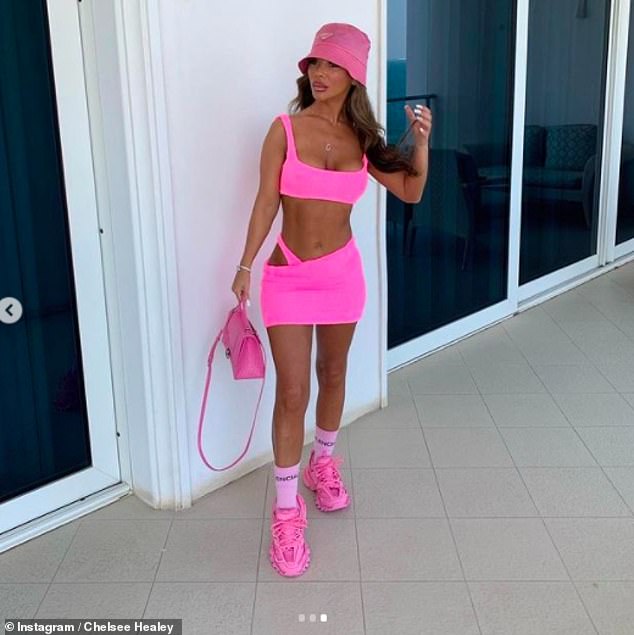 Complete commitment: Chelsee accessorised her swimwear with matching pink accessories including a bucket hat, trainers and a handbag 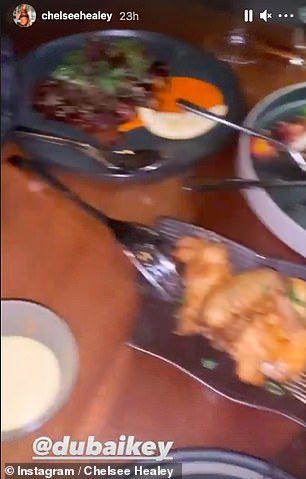 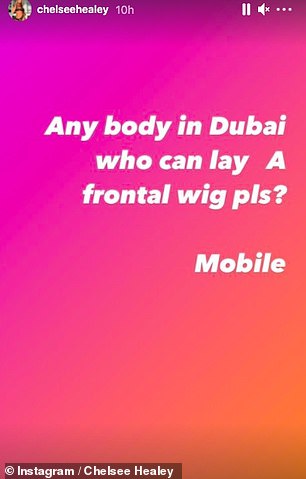 So that’s where she is! The beauty confirmed she was holidaying in Dubai on Monday night as she enjoyed dinner with pals (left) and asked if any of her followers knew someone who could ‘lay a frontal wig’ (right) 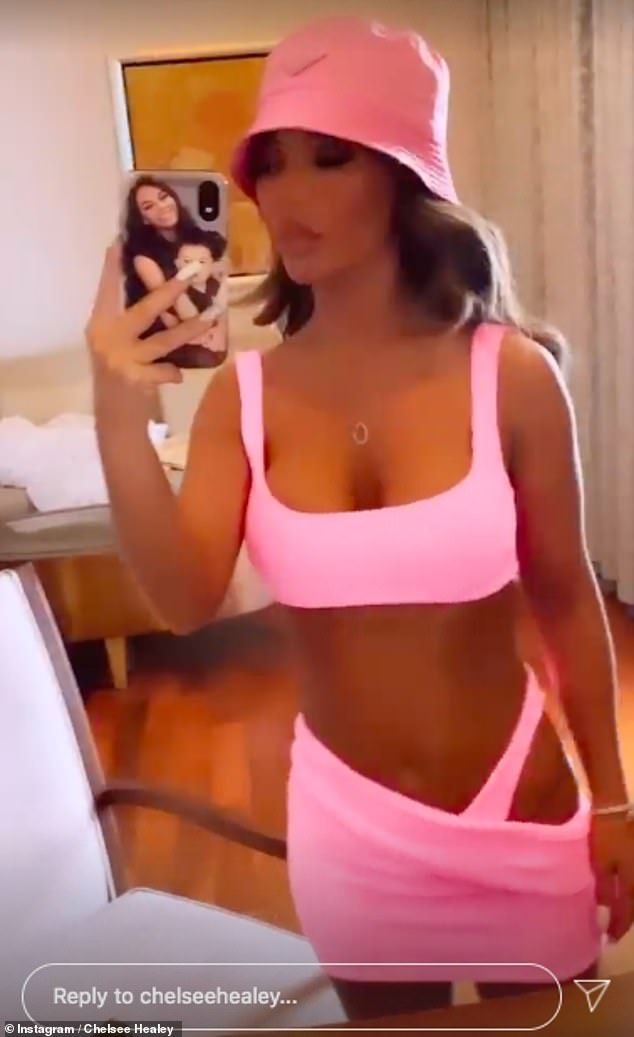 Poser: Chelsee shared another snap of her bright ensemble and personalised phone as she took a mirror selfie inside her hotel room

Replying to the question, Chelsee sarcastically replied she’d booked the trip and taken a ‘run hop jump on the plane from Heathrow’ however she later added another reply saying she had tested ‘negative’ and will be ‘isolating for 2 weeks’ on her return.

It comes after Chelsee was spotted attending a secret lockdown flouting bash in June and later apologised on Instagram, saying she had been ‘irresponsible’.

The TV star has since had a change of heart and told The Sun she has banned new boyfriend Jake McLean- who lives in London – from visiting her home to ensure her daughter Coco, 3, stays safe.

Speaking in October, she said: ‘It’s hard to resist the temptation of breaking the rules but they have to be followed. I made a silly mistake. I am truly sorry. I now realise it was stupid and irresponsible. 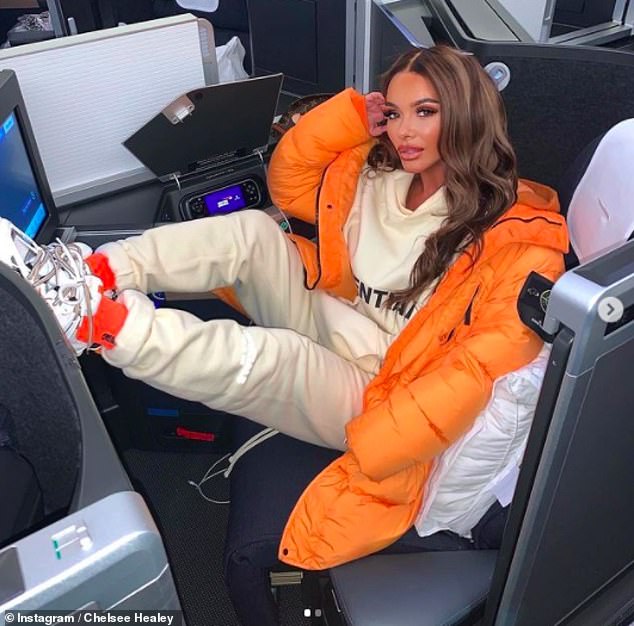 Holiday time: Chelsee had revealed she was jetting off for a festive break on Sunday with a snap of her posing up a storm on a plane 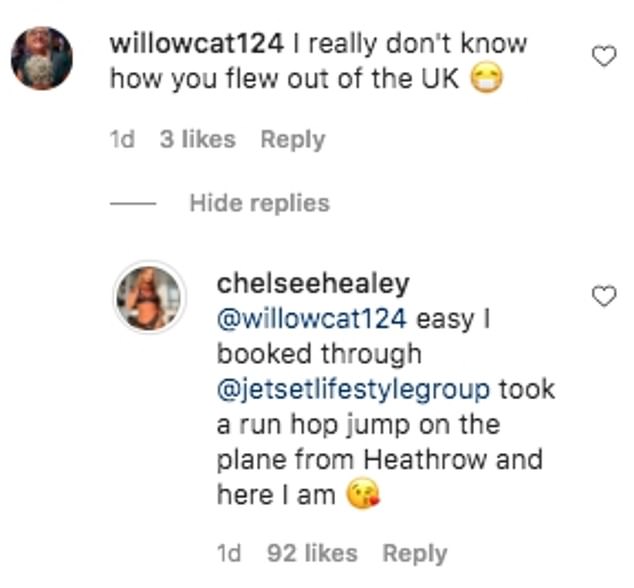 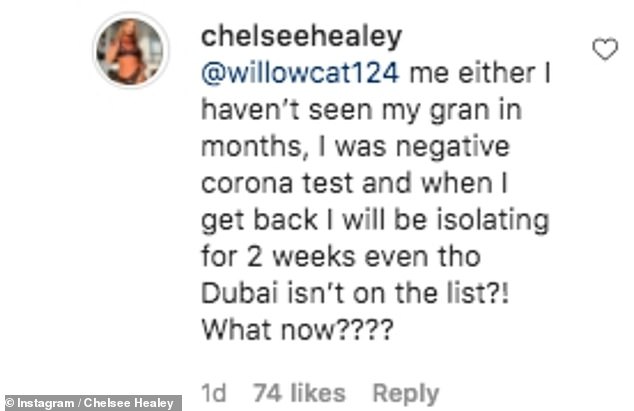 Not impressed: The star raised some of her followers eyebrows, with one commenting on her bikini snaps posts to question why she’s flown out of the UK amid the pandemic

She said: ‘I won’t be locking down with anyone I’m seeing because I’ve got a daughter and she’s my first priority, and he’s in London and that would be too much of a drama.’

Chelsee said she came under a great deal of stress after the lockdown rule break and had to temporarily delete her Instagram due to trolls.

It comes after the actress was reportedly summoned by ‘appalled’ soap bosses after she flouted lockdown regulations in May.

The star sparked backlash after she was spotted outside Lauren Goodger’s jailbird ex Jake’s home which is more than 200 miles from her Manchester abode.

At the time, Chelsee was said to have been told off about her behaviour by soap bosses and they were ‘looking into what consequences she is likely to face’. 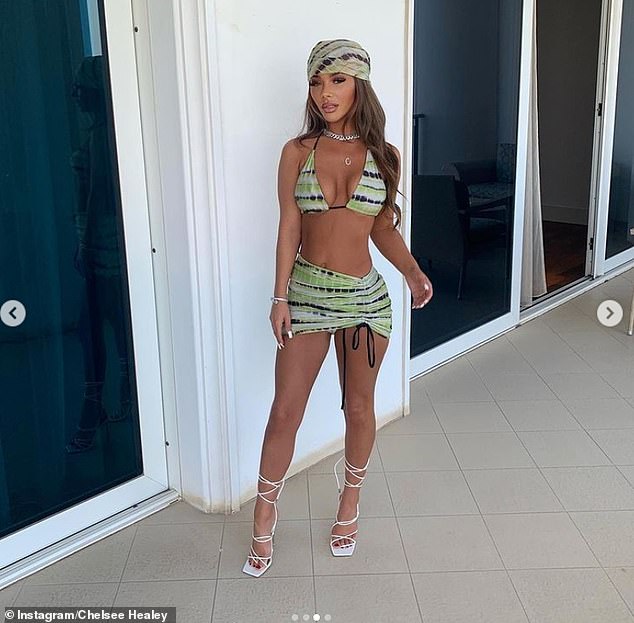 Toned: Chelsee set pulses racing as she donned a skimpy bikini for a sizzling snap during her holiday on Monday

Travelling to Dubai from the UK: what are the rules?