I got you, babe! Cher randomly offers to take loved-up snap of couple who thought she was ‘maybe just a crazy woman’… until the legend tweeted photo to her 3.9M followers

A Houston couple were left wishing they could turn back time on Tuesday, when legendary singer Cher randomly approached them and offered to take their picture – but didn’t realise who she was.

The stunned couple only found out who had taken their photo, when the Gypsys, Tramps & Thieves legend posted it to her 3.9million followers on Twitter.

Cher, 75, explained the situation, tweeting: ‘When we were coming out of movie I saw beautiful couple. He was taking her pic…. She had flowers I said… can I take your pic.’ 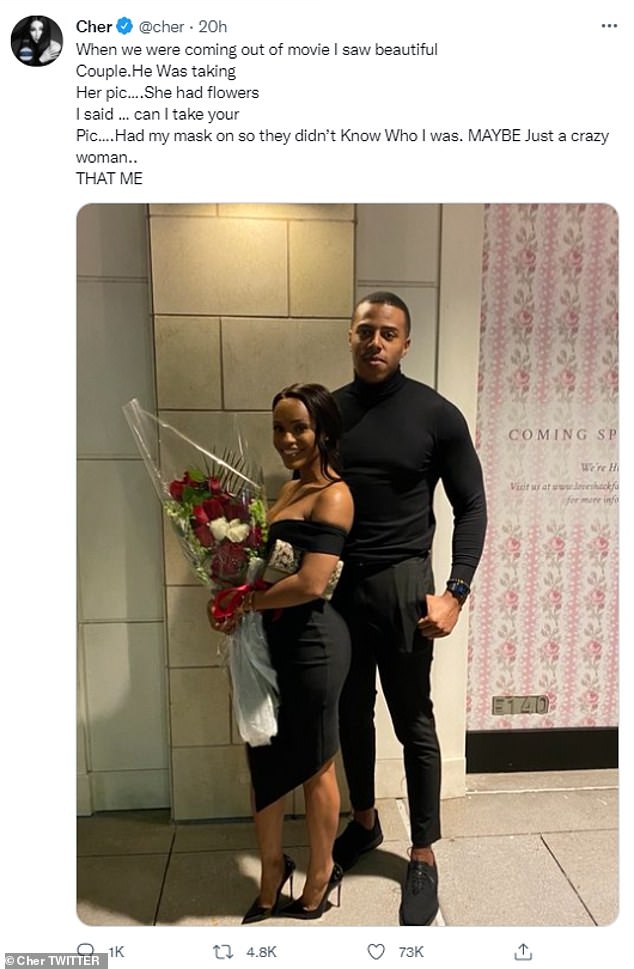 I Got You, Babe: Cher offers to take picture for loved-up couple who thought she was ‘maybe just a crazy woman’ until she tweeted snap to her 3.9M followers

The icon joked that the loved-up pair had no idea who she was because she had her mask on, saying: ‘Had my mask on so they didn’t know who I was. MAYBE Just a crazy woman.. THAT ME.’

In another twist to the story, it was later revealed the couple – beauty blogger Syndie and realtor Tehran Stokes – had not officially gone public with their relationship to friends.

‘OMG! It really was @cher wow took my photo last night! Well, so much for keeping my boo private, lol,’ Syndie wrote on her Instagram Stories. 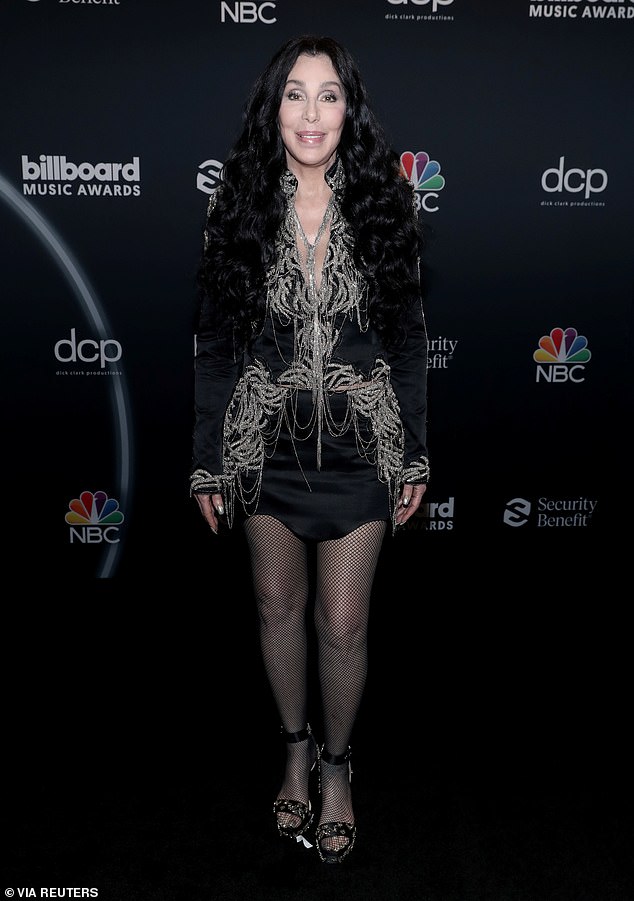 Do you believe that Cher took your photo? The living legend explained how the couple didn’t recognize her with a mask on (Pictured above in October last year)

Replying to Cher’s tweet, Syndie also revealed it was her birthday when the Mamma Mia star took the picture.

Syndie added to Cher’s fans asking questions: ‘She had a mask on, and when she asked to take our photo, she was far away from us.’

‘It was dark, and she was fully covered, but we kept thinking this wasn’t an average person.’ 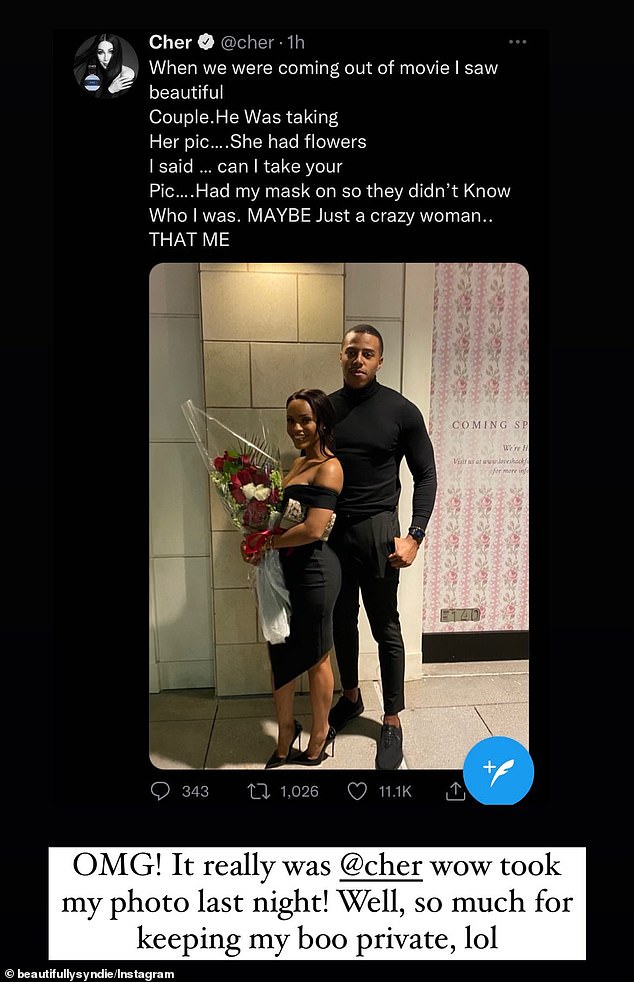 If they could turn back time: Beauty blogger Sydnie admitted she didn’t realise it was really Cher who took their photo, and admitted she hadn’t gone public with her romance 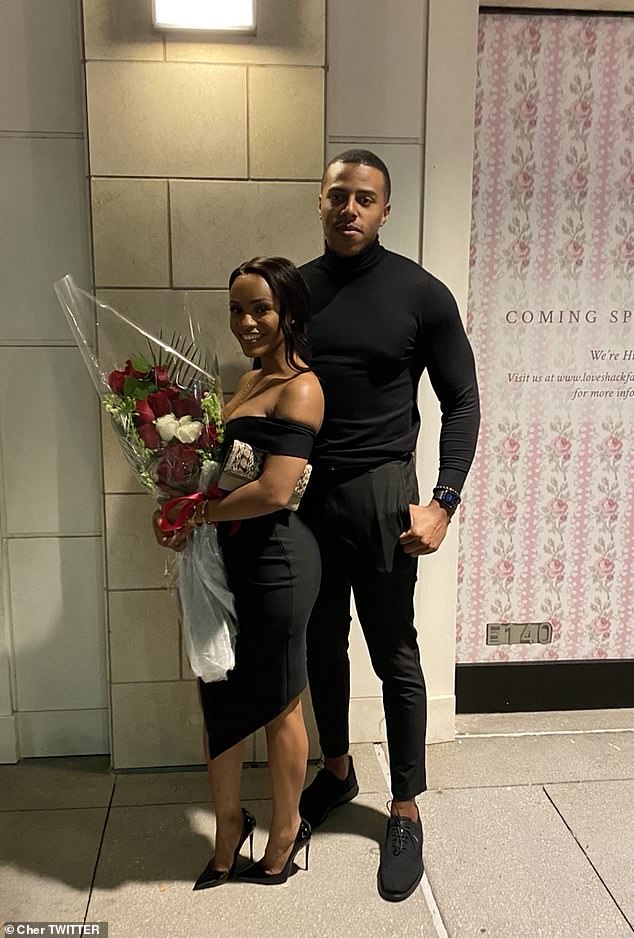 Great camera work: Cher certainly proved herself to be a good snapper after getting a good shot of the pair

Syndie’s boyfriend Tehran was also stunned by the random encounter, tweeting:  ‘Wow! So we really did meet CHER. This night will certainly be remembered forever.’

After explaining that the couple had yet to go public with friends and family, Syndie then shared an adorable portrait of the two, saying the cat was now out of the bag thanks to Cher of all people.

‘Talk about a reveal! Well, here’s the man, the myth, the legend and the mastermind behind the birthday I’ll never forget,’ Syndie said. 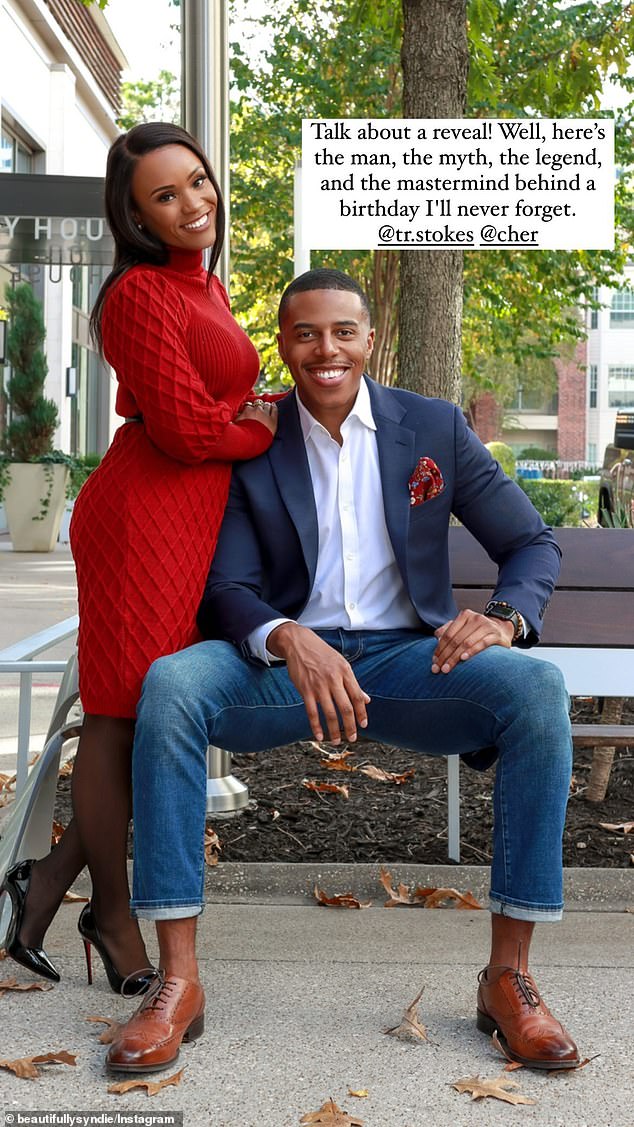 Love and understanding: Luckily it seems the couple were fine with Cher going public with their romance