Geordie Shore star Chloe Ferry appears to be having a whale of a time with her co-star Bethan Kershaw while on holiday in Dubai.

The 24-year-old sizzled in a neon orange bikini which barely covered her assets as she enjoyed the sunshine while snapping selfies on her phone.

Chloe showed off a variety of inkings in her two-piece which had a thong design at the back. 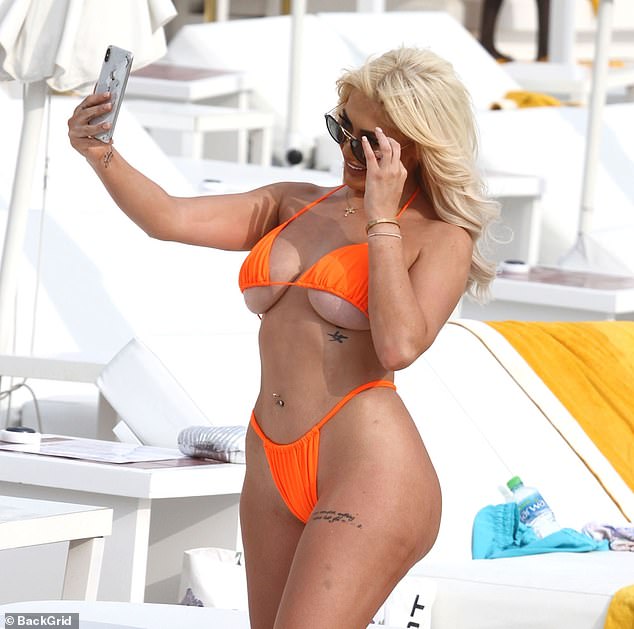 Bright thing: Chloe Ferry struggled to contain her assets in a skimpy bright orange bikini as she larked around with Geordie Shore co-star Bethan Kershaw in Dubai on Thursday 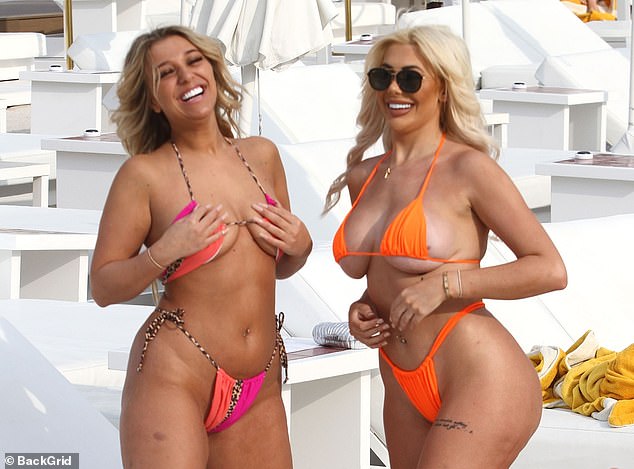 Golden girls:  The girls were clearly having a giggle as they topped up their tans in the sunshine

Bethan looked equally lovely wearing a pink and orange two-piece and the two were seen larking around on their loungers.

At one point, Bethan, 24 cupped her assets while laughing, making sure she didn’t accidentally reveal too much.

Bethan’s top was skimpy in design and showed off a serious amount of skin as she reclined on her lounger.

Skin-credible: Chloe’s bikini was very skimpy in design and showed off a serious amount of flesh 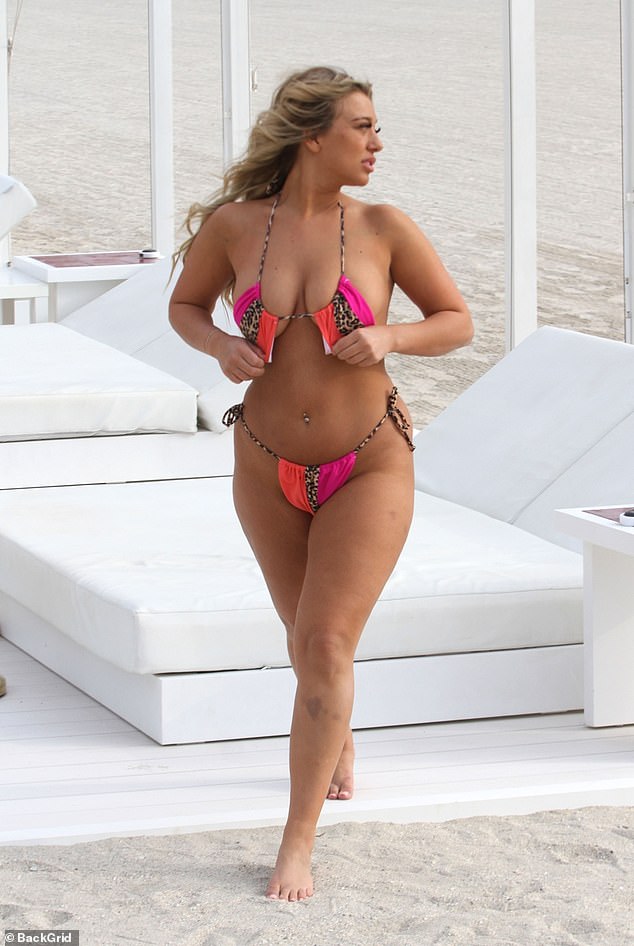 Wow thing: Bethan’s bikini was equally skimpy in design and showed off her curves perfectly 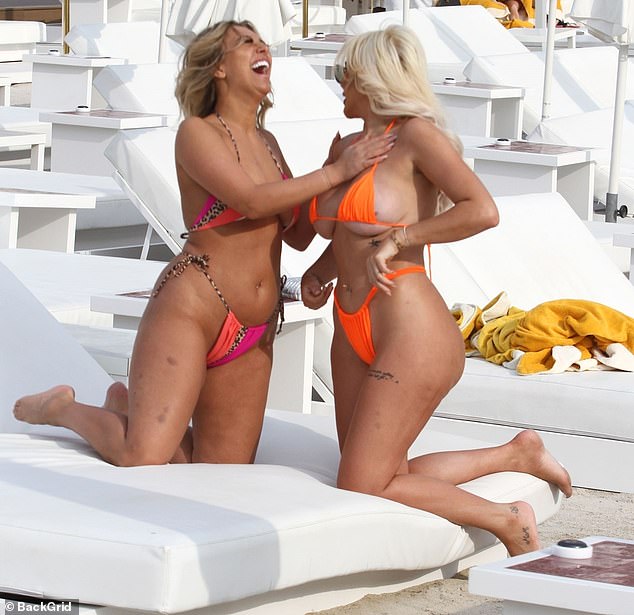 Sun safe: The girls seemed to get the giggles as they stuck on a bit of factor 50

Well they do have more fun: Chloe had lightened her locks even blonder for her trip abroad

On Monday, Chloe and her reality star pals enjoyed a fun-filled champagne party together as they filmed each other dancing around the pool.

During the holiday she also spent the day on a luxury yacht with Bethan and their friend Lateysha Grace, 27, before hitting the club for DJ Chris Wright.

The group jetted out to the party destination in business class, as Chloe shared a picture of their luxury flight on her Instagram Story. 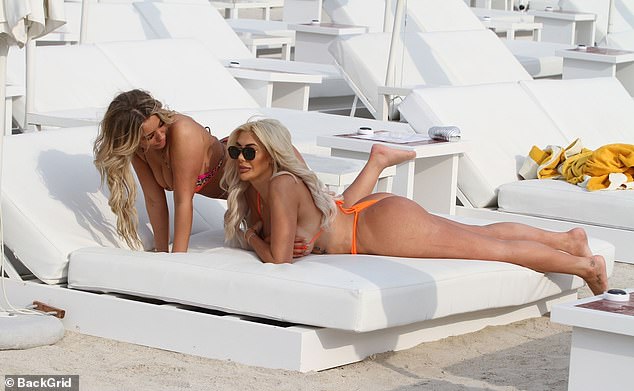 Basking: When they weren’t walking around, they enjoyed a little gossip on a white sun lounger

Shady: She hid her eyes behind a pair of designer shades as she walked across the sand 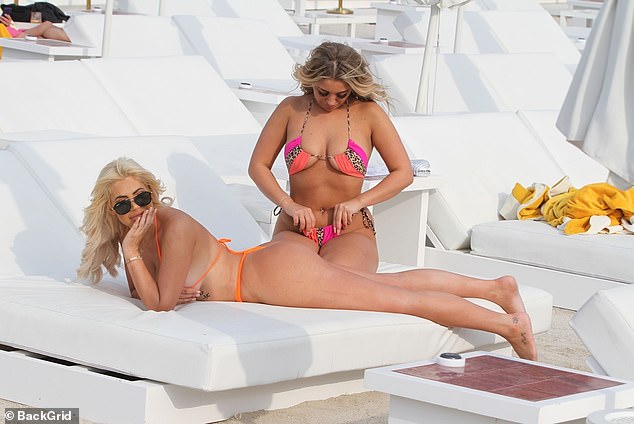 Checking all is well: At one point, Bethan adjusted her briefs

Wow thing: Chloe had a smattering of jewellery on the day, adding some sparkle to her ensemble

During the idyllic trip disaster struck when Chloe stepped on glass and cut her foot open, leaving it gushing with blood onto the floor which was littered with £20 notes.

Chloe’s on/off boyfriend Sam Gowland, 24, appeared notably absent from the trip after they reunited and spent time together in Thailand at the beginning of the year.

According to the Sun, Chloe was grinding up against her pal Luke in a club, however there is no insinuation they are anything more than friends.

Chloe and Sam were recently spotted chatting to each other while watching the sunset from their swimming pool at Naoura Villas in Thailand.

The couple have had their fair share of break ups since their romance first went public back in 2017.

Where is he? There was no sign of Chloe’s on-off lover Sam Gowland on the day 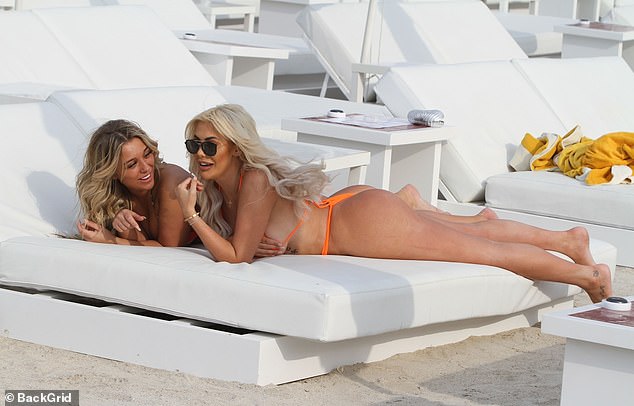 Something to talk about: The girls cosied up to one another for a catch up 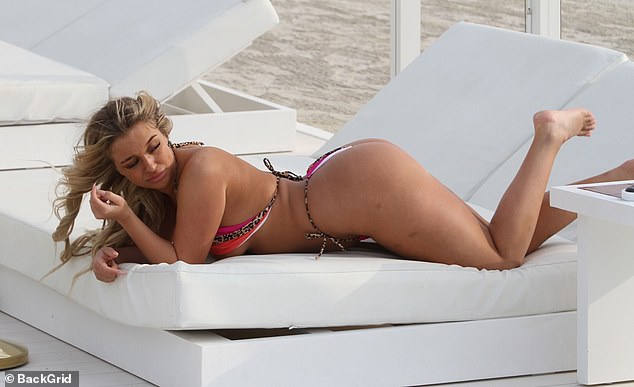 Tan time: Bethan made sure to turn over once in a while to get an all-over tan

Model behaviour: Chloe looked picture perfect as she went on a daytime stroll in the heat 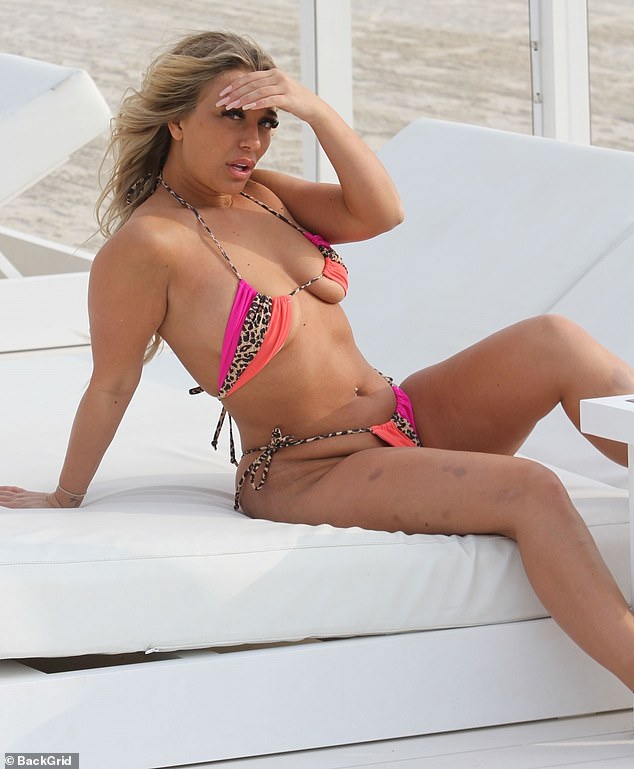 Steady on: She had to shield her eyes from the  sun as she was without sunglasses