The Netflix star, 40, unveiled her new relationship in a series of cuddled-up snaps taken from her current getaway to Capri, Italy posted on Wednesday.

Chrishell looked as happy as can be packing on the PDA with her new beau, 44, as the new lovebirds explored the sights on board a boat. 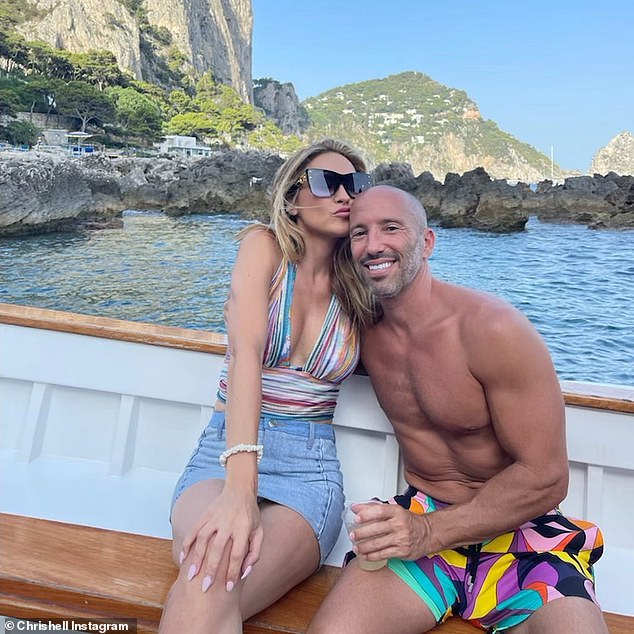 While the romance between the pair may definitely come as a surprise to many fans, their close friends were delighted the relationship was finally out in the public.

Selling Sunset stars took to the comments section to congratulate the pair on their new romance.

‘So happy for you guys! Finally people will stop with Jason and Mary hopefully,’ costar Romain Bonnet joked, referencing his wife Mary Fitzgerald’s past romance with Jason. 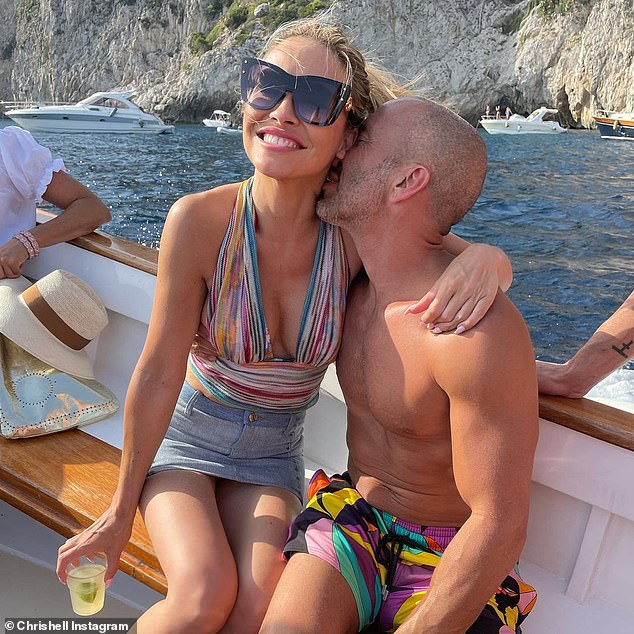 All aboard the love boat! While the romance between the pair may definitely come as a surprise to many fans, their close friends were delighted the relationship was finally out in the public 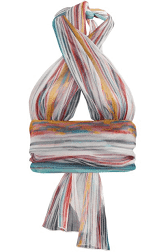 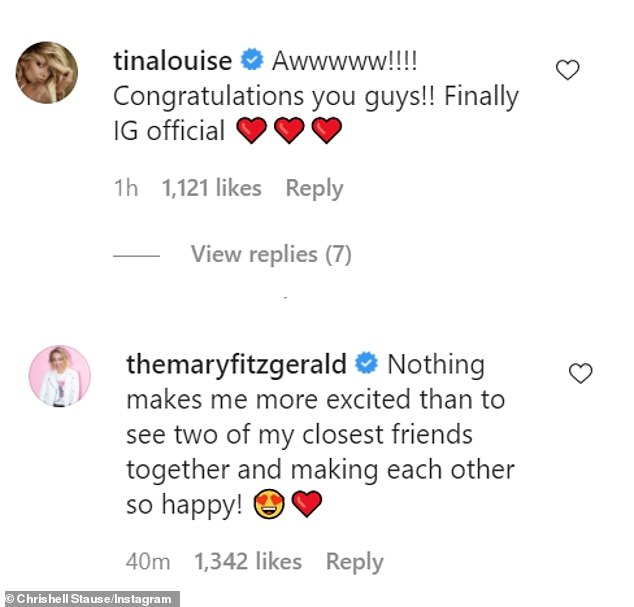 Love is in the air! Selling Sunset’s new agent Emma Hernan also chimed in on the romance

Brett’s girlfriend Tina Louise was over the moon learning the relationship had finally made it to social media.

Mary Fitzgerald wrote: ‘Nothing makes me more excited than to see two of my closest friends together and making each other so happy!’

Jason left a red heart emoji in the comments section. 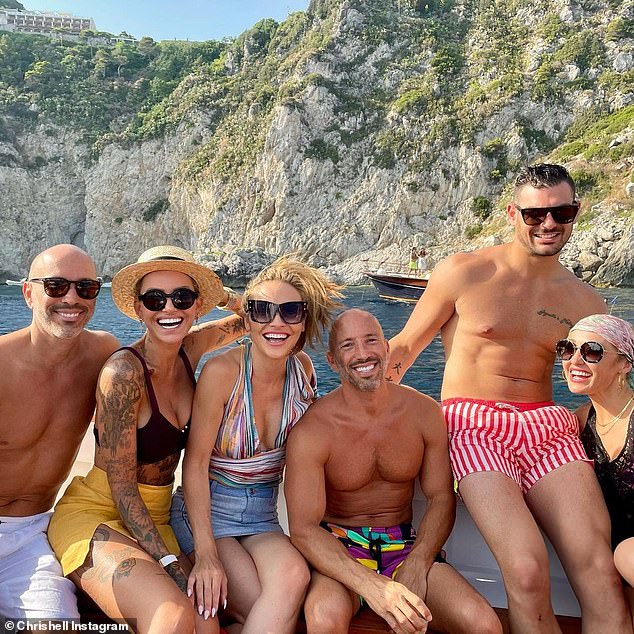 Making a splash! The photos were just two of many Chrishell posted that day, chronicling her fun-filled adventures in Italy with fellow Selling Sunset stars Mary, Romain, Brett and his girlfriend Tina 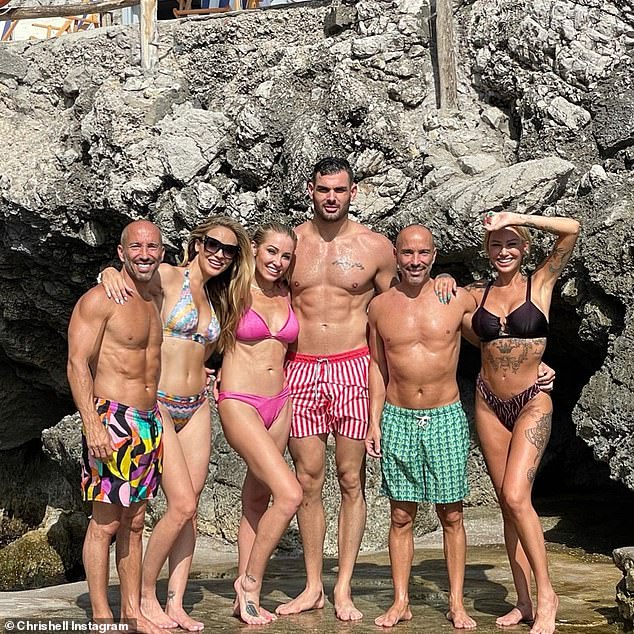 Fun in the sun! The stars smiled wide as they posed in their swimsuits

‘The JLo effect,’ Chrishell captioned the slideshow, along with a shrugging emoji.

It’s been nearly two years since Chrishell split from Justin Hartley, who filed for divorce from her in November 2019 following two years of marriage. Chrishell would go on to file for dissolution of the marriage the following month.

The divorce was finalized earlier this year, and the immediate fallout was captured on Selling Sunset.

On the show, the Days Of Our Lives alum slammed Justin for telling her about his intent to file for divorce over text message just 45 minutes before the news was made public. 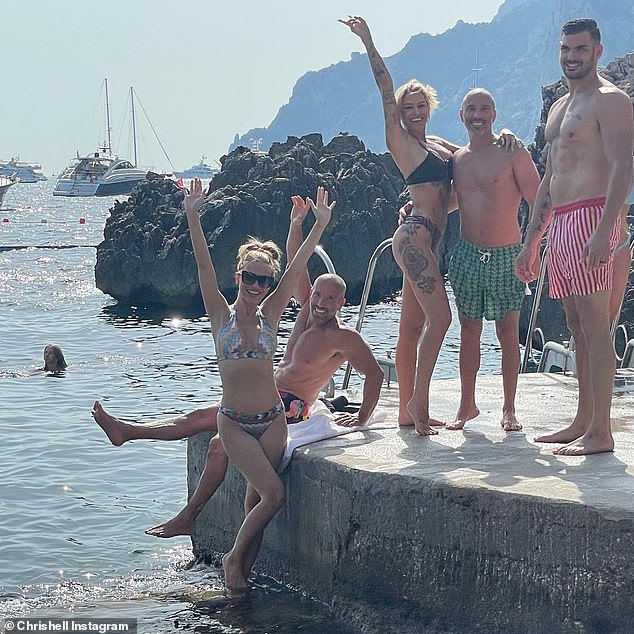 Life is good! The stars couldn’t have looked any happier frolicking by the surf 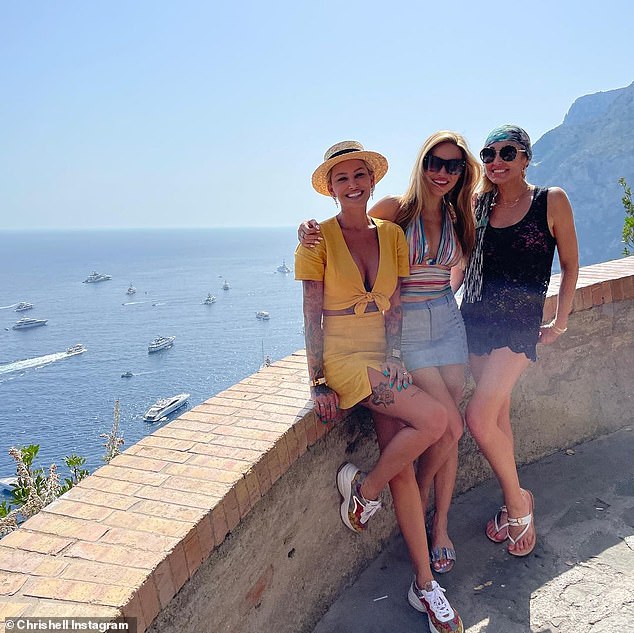 She said: ‘I found out because he text[ed] me that we were filed. Forty-five minutes later, the world knew.’

And Chrishell also hit out at the actor for making an ‘impulsive’ decision about the future of their relationship.

She fumed: ‘Because of the crazy way in which this went down, people want answers, and I f****** want answers. I know people are saying we were only married two years, but it’s like, we were together for six years. … In a fight, that’s his go-to, you know? Like, ‘I’m out, I’m out.’ I hate that kind of impulsive stuff, but I always just thought, you know, that’s just an issue that we work through it. 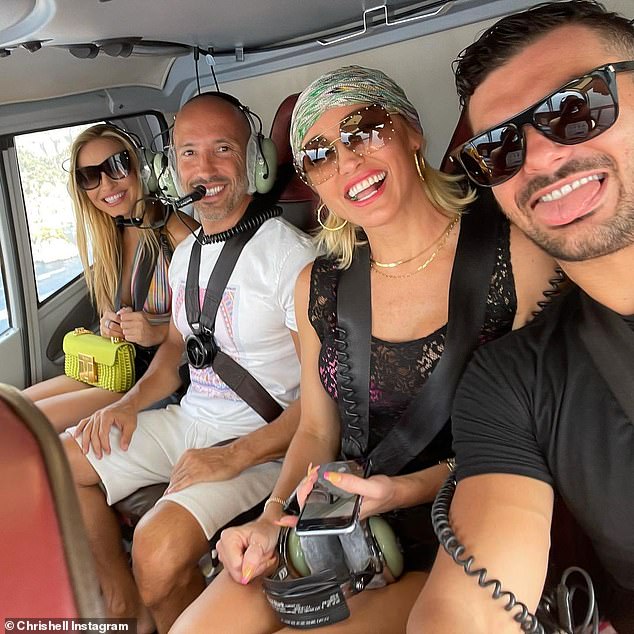 So fly! The group explored the sights by helicopter

‘If that’s really what you wanted, there are better ways to go about [it]. I talked to him right after because I thought that must be a joke, but that was kind of the end of the communication. What am I supposed to say? What do you say after that? It’s like, now I have to find a place to live. Now I have to scramble and figure this out, you know?’

The duo have both moved on, with Chrishell briefly dating Dancing With The Stars pro Keo Motsepe and Justin marrying actress Sofia Pernas.

Justin and Sofia made their red carpet debut at the MTV Movie & TV Awards on May 16, about a year after they were first spotted together. 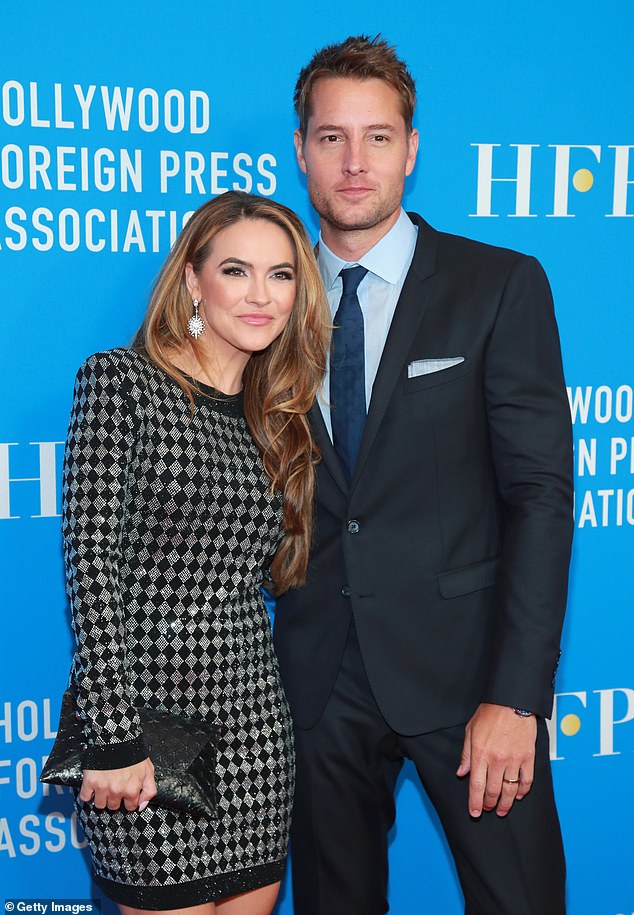 The way they were: The immediate fallout from Chrishell’s divorce from Justin Hartley was captured on Selling Sunset

They previously worked together on The Young and the Restless back in 2015 and started dating last year following Hartley’s split from Stause.

Chrishell is not the only Selling Sunset star Jason has romanced.

The real estate agent was also in a relationship with his coworker Mary Fitzgerald, but the duo remained friends after their split and now work together at Jason’s company, The Oppenheim Group.

Their working relationship came under scrutiny from their peers, whom accused Jason of favoring Mary over his other employees. 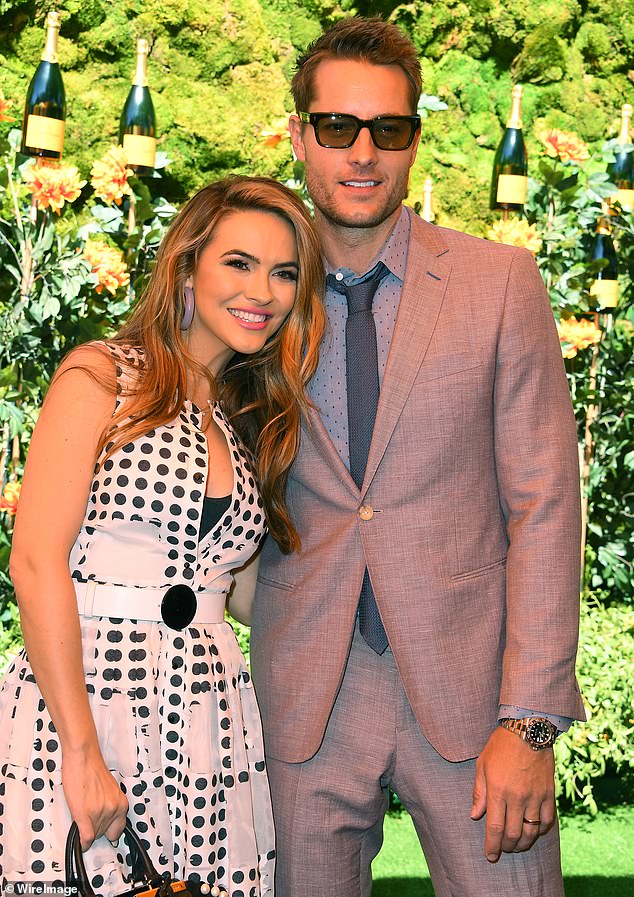 Former flames: The duo have both moved on, with Chrishell briefly dating Dancing With The Stars pro Keo Motsepe and Justin marrying actress Sofia Perna

‘I don’t give her special treatment,’ Jason told Good Housekeeping. ‘When it comes to business… it’s strictly a response to their production, the amount of money that they bring into the brokerage, their level of experience and expertise, and my level of trust in them.’

Mary had a bone to pick with the speculation as well, hitting back at allegations their prior romance was the reason for her professional success.

‘Jason and I have been friends for probably 15 years,’ Mary explained on the show. ‘We dated for maybe a year of that. These girls are trying to take away all of my success and my hard work, saying, “Oh it’s because they dated”. 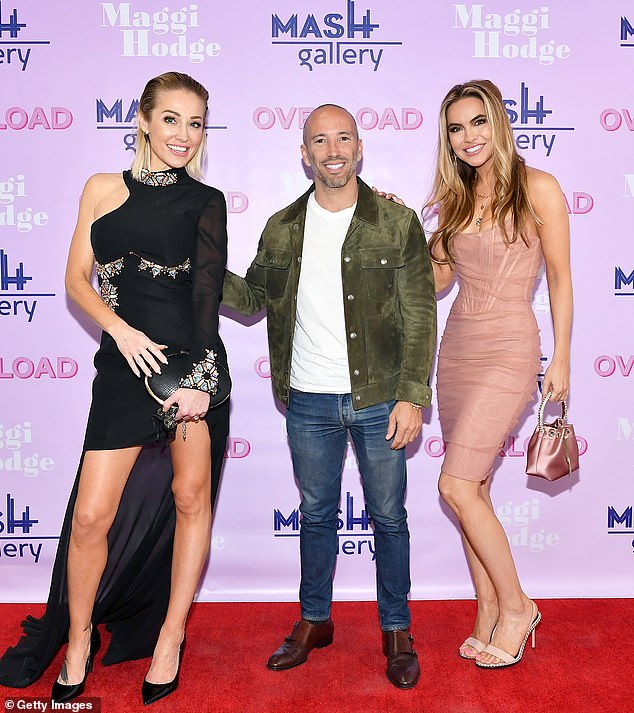 Friendly exes: Jason was previously in a relationship with his friend and coworker, Mary Fitzgerald

‘No, I bust my a** and I work for it. I think it’s extremely rude and disrespectful to try to take my accomplishments and all of my hard work away from me because I’m a successful woman and they just want to throw it back on, “Oh she’s probably sleeping with him.” No!’

Mary and her husband Romain have currently joined the new couple on their current getaway to Italy, as have Jason’s twin brother Brett and his girlfriend Tina.

The photos were just two of many Chrishell posted that day, chronicling her fun-filled adventures in Italy with her friends.

On Wednesday, Chrishell posted a snap of herself grabbing lunch with her friends – including Jason – in Positano. 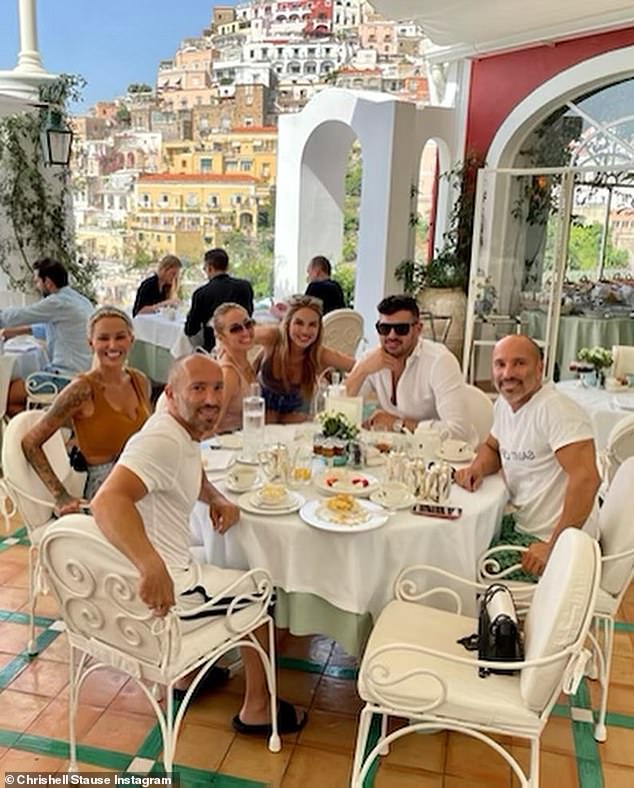 Bellas: The star was also pictured with some of her Selling Sunset costars – Jason and Brett Oppenheim – during an outdoor lunch