Christine McGuinness revealed she only ever sleeps nude as she posed naked on her bed for an Instagram snap on Friday as she discussed her battle with insomnia.

The Real Housewives of Cheshire star, 32, revealed she only gets between two to five hours sleep a night and takes CBD remedies to help her drift off.

Christine wrote: ‘Let’s talk insomnia… I’ve struggled with sleep since my teenage years, it’s totally normal for me to have between two-five hours sleep. 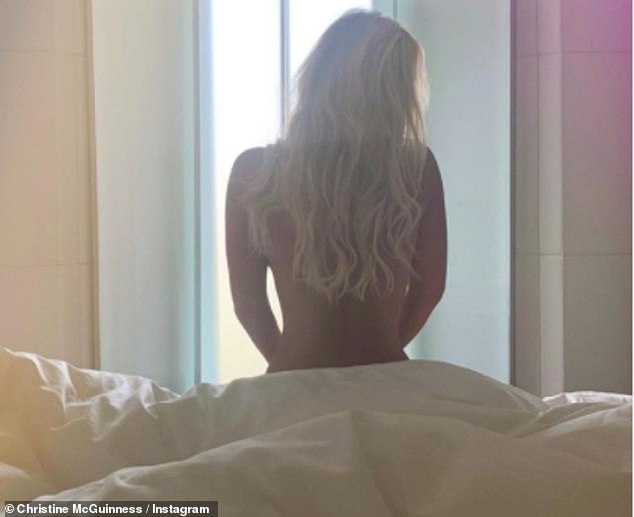 Candid: Christine McGuinness went nude for an Instagram snap on Friday to discuss her battle with insomnia, revealing she only sleeps around two to five hours per night 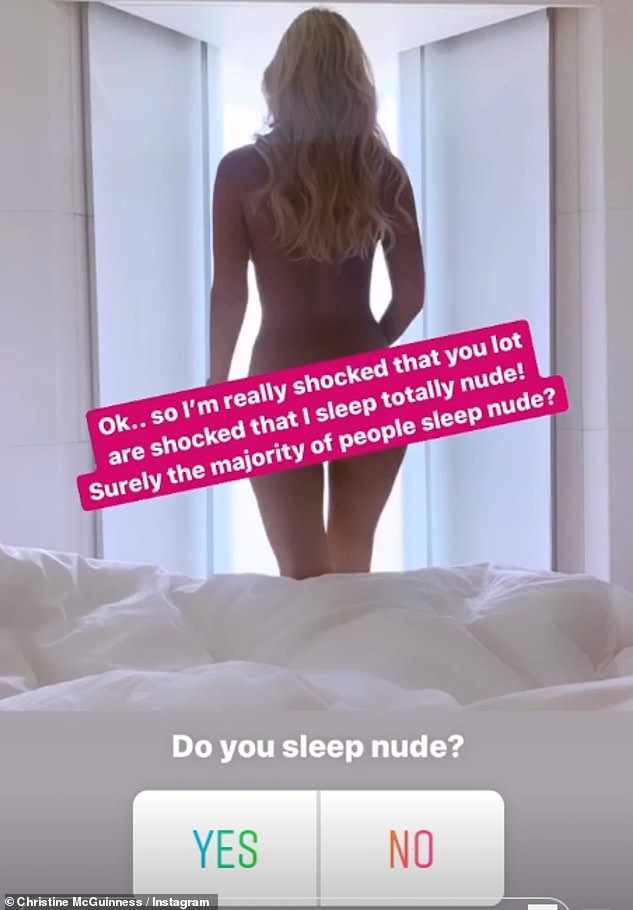 In her birthday suit: Christine also confirmed that she always sleeps nude, and revealed that she hasn’t drunk alcohol for 13 years

‘I’m not trying to “fix” this as it’s just a part of my life now and there are times that I love being awake through the night… it’s the only time I get to myself but I am looking for tips on how to switch off for those nights that I really need sleep!

‘For me, there are so many reasons that I don’t sleep, reasons that I can’t do anything about so that’s why I’m not trying to fix it I just want to help reduce it if that makes sense! I would like to relax if/when I can.’

Christine is married to comedian Paddy McGuinness, 47, and is parents to twins Penelope and Leo, seven, and Felicity, four – her children have been diagnosed with autism.

She revealed that she hasn’t had much luck with sleep medication as she struggles to wake up and tend to her children when using them. 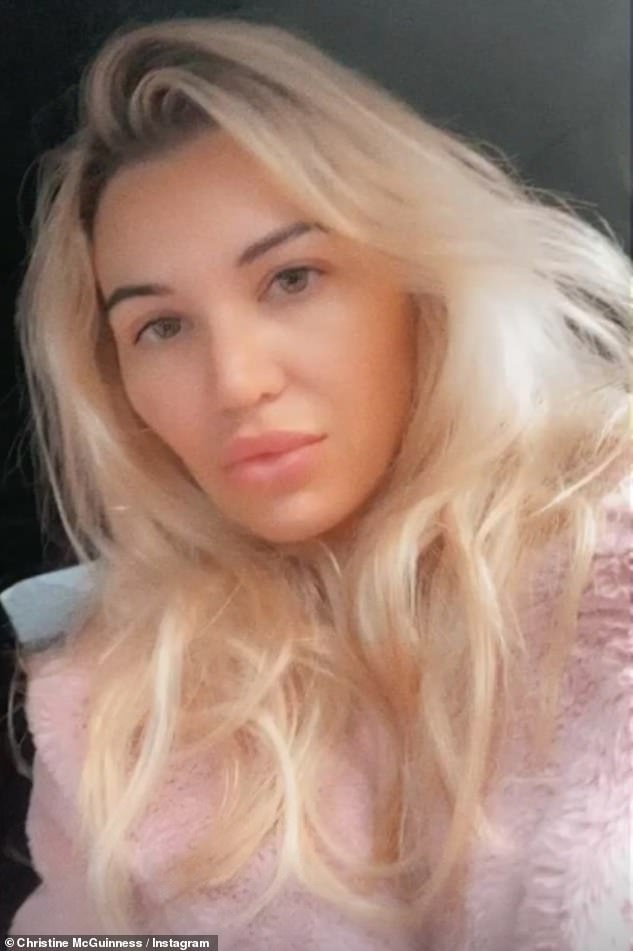 Exhausted: The Real Housewives of Cheshire star, 32, revealed she takes CBD remedies to drift off and has come to accept that sleepless nights as ‘part of her life now’ 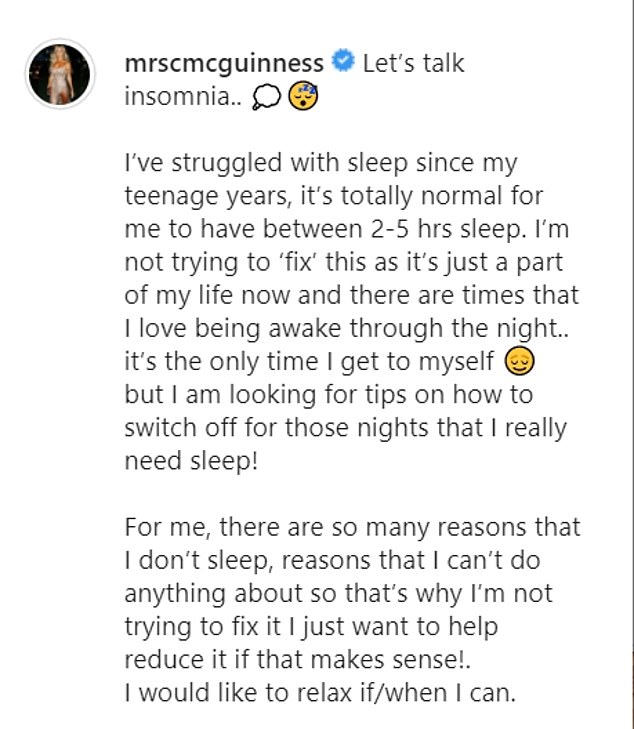 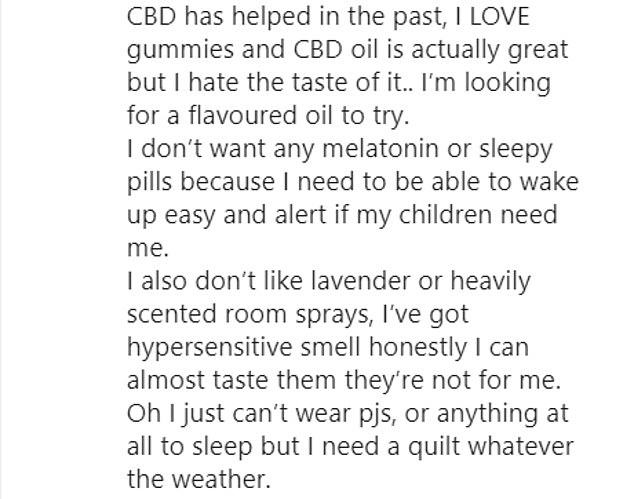 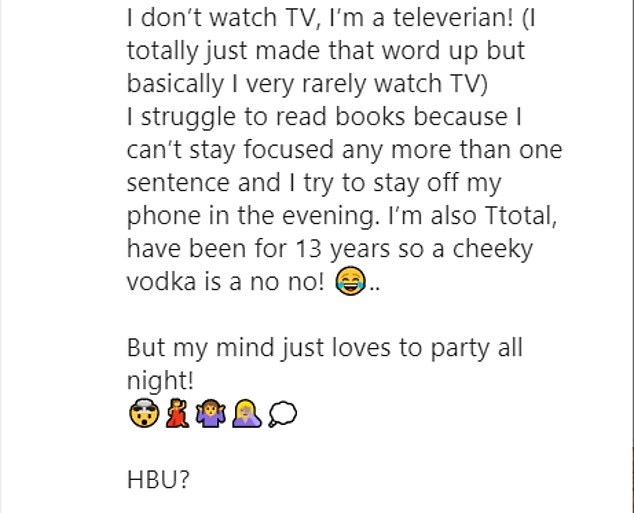 Help: The mother-of-three admitted she has struggled to sleep since her teenage years and doesn’t like sleep medication as she isn’t able to wake up easily and tend to her children

Christine continued: ‘CBD has helped in the past, I LOVE gummies and CBD oil is actually great but I hate the taste of it.. I’m looking for a flavoured oil to try.

‘I don’t want any melatonin or sleepy pills because I need to be able to wake up easy and alert if my children need me.

‘I also don’t like lavender or heavily scented room sprays, I’ve got hypersensitive smell honestly I can almost taste them they’re not for me.’

Christine also confirmed that she always sleeps nude and revealed she hasn’t drunk alcohol for 13 years.

The mother-of-three added: ‘Oh I just can’t wear pjs, or anything at all to sleep but I need a quilt whatever the weather.

‘I don’t watch TV, I’m a televerian! (I totally just made that word up but basically I very rarely watch TV).

‘I struggle to read books because I can’t stay focused any more than one sentence and I try to stay off my phone in the evening. I’m also Ttotal, have been for 13 years so a cheeky vodka is a no no! But my mind just loves to party all night!

Christine’s struggle to switch off at night has been made worse by her mother’s recent breast cancer diagnosis.

In September, the Real Housewives star disclosed the tragic news to her Instagram followers and said her mother has already started losing her hair following chemotherapy.

The glamour model admitted she had been ‘hit hard’ by the news, as she detailed her mum’s magical bond with her three children and referred to her as her ‘best friend’ and ‘rock’. 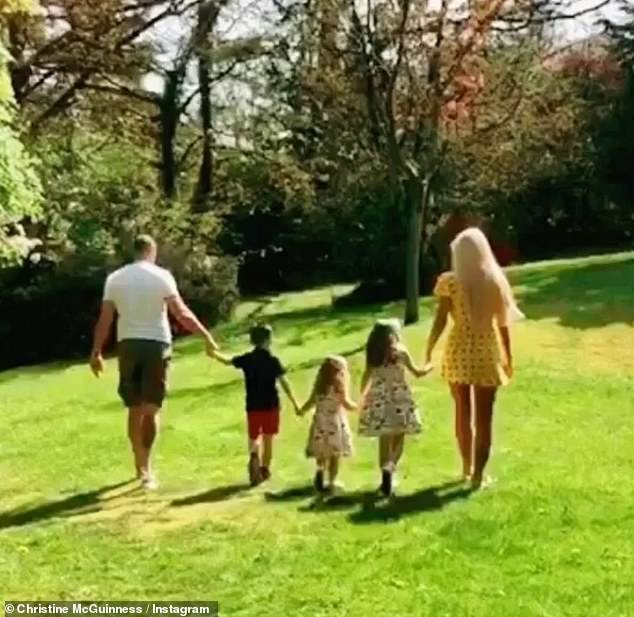 Mother duties: Christine is married to comedian Paddy McGuinness, 47, and is parents to twins Penelope and Leo, seven, and Felicity, four (pictured)