There are not many suburban chores more therapeutic than a trip to the tip. It is a kind of vengeance on all of life’s disappointments.

That microwave which came with an 80-page booklet of instructions in Mandarin – chuck it into the skip.

Those hideous carpet tiles you have wanted to rip up since you moved in ten years ago – into the skip. Broken lampshades, holiday souvenir tat, Christmas toys the kids played with twice and forgot – skip, skip and skip.

The natural reaction in Us of middle-aged dad Douglas, after his wife Connie woke him up in the middle of the night and said she was leaving him, was to load up his hatchback with bin bags. 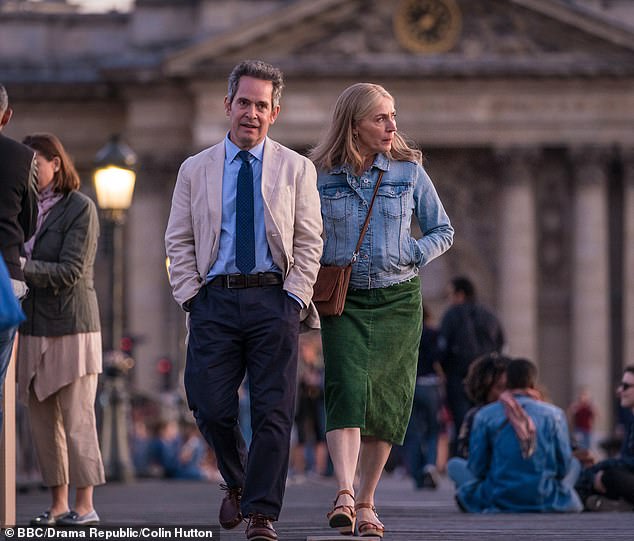 Then he sat at the recycling centre, listening to Mozart on the car stereo, before venting his misery on cardboard packaging. He felt better after that. Who wouldn’t?

Tom Hollander captures emotionally inadequate Douglas so perfectly that, from the first scene, it felt as if we had known him for years.

He is gentle but irritable, kind but thoughtless, and quite oblivious to the fact that he is boring his wife to death until she announces she cannot bear living with him any more.

Connie (Saskia Reeves) is a naturally restless soul who has been immersed in motherhood for almost 20 years. The couple have a son, Albie (Tom Taylor), and there is a strong suggestion that they lost another child, a daughter.

But Albie is 18 and about to leave for university… and Connie is already terrified of losing her identity when she ceases to be a full-time mum. To Douglas, she is a surrogate mum too. If she leaves him, he won’t be so much divorced as orphaned.

All of this became clear in the course of the first heartbreaking five minutes. The couple talked until dawn, as Douglas tried everything to win an argument that he had lost before she had even woken him up.

He wheedled, he huffed, he threatened and most of all he used logic – applying his intellect to the problem, as if his wife was an electrical appliance whose wiring was faulty.

During all this, and for the rest of the hour, there was never a moment when we did not feel Connie and Douglas loved each other deeply. ‘You’re great,’ she sighed. ‘I just don’t think I can spend my whole life with you.’

To add to the poignancy, flashbacks show us that this rift lay hidden in their marriage from the start, an elephant trap that one of them was bound to blunder into eventually. 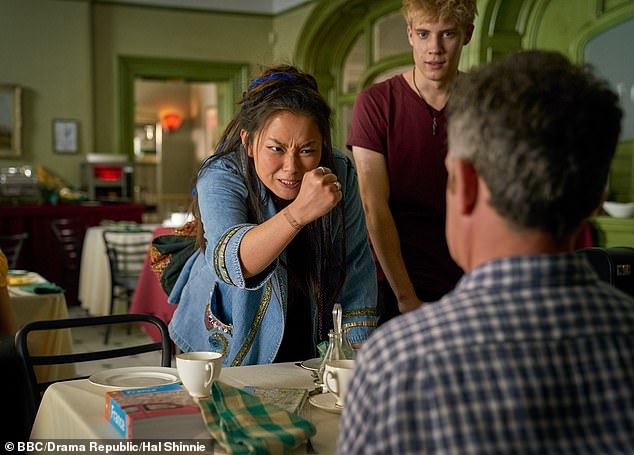 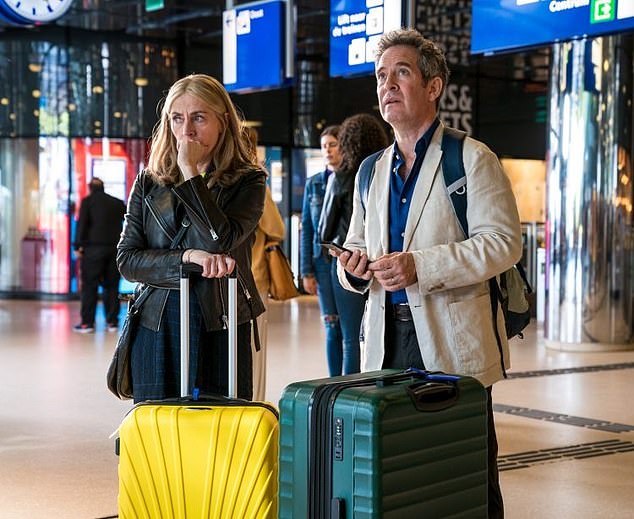 Tom Hollander captures emotionally inadequate Douglas so perfectly that, from the first scene, it felt as if we had known him for years

Gina Bramhill and Iain De Caestecker play the couple when they met, at a dinner party in the mid-1990s. He was a biochemist, studying the genome of the fruit fly and unable to comprehend why other people didn’t find science fascinating.

She was a bedsit drifter and art school graduate, on the rebound from some grand romance. Douglas gave her the security that she was never convinced she wanted.

Both young actors are so like the older stars, both in looks and mannerisms that it is easy to believe we really are watching the same characters at different ages.

That sensation is heightened by the theatrical way the flashbacks are framed, as cheesy as a young Tony Blair’s grin.

In one shot on a street corner, where Connie was feeling woozy from her ecstasy pill, Eva Herzigova gazed down from a ‘Hello Boys’ Wonderbra billboard.

Next door was a Rewind video store. Gradually, it is getting easier to appreciate that the 1990s belong to a different century.

That is how long Douglas and Connie have been together. Separating is going to be harder than either of them can imagine.

And it is Connie who, though the break-up is her idea, insists they should go ahead with their planned family summer holiday… for Albie’s sake.

That is the cue for a series of set-piece scenes around Europe, starting on the Eurostar and then visiting Paris – where Albie acquires a boisterous girlfriend (Thaddea Graham).

Unless you have read the book by David Nicholls, which I have not, it is impossible to guess whether Douglas and Connie will still be together at the end of this four-part drama.

Albie is the reason they have survived together so long, but Douglas is barely able to speak to his son. He is not self-aware enough to realise that this is partly because of his own immature jealousy – he resents the fact Connie and Albie are so close.

The fact that Hollander can show us all this, revealing what Douglas feels and yet does not know, underscores what an exceptional actor he is.

He never shows off. Everything is suppressed and tightly knotted, like the ties Douglas wears.

Even when he broke down and wept for an instant, in the car at the dump, his emotions were smothered under thick layers of corduroy and woollens. Somehow, we could see them.

But unless Douglas can find them and share them with Connie, the marriage is over.

Oh, and if you recognise young Tom Taylor, that is probably because he was the young son of the warring couple in Doctor Foster. Tom must be a talisman, because Doctor Foster was the last family drama on TV that was half as good as Us.