It’s Love Island in breeches… and out of them too! CHRISTOPHER STEVENS reviews raunchy Jane Austen adaptation Sanditon

Breeches be bothered! Nearly 25 years ago, Colin Firth set pulses galloping when he emerged from a lake in Pride And Prejudice, shirt and trousers clinging wet.

How tame that seems now. The gentlemen of Sanditon were fully nude as they charged down to the water’s edge for a dose of ‘sea-bathing’.

Sozzled Arthur (Turlough Convery) was in such a hurry to tear off his clothes that he hopped across the sands bare-bottomed with one leg in the air, wrestling his long johns. And to judge from the teasers that aired before the eight-part serial started, we haven’t seen everything yet. So to speak.

Jane Austen’s little-known final novel, set in the imaginary seaside town of Sanditon and following the adventures of young Charlotte Heywood, was unfinished at her death aged just 41 in 1817. This adaptation is, like the earlier P&P, the work of Andrew Davies. 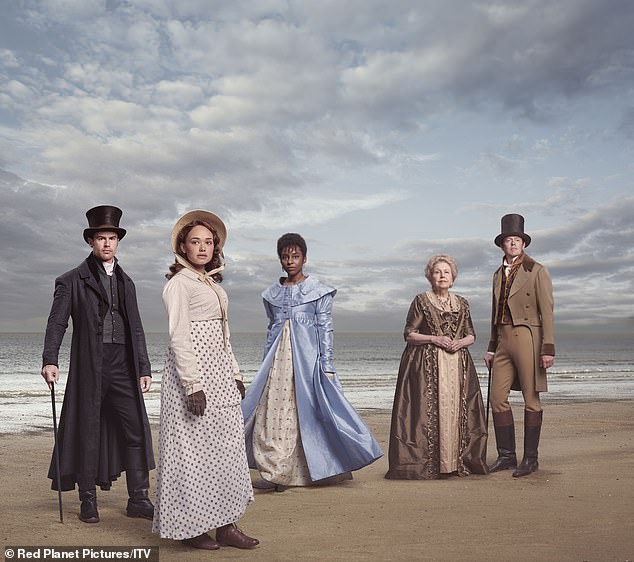 Sex aside, Sanditon was an absolute joy. The show is based on Austen’s lesser known final novel and follows the adventures of the young Charlotte Heywood (Rose Williams pictured second from left)

Notorious for ‘sexing up’ classic literature for TV, Randy Andy is leaving even less to the imagination than he did in the Nineties.

Miss Austen made only the most oblique allusions to matters immodest. Two centuries later, ITV is so insistent on showing us the action her work becomes practically pornographic.

When wide-eyed heroine Charlotte (Rose Williams) stumbled on her friend Clara in the woods with dastardly Sir Edward (Lily Sacofsky and Jack Fox), the pair most certainly weren’t having a teddy bear’s picnic. Later, Clara tried to explain that she was obliged to do something bad to avoid something worse, but even Charlotte wasn’t fooled. We all saw what you were up to, Clara. From several angles.

The problem with all this is not that it’s unfaithful to Jane Austen’s imagination, or even that the Regency Love Island crudity is a betrayal of her story-telling. It’s that, in future, anything less than X-rated will seem coy. Scenes not just of nudity but of full-on sex are now normal, no matter how innocent the source material.

Still, sex aside, Sanditon was an absolute joy, with wonderful characters and wicked intrigue.

Anne Reid was having the time of her life as Lady Denham, the wealthy widow surrounding herself with greedy young relatives hoping for a slice of her fortune. In return for a faint hope of being mentioned in her will, the old girl demanded the privilege of being as rude as she liked to everyone. Austen loved these imbalances of power in families, because they provided an opportunity to mock all concerned – the spiteful old bully and the grovelling youngsters.

Nowadays we view the south coast splendours of Bognor and Bournemouth as faded relics, so it’s fun to realise that 200 years ago they were busily being built by entrepreneurs and property developers, most up to their pince-nez in debt. 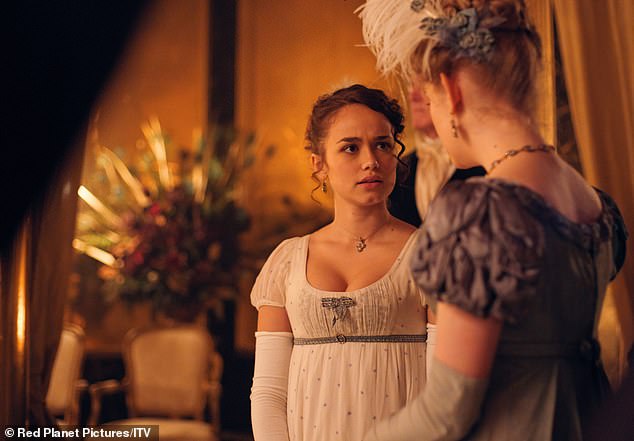 This adaptation used computer graphics to sketch the streets and seafront promenades. It was all sweepingly ambitious, like the architecture, but in the end it was just a backdrop. With Austen, we expect arrogant heroes, naive but resourceful heroines, plotting cousins, faithless friends and at least one comically drunken brother-in-law. In other words, we want a replay of Pride And Prejudice, and Sanditon delivers that shamelessly.

Almost from the outset, we were left in no doubt Charlotte would meet the charmless but dishily good-looking hero, Sidney (Theo James), for the first time at a grand ball. They danced, they flirted. Quite right – any other plot would be unthinkable.

Bursting with his usual clumsy energy, Kris Marshall played the flaky tycoon Tom Parker. As he fell over his feet in his desperation to chivvy cash out of his investors, he looked like every chancer in a shiny suit who ever bellowed business deals into his mobile on the train.

It’s extraordinary to think that people like him existed two centuries before the smartphone – but that’s the magic of Jane Austen.