She’s been vilified by the public following her explosive clash with Kim Woodburn last week, during which she was accused of ‘bullying’ her former CBB nemesis.

And Coleen Nolan has now issued an apology for the controversial Loose Women row, joining Holly Willoughby and Philip Schofield on the This Morning sofa on Tuesday for an emotional chat.

The 53-year-old star broke down in tears as she revealed the backlash has been ‘horrendous’ and said she’s even been send death threats, with sick trolls urging her to ‘die like her sister’ Bernie. 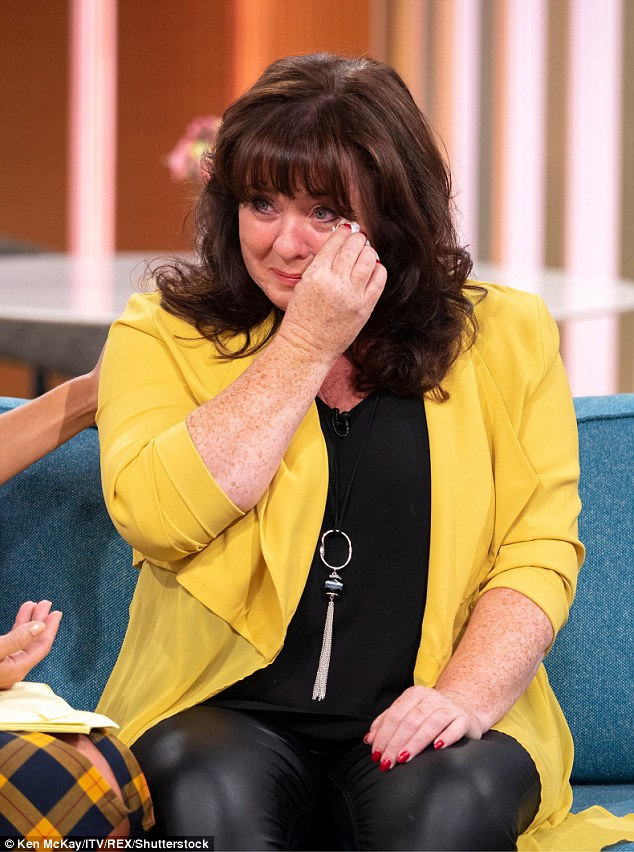 Breaking down: Coleen Nolan has finally apologised for her explosive clash with Kim Woodburn last week, during which she was accused of ‘bullying’ her former CBB nemesis

Viewers had slammed the Loose Women panel for ‘muttering under their breath’ while Kim broke down in tears discussing her traumatic childhood last week, sparking over 3,297 complaints to media watchdog Ofcom.

The pair had been embroiled in a feud since starring on Celebrity Big Brother together in January 2017, but people at home felt Coleen was in the wrong during the interview.

Coming clean about the incident, Coleen tearfully told Holly and Phil: ‘I honestly I don’t know what to say. If I could go back in time, I would change the whole thing. It was never meant to be like that, I thought Kim was coming on to make amends.

‘It didn’t go that way obviously from the moment she came out. It was genuinely shocking for the both of us.

‘I didn’t want anyone to be distressed. It’s been the worst week of my life.’

The Nolans singer then descended into hysterical tears, sobbing as she recounted the terrible death threats trolls have been sending her.

‘I don’t know what I did wrong. I didn’t say anything in that interview because she needs help and I feel sorry for her’, she wailed. 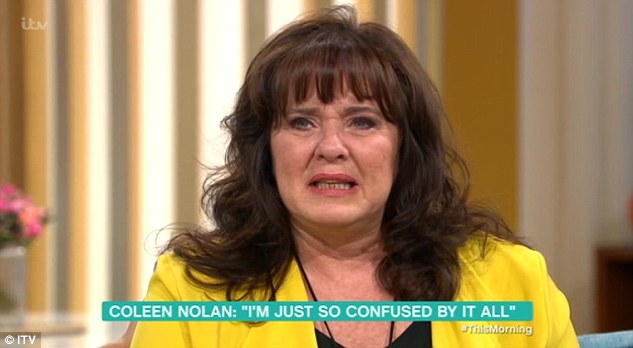 Terrible time: The 53-year-old star broke down in tears as she revealed the backlash has been ‘horrendous’ and says she’s even been send death threats, with sick trolls urging her to ‘die like her sister’ Bernie 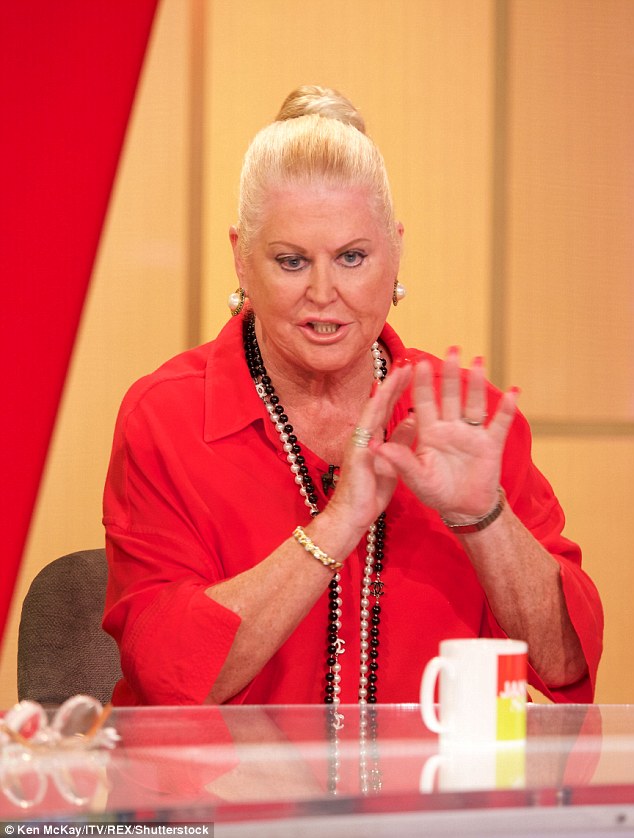 Accused of bullying: The star has been caught in the midst of a fan furore after her confrontation with Kim on Loose Women went viral last week 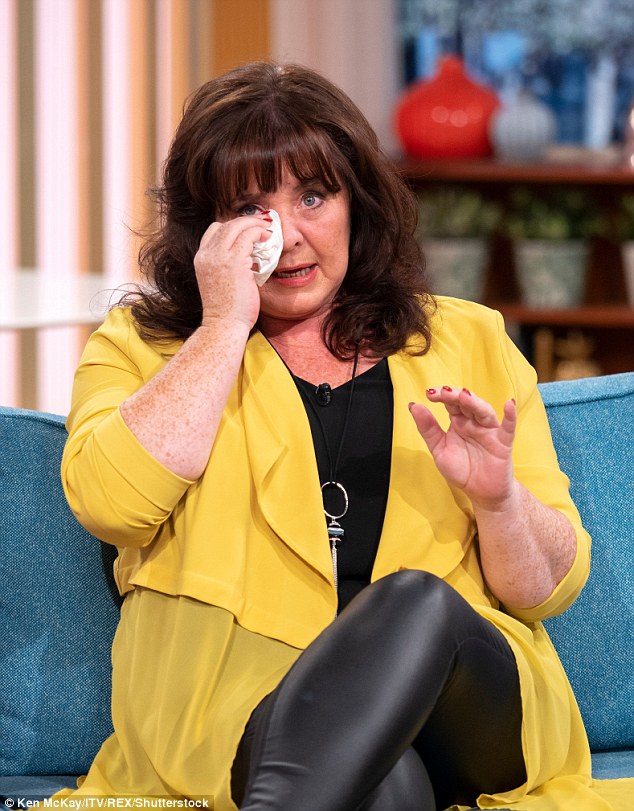 Coleen lamented: ‘I didn’t want anyone to be distressed. It’s been the worst week of my life’

Coleen’s sister Bernie tragically passed away from cancer in July 2013. She was the lead vocalist of the Nolans, the family band also formed of Coleen, Anne, Denise, Maureen and Linda Nolan.

The Loose Women regular – who is planning to embark on a solo singing tour without her sisters – went on to reveal she was thinking about quitting showbiz for good.

She sobbed: ‘I’ve called my managers, my family saying I don’t want to do it anymore. I think I’m strong I’ve been in it years and I’ve dealt with trolls before. 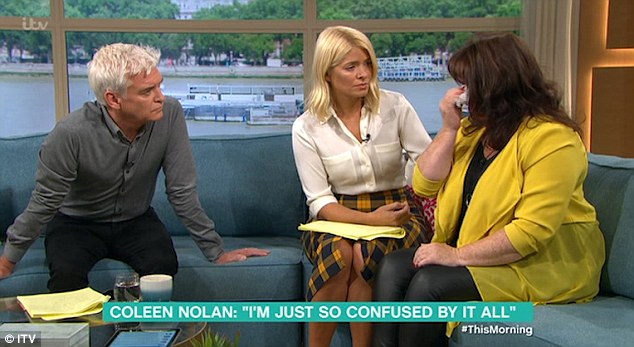 Comforting her: Coleen joined Holly Willoughby and Philip Schofield on the This Morning sofa on Tuesday for an emotional chat 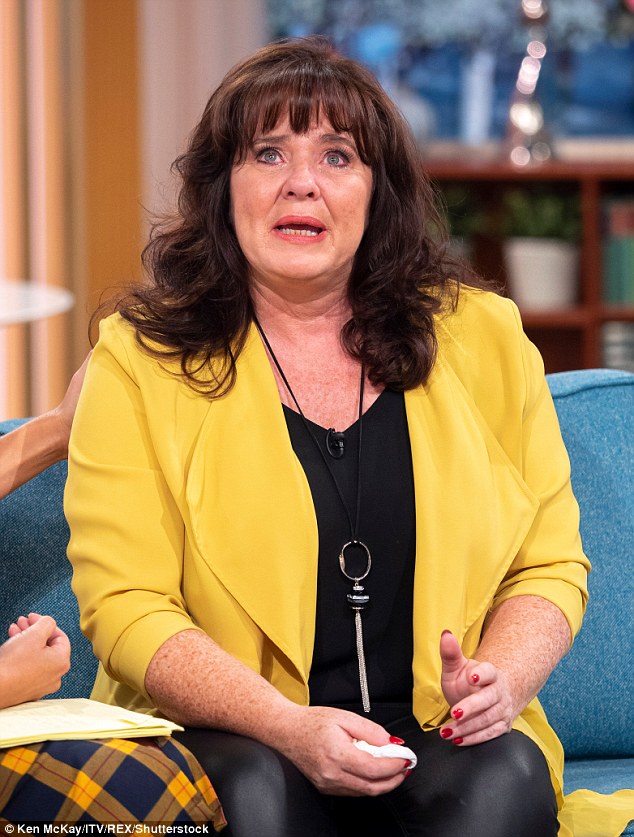 Giving it all up: The Loose Women regular – who is planning to embark on a solo singing tour without her sisters – went on to reveal she was thinking about quitting showbiz for good 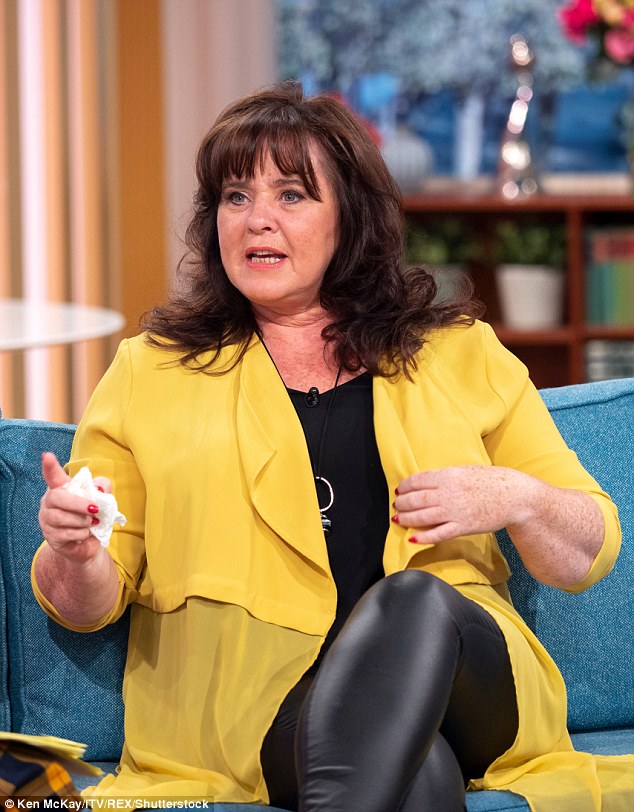 Upsetting: Coleen confessed the Change.org petition to get her fired from the Loose Women panel had devastated her

Coleen confessed the Change.org petition to get her fired from the Loose Women panel had devastated her.

She also said she’s quit her social media accounts in a bid to seek solace from the relentless trolling.

The TV personality continued: ‘I’ve had a week of it. I’m doing a job I really love to do and a campaign to get me fired. Its been a really hard week. I feel such an idiot [about crying]’.

Coleen concluded her This Morning appearance with a further apology, saying, ‘I apologise to anyone who were offended by it. It’s been horrendous’.

The interview was hotly debated by fans on social media, with viewers at home divided about whether her apology was sincere.

Fan reaction: The interview was hotly debated by fans on social media, with viewers at home divided about whether her apology was sincere

Likening her to Roxanne Pallet, one viewer posted: ‘#ColeenNolan on #ThisMorning another bully crying crocodile tears as they did not get the reaction they wanted.’

Another wrote: ‘Appalled at the fact #This Morning and ITV are still given coleen nolan air time after outright bullying kim woodburn last week, disgusting’.

Other fans were far more sympathetic to the TV star, branding the segment ‘heartbreaking’.

‘I’ve watched loose women from the beginning and this shocked me. She’s no bully. I cried with her!’, another shared.

Another shared: ‘No matter what you think of Coleen, you don’t wish someone cancer or death. It’s vile #thismorning’.

Her comments come as the petition calling for her to be fired following the row with Kim has almost reached its 25,000 target. 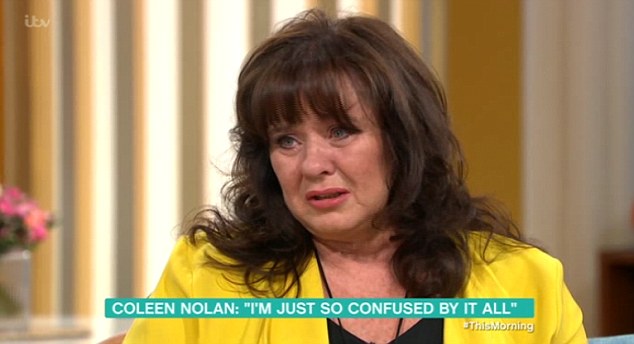 Distressed: Coleen concluded her This Morning appearance with a further apology, saying, ‘I apologise to anyone who were offended by it. It’s been horrendous’ 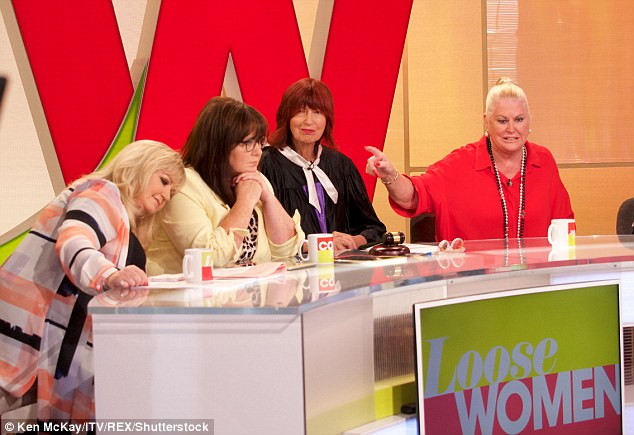 Explosive: The TV personality hit back at claims she had bullied Kim as she spoke about her traumatic childhood on Thursday’s edition of the show

The description reads: ‘The treatment of Kim Woodburn by Coleen Nolan on Loose Women today (Wednesday 29 August 2018) was outrageous and should be condemned.

‘We, the undersigned, demand Coleen Nolan is removed from the Loose Women panel indefinitely for her atrocious act of unprovoked bullying. Say ‘No’ to Nolan!’

Those who signed the petition appeared outraged at Kim’s treatment on the show, claiming that it was upsetting to watch.

One viewer said: ‘Awful to watch and genuinely upsetting. Something needs to change if this is considered television.’

While another simply added: ‘I don’t agree with bullying!’ 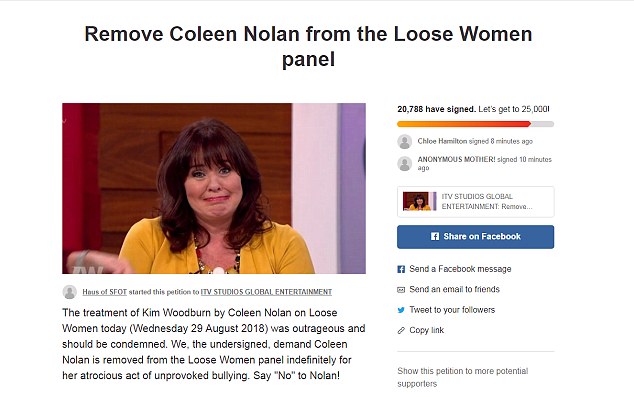 Spat: A petition was set up on Change.org the day after the appearance calling for Coleen to be sacked 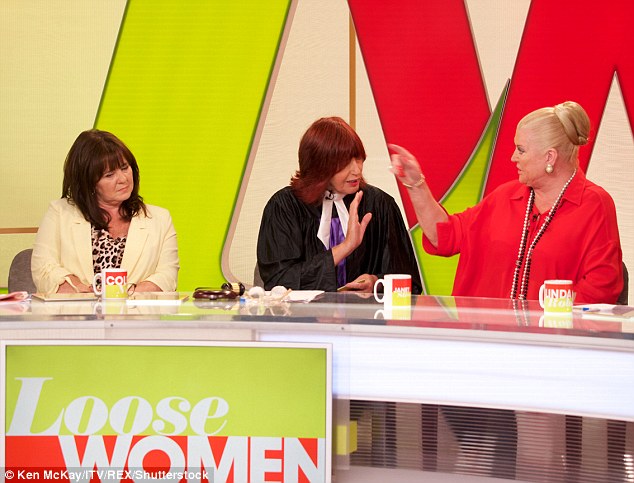 Comment: Mics picked up Coleen saying ‘that’s what I lived with.’ Coleen says she was commenting on the ranting, and not Kim’s childhood

A third wrote: ‘This also supposed to be about fun at Kim’s expense. I also didn’t like that it came just after Coleen and her sister had been discussing self harm and mental health, so important but it was like they gave their own health airtime and importance but then showed a complete lack of regard for Kim’s.’

MailOnline has contacted representatives for ITV and Coleen for comment.

Coleen last week insisted she is not a bully’ after fans slammed the hit show’s panel over their behaviour towards Kim.

In a previous interview with The Mirror, the TV personality hit back at claims she had bullied Kim as she spoke about her traumatic childhood on Thursday’s edition of the show.

She said: ‘Anyone that knows me knows I’m not a bully. That would be the most hurtful thing people could call me.

‘I didn’t want to do the reunion. It was the producers who said she wanted to make peace. I agreed because I was happy to draw a line under past differences’, referring to the pair’s fractious relations in the Celebrity Big Brother house in 2017.

INSIDE KIM WOODBURN’S TRAGIC PAST:

The furore began when How Clean Is Your House presenter Kim, 76, was discussing her traumatic past on Loose Women last week

But what’s the real story behind Kim’s past? 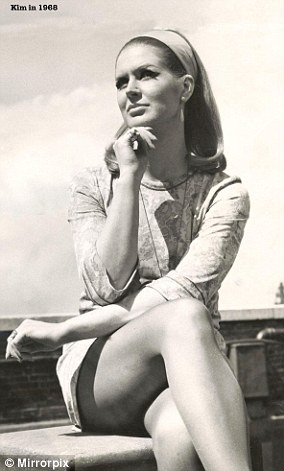 She previously revealed she had been physically and sexually abused by her father while growing up in Eastney, Hampshire

Her father, a serial philanderer, would beat her with carpet brushes during drunken rages

Kim was also a victim of sexual abuse, which she says began when she was two years old

She has said of her difficult childhood: ‘You can’t shrug off all those years of neglect and brutality’

Kim was born with no vision in one eye and limited vision in the other. This led to her being bullied at school and given the name Squinteye

When she started work in a factory making Meccano cars, she began injuring herself due to her eyesight

Aged 16, she ran away from her abusive home and got a job as a cleaner

Terrified of her family’s reaction she buried her son, who had been born three months prematurely, in a park in Liverpool

‘From the moment she arrived, it was clear Kim didn’t want to make up. Now I wish I could go back in time and not do it. It was ugly, upsetting and unpleasant for everyone.’

Adding she had no idea why Kim ‘hates her’ she also denied she had muttered under her breath derogatory comments as an emotional Kim cried about being bullied as a child.

She added that she now wants to move on from the incident, wishes Kim well but wishes to forget the pair ever met.

During the now infamous Loose Women appearance last week, Kim broke down in tears as she accused Coleen of making her life ‘hell’ and bullying her during their time in the CBB house.

The pensioner went on to accuse the audience of ‘laughing’ at her, as she spat: ‘Look you folks can laugh all you want. I’m going to tell you something now and then I’m going to leave. I had a very very sad childhood, a brutal childhood, it was terrible. 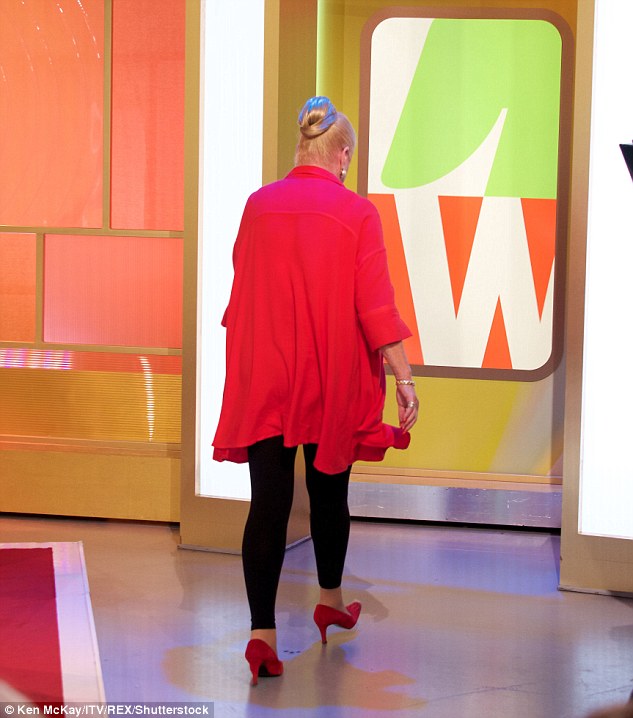 Walking out: The presenter added that she felt Loose Women bosses could have stopped the interview when things got heated

Coleen then hit back: ‘We got this every day as well’, whilst Coleen’s sister Linda said of Kim’s gripes: ‘We know, we’ve heard it.’

Shaking her finger at Coleen, Kim then angrily shouted out ‘She is trash’, as she stormed out the studio, ignoring Janet Street-Porter call out ‘She’s not trash’.

As Coleen then attempted to throw to an advert break, Kim could be heard continuing to shout out that Coleen is ‘trash’ and accused her of being a ‘bully’.

Kim explained to The Sun that she felt ‘ambushed’ during the interview, insisting: ‘It was disgusting. It was like a circus and I was there for some cruel entertainment. I want Coleen and her sister fired.’

It was claimed Loose Women lost a quarter of their viewers due to the spat between Coleen and Kim.

230,000 viewers switched off between Kim’s arrival and the moment she burst into tears and stormed off set.

TV ratings are said to show 900,000 were watching at the time of Kim’s arrival, before dropping to 710,000 as the argument intensified. 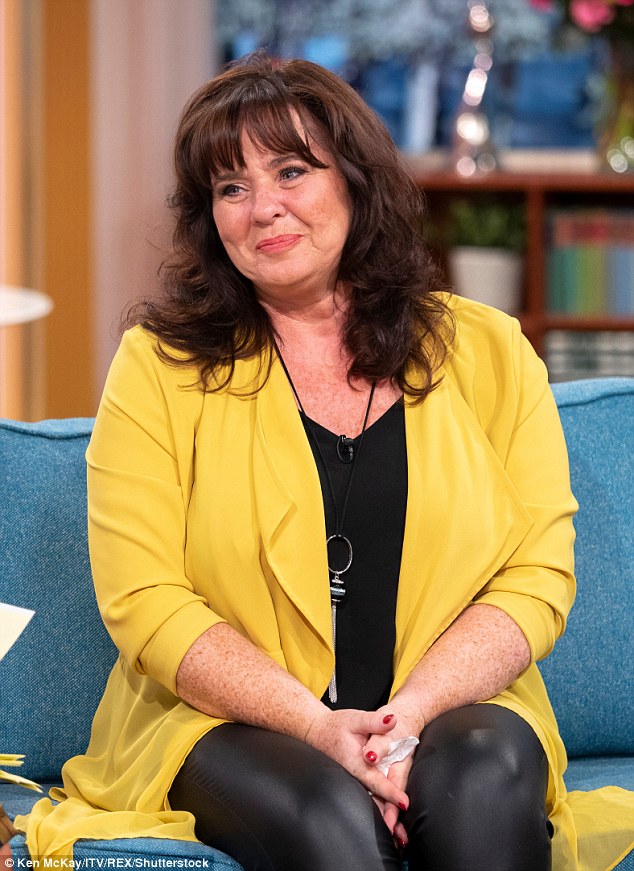 Drying her eyes: Coleen was appearing on This Morning to promote her new solo singing tour, 10 years after she last performed in public with The Nolans