And Sir Rod Stewart made sure he got the best seats in the house as he cheered on his beloved team from a VIP box at Hampden Park on Sunday.

The rocker, 77 – whose father was Scottish – wore a tartan blazer as he watched The Bhoys take on their bitter Glasgow rivals Rangers during the Scottish Cup semi-final. 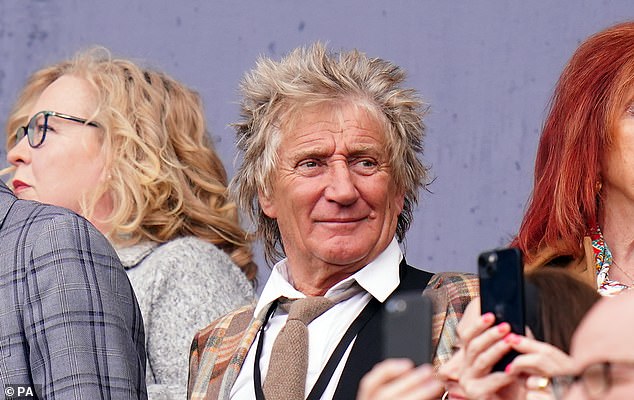 Game on! Sir Rod Stewart put on a dapper display in a VIP box as he watched Celtic take on their rivals Glasgow Rangers at the Scottish Cup semi-final in Hampden Park

Sir Rod added to his look with a white shirt and camel-coloured tie, while a pair of cream trousers and beige flat cap rounded things off.

The singer looked chirpy while greeting a friend as a lanyard badge hung from his neck, emphasizing his VIP status on the day.

Sir Rod’s outing comes after he made sure he got his family backing the team also earlier this month. 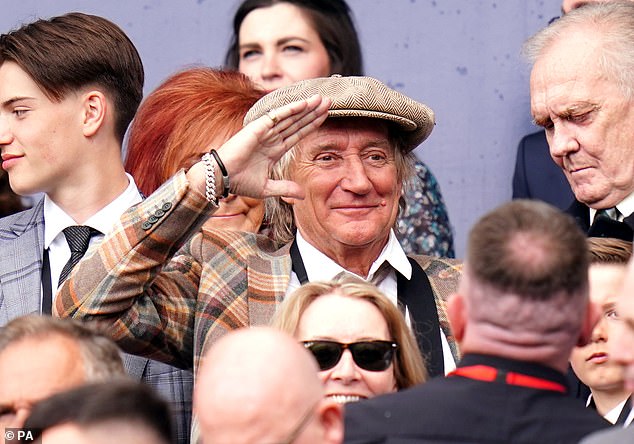 Greetings! Rod looked chirpy as he saluted a friend from the distance as he a lanyard badge hung form his neck emphasising his important VIP status on the day 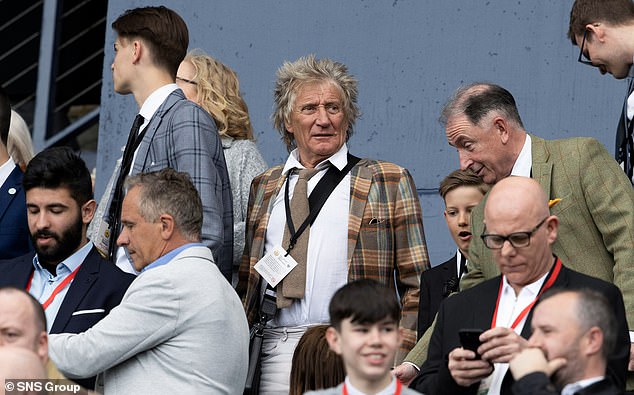 Chic: The superfan looked typically stylish in a plaid blazer, which he wore over a white shirt and camel-coloured tie

The rocker took to his Instagram account to share a family snap with his daughter Renee, 29, and sons Alistair, 16, and Aiden 11, who all kitted out in the teams colours ahead of their crunch match with Rangers.

The sweet snap was taken on the grounds of the hitmakers £4.65million mansion on the edge of Epping Forest. 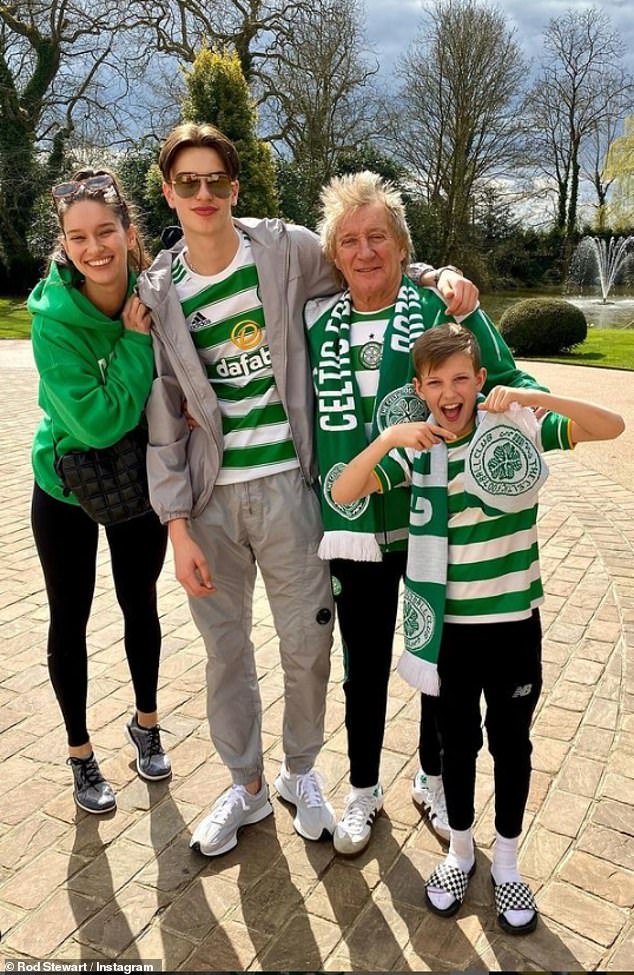 Fans: Sir Rod and daughter Renee, 29, and sons Alistair, 16 and Aiden 11 kitted out in the Celtic colours ahead of their crunch match with Glasgow Rangers earlier this month

The pretty brunette wore her tresses in a high pony as she leaned up against her younger brothers shoulder.

Meanwhile, Alistair kicked back in some grey leisure wear and one of the team jerseys.

He kept the sun at bay with a pair of oversized sunglasses as he wrapped his arm around his famous dad.

Aiden appeared to be full of excitement as he pulled an animated expression for the family picture while donning some of the team merchandise. 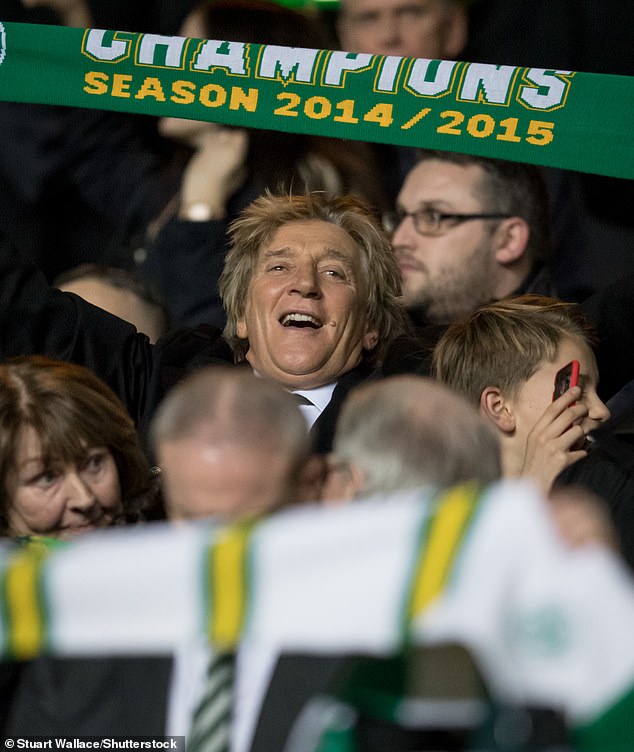 Explanation: The Maggie May singer revealed in an interview with Talksport last year how his father’s influence turned him into a member of the Tartan Army (pictured in 2017)

The Maggie May singer revealed in an interview with Talksport last year how his father’s influence turned him into a member of the Tartan Army.

He explained how it was that as an Englishman, he has become a diehard Scotland and Celtic fan.

Sir Rod was born in Highgate, North London and grew up in the UK capital. His father Robert, was Scottish.

He lived in Scotland with his English wife Elsie and their first four children were born there. 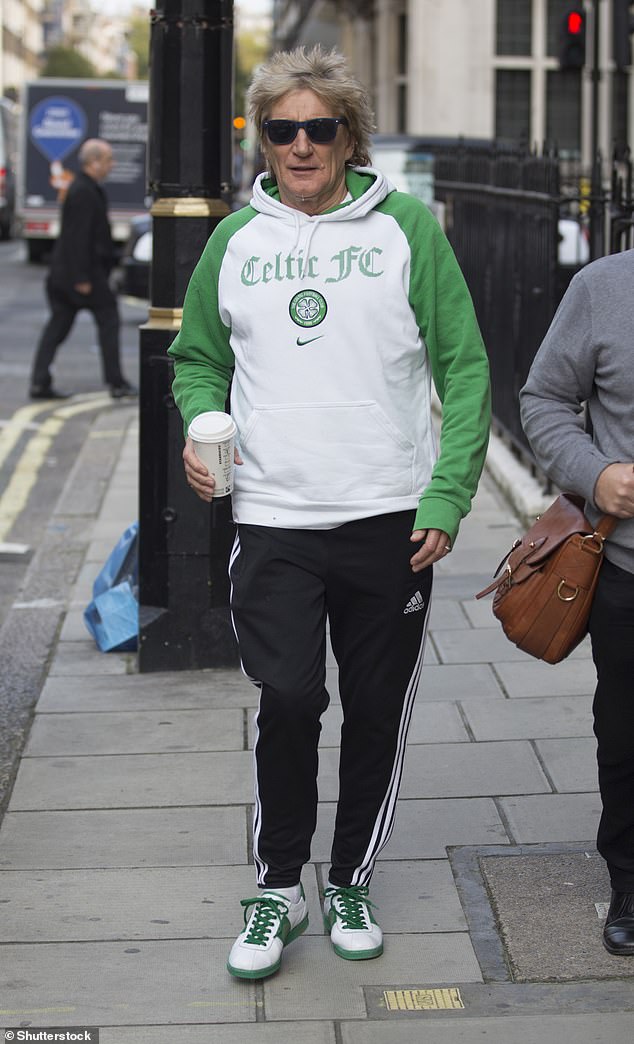 Diehard: Rod is one of the Scottish teams biggest supporters and often heads out in the kit

However, years later, the family moved to London, where Rod was subsequently welcomed to the world.

He said: ‘Yeah, to all intents and purposes I am English. I’ve never pretended I never said I was a Scotsman, so let’s get that out of the way.

‘My dad was born in Leith in Edinburgh. He had a big bearing on the football that we liked.

‘So that sort of rubbed off on me and my brothers, and we just became Scotland supporters,’ he said. 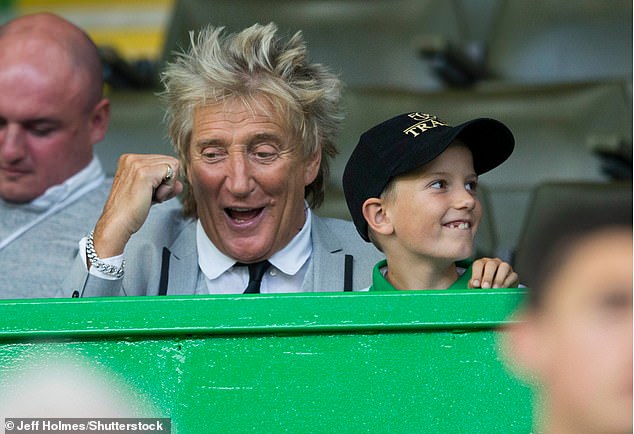 Facts: The crooner explained how it was that as an Englishman, he has become a diehard Scotland and Celtic fan (pictured with son Aiden in 2019)