Patsy moved to California in 2014 for a new life with her family after quitting EastEnders for the second time, and has regularly documented her new life in the States on social media. 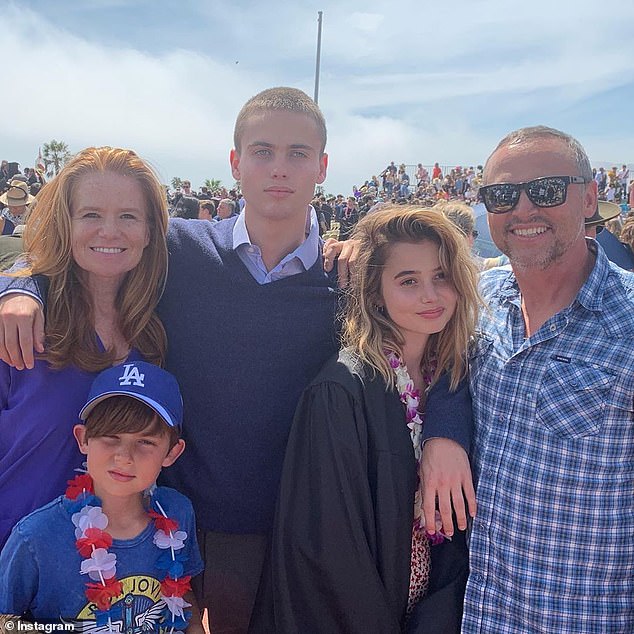 Over the moon: EastEnders star Patsy Palmer, 47, couldn’t hide her pride on Tuesday as her daughter Emilia Merkell, 17, celebrated her high school graduation

Patsy cut a chic figure in a stylish blue dress as Emilia took to the stage in full cap and gown, collecting her diploma following weeks of hard work.

The Tatler cover star was grinning from ear to ear as she said goodbye to her classmates, before the family enjoyed a celebratory bash which they documented on social media.

Emilia also appeared to reveal which university she would be attending, after displaying a mortar board with the message I wrote this on the way here but I’m going to NYU. 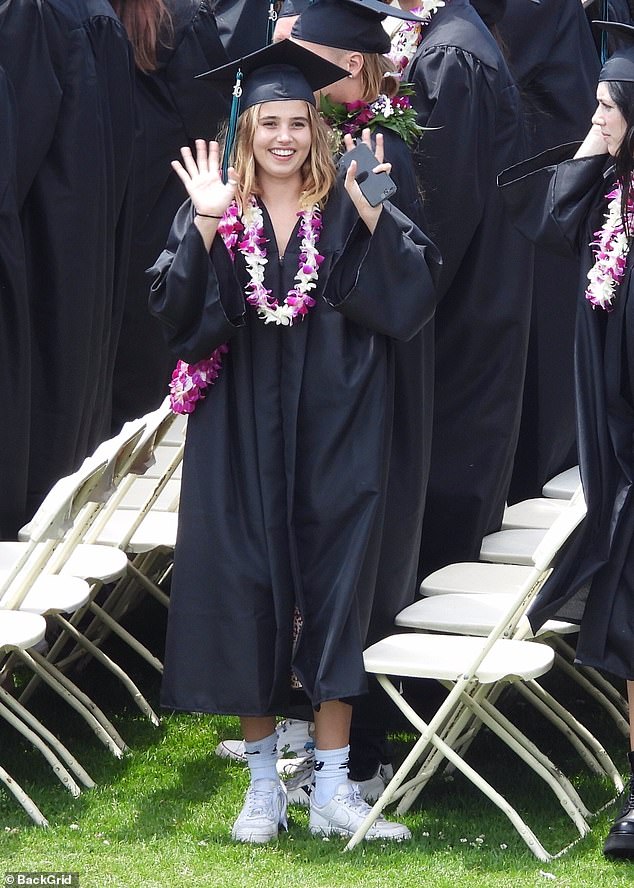 Beaming: Dressed in a cap and gown, Emilia, 17, couldn’t hide her delight as she collected her diploma from Malibu High School 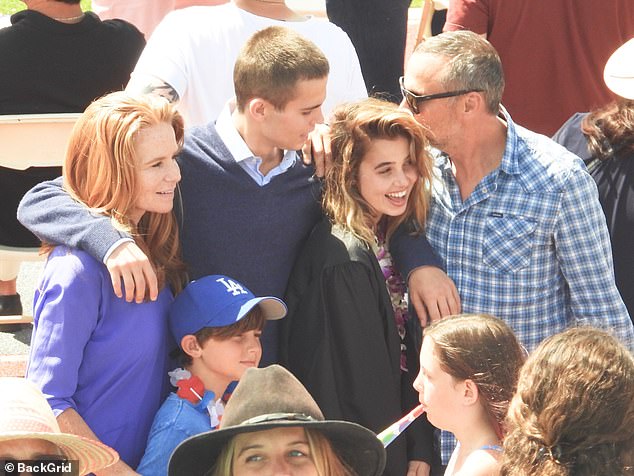 Family time: Patsy was joined by her husband of 19 years Richard Merkell, 54 and sons Fenton, 18, and Bertie, 8, to celebrate Emilia’s big day 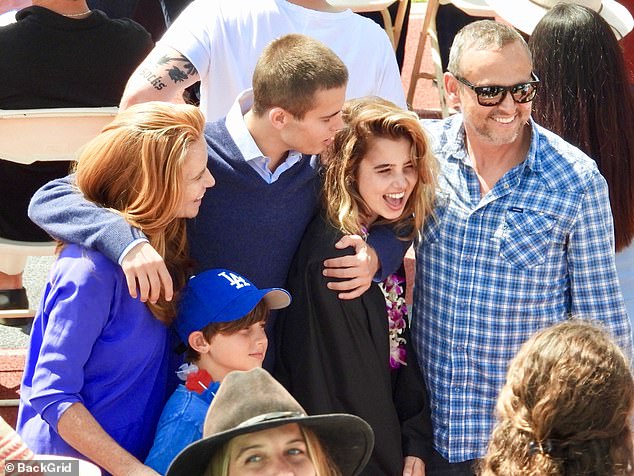 Over the moon: The family were out together to celebrate the momentous day, with Patsy cutting a stylish figure in a royal blue dress 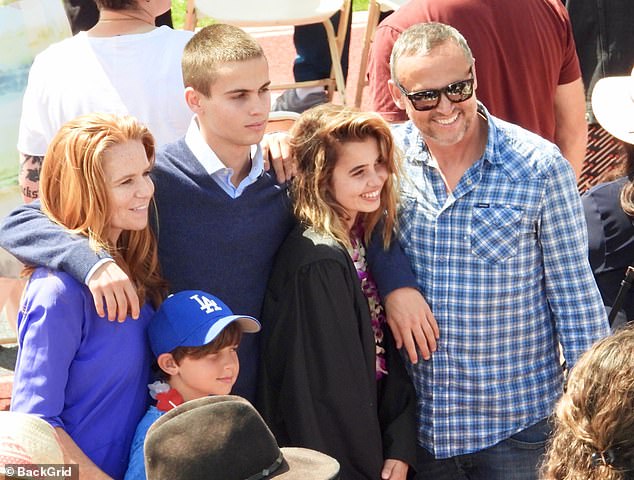 Sunny side: Patsy moved to California in 2014 for a new life with her family after quitting EastEnders for the second time 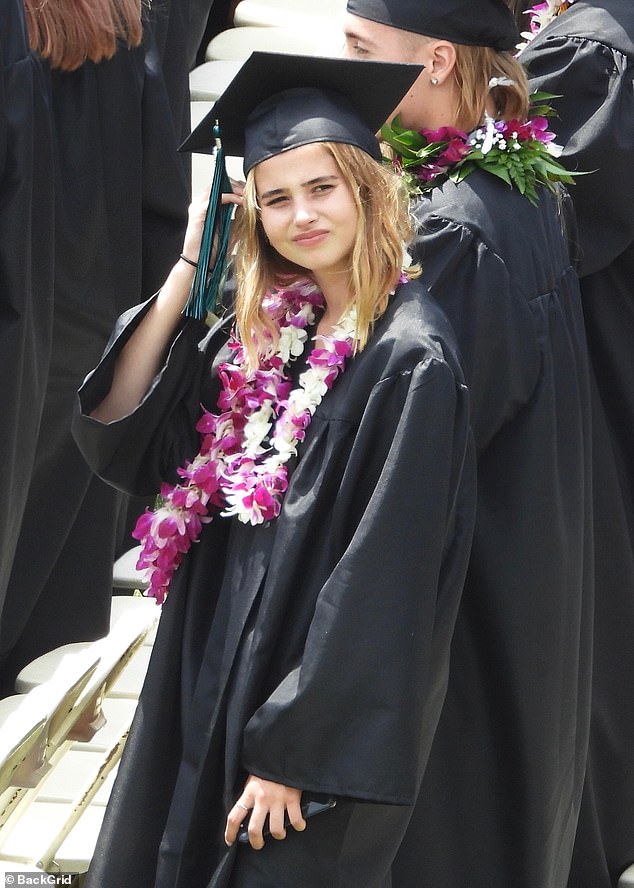 California girl: Emilia teamed her graduation look with a pretty pink floral garland, as she celebrated the end of her time in high school

Look at that! The Tatler cover star also hinted where she would be heading in the autumn, as another mortar board boasted a message that she would attending New York University

Patsy took to Instagram to post and black and white snap of the family, writing in the caption: ‘Bye bye school life.’

The soap legend later posted some selfies from the post-graduation party, with one showing Emilia posing with a female pal.

In a more candid snap, Patsy appeared to be reflecting on how much her family had grown, posting a black and white video with the caption: ‘As a parent I freaked out when my kids became teenagers.’ 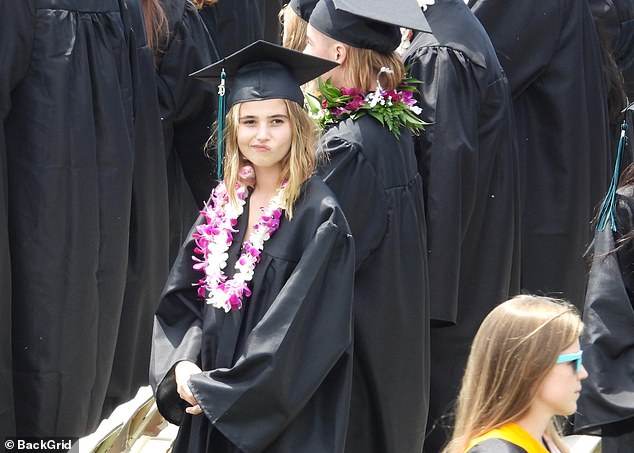 Cheeky: Emilia has been making a name for herself as a rising model, and told Tatler last year that she views LA as her home more than England 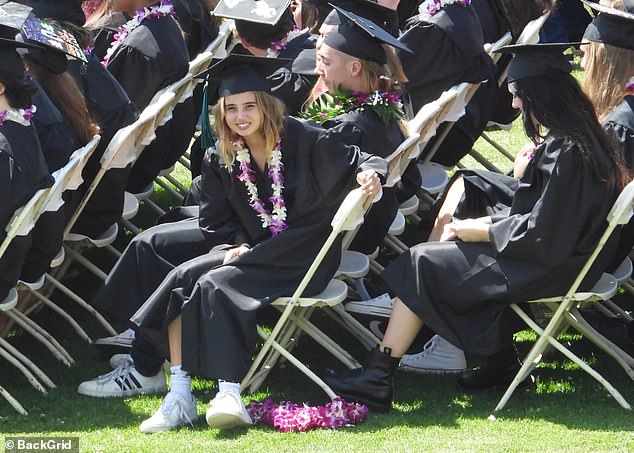 Epic: The teen has been hoping to establish herself as a model, as is pals with Cindy Crawford’s daughter Kaia Gerber 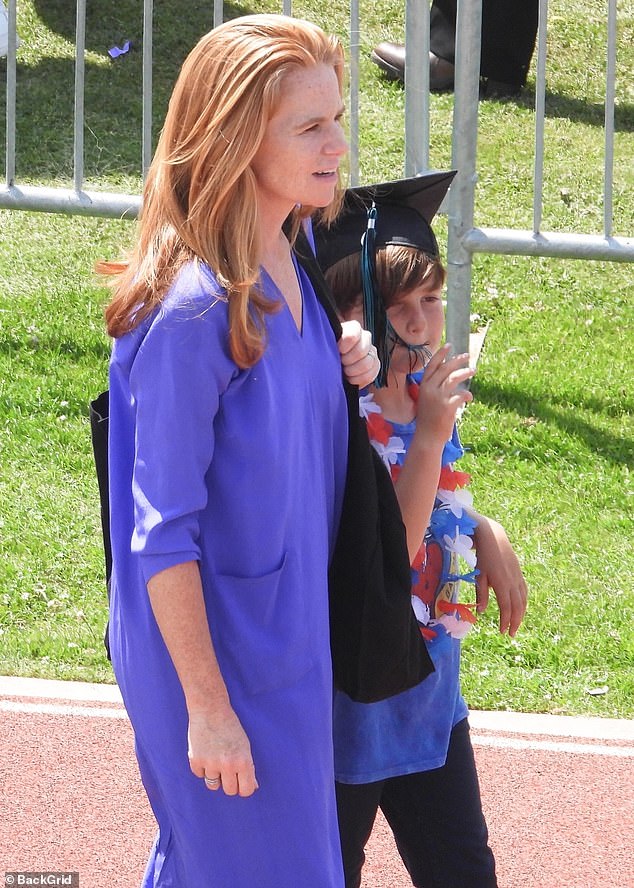 Dressed up: Patsy put on a stylish display in her chic look as she joined her son Bertie in heading to the audience to watch the big day 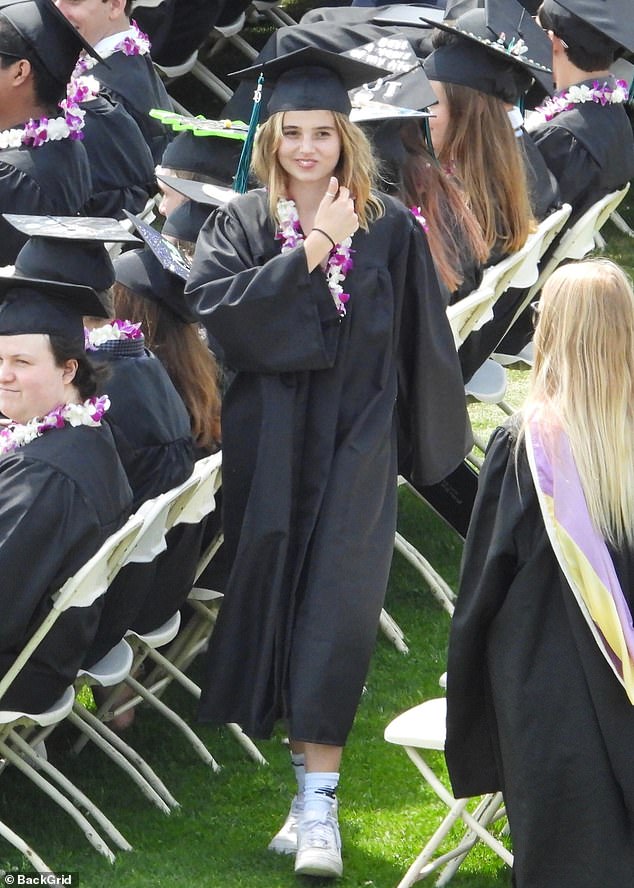 At last! Emilia was keen to follow in her mum’s footsteps with a career in the spotlight, despite the soap star admitting she wasn’t keen on the idea 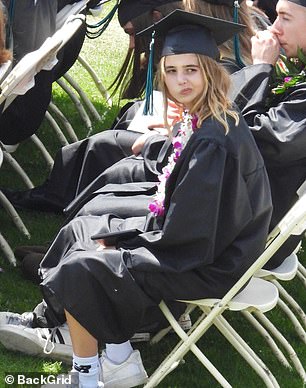 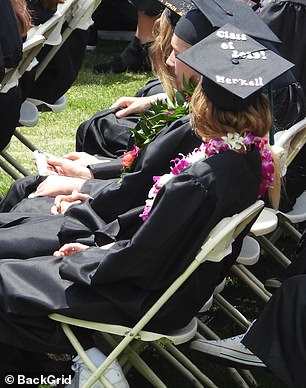 Grand occasion: As the teen sat waiting to collect her diploma, the commemorative mortar board was on full display 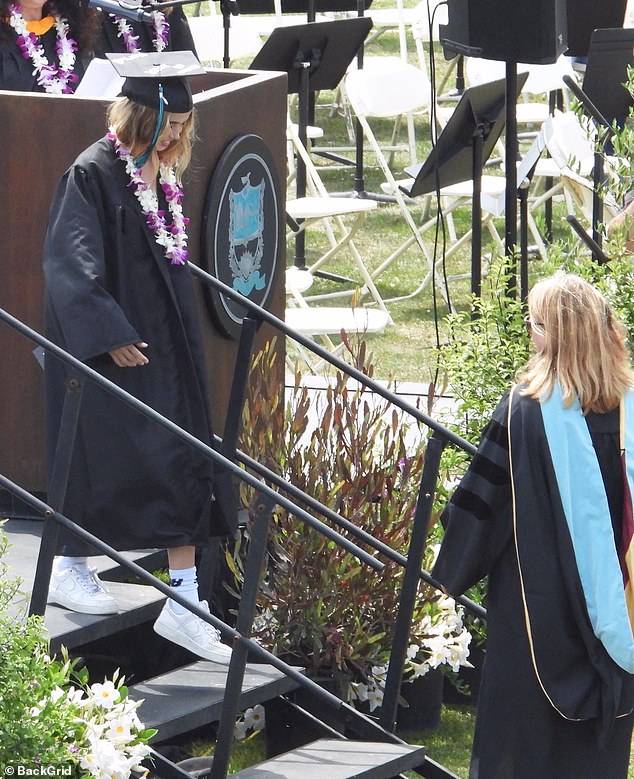 Stylish: Having collected her diploma, Emilia exited the stage with ease before going to join her family

Despite only moving to LA five years ago, Emilia recently told Tatler she views the city as her home.

The model told the publication: ‘I don’t really feel like I lived in England; I was still a baby when I was there. LA is where I’ve spent my formative years.’

With growing up in LA, Emilia has found herself becoming friends with Cindy Crawford’s model-in-demand daughter Kaia Gerber.

The teen said: ‘She was one of my first friends at school, I love her.’ 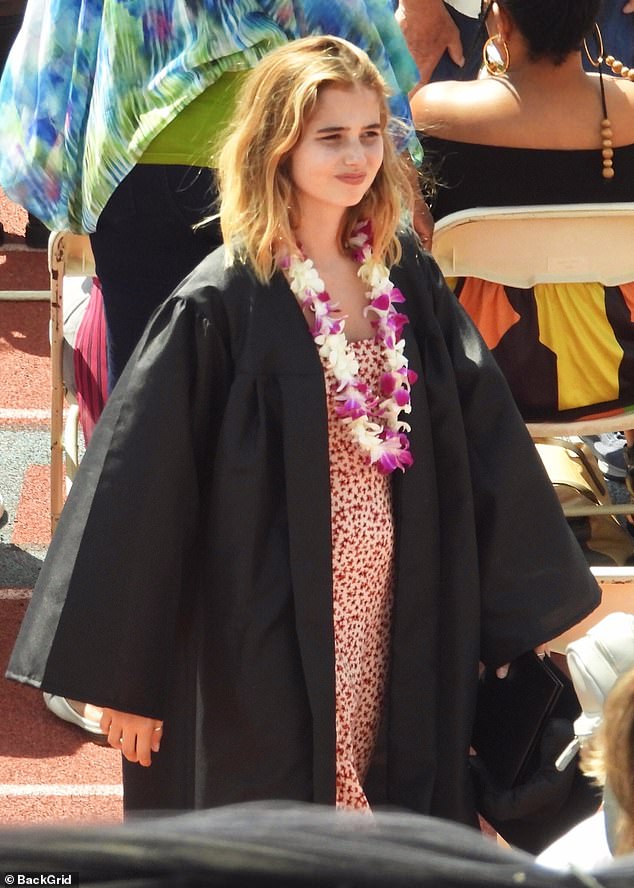 Pretty: The teen teamed her graduation gown with a stylish red and white star-printed dress 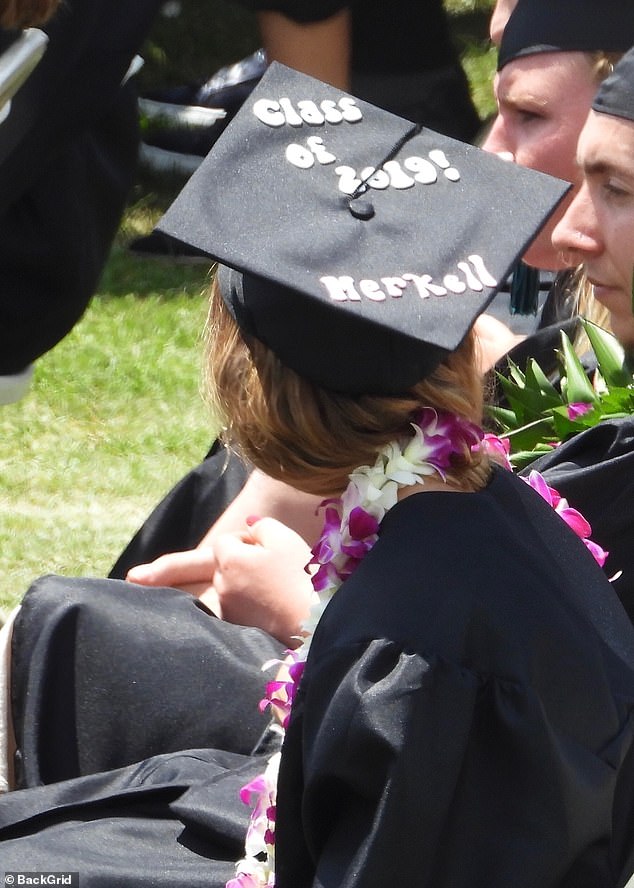 Sensational: Her mortar board was even personalised with Emilia’s surname as she sat with her peers during the ceremony 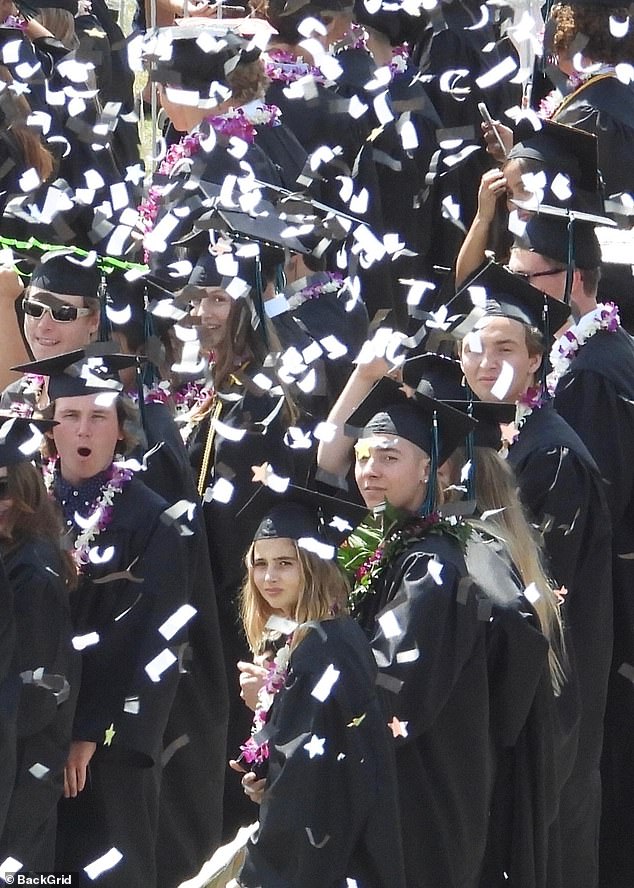 Amazing: Confetti showered on the thrilled students as they celebrated the end of their time in high school 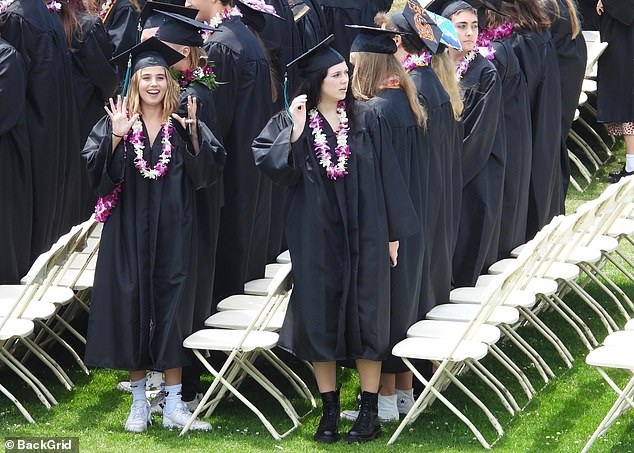 Smiling: The students were all dressed in matching caps and gowns with delicate floral garlands for the occasion 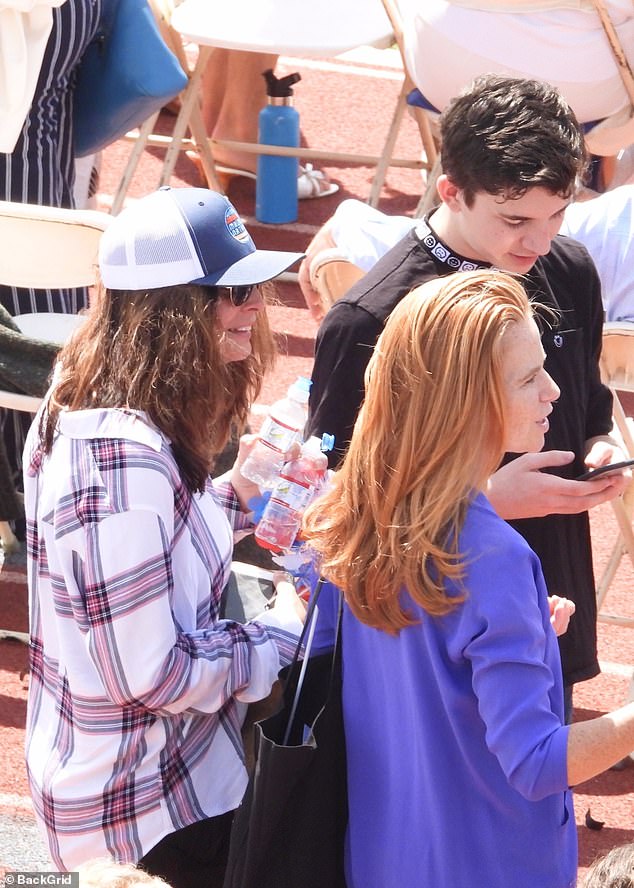 Congratulations! Patsy was joined by her loved ones as they celebrated her daughter’s big day, five years after they moved to California 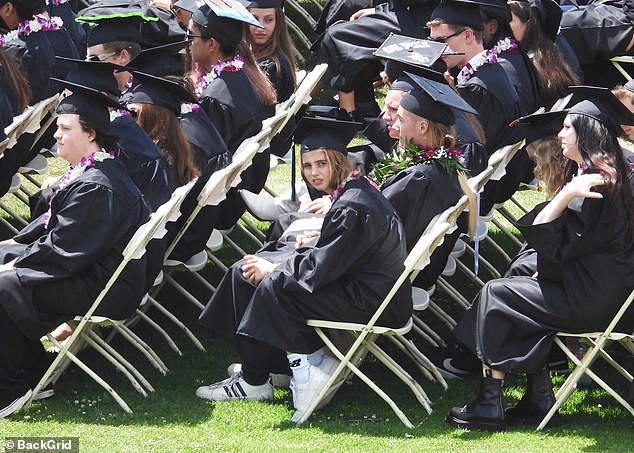 Relaxed: Emilia sat waiting to collect her diploma with her family, as she prepared to start her time at university in the autumn 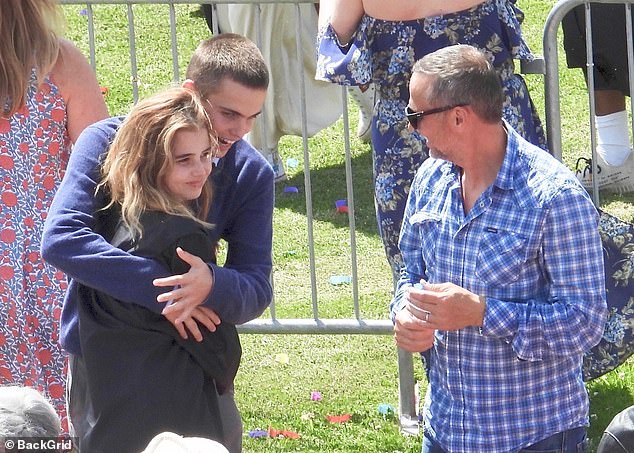 Elated: Fenton sweetly embraced his younger sister as they reunited following the ceremony

Patsy last appeared in EastEnders in 2014 when Bianca moved to Milton Keynes with boyfriend Terry Spraggan.

But the star is set to reprise her role as Bianca for a brief stint later this year, with many fans eagerly anticipating her reunion with daughter Tiffany (played by Maisie Smith).

According to The Sun, executive producer Jon Sen said: ‘I’m thrilled Patsy’s agreed to return to reprise her iconic creation in a blistering storyline that will grip fans this autumn.’

A source added: ‘Bosses are delighted to be getting Patsy back. She’s a real Enders icon and fans love seeing old faces return.

‘She has yet to get her scripts but she will no doubt be at the centre of drama when she returns in the autumn.’ 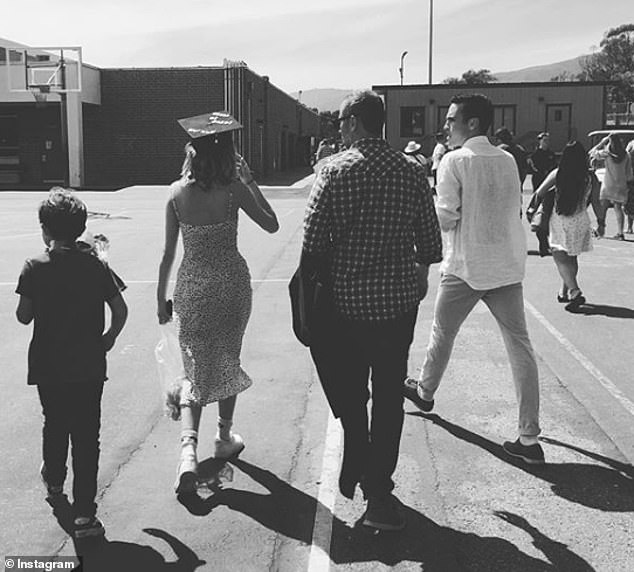 Off we go! Patsy also documented the day with a slew of social media snaps, including one which showed the family walking away from the school for the last time 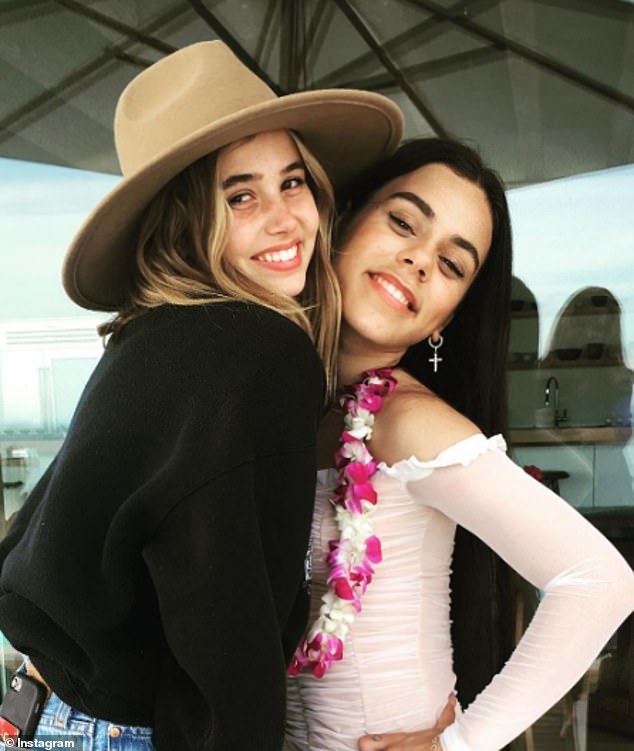 Fun: After the ceremony the family enjoyed a party to mark Emilia’s graduation, with one snap showing her posing with a female pal 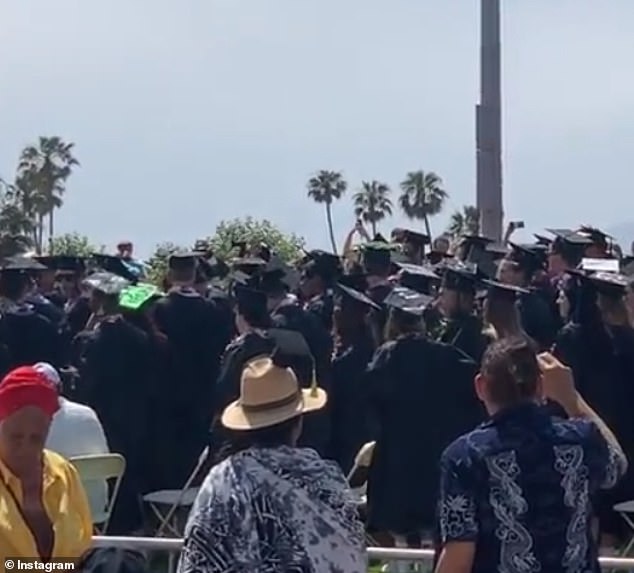 Big day: Several snaps also showed the delighted students celebrating their graduation, ready to throw their caps into the air

Patsy first joined EastEnders in 1993 as the loud-mouthed Bianca who eventually sparked up a romance with Ricky (played by Sid Owen) with the couple’s 1997 wedding going down in soap history.

The couple went through some difficult times, including the sad loss of their baby daughter Natasha after learning she had Spina bifida just 20 weeks in the pregnancy.

Ricky’s married to Bianca came to an end when she left Albert Square in 1999, but unbeknownst to Ricky, she was pregnant with his daughter Tiffany.

Bianca went through plenty of hard times as she struggled with being a single mum to Tiffany, Liam and Morgan as well as ward Whitney Dean (Shona McGarty), but after returning to EastEnders in 2008, she and Ricky re-married as part of the soap’s 25th Anniversary.

Between 2011 and 2012 Patsy took several breaks from the soap, as Bianca was sentenced to six months in prison for assaulting mum Carol’s lover Connor Stanley. 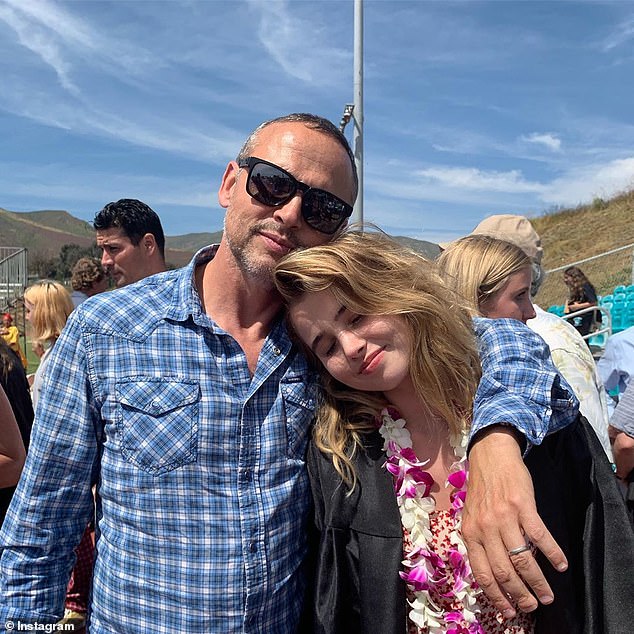 Smile! Richard was every inch the proud father as he cuddled his daughter at the ceremony 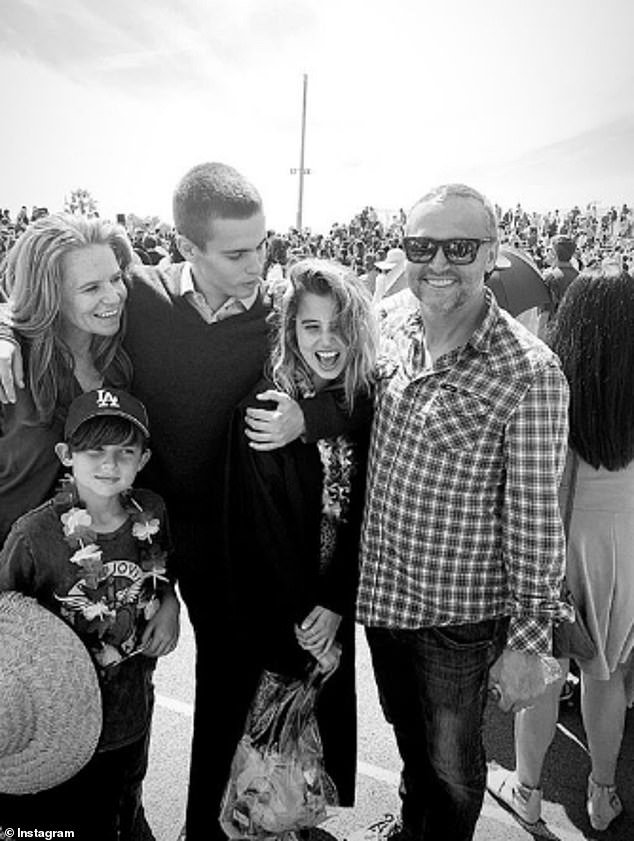 Elated: Another candid social media showed the joy being felt by the family, as Emilia said goodbye to her time at high school 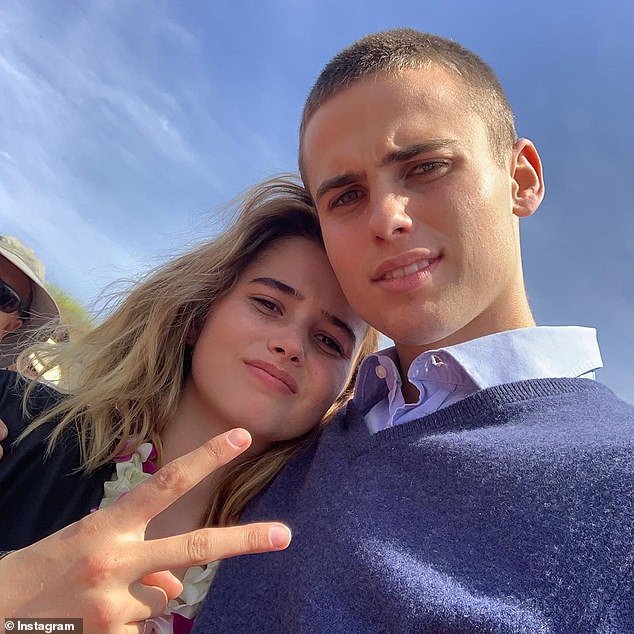 Close: Emilia also cuddled her other brother Fenton in one snap, as the family came together to celebrate the graduation 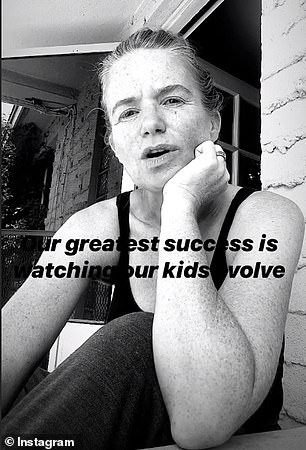 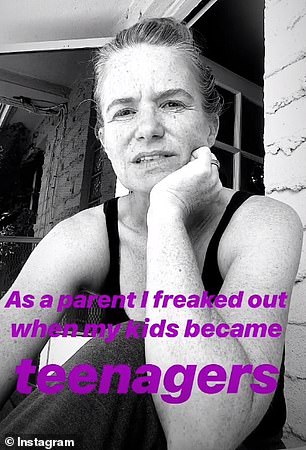 Open: A series of reflective videos also showed Patsy Palmer looked back at her years as a mum, as she prepared to see her daughter graduate

Patsy recently admitted she did not miss her acting career five years after saying goodbye to the character of Bianca, in a recent chat with Lorraine Kelly.

‘It was a little bit strange getting used to the idea you’re not ‘on show’ everywhere you walk about, you don’t have to be ready to speak to someone about EastEnders,’ the star said.

‘You can go out and just completely be yourself, it’s kind of weird, it is something you probably need therapy for, though I haven’t gone down that route since I’ve been here but everyone does.’ 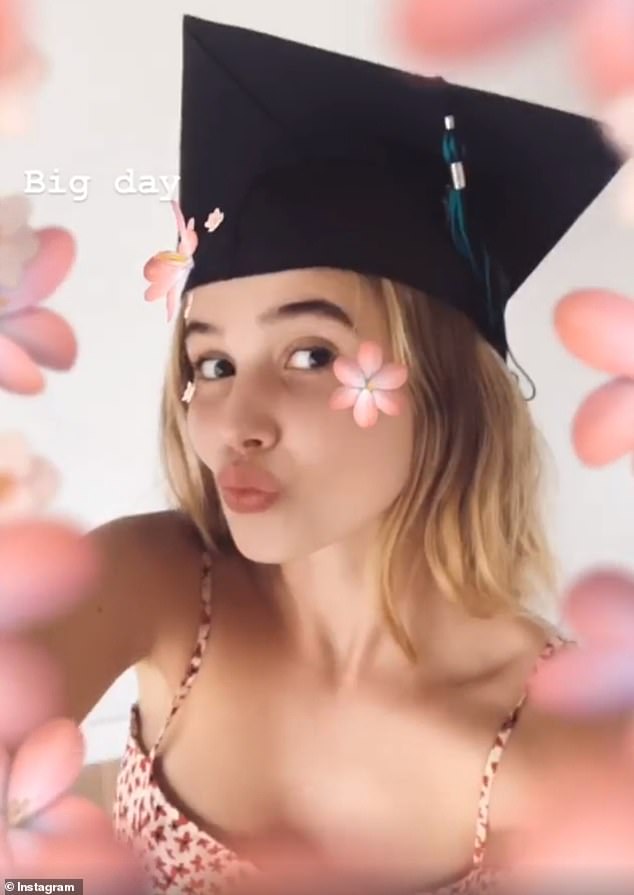 Cheeky: After the grand occasion, Emilia posted another proud selfie with her mortar board on her head