Taking to Instagram, The Inbetweers star, 31, shared a radiant selfie showing her reclining with a glass of wine and her pet dog Penny while Jack, 26, and Sasha shared identical snaps from their cosy night in.

Their respective nights in, come after the England footballer cruelly cut all contact with Emily by ‘ghosting’ her – suddenly ending all contact without explanation – and resuming his romance with his childhood sweetheart. 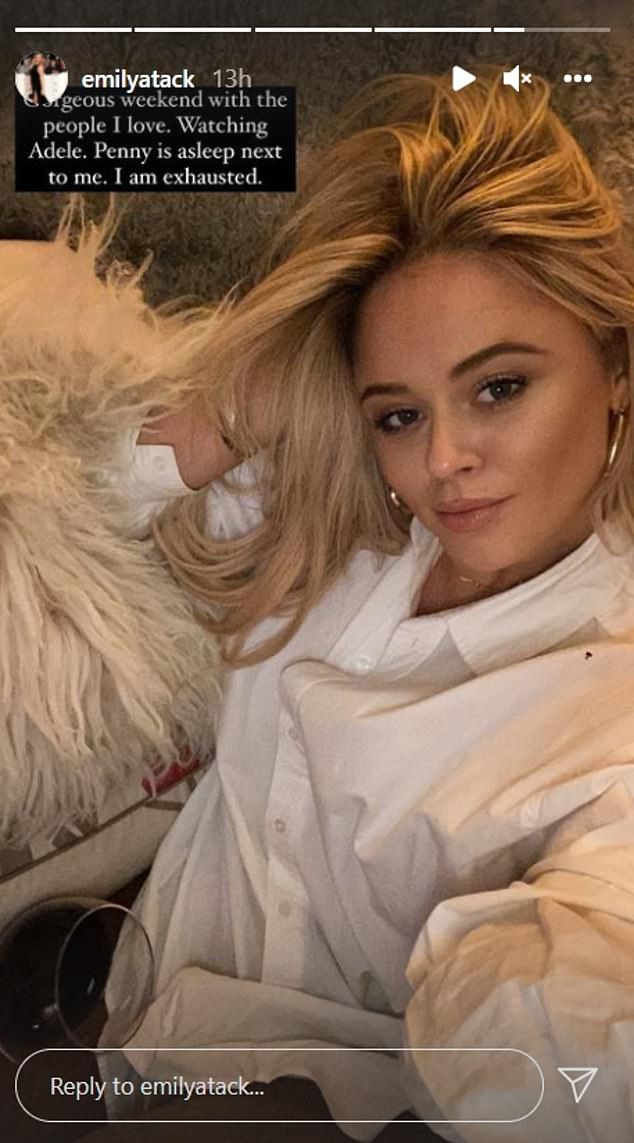 Emily was glowing in the snap as she posed in a crisp white shirt on her sofa and penned a caption reading: ‘Gorgeous weekend with the people I love. Watching Adele. Penny is asleep next to me. I am exhausted’.

She documented her weekend in detail, having been spotted on the town with her sister and also at her uncle’s 70th birthday bash.

Jack meanwhile shared an image of his TV, which sat above a stack of trendy coffee table books – which Sasha shared on her own stories.

Prior to the nights in, the England footballer, who is said to have become ‘besotted’ with Emily, decided that he wanted to stay with long-term girlfriend Sasha and is now – seemingly successfully – battling to save their relationship. 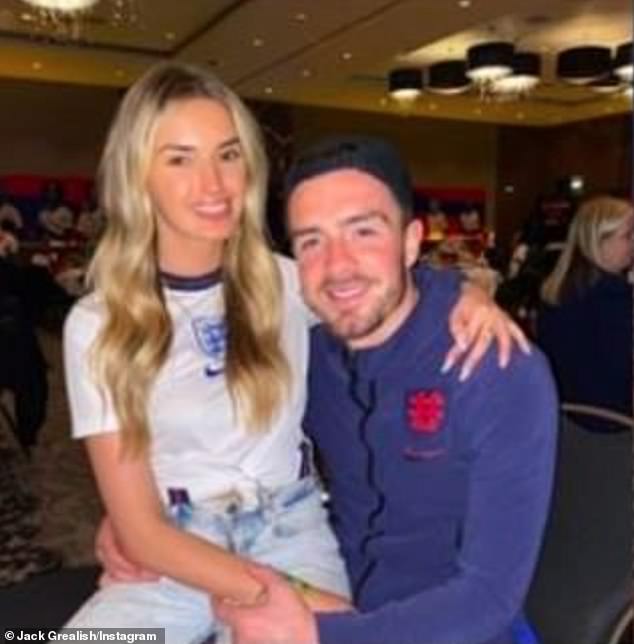 His love: Taking to Instagram, The Inbetweers star, 31, shared a radiant selfie showing her reclining with a glass of wine and her pet dog Penny while Jack, 26, and Sasha shared identical snaps from their cosy night in

Emily’s representatives declined to comment when contacted by MailOnline.

Yesterday, friends of Emily told how she hasn’t spoken to him or received any form of message in the eight days since a red-top tabloid revealed they had been on a string of dates together.

Emily was also ‘surprised’ to see that the sports star, who is paid £230,000 a week by Manchester City, had also been linked to Love Island contestant Amber Gill. One friend said: ‘Emily has heard nothing from him.’

Meanwhile, Sasha, a model who has dated Grealish for ten years, is still understood to be living with him in Manchester but is said to be ‘devastated’. 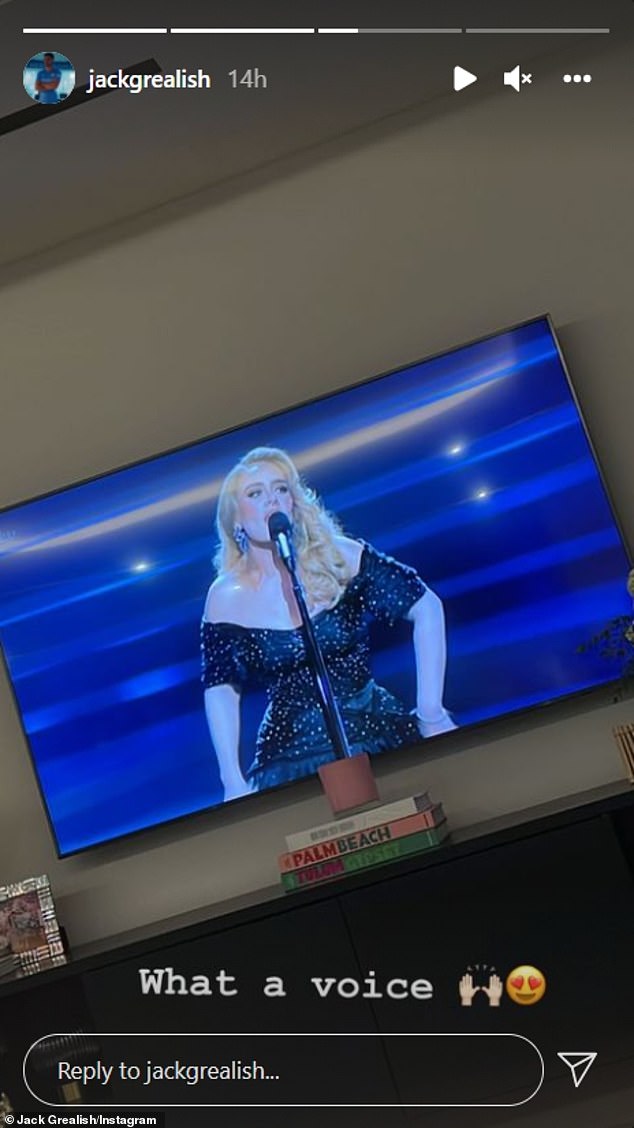 What a voice: Jack meanwhile shared an image of his TV, which sat above a stack of trendy coffee table books – which Sasha shared on her own stories

Despite friends urging her to dump her boyfriend, she has so far not done so, with sources speculating that it has not been an easy decision as she is so close to Grealish’s mum Karen and his 18-year-old sister.

The news that the footballer –Britain’s first £100 million player –has decided to calm his romantic adventures will come as a relief to his management, who are wary of him risking his lucrative off-field commercial opportunities.

For ‘Jack The Lad’ Grealish won a new fan base over the summer for his performances for England during the Euros. 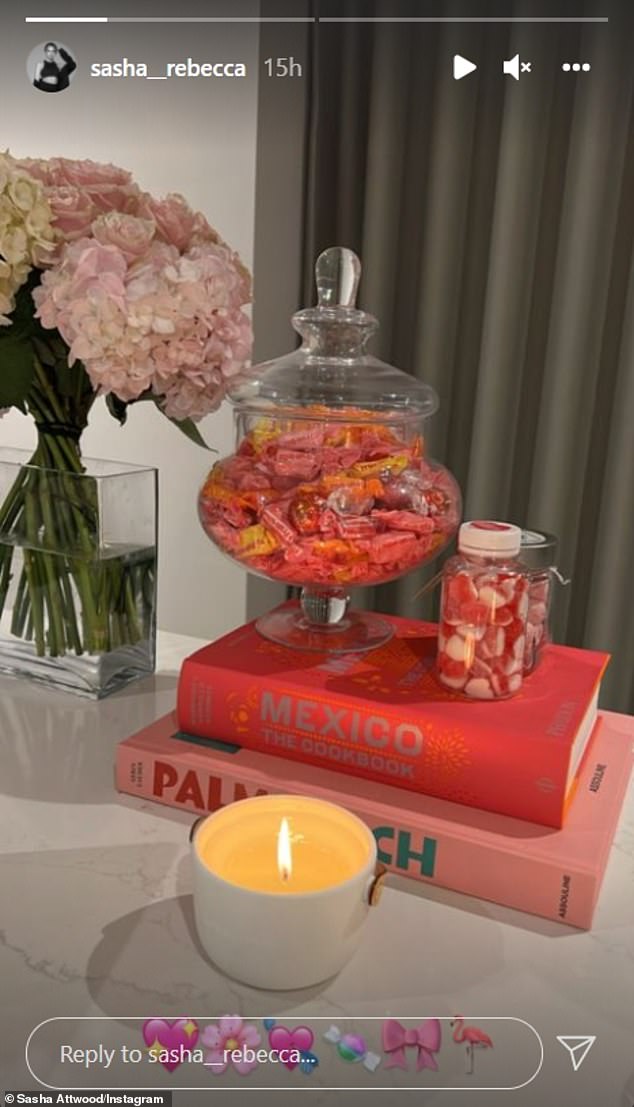 With his dashing style, cheeky persona and trademark headband – and especially his toned legs – Birmingham-born Grealish has become the guilty pleasure of many middle-aged women.

Among them is Radio 2 DJ Zoe Ball, 50, who has confessed that she had been caught ‘looking at Jack Grealish’s legs’ while on air.

An Instagram page set up by a 45-year-old superfan in honour of Grealish’s legs earlier this year now boasts almost 11,000 followers. 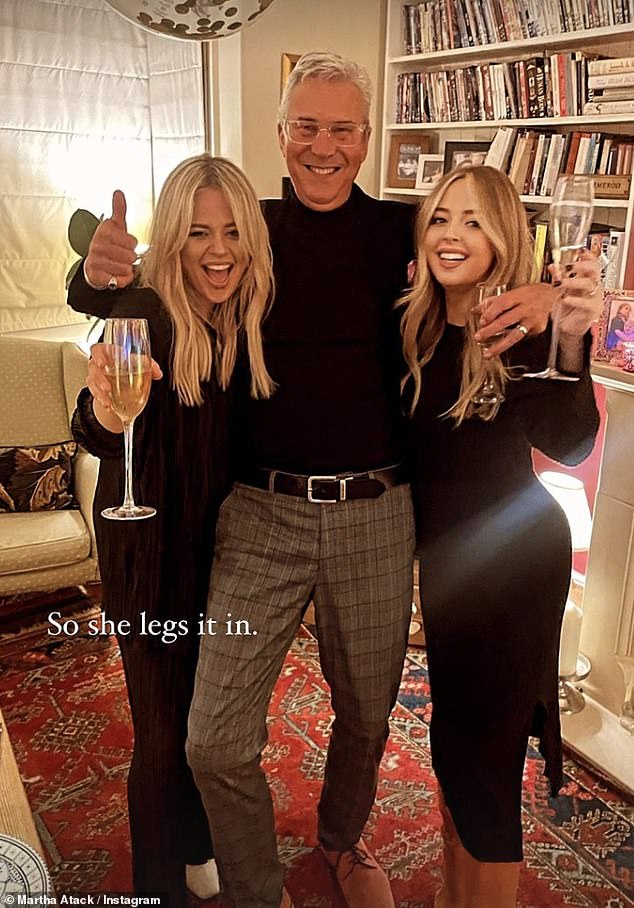 Party on: On Saturday, Emily continued to shrug off the drama as she partied with family at her uncle’s 70th birthday celebrations (Pictured with sister Martha)

Lucy, the woman behind the account, believes there is a sociological reason behind his appeal as he reminds women born in the 1970s and early 1980s of their time as teenagers – and the floppy-haired boys they dated at the time. Even his gaudy fashion sense helps evoke those memories.

She says: ‘He also oozes charisma. He is that cheeky little cute thing who is so passionate, but it is actually more than that.

‘For women around my age, Jack is nostalgic. He reminds me of every one of my boyfriends when I was a teenager. He is Wayne, Jason, Darren and Martin all rolled into one. 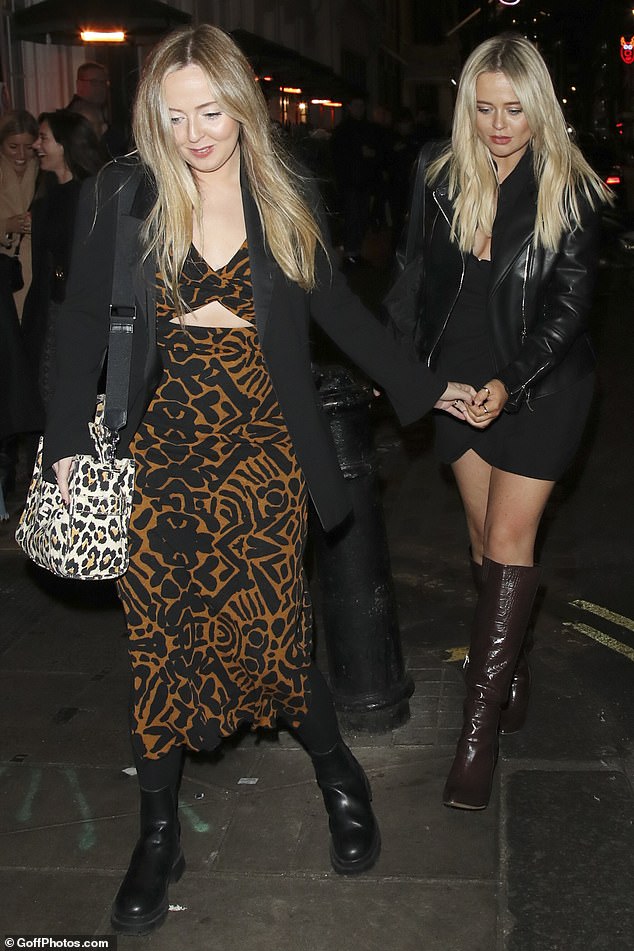 Textures: She strolled along in snakeskin embossed brown boots

‘Jack is a flashback to the 1990s – a time when I was young, slim and excited about life. He is from an era when I enjoyed life so much…

‘I was dating all of the time and the boys I was going out with were wearing Bermuda shorts and bucket hats, like Jack does. He reminds women my age of the good old days as he lives through the 1990s revival.’

Grealish’s appeal has been likened to that of the ultimate soccer heart-throb – David Beckham. But whether he can enjoy the same longevity will rely on his army of female fans continuing to see him as a adorable boy-next-door type – and not a ‘ghosting’ love-cheat.