Home » Celebrities » Family of Zombie Boy, 32, claim he accidentally fell to his death

Family of tattooed Lady Gaga muse Zombie Boy, 32, claim he accidentally fell to his death – despite police saying he killed himself

The family of tattooed Lady Gaga muse Zombie Boy believe his death after falling from the third floor balcony of his Montreal apartment on Wednesday was accidental, despite police saying he committed suicide.

Rick Genest, 32, who starred in Lady Gaga’s Born This Way music video, fell from the balcony at the rear of his home in Plateau-Mont-Royal after telling his girlfriend he was ‘going for a cigarette’. Medics could not revive him and he died at around 5pm.

His manager, speaking on behalf of the family, rejected official claims he deliberately jumped and instead claimed he fell accidentally. He said the balcony was ‘very dangerous’ with only a low rail as protection. 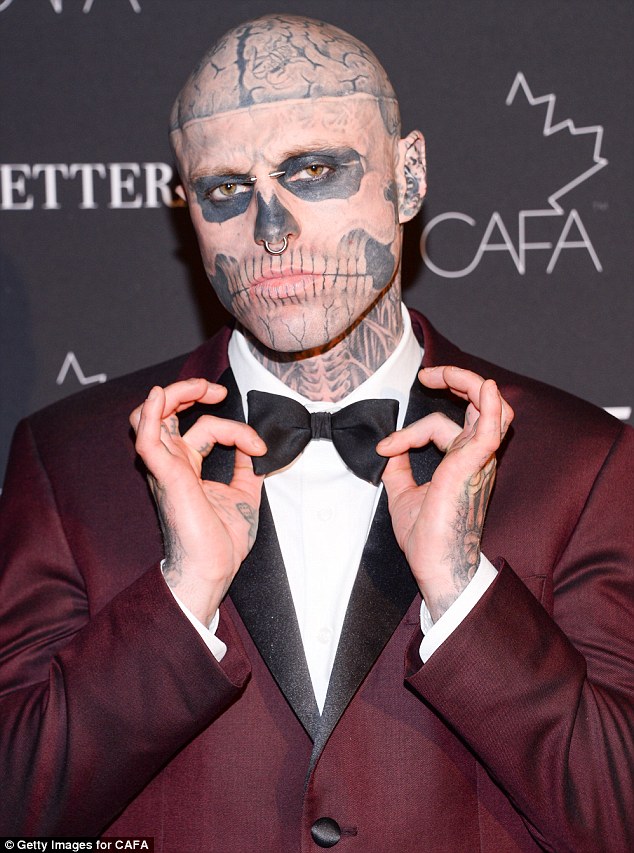 Rick Genest, 32, who starred in Lady Gaga’s Born This Way music video, fell from the balcony at the rear of his home in Plateau-Mont-Royal after telling his girlfriend he was ‘going for a cigarette’. He is pictured at a Toronto fashion show on April 20, 2018

Karim Leduc said there were too many ‘inconsistencies’ around his death to conclude it was suicide and criticized people who had rushed to that conclusion.

‘The balcony from which he fell on the third floor was a very dangerous balcony,’ he told People. ‘Just three weeks ago, I visited that balcony with him and was on it with him smoking a cigarette, as well.

‘It’s a balcony that has very small rails/guards — an emergency/fire escape balcony – and he was leaning his back towards it like sitting on the ledge of the rail, and he fell from his backside onto the floor.’

He also said Genest had not left a suicide note and had plans in his diary this week. 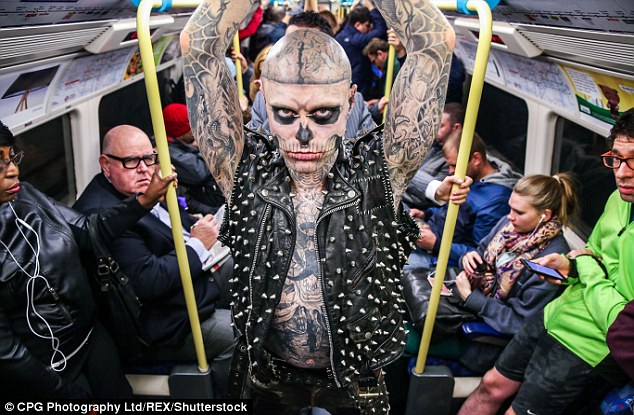 Genest’s manager, speaking on behalf of the family, rejected official claims he deliberately jumped and instead claimed he fell accidentally. He is pictured during a shoot on the London underground on October 5, 2016 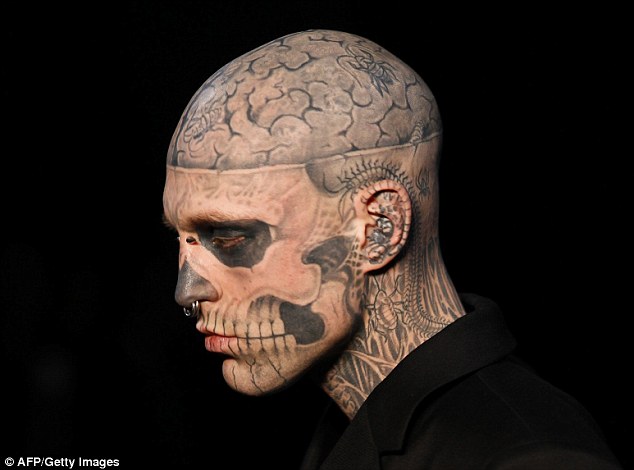 The manager said he received a ‘beautiful’ Facebook message from Genest on Wednesday morning ‘saying he appreciated our relationship’.

Leduc also gave more information about the events leading up to his client’s death.

He said Genest told his girlfriend he was going to the balcony to have a cigarette. When he did not return she went outside to check and found him lying on the floor at the foot of the building.

The model had not taken any drink or drugs before the fall, his manager claimed. 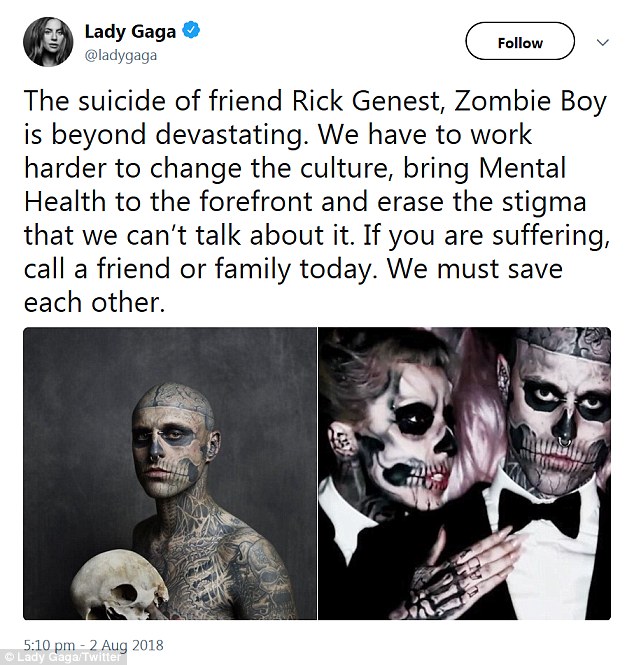 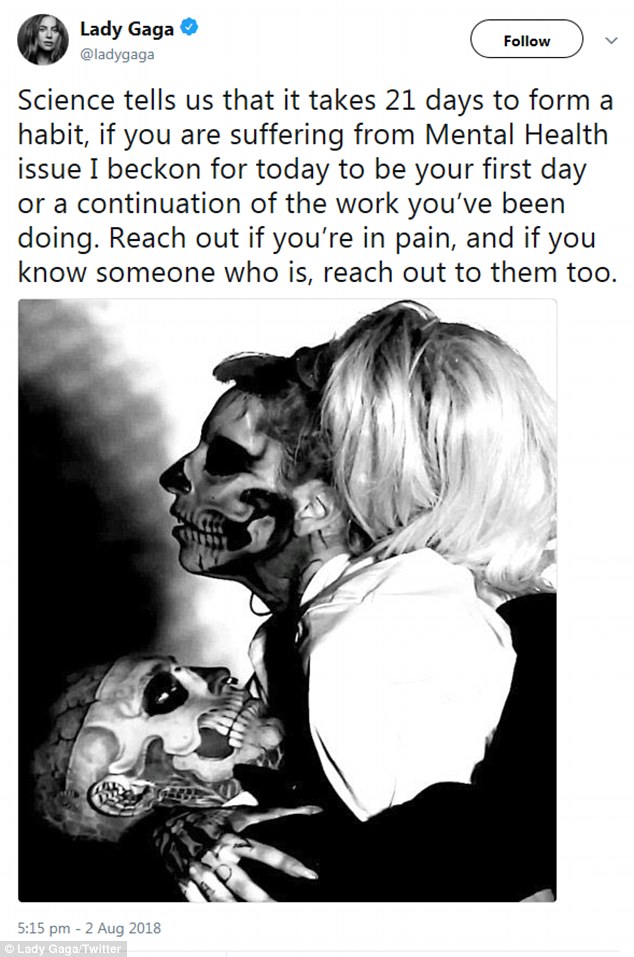 Lady Gaga wrote a touching Twitter tribute to her friend and collaborator on Thursday.

‘The suicide of friend Rick Genest, Zombie Boy is beyond devastating. We have to work harder to change the culture, bring Mental Health to the forefront and erase the stigma that we can’t talk about it,’ she wrote.

‘If you are suffering, call a friend or family today. We must save each other.’

She included a photo of Genest and herself from the Born This Way video in February 2011.

The singer added: ‘Science tells us that it takes 21 days to form a habit, if you are suffering from Mental Health issue I beckon for today to be your first day or a continuation of the work you’ve been doing. Reach out if you’re in pain, and if you know someone who is, reach out to them too.’ 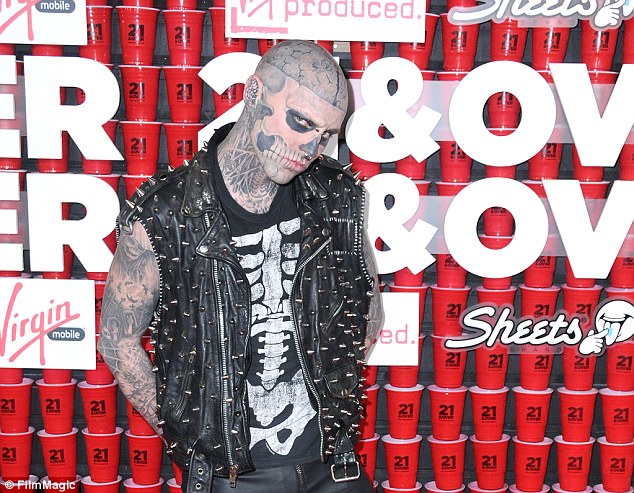 Genest started getting tattoos after recovering from brain surgery at the age of 16. He is pictured in LA in 2013 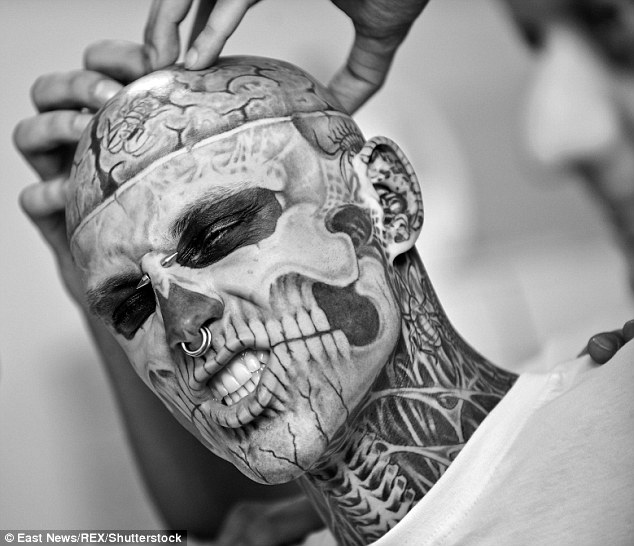 The Bad Romance singer also posted another tweet announcing a new partnership with her Born This Way Foundation to promote ‘kindness and mental health’.

‘Kindness and mental health aren’t one time practices. They aren’t just to do list items. This fall, in partnership with @btwfoundation, I’ll explore the power of habits to build cultures of kindness and wellness. Sign up to learn more,’ she posted.

The model became known as Zombie Boy for his numerous tattoos depicting the inside of his body on his skin.

The skin art included a tattoo of a brain outside his cranium.

Genest was featured in Mugler fashion shows in Paris and New York City in 2011 and later appeared in magazines such as GQ, Vanity Fair and Vogue Hommes.

The tattooed model appeared in a DermaBlend advert in 2011 in which he promotes the brand’s concealer and make-up remover. 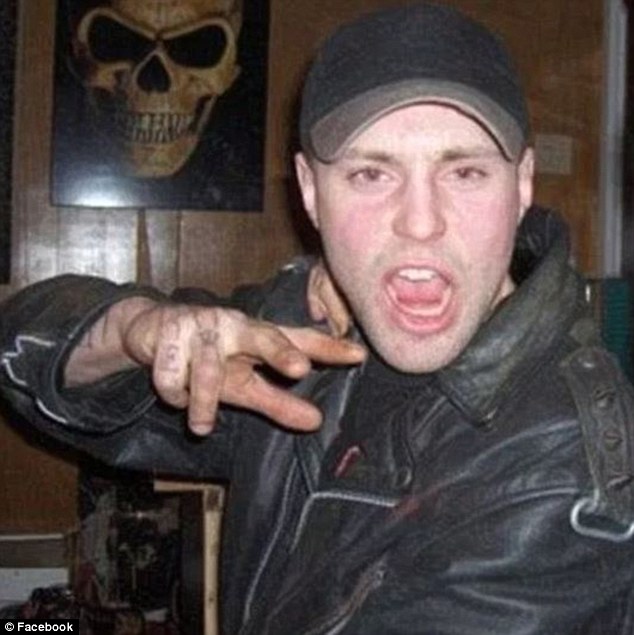 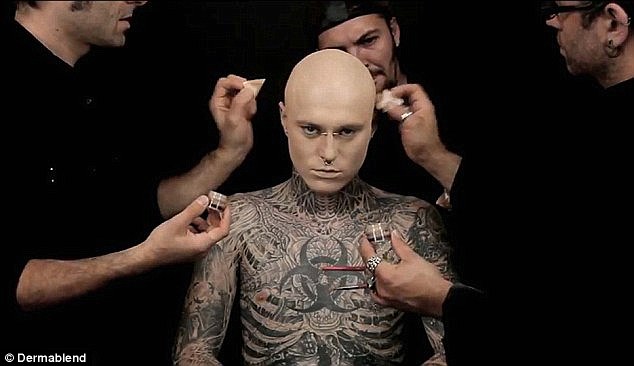 British artist Marc Quinn, 54, has been working on an 11.5-foot sculpture of Genest titled Self-Conscious Gene set to appear at the 2019 opening of the Medicine Galleries at the Science Museum in London.

Genest started getting tattoos after recovering from brain surgery at age 16 after being on a waiting list for six months. He was diagnosed with a brain tumor at 15.

Tattooist Frank Lewis, who was responsible for creating most of Genest’s inkings, paid tribute, writing: ‘R.I.P. my friend i feel like a little part of my soul has left with you, you’ll always be remembered you changed and inspired many lives, see you in the next one, till we meet again.’

Friends said he struggled with mental health issues throughout his life.