Home » Celebrities » FKA Twigs sues ex Shia LaBeouf, claiming in a lawsuit that he choked her and grabbed her ‘to the point of bruising’ 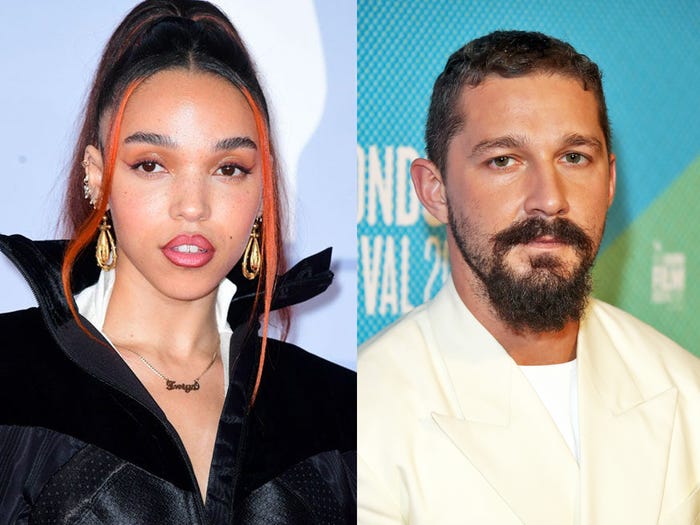 Artist FKA Twigs has filed a lawsuit against ex-boyfriend Shia LaBeouf, according to the New York Times, claiming there was a disturbing pattern of physical and emotional abuse over the course of their relationship that included LaBeouf throwing her against a car, choking her and enduring sleep deprivation.

The lawsuit, filed in Los Angeles County Court on Friday, was not available electronically at the time of publication. Insider has not seen the lawsuit, but requested it from FKA Twigs' representatives.

FKA Twigs costarred in LaBeouf's 2019 autobiographical film "Honey Boy," which details the actor's troubled childhood with his father and his later struggles with PTSD and addiction. The singer, whose non-stage name is Tahliah Debrett Barnett, and LaBeouf's relationship began in 2018, after the movie was filmed, and lasted just under a year.

In that time period, FKA told the Times that she experienced "relentless abuse," including LaBeouf knowingly giving her a sexually transmitted disease and grabbing her so hard that her skin bruised.

The lawsuit also reportedly claims LaBeouf kept a loaded firearm by the bed, which made the singer scared to get up at night in case he mistakenly shot her thinking she was an intruder. She also alleged that LaBeouf "didn't let her wear clothing to bed," according to the New York Times report.

Representatives for LaBeouf did not immediately respond to Insider's request for comment.

Still, LaBeouf, giving multiple statements to the Times, told the publication that he had "no excuses for my alcoholism or aggression, only rationalizations."

"I have been abusive to myself and everyone around me for years," LaBeouf told the Times via email. "I have a history of hurting the people closest to me. I'm ashamed of that history and am sorry to those I hurt."

When the Times presented LaBeouf with details of the claims both Barnett and a second ex-girlfriend, Karolyn Pho, had made against him in the suit, including that he head-butted Pho making her bleed, the actor said that "many of these allegations are not true."

Barnett's attorney Bryan Freedman said in a statement provided to Insider by the singer's representatives, "Shia LaBoeuf has abused Ms. Barnett, Ms. Pho and others. We tried to resolve this matter privately on the condition that Mr. LaBeouf agree to receive meaningful and consistent psychological treatment. Since he was unwilling to agree to get appropriate help, Ms. Barnett filed this suit to prevent others from unknowingly suffering similar abuse by him."

FKA Twigs told the Times that she decided to sue LaBeouf to help show how abusive relationship cycles can impact anybody.

"I'd like to be able to raise awareness on the tactics that abusers use to control you and take away your agency," FKA Twigs told the Times.

FKA says she eventually left the relationship thanks to a therapist who helped the singer strategize her exit. It took "several attempts" before she was able to leave their shared house in Los Angeles and return to her own home in London, according to the singer.

"The whole time I was with him, I could have bought myself a business-flight plane ticket back to my four-story townhouse [in London]," FKA Twigs told the Times. "He brought me so low, below myself, that the idea of leaving him and having to work myself back up just seemed impossible."

The singer told the Times she plans to donate a "significant" part of any money she may receive in damages to domestic-violence charities.

This isn't the first time LeBeouf has been in trouble with the law. In 2014, he was arrested outside of Studio 54 in New York City, later pleading guilty to disorderly conduct and being sentenced to alcohol-abuse treatment. Three years later, he was arrested and charged with disorderly conduct, public drunkeness and obstruction of justice for an incident in New York. Those charges were later dropped.

Read the full report at the New York Times.