Floyd Mayweather appeared to be in good spirits as he draped an arm around his ex Gallienne Nabila while out in New York City on Tuesday.

The boxer, 44, sported a Louis Vuitton jacket for the walk while the model put on a busty display in a plunging snake-print top and also donned a large diamond ring.

As the duo were pictured together on 5th Avenue, Floyd’s stripper girlfriend Anna Monroe, 29, was 2,500 miles away hiking at Red Rock Canyon in Las Vegas. 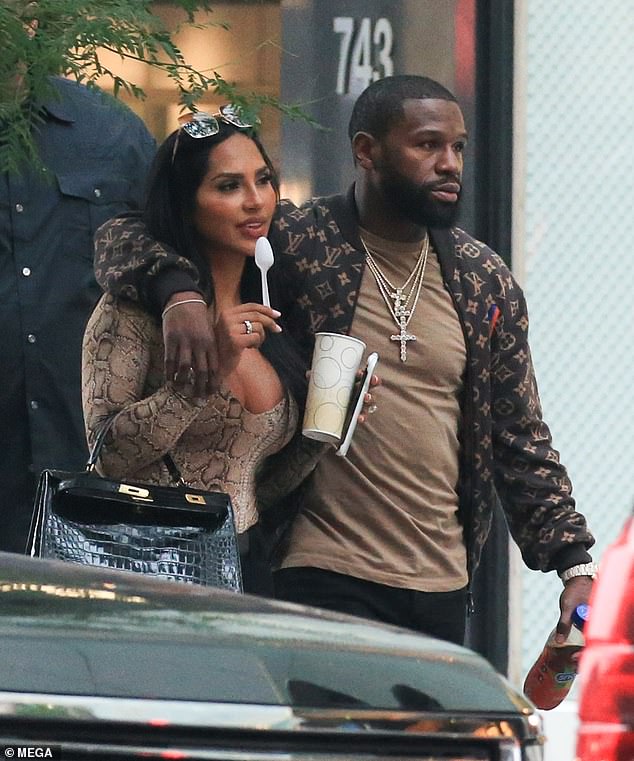 Catching up? Floyd Mayweather appeared to be in good spirits as he draped an arm around his ex Gallienne Nabila while out in New York City on Tuesday 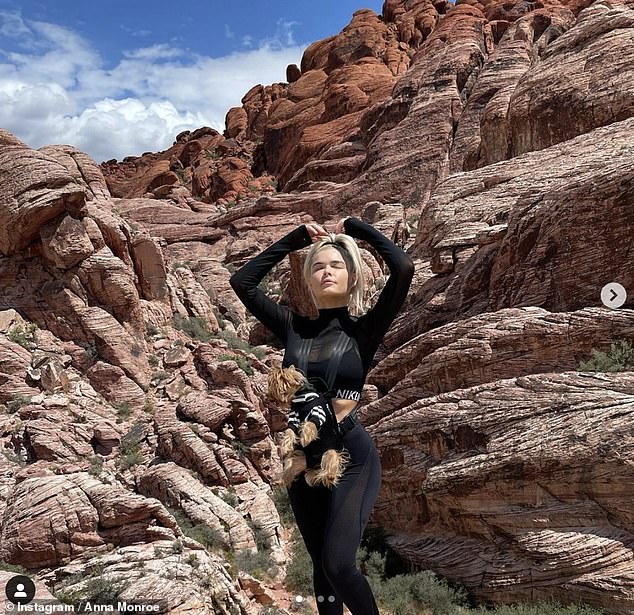 Floyd kept things casual for the outing, donning a tan T-shirt under his designer jacket which he paired with black jeans and trainers.

Gallienne, who dated the star in 2019, co-ordinated with the boxing champ in black skinny jeans and completed her look with a black handbag and strappy heels.

The brunette beauty looked relaxed as she walked along the road with Floyd’s arm around her and tucked into a cold snack. 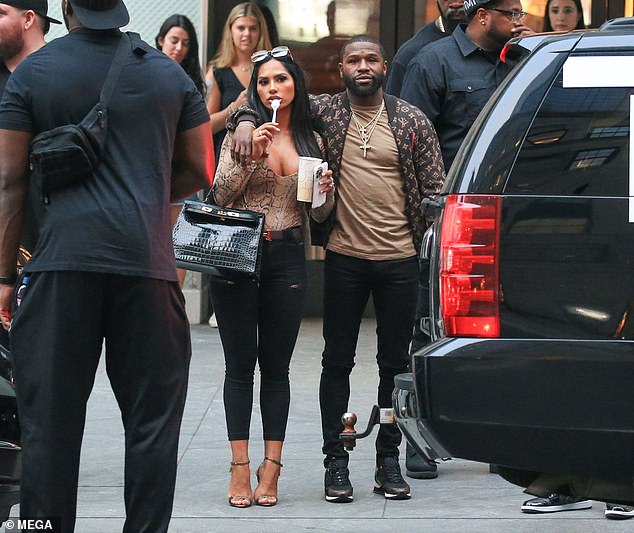 Strolling: The boxer, 44, and model, who dated in 2019, looked relaxed as they walked along 5th Avenue

According to The Sun, the former flames later got into one of his three SUV’s before heading off.

It comes as Floyd’s girlfriend Anna soaked up a bit of sightseeing in Las Vegas and went hiking at Red Rock Canyon.

She shared a sizzling snap to Instagram showing herself posing up a storm in figure-hugging black gym gear and wearing her dog on her front. 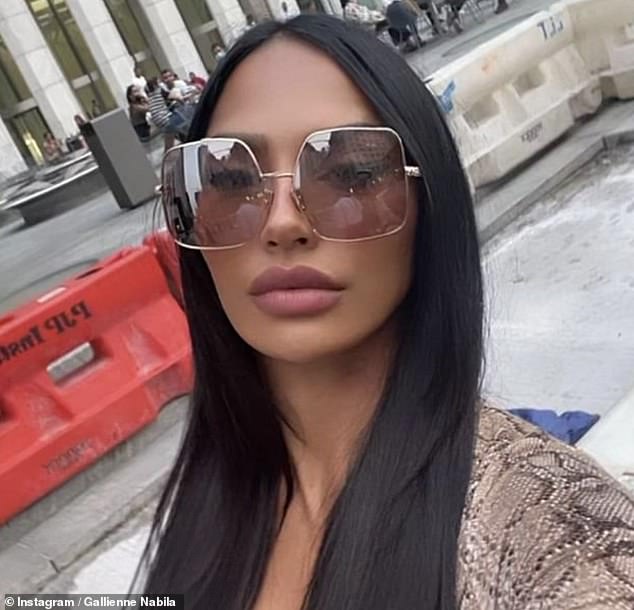 In May it was reported that Floyd had told Anna to leave his multi-million pound Vegas mansion while he knuckled down to prepare for his fight with YouTuber Logan Paul.

The star was said to be have asked Anna – lead dancer at his Las Vegas club Girl Collection – to get off the scene while he worked off the ring rust and prepared to return from retirement once again, according to The Sun.

At the time, Floyd’s last professional fight had been in 2017 when he beat UFC star Conor McGregor in a £215m bout.

While in January, Floyd denied reports he’d gotten engaged to Anna as he shared a strongly worded post to Instagram stating: ‘I have never been engaged or married’. 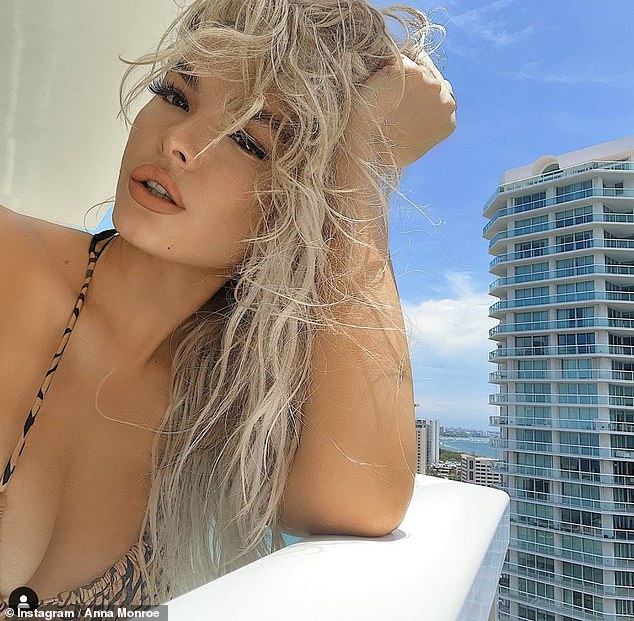 Couple: Anna and Floyd are thought to have been linked since 2018 after she shared snaps of them together in Athens, Greece (the stripper is pictured in June)

It had been claimed by The Sun, that he popped the question to his stripper love just weeks after their romance first came to light.

Anna had done little to squash reports as she had shared a picture of a huge diamond ring worn on her wedding finger on her Instagram page.

However Floyd made things very clear in his Instagram post, which read: ‘I’m not engaged and have never been engaged or married, those are just rumours and lies.’

It was reported that the boxer and stripper had taken things to the next level over the weekend, with him not wanting the news to be made public. 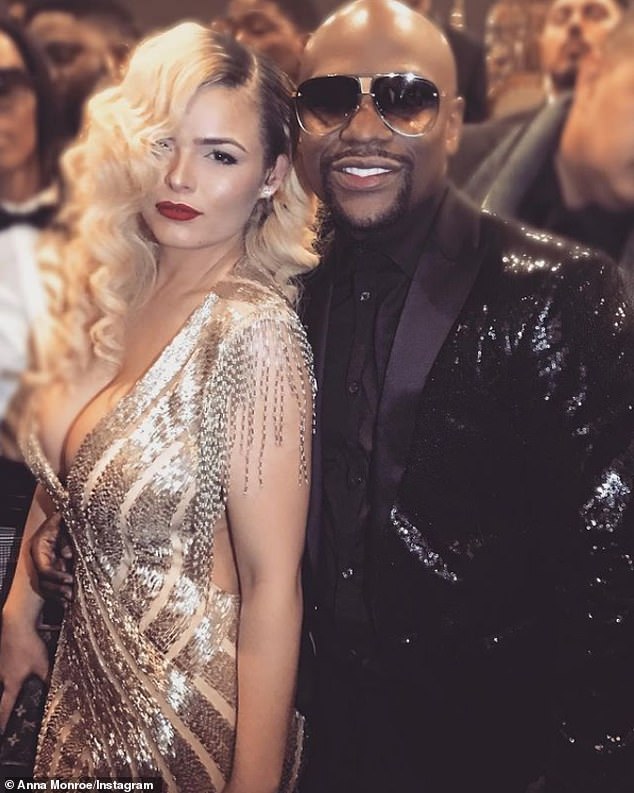 Denial: In January, the boxer denied claims that he had popped the question and was engaged to Anna (pictured together) 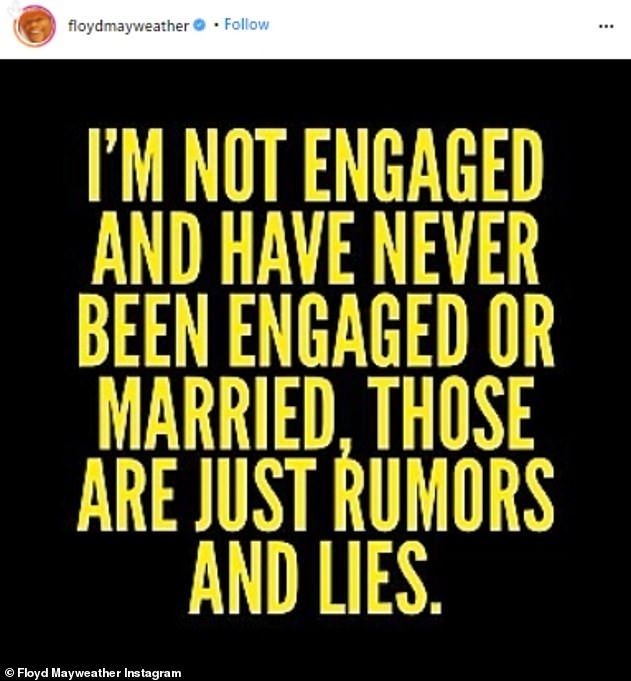 A source told the publication: ‘Floyd was annoyed at first that news of their relationship broke because he wanted to keep it private. They had an argument about it but soon made up.

‘And then he decided to pop the question on Saturday, Anna has told family and friends she’s getting married and wants to have a baby with Floyd this year.’

The source added: ‘Her family and friends have had their concerns about the relationship but she’s an adult, it’s her decision and they want her to be happy.’

Floyd is believed to have been seeing Anna for months before they went public with their relationship on New Year’s Day. 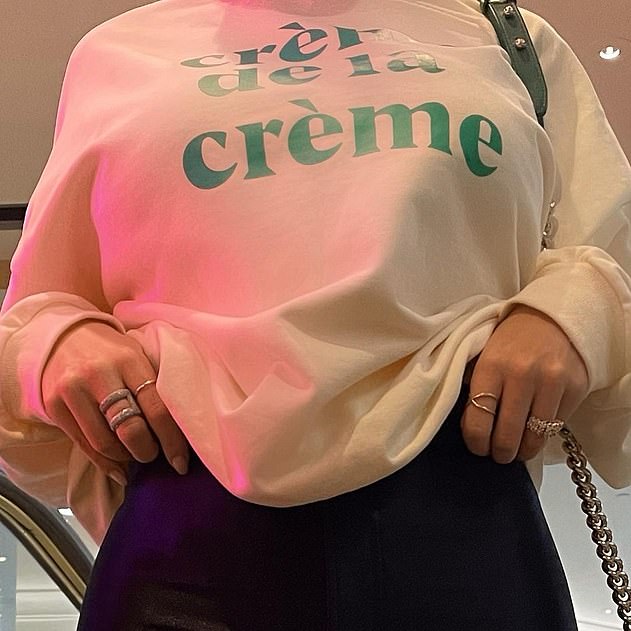 Dazzling: However Anna did little to squash reports at the time as she shared a picture of a huge diamond ring worn on her wedding finger on her Instagram page

They reportedly shared their news with family and friends over FaceTime.

In October 2018 Anna shared snaps of herself and Floyd on holiday together in Athens, Greece, as they visited the Acropolis.

It is claimed that the couple have been together ‘on and off’ for a while, and have previously shared photos of themselves at the exact same locations at the same time in Paris, France; Abu Dhabi, UAE; the Blue Lagoon spa in Iceland; Santorini, Greece and Amsterdam, Holland.

The couple, who met at Floyd’s club Girl Collection, are reportedly planning a baby after the sports star decided he would like Anna to have his child.

Anna, who was born in America but brought up in England, was apparently initially declined when she applied for the job at the club.

According to the Sun she passed Floyd in the corridor on her way out and the following day was asked to return, where she was met by Floyd and a candlelit dinner – before he told her she was now the lead girl. 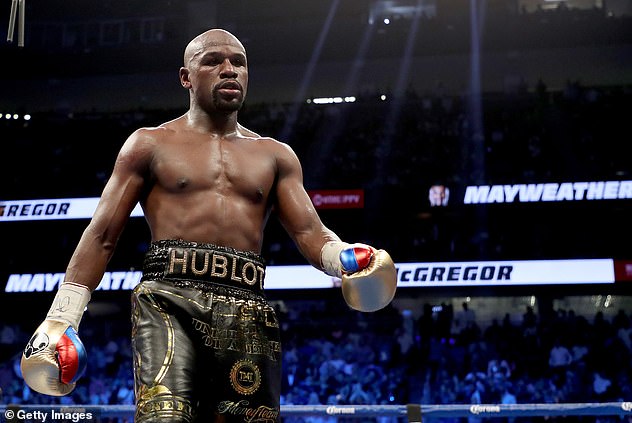 In the zone: In May it was reported that Floyd had told Anna to leave his Vegas mansion while he prepared for his fight with Logan Paul (pictured at his Conor McGregor match in 2017)