Gazza, 54, shows off his unique tattoos as he works up a sweat in swimming trunks on Italian I’m A Celebrity – after vowing to win the show in honour of his late nephew

He’s seven days into his stint on Italy’s version of I’m A Celebrity – L’Isola dei Famosi.

And Paul Gascoigne, 53, joined his camp-mates in a team workout on Monday, stripping down to a pair of red and navy swimming trunks as he worked up a sweat with his unique inkings on full display.

The sporting legend powered through a round of seated push-ups with the aid of a tree trunk, also taking part in a group stretch and a brisk stroll along the ocean’s edge with Beppe Braida, 57. 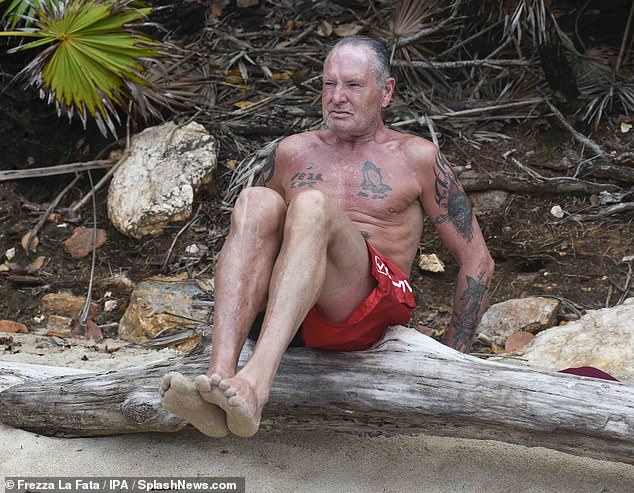 Keeping fit: Paul Gascoigne, 53, joined his camp-mates in a team workout on Monday, stripping to a pair of swimming trunks on Italy’s version of I’m A Celebrity – L’Isola dei Famosi

The father-of-three also took a moment for himself, appearing deep in thought as he sat separately from the group on branch.

Keeping the seafront chill at bay, Gazza wrapped up in a panelled windbreaker as he glanced over at his co-stars, who stood in a circle facing one another.

In a new interview, Paul’s sister Anna, 54, Anna revealed the football legend vows to win Italy’s I’m A Celeb in honour of his late nephew and will donate the show’s £50,000 prize money to his mental health charity.

She also credited him for saving her life after her son Jay passed away aged 22 from an accidental self-medicated drug overdose in April 2016. 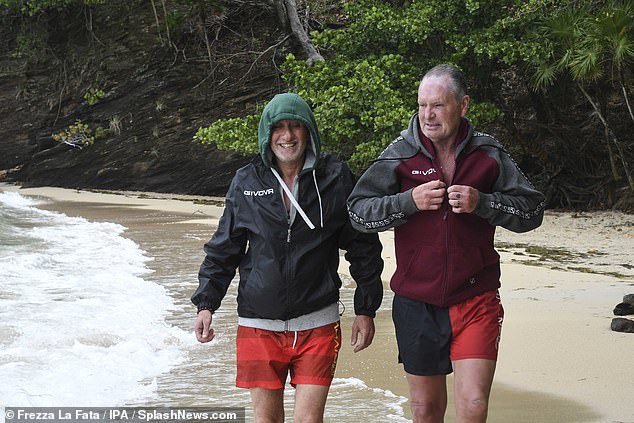 All smiles: The sporting legend powered through a round of seated push-ups with the aid of a tree trunk, also taking part in a brisk stroll along the ocean’s edge with Beppe Braida, 57 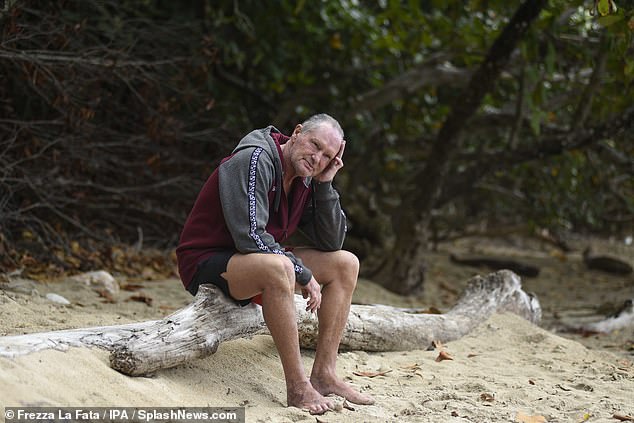 Pensive: The father-of-three also took a moment for himself, appearing deep in thought as he sat separately from the group on a branch

The charity worker said: ‘I was calm and methodical – I wrote my will and put in a letter what I wanted for my funeral.

‘Paul has spoken of his own battles and I was suicidal after Jay died. Paul and our mum pulled me back from the brink.’

Gazza’s older sibling recalled how she wanted to ‘look after’ Jay and insisted on ensuring her 25-year-old daughter ‘would be fine’.

Anna said she was ‘stopped’ from taking her life after the ex-sports manager pointed out that Harley ‘wouldn’t be far behind her’, following the loss of her brother, as well as her grandfather John – who died from cancer two years later. 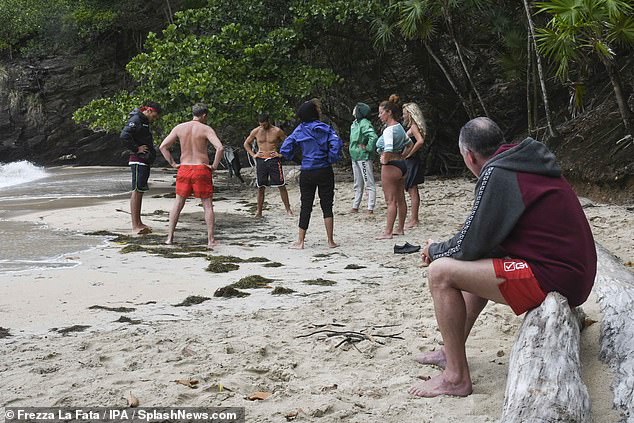 Looking on: The footballing legend glanced over at his co-stars, who stood in a circle facing one another

The mental health campaigner told The Sun on Sunday: ‘When Jay died, my life had become like a nuclear winter. The loss you feel when a child dies needlessly cannot be put into words. [Then] losing dad, after everything else, was the cruellest blow.’

Meanwhile, Gazza left one of his co-stars horrified over the weekend when he revealed he likes pineapple on his pizza.

The football legend confessed: ‘My favourite is ham and pineapple pizza. It’s delicious. You can’t beat it. It’s the best.’

Despite his enthusiasm on the matter, his other camp-mates in Honduras’ Cayo Cochinos islands appeared far from impressed by his gastronomical preferences. 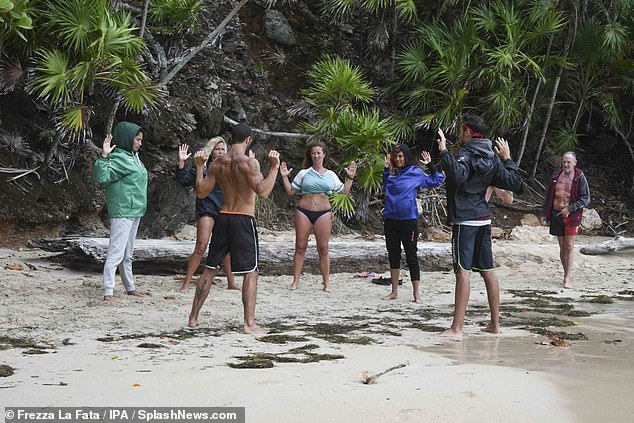 Stretching out: The L’Isola dei Famosi campmates appeared to take part in a group stretch before more strenuous exercise 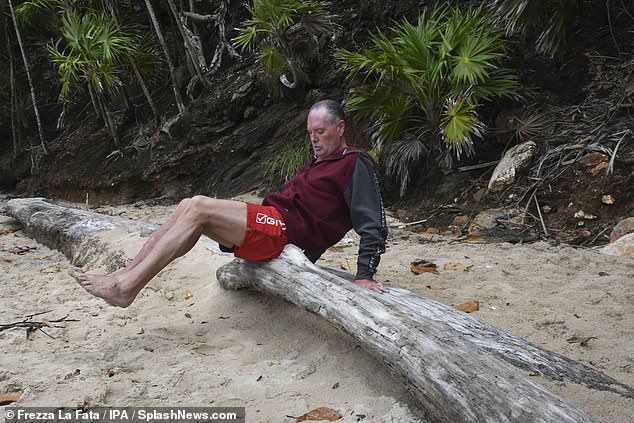 Inventive: Gazza balanced on a tree trunk as he worked on his core muscles in a pair of swimming trunks and a rain coat

YouTuber Awed – who hails from Naples, where pizza was invented – responded: ‘You do what? Mamma mia! That’s disgusting. Pizza is a savoury dish, you put savoury toppings on it, not a sweet topping. Yuck!’

However, the British sportsman, who is through to the second week of the two-month show, stood his ground, as he insisted: ‘No, no, you’re wrong. It’s delicious!’

During the show’s live opening last week, Gazza made quite the impression during his introductory video, before launching himself out of a helicopter.

Gazza, who spent three years at Rome’s club Lazio, did his best at speaking the language but left viewers in fits of giggles when he misunderstood host Ilary Blasi.

Paul was getting stuck into his filming duties for the first live episode as they shot scenes on a remote island, yet his garbled intro stole the show.

In the interview, Gascoigne was asked about his Italian, to which he said in his strong Geordie accent: ‘It’s OK. It’s only the first day, I’m hoping to improve it.’

He conceded: ‘I’m not speaking perfect Italian’, before beginning his diatribe, in which he bizarrely repeatedly used the word for snakes.

When asked what he was looking forward to, he attempted: ‘serpente’ (snakes), before stating in Italian: ‘Fishing good me, very good me. 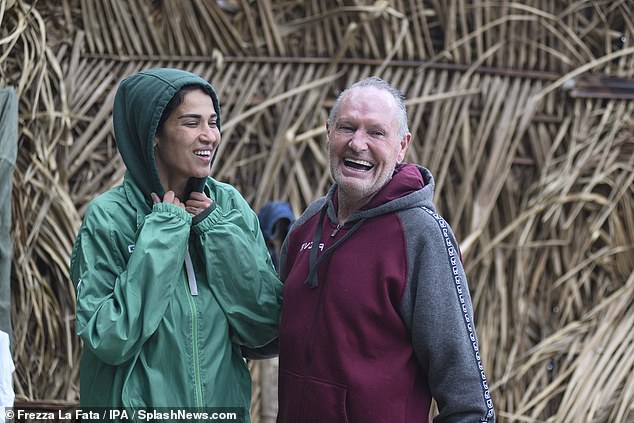 Growing close: The superstar footballer seems to have struck up a friendship with actress Francesca Lodo, 38, during his time on the show

Paul had been studying Italian as he waited to fly out to the island.

A source previously told The Sun: ‘Paul has a basic grasp of Italian and he can make himself understood…

‘But what we really want to avoid is having subtitles too often as that would ruin it.

‘The idea is to get him up to a good conversational level so he can talk with the other competitors. We are expecting some exciting TV from Paul.’ 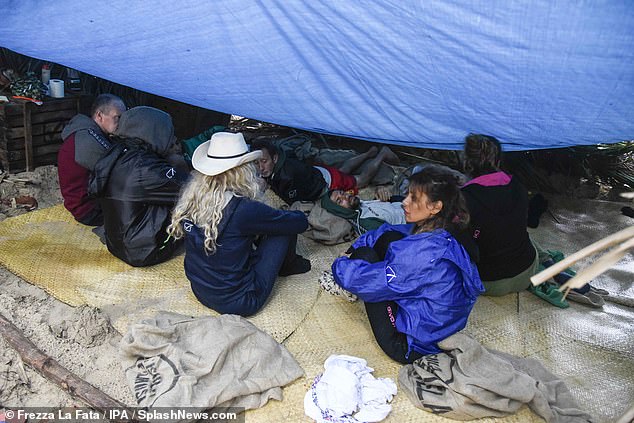 Taking cover: L’Isola dei Famosi contestants were seen sitting beneath blue tarpaulin, with some propping themselves up on rucksacks 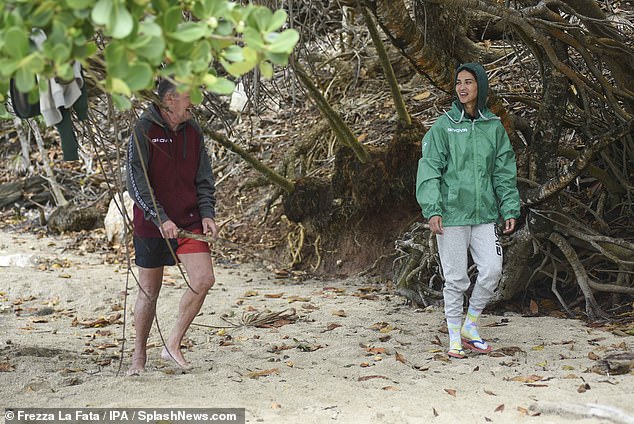 Friends: Gazza and Francesca broke away from the group for a stroll, with the superstar footballer walking bare foot in the sand

Paul had also spoken to the publication in his native tongue about his strengths and what he will bring to camp.

Asked what he can offer his 14 fellow campers, Paul said: ‘I’m good at fishing,’ before adding: ‘My best quality is that I can make people laugh and I’m always laughing.’

A source said: ‘Paul is in top form. He told producers he has spent lockdown in England keeping fit by running and cycling, and it’s certainly paid off.

‘He looks phenomenal and has a physique any man half his age would be proud of.’

The former footballer made a dramatic debut as he arrived via a helicopter and had to jump into the ocean from a height and swim to the island. 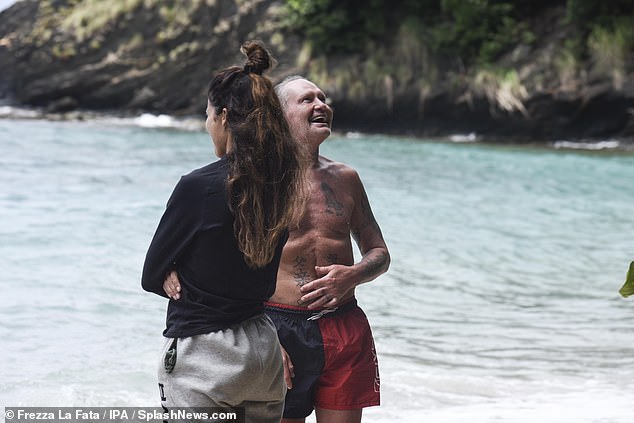 Funny lady: Italian actress Francesca had  Gazza laughing and clutching his belly as she looked out to sea 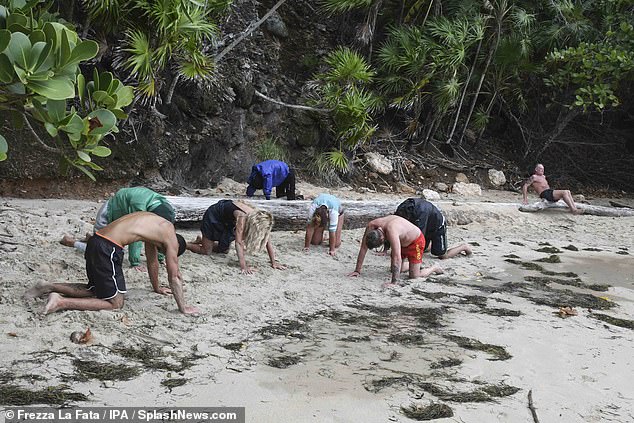 Solo: While contestants on Italy’s I’m A Celebrity stretched together in the sand, Gazza (top right) took it upon himself to find a tree trunk and get stuck into push-ups

Paul appears to have already struck up a friendship with Italian actor Gilles, 38, as they were seen hugging on the beach after their dramatic arrivals.

The former footballer went shirtless in a pair of black swimming shorts for the arrival, where he showed off a collection of his tattoos. 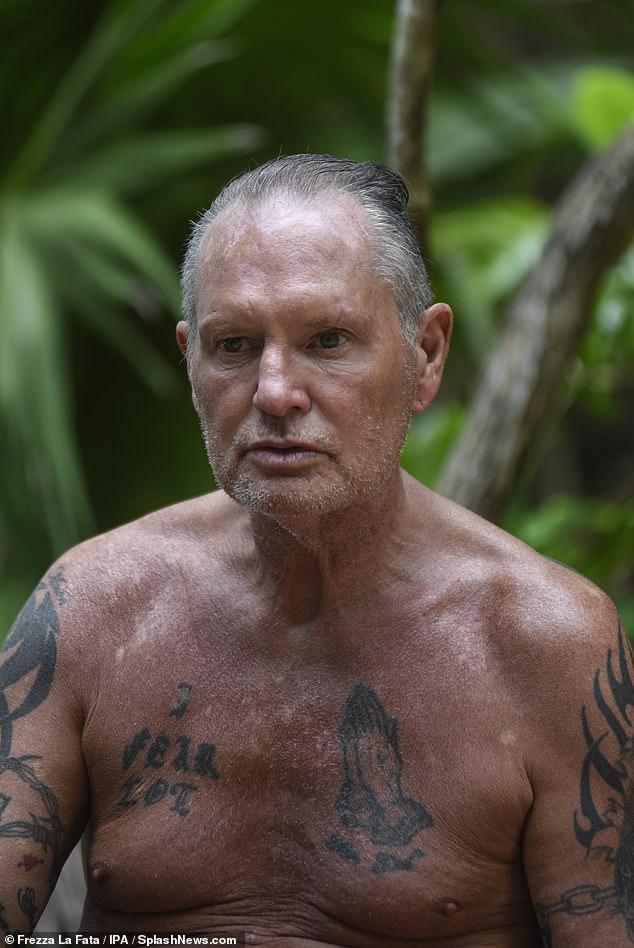 Ink: Paul famously visited a tattoo parlour five days in a row in 2013 as he underwent a series of inkings, including daughter Bianca’s face, at Bournemouth Ink studio

Paul famously visited a tattoo parlour five days in a row in 2013 as he underwent a series of inkings, including daughter Bianca’s face, at Bournemouth Ink studio.

The former England star has previously said that he had turned to tattoos as a way of battling his alcohol addiction.

The star, who passed a series of mental and physical tests for the show, recently claimed he was banned from joining the cast of I’m A Celebrity… Get Me Out Here! after failing a psych test back in 2009.

He insisted that producers ‘pre-judged him’ meaning he failed the tests. 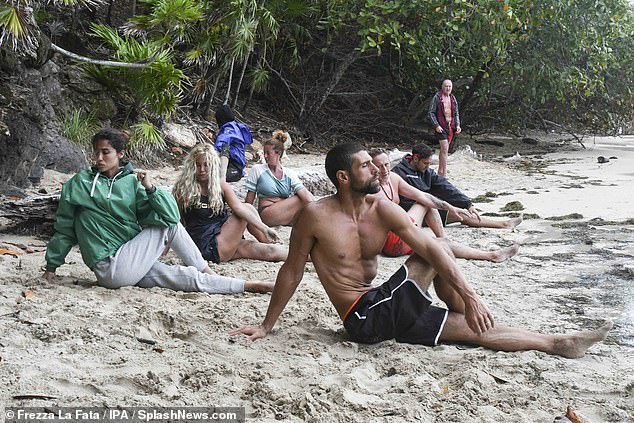 Stretching: Gazza watched on as his teammates performed a series of stretches while sitting in the sand