They’re expecting their first child together in a few months’ time.

And Gorka Marquez, 28, took to Instagram to share a sweet snap as he kissed pregnant girlfriend Gemma Atkinson’s bump on Saturday.

He wrote: ‘I’ve Loved being able to drive home every night this week after each show and be able to do one of my favourite things, just chill in bed and chat to @glouiseatkinson and stare at her bump and see baby marquez kicking her and wriggling everywhere… 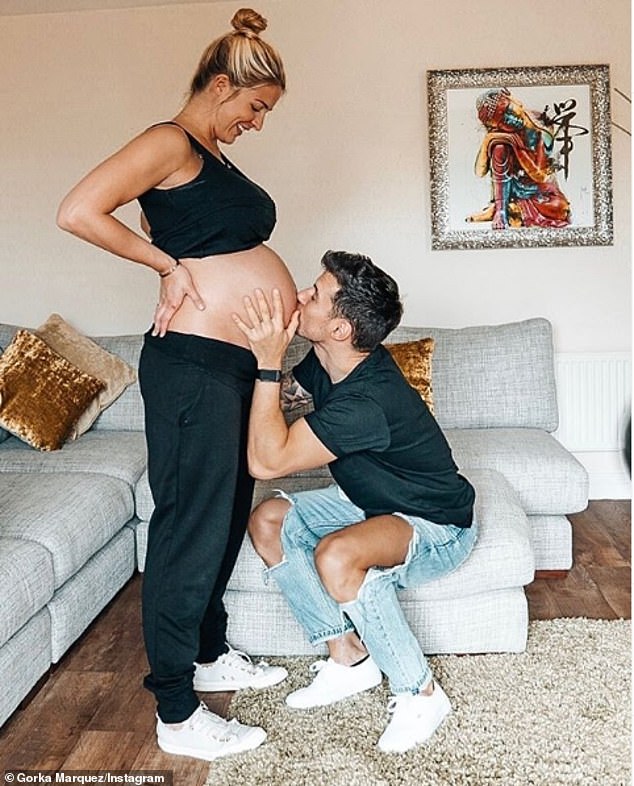 ‘Can’t wait to finally kiss you and have you in my arms’.

‘In your arms and out of my belly sounds wonderful. Be nice to not have a human head in my pelvis… I love you,’ she wrote.

The sweet photo comes a few days after the radio presenter posted a snap as she announced that she was going on maternity leave next week.

She said: ‘It’s almost time for me to finish work for my maternity leave and take on my new role as being a mum! 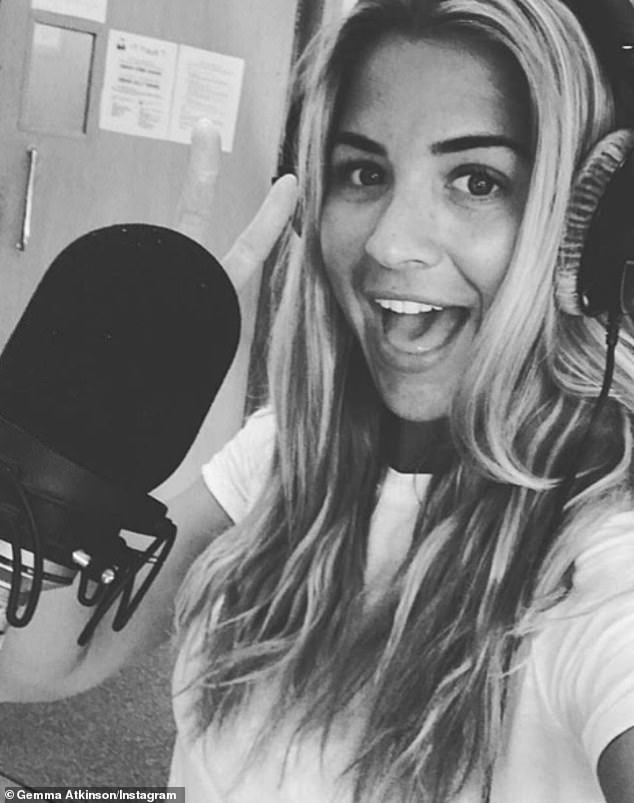 7 months: Pregnant Gemma is about to embark on her maternity leave 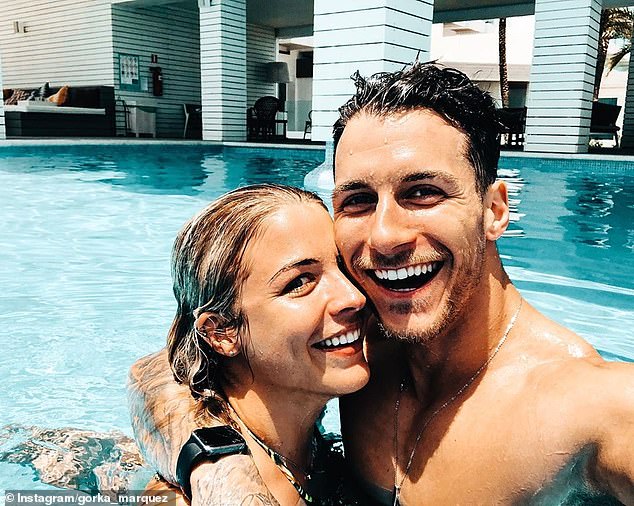 Mum and Dad-to-be: The presenter, 34, is expecting a baby with Gorka in two months’ time

‘I’ll be hanging up my headphones on Friday 7th June, but not for too long as I’ll be returning to @hitsradiouk on a brand new drivetime show with the wonderful @wesbutters.

‘I figured being woken up by a baby throughout the night will leave me in no fit state to wake you guys up at breakfast. So instead, I’ll be getting you all home from work weekdays with Wes 4pm – 7pm. 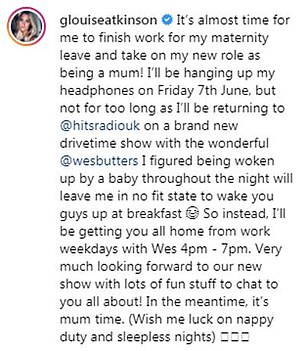 Signing off: ‘It’s almost time for me to finish work for my maternity leave and take on my new role as being a mum,’ wrote Gemma

‘Very much looking forward to our new show with lots of fun stuff to chat to you all about! In the meantime, it’s mum time.

‘(Wish me luck on nappy duty and sleepless nights)’.

Her boyfriend Gorka replied to the post with: ‘So Proud of you’mmm.’

The couple had to bat away rumours they had become engaged last weekend, when fans began commenting on diamond ring Gemma was flashing around.

A flurry of fans questioned whether the star had got engaged by simply asking beneath the post: ‘Engaged?’

Others had a different tact as they complimented the glittering jewel on Gemma’s finger by remarking it was ‘beautiful’ and a ‘whopper of a ring’.

A representative for Gemma denied the claims she was engaged to The Mirror. 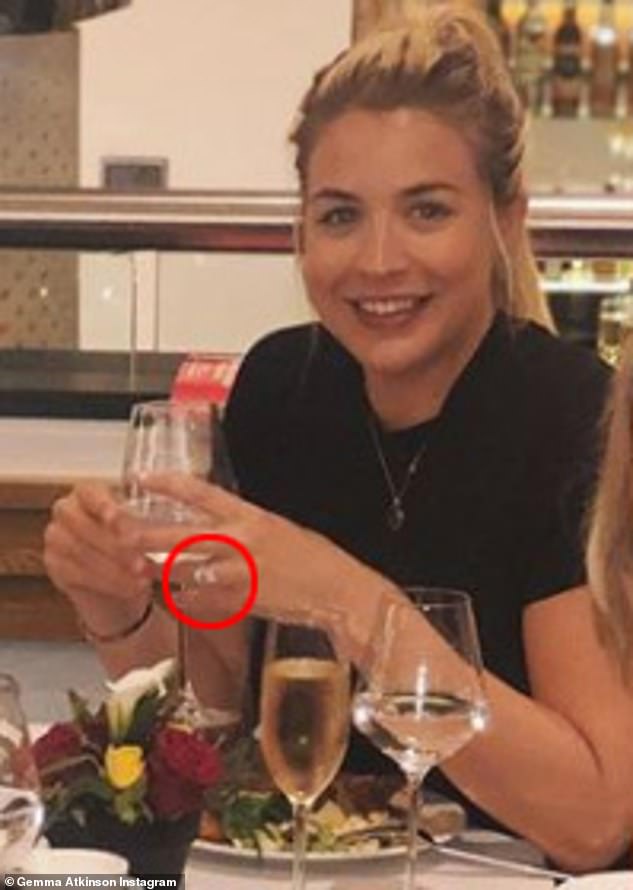 Not true: The star recently sparked engagement rumours when she flaunted a huge sparkler on her ring finger 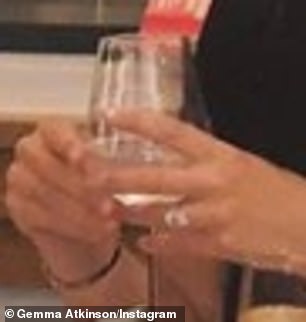 Some-ring to tell us? In the snap taken at Old Trafford, eagle-eyed fans noticed the actress sporting a huge rock on her wedding hand while she enjoyed lunch with the girls

The snap in question showed Gemma raising a glass with three of her glam close female friends ahead of the Treble Reunion Match.

Not making any announcements, Gemma captioned the post: ‘Fabulous hospitality as always at Old Trafford. All set to watch the Treble Reunion Match with the girls! ⚪️ All for the Manchester United Foundation.’ (sic)

However, a handful of loyal admirers were quick to point out that Gemma has previously said she has a special ring she likes to wear on her engagement finger.

Among the fans, one wrote: ‘Gemma has said on posts before that she has a ring she chooses wears on that finger!’

The actress, who is expecting her first child with her Strictly beau Gorka, hopes to try the popular birthing technique when she has her baby in July. 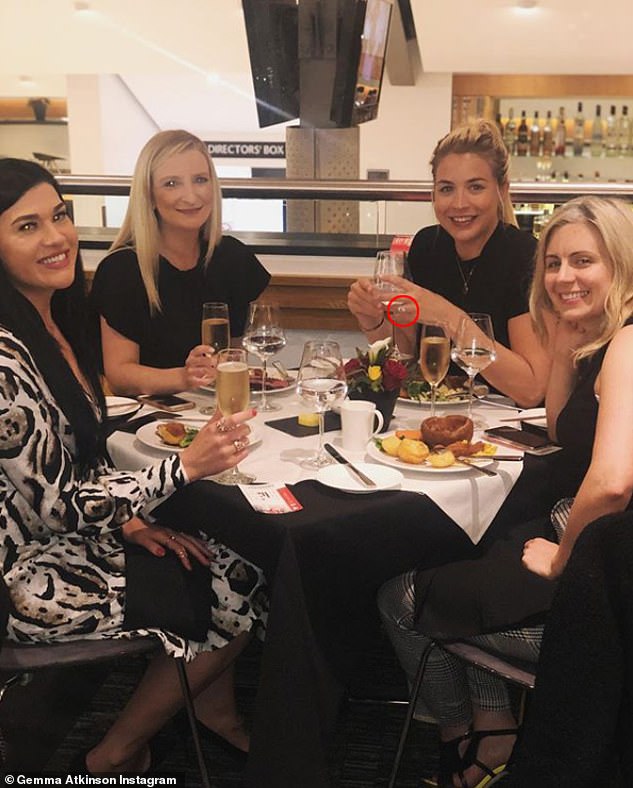 Days out: The snap in question showed Gemma raising a glass with three of her glam close female friends ahead of the Trble Reunion Match 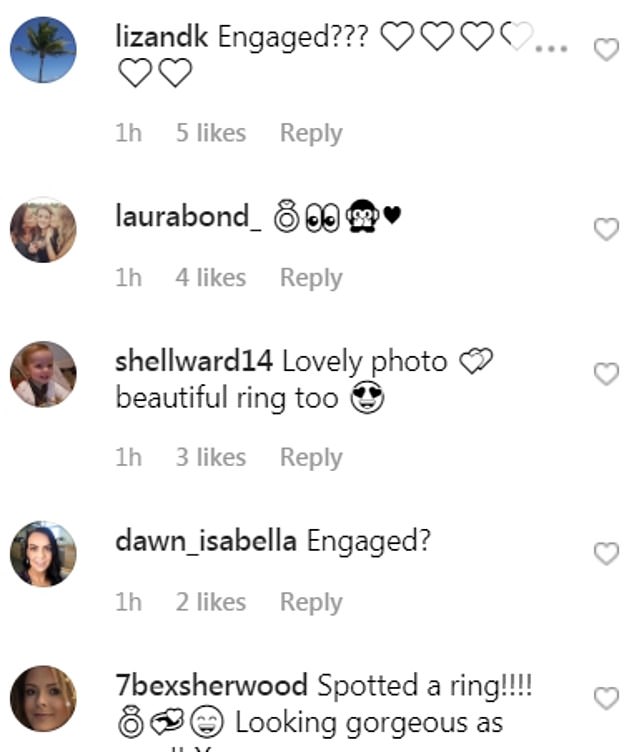 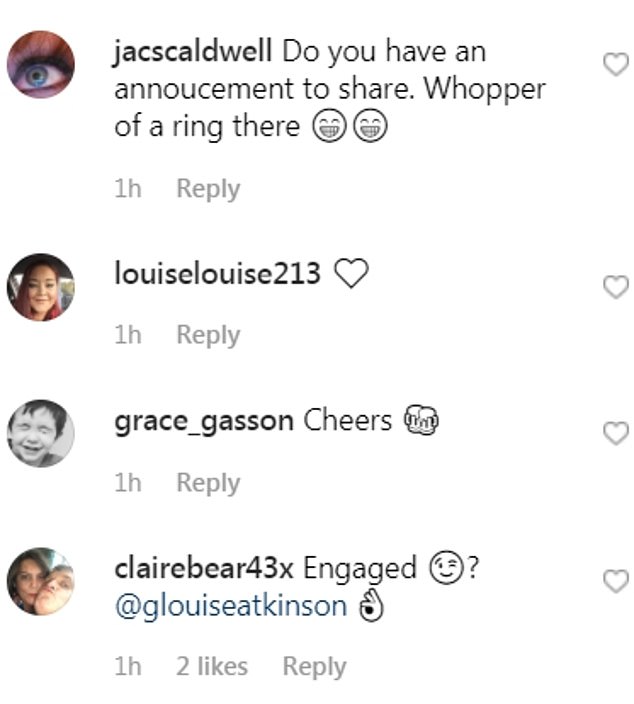 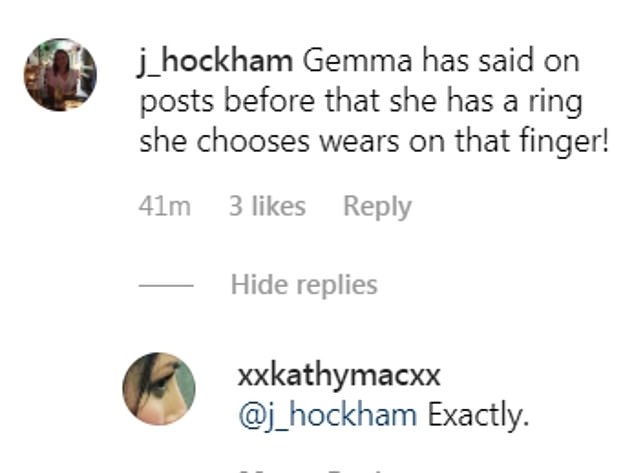 What’s going on? A flurry of fans questioned whether the star had got engaged by simply asking beneath the post: ‘Engaged?’

It’s been hard for Gemma as she admitted recently she’s had an emotional rollercoaster because she wished her late dad David could have met her first child.

Hypnobirthing is described as a complete antenatal education which teaches the expectant mother breathing techniques and self hypnosis for a natural birth, free of pain relief.

The method teaches women how to relax their bodies to reduce pain and avoid releasing adrenaline caused by stress, which can prolong labour.

The method has many celebrity fans including Angelina Jolie, and reportedly Kate Middleton.

Soap star Gemma was just 17 when her father David passed away from a heart attack aged 52, despite never smoking and only drinking alcohol occasionally.

She said: ‘My dad taught me everything, expect how to live without him.

‘It dawned on me today the wonderful relationship I had with my grandparents when I was growing up, and then it hit me my dad won’t get to meet his Grandchild.

‘Seems crazy… I blame the pregnancy hormones but today has been a bloody rollercoaster. Fits of laughter to sobbing. Thankfully, I had cookies’

All Gemma’s fans have been on her pregnancy journey with her as she has been documenting the stages with bump snaps and candid captions on social media. 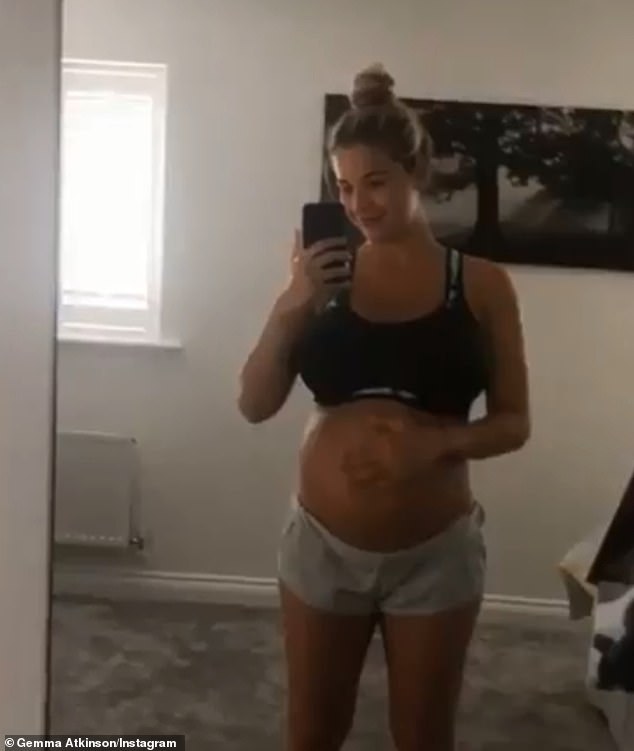 Expecting: Pregnant Gemma has revealed she’s preparing to try hypnobirthing when she welcomes her first baby in two months time 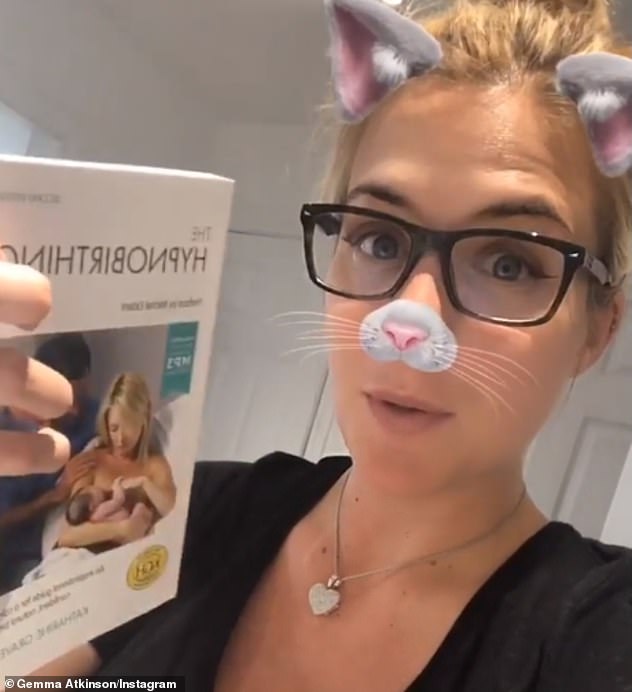 Book worm! Gemma divulged she had been reading her hypnobirthing book all day and she enthused she was ‘genuinely excited’ to give birth

Gemma and Gorka first revealed the news to their followers on February 1 when they revealed there would be a welcome addition to the family.

The couple first crossed paths when they met on Strictly Come Dancing in 2017 but they weren’t partnered up together on the show.

Their romance didn’t come to light until they went on their first mini break and made their love Instagram official in February 2018. 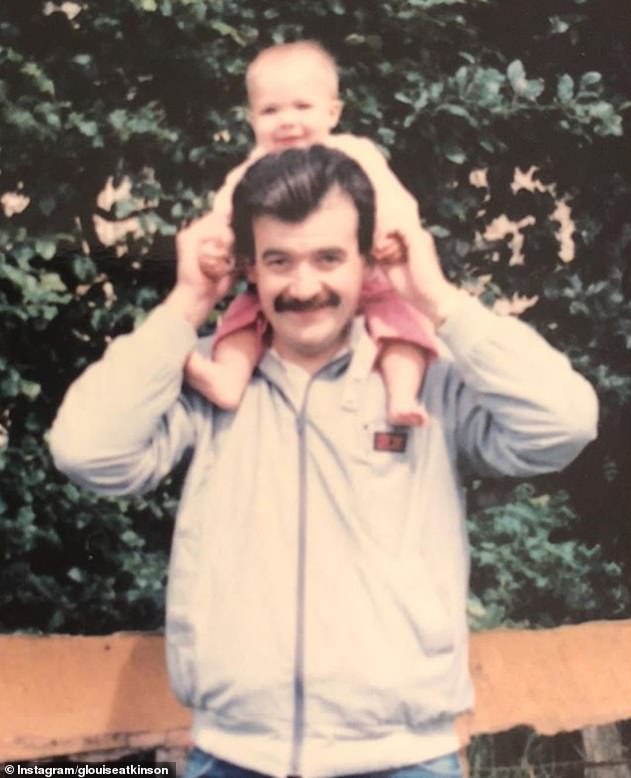 Tragic: It’s been hard for Gemma as she admitted recently she’s had an emotional rollercoaster because she wished her late dad David could have met her first child