Halle Berry was dressed to impress for a glamorous night at the Oscars.

The actress, 54, was a sight to behold in a plunging magenta gown as she made her red carpet debut with her dashing boyfriend Van Hunt, 51, at the glitzy Hollywood event.

All eyes were on Halle, however, who showcased an edgy new haircut that complimented her gorgeous complexion. 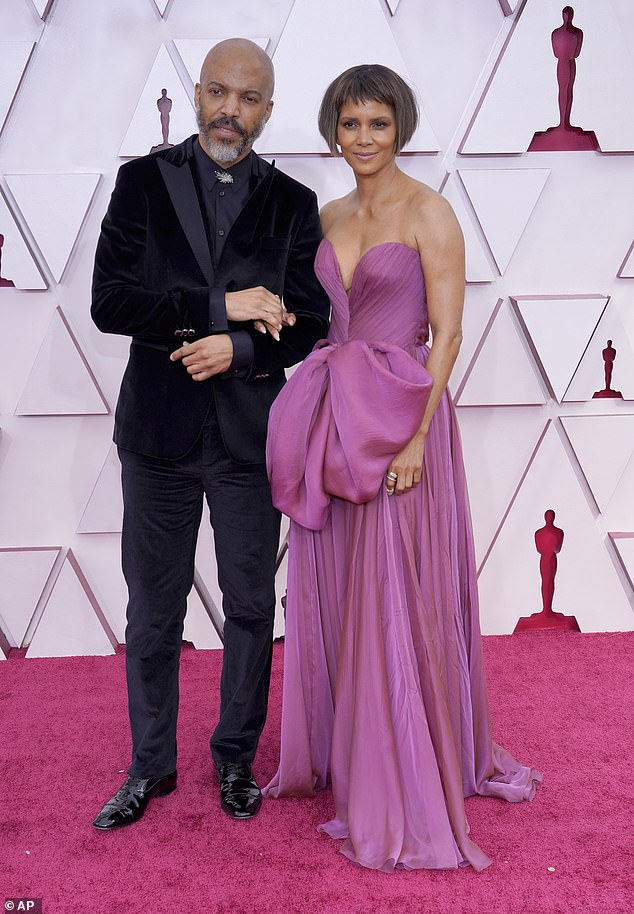 Just the two of us! Halle Berry enjoyed a glamorous evening at the 2021 Oscars with her boyfriend Van Hunt in Los Angeles on Sunday

The dramatic new chop framed her famously youthful and beautiful complexion, while a hint of fringe skimmed the top of her forehead.

Halle showed off the end result of her haircut on her Instagram account, suggesting the cut was done not long before her red carpet arrival.

On her Instagram Stories, the actress posted a photo of her newly chopped locks laying on the floor.

Halle’s new hairstyle contrasted her otherwise very romantic dress, which came with a plunging neckline, flowing skirt, and giant bow at the front of the gown.

Va va voom! Berry was a vision in her plunging glam gown 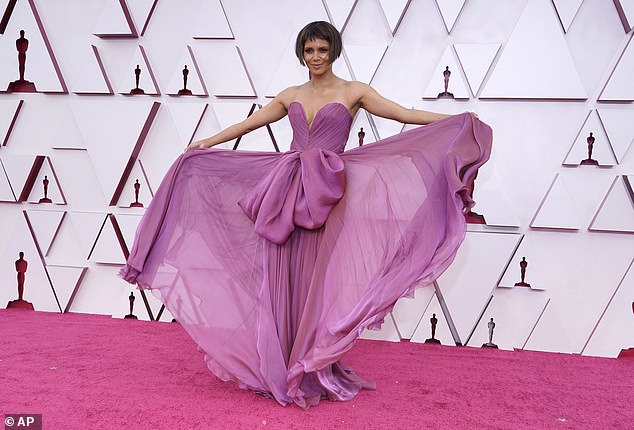 Strike a pose: Ms. Berry got heads turning as she played about with the sheer fabric of her dress

The actress showcased her slim arms as she played about with the sheer fabric of the dress.

While all eyes were on his other half, Van still held his own in a sharp velour jacket with midnight black trousers and glossy leather shoes.

Halle and her boyfriend have been going strong since announcing their romance last year. 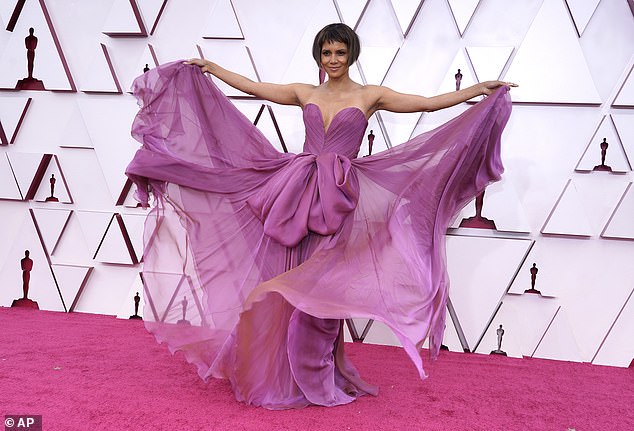 Red carpet icon: Halle’s new hairstyle contrasted her otherwise very romantic dress, which came with a plunging neckline, flowing skirt, and giant bow at the front of the gown 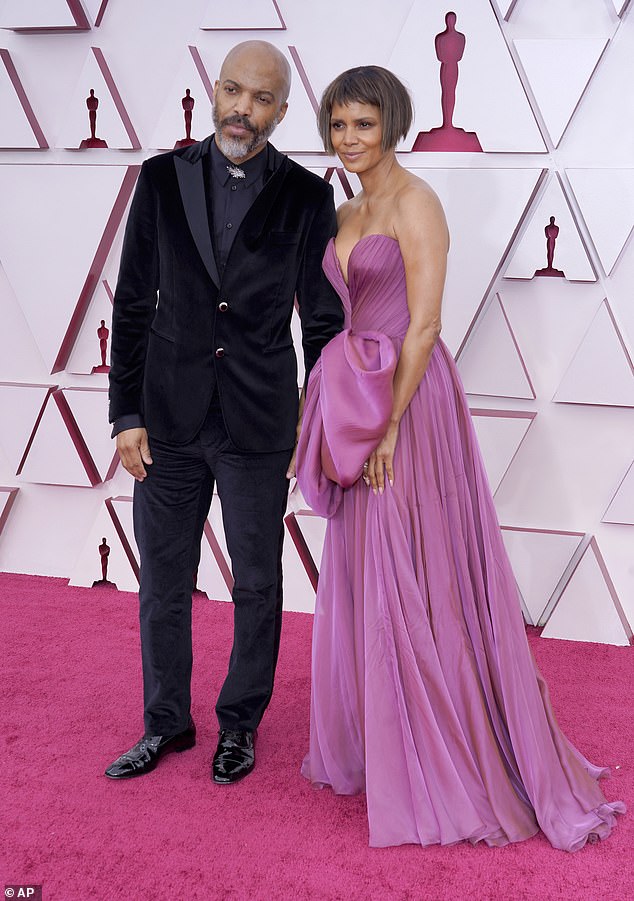 Her plus one: Berry and Hunt have been going strong since debuting their romance last year

Earlier this month Halle posted a loved-up snap of herself cuddling her singer boyfriend as he played the guitar.

‘i’ll be ya groupie baby, cause you are my superstar….. who’s gonna watch BRIC Jazz Fest with me tomorrow?’ she captioned the black-and-white snap.

Halle, who isn’t up for any awards this year, was just one of many stars walking the socially-distanced red carpet. 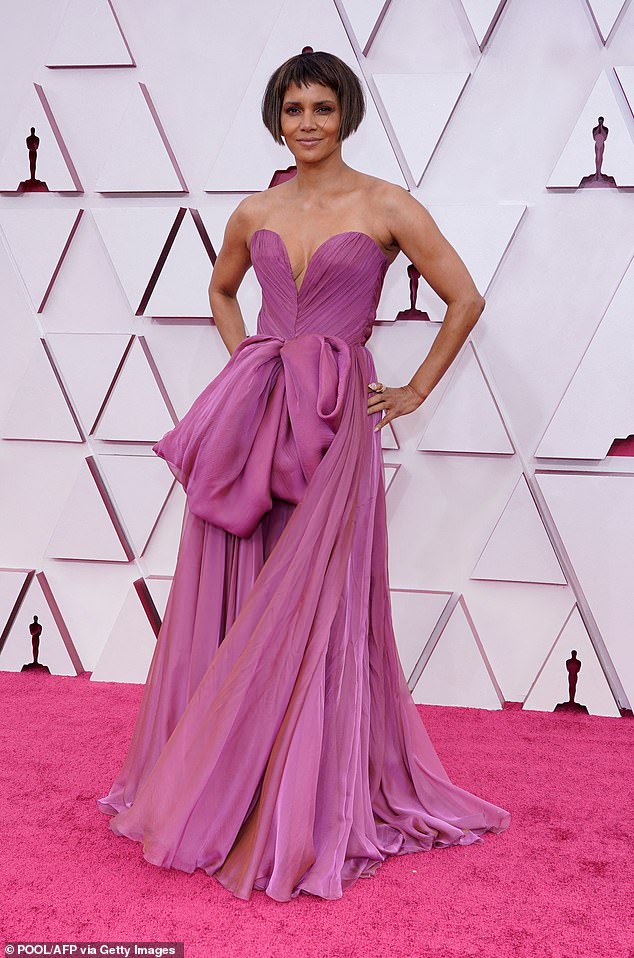 Perfection: The star oozed confidence on the socially-distanced red carpet 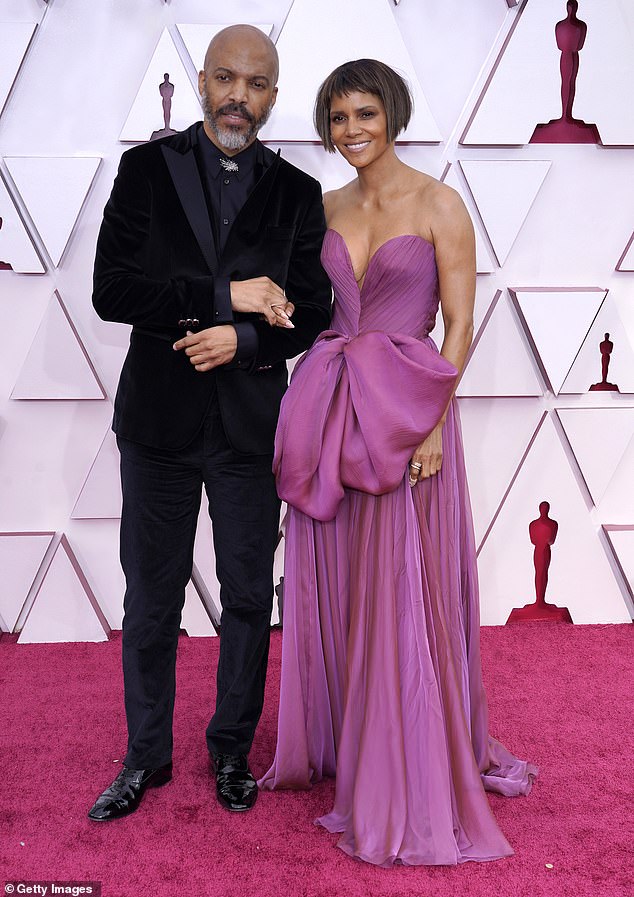 ‘I’ll be ya groupie baby’: The actress posted a loved-up snap with her beau to her Instagram account earlier this month with the sweet caption

The 93rd Academy Awards marks the first time Tinseltown’s finest have assembled in over a year, for a three-hour show that co-producer Steven Soderbergh has described as being ‘like a movie.’

The Academy of Motion Picture Arts and Sciences is hosting the delayed ceremony at the historic Union Station in Los Angeles, California where socially distanced movie stars can go mask-free while on-camera or seated in the main show room.

Built in 1939, the national historic landmark and its main terminal is 161,000 square feet, creating plenty of room for theatrics on Hollywood’s biggest night.

During normal times, when COVID restrictions haven’t crimped travel, more than 100,000 people a day walk through its halls.

Comparatively the Dolby Theatre, where the glitzy event is usually held, can only seat around 3,300 people which would have created difficulties in putting on an award show amid the pandemic.

But in the spacious station, believed to be large enough to accommodate social distancing requirements with its soaring main hall featuring windows that are 40-feet high, stars have more room to mingle and maneuver. 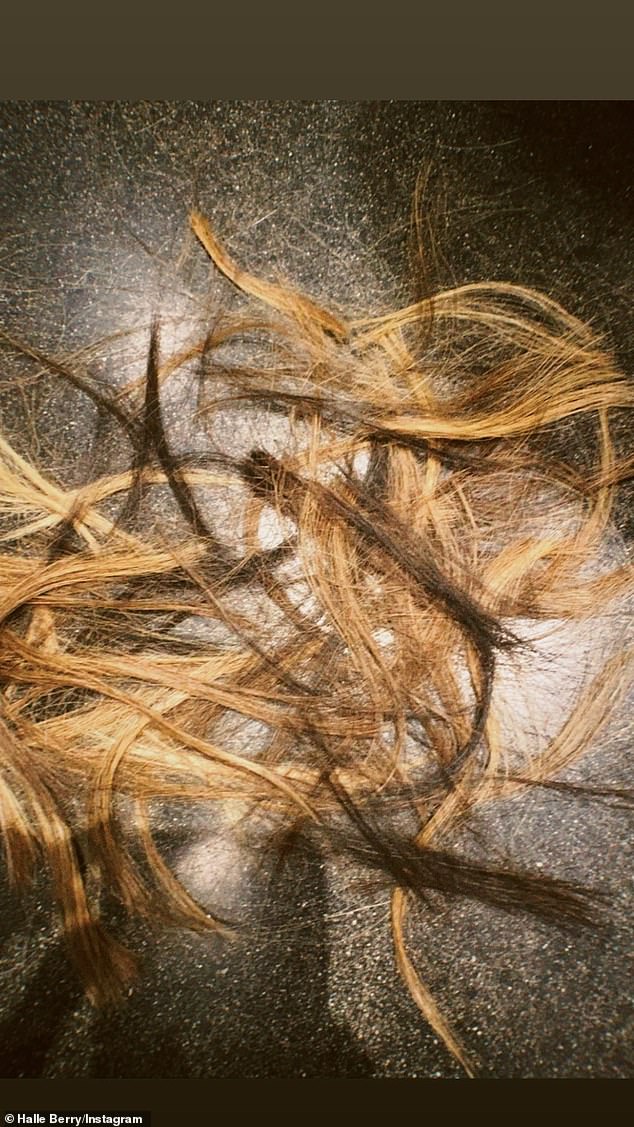 New do, new you: Berry showed off her newly chopped locks lying on the floor shortly before her Oscars arrival

Judas and the Black Messiah

Best Picture: The Trial of the Chicago 7 is one of the eight films nominated

Best Actress in a Leading Role

Vanessa Kirby – Pieces of a Woman

Best Actress in a Supporting Role

Best Actress in a Supporting Role: Olivia Colman is up for her role in The Father

If Anything Happens I Love You – WINNER

The Man Who Sold His Skin

Best Sound: Greyhound – a war film starring Tom Hanks – is up for the gong

Judas and the Black Messiah

H.E.R. – Fight for You – Judas and the Black Messiah – WINNER

Hear My Voice – The Trial of the Chicago 7

Speak Now – One Night in Miami…

Best Makeup and Hairstyling: Ma Rainey’s Black Bottom is vying for the award

Thomas Vinterberg – Another Round

Best Actor in a Leading Role

Best Actor in a Supporting Role

Sacha Baron Cohen – The Trial of the Chicago 7

A Shaun the Sheep Movie: Farmageddon

One Night in Miami…

Shaka King and Will Berson – Judas and the Black Messiah

Aaron Sorkin – The Trial of the Chicago 7

Best Writing (Original Screenplay): Judas and the Black Messiah is up for the gong

A Concerto Is a Conversation

A Love Song for Latasha

The One and Only Ivan