The Bachelorette alum Hannah Brown suffered the wrath of keyboard warriors on Friday, when she dictated a questionable caption on her most recent bikini-clad Instagram portrait.

‘What’s more contagious than a smile,’ wrote the 25-year-old reality star, who could be seen posing before a slew of palm trees.

Shortly after posting, Brown was quickly met with a hoard of replies referencing the current coronavirus pandemic as something ‘literally’ more contagious than a smile. 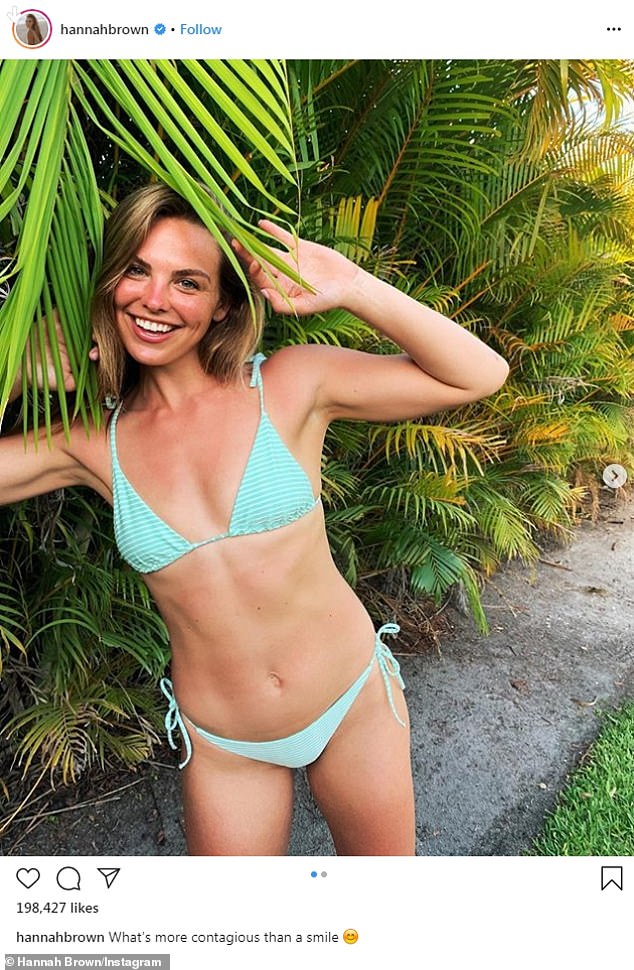 Yikes: The Bachelorette alum Hannah Brown suffered the wrath of keyboard warriors on Friday, when she dictated a questionable caption on her most recent bikini-clad Instagram portrait

The reality star faced her critics head on, when she replied to one follower who bravely commented: ‘The coronavirus, hannah, the freakin coronavirus.’

‘Shhh, spread love not fear,’ directed the blonde beauty, in the response seen by her 2.7million followers.

Brown’s flippant remark did not slow down the flood of comments marveling at her caption’s tone-deaf nature. 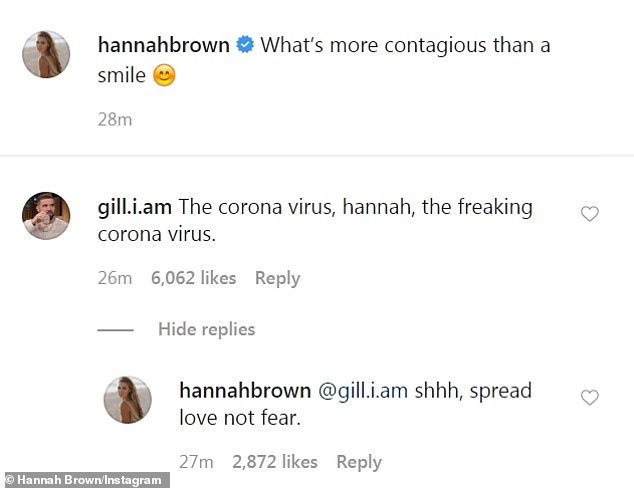 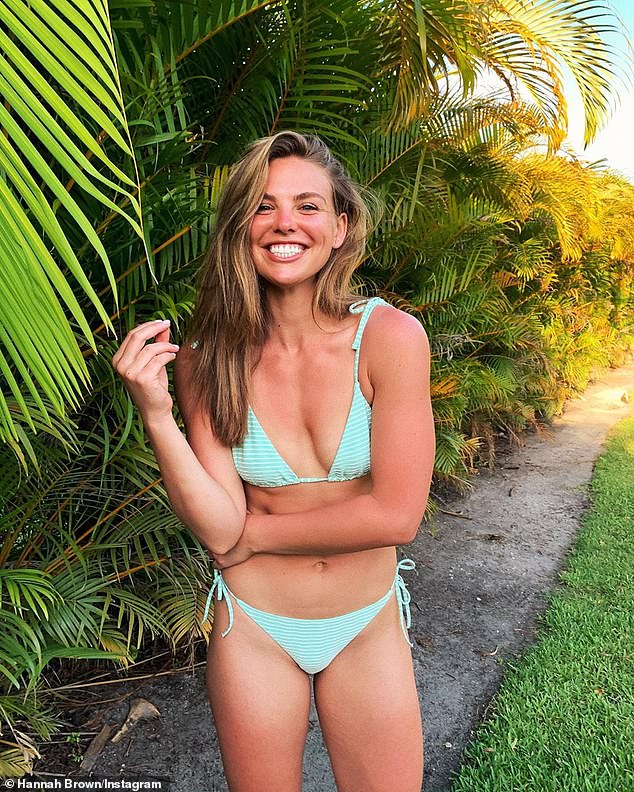 ‘Shhh, spread love not fear,’ directed the blonde beauty in response to a commenter calling her out

This is not the first time Hannah has found herself catching some serious coronavirus-related heat.

On Thursday, the reality star, who is currently bunkering down at ex Tyler Cameron’s Florida home with a slew of their closest pals, occupied some of her idle time by creating some short form content on the popular app TikTok.

Brown, joined by her housemates, created her own version of the popular Flip The Switch TikTok meme, which sees men and women swap clothing to the tune of Drake’s 2018 single Nonstop. 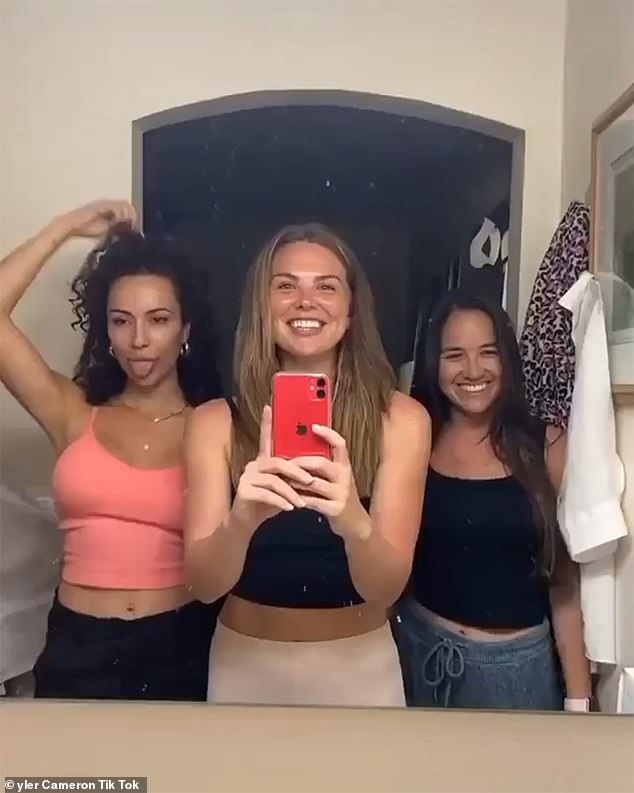 Viral: The group used their isolation time to create their version of the popular Flip The Switch TikTok meme 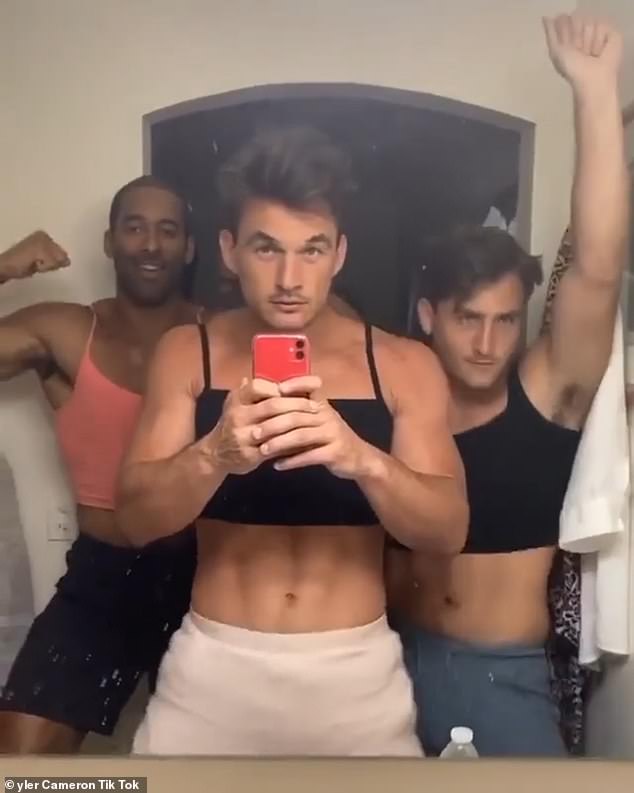 Though seeing Tyler try and squeeze into Hannah’s tiny black tank top amused many, raking in 178k views in a little over two hours, others were not impressed.

What riled up viewer’s was Brown’s use of the term ‘Quarantine Crew’ in the caption of the clip, while blatantly engaging in a close contact activity.

Earlier in the week former Bachelor Nick Viall appeared to slam the squad while appearing on influencer Claudia Oshry’s Instagram Live on Wednesday.

He didn’t call out anyone by name when asked who he was talking about.

The White House strongly discouraged any gatherings of 10 or more people during a press briefing Monday. 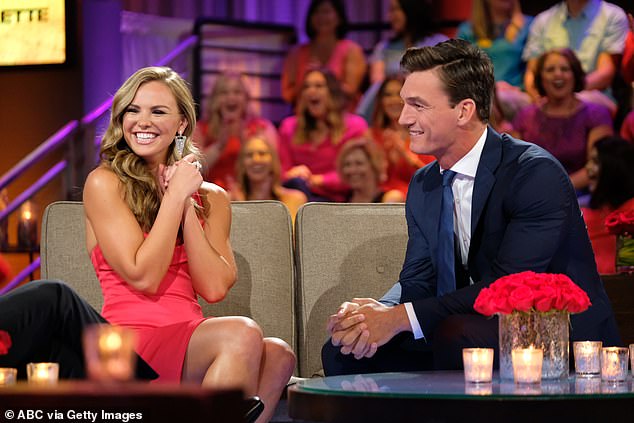 Smitten: Cameron famously came in second place on season 15 of ABC dating series The Bachelorette last year, but Hannah then asked him out after breaking off her engagement with ‘winner’ Jed Wyatt

Meanwhile it has been said Hannah and Cameron have a good attitude about the attention they’ve been receiving since deciding to quarantine together in Florida.

An insider told Us Weekly on Thursday: ‘Tyler and Hannah are very much aware of the attention that’s been on them recently.

‘They think it’s funny that people are so invested.’

The on-off couple first sparked reunion rumors when the hunky Bachelorette runner-up was spotted picking the beauty queen up from the Palm Beach International Airport this past Saturday.

Since then, it appears the pair have been inseparable, seen out almost everyday since.

Cameron famously came in second place on season 15 of the ABC dating series The Bachelorette last year, but Hannah then asked him out after ‘winner’ Jed Wyatt was revealed to be somewhat of a fraud – discovered to have had a serious girlfriend right before his time courting Brown on the show.