Products featured are independently selected by our editorial team and we may earn a commission from purchases made from our links; the retailer may also receive certain auditable data for accounting purposes.

Whether you’re a hardcore fight fan or a casual observer looking to dip your toe further into the pool, Saturday’s UFC 255 event presents an opportunity that’s hard to pass up.

Get all the content you need by subscribing to The Disney Bundle and purchasing UFC 255 this weekend.

Along with ESPN+, the online streaming service that includes a bevy of UFC content along with other live sports and original programming, you can bundle subscriptions to Disney+ and Hulu – all for just $12.99 per month. 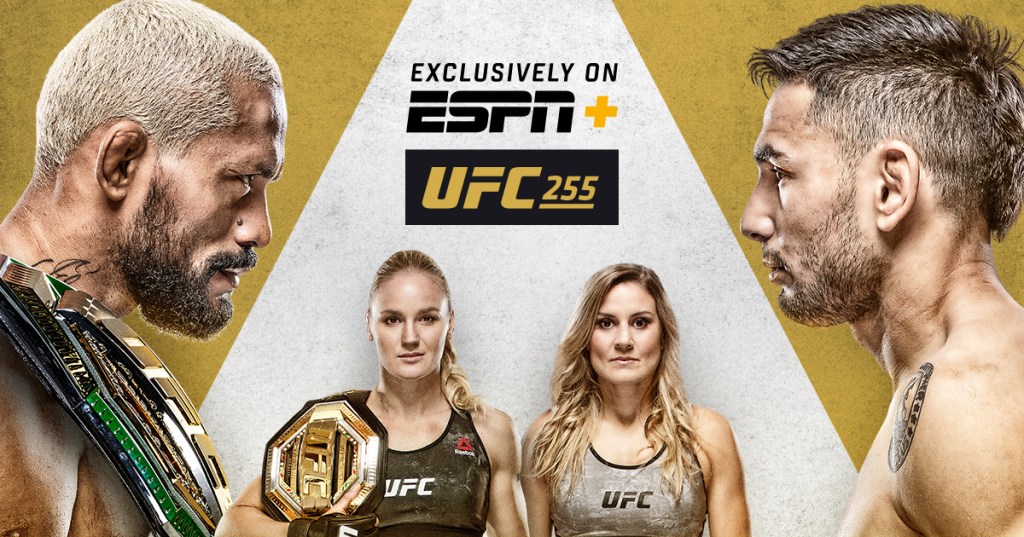 In the UFC 255 main event, former hairdresser and sushi chef Deiveson Figueiredo (19-1) looks to add to his remarkable fighting run when he puts his flyweight belt on the line for the first time against hard-hitting contender Alex Perez (23-5).

The co-headliner of the card sees one of the most dominant female fighters alive, Valentina Shevchenko (19-3), make her return to action. Nicknamed “The Bullet,” Shevchenko tries to extend her women’s flyweight title reign with a fourth consecutive defense, against Brazilian challenger Jennifer Maia (18-6-1).

Elsewhere on the card, scrappy welterweights Tim Means and Mike Perry clash in the featured bout. UFC Hall of Famer Mauricio “Shogun” Rua, meantime, fights Paul Craig in a rematch of their November 2019 fight that ended in a draw in the main card opener.

UFC 255 is the promotion’s 10th pay-per-view of the year, all of which have streamed on ESPN+. Notable stars such as Conor McGregor, Israel Adesanya, Jon Jones, Jorge Masvidal and more have all competed on the platform, and are expected to return to the cage in 2021.

The action and entertainment from the deal doesn’t come solely through the UFC’s octagon, though. With the Disney Bundle, Disney+ offers everything from new release to classics and exclusive originals, while Hulu offers a huge streaming library filled with your favorite TV shows, groundbreaking originals and your favorite movies.