David Potts has revealed that he’s lost a whopping three stone during lockdown.

The Ibiza Weekender rep, 27, first spoke about his weight loss journey last October however announced on Monday that he’s managed to shed even more pounds.

Sharing two snaps of himself to Instagram, the reality star showcased his slimmed-down visage in a filter-free picture alongside a throwback selfie. 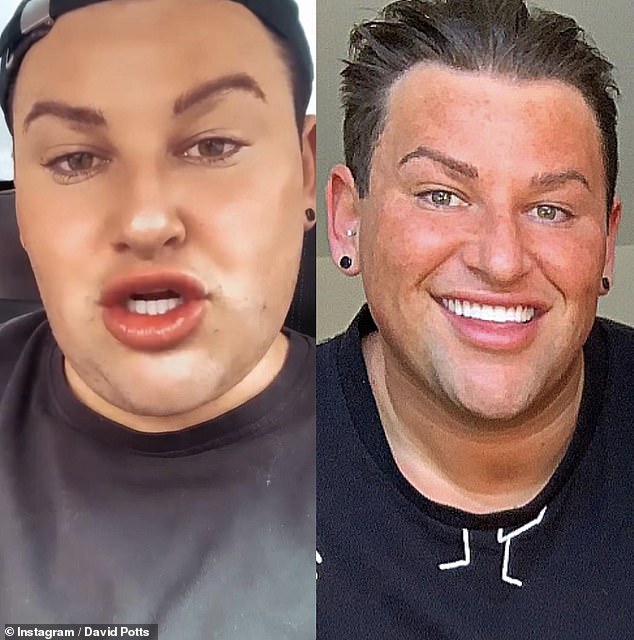 Impressive: David Potts has revealed that he’s lost a whopping three stone during lockdown after changing his lifestyle (pictured left in a recent snap and right, in a throwback selfie)

Dave penned: ‘3 STONE DOWN HUNS!! Ahhhhh I can’t believe it! I changed my lifestyle 4 months ago now and I’ve never been so motivated.

‘This new skinny me is only another 7 stone away and I just cannot wait!

‘I wanna say a massive thank you so @davidnorrispt for pushing me and keeping me motivated! Also wanna say thank you to one of my best friends @hayleyfanshaw for always being there for support!

‘OMG you huns won’t recognise me. ps the no filter life is abit of meeeeee.’ 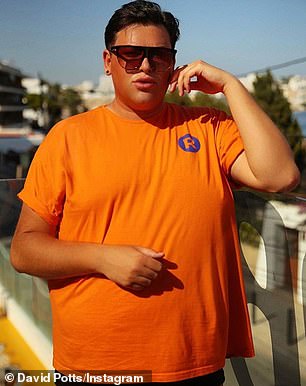 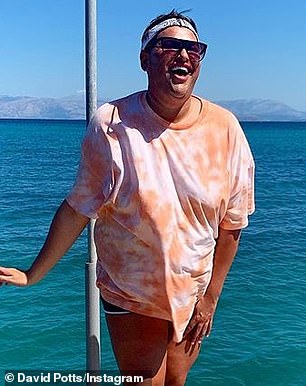 Before and after: The Ibiza Weekender rep, 27, previously revealed he wanted to shed weight to feel healthier (pictured left in 2019 and right during the summer of 2020 during his health kick) 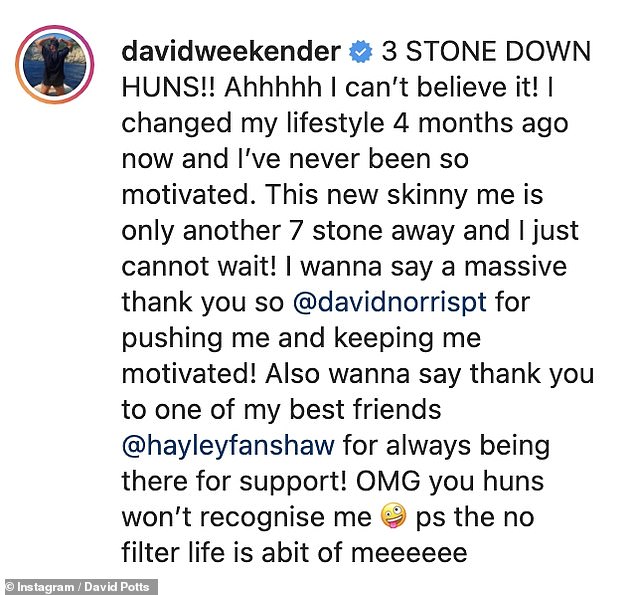 ‘I’ve never been so motivated’: David updated his fans on his further weight loss, joking that they won’t be able to recognise him soon

The Ibiza Weekender rep had previously told Access All Areas on FUBAR Radio, that he decided to lose weight to feel healthier.

Speaking to hosts Bobby Norris and Stephen Leng in October, the Celebrity Karaoke Club star said: ‘I’m on like this big weight loss journey at the minute.

‘I’ve lost just under two and a half stone.

‘And then I went on holiday to Greece for two weeks and then I put like four pounds back on but I’ve still lost like over two stone.’ 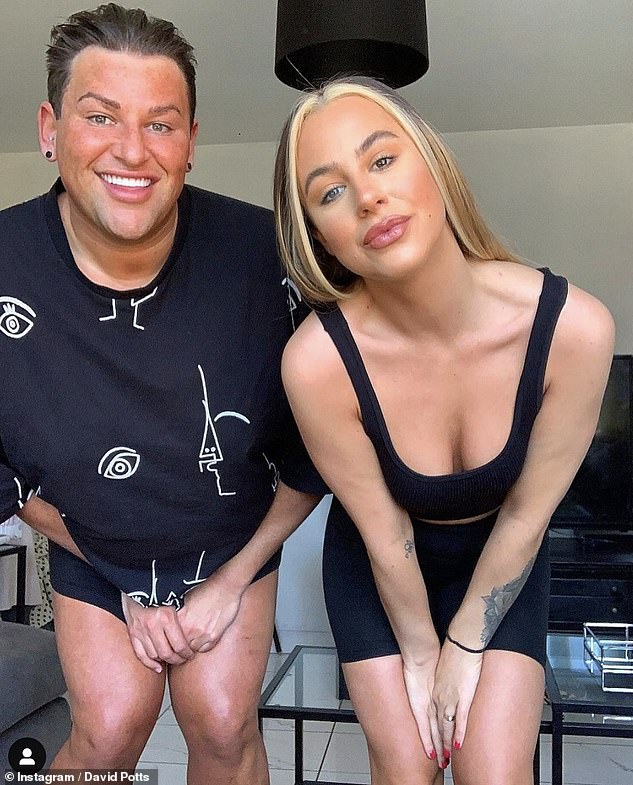 Slim: He looked sensational as he showed off his trimmer legs and thin visage in a snap with pal Jody shared on Sunday

Detailing how he’s gone about it, he explained: ‘It’s called Exante the company I’m working with.

‘It’s just basically a calorie deficit diet and then I’m also doing my personal training sessions as well with my PT who’s amazing, puts me through my paces.

‘I’m literally sat in the car park like nearly throwing up for an hour, literally after every session.’

Discussing the reason for shredding the weight, David said: ‘I’m just kind of like wanting to lose weight and just be a healthier person… I want to look nicer in myself. 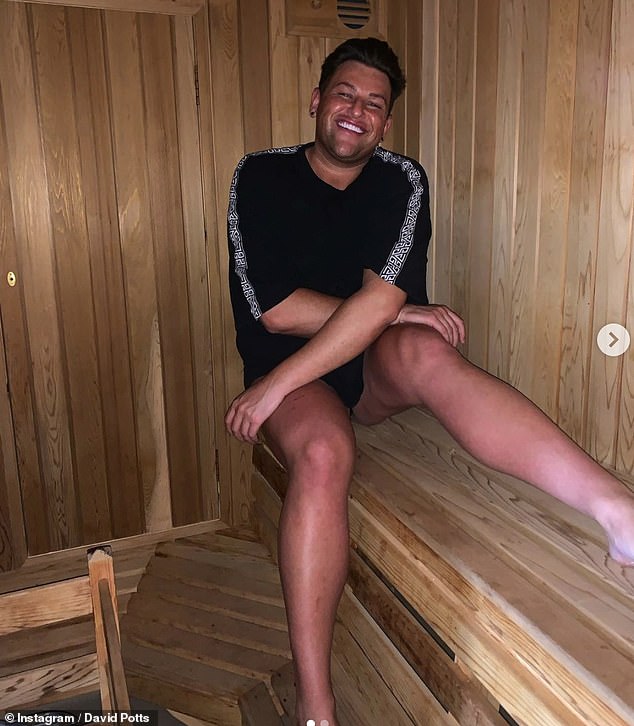 Health kick: David also looked trimmer as he flaunted his toned legs in a snap from March

‘I don’t look in the mirror and think that I look disgusting, I just think I want a healthier lifestyle.’

He continued: ‘Being overweight obviously isn’t healthy. I’m not saying there’s anything wrong with it.

‘There definitely isn’t because I’ve been very overweight for such a long time now, but I just want my body to genuinely be healthier.

‘I’m aiming for 10 stone. I literally want to be dodging grids walking down the street!’ 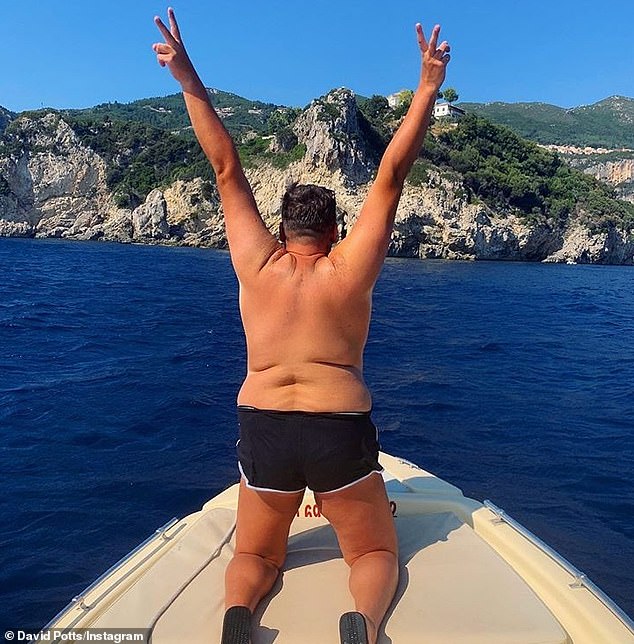 Setting goals: David has previously said he’s  ‘aiming for 10 stone. I literally want to be dodging grids walking down the street!’

He has also appeared on Celebs Go Dating where he continued his search to find a man.

He shared how he copes with homophobia – of which he has been a victim.

‘I’m quite hard faced really and I don’t really care what people think. What you see is what you get. I guess in this industry for a lot of people it can be quite difficult with trolling and abuse in the street and stuff like that,’ he said.

‘I’m kind of like really, don’t really care what you think, this is who I am, like it or lump it kind of thing. If you don’t like what you see then swivel! I mean I’m not bothered.’

David did admit that it’s not always easy to brush the comments off: ‘There has been a couple of times where it’s kind of affected me where it’s been like really, really bad, but then I just think, what you honestly think I’m gonna let you change my life? Absolutely not. What you see is what you get, end of.’ 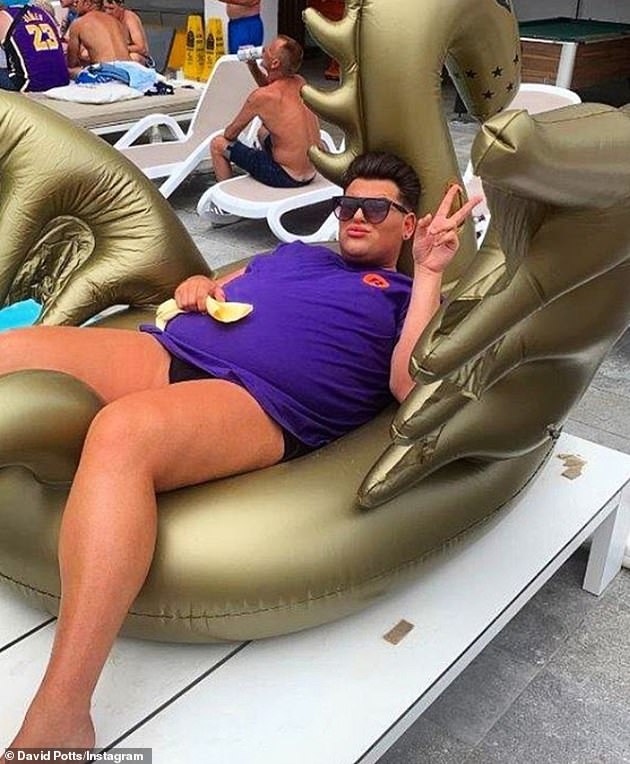 Doing it for him: David explained he wants to shed the pounds to feel healthier (pictured in a throwback snap from before his weight loss)