Love Island star Alexandra Cane has given fans a glimpse inside her stunning new London flat.

The reality star, 28, shared a gallery of snaps from her property which includes bright airy spaces and a sleek white finish.

Alexandra moved into her own flat earlier this month after revealing that she always dreamed of living in an Edwardian-inspired property. 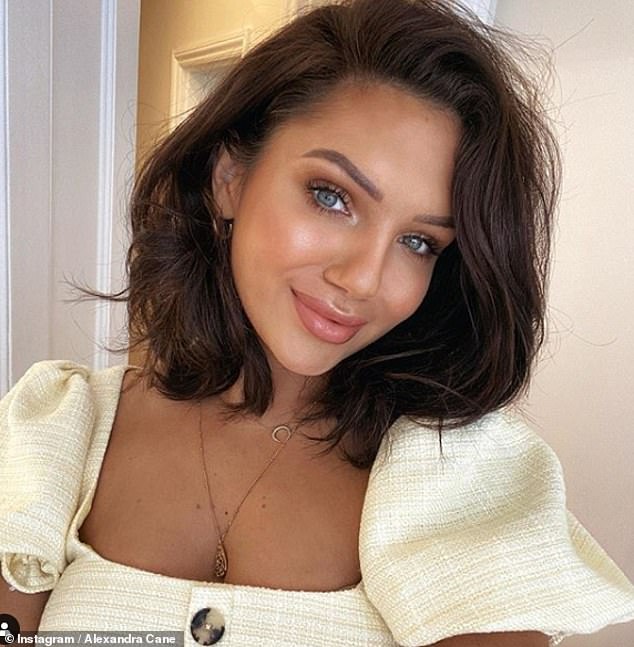 In Alexandra’s new flat, it seemed that white is her colour of choice, as each room boasts a light and open finish with pale woodwork.

Along with chic radiator covers and bay windows, the kitchen is made of a classic marble, and Alexandra has filled the cupboards with dark grey plates and bowls.

Despite the home’s classic feel, Alexandra still seems to be adding a modern twist to the space by adding funky wooden drawers and full-length mirrors. 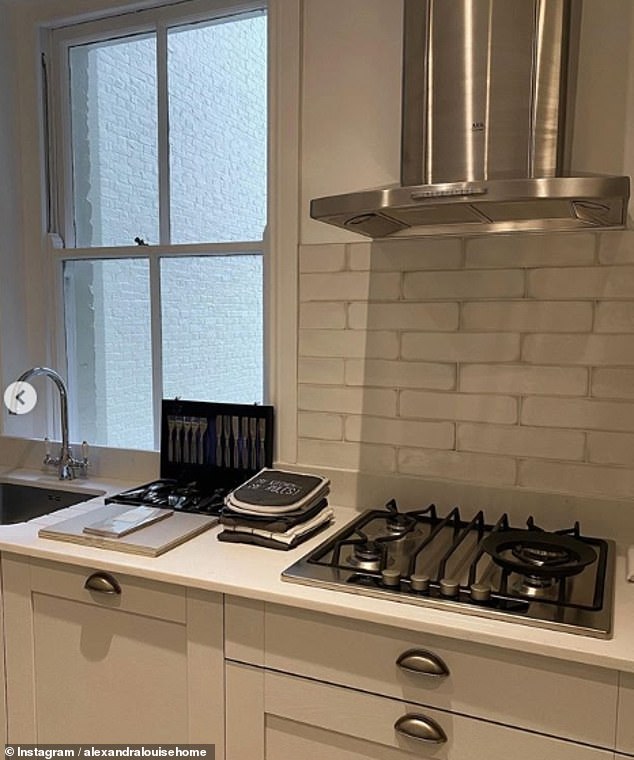 Picturesque: The reality star shared a glimpse of her Victoria inspired property in the midst of renovations, including a sleek chrome kitchen 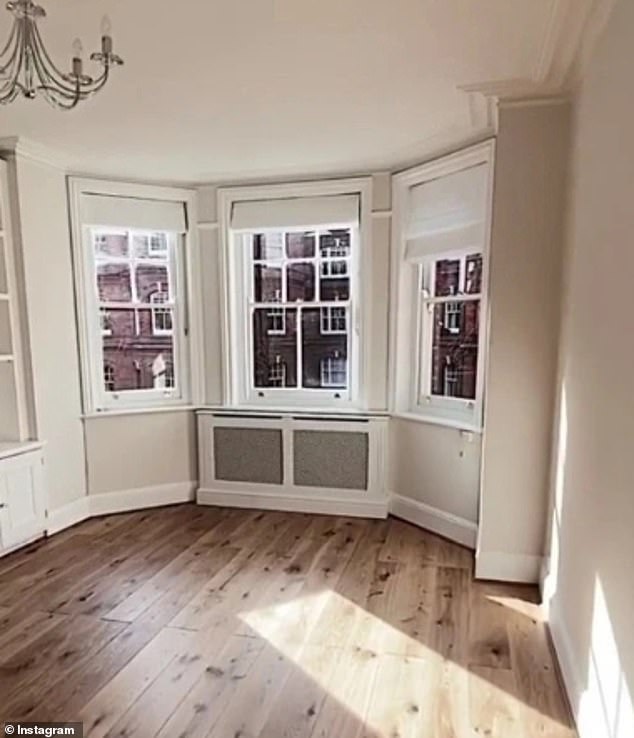 Relaxed: The living room boasts open bay windows and chic radiator covers, as Alexandra shared a glimpse of her new home on its designated Instagram account 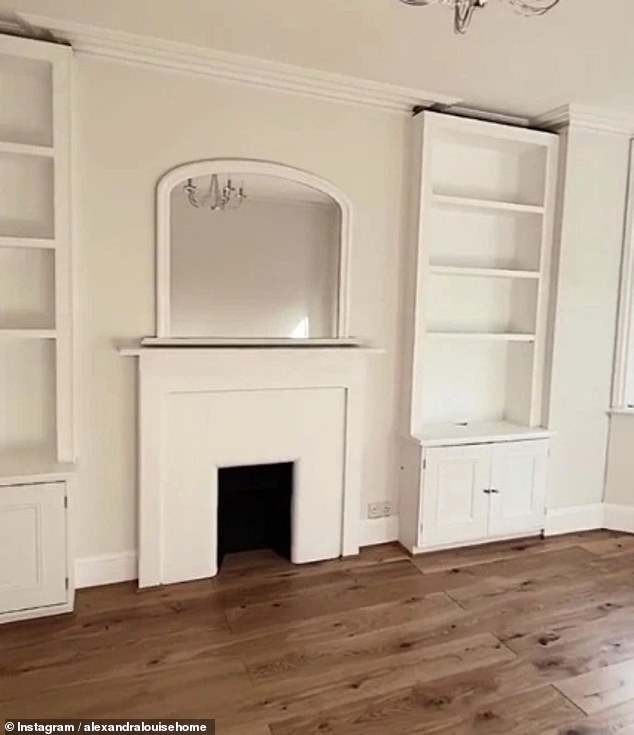 Classic: The star seems to be going for the minimalist look, with dark wood floors and a white finish 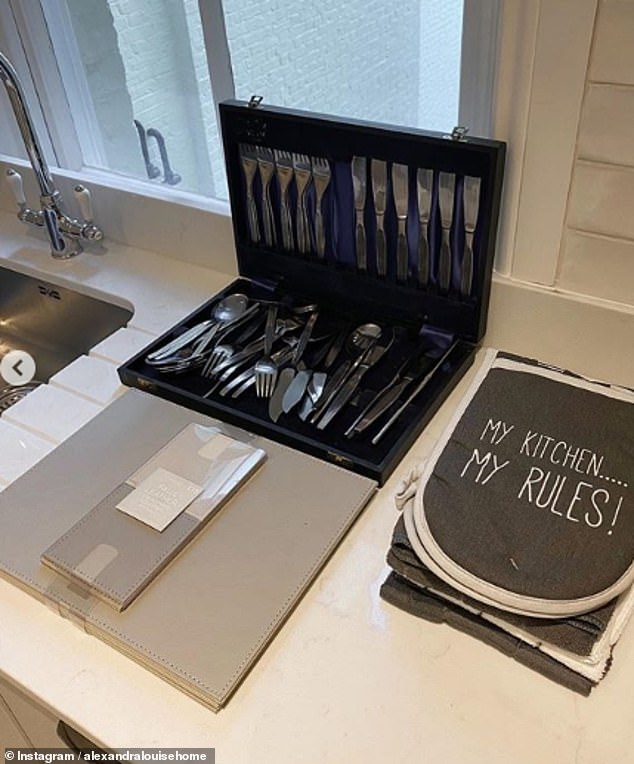 Funky: Alexandra has added some quirky additions to her kitchen, including some playfully-named oven gloves

Alexandra shared several snaps of her brand new kitchen, which includes several quirky additions, including a pair of oven gloves with the label my Kitchen… My Rules!

Along with an enormous bed and fireplace, Alexandra ensured she could take plenty of snaps of her toned physique with a Renaissance-inspired mirror.

Last month, Alexandra broke the exciting news to fans that she had moved into her own flat, writing: ‘First time moving out… I did it!!! ✨ Thank you all for making this possible for me. Onwards & upwards, here’s to the next chapter.

‘Will be posting more about my new home on my new page @alexandralouisehome #newhome #firsthome #property.’ [sic] 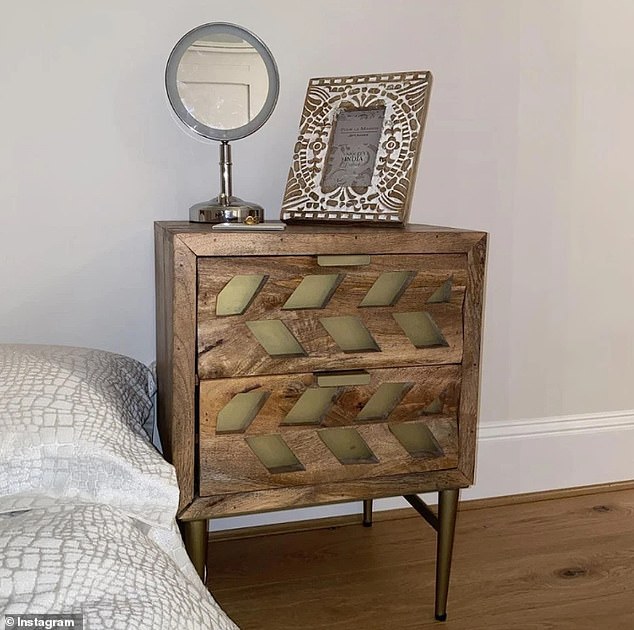 Standing out: Despite the home’s classic feel, Alexandra still seems to be adding a modern twist to the space by adding funky wooden drawers and full-length mirrors 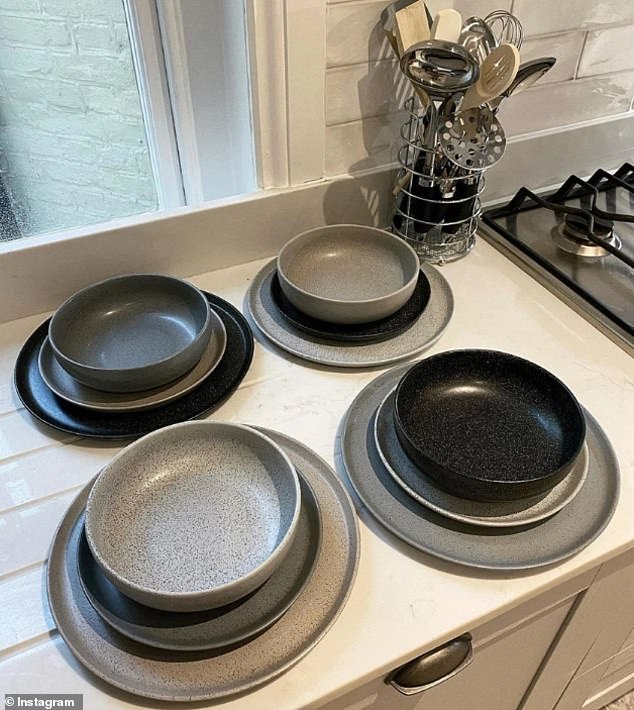 New features: As she furnishes her new abode, Alexandra’s flat now has some stylish grey rock-effect bowls and plates 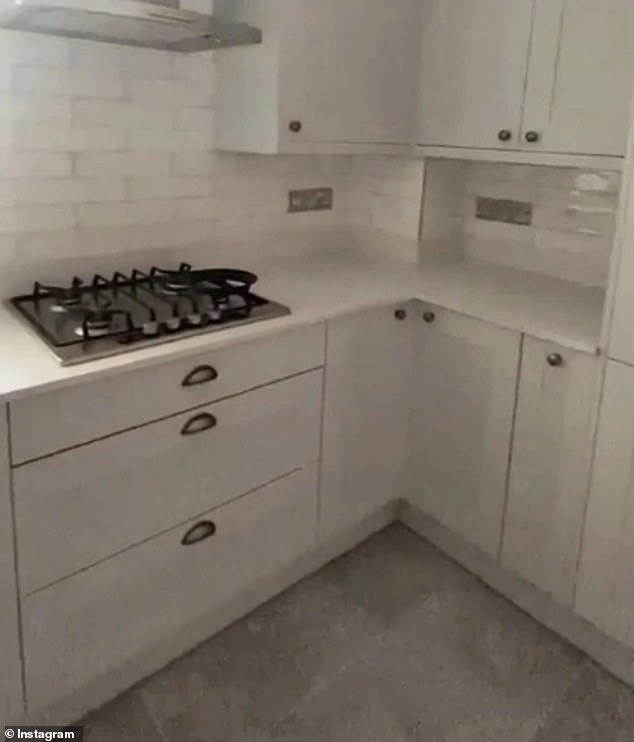 Simple: Alexandra is clearly going for a minimal design in her home, as it is based around a neutral colour scheme

Last month, the brunette revealed she’s had to throw out her entire wardrobe because her clothes are ‘literally hanging off’ her 5’7” frame following her incredible two stone weight loss.

The reality star – who has launched her new fitness plan, The Happy Body – also insisted the changes are ‘internal as well’ – revealing she no longer suffers with anxiety or panic attacks thanks to her new lifestyle.

Alexandra told MailOnline: ‘I’m a size 6. I’m an extra small in all clothes, which is crazy because I’ve had to throw out every single item in my wardrobe.

‘I’m gonna do giveaways on Instagram and stuff for my followers because it might as well go to a good home and get wear out of it. Now I’ve got to go and get myself a completely new wardrobe.’ 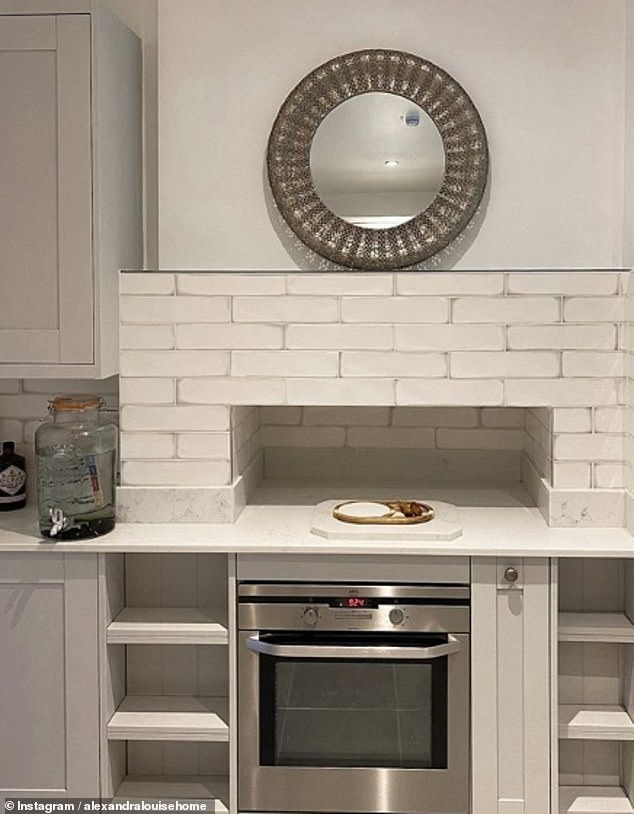 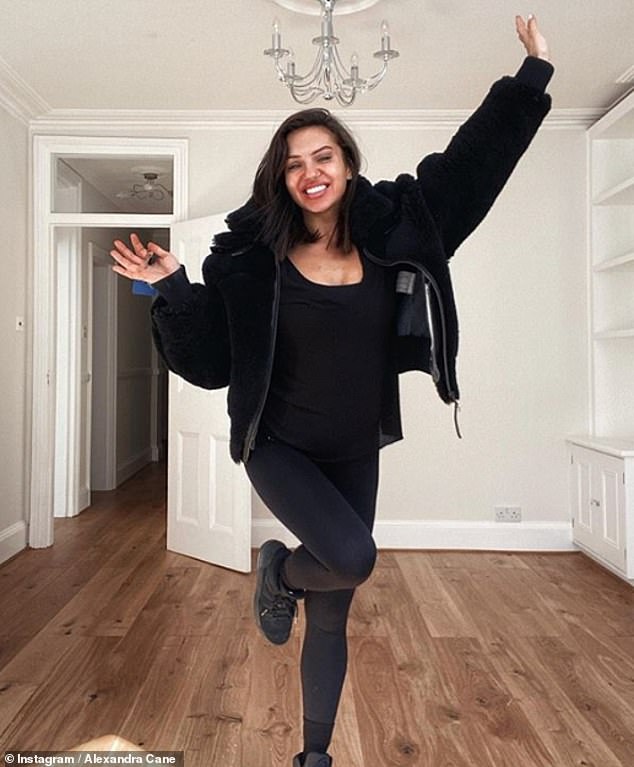 Minimalist: The star shared an excited snap of her new home, with dark wood flooring and even chandelier lighting

She added: ‘Luckily it’s been winter so I’ve been able to get away with wearing my baggy jumpers and things. But all my clothes don’t fit me anymore. They’re literally hanging off me.

‘So I’m gonna get a whole new wardrobe. I still have my bum and my hips. My size can fluctuate but generally now I’m a size six’

The online sensation’s app aims to help other people reach their body goals and feel happier in their own skin.

In the romance department, she is said to have called it quits from estate agent Adam Theobald in December, with an insider claiming they’re still on talking terms.

According to The Sun, Alexandra is believed to have initiated the break-up from the sales negotiator – who she went public with on Valentine’s Day. 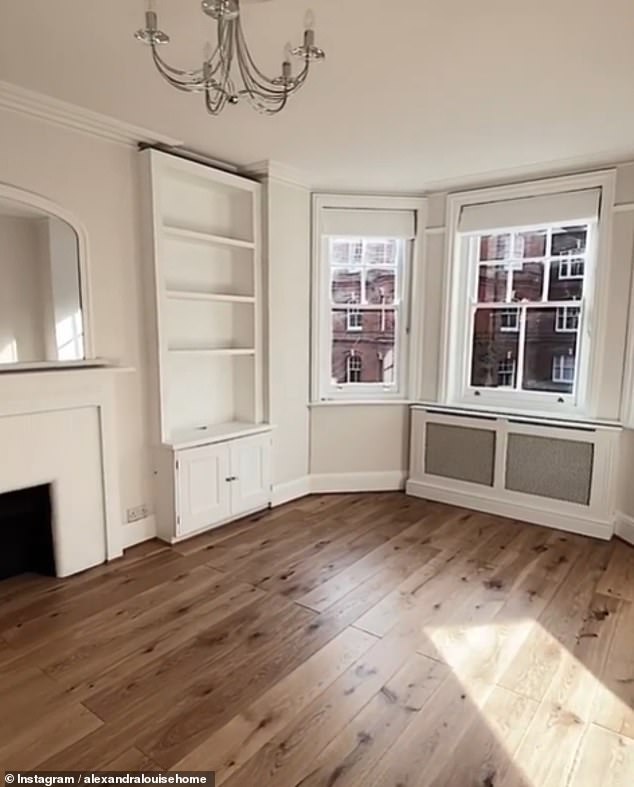 Where’s the sofa? It seems that Alexandra’s flat is still in the midst of its transformation, as she shared snaps of the open empty rooms