Ireland Baldwin was left red faced on Sunday afternoon as she enjoyed a day at the beach in Malibu.

The 24-year old showed off her womanly curves in a mismatched bikini that, at times, needed constant attention following a few mishaps where her ample assets nearly fell out out of her top for all to see.

Emerging from the ocean, she was seen laughing self-consciously as she cupped her hands over her chest following the potentially awkward accident. 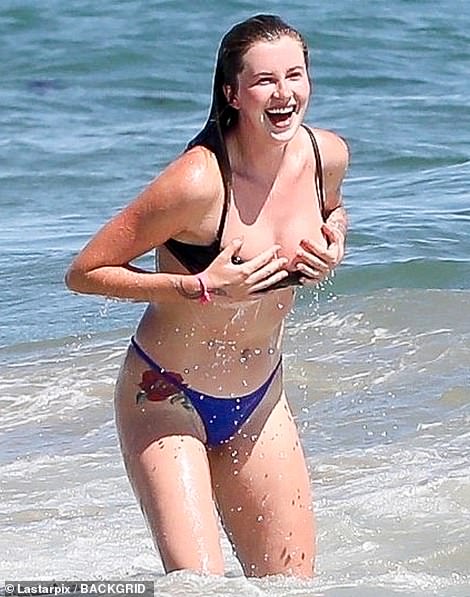 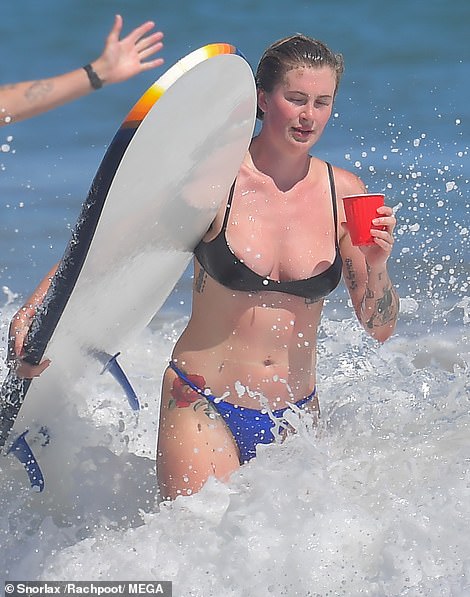 Whoops! Ireland Baldwin had to cover up her cleavage after her top nearly fell off while surfing the bustling waves of Malibu on Sunday

Baldwin, who is the daughter of actors Alec Baldwin and Kim Basinger, donned a black bra-style top with a blue thong-style bottom.

But it turns out the skimpy ensemble was no match for the bustling waves when the leggy 6ft 1in social media influencer decided to get in some surfing with a few gal pals.

On one occasion, she slowly made her way into the water and onto her board, all while keeping an eye on the velocity of the crashing waves. 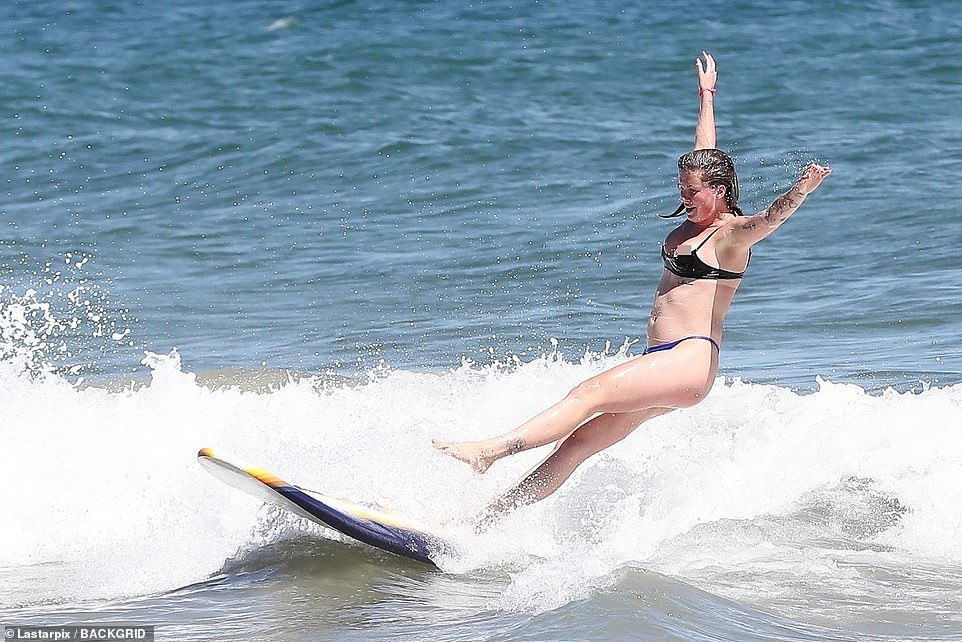 Fun in the sun: The near-mishap for the model and actress happened when she wiped out after riding a wave with some friends 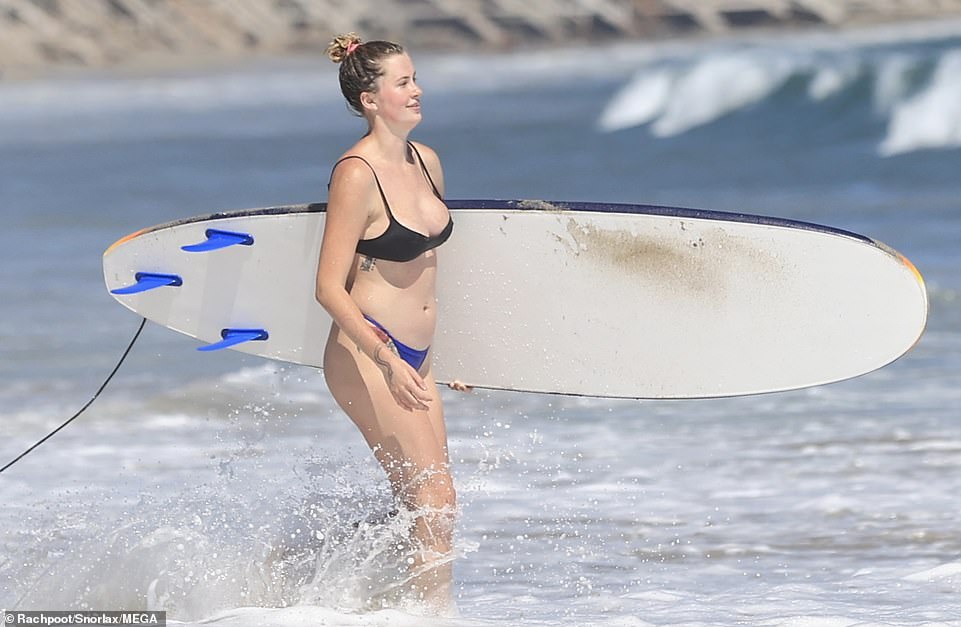 Baldwin, who is the daughter of actors Alec Baldwin and Kim Basinger, donned a black bra-style top with a blue thong-style bottom 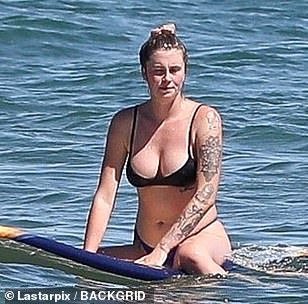 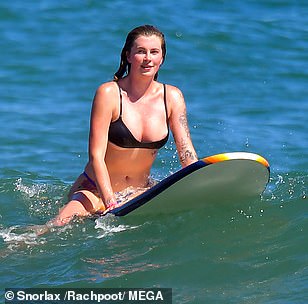 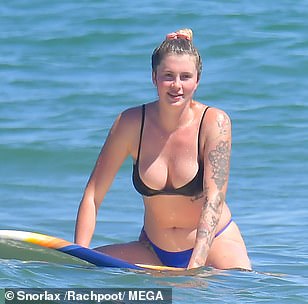 Surveying the scene: The model patiently waited for the right wave with some pals 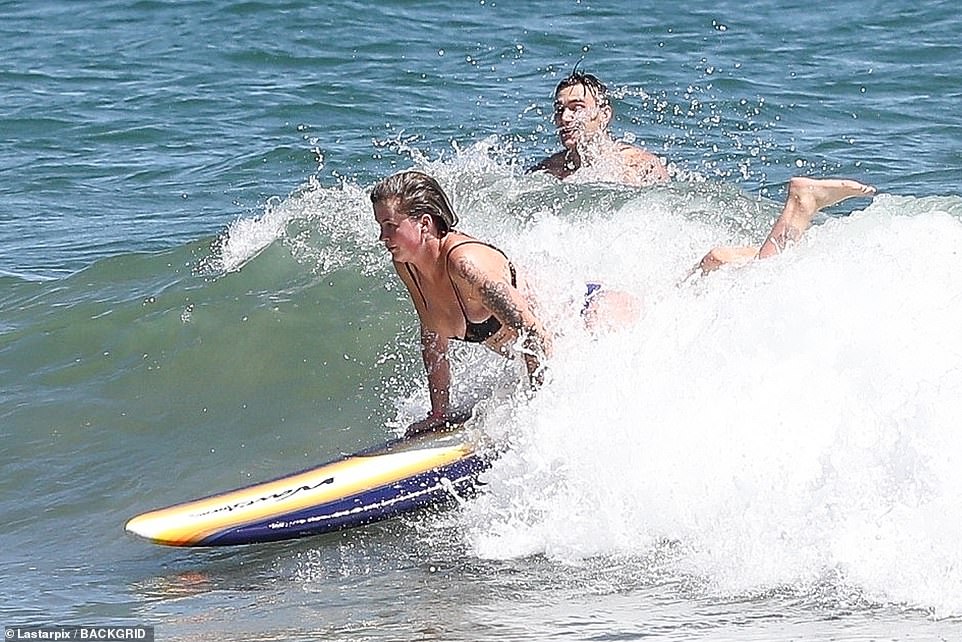 She’s got it: Her patience paid off when hit hit just the right wave 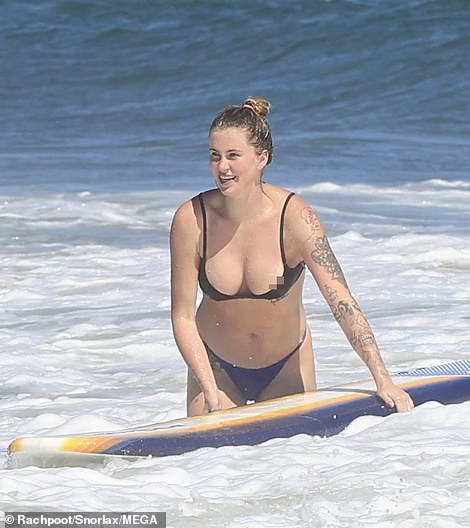 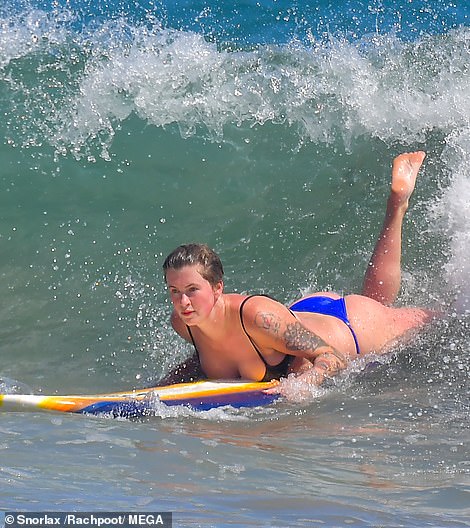 One with mother nature: The model showed off her skills during several rides on the waves 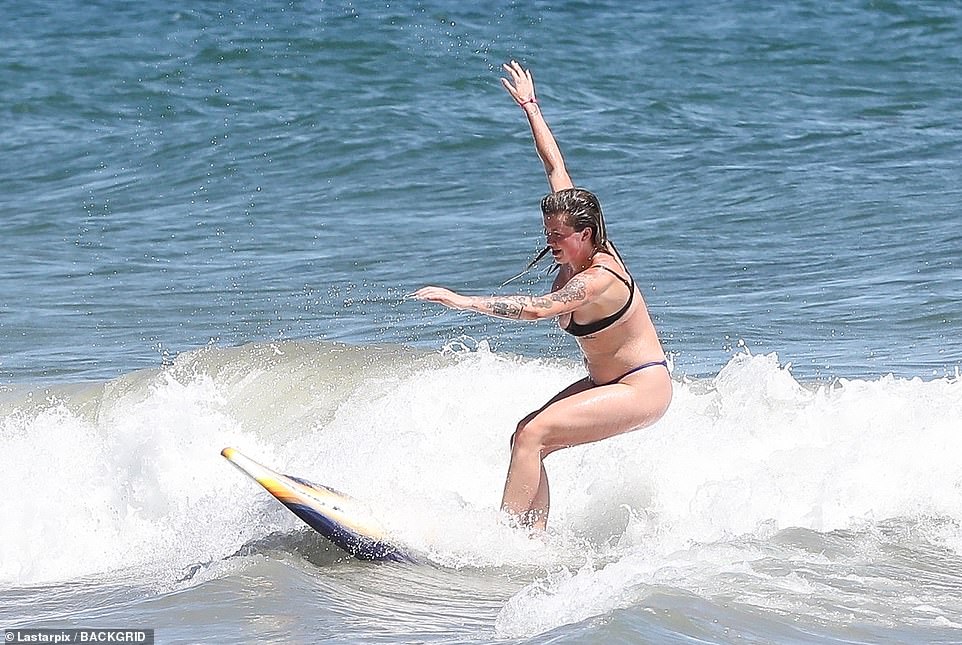 One with nature: The social media influence showed off some good surfing skills before wiping out and having her top nearly fall off

Within moments, Baldwin showed off her skills when hopped on a good wave and rode it out, until she wiped out just before hitting the shoreline.

By the time Baldwin reappeared from under the water, she had a big beaming smile on her face, and both hands covering her breasts due to her top nearly falling off.

By no means deterred, Baldwin also showed off her sporty side by partaking in a friendly, but competitive, game of volleyball.

Like her time in the water, the leggy beauty was all smiles as she helped her team to a few moral victories during the matches, all while making sure her makeshift bikini stayed in tact. 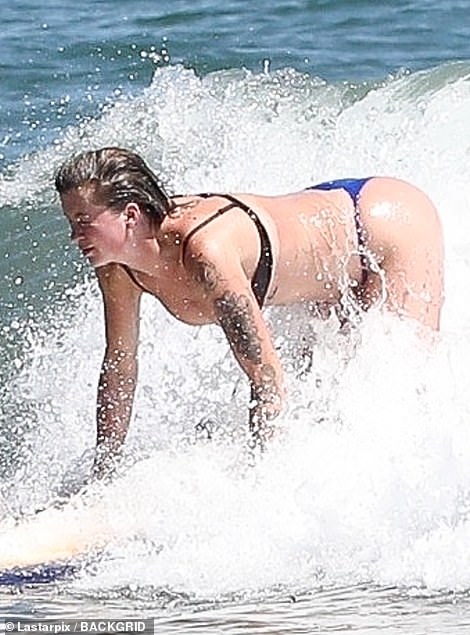 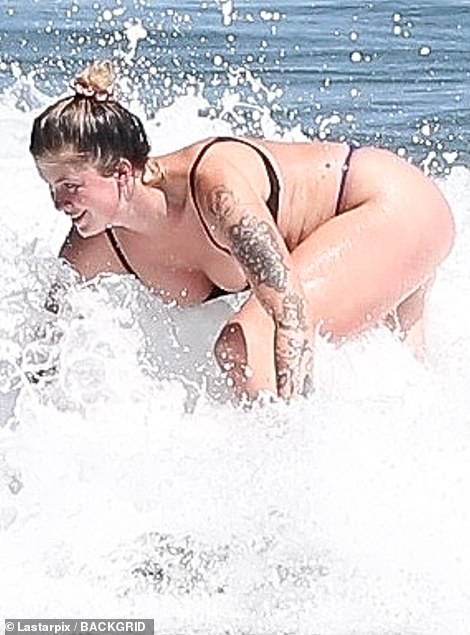 Beach babe: Ireland looked every inch the beach babe as she showed off her impressing surfing skills 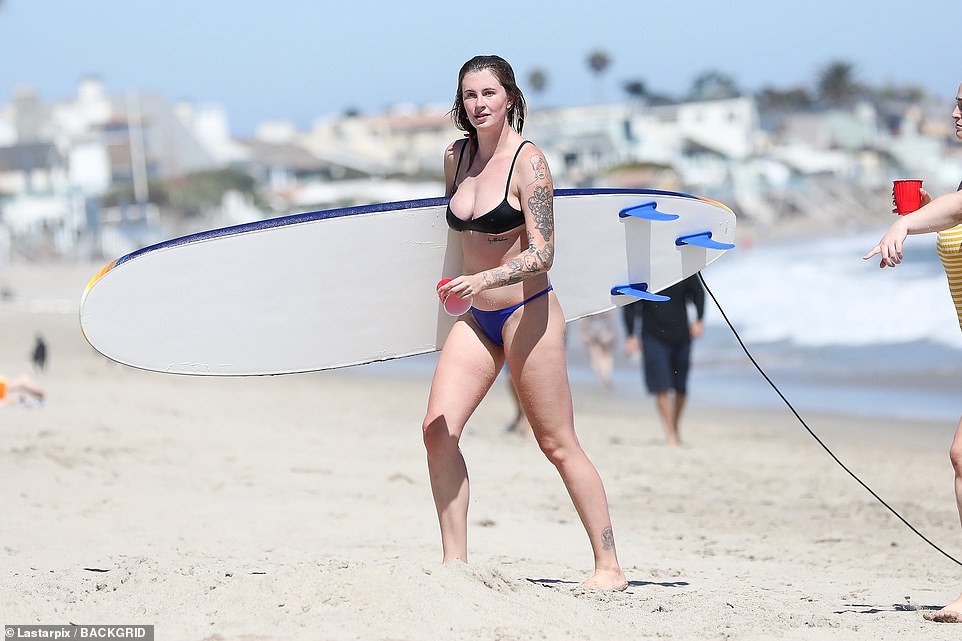 Gorgeous: The model went makeup-free as she showed off her radiant complexion on the beach 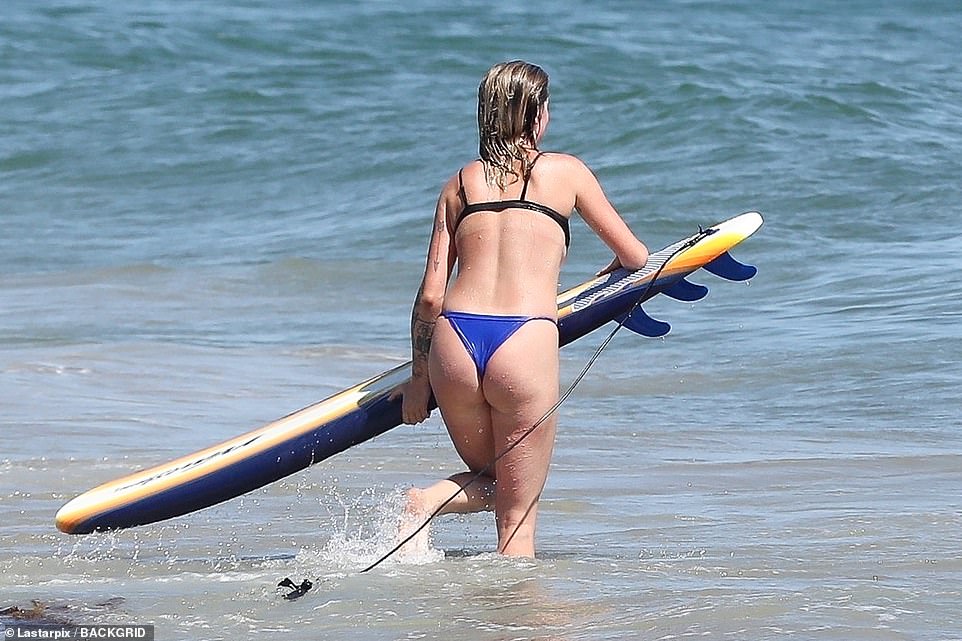 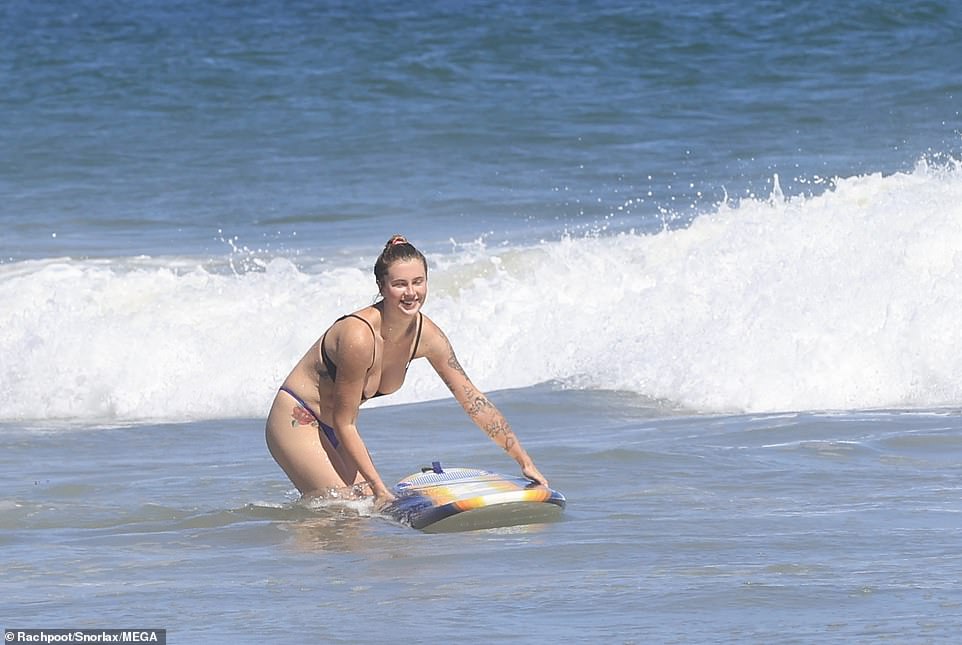 After her near bikini top mishap, Baldwin headed back to shore to play volleyball 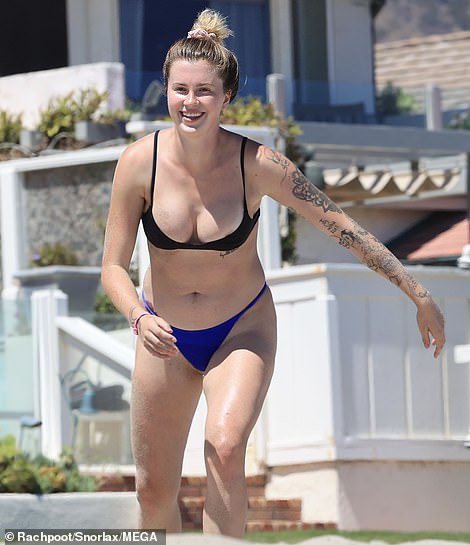 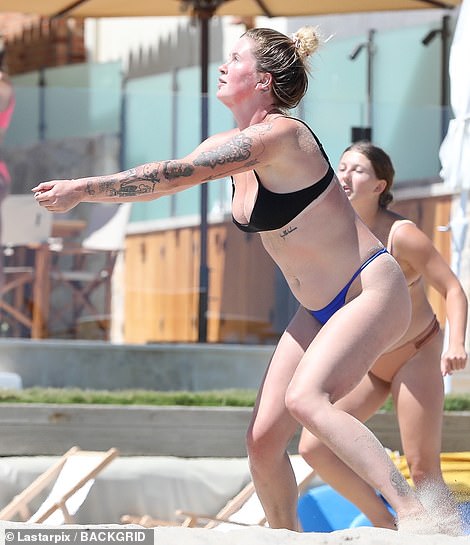 Mixing and matching: The Los Angeles native wore a mismatched bikini that consisted of a black top and blue thing-style bottoms 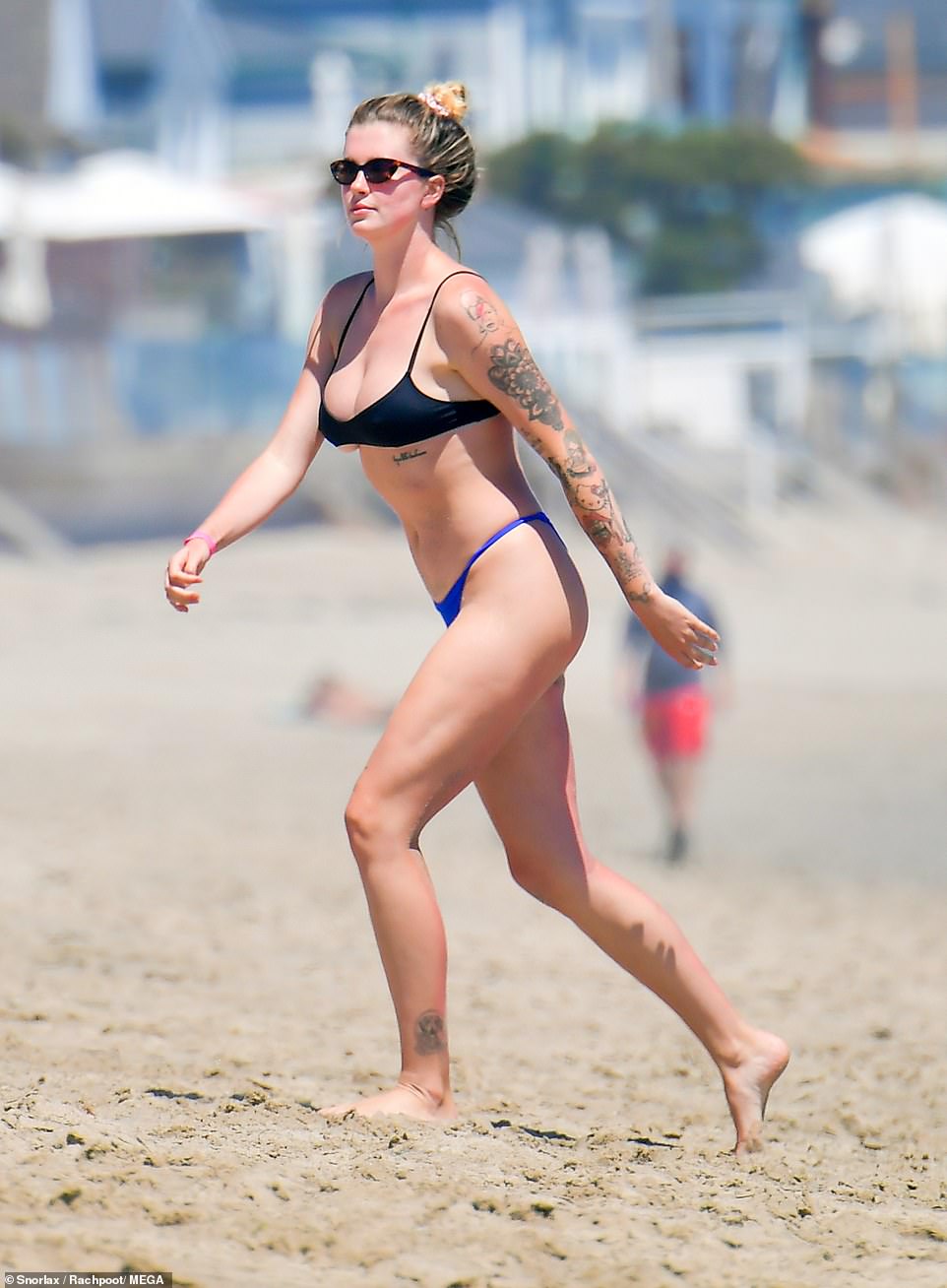 Striking: The celebrity offspring put on an unmissable show on the sand 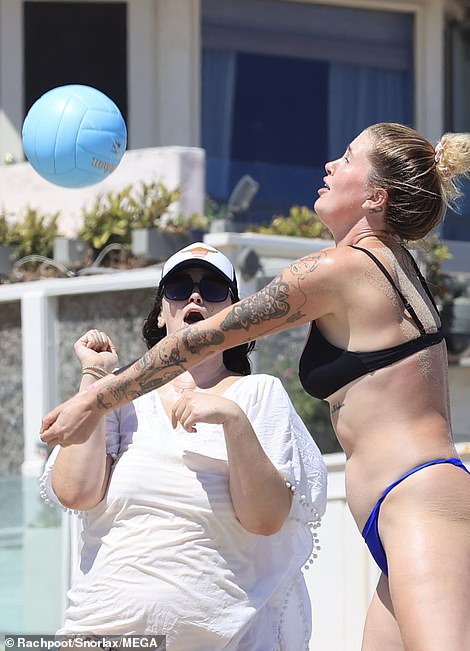 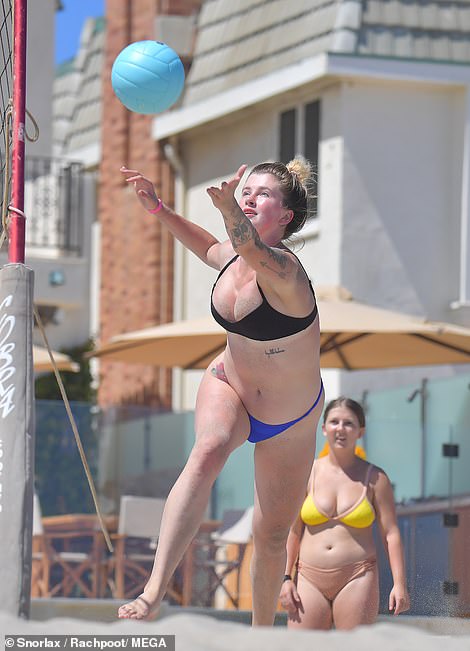 Skin art: The skimpy outfit showed off her array of tattoos as she showed her prowess op the volleyball court 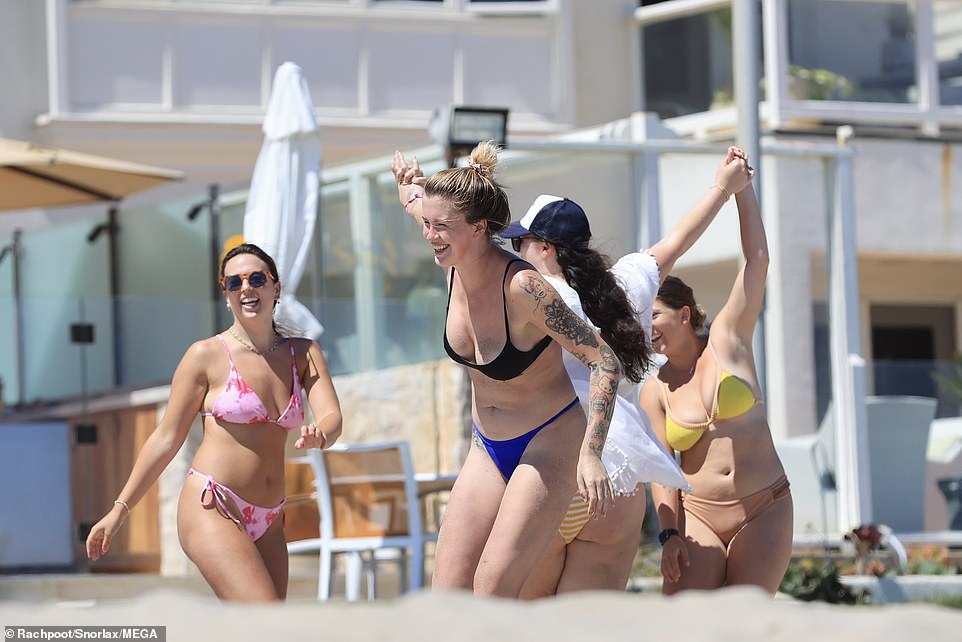 Glowing: Baldwin showed unbridled enthusiasm when she helped her team win a point

Baldwin’s fun in the sun also included plenty of food and drinks, as well as sunscreen to help protect her skin from the damages of the sun.

During the festivities, the Grudge Match actress pulled her long blonde tresses back into a loose top ponytail.

Baldwin has been seen at the beach in Malibu several times this past week, which has included the likes of her boyfriend Corey Harper, 25, whom she’s been dating since 2018.

The couple have been seen enjoying each other’s company while out swimming and surfing. 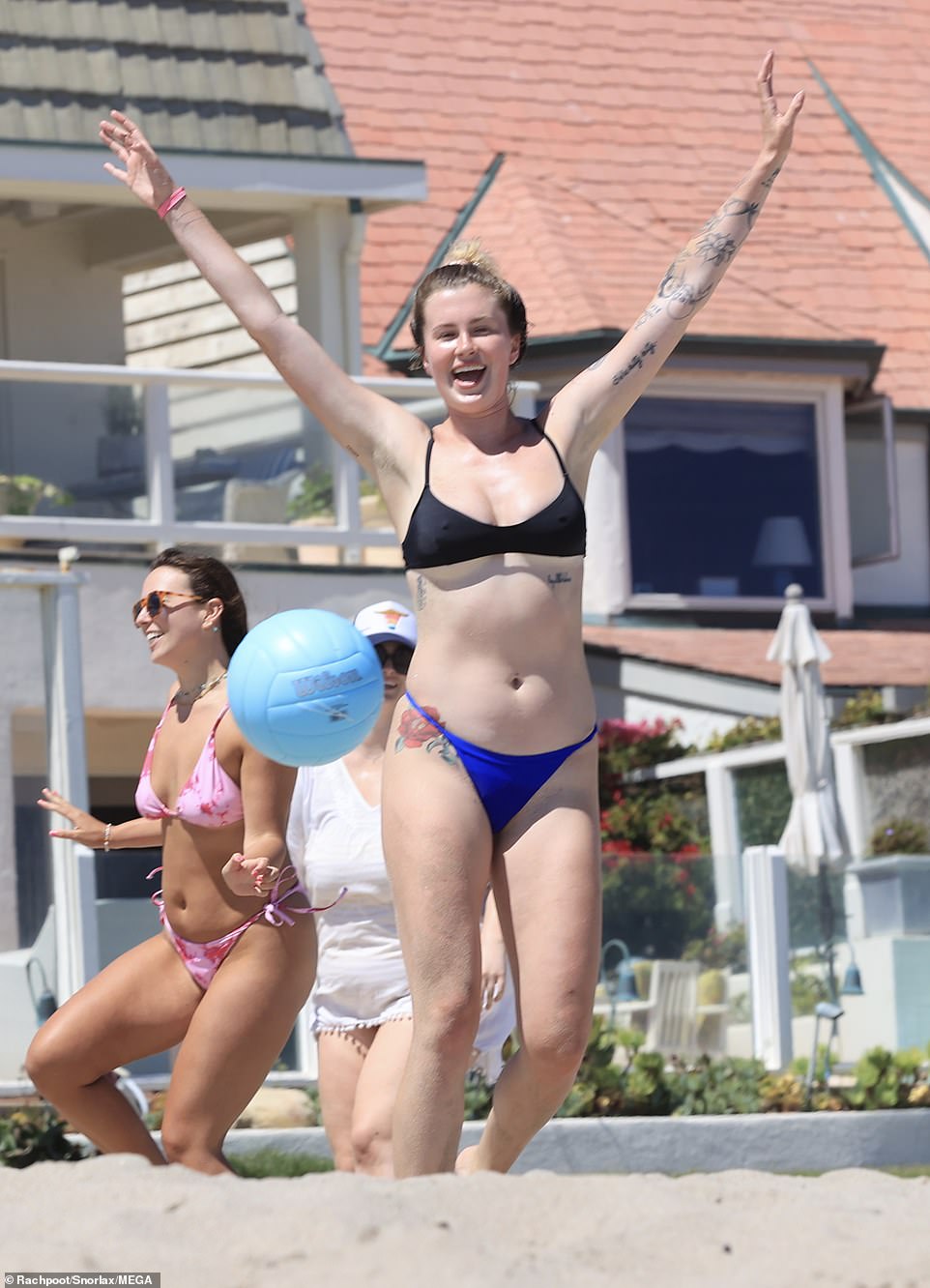 Smells like victory: Baldwin raised her arms up in victory on a number of occasions 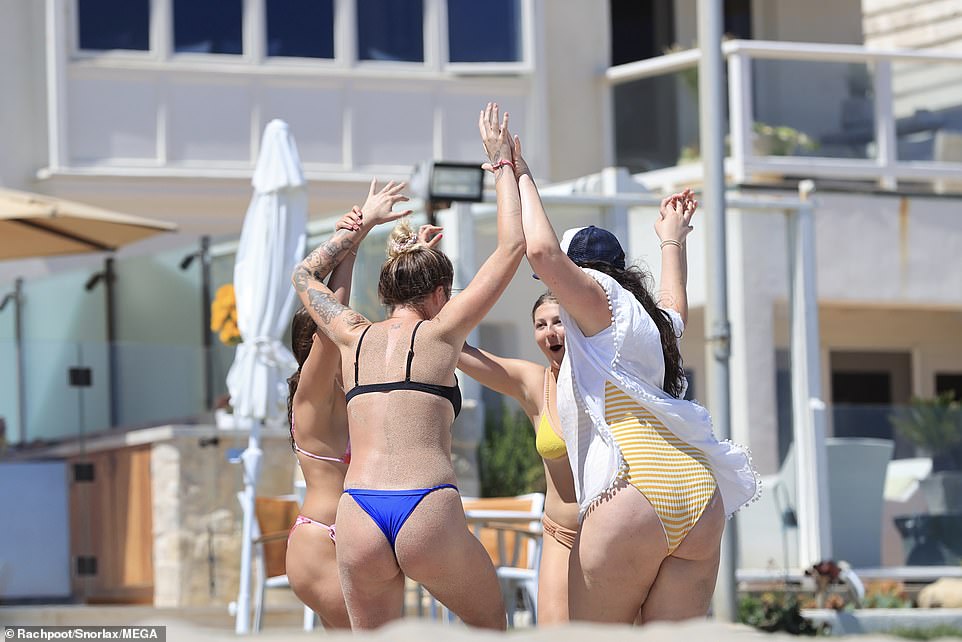 We are the champions: Baldwin’s team celebrated together after scoring a winning point 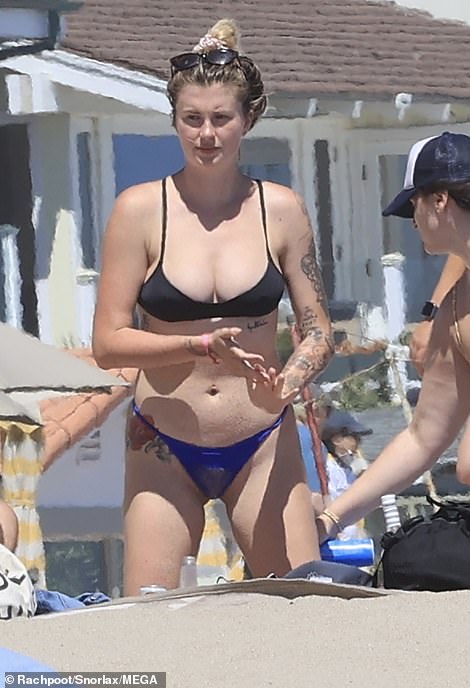 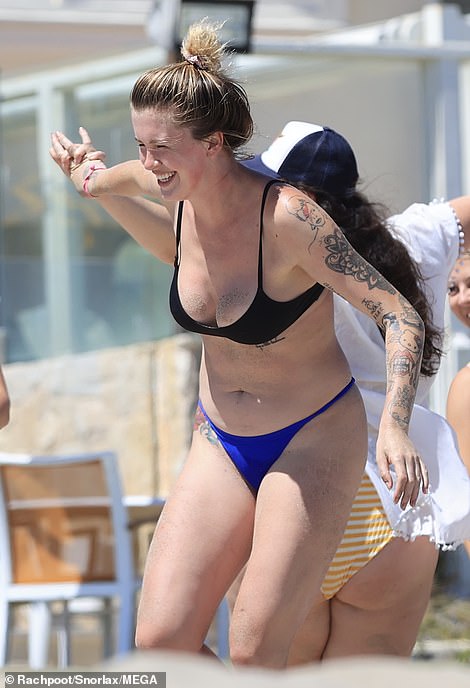 Casual cool: The model pulled her long blonde hair back into a loose top ponytail