Earlier this year, she got candid with fans about her weight, as she urged them to be ‘comfortable in [their] skin, while she vowed to embrace her ‘plus size’ frame.

And Jacqueline Jossa looked sensational, when she took to Instagram to share snaps of herself posing in flattering fitness gear on Friday evening.

The EastEnders star, 27, wowed as she posed in a tangerine crop top, which she teamed with patterned purple leggings and white trainers. 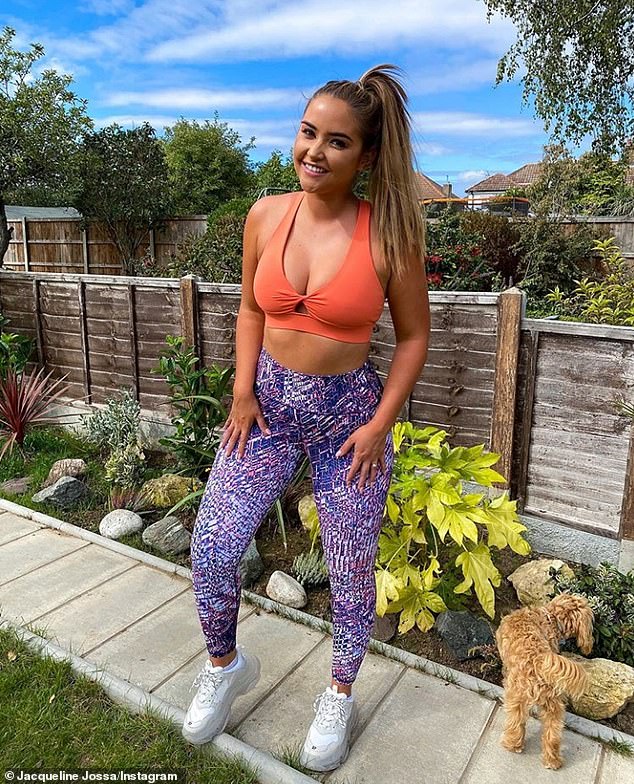 Sensational: Jacqueline Jossa looked sensational, when she took to Instagram to share snaps of herself posing in flattering fitness gear on Friday evening

Wearing her golden brown tresses in a high ponytail, the actress looked highlighted her famous good looks with an impeccably applied palette of makeup.

Initially sharing a clip on her Stories, the I’m A Celebrity… Get Me Out Of Here! victor also posted a snap on her main grid, adding the caption: ‘All the gear NO IDEA.’

Hours earlier, the mother-of-two wowed as she was seen donning a monochrome swimsuit while promoting a fake tan product. 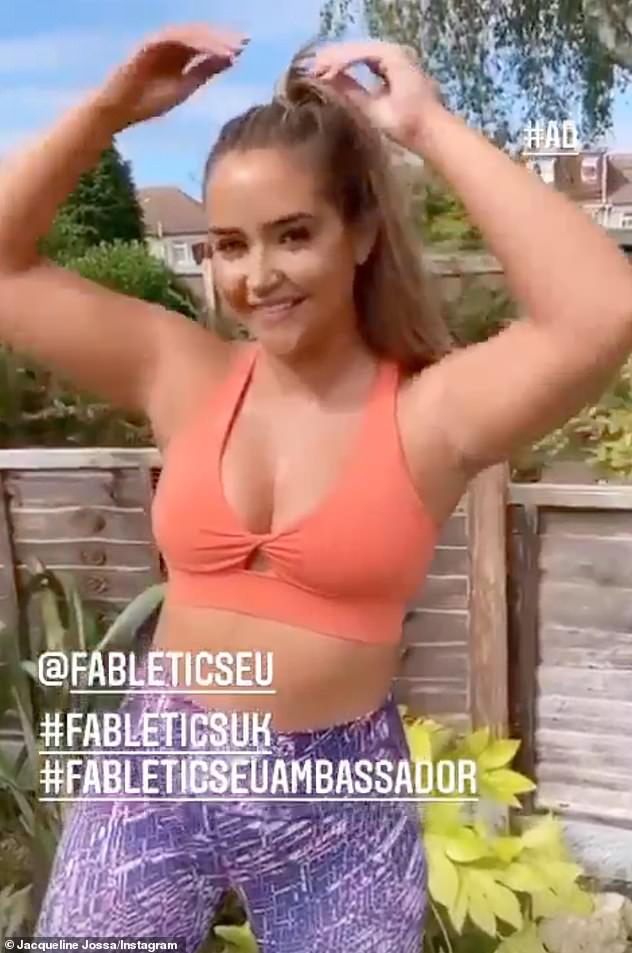 Wow: The former EastEnders star wowed as she shared a sneak peek at her Fabletics ensemble 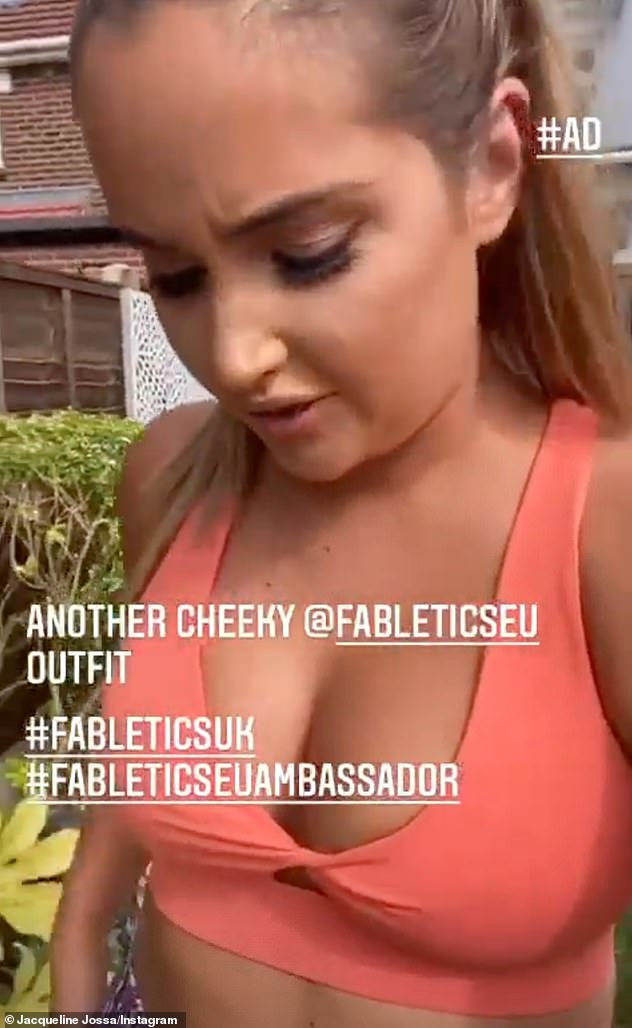 Strike a pose: The TV personality looked stunning as she posed for pictures out in the garden

Back in July, Jacqueline revealed that she finally ‘doesn’t care’ about being a size 12 to 14 as she opened about her journey to finding body positivity in an honest video.

Jacqueline said she has finally accepted her curves and embraced being a ‘plus-sized’ woman, but didn’t rule out the idea of hitting the gym.

She thanked fans for the support she received since sharing the unedited images of herself in Ibiza, admitting that she wrestled with the decision as to whether she should post them, but after doing so, she felt like a weight had been lifted.

‘It was a decision I didn’t take lightly,’ she said. ‘But I’m glad I did it, it takes the edge off. If unflattering photos of me go out I just don’t care… I feel like you have got to take the narrative of your own story.’ 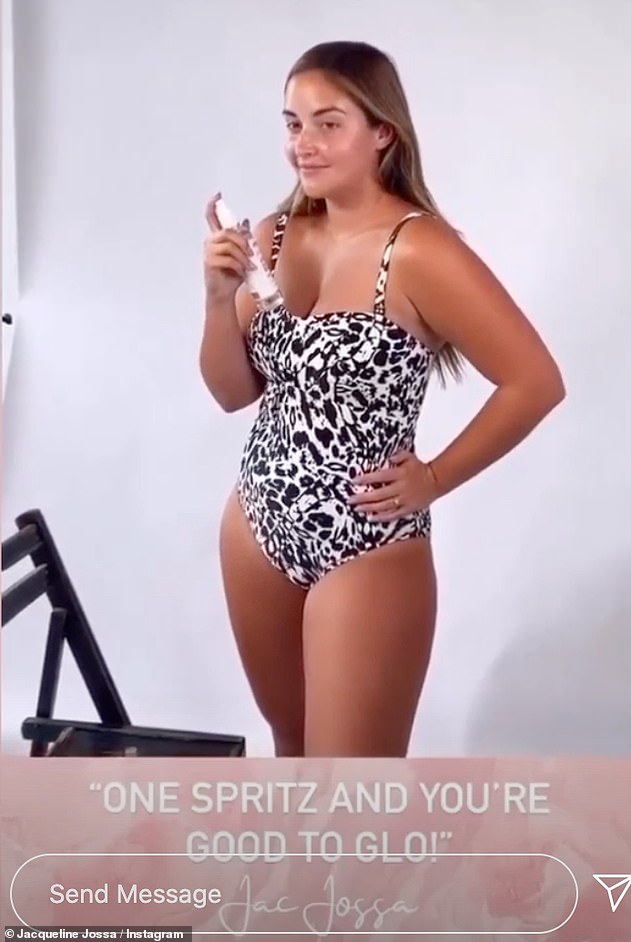 Tanned and deliver: Hours earlier, the mother-of-two wowed as she was seen donning a monochrome swimsuit while promoting a fake tan product 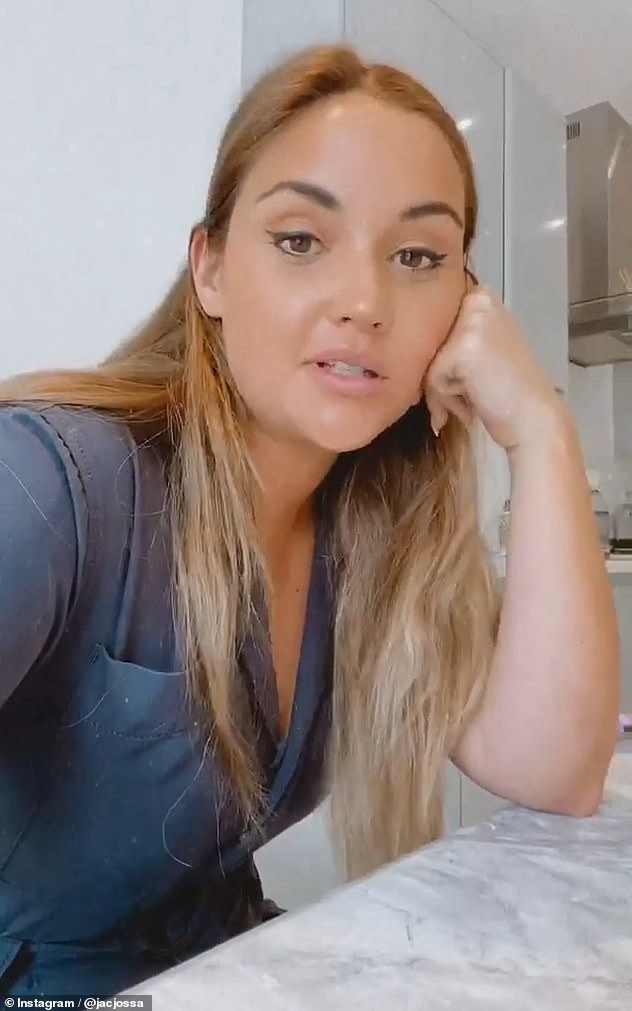 Candid: Back in July, Jacqueline revealed that she finally ‘doesn’t care’ about being a size 12 to 14 as she opened about her journey to finding body positivity in an honest video

‘The truth is I don’t care I’m not a model size 8. I did used to be. I absolutely loved being size 8 but now I’m a size 12, sometimes size 14 in bottoms because of my big legs and bum. That’s actually OK because I’ve never seen it as a plus size.

‘Everyone should feel comfortable in their own skin. It makes me feel really sad that there’s people out there who think they can’t post bikini shots because they have a few rolls or they’re a bigger size than somebody else is.’

She added: ‘I never really had a huge problem with being bigger. I really do just think you are who you are. I hate the word plus size, but if I am plus size I’m here for it.’

Jacqueline also took a moment to celebrate women of all sizes as she doesn’t rule out the possibility of dropping a dress size or two in the future.

‘If the day comes, and it comes to it and I want to go to the gym, and I want to work out. Maybe I will and I’ll go down to a size ten, but I really don’t care.’ 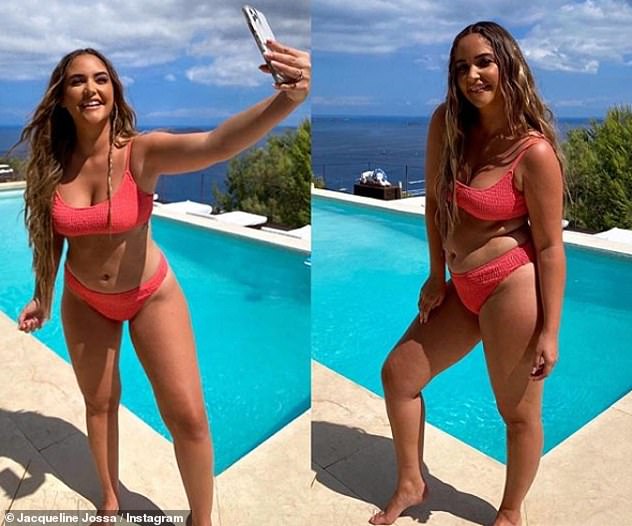 Acceptance: The I’m A Celebrity winner, 27, has finally learnt to love her killer curves as she proclaimed in a touching social media post that ‘EVERY body is a bikini body’ 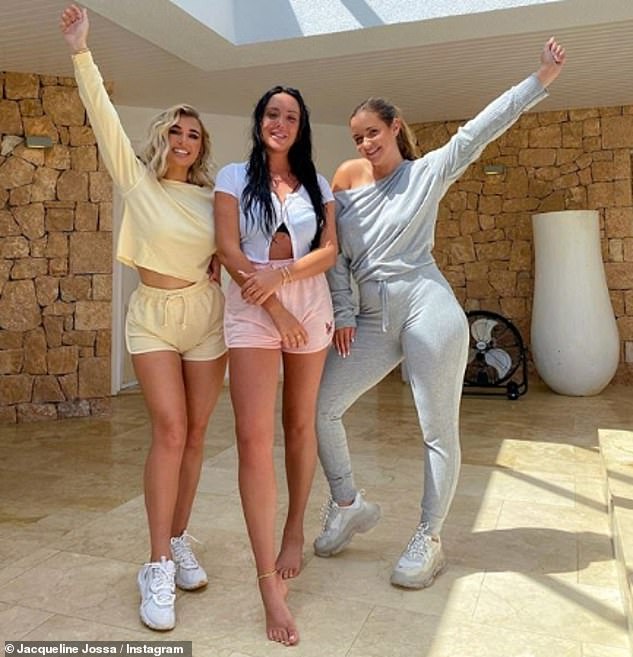 Squad goals: Jacqueline visited Ibiza for a shoot for her In The Style range this summer and was accompanied by celebrity pals, including Billie Faiers (left) and Charlotte Crosby (middle)

In the caption for her unedited bikini photos shared earlier that week in the summer, Jacqueline wrote: ‘It’s taken a while but I’ve learnt to love both angles.

‘You guys know me by now and I’m as normal as they come. I’m a working mum and a size 12 and I can’t walk around looking perfect all the time and I’ve accepted that’s completely fine.

‘So this is just a little reminder to all us women that EVERY body is a bikini body and the perfect instagram pics we see isn’t always the reality, sometimes it’s just good lighting and good angles!’

Oh no: The actress revealed that she previously turned down the opportunity to work with In The Style as she didn’t feel comfortable shooting in a bikini

Jacqueline divulged that she had previously turned down work because she felt uncomfortable being photographed in a bikini.

She said: ‘I also had turned down the chance to do a swimwear range with @inthestyle earlier this year as perhaps wasn’t comfortable shooting it….

‘But I changed my mind & decided I wanted to create something I was comfortable with and only wanted to shoot it if we could keep it real and honest.’

Her authentic message received universal praise from fans who found it refreshing to see a celebrity who doesn’t fit into the size eight cookie-cutter mould. 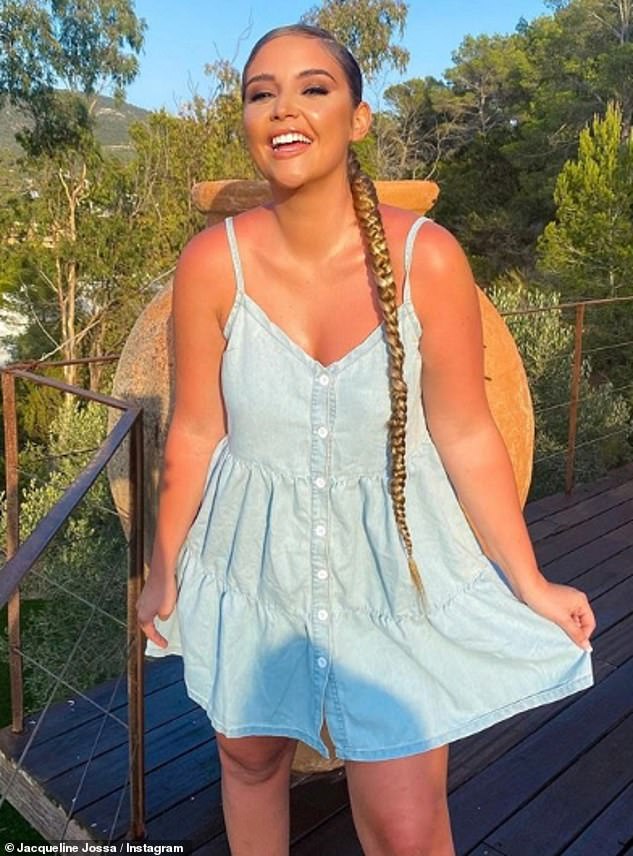 Beauty: The star looked radiant on her summer trip as she posed in a range of summer dresses