She has jetted to Ibiza to shoot a fashion campaign with Charlotte Crosby and Billie Faiers at a luxury villa.

And Jacqueline Jossa continued to soak up the Spanish sun in a sizzling social media snap uploaded on Tuesday.

The former EastEnders actress, 27, put on an eye-catching display in an orange cut-out swimsuit that flaunted her toned midriff. 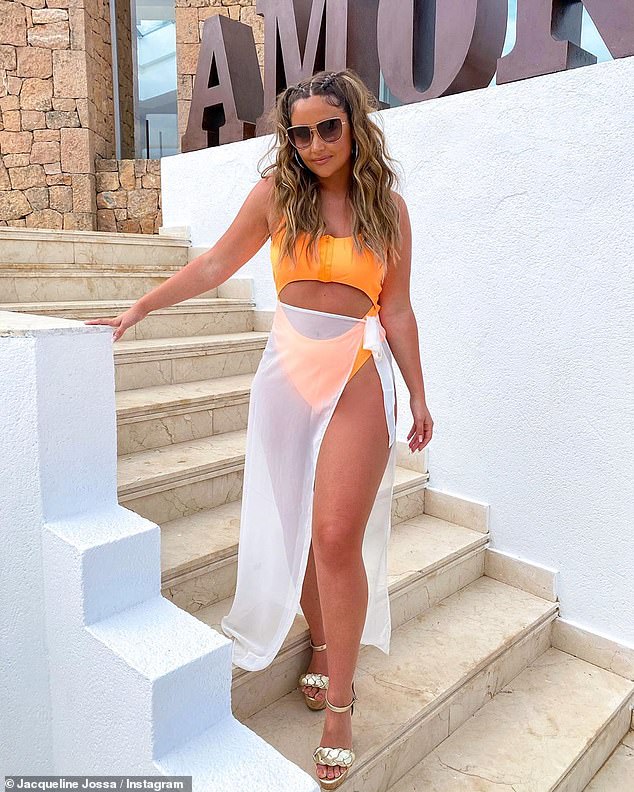 Flawless: Jacqueline Jossa put on an eye-catching display in an orange cut-out swimsuit as she continued to soak up the sun in a sizzling social media snap on Tuesday

She finished the look with a white sarong tied around her waist, a pair of statement sunglasses and gold wedge heels.

Jacqueline wore her brunette tresses in two braids across her scalp before styling the rest in loose beach waves.

The soap star posed up a storm on a set of steps leading to the villa with large letters spelling ‘amor’ in the background. 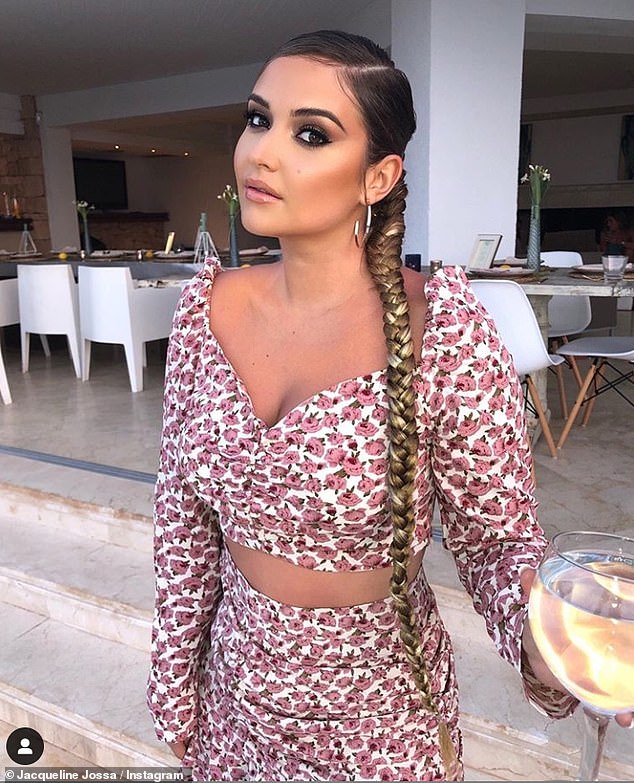 Wow: On Monday Jacqueline was one of the guests of honour at a villa party held by clothing brand InTheStyle and debuted a stunning new look 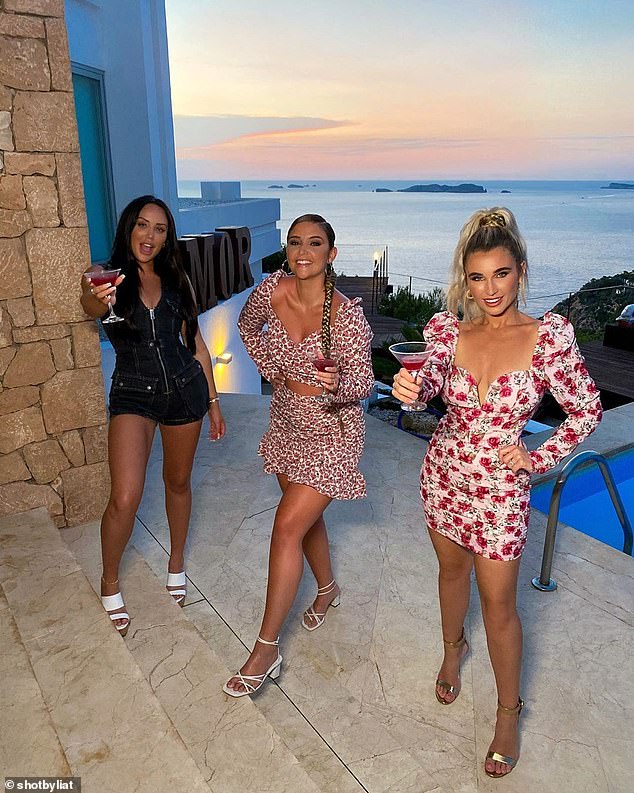 Beaming: Charlotte Crosby, Jacqueline and Billie Faiers have all jetted out to Ibiza as they prepare for a luxury photoshoot at a sprawling seaside villa

On Monday Jacqueline was one of the guests of honour at a villa party held by clothing brand InTheStyle and debuted a stunning new look.

Jacqueline wore her caramel flecked brunette tresses in a intricate waist-length braided style as she enjoyed a glass of wine.

The beauty sported smoky shadow, fluttery lashes and rose gloss as she posed.

The star looked stylish in rose and white floral co-ords, with a crop-top teasing a glimpse of her toned midriff. 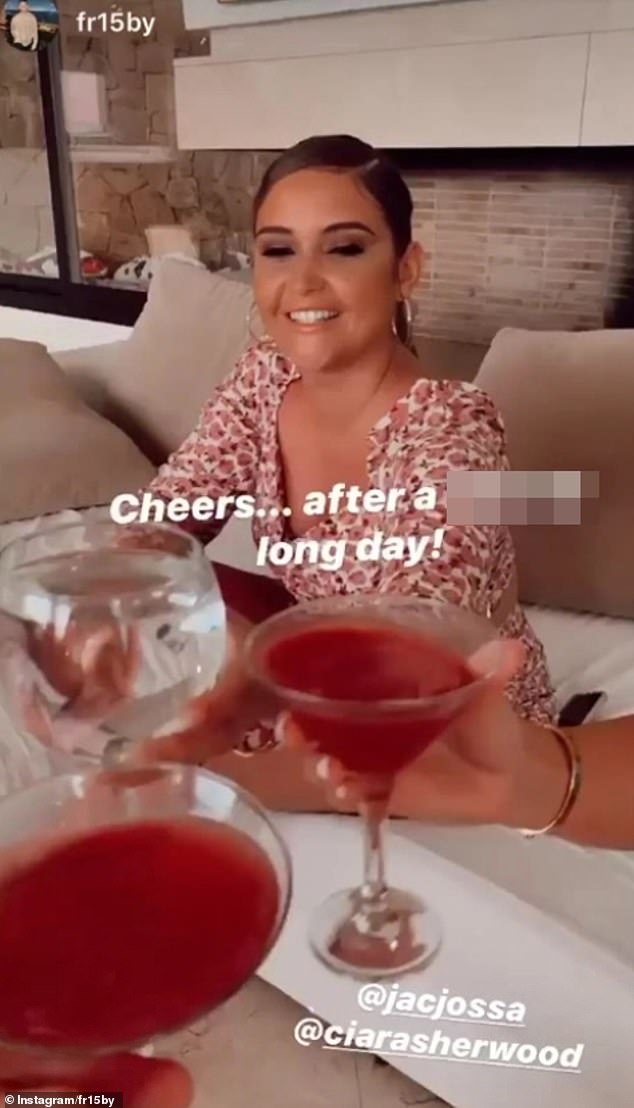 Cheers: Jacqueline clearly had a fabulous time at the beachside villa as she enjoyed some fruity cocktails

Jacqueline clearly had a fabulous time at the beachside villa as she enjoyed some fruity cocktails, a grazing platter and a live DJ set.

She also took to Instagram to model a variety of summer dresses.

Billie, 30, was joined by her husband Greg Shepherd at the soiree, while Charlotte, 30, posted some sultry snaps of her own.

The trio headed out to the Spanish Island on Sunday evening ahead of a shoot with the clothing brand.

Earlier this month Jacqueline and husband Dan Osborne proved their relationship was firmly back on track despite speculation as they enjoyed a day of strawberry picking with daughters Ella, five, and Mia, two.

The star beamed with happiness as she posed for sweet pictures with her husband and their girls. 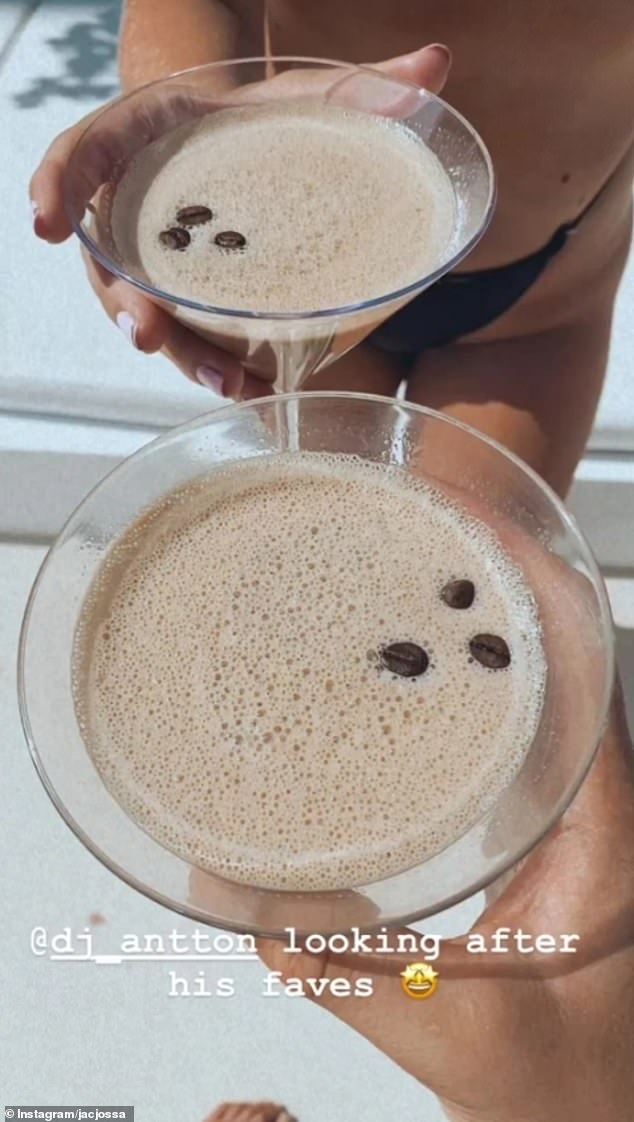 Espresso martinis: The star sipped on some more cocktails by the pool 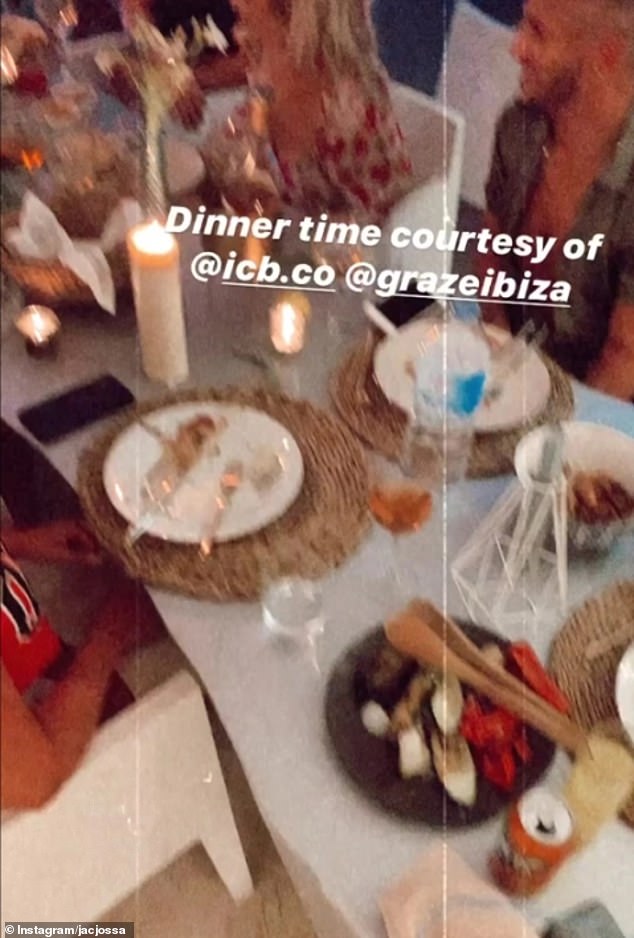 Food time: The star shared a video of a grazing platter at the dinner table 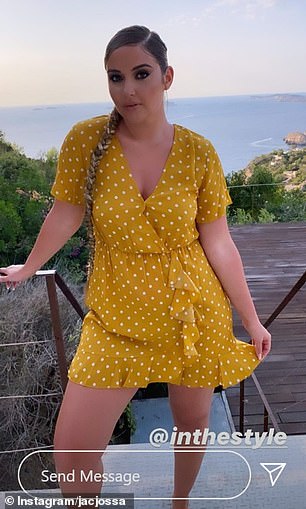 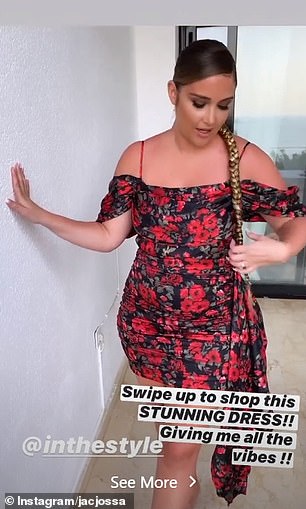 Style star: Jacqueline modelled a selection of dresses on her Instagram

Back in May, it was reported that Dan ‘begged’ Jacqueline to return to their marital home after she moved out amid their marriage issues. She revealed she had moved back into their abode part-time amid claims they had been ‘fighting non-stop’.

It was then reported that Dan ‘begged’ Jacqueline to come home and she is adamant they can ‘make it work’ as they make a ‘good team’.

The actress was said to have missed her husband and wants to take things ‘really slowly’ now she has returned part-time. She will split her time between their marital home and her parents’ house. 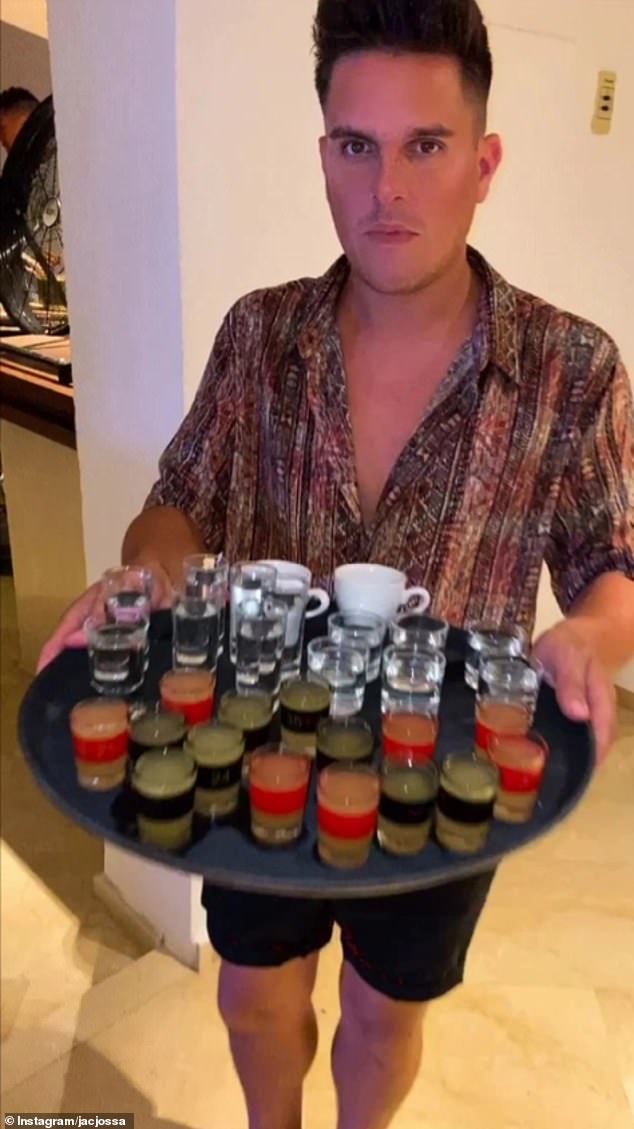 Shots o’clock: There were fruity shots at the glittering party 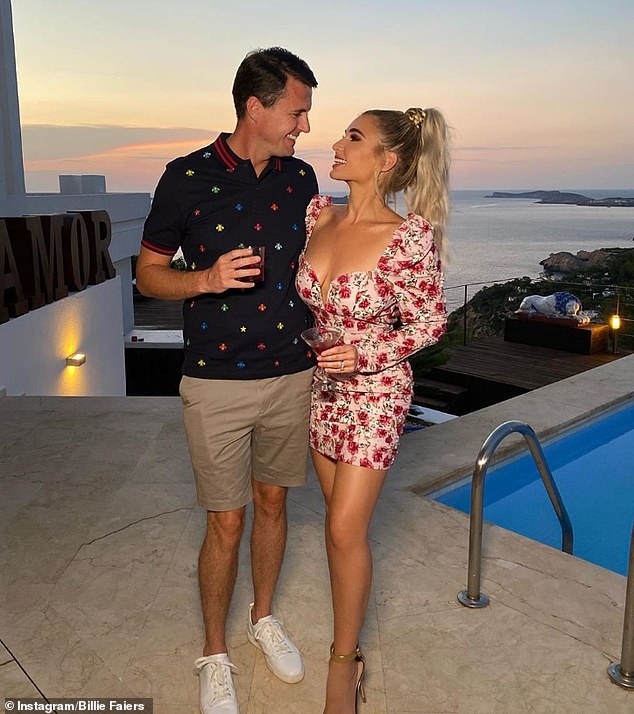 Smitten: Billie was joined by husband Greg Shepherd at the villa 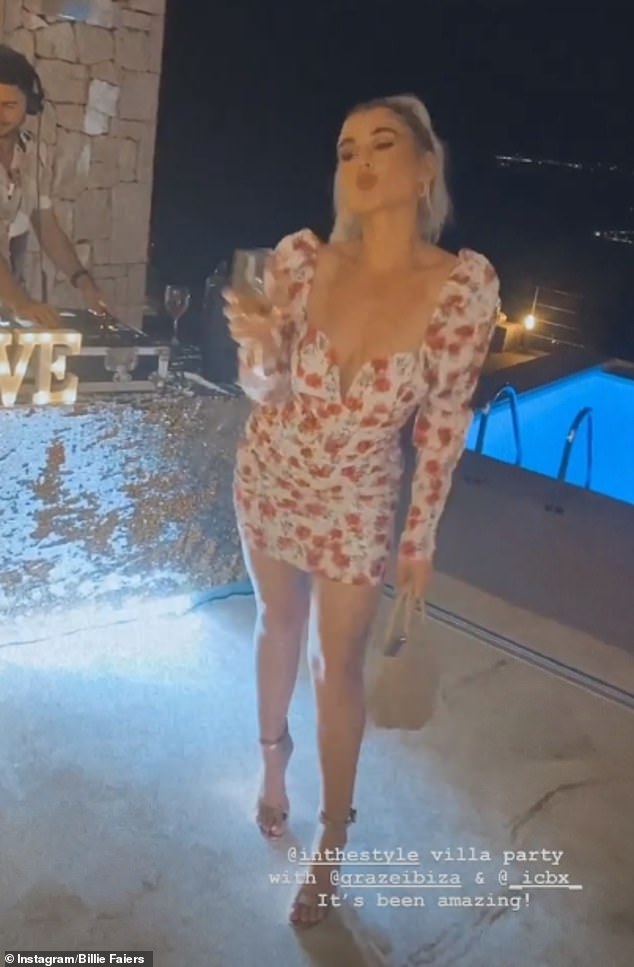 Pouty: Billie blew a kiss as she posed up at the villa in Ibiza

A source said: ‘Dan begged her to come home and she’s admitted she missed him. They had been fighting non-stop but together they make a good team. It won’t be easy but Jacqueline’s sure they can make it work. She wants to take it slowly.’

MailOnline contacted Jacqueline and Dan’s reps for comment at the time.

The couple’s relationship has been plagued with cheating allegations and tensions between the pair have reportedly been taking their toll.

But Jacqueline recently took to Instagram to clear up the rumours, stating: ‘I need some time. There is no split. No divorce. We are working together not against each other’, before she returned to their home, where they now remain. 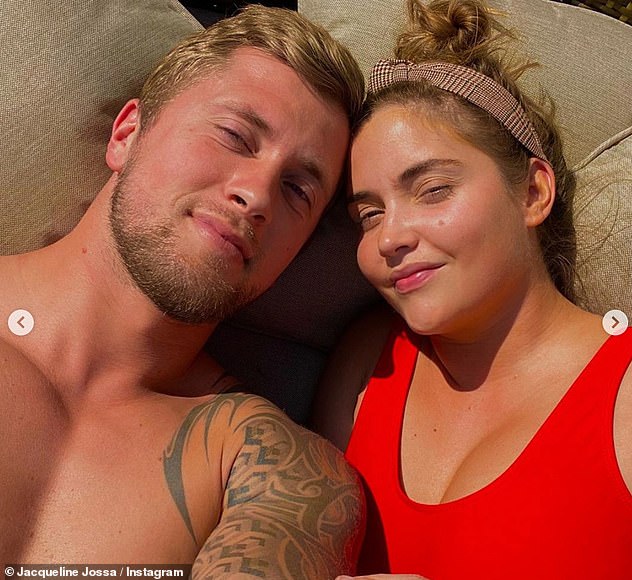 Drama: Earlier this month Jacqueline and husband Dan Osborne proved their relationship was firmly back on track despite speculation