Jennifer Lopez and Ben Affleck couldn’t contain their passion when she visited him on the set of his newest film on Wednesday.

The 52-year-old singer and actress and the 49-year-old actor-turned-director embraced for a loving kiss during downtime on the studio lot.

Ben was on the job in Santa Monica, California, as he films a still-untitled film about Nike’s quest to get Michael Jordan to wear its shoes, which he is directing in addition to co-writing with his longtime friend and collaborator Matt Damon. 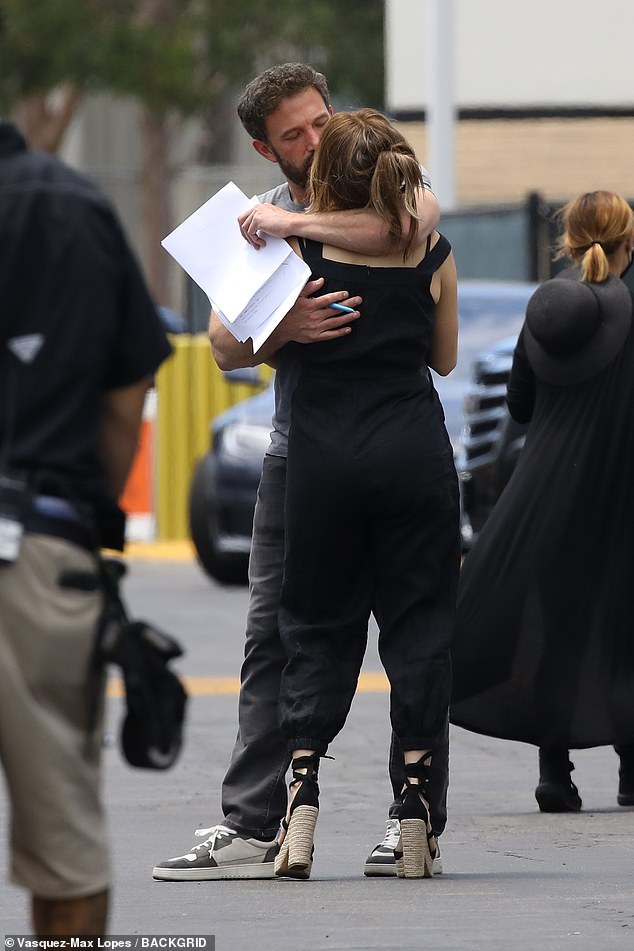 Embraces: Jennifer Lopez, 52, and Ben Affleck, 49, shared a passionate kiss as he wrapped his arms around her on the set of his untitled Nike film in Santa Monica on Wednesday

Ben and Jennifer showed they haven’t tired of PDA yet as he wrapped his muscular arm around her while she clutched at his torso with both arms.

She was dressed in a casual-chic sleeveless black jumpsuit with thick straps and drawstrings around her waist that emphasized her hourglass figure.

The If You Had My Love singer elevated her 5ft5in stature with a set of platform wedges with black ribbons crisscrossing up to her ankles.

Her brunette hair was tied up in a stylishly messy bun while thick strands were left free to frame her modestly made-up face, gold hoop earrings and cool amber-tinted aviator sunglasses. 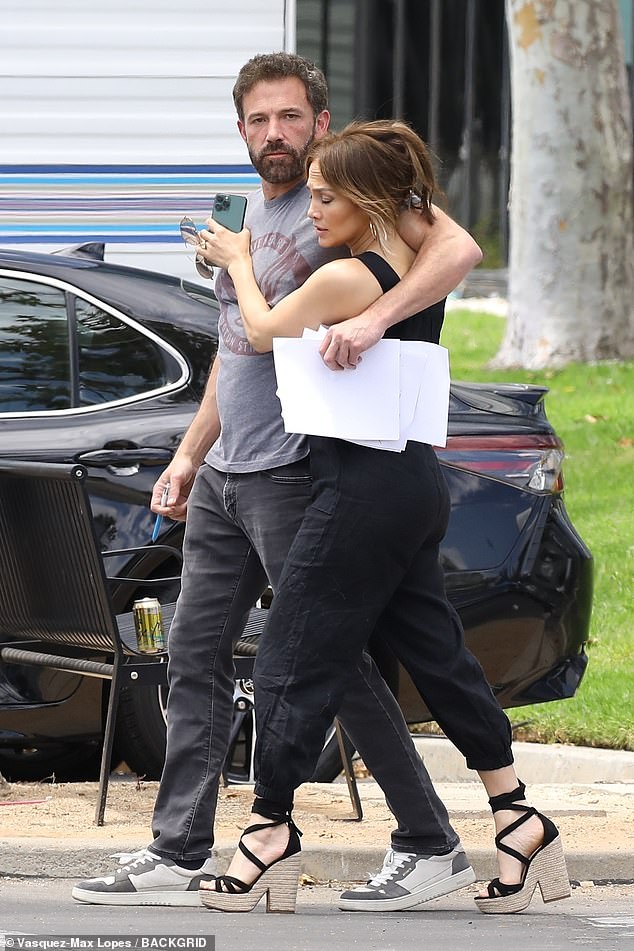 Inseparable: Ben and Jennifer showed they haven’t tired of PDA yet as he wrapped his muscular arm around her while she clutched at his torso with both arms 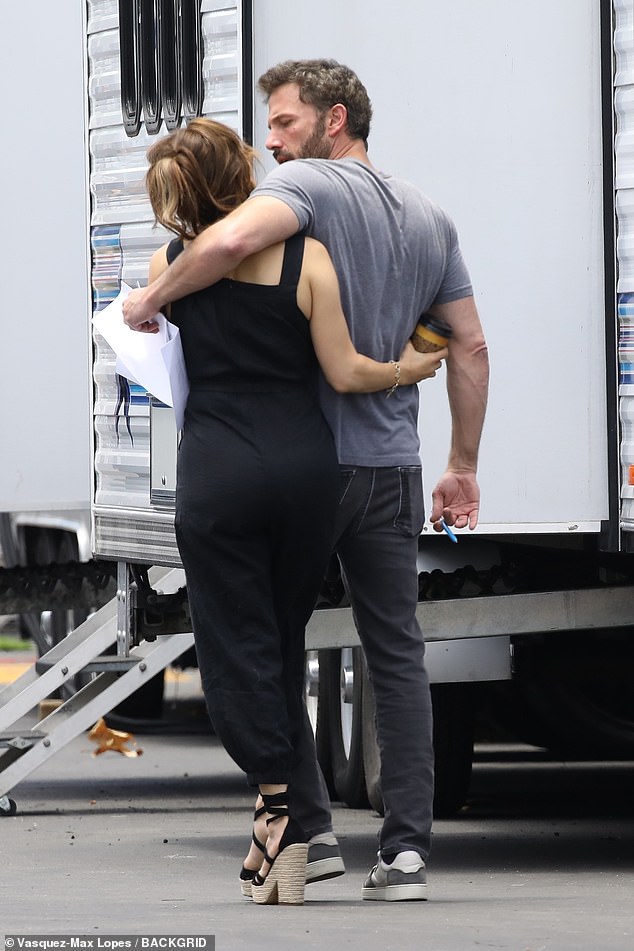 Stunner: She was dressed in a casual-chic sleeveless black jumpsuit with platform wedges and gold hoop earrings

Her fiancé Ben stuck with a gray graphic T-shirt and slim black jeans with gray-and-white sneakers.

He carried one of his standard enormous iced coffees as he met his love on the lot, while she brought along a more modestly sized hot coffee for a pick-me-up.

Jennifer has lately been making regular visits to the set around lunch time, where Ben is working closely with his friend Matt.

The two most recently worked together on The Last Duel, a historical drama about the last legally sanctioned trial by combat in France, which Matt starred in with Adam Driver, while Ben played a major supporting part.

The former collaborators wrote the screenplay together with Nicole Holofcener, and it marked their first duel writing project in more than two decades, after they won the Best Original Screenplay Academy Award for their 1997 film Good Will Hunting.

‘The process on The Last Duel was different because we’re different people and we’ve grown a lot and have been through a lot,’ Ben told Good Morning America around the time of The Last Duel’s release.

Casual-chic: She rocked cool aviator sunglasses and had her hair tied up in a messy bun. Her fiancé Ben stuck with a gray graphic T-shirt and slim black jeans with gray-and-white sneakers 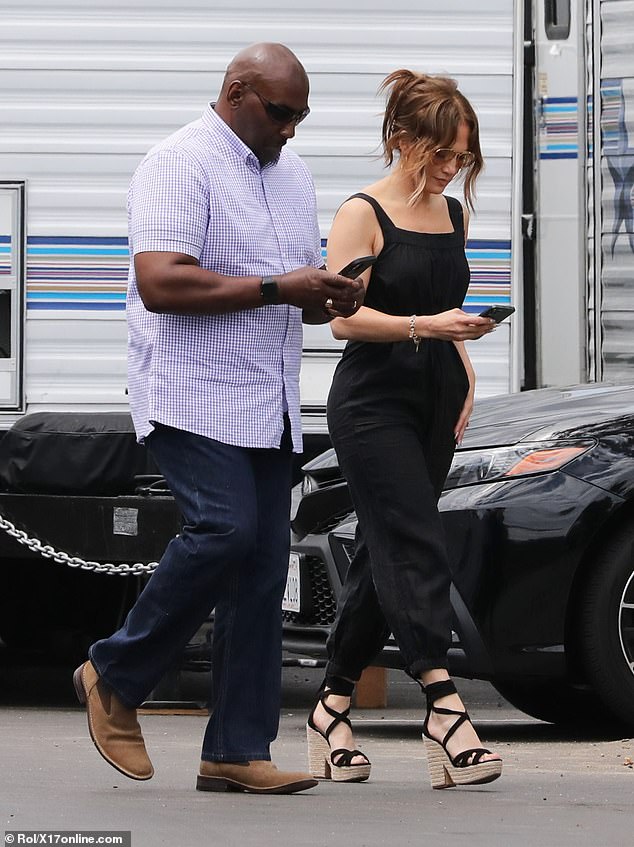 Set visit: Jennifer has lately been making regular visits to the set around lunch time, where Ben is working closely with his friend Matt Damon

The renewed collaboration was apparently so pleasant that they two jumped into another project.

They’re again co-writing the screenplay for their newest film — this time with Alex Covenry — and Ben is directing the film about Nike’s attempts to court Michael Jordan.

The Argo star will be appearing in the film as Nike co-founder and former CEO Phil Knight, while Matt will star as Sonny Vaccaro, the Nike executive who managed to sign Jordan’s first deal with the iconic shoe company, despite competing offers from more-established companies.

Matt was previously seen in costume in recent days, while Ben was dressed casually, suggesting he’s focusing on directing scenes that he doesn’t appear in.

Neither Ben nor Jennifer’s families appear to have ventures to the set with them. He shares Violet, 16; Seraphina, 13; and Samuel, 10, with his ex-wife Jennifer Garner, while she has twins Emme and Max, 14.

During a performance last week at Dodgers Stadium in Los Angeles, the Hustler’s star brought her child Emme out for a duet performance and referred to them publicly by gender-neutral pronouns. 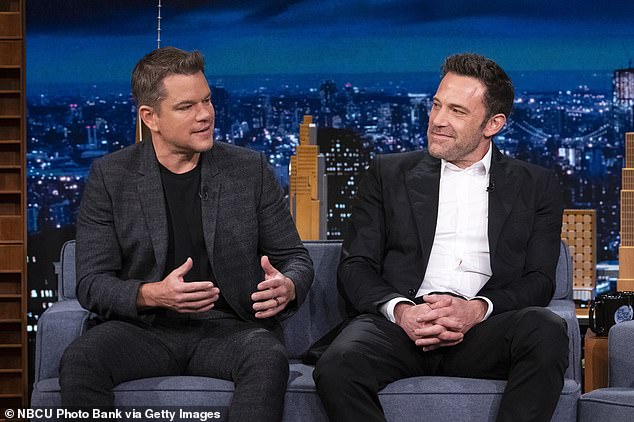 Collaborating! Ben and Matt are starring, writing, and producing the new film about how Nike managed to secure a partnership with Michael Jordan in the Eighties; pictured October 2021