Jennifer Lopez took a breather from filming Shotgun Wedding in the Dominican Republic to unwind by her ‘favorite lagoon.’

Despite looking serene in a stylishly tattered wedding dress, there has been some trouble in paradise lately, both personally and with regards to the film.

Between a casting shakeup on account of alleged cannibalism and abuse by Armie Hammer, and reports of a split between herself and Alex Rodriguez, the superstar, 51, has had a busy few months. 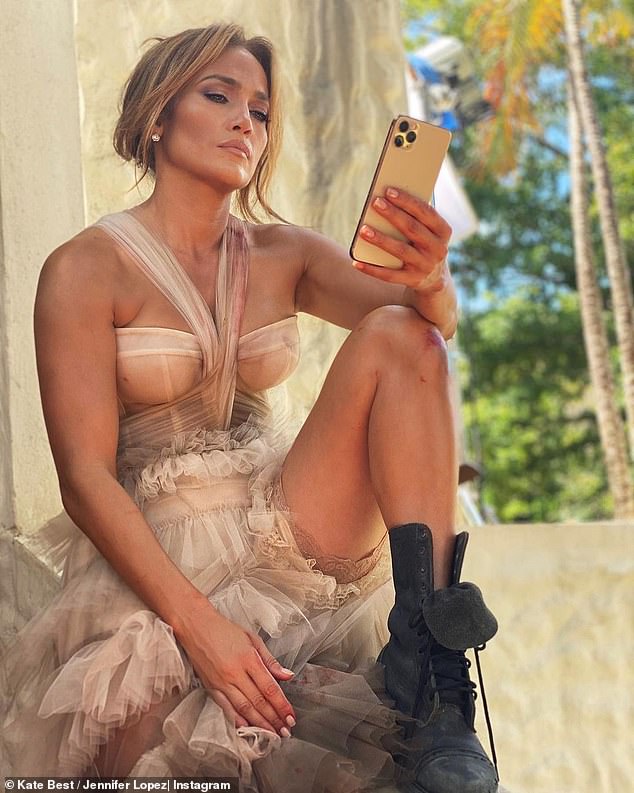 Breather: Jennifer Lopez, 51, takes a break from filming Shotgun Wedding as she unwinds by her ‘favorite lagoon’ in the Dominican Republic

The Bronx born beauty took a break from filming to check her phone and unwind by a very picturesque lagoon in full costume.

She looked every bit the stunner despite her tattered, blood covered gown, and distressed combat boots.

Her hair was whimsically swept back in an updo and she flashed a banged up knee, though the intensity of the stunts on set is currently unknown.

In another shot she was seen kicking her feet back in a chair and softly closing her eyes, with one of her many sparkling cups beside her. 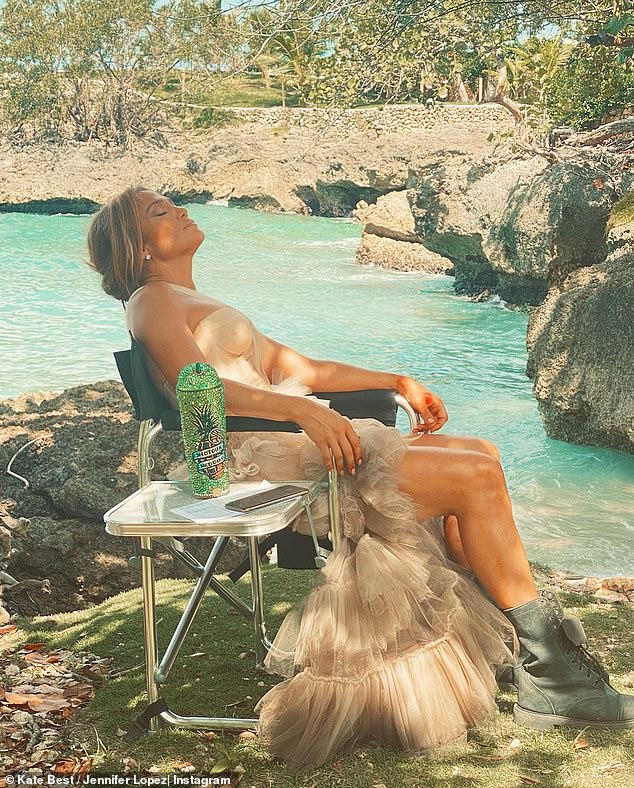 Set life: In another shot she was seen kicking her feet back in a chair and softly closing her eyes, with one of her many sparkling cups beside her 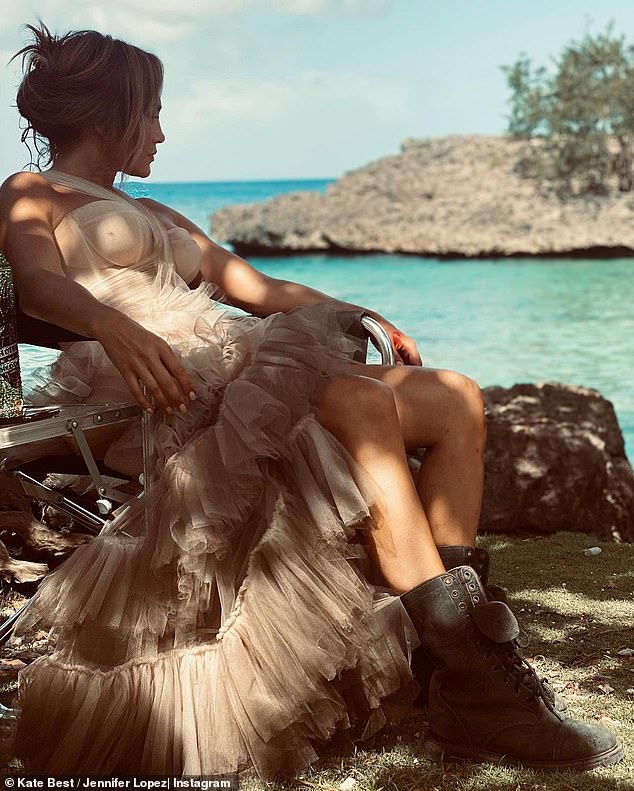 Busy lady: She looked every bit the stunner despite her tattered, blood covered gown, and distressed combat boots

And in another she longingly gazed at her surroundings under the shade of low hanging trees.

Amid one of many long days on set, she looked at ease for a little break as she captioned the trio of photos ‘Sitting by my favorite lagoon…’ with the hashtags ‘working in paradise,’ ‘set life,’ and ‘producer life.’

She has been hard at work on set since late February, but the production got off to a rocky start when Hammer — who was set to star opposite her — had to be replaced following allegations of BDSM-style abuse and even cannibalism. The actor has vehemently denied the claims.

After he was dropped by both the production and his talent agency WME, Josh Duhamel was tapped to replace him as Lopez’s spouse; the film follows a couple whose destination wedding gets taken hostage. 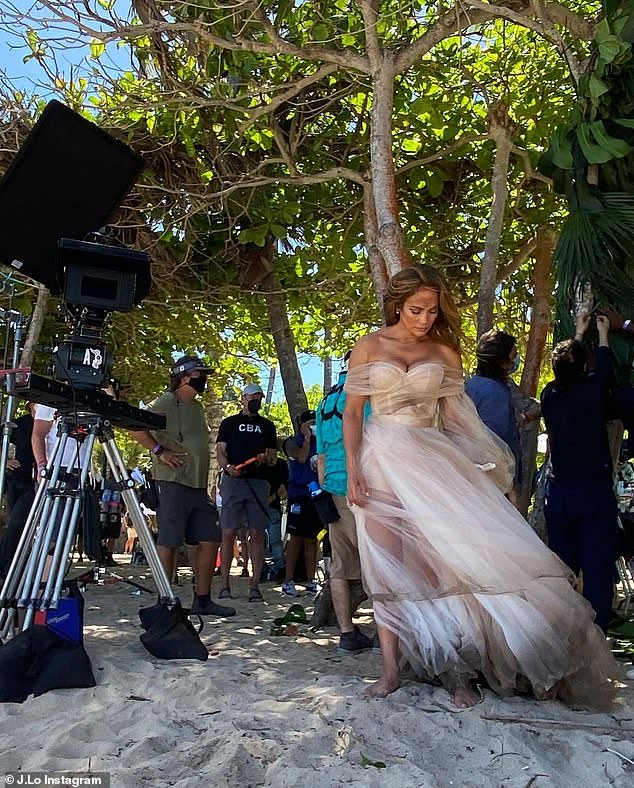 Though nowhere near as dramatic as the Call Me By Your Name actor’s fall from grace, Lopez has had some troubles in her relationship.

She and fiance of two years A-Rod hit a rough patch in recent months and a split was reported, before they released a joint statement saying they were ‘working through some things.’

Perhaps third party intervention causing some fractures in their seemingly perfect partnership, the former MLB player had found himself fending off cheating allegations.

Southern Charm star Madison LeCroy caused a stir when she confessed she and Rodriguez had DM’d and FaceTimed, after previously insinuating an affair with a married baseball player. 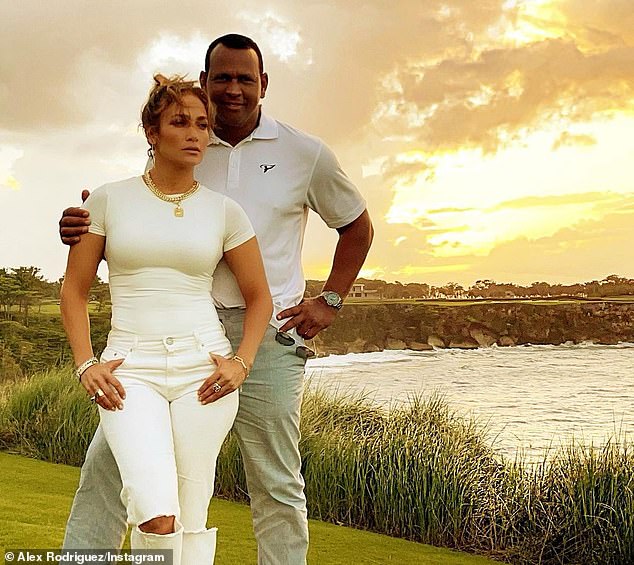 Trouble in paradise: It was reported that the engaged couple had split, before they released a joint statement saying they were ‘working through some things’; pictured February 28

Though Rodriguez denied knowing who she was, both LeCroy and her Bravo castmates confessed that they had indeed talked, though Madison clarified that they were merely acquaintances and nothing physical had transpired at any point.

Hoping to rebuild their relationship amid any drama, it has been said that Rodriguez is going above and beyond to prove his loyalty and love for JLo, which includes making quite a few trips to the Dominican Republic while she films.

It has been said that both are ‘prioritizing their relationship,’ and Lopez had confessed prior to any split rumors that they had embarked on couples therapy in conversation with Allure saying ‘it was really helpful for us in our relationship.’

Last week he was seen posting from the pool at the Villa Tres Ammaras where JLo has been staying, but on Tuesday she posted a photo from the pool with just her two kids Emme and Maximilian, 13 — A-Rod missing in action. 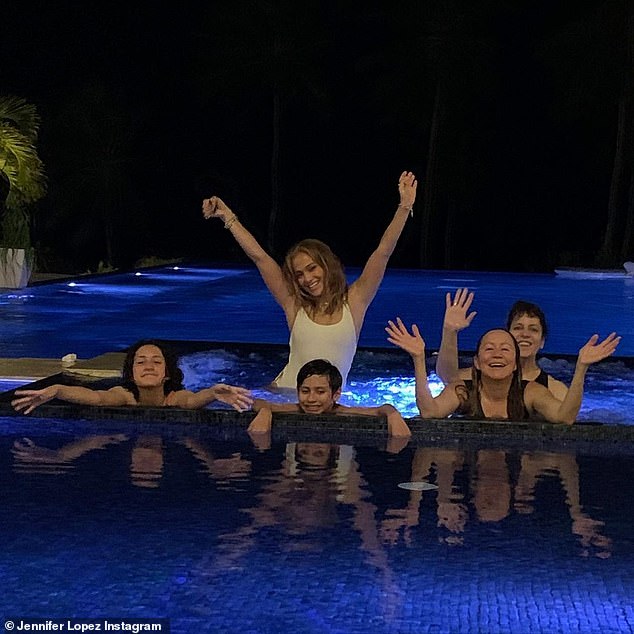 Where’s A-Rod? On Wednesday she posted a photo from the pool at her DR residence with just her two kids Emme and Maximilian, 13 — A-Rod missing in action; pictured March 30