She regularly shares an insight into her home life on Instagram.

So it’s no surprise that Jessica Simpson updated her fans with a series of festive family snaps on Christmas Day, as they enjoyed a low-key day together.

The singer and actress, 40, appeared every inch the doting mom as she donned matching Christmas pyjamas with her eldest daughter Maxwell, eight. 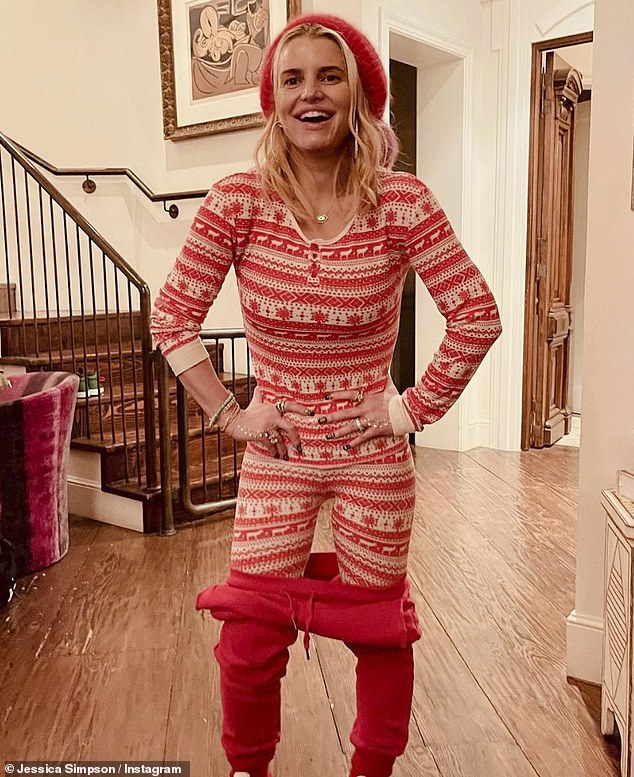 Family day: Jessica Simpson updated her fans with a series of festive family snaps on Christmas Day, as they enjoyed a low-key day together

Jessica showcased her incredible physique in a form-fitting red and white reindeer print two-piece, styled with a red beanie hat.

The mother of three opted for a fresh-faced make-up free look, while styling her blonde locks in loose waves.

In one funny snap, Jessica wore a pair of sweat pants pulled down to her knees, as she joked she thought her husband Eric Johnson, 41, was taking the shot from the waist up. 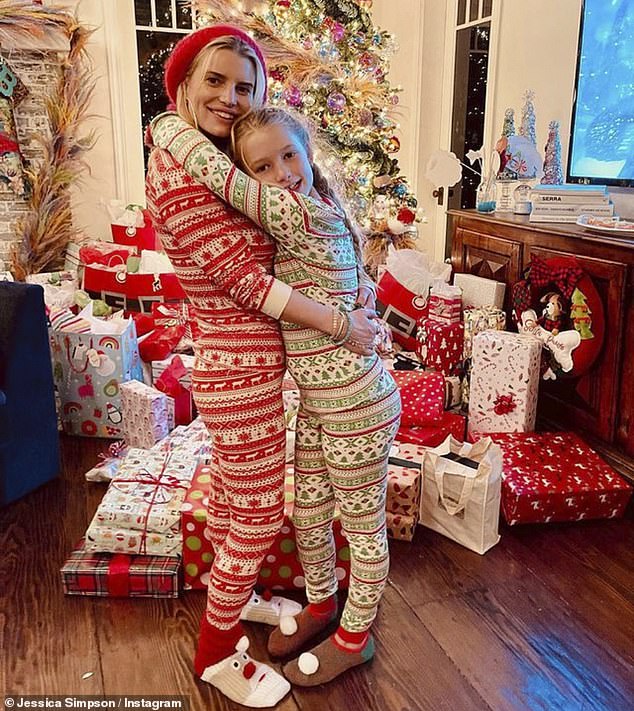 Aw! The singer and actress, 40, appeared every inch the doting mom as she donned matching Christmas pyjamas with her eldest daughter Maxwell, eight

While Jessica wore a red version of the sleepwear, Maxwell matched her mom in a green version, as they embraced for a photo in front of a mound of presents.

The media personality also posted an adorable picture of their youngest, Birdie, 21 months, in an elf costume with her hair in pig tails. 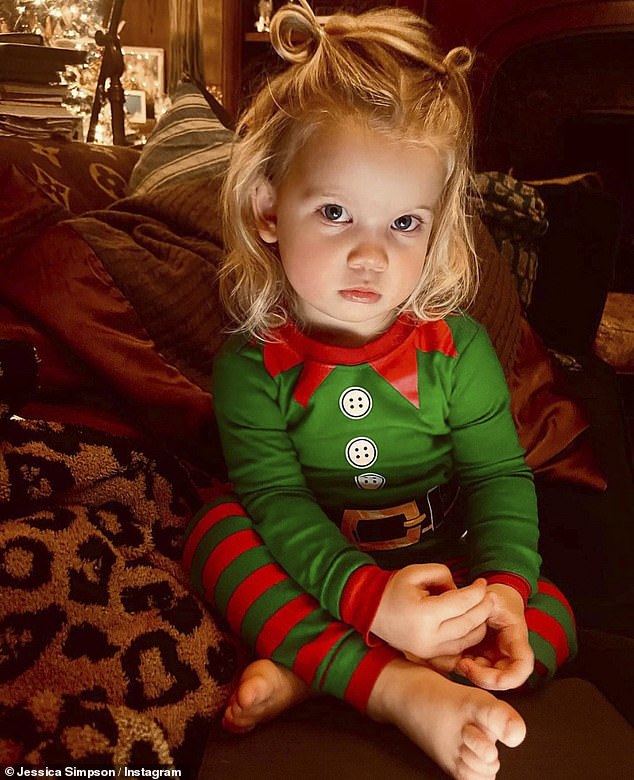 ‘Our little elf’ The media personality also posted an adorable picture of their youngest, Birdie, 21 months, in an elf costume with her hair in pig tails

As well as posting photos of her children on social media, Jessica also updates fans about her  Maltipoo pup, Dixie.

Earlier this month she shared a makeup free picture to her account showing her hanging out with her fluffy friend.

The caption read: ‘Two blondes waiting for the sun to rise.’ 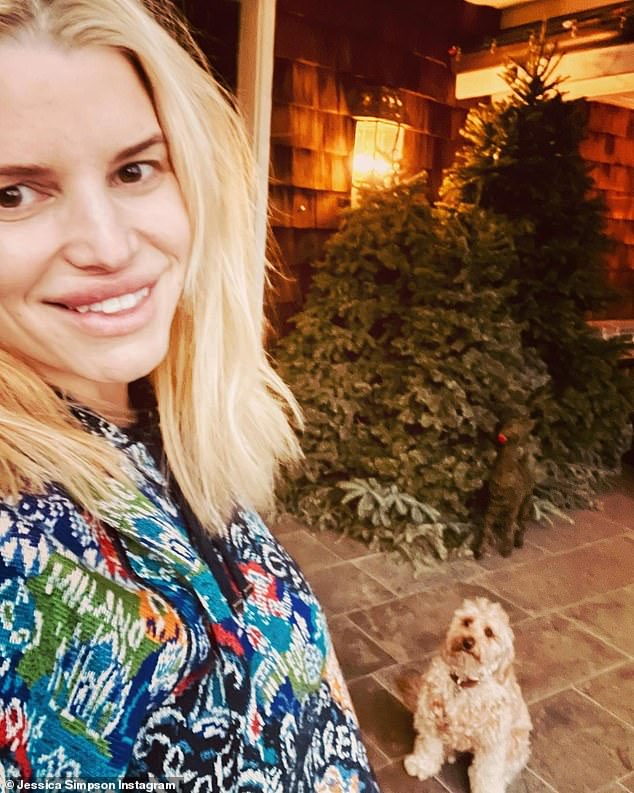 Puppy love: Jessica shared a photo depicting her hanging out with her Maltipoo pup Dixie

In the picture, the I Wanna Love You Forever singer could be seen standing in front of a number of Christmas trees that had not been decorated yet

Dixie, evidently not a camera-shy type of dog, was also spotted sitting obediently in the foreground.

Jessica wore a festive multicolored sweater to keep warm in the winter weather. 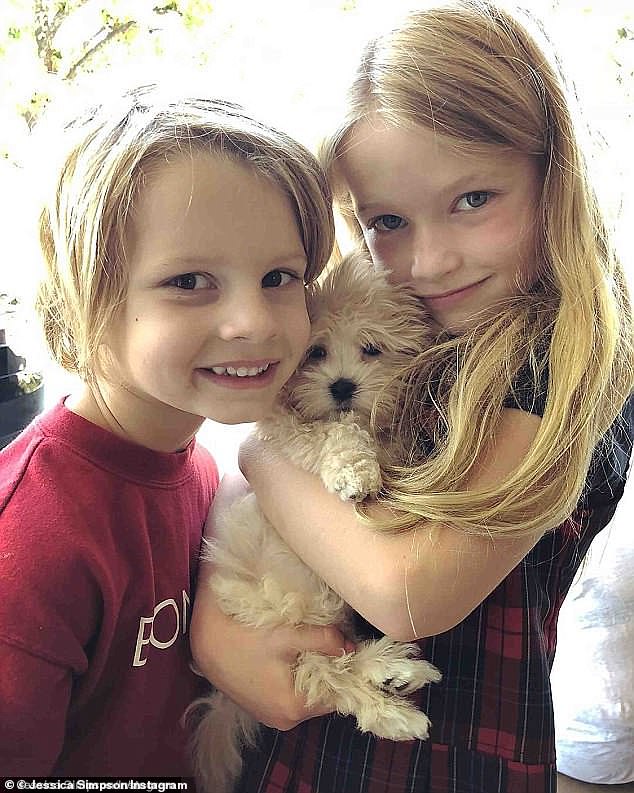 Family time: Dixie was adopted by Simpson and her husband Nick Johnson in 2018; the pooch is seen with two of the couple’s children, Ace and Maxwell

The singer had previously owned another Maltipoo named Daisy, who was often seen with her owner during her various trips and tours.

Sadly, Daisy was stolen away by a coyote in 2009, right in front of Simpson’s eyes, and was not found after a lengthy search.

Dixie first entered the Simpson family when she was adopted in 2018 by the singer and her second husband Eric Johnson.

The With You singer marked the occasion with a photo featuring her two children, Maxwell Drew, aged eight, and Ace Knute, aged seven. 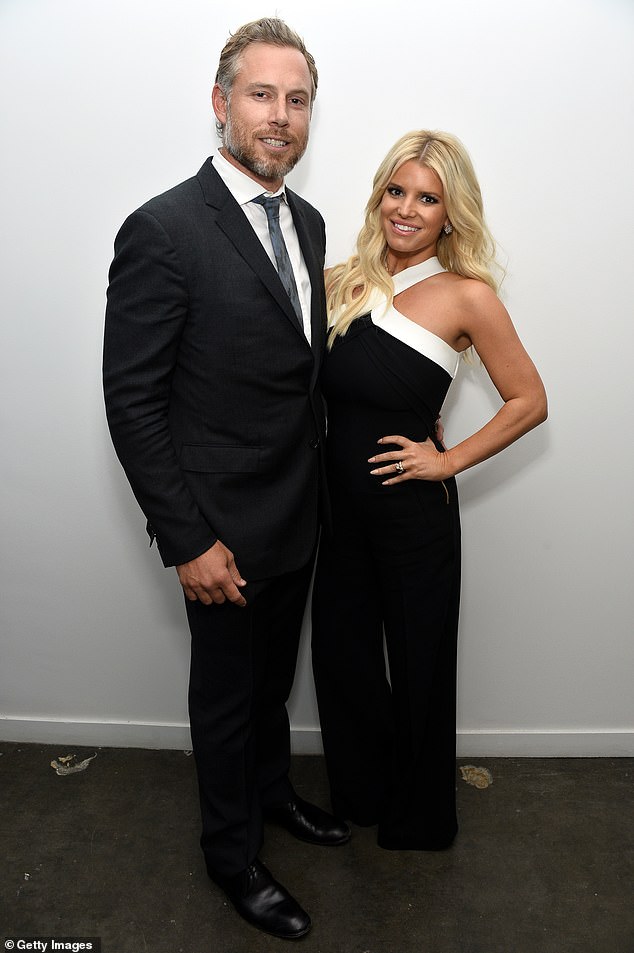 Going strong: Simpson and Johnson met in 2010 and tied the knot four years later; the two are seen in 2015

The singer-songwriter announced that she was pregnant for a third time in 2018, and welcomed a daughter named Birdie Mae the following year.

Simpson and her 41-year-old now-husband met in 2010, not long after the end of the former NFL player’s professional career, and were engaged that same year.

The two tied the knot four years later after welcoming the first two of their three children.

She was previously married to 98 Degrees band member Nick Lachey from 2002 until 2006. 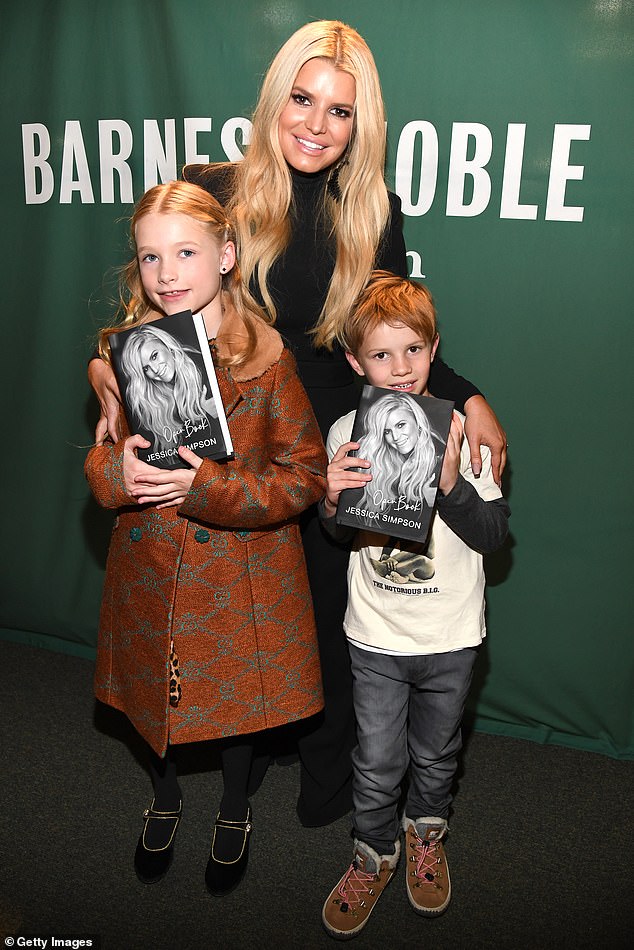 Mom time: The Dukes Of Hazzard actress is seen with the elder two of her three children in February