Jonathan Ross’ daughter Honey, 23, poses in a blue bikini after revealing she ‘hated herself’ before accepting she is ‘really attractive’ at size 18

She’s been in the centre of headlines ever since she revealed her famous parents Jonathan Ross and Jane Goldman presented her with ‘absolutely toxic’ diets when she was a teen.

And Honey Ross was the picture of confidence as she shared a radiant snap to her Instagram Stories on Wednesday after revealing she once hated herself before accepting she is ‘really attractive’ at size 18.

The writer, 23, looked stunning as she posed in a blue two-piece, complete with a sweetheart neckline-style bralet and matching briefs. 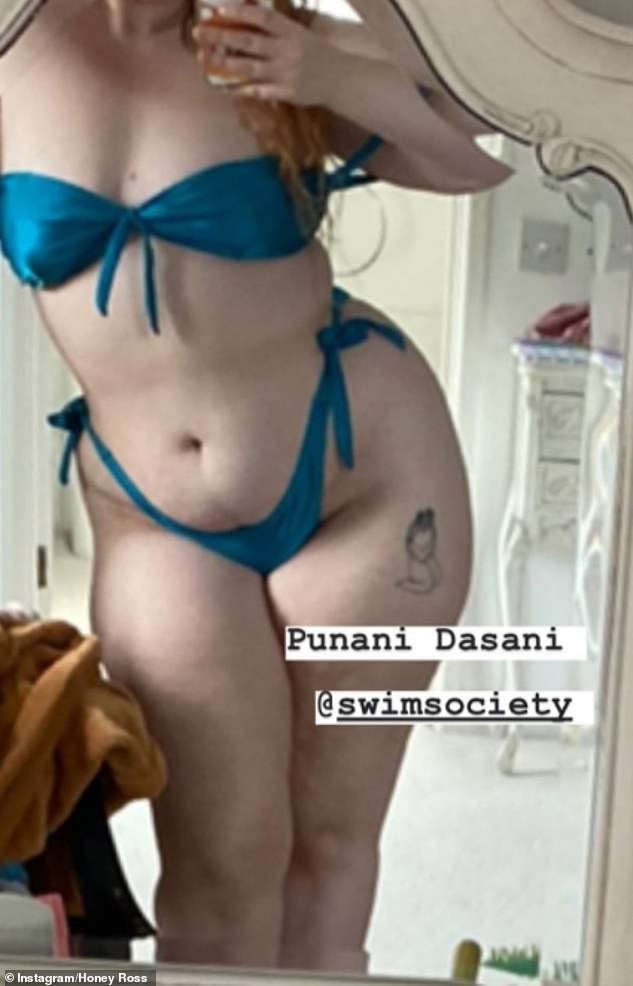 Working it: Honey Ross was the picture of confidence as she shared a radiant bikini snap to her Instagram Stories on Wednesday

Ensuring focus remained on her figure, the Pink Protest co-founder cropped her face out of the artistic photo, taken from her bedroom.

The online personality quoted lyrics from Cardi B and Megan Thee Stallion’s hit single WAP as she captioned the image: ‘P***** Dasani’.

Despite previously admitting famous parents would encourage her to lose weight in the past, the model dismissed the notion that they did anything wrong in a new interview. 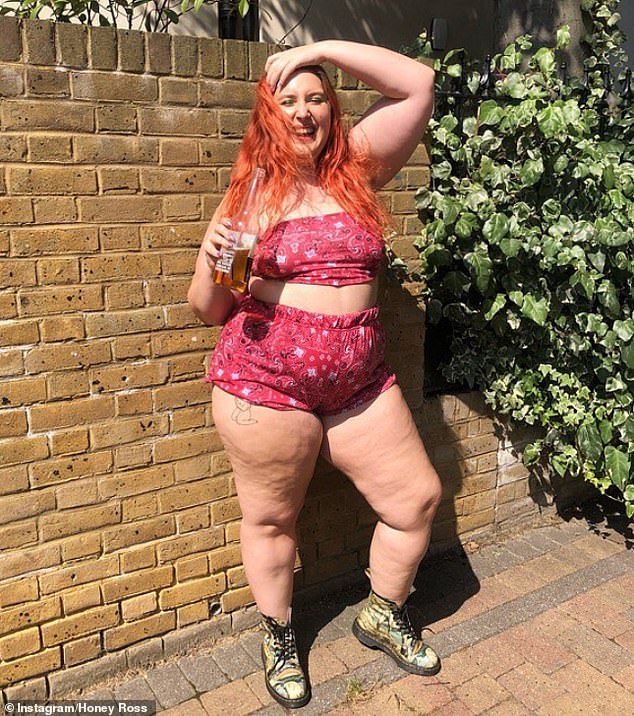 Past battles: The writer, 23, recently revealed she once hated herself before accepting she is ‘really attractive’ at size 18 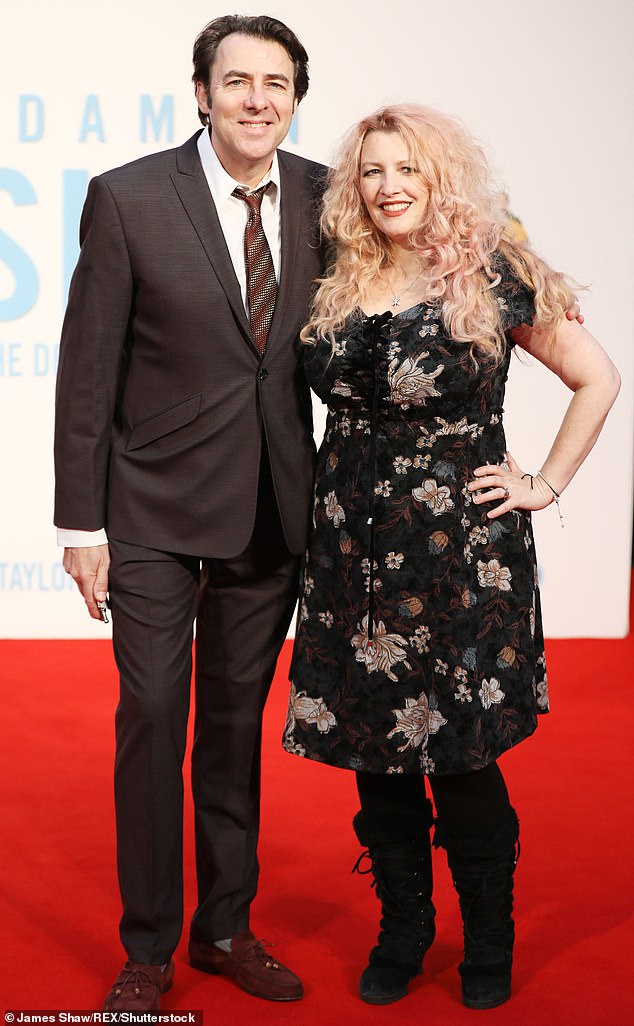 Controversy: The blogger has been in the centre of headlines ever since she said her parents Jonathan Ross and Jane Goldman presented her with diets as a teen (pictured in 2017)

‘I think people would very much like to spin it that my parents were forcing me to do a diet. Of course they weren’t. I hated myself. I hated my body,’ she told The Sun. ‘I could see that it broke their hearts to see their daughter so full of self-loathing.’

The activist confessed being targeted by trolls online was what spurred her obsession with her weight at the tender age of 12.

Being featured alongside her family online allowed such comments to be posted – with Honey opting into Weight Watchers and requesting a personal trainer by age 14. 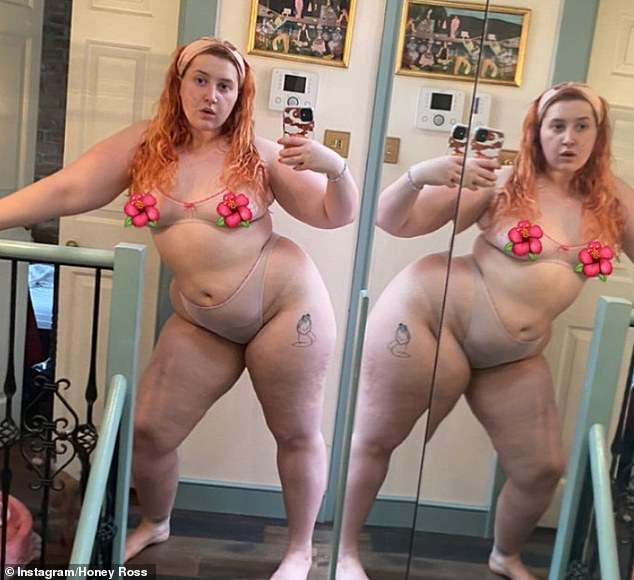 ‘It made me see everything really clearly’: The Pink Protest co-founder confessed she was ‘furious’ when people started being nicer to her when she lost weight

The celebrity offspring shed weight but felt ‘more miserable’ and irritated that people who had ignored her previously were suddenly being friendly.

She recalled: ‘I was thin and very intimidating. People who had never given me a second glance were being so nice to me and flirting with me. And I was f**king furious. It made me see everything really clearly. When you are a fat woman, sometimes you’re not even treated like a person.

‘Because I’ve got a gut, apparently that’s a big deal. I am really attractive,’ Honey said. ‘I’m an attractive young woman who wants to enjoy my life and my body in the same way that my thin friends have always been allowed to.’

The Body Protest co-host was recently forced to hit back at ‘fatphobic’ people sliding into her DMs on social media to send her abusive DMs.

She wrote on Instagram:’I’m not even joking, someone in my comments saying I’m going to die of heart disease is in my DMs asking me out. You couldn’t write it.

‘For the overwhelmingly lovely DMs I’ve received – thank you so much and I wish you all the most beautiful journey of self love and self acceptance. Let today be the day you start being kind to yourself and your body.

‘Truly there’s only a handful of people being outwardly fatphobic. And it really does not affect me in any meaningful or long lasting way – more like a momentary annoyance and an anger that what they’ve said would really hurt someone with less of a hardened shell than I have.

‘Their choice to harass fat people says more about them than it does about me, a wholesome fat woman merely existing happily. Also TBH, I know it’s because they wanna f**k me and are angry that’s never gonna happen.’ 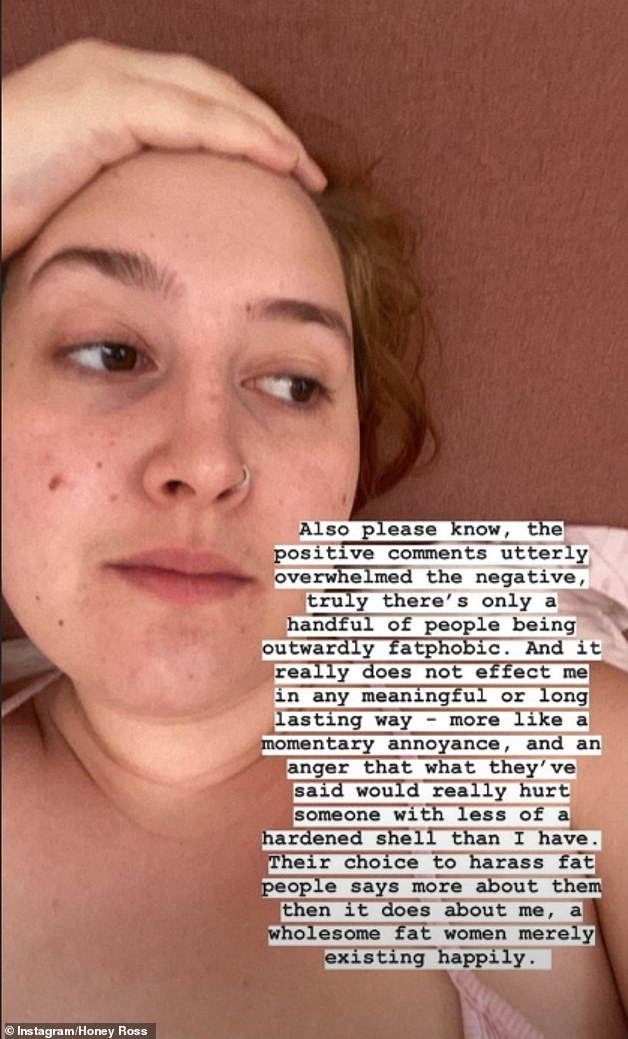 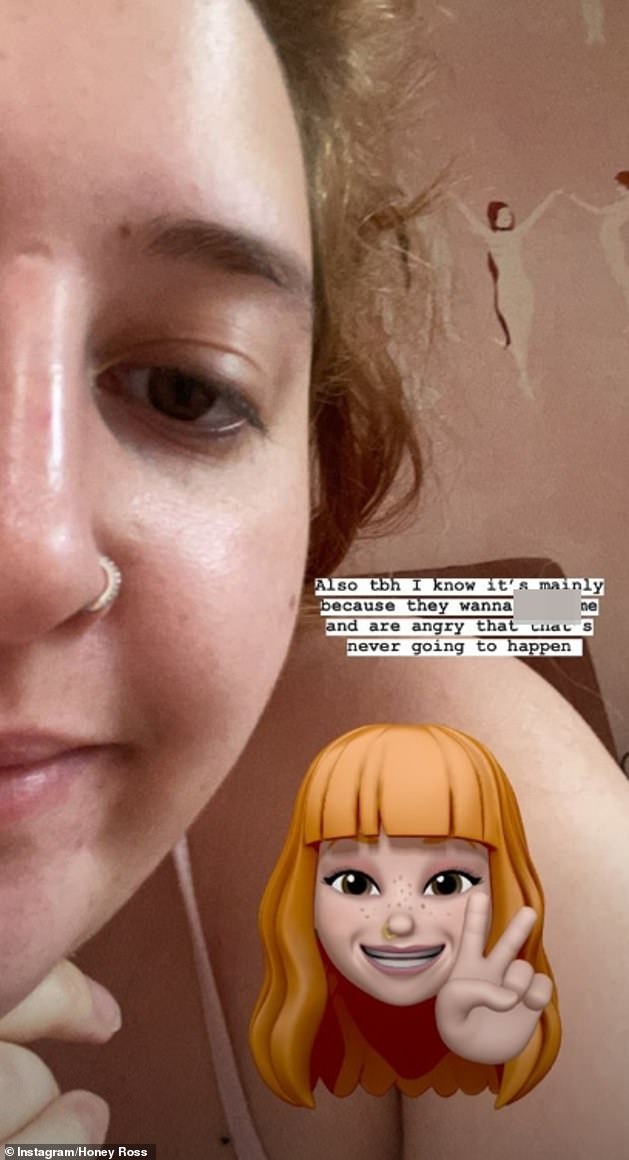 ‘It’s a momentary annoyance’: The Body Protest co-host was recently forced to hit back at ‘fatphobic’ people sliding into her DMs on social media to send her abusive DMs