Julia Fox left little to the imagination when she stepped out to The Cock nightclub in Downtown New York City.

The model and actress turned more than a few heads when she strutted her way to the two-level bar in a revealing black leather ensemble.

The Cock was only a quick pitstop before she headed to the west side to check out a surprise performance by Madonna at a Women Of Power WOW event at the Terminal 5 music venue in the Hell’s Kitchen neighborhood. 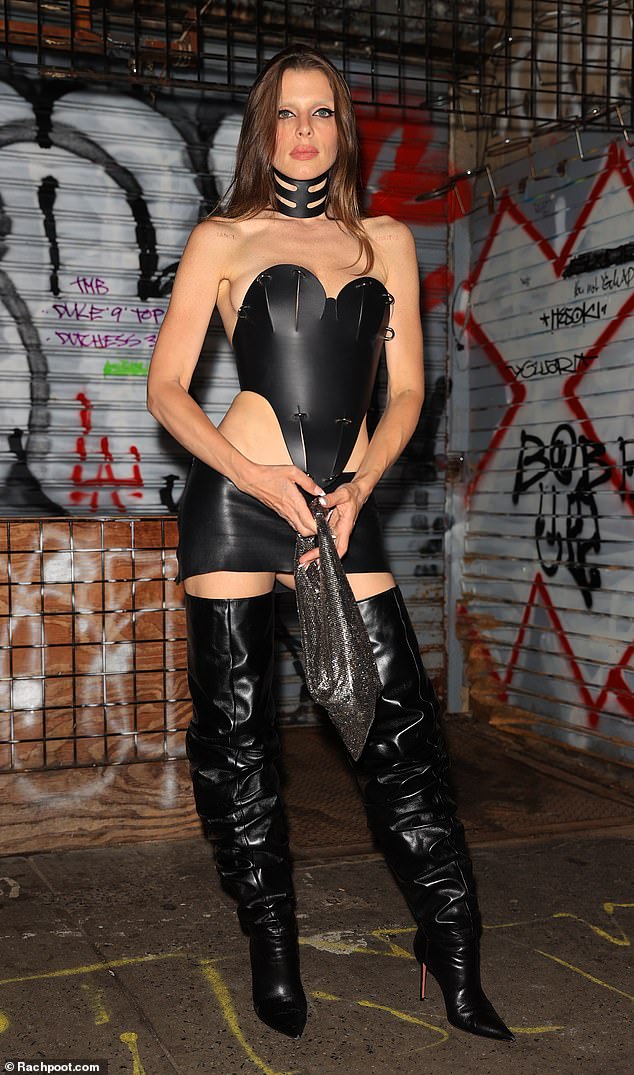 Revealing: Julia Fox, 32, showcased her fit figure in a racy black ensemble outside of The Cock bar in Downtown New York City on Thursday

Fox’s outfit consisted of a skimpy leather skirt and a top that showed off her bare hips and cleavage.

She added a pair of black stiletto boots that came all the way up to the middle of her thighs.

In an added touch of edgy style, she accessorized with a black ornament of sorts that went around her neck as she carried a small bag that held her s=essentials. 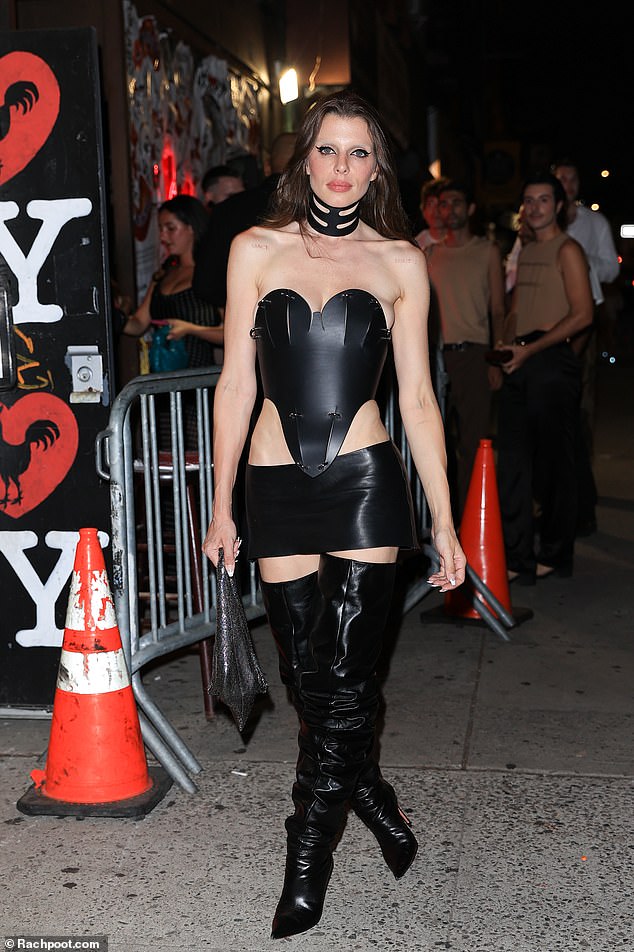 Eye-catcher: Her racy ensemble caught the attention of people waiting outside the nightclub 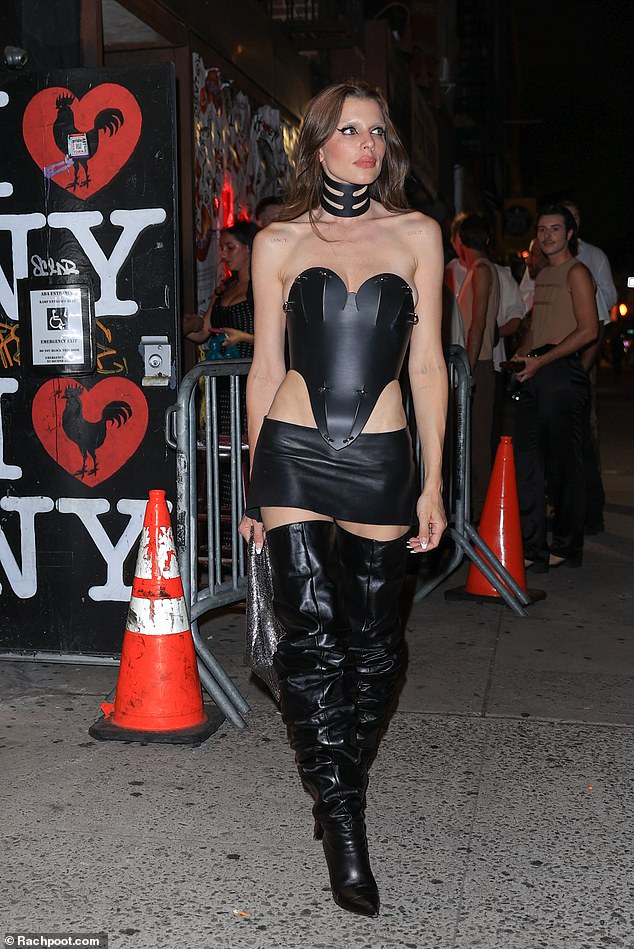 Quick pitstop: Her visit to the bar was only a pitstop before she headed t the west side to check out Madonna’s surprise performance at Terminal 5

On this night, the Italian-American had her dark brown tresses styled long, straight and flowing several inches past her shoulders with a part in the middle.

After making the rounds at the bar, which typically has theme nights featuring DJs and go-go boys, Fox made her way back out to the bustling streets to make her way to the Madonna show.

But before leaving she struck several more poses, including a few of her gracefully coming down a staircase.

Later in the evening, Fox took to her Instagram page and posted a video of Madonna performing alongside several drag queens as part of the kick off to Pride 2022 weekend in New York City. 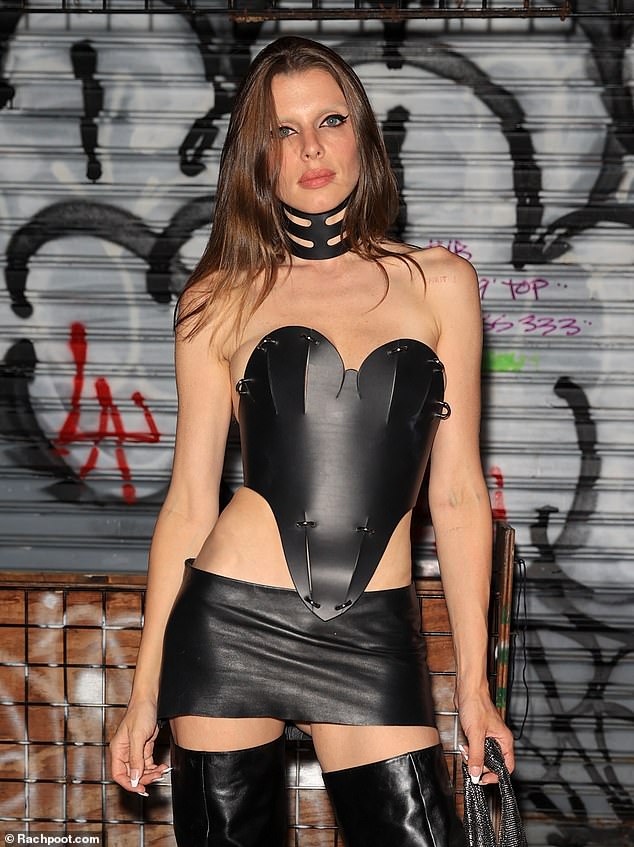 Edgy: The Uncut Gems star combined a short leather skirt with a top that looked like a shield 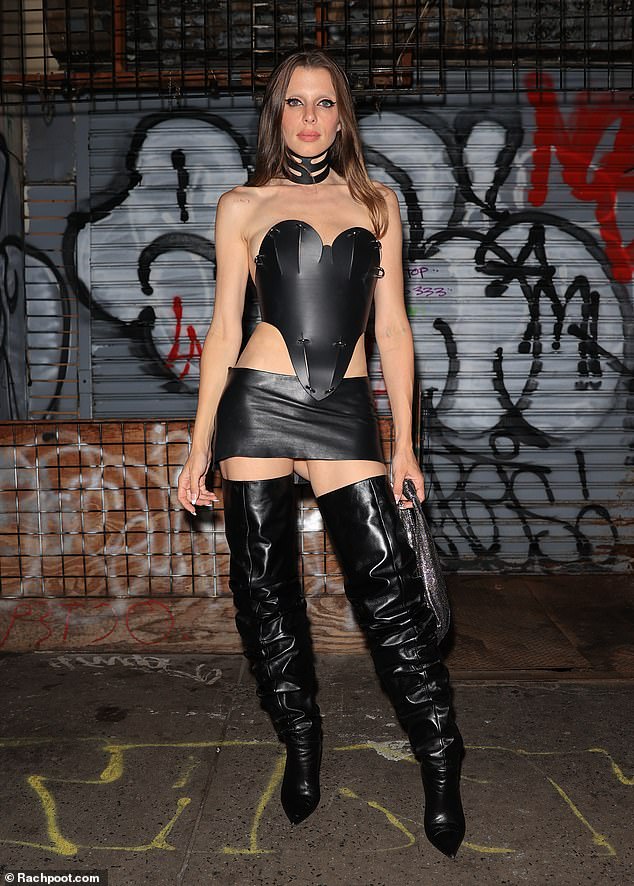 Hot: The Italian-American also donned a pair of stiletto boots that came up to her mid-thighs

As an actress, Fox is best known for her debut performance in the the film Uncut Gems (2019).

Before transitioning her focus to acting, Fox worked as a model and clothing designer, which included the launch of the women’s knitwear luxe line, Franziska Fox, with her friend Briana Andalore.

Fox also made headlines across the world when she had a whirlwind romance with hip hop superstar Kanye West soon after meeting at a New Year’s Eve party in Miami just over a year ago.

They reportedly enjoyed dates in New York City, Los Angeles and Paris before announcing they had split on Valentine’s Day 2021. 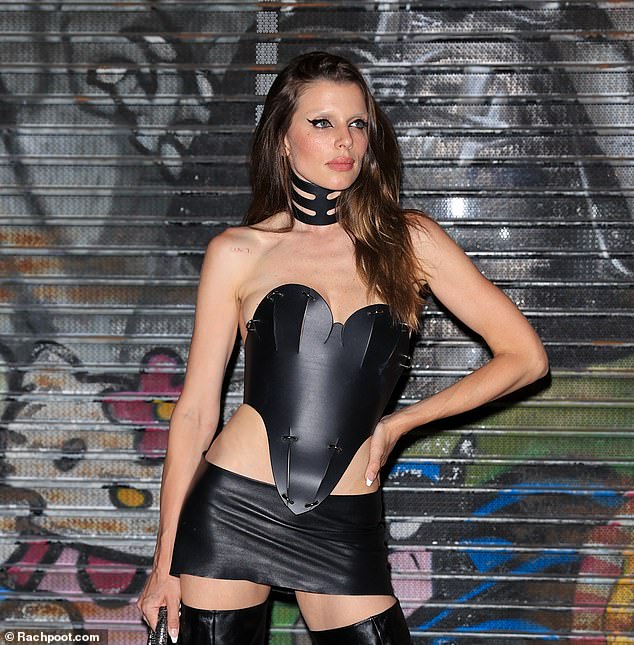 Working it: The Milan, Italy native struck a number of poses for the admiring photographers 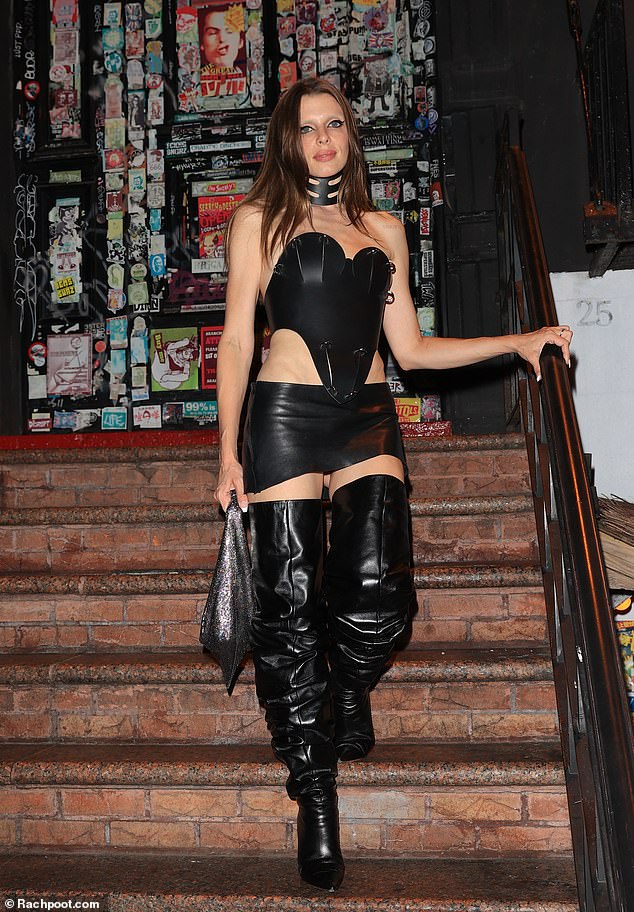 Night on the town: After making the rounds at The Cock bar Fox headed to the west side to check out Madonna’s surprise performance at Terminal 5 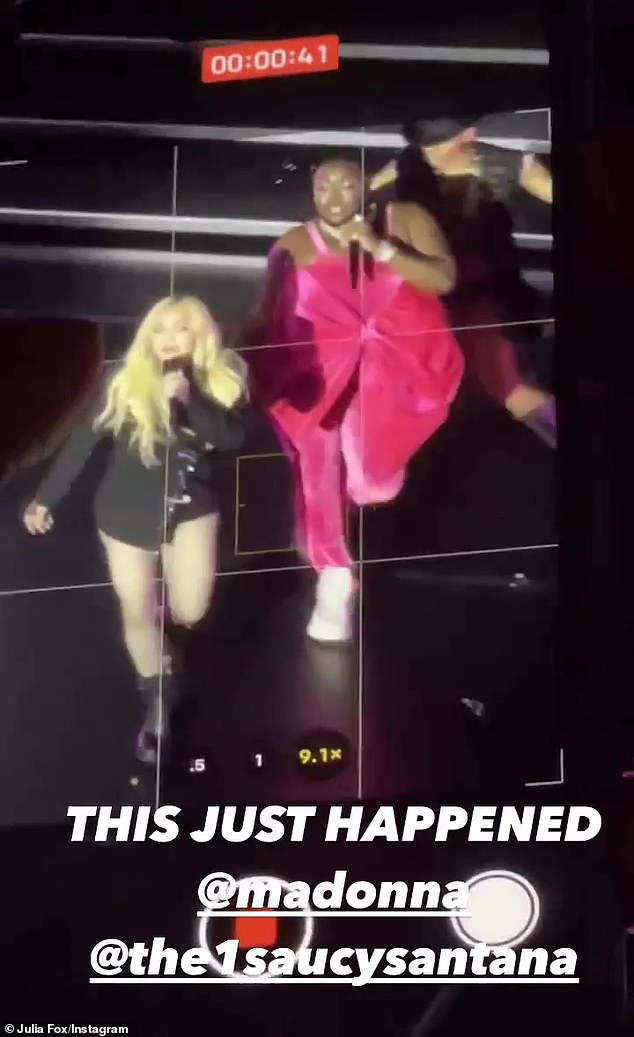 Later in the evening, Fox posted a video of Madonna performing as part of the kick off to Pride 2022 weekend in New York City 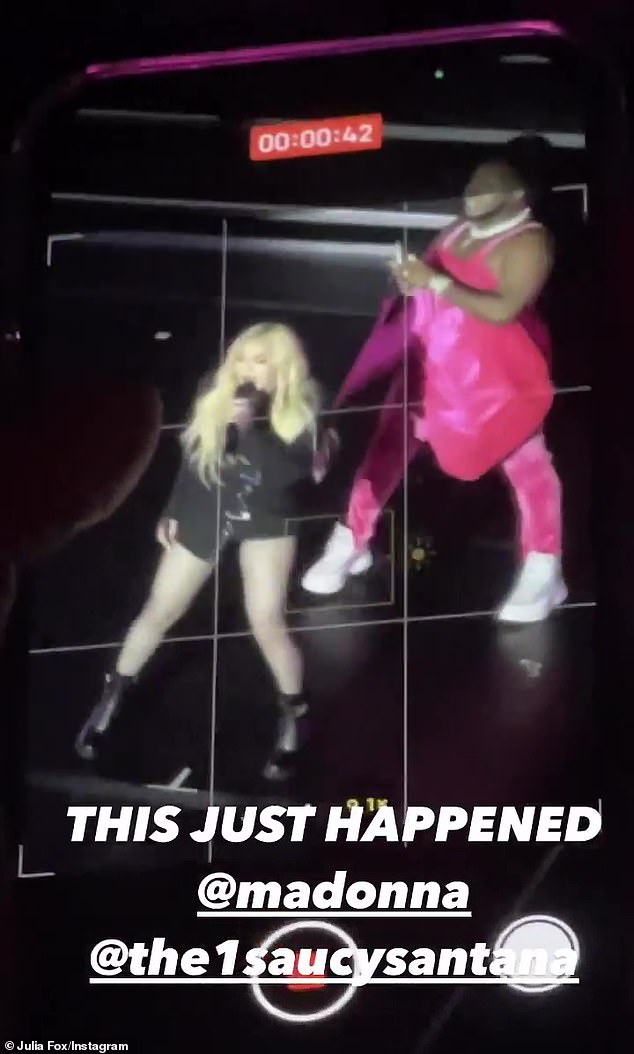 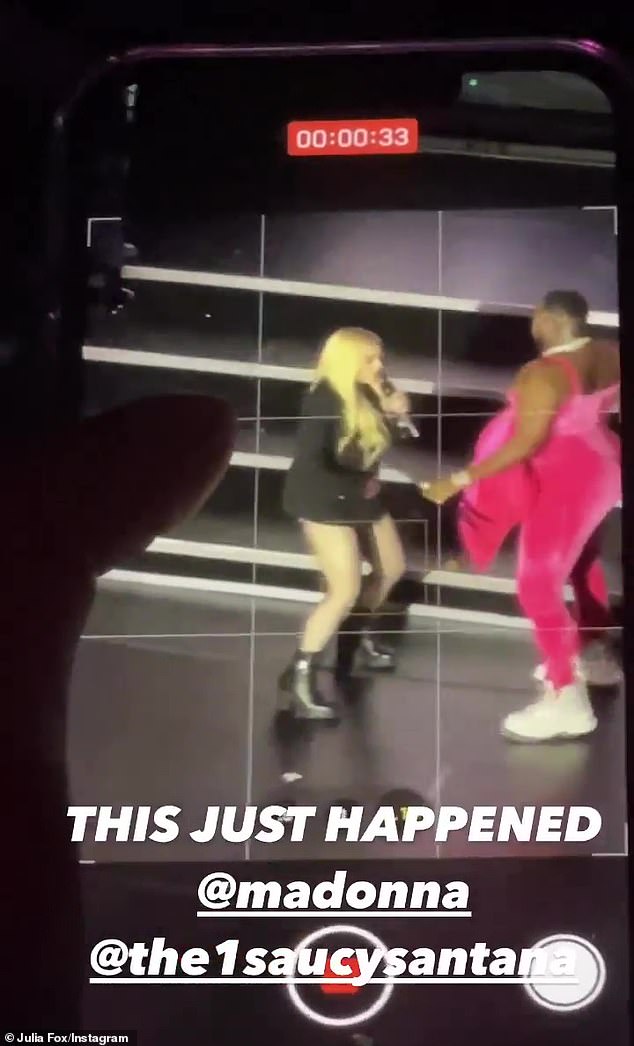 Pop superstar: ‘This just happened,’ the actress wrote across the short video clip 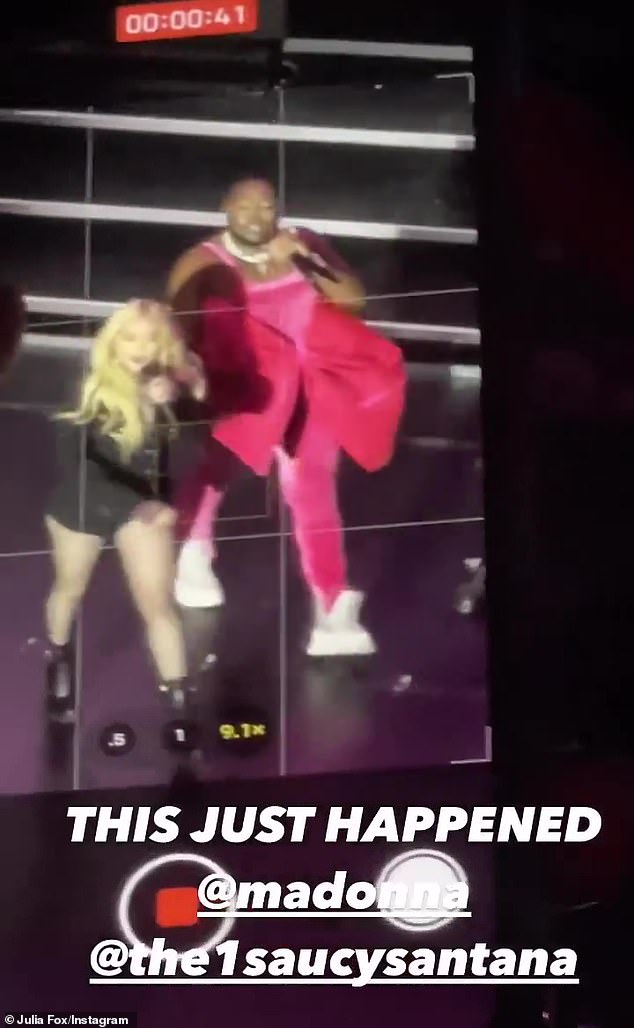 Fashionista: Madonna commanded the stage in a short black ensemble and matching boots