She has reportedly split up from her toyboy beau Pete Davidson.

And Kate Beckinsale indulged in a little retail therapy as she stepped out in Brentwood, Los Angeles on Saturday.

The actress, 45, covered up her gym-honed physique in a chic monochrome pyjama co-ord which was embossed with a stylish swirled print. 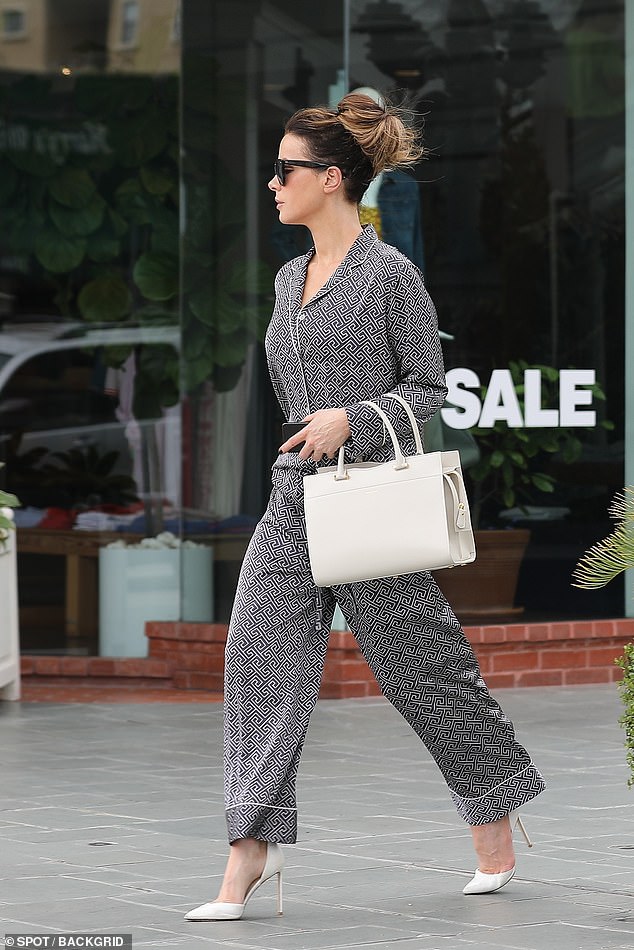 Glam: Kate Beckinsale indulged in a little retail therapy as she stepped out in a chic monochrome co-ord in Brentwood, Los Angeles on Saturday

Kate added a boost to her height with white stilettos, which complemented her white leather handbag.

Styling her brunette hair back in a high bun, the Widow star finished off her look with black cat-eye shades and a bronzed palette of make-up.

Kate showed no signs of heartbreak amid her reported recent split from Pete, flashing a smile as she tottered around the shops. 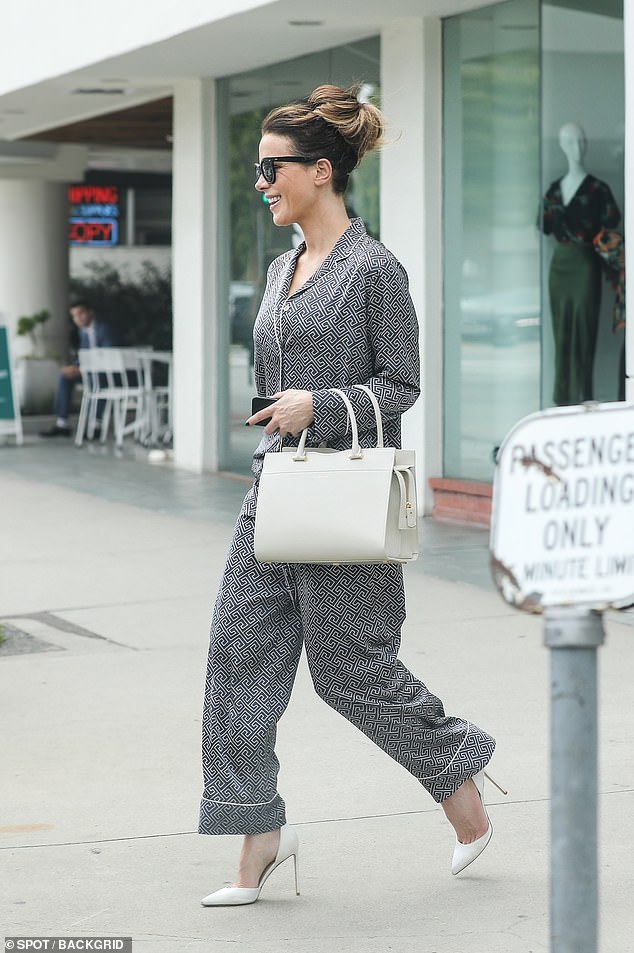 High spirits: The actress, 45, showed no signs of heartbreak amid her reported recent split from Pete, flashing a smile as she tottered around the shops

Copy Kate in a pajama style co-ord by Natori 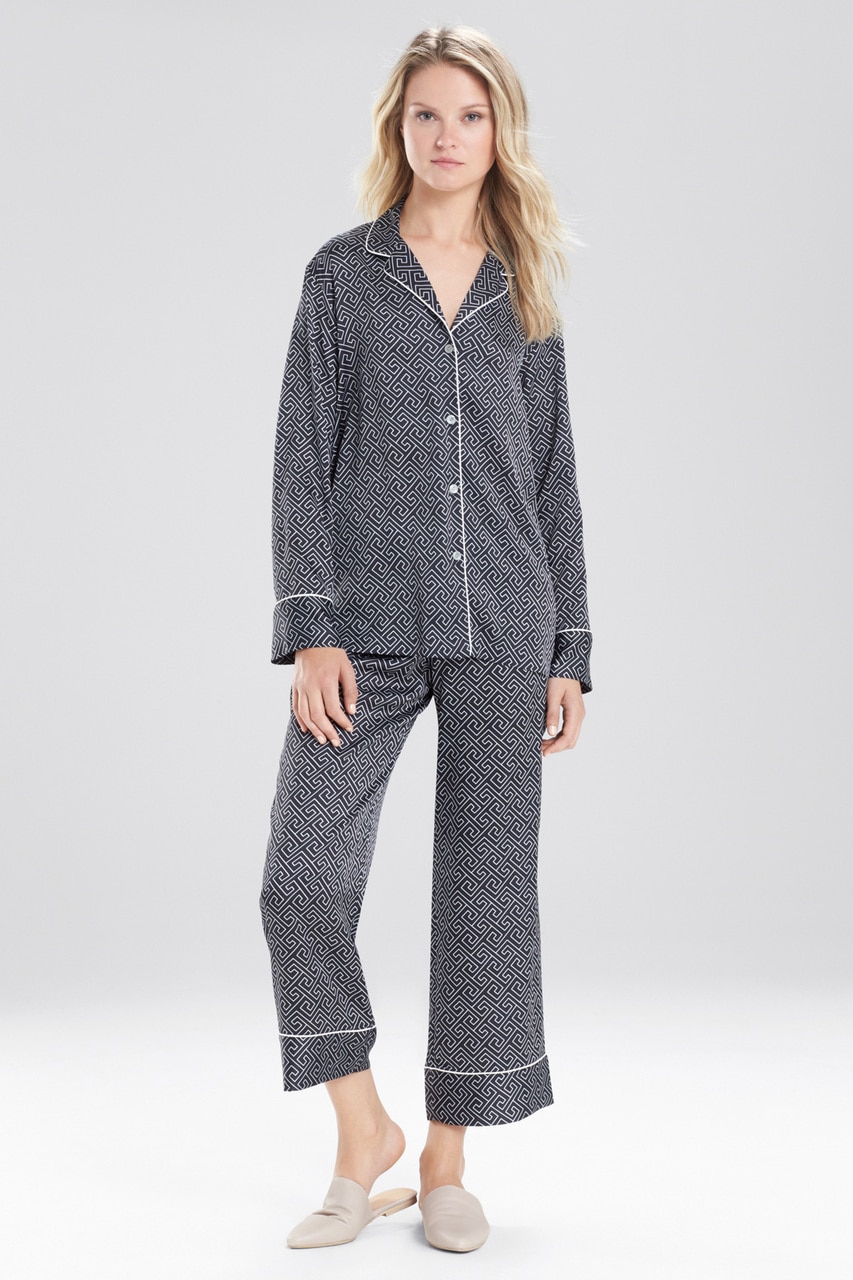 For a while now we've spotted celebs donning nightwear as daywear, and it seems wearing your silk pajamas is the way to tackle the trend.

Take styling notes from Kate Beckinsale, wearing the 'Labyrinth' pajama set from Natori. This geometric, monochrome pattern is super flattering and makes for a subtle design to wear from head to toe.

Dress the look up with sky high heels like Kate, or opt for a clean white trainer to add a laid back edge to this luxurious look.

To steal this exact style, click (right) and bag yourself a set today! Alternatively, check out the carousel below where we've rounded up our favorites. Splash the cash at Olivia Von Halle or bag yourself a bargain with PrettyLittleThing…

Kate’s outing comes after it was revealed she is yet to finalise her divorce from American director Len, 46, after they called time on their 11 year marriage in 2015.

According to The Blast, the court has now put the exes on notice that they must appear in court in July to finish the divorce proceedings.

Court documents obtained by the website reportedly state ‘IF YOU FAIL TO TAKE THE APPROPRIATE STEPS in your case the Court may dismiss your case for delay.’

The couple have reportedly taken no further steps in the case since Kate filed her response back in 2017 after Len initially filed for divorce in October 2016. 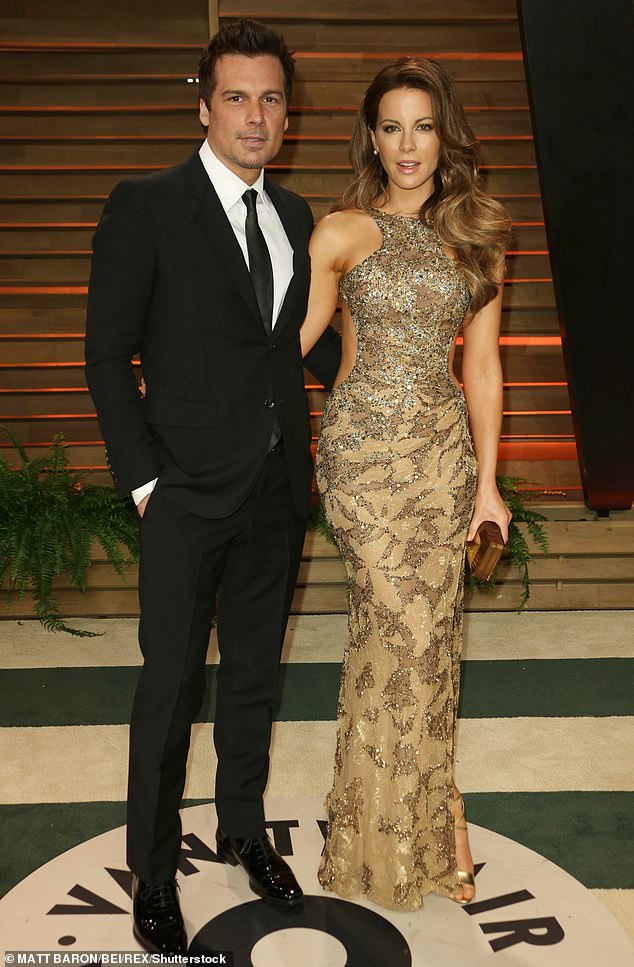 Exes: Meanwhile, Kate is still legally married to director Len Wiseman, despite splitting over three years ago, as it’s revealed the exes have yet to finalise their divorce (pictured in 2014)

The couple started dating in 2003 after meeting on the set of Underworld which Len directed and Kate starred in.

Kate was previously in a long-term romance with fellow actor Michael Sheen, who she began dating in 1995 before breaking up in 2003. They share a daughter Lily, 19.

More recently Kate’s romantic life has hit the headlines thanks to her romance with SNL star Pete Davidson, 25.

They began dating in January, but their casual romance was said to have ‘fizzled out’ late last month because Kate struggled with the ‘attention’ surrounding the union. 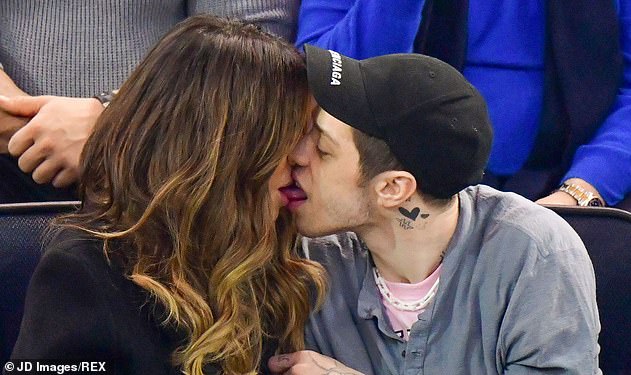 Cooling off: Kate, 45, and Pete, 25 have broken up after a brief PDA-filled romance