She’s travelling through beautiful Italy with her family.

And the fun continued on Monday for Kate Hudson, but this time at sea, as the actress enjoyed a day on board the luxurious mega yacht with her boyfriend Danny Fujikawa, her mother, Goldie Hawn, and Kurt Russell.

From exploring the Italian coastline by kayak to sharing a sweet smooch with her boyfriend, Kate, 40, was clearly having the time of her life exploring the seaside. 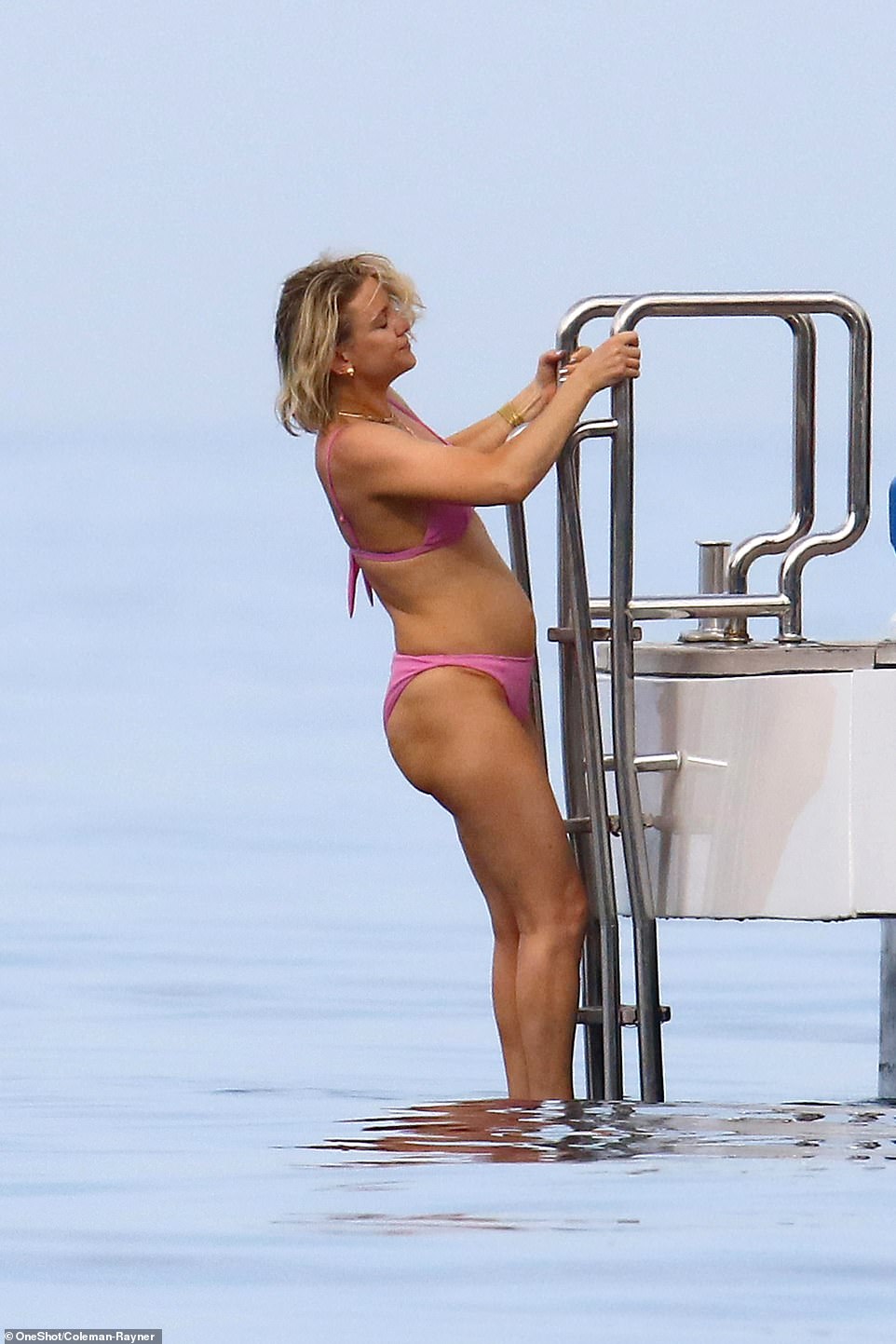 Boat loads of fun! The fun continued Monday for Kate Hudson, who enjoyed yet another amazing day alongside the Italian coastline in a yacht with her boyfriend Danny Fujikawa and her mother, Goldie Hawn 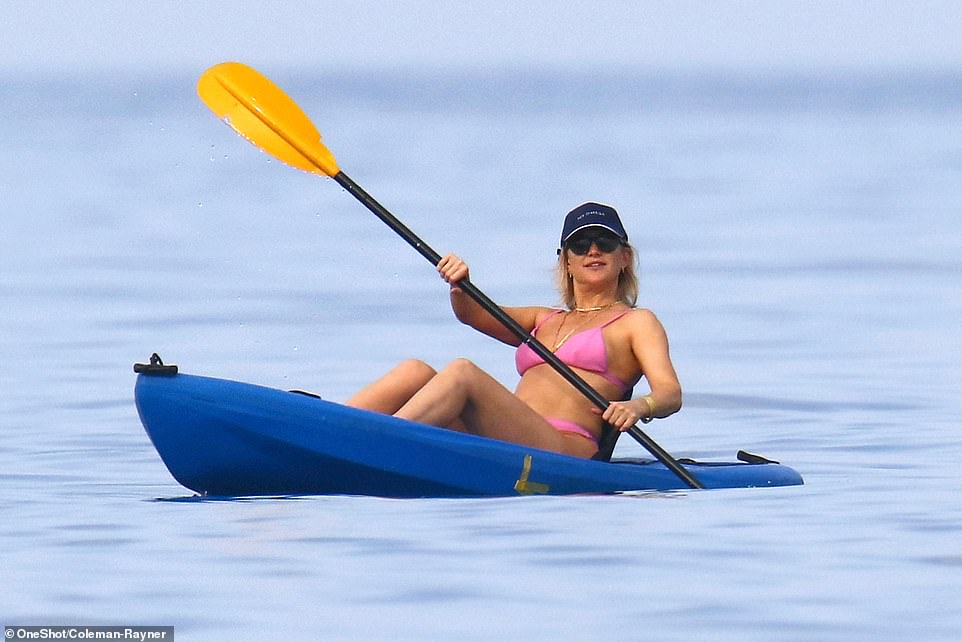 Making waves! Kate looked relaxed as she paddled her way through the sea

Even while surrounded by the crew, the couple appeared to be in their own world as they shared the kiss.

Aside from the kissing break, it was otherwise an adventurous day to be had by the actress.

The couple were seen exploring the stunning seaside off the yacht and on board a much smaller boat with their friends.

Relaxing under the shade of a colorful umbrella, Kate kicked back on the boat and scrolled through her phone as her family climbed on board. 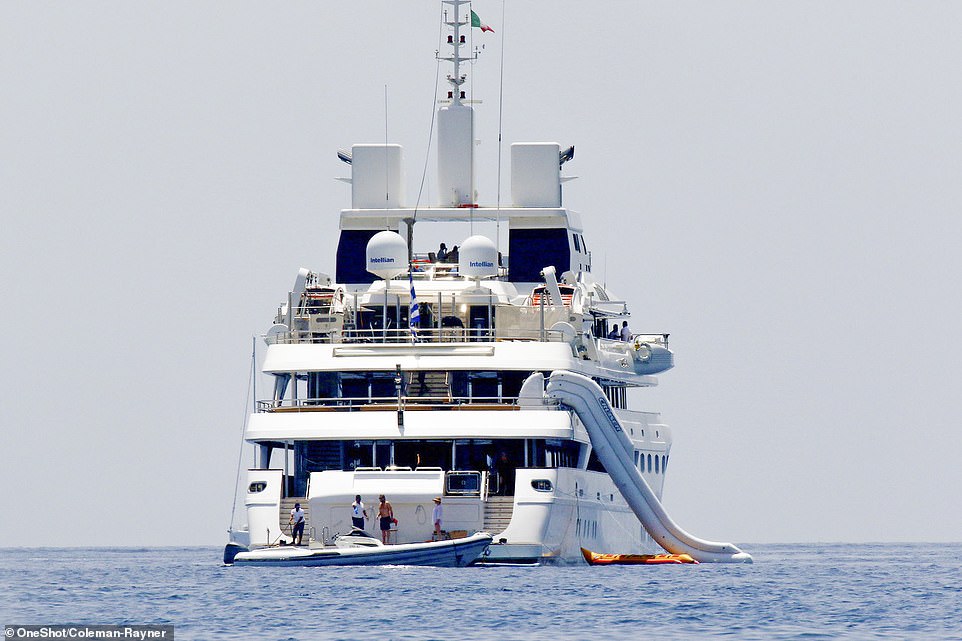 Anchors aweigh! The lavish O’Mega yacht Kate and her family set sail on 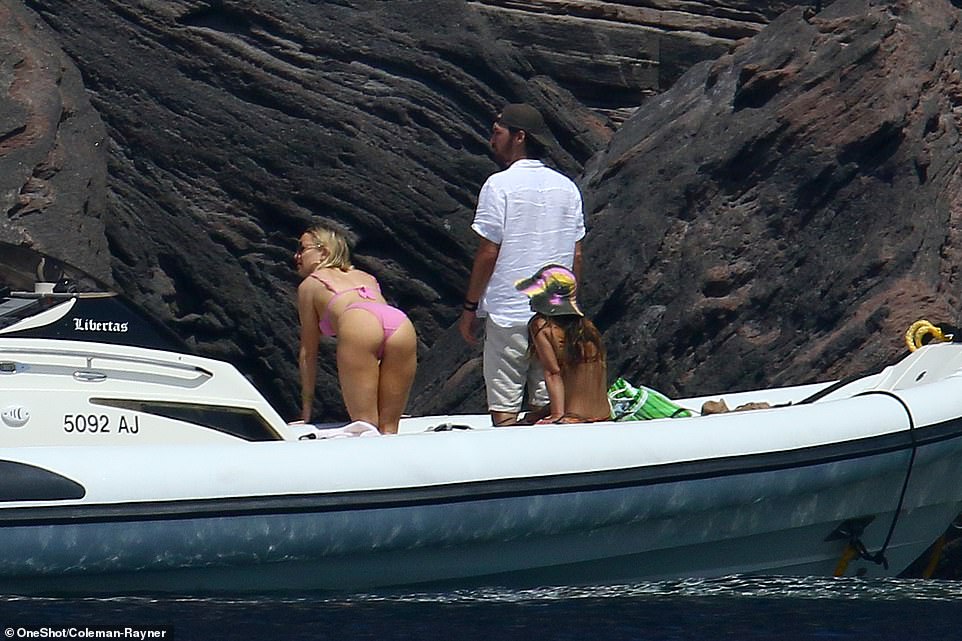 Making a splash! The actress put on a cheeky display as she gazed at the Italian coastline in her hot pink bikini 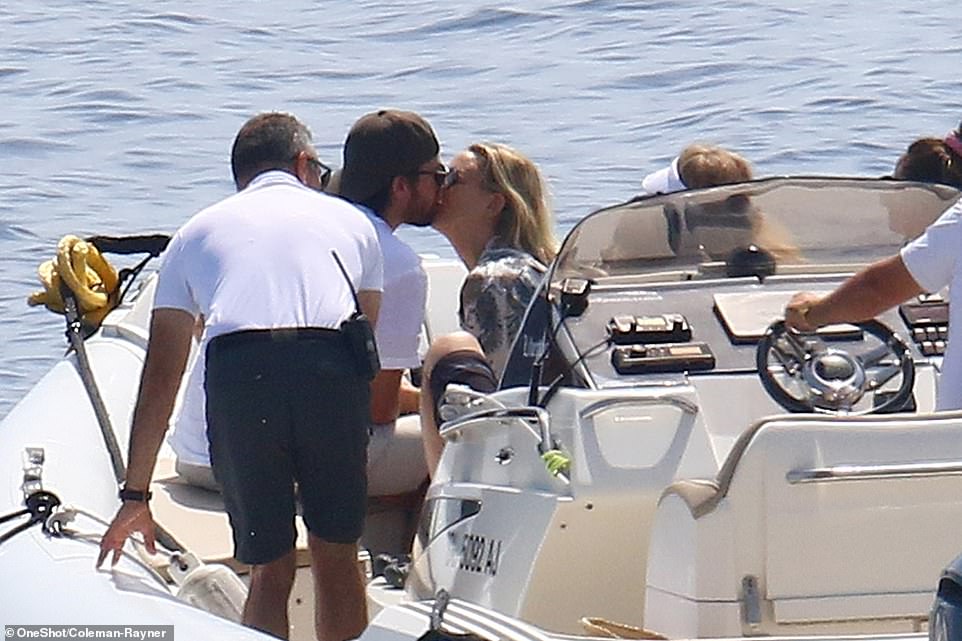 All aboard the love boat! Hudson shared a kiss with her boyfriend Danny Fujikawa 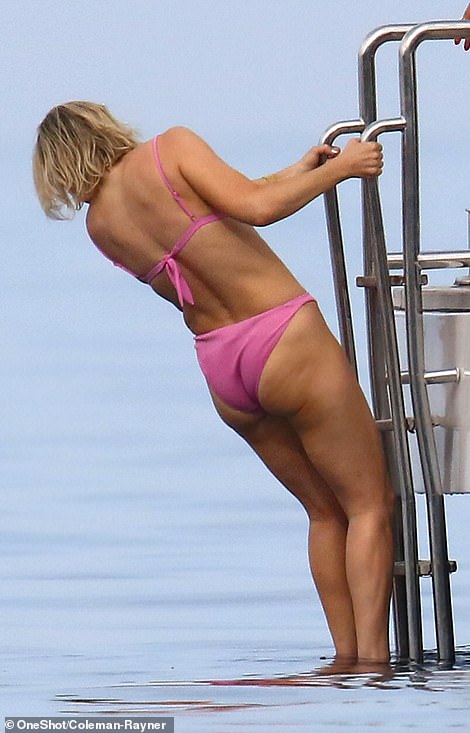 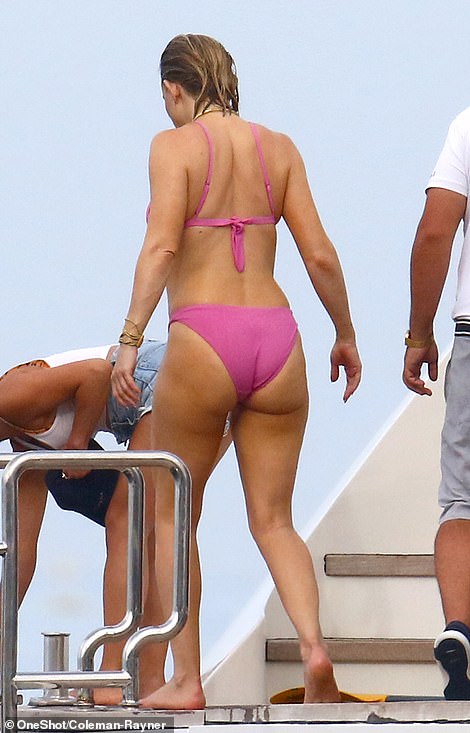 Splish splash! The actress appeared to carefully make her way into the water 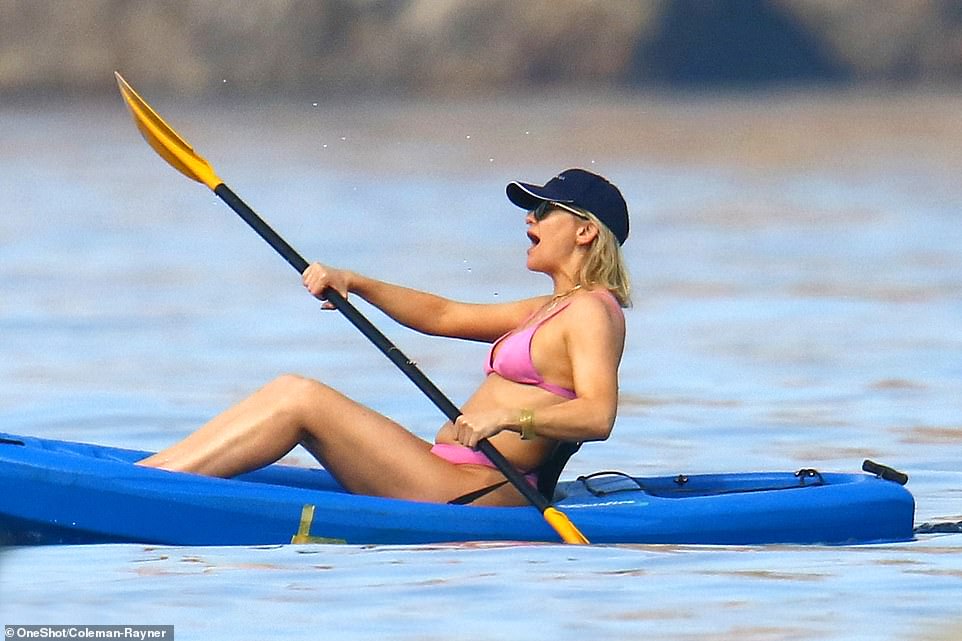 Ahoy there! Kate called out to her pals from the kayak 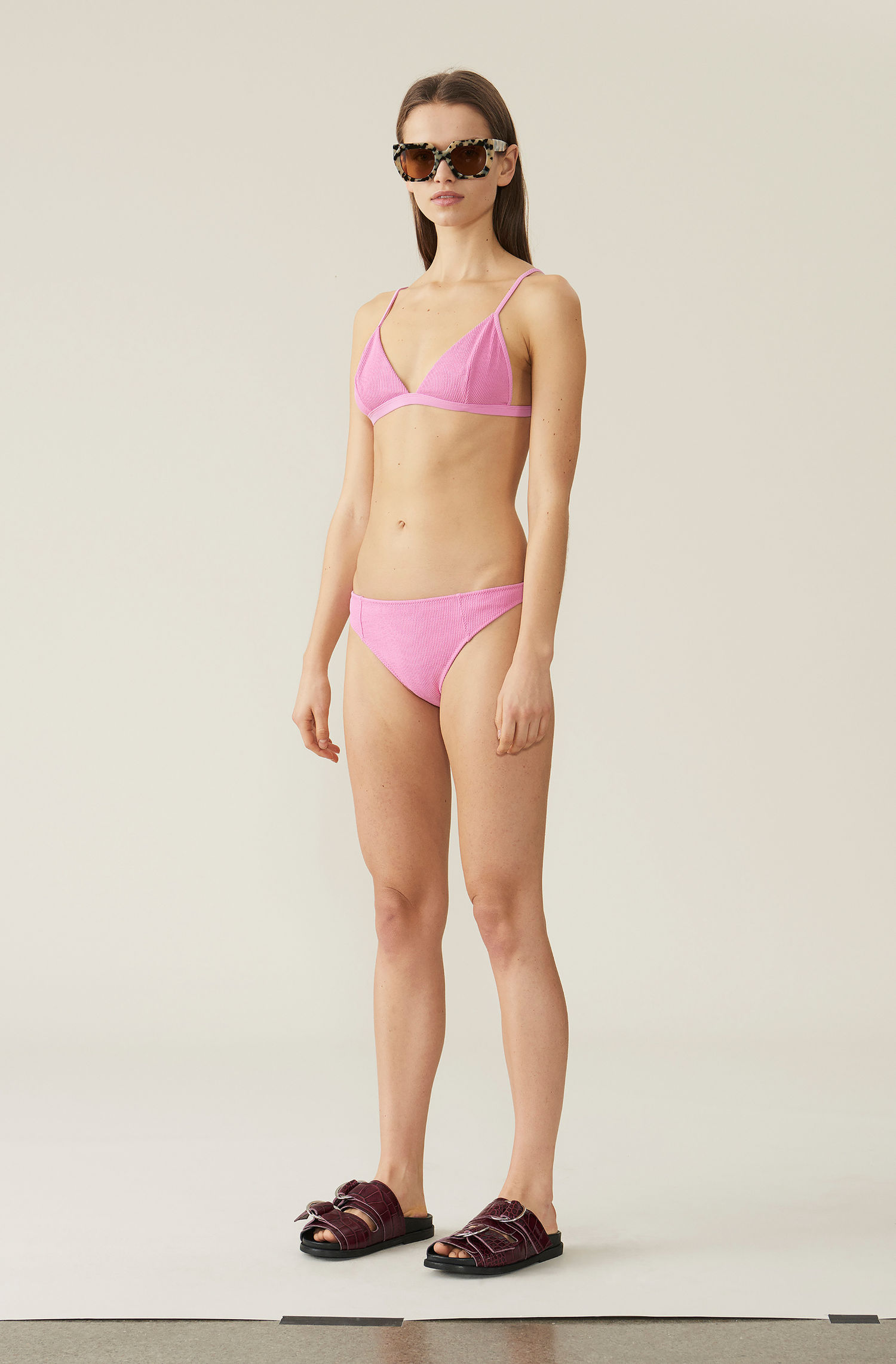 Goldie and her partner Kurt Russell also joined Kate for her explorations, and were spotted climbing into the boat as well.

The Overboard actress enjoyed a rejuvenating dip in the sea in her chic black bathing suit.

Meanwhile, Kate continued to admire the cliff side from on board the boat, looking relaxed and content as she soaked up the sun with her beau by her side. 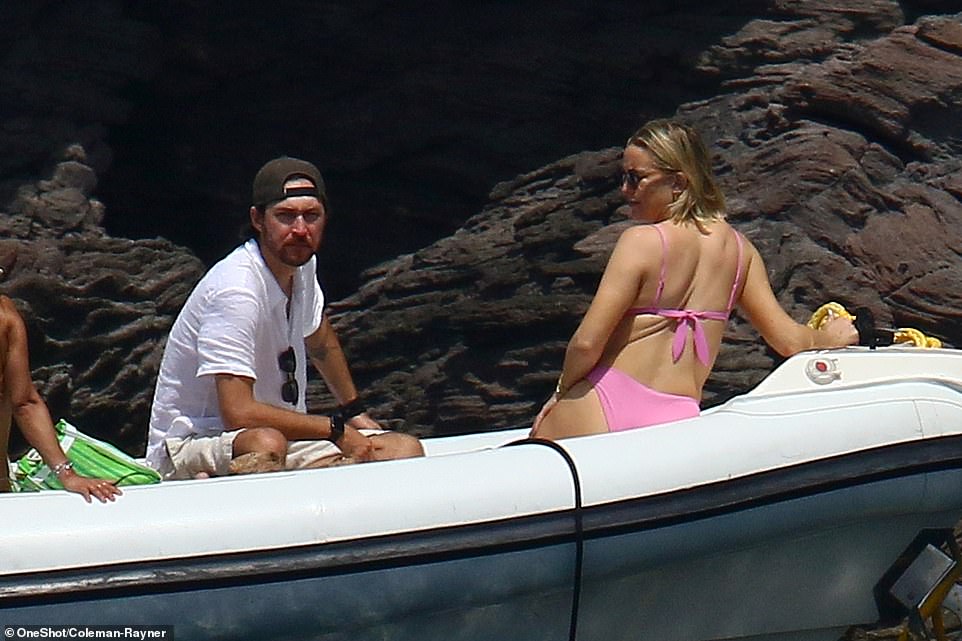 Soaking up the sun: The actress simultaneously enjoyed the scenic surroundings while topping up her tan 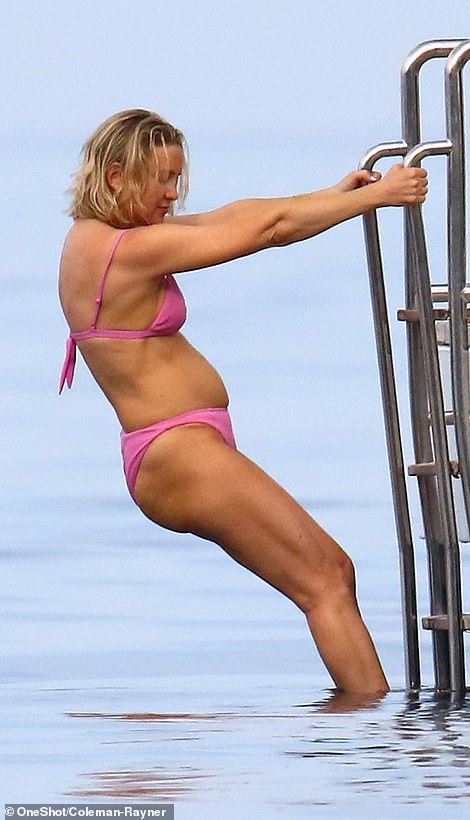 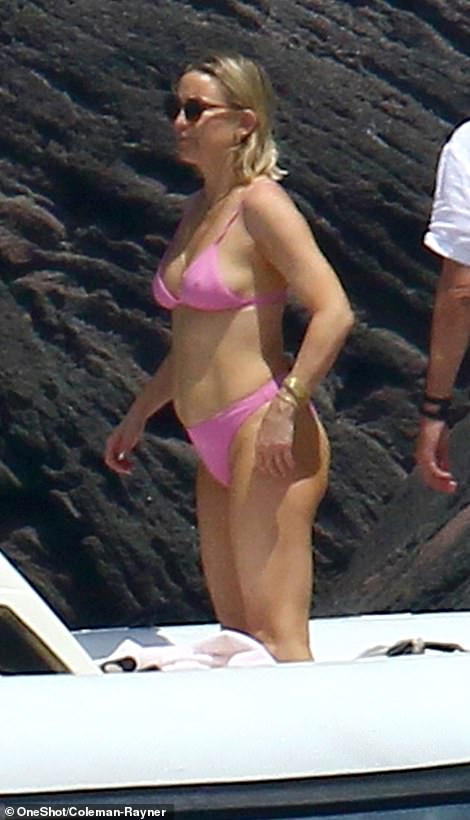 Kate, Goldie, and Kurt also took in the sights by kayak.

Kate was the picture of relaxation as she paddled through the sea wearing her hot pink bikini and blue hat.

Meanwhile, Goldie and Kurt appeared serene as they navigated their way through the water on board a separate kayak. 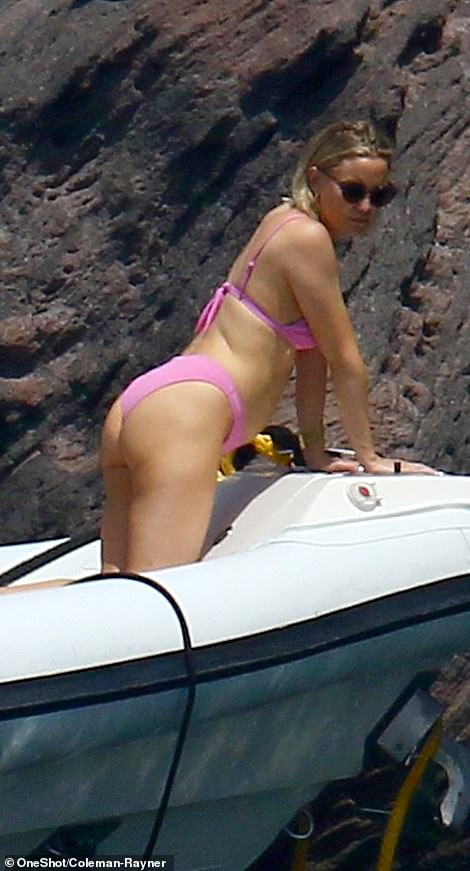 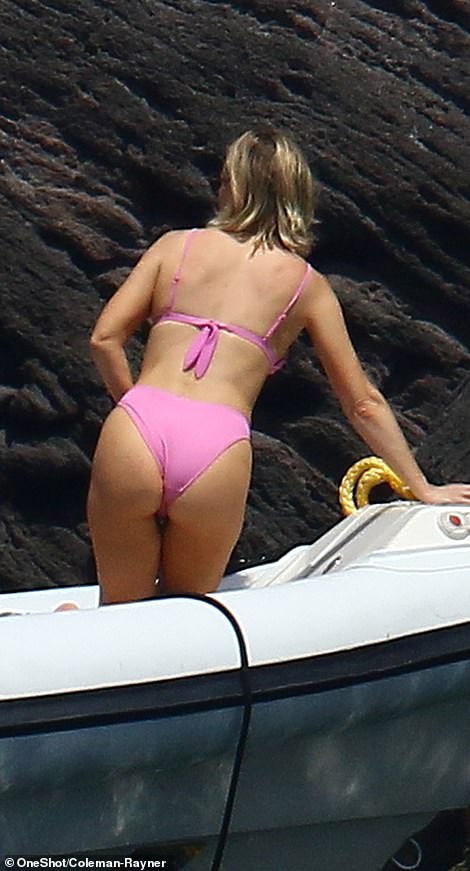 Ciao bella! Hudson looked serene and content as she enjoyed yet another day of her Italian getaway 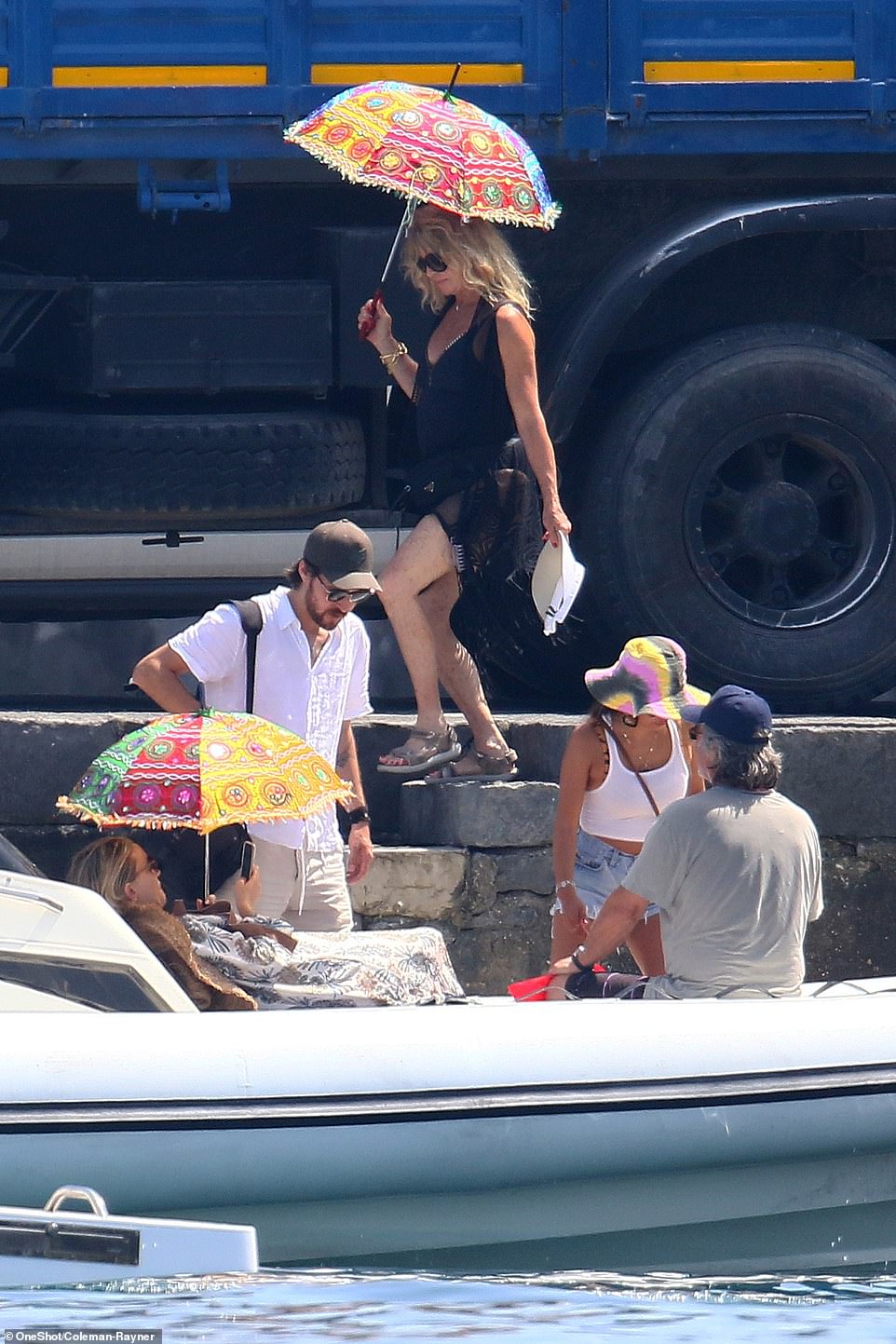 Under her umbrella! Hudson lounged beneath a boho chic umbrella and scrolled through her phone as her family climbed on board the boat 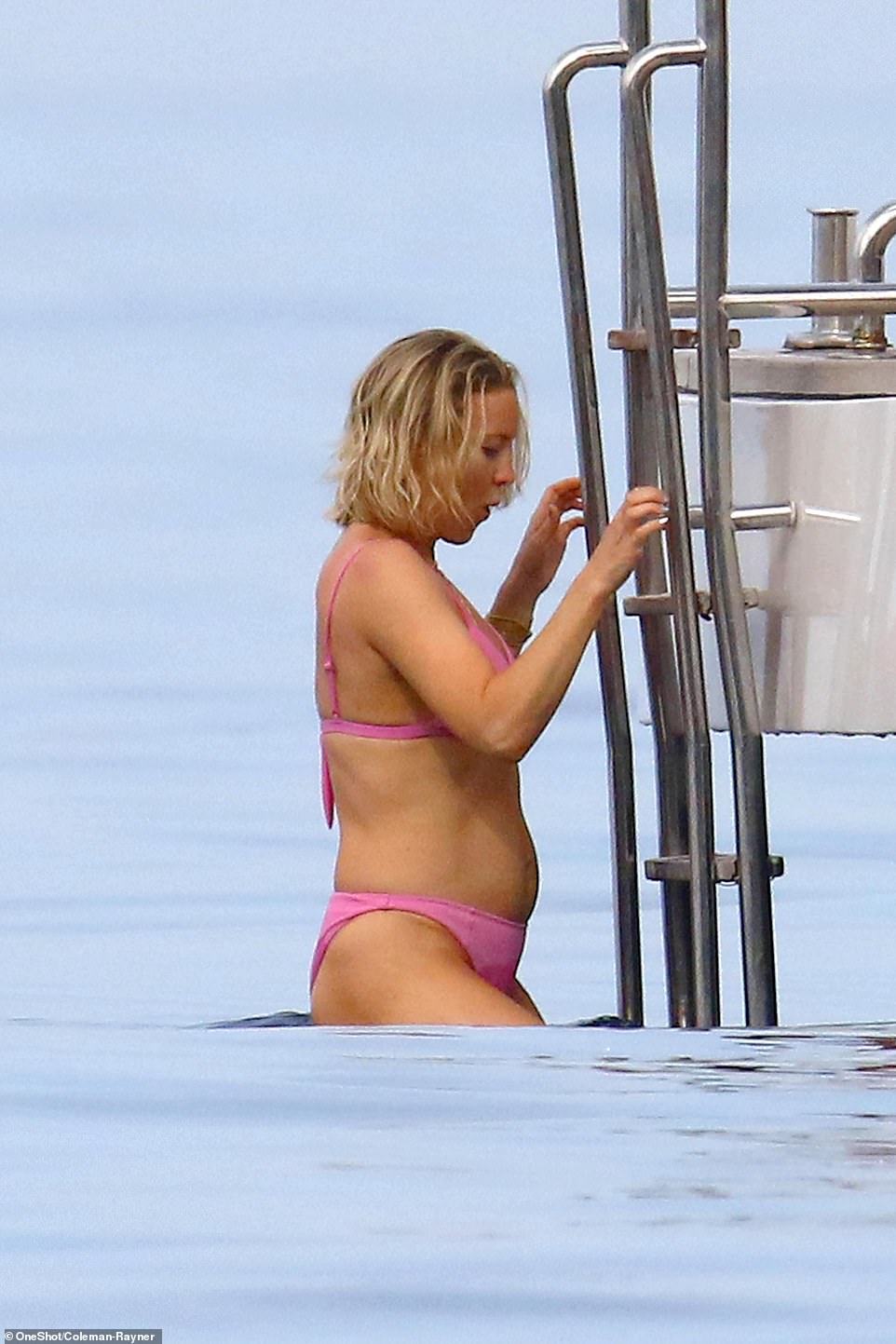 Is the water cold? Kate reacted as she plunged into the water 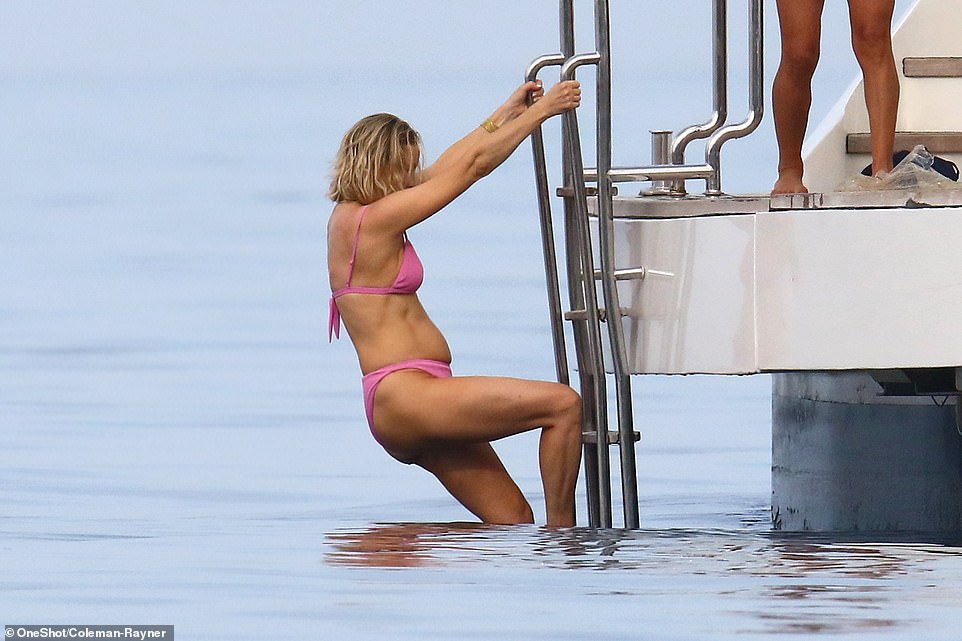 Step by step: The How To Lose A Guy In 10 Days star carefully climbed down the ladder 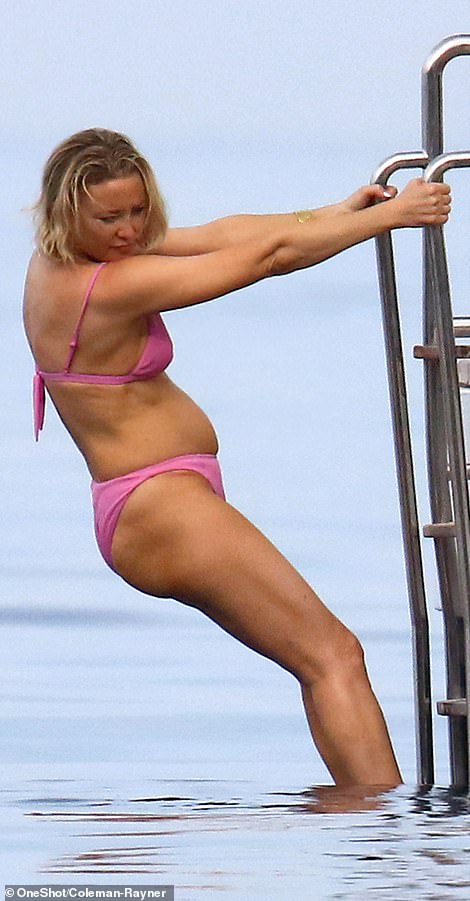 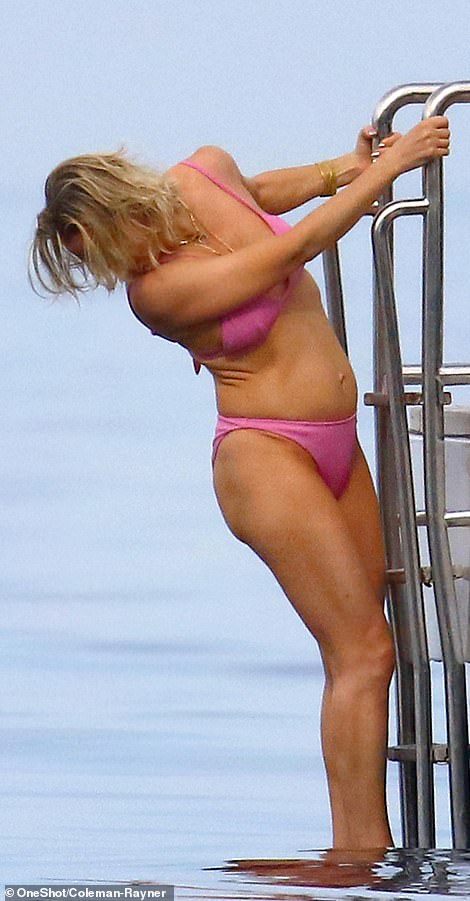 Taking the plunge: Hudson appeared to be taking her time getting into the water 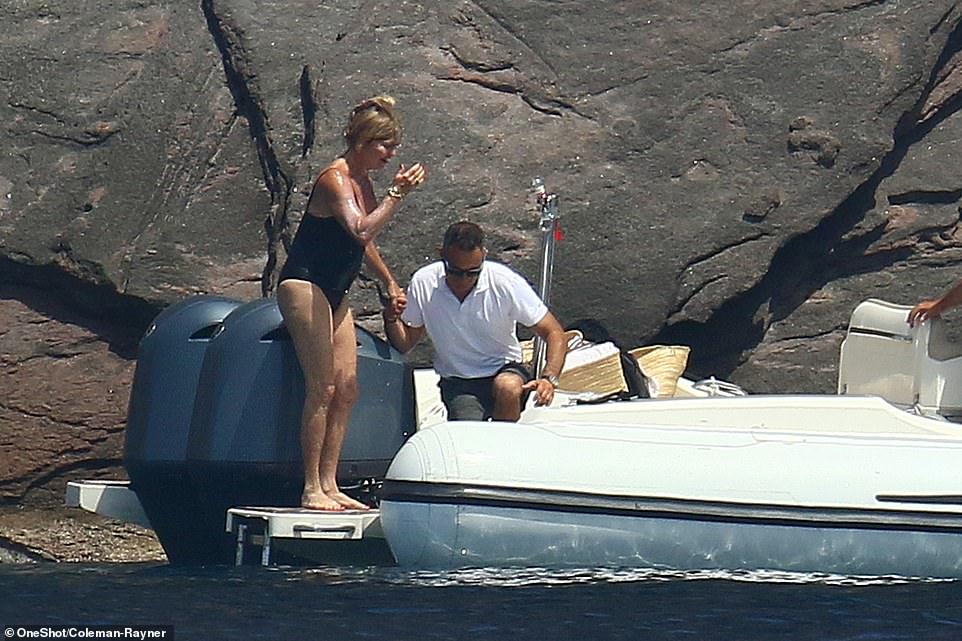 Overboard! The actress enjoyed a refreshing dip in the sea

The fun continued on board the yacht, where Kate climbed into the water.

Appearing slightly hesitant, the actress appeared to be testing out the temperature of the water before jumping right in.

Kate has been documenting her adventures abroad on social media, where she’s been posting envy-inducing snaps of all the fun she’s been having in Italy. 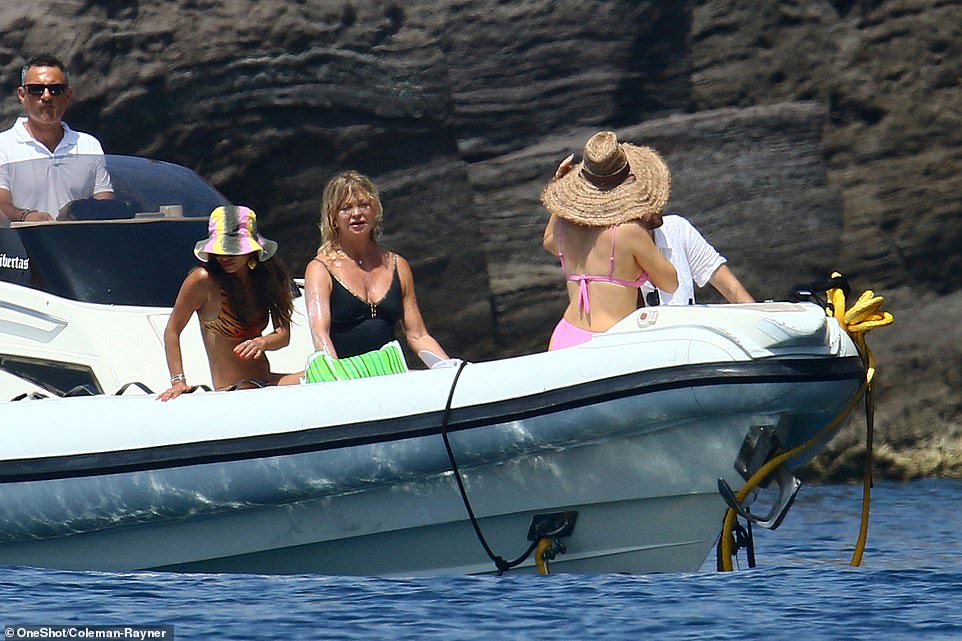 Hat’s off to her! Using a wide-brim hat, Kate stayed protected from the summer sunshine 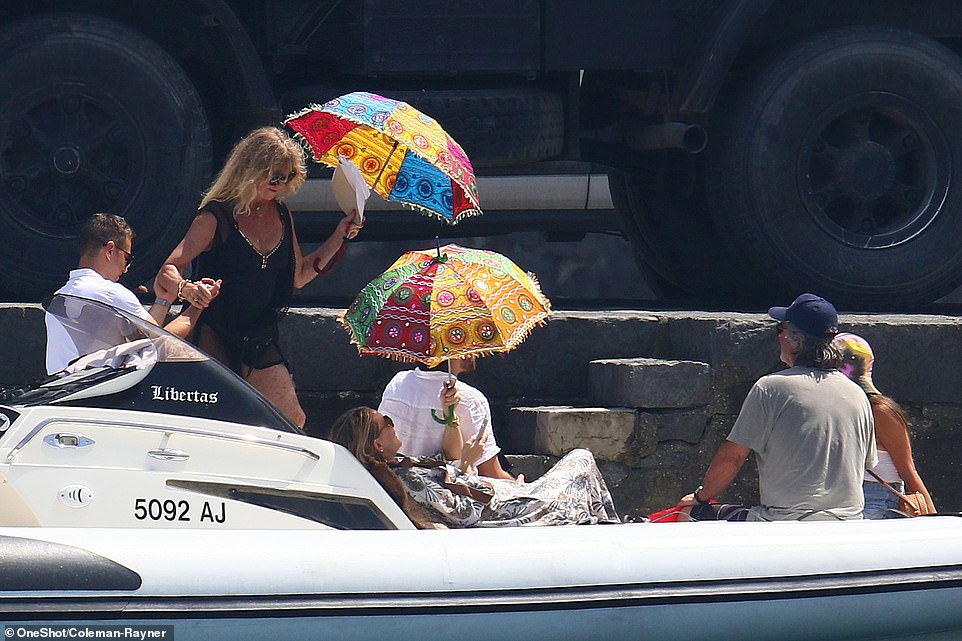 After you! A crew member helped Hawn onto the boat 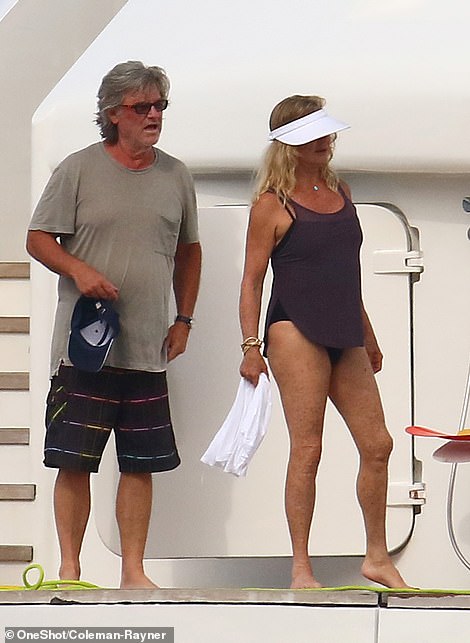 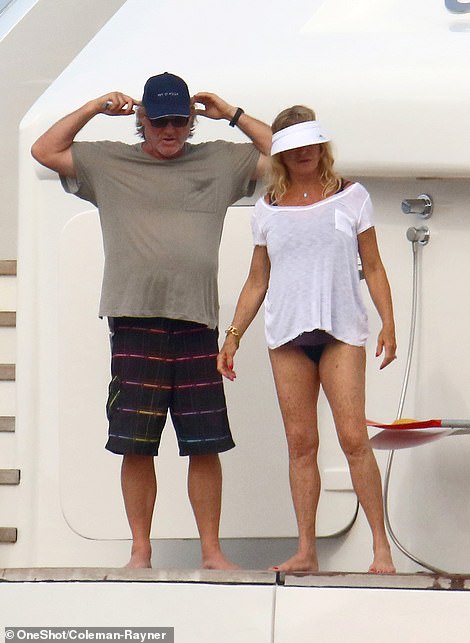 Summer style: The couple dressed down for their day at sea, opting for shorts and tees 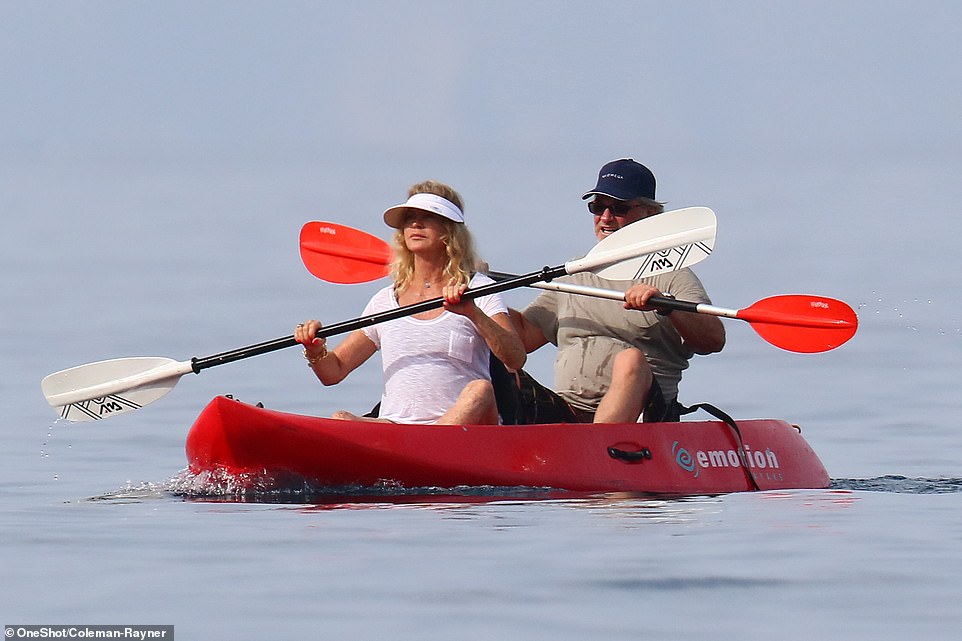 Teamwork! Hawn and her partner paddled through way through the sea

Danny celebrated his 33rd birthday during their Italian getaway, and proud girlfriend Kate couldn’t resist giving him a loving shout-out on social media.

‘This man has given me the most beautiful gifts life can give and the depth of gratitude I feel for the day he was born is beyond any measured spoken word or post. I believe that this gratitude exists and is present in our daughters joy and her magical spirit.

‘Thank you Mama Fuj and Papa Fuj for raising this beautiful roller coaster ride of a special human. The ups and downs and sideways were all worth it… Happy Birthday baby! @swimswammyslippyslappy I love you.’ 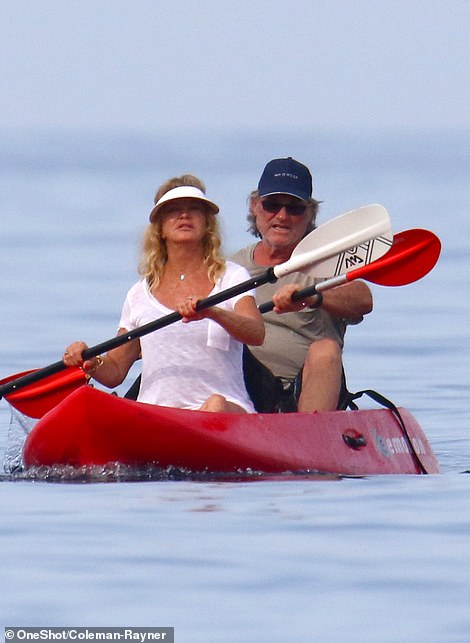 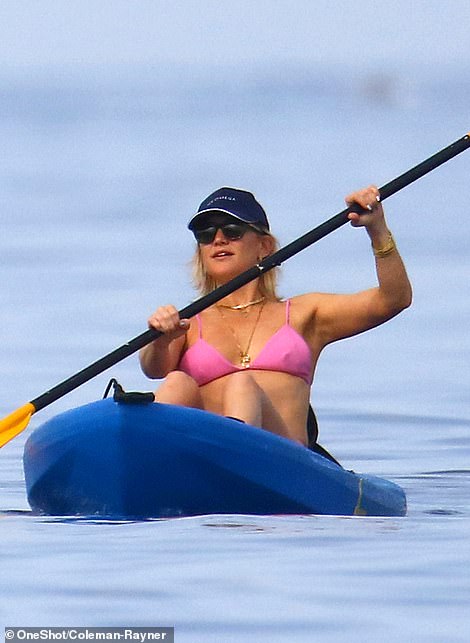 Family affair: The whole family enjoyed a day of kayaking on top of their yacht explorations 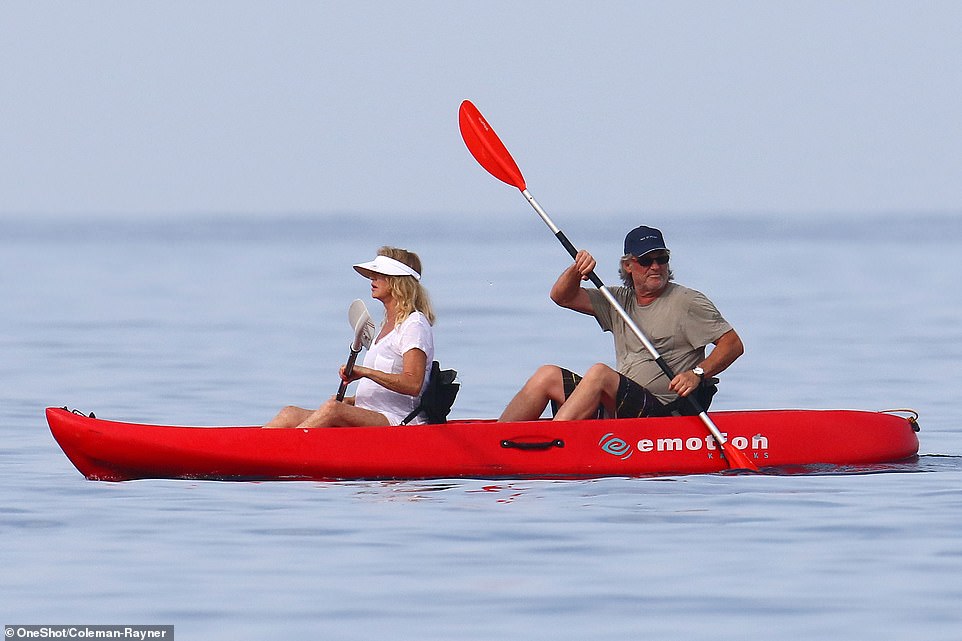 Slow and steady: The couple appeared to be taking their time in the kayak

The birth of Rani made Kate a mother of three, as the actress also has 15-year-old son Ryder Robinson with ex-husband Chris Robinson and seven-year-old son Bingham Bellamy with ex Matt Bellamy.

A few months after giving birth to Rani, Kate became an ambassador for Weight Watchers.

‘It came at a perfect time for me,’ the Fabletics co-founder told People at the time of her unveiling. ‘It’s hard when you have babies. Everyone comes before you, and you have to find that time to just focus in on yourself.’

Along with the desire to lose ’25 pounds,’ Kate went on to explain that her values fully align with WW.

‘One of my passions in life is wanting people to live their most optimum life, whether it be in health or in happiness,’ she said.

‘And I think that one of the number one things for that is finding a community that can support you. WW is, to me, the perfect community for that.’ 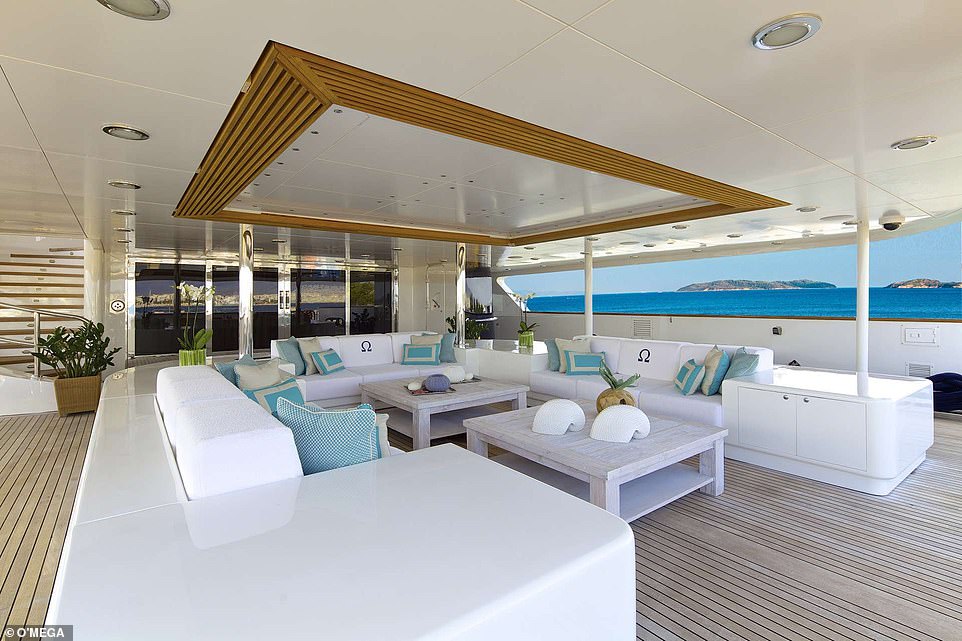 Best of the best: The lavish O’Mega yacht the family are enjoying a cruise on (stock photo) 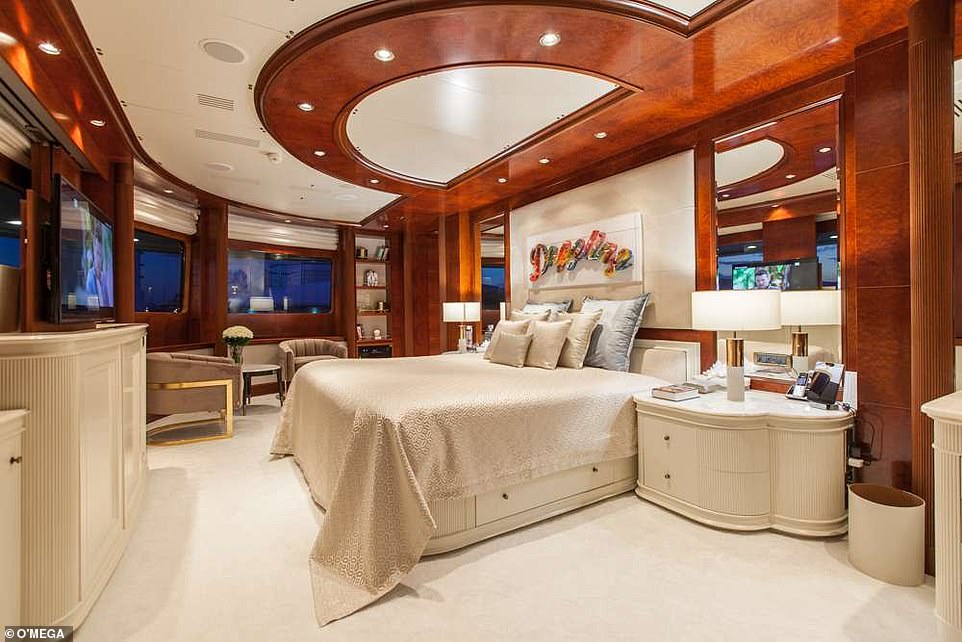 Sweet dreams: Guests can snooze to their heart’s content inside the boat’s luxurious bedroom