She’s one of the most famous supermodels in the world.

And Kate Moss looked sensational as she opted to go make-up free during her stroll through Soho in London with a friend on Thursday.

The fresh-faced model, 46, put on an effortlessly chic display as she paired a simply black top with a polka-dot faux-leather skirt. 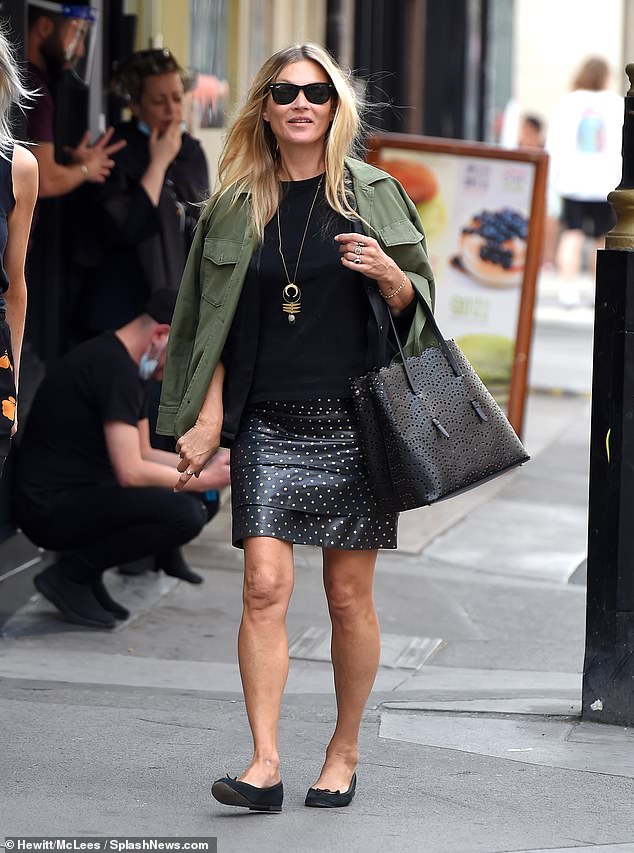 Stunning: Kate Moss looked fresh-faced as she went make-up free while enjoying a stroll in Soho, London, with a friend on Friday

Kate shrugged on an olive-green jacket over her shoulders, and accessorised her look by wearing a dangling pendant necklace.

She stepped out in a pair of simple ballerina shoes and kept her personal items in a large black handbag that had an intricate scallop print.

Kate’s golden locks were brushed into a sleek, straight style and the model ensured she kept a low profile during her outing by wearing a pair of black shades. 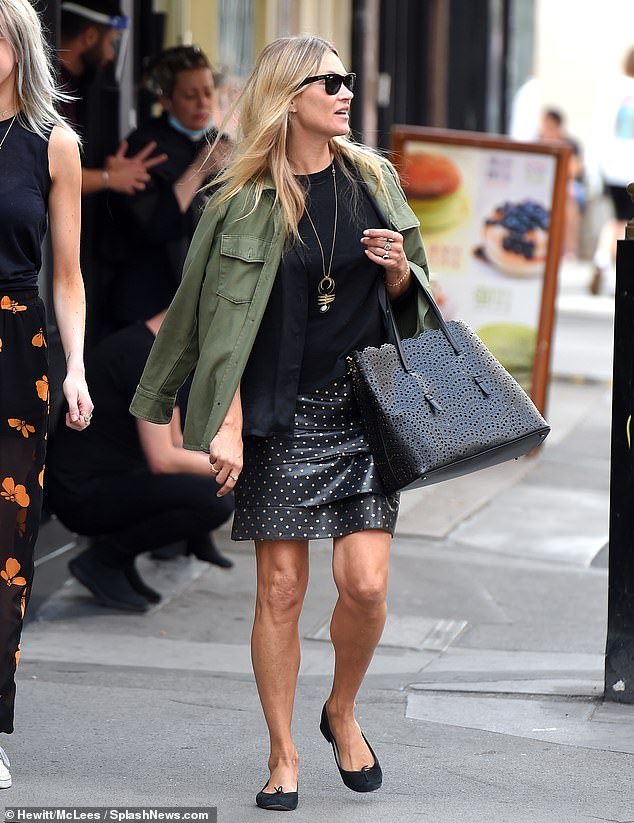 Stylish: The model put on an effortlessly chic display as she paired a simply black top with a polka-dot faux-leather skirt 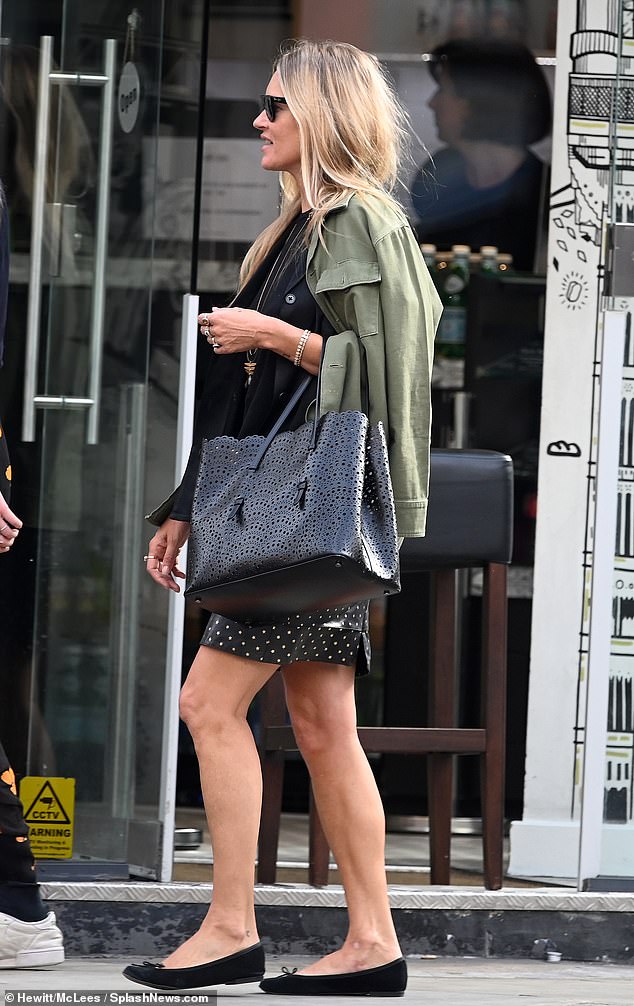 Fashionista: Kate shrugged on an olive-green jacket over her shoulders, and she kept her personal items in a black handbag 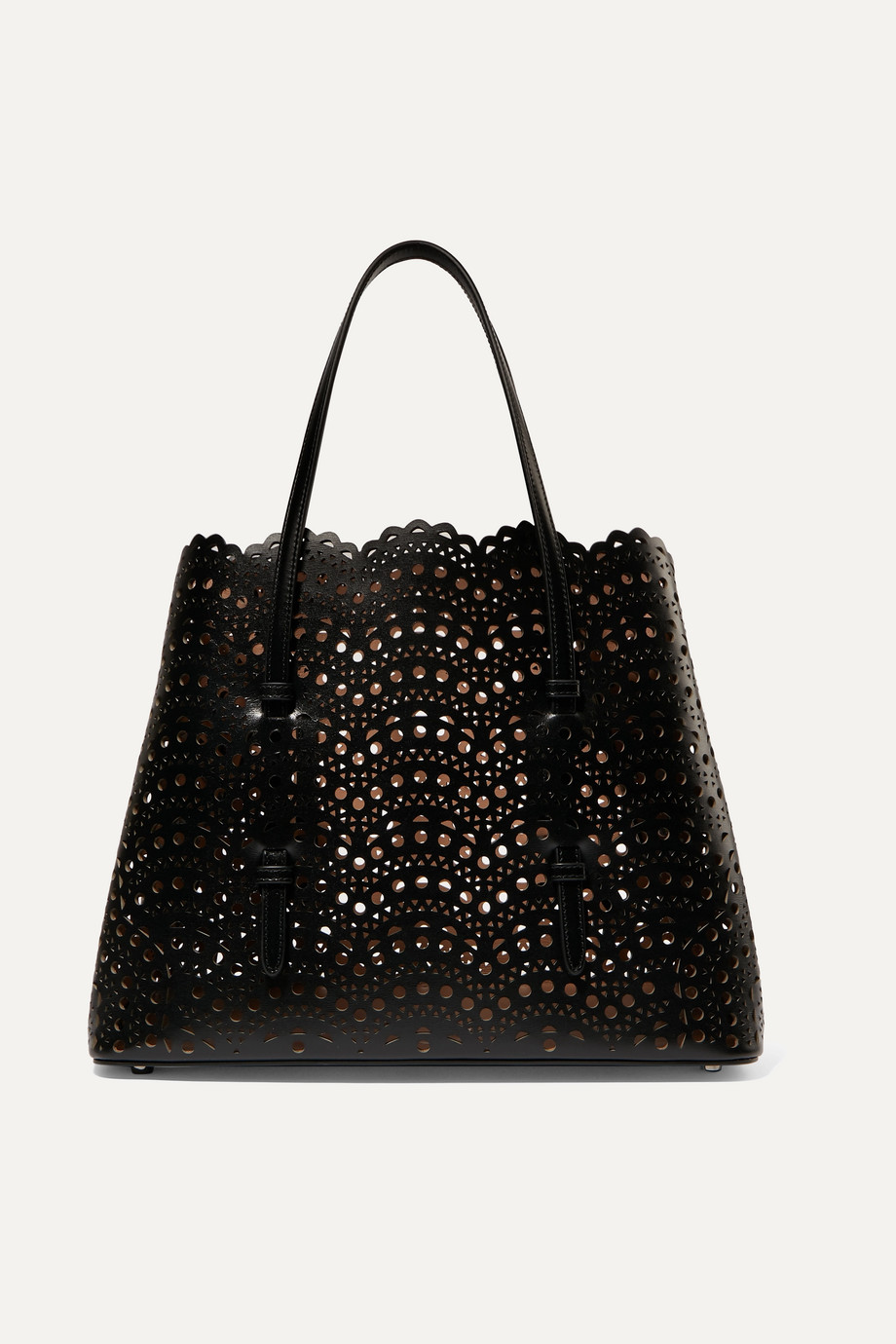 After putting her boozy benders behind her years ago, Kate recently said she now prefers to balance her life with yoga and enjoys watching Netflix before bed.

Two years ago, she told NBC’s Megyn Kelly: ‘I take care of myself now, I’m a good girl. I go to bed, I drink lots of water, not too much coffee, and I’m trying to cut down on cigarettes.’

In the mid-90s, the mother-of-one spent her days moving from the catwalk to the bar, with The Groucho Club, The Ivy and her friends’ luxurious pads in NW1 all second homes.

After attending a week-long detox in Turkey back in June 2015, the runway sensation wound up being escorted off an easyJet flight home after her airport drinking session took a heavy turn.

She changed her ways in 2018, telling NBC interviewer Megyn Kelly: ‘I go to bed, I drink lots of water, not too much coffee, and I’m trying to cut down on cigarettes.’

And last month she told Elle: ‘I hit the sack at 11pm-ish and watch Netflix before I go to sleep.

‘I deal with stress by doing yoga. It helps me concentrate on the here and now.’

She has been spending lockdown with her half-sister Lottie, daughter Lila and boyfriend Count Nikolai von Bismarck, 33, at her ten bedroom mansion in the Cotswolds. 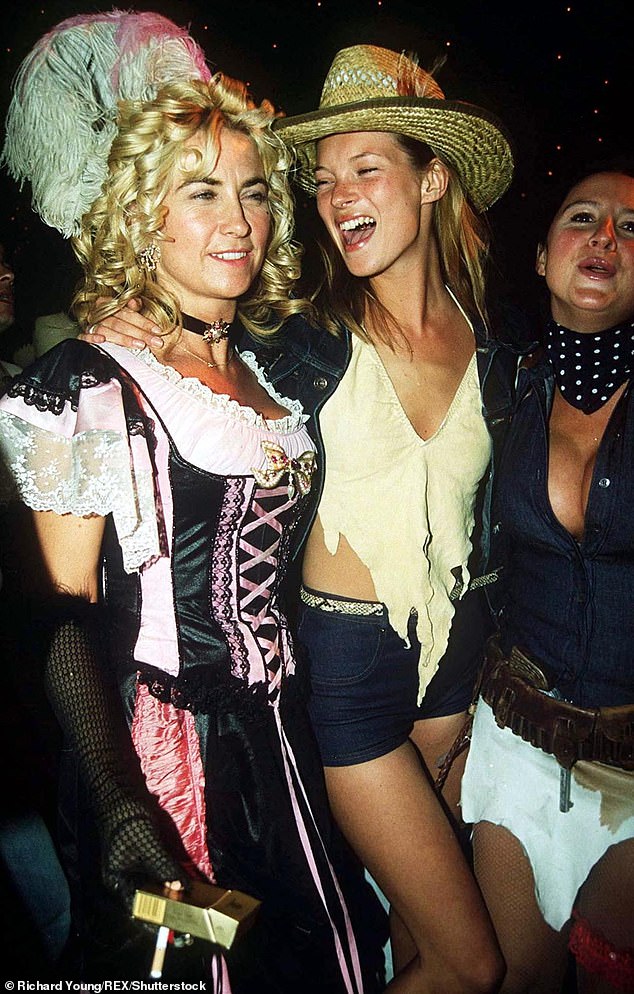 Pinnacle moment: Kate, pictured in 1997 with Meg Mathews (left) has been sober for two years, and quit alcohol after being escorted off a flight following an airport drinking session in 2015