She’s recovering from breaking her feet and ankles in a freak accident in Turkey.

But, Katie Price, 42, slipped into a red swimsuit and donned a pair of fins as she went snorkelling with beau Carl Woods, 31, in the Maldives, on Thursday, after attending her latest bankruptcy hearing via zoom from a luxury resort in the Indian Ocean.

The glamour model displayed very sore looking knees, likely due to moving around on her knees, as she still unable to walk due to her horrific injuries. 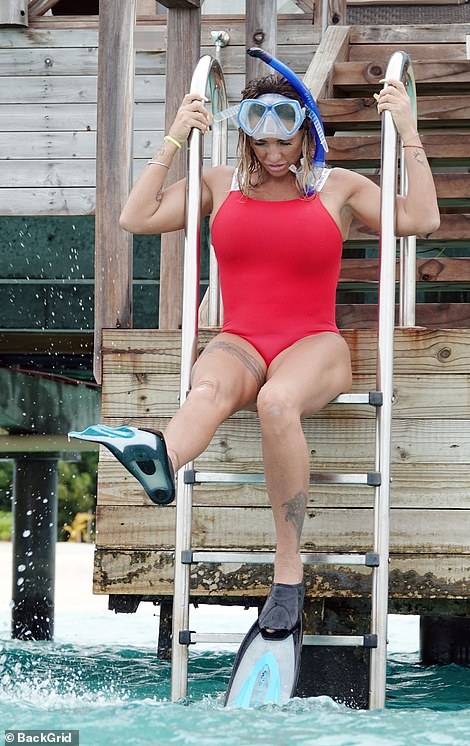 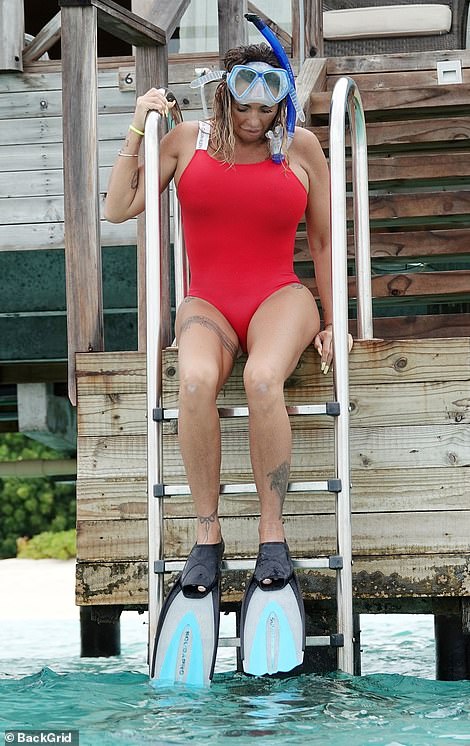 Fun in the sun: Katie Price, 42, displayed very sore looking knees as she slipped into a red swimsuit and donned a pair of fins to go snorkelling in the Maldives, on Thursday

Katie slowly lowered herself into the water by edging herself off a step metal ladder with the help of Carl.

The make-up free star displayed her bronzed body and numerous tattoos in the Baywatch-style swimwear and the duo’s pearly white veneers couldn’t be missed.

Carl showed off his half-body inkings while clad in a light blue pair of swim shorts, and was extremely attentive to Katie’s needs as she struggled to move from dry land into the sea.

The loved-up pair swam alongside each other as they searched for underwater wildlife. 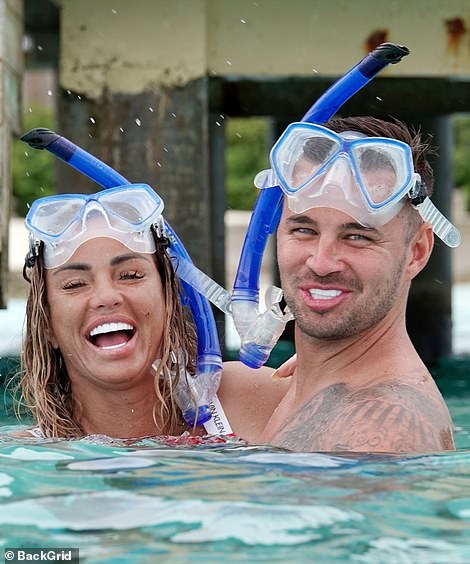 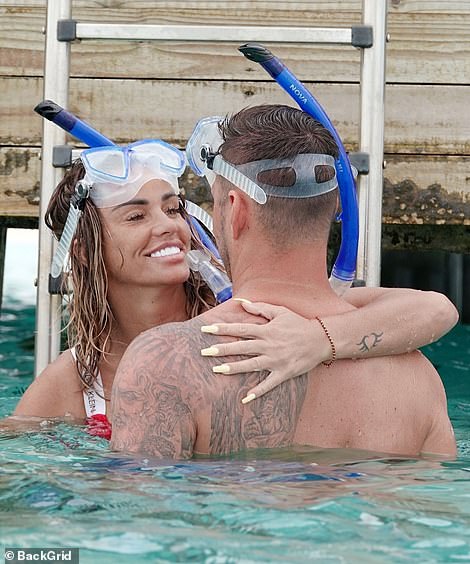 The happy couple: The glamour model couldn’t hide her delight as she cosied up to beau Carl Woods, 31, while in the torquoise waters 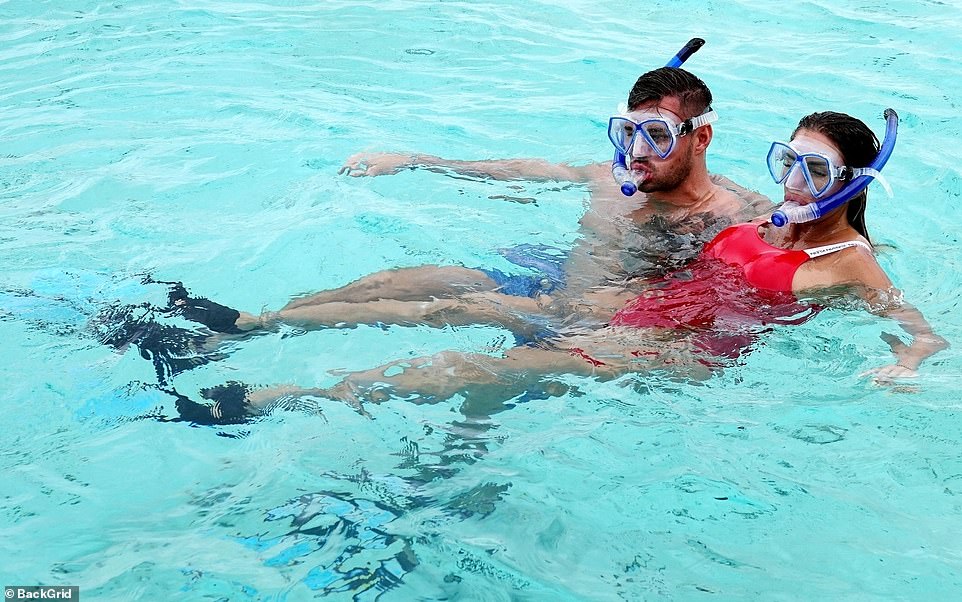 Breathing easy: Katie and Carl relaxed together as they took a break from snorkelling 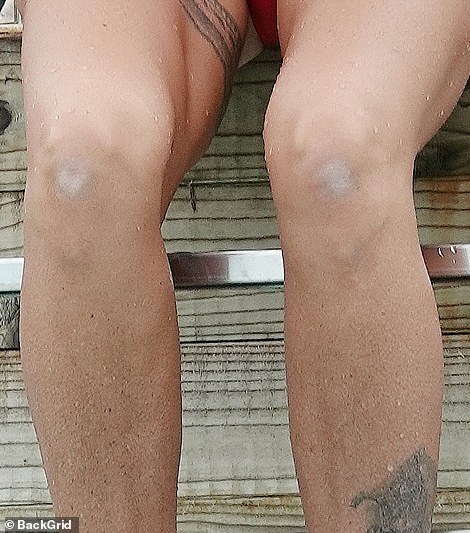 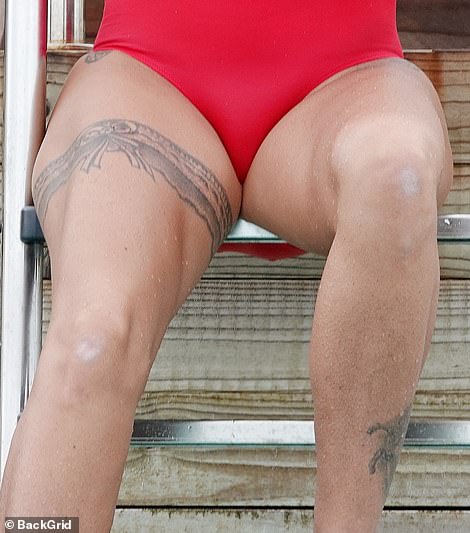 Katie, who has been in a wheelchair since July, is understood to have used her getaway in the Maldives to plan her comeback for 2021.

According to a recent report, she is expected to ‘get engaged to boyfriend Carl Woods by the end of the year’ after ‘breaking her feet and ankles has made her to take stock of what matters.’

The mother-of-five has reportedly ‘made clear’ to Carl that ‘she wants to build a new life with him and the kids’ as she finalises her divorce from Kieran Hayler.

According to The Sun, Katie told a friend: ‘I’ve got big plans. I want to kick the a*** out of this year and then make next year one to remember.’

A friend told the publication: ‘Marrying Carl is a big part of her plans,’ and the pair are also believed to have business ideas for modelling, fitness and TV, according to the source.

MailOnline contacted Katie Price’s representative for comment at the time. 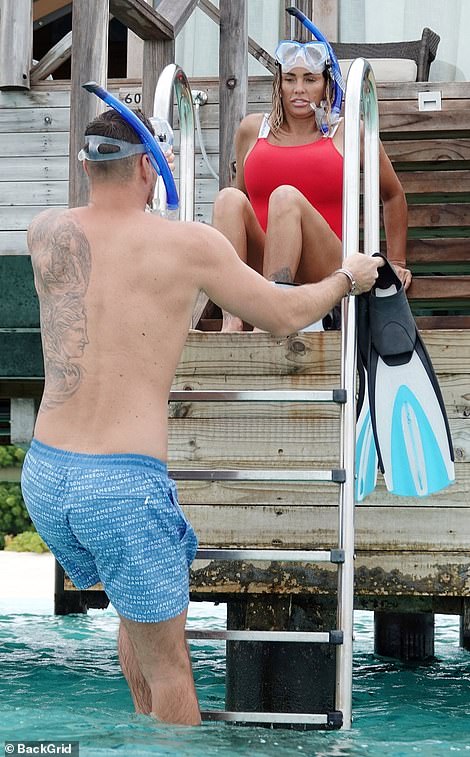 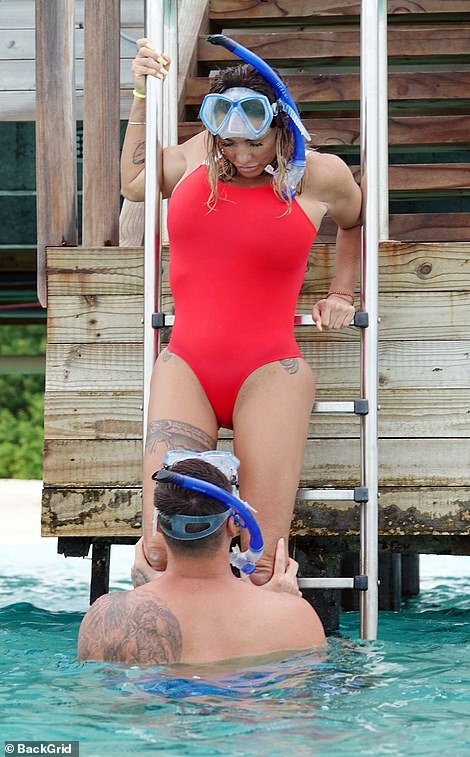 Slowly does it: Katie slowly lowered herself into the water by edging herself off a step metal ladder with the help of Carl 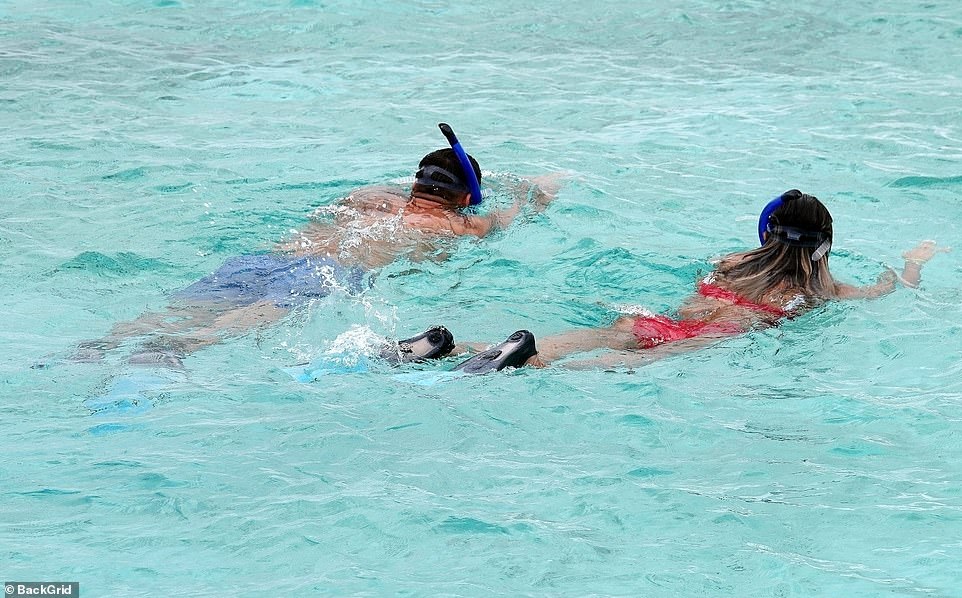 Quality time: The loved-up pair swam alongside each other as they searched for sealife 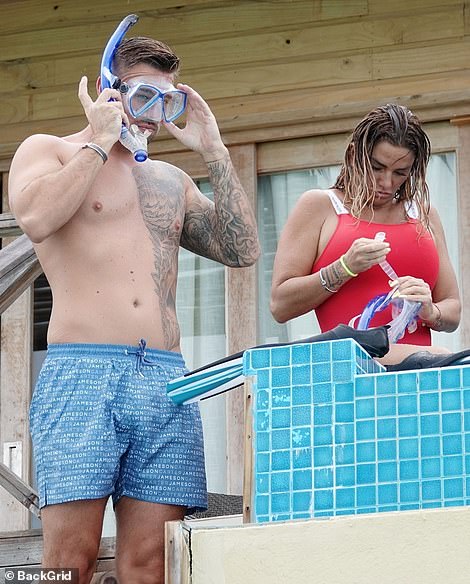 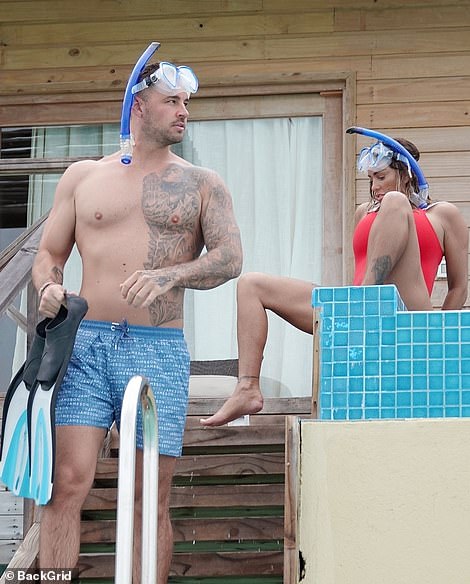 Tatted: Carl showed off his half-body inkings while clad in a light blue pair of swim shorts 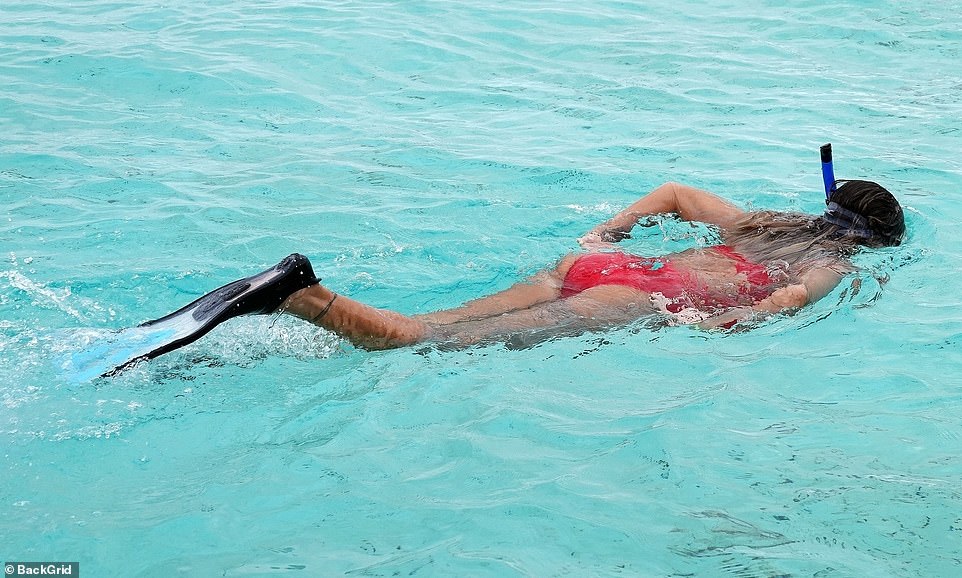 In her element: Free from her wheelchair, Katie indulged in searching for sealife as she kicked about in her fins and snorkel

Last month a representative confirmed that Katie was set to sign her divorce papers within days after proceedings had slowed when Katie went to The Priory.

The model married husband number three, former stripper Kieran, in 2013 and the pair share children Jett, seven and daughter Bunny, five. They split in May 2018.

Her getaway to the Maldives came after she recently sparked engagement rumours with her beau, of just a few months, after revealing, ‘I’ve said yes to everything’, during their tropical getaway.

Earlier this week, the TV star had uploaded a snap of her partner alongside a gushing tribute that read: ‘I’ve said yes to everything @carljwoods your actually any girls dream come true and I’ve got you all to myself forever.’

The Brighton native returned to court after someone ‘anonymously tipped the court off’ about her multiple holidays, lavish lifestyle and Instagram advertising.

She attended Tuesday’s hearing via zoom as she is staying at five-star resort You & Me Maldives, with rooms coming with a price tag of an eye-watering £1,400-a-night. 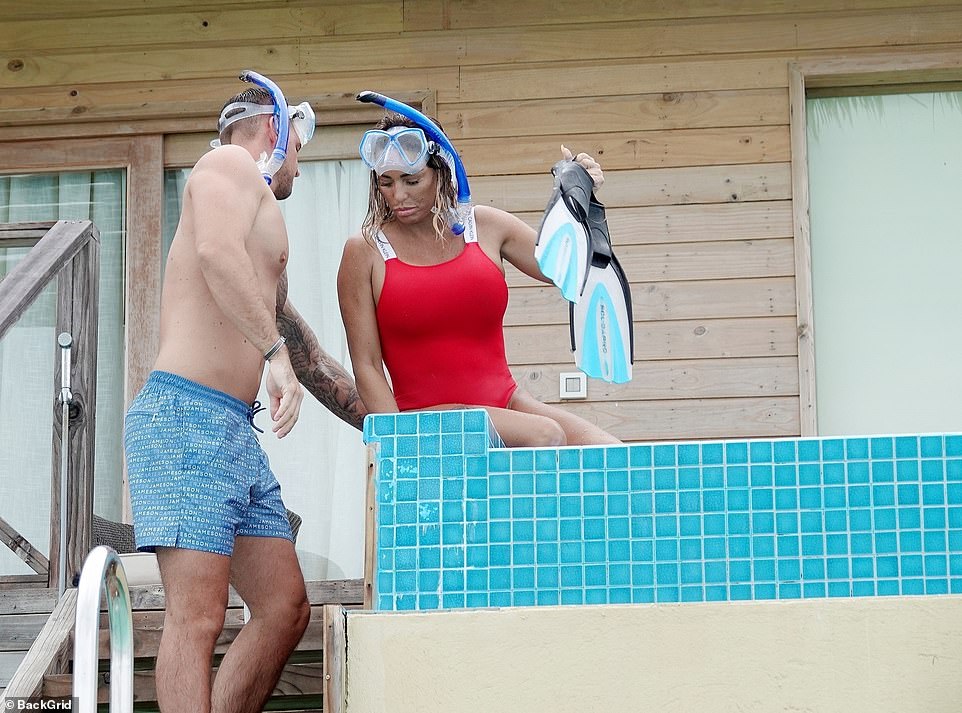 It’s a process: Carl ensured that Katie was safe as she moved from their outside pool and attempted to get herself into the sea 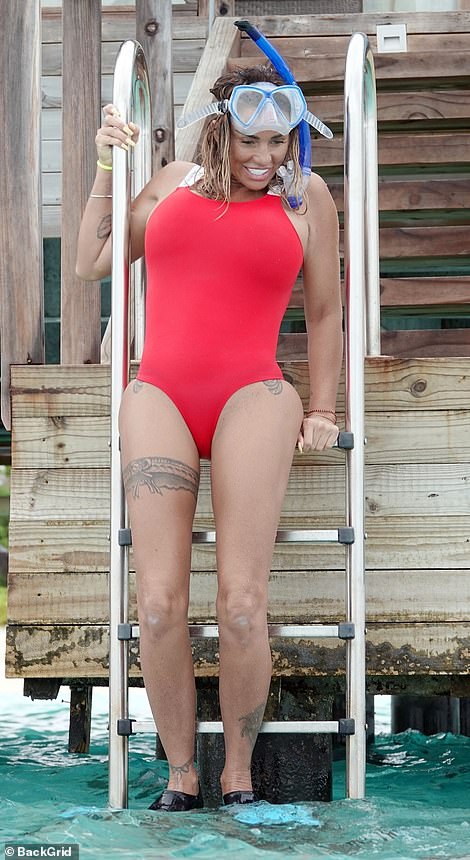 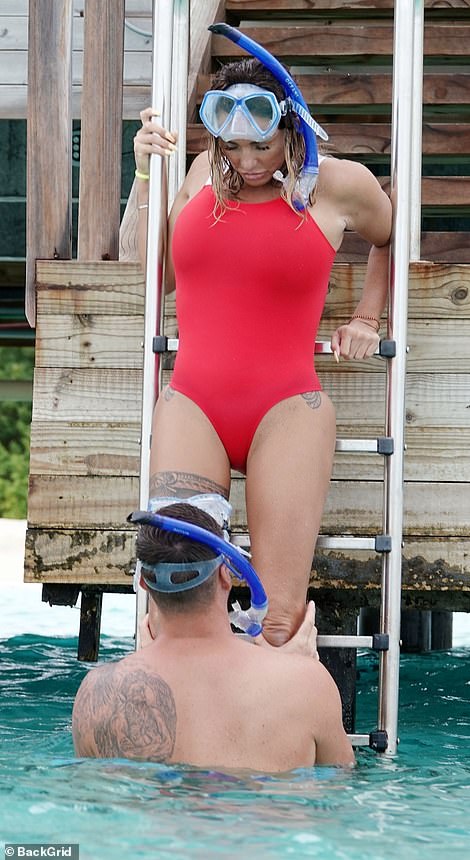 Happy lady: Katie couldn’t hide her delight as she neared the water

Ahead of the hearing, a source told The Sun: ‘Katie’s told her team that she can attend by Zoom from her Maldives holiday.

‘She doesn’t see a problem with it – she’s taking the whole thing very seriously – and says the holiday’s not an issue as Carl paid for the holiday.’

Since she was declared bankrupt in November last year, the former Page 3 star has enjoyed holidays to Turkey, New York, Spain and Thailand.

Her bankruptcy came after the High Court found she had failed to stick to a plan to repay her debts, estimated to be around £800,000.

The businesswoman is reportedly not due to be discharged from her bankruptcy until next month and is supposed to pay any money she makes to creditors.

This includes both money that she makes through work or any income from selling her belongings. 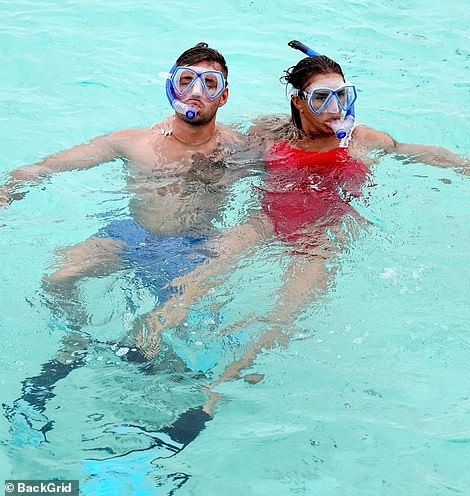 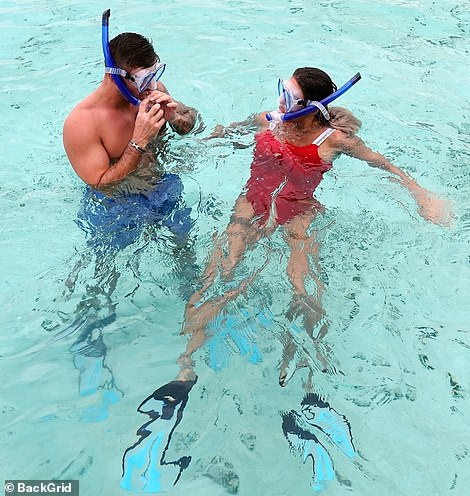 One for the family album: The care-free couple waded about while wearing their snorkel gear 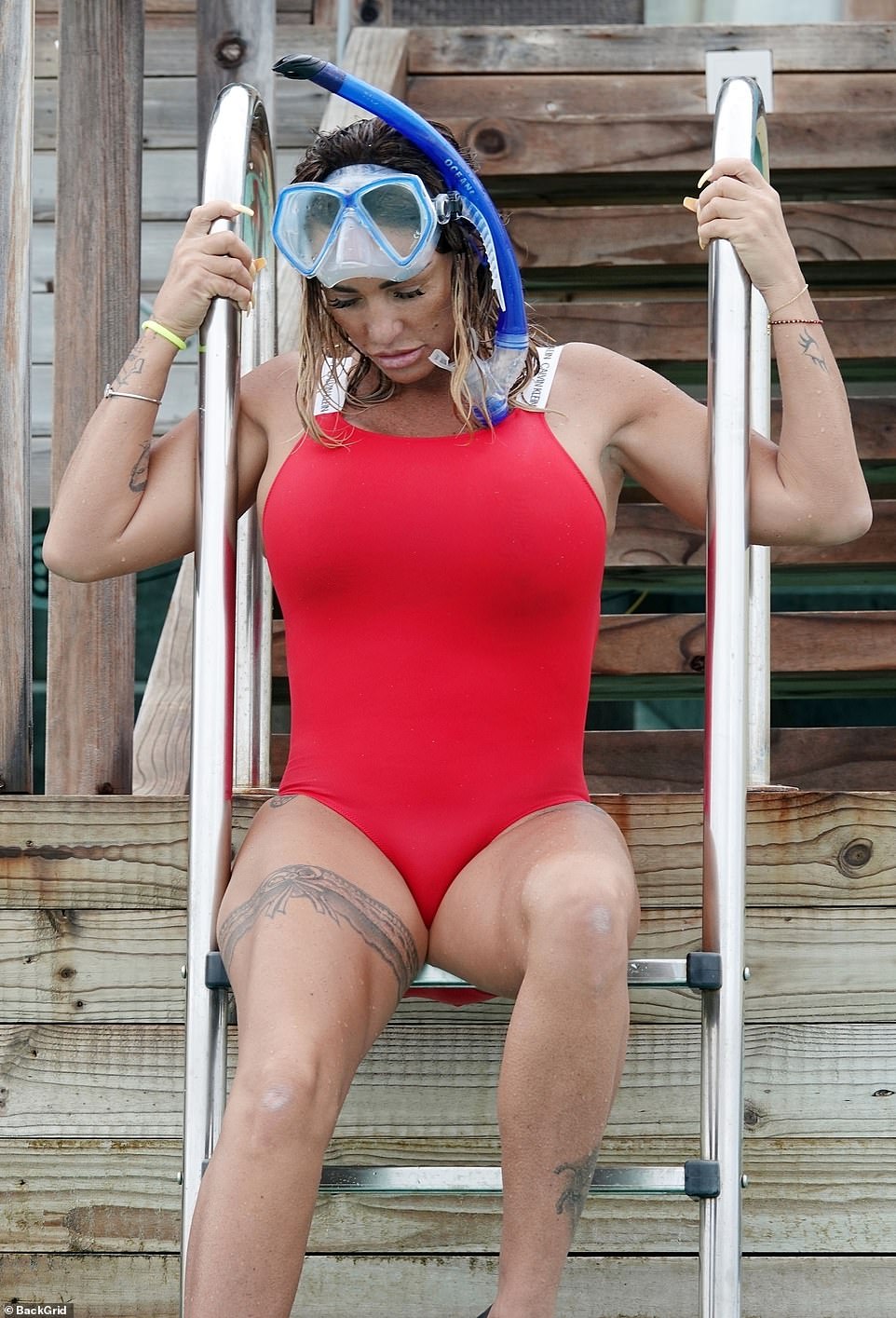 Katie’s representative told the publication: ‘Katie won’t be attending next week’s hearing in person, this is subject to location and under Covid regulations.’

The influencer, who was once worth more than £40million, was forced to give up her £1.3million 11-bedroom ‘mucky mansion’ earlier this year after signing the property over to a trustee.

The house in West Sussex, where Katie lived with her children, included a swimming pool, tennis court and horse stables.

The I’m A Celebrity star used to be able to fund her lifestyle through modelling, reality TV shows and fragrances when she was at the height of her fame in the 1990s and 2000s. 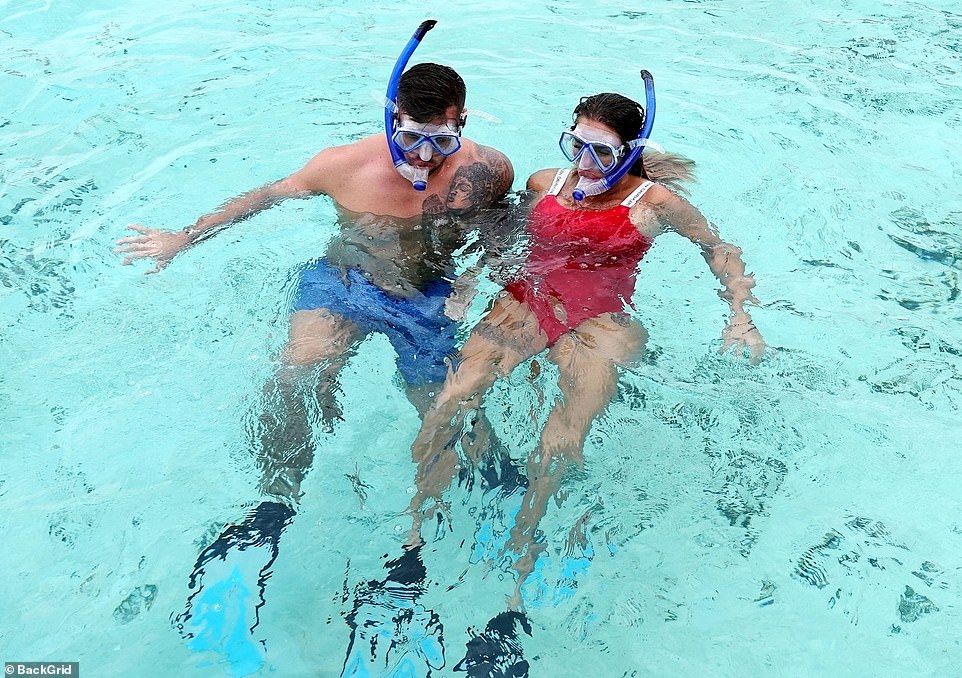 Fancy! The couple are staying at five-star resort You & Me Maldives, with rooms coming with a price tag of an eye-watering £1,400-a-night

But her only regular sources of income nowadays appears to be her Quest Red TV show My Crazy Life, her YouTube channel and plugging paid products on her Instagram account.

But she is currently loved-up with Carl, who has been looking after her while she recovers from surgery, following the end of her relationship with on-off beau Kris Boyson.

Earlier this month, the fashion designer confirmed she is trying for her sixth child as she shared the negative result of a pregnancy test in a YouTube video, saying: ‘We do want a baby and we’re not being careful.’

The TV star’s eldest son Harvey, 18, has multiple disabilities including blindness, Prader-Willi syndrome and ADHA. He does not have a relationship with his biological father, Dwight Yorke.