‘I love him so much’: Katie Price pays tribute to her fiancé Carl Woods as the couple celebrate their first anniversary in Turkey after star undergoes liposuction

Katie Price professed her love for her fiancé Carl Woods as the couple celebrated their first anniversary in Turkey where the reality star had lipsuction this week.

The former glamour model, 42, took to Instagram on Wednesday and shared a series of throwback snaps of the couple along with a gushing tribute to her partner, 32.

Alongside the post, Katie wrote: ‘1 year anniversary with my world @carljwoods absolutely perfect and love him so much ❤️❤️ Thankyou Ruby @the.pricey for doing this video I asked you to do ❤️.’ 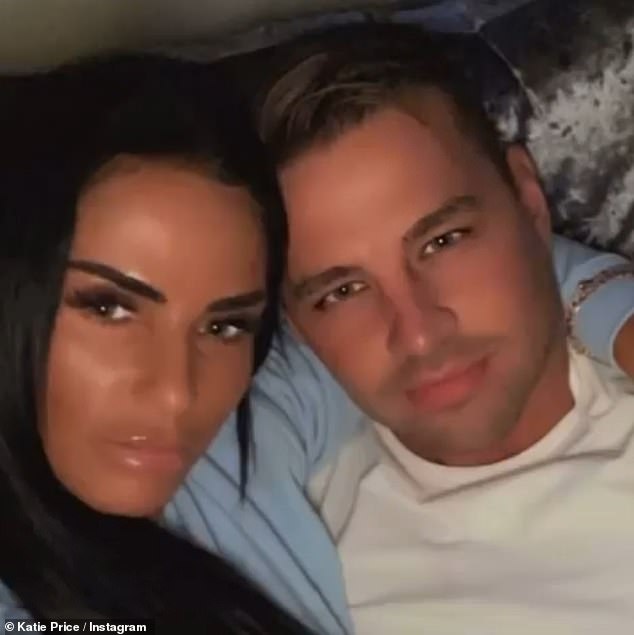 Romance: Katie Price professed her love for her fiancé Carl Woods as the couple celebrated their first anniversary together in Turkey

The snaps included several of the couple cosying up next to each other as well as snaps from their holidays to Turkey and the Maldives.

Carl shared a photo of the couple at a restaurant enjoying a good board and wrote: ‘1 year today almost to the hour, you flipped my world 360. I love you always. Happy Anniversary dolly @katieprice’.

The couple went on their first date following the first lockdown and have been together ever since.

Katie announced in April that the pair were engaged after Carl proposed just six weeks after Katie’s divorce from her third husband Kieran Hayler was finalised.

Love The former glamour model, 42, took to Instagram on Wednesday and shared a series of throwback snaps of the couple along with a gushing tribute to her partner, 32

Speaking to OK! magazine about their engagement, Katie said: ‘It’s refreshing to be with a man that if I decided I never wanted to work again, he’d look after me, I just love him.

‘We’d spoken about it a lot, so I knew he was going to, I just didn’t know when. It was amazing. Carl asked my mum and dad for permission – and Junior. With Carl, Mum’s already told him not to mess me around and so far he’s passed the t****r test.’

Katie added Carl isn’t interested in her fame ‘or anything to do with’ her alter-ego Jordan and has his own money.

It comes after Katie defended travelling to Turkey for liposuction, calling it a ‘work trip’. 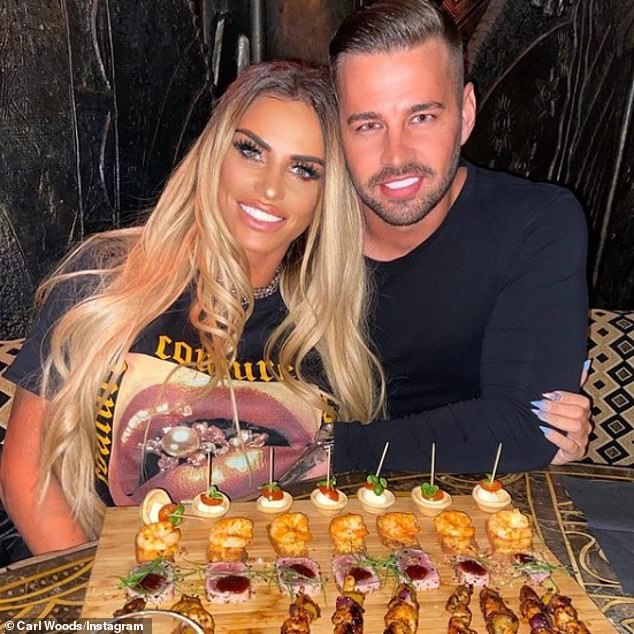 Tribute: Carl shared a photo of the couple at a restaurant enjoying a good board and wrote: ‘1 year today almost to the hour, you flipped my world 360. I love you always’

The mother-of-five went under the knife on Tuesday after gaining two stone in the past year, and is having the procedure filmed for her reality show.

Turkey is on the red list of countries, which the UK government says are at the highest risk from Covid, and should not be visited ‘except in the most extreme of circumstances’.

Foreign nationals are prohibited entry to the UK if they have been in any of the red list over the previous 10 days, and British residents must complete 10 days of hotel quarantine. There are limited exemptions for essential workers.

Now Katie – who flew to Turkey with Carl on Monday – has stated that filming the procedure for Katie Price: My Crazy Life, constitutes as an extreme circumstance, due to the fact it is a work trip, and her current weight has left her in physical pain. 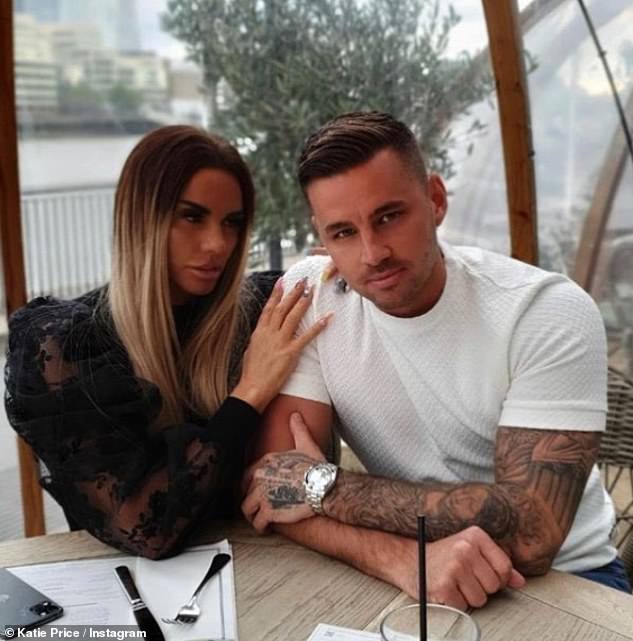 History: The couple went on their first date following the first lockdown and have been together ever since

A representative for the star told MailOnline: ‘Katie has travelled with her fiancé to undergo a surgical procedure.

‘The purpose of this travel is essential in that it is for her work, she is being filmed undergoing the operation.’

Katie broke both feet last summer after jumping off a 25ft wall while on holiday with her family, which has left her unable to do much cardio.

Touching on the incident, Katie’s rep continued: ‘Since her horrific accident in Turkey last year that left Katie with life changing injuries, Katie has not been able to exercise or lose weight gained post op in the way she has successfully done so in the past.

Hard at work: Katie recently defended travelling to Turkey for liposuction, calling it a ‘work trip’ (pictured with Carl at the airport on Monday)

‘Despite her efforts to lose weight she has gained over two stone – this in turn has put immense pressure and further strain on her feet and is directly affecting her walking and management of day to day as a mother of five without being in constant pain.

‘Katie accepts she is in a fortunate position to be able to undergo this procedure and would like to reassure in doing so is part of her “work”, in sharing her journey as she endures further emotional, mental struggles and challenges.’

Katie’s representative stressed that both the star, Carl and camera crew will stay in a mandatory quarantine hotel when they get back, costing £1,750 per person.

Katie has booked in for full body liposuction with Mono Cosmetic Surgery – the same clinic where a mother-of-three died in August after undergoing the same treatment.

Now and then: Katie has been unable to do much cardio after breaking both her feet over the summer and as a result has put on two stone (pictured right in January 2020) 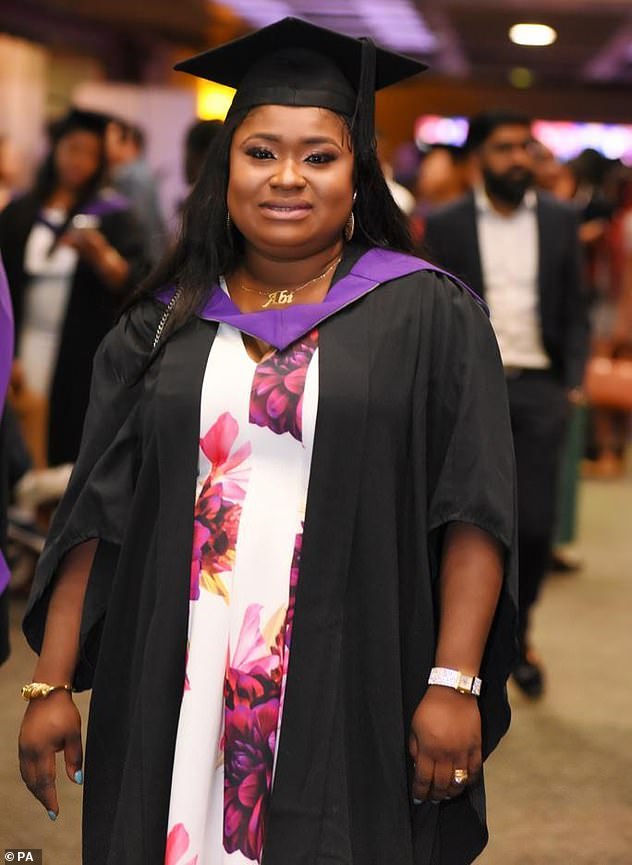 Tragic: Katie has booked in for full body liposuction with Mono Cosmetic Surgery – the same clinic where mother-of-three Abimbola Ajoke Bamgbose (pictured) died in August after undergoing the same treatment

Abimbola Ajoke Bamgbose, a 38-year-old social worker from Dartford, Kent, passed away after buying a £5000 overseas package deal including liposuction and a Brazilian Butt Lift.

The inquest heard that a post-mortem examination found that Abimbola suffered perforations to the bowel and a cause of death was given as peritonitis with multiple organ failure as a complication of liposuction surgery.

The hearing was told that such perforations were a rare complication in the UK, with about three to five cases in the past decade, but that it might be more common abroad.

WHAT IS LIPOSUCTION AND WHAT ARE THE DANGERS?

The procedure reduces the number of fat cells in a specific area. The amount of fat removed depends on the appearance of the area and the volume of fat.

There are a few ways of doing it.

The most common is ‘tumescent liposuction’:

If done in the wrong hands, liposuction can carry a number of risks, many life-threatening.

Patients can suffer heart problems due to a shift in fluid levels as fluids are being injected in and suctioned out.

Depending on the location of the operation, there could be a risk of puncturing an internal organ with the cannula.

Some botched operations have led to fat embolisms – when pieces of loosened fat might break away and become trapped in a blood vessel and gather in the lungs or travel to the brain.

They could tamper with nerves, causing permanent numbness in the affected area.